In Round 2 of The Fast And The Fratelli, two writers go head-to-head with their qualifying racing chronos!
Ben & Lex
comments 38
Share
Rolex
Chopard

It’s time to burn rubber in Round 2 of The Fast And The Fratelli. You voted, you voiced your opinion, and now two watches have been eliminated from the race. Two qualifying racing chronographs from Round 1 are warming up their tires for a head-to-head shoot-out. This time, we pit two writers against one another for the knockout stage. Who will win? You decide! So, buckle up, get voting, get sharing, and most importantly, get commenting for your chance to win a Traxxas Bandit RC car.

Before we drop the clutch, let’s back up to round one. Lex gave us the first taste of things to come with his choice of the Chopard Mille Miglia and the Singer Reimagined Track1. They were two good options of racing chronographs that perfectly encapsulate what this competition is all about. The voting was tight, but in the end, the Chopard Mille Miglia edged ahead with 59% of the votes. While the Singer has an innovative and beautifully decorated movement developed by Agenhor, you cannot beat a classic blue dial with a dash of racing red. You said it yourselves in the comments, Fratelli — the legibility of the Mille Miglia’s functions is unbeaten. With the Track1 prioritizing the chronograph functions, it sacrifices the importance of telling the time. To the victor go the spoils, and the Mille Miglia claims a spot for round two. 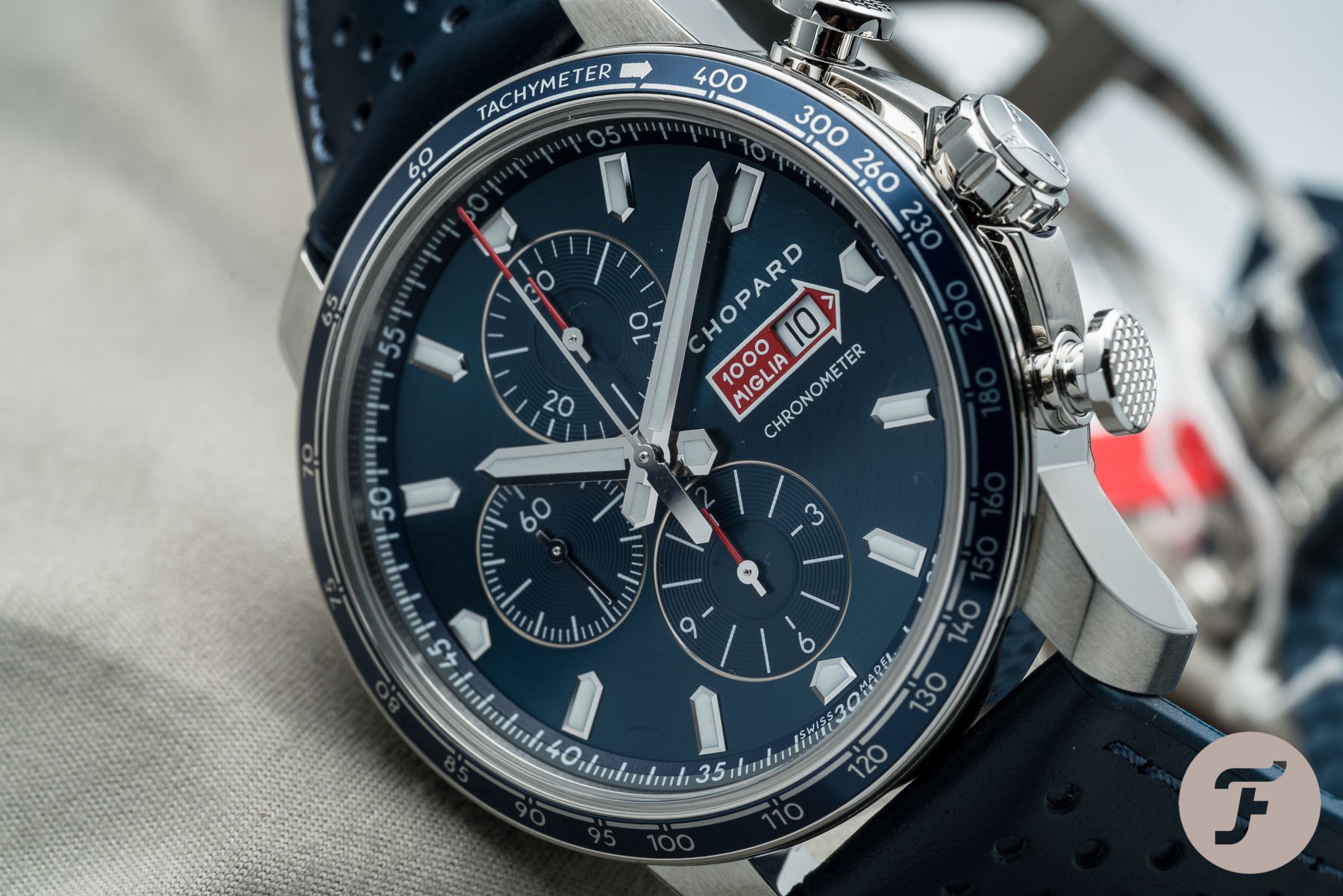 The Fast and the Fratelli: Rolex Daytona Vs. Chopard Mille Miglia

By comparison, Ben’s winning pick was far more decisive. The Richard Mille 50-03 has a fascinating case construction, a superb movement, and unparalleled attention to detail. But it was the ’60s pin-up Rolex Daytona that emphatically won Ben’s round. The near 100× price difference was a prominent talking point, but it seems even the RM’s styling is not to the Fratelli’s liking. Clearly, with 84% of the voting share, the Daytona is still the racing watch icon. But will the soaring price hike of pre-owned models hold it back from taking the checkered flag against the Chopard? Interestingly, the Rolex and Chopard watches are both named after famous automotive contests — the Daytona 500 and Mille Miglia endurance races. But let’s hand it over to Stolk and Hodges to duke it out. 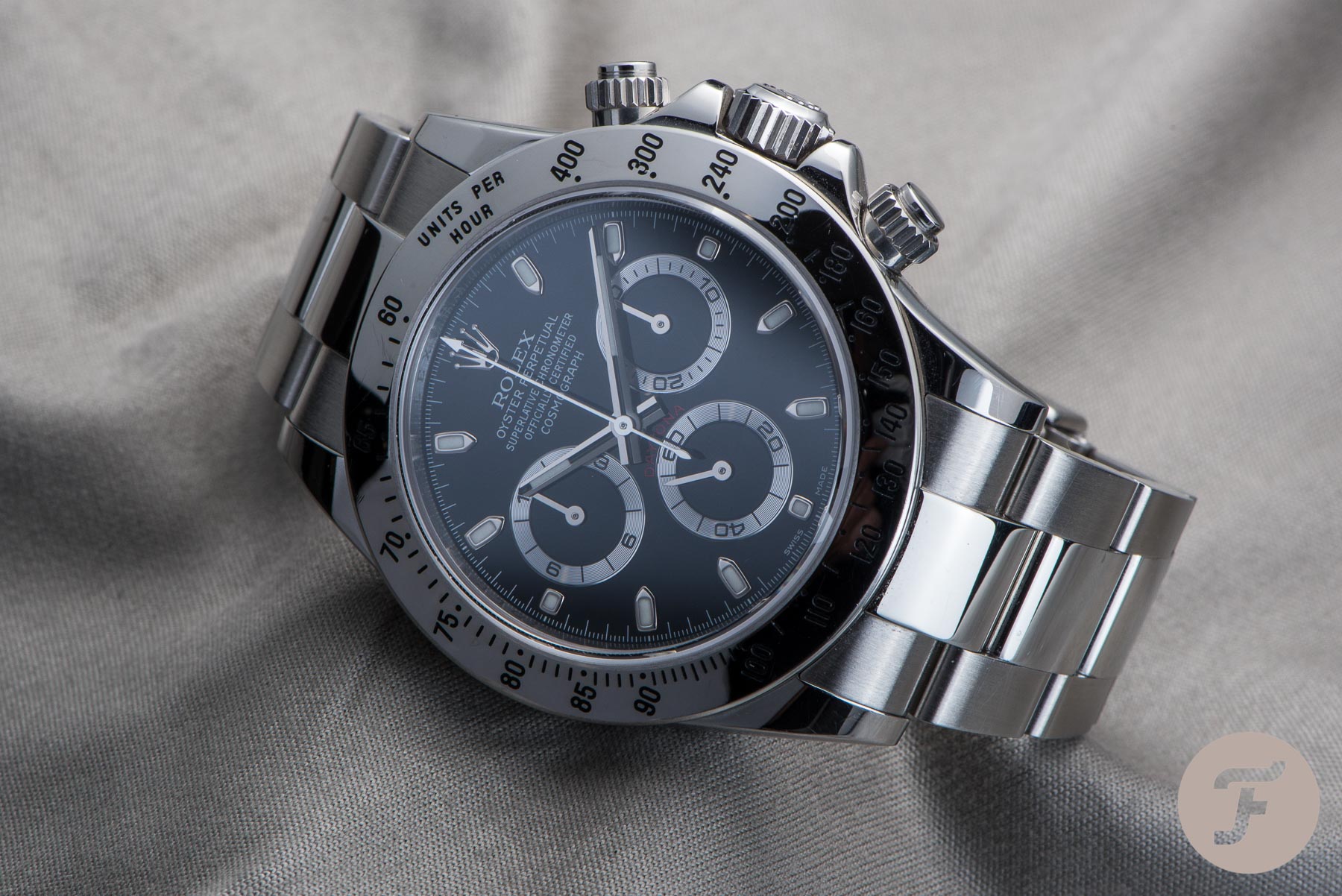 Going into this latest Fratello Watches tournament, the Daytona was surprisingly a last-minute choice. Sometimes, in our haste to feature the left-field options, the apparent picks pass us by. But with the disqualification of the TAG Heuer Monaco by not having a tachymeter, the Rolex Daytona swooped in to take its place. The most challenging decision was which Daytona reference. The 116500LN has an up-to-date, scratch-resistant Cerachrom bezel. But with its punchy, bold styling, it veers away from the original reference 6239 from 1963. The 116520 was the last generation with the steel bezel before the 2016 update. And while I may be bending the rules since the 116520 came out in 2000, this particular model has the updated Oyster clasp, signaling its post-2011 release. 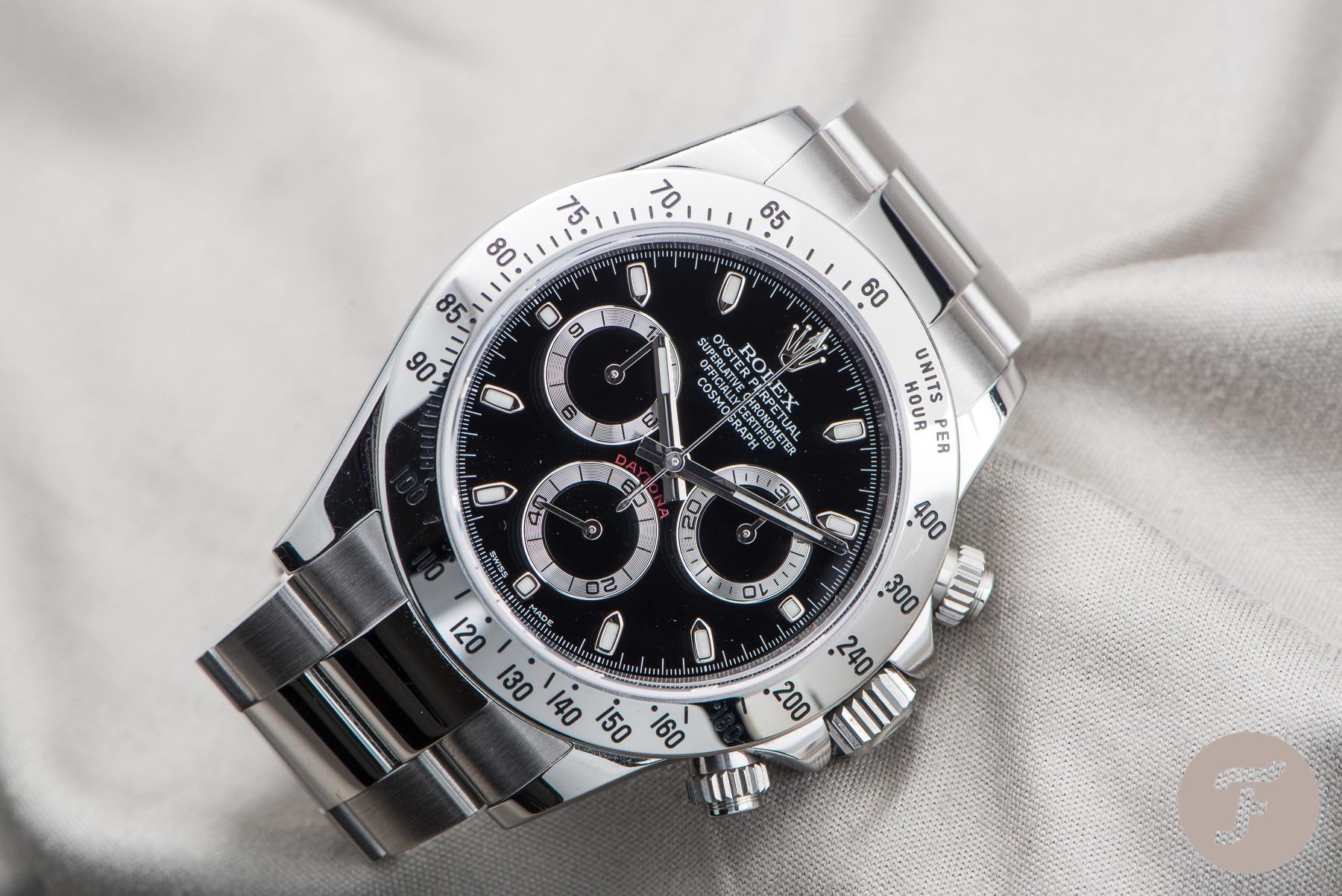 I can give many reasons why the Daytona is ideally suited to a day at the track. But Fratelli member Moustachio gives us a brilliant summary of the Rolex’s key attributes:

Thank you for the comment, Moustachio. I want to bring up one part of this quote — “it’s the right size.” It’s interesting, as the official dimensions from Rolex claim the case is 40mm. Well, I have it on my wrist right now, so let’s see. With precise Mitutoyo calipers, the case measure 38.5mm across the bezel (from 9 to 3 o’clock). Ignoring the crown, pushers, and guards, this is the widest part of the case. Even measuring the more awkward 10-to-4 o’clock span, which includes a bit of lug, only takes it to 39mm. 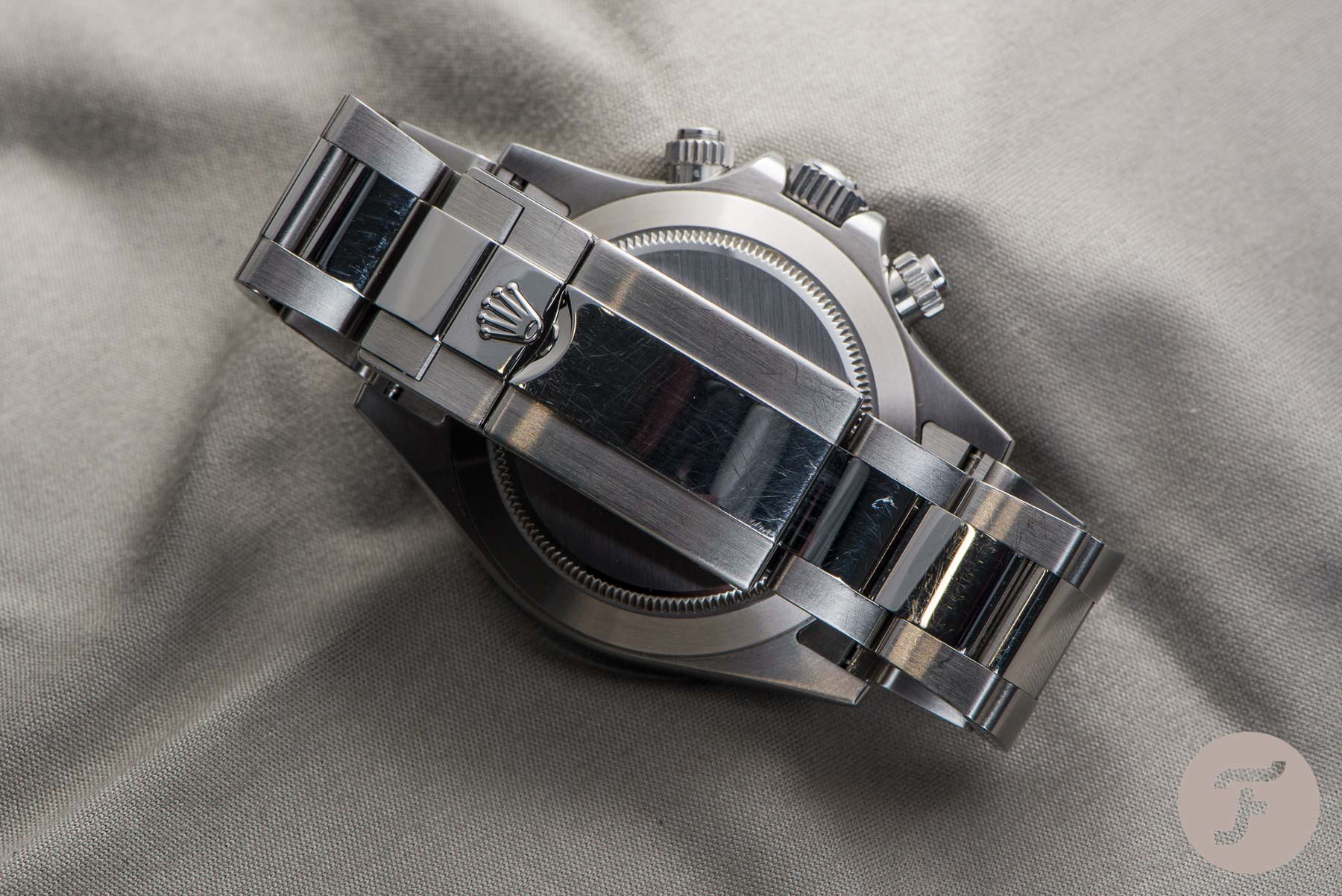 Leaving nothing to the imagination

This overestimation of the case diameter tends to throw people, surprised at how much smaller the Daytona wears than the specs suggest. Contrast this to Omega including two decimal places in its diameter specs, as Rob pointed out in his round one heat. But random rounding up or down of dimensions plays into the allure and mystique of Rolex. The brand wants you to experience these watches, and Rolex still holds on to this old idea of product “surprise and delight.”

The term is seldom seen these days — with everything from watches to cars to toasters being meticulously dissected and divulged only one click away. Rolex leaves its watches open to interpretation by wildly approximating specifications, with most reviewers defaulting to the PR-provided details. Eventual owners appreciate the feeling of knowing something about their watch that onlookers are oblivious to.

Chopard, by and large, saves nothing for a surprise. A quick look at the product page for Lex’s Mille Miglia is like reading CAD instructions. Everything listed, from the case height to the movement dimensions, sets your expectations long before you purchase. But I’ll let Lex get off the starting grid and put his foot down. 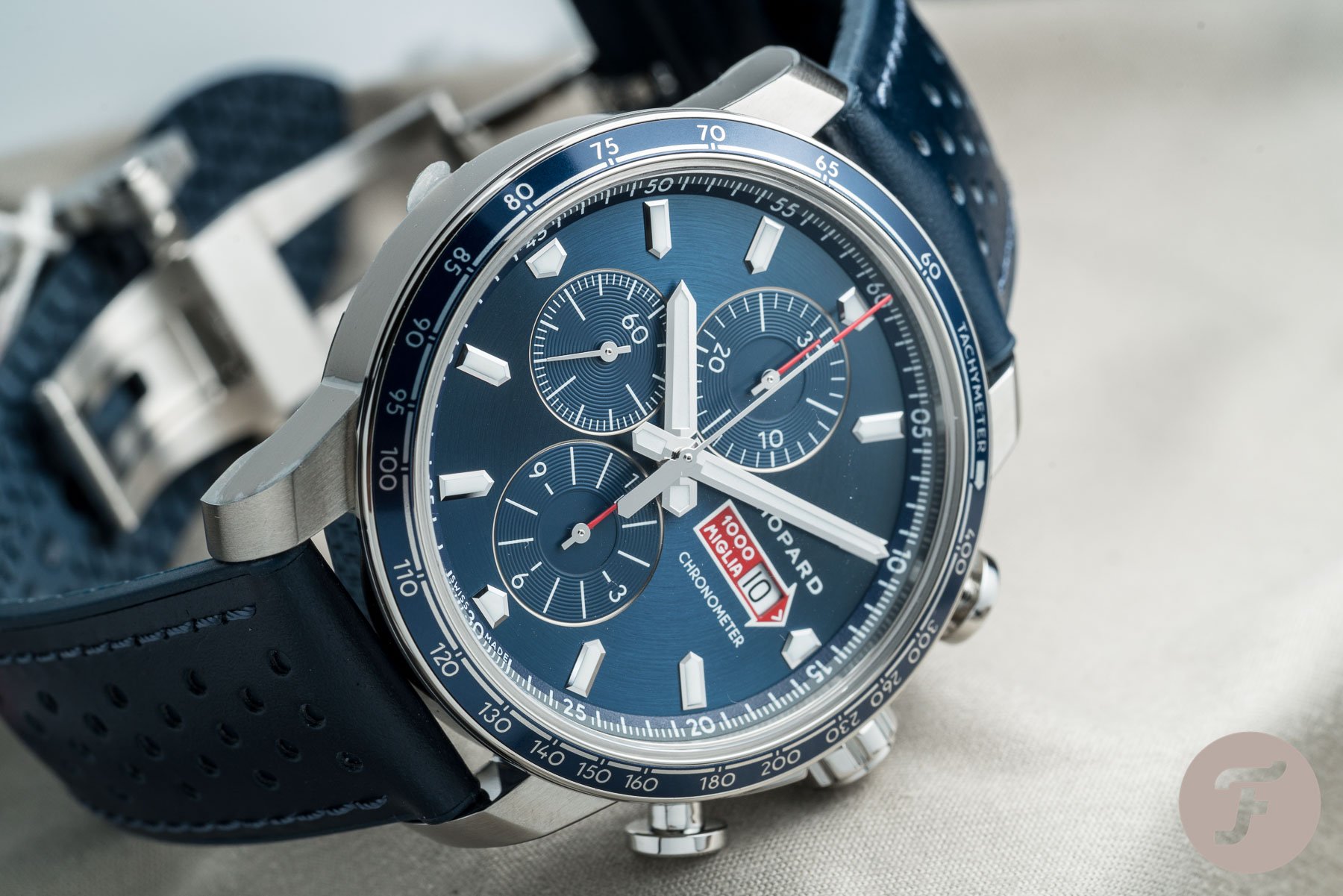 The Chopard Mille Miglia GTS Azzurro SS is a stylish giant slayer. Okay, the Singer Reimagined Track1 isn’t on the same level as the Daytona (it’s above it), and its movement is a complicated gem that normally outshines any Valjoux-based caliber it is compared with. But the Mille Miglia beat the Singer because of its well-established name, its panache, its heartwarming traditional appearance, and its blue dial with a touch of red, of course. A blue-dialed chronograph — is there anything more appealing? Don’t answer that. Not just yet. Let’s have a closer look at a chronograph from the instantly popular Mille Miglia collection that takes on a watch not a single soul wanted when it came to the market. 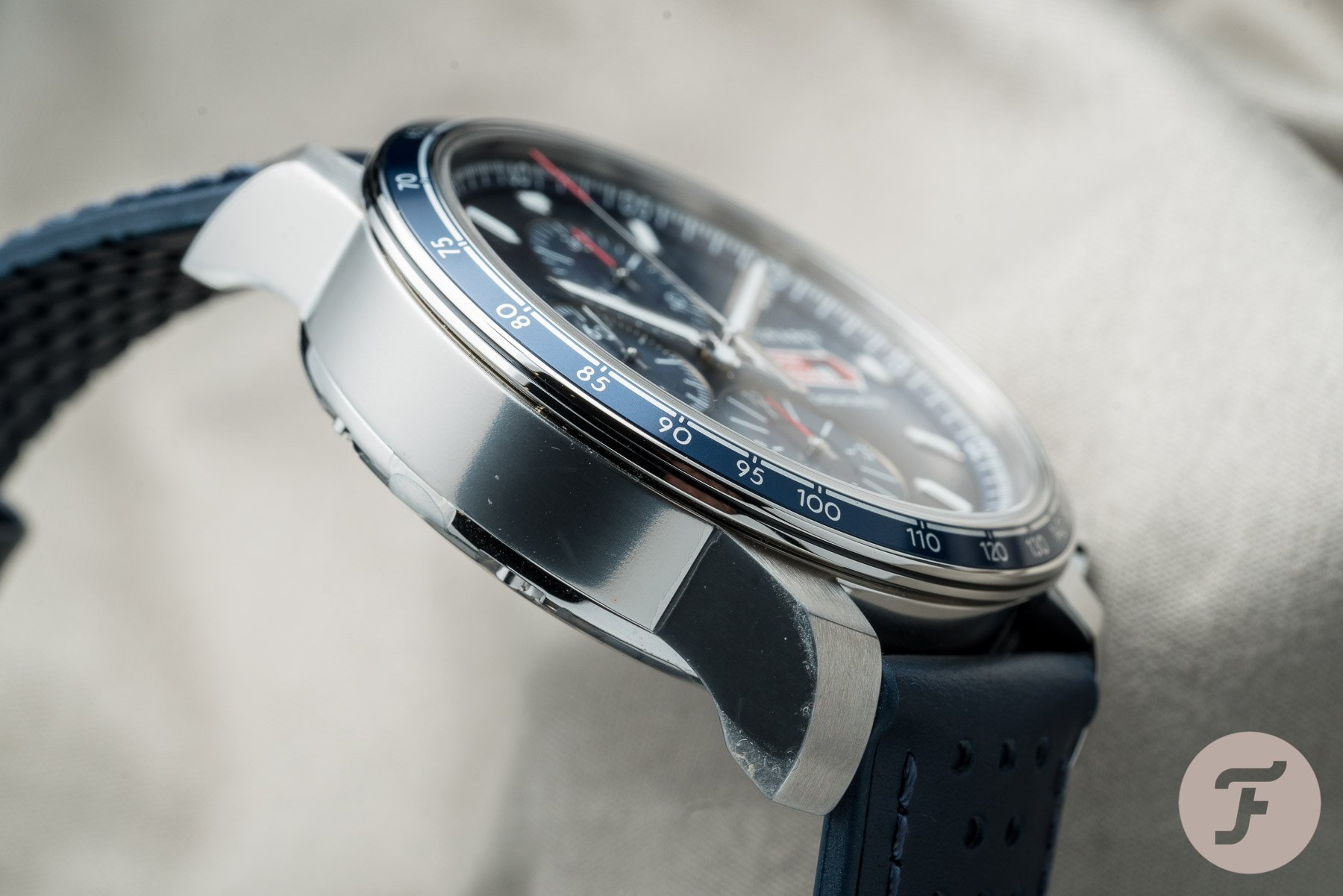 Who needs a Daytona anyway?

Nowadays, everybody wants a Daytona. It’s a watch Rolex dealers use as an incentive to buy a Day-Date. But back in the day, you couldn’t give those things away. Nobody wanted a chronograph from Rolex with so many other chronographs from a variety of well-established brands already on the market. The Daytona only became popular because of some movie star who pretended to be a race car driver. So it was people without a style of their own, copying a movie star who wanted to be someone else. The Daytona is an accidental hit, worn by people who lack personality. That’s how I look at the matter. 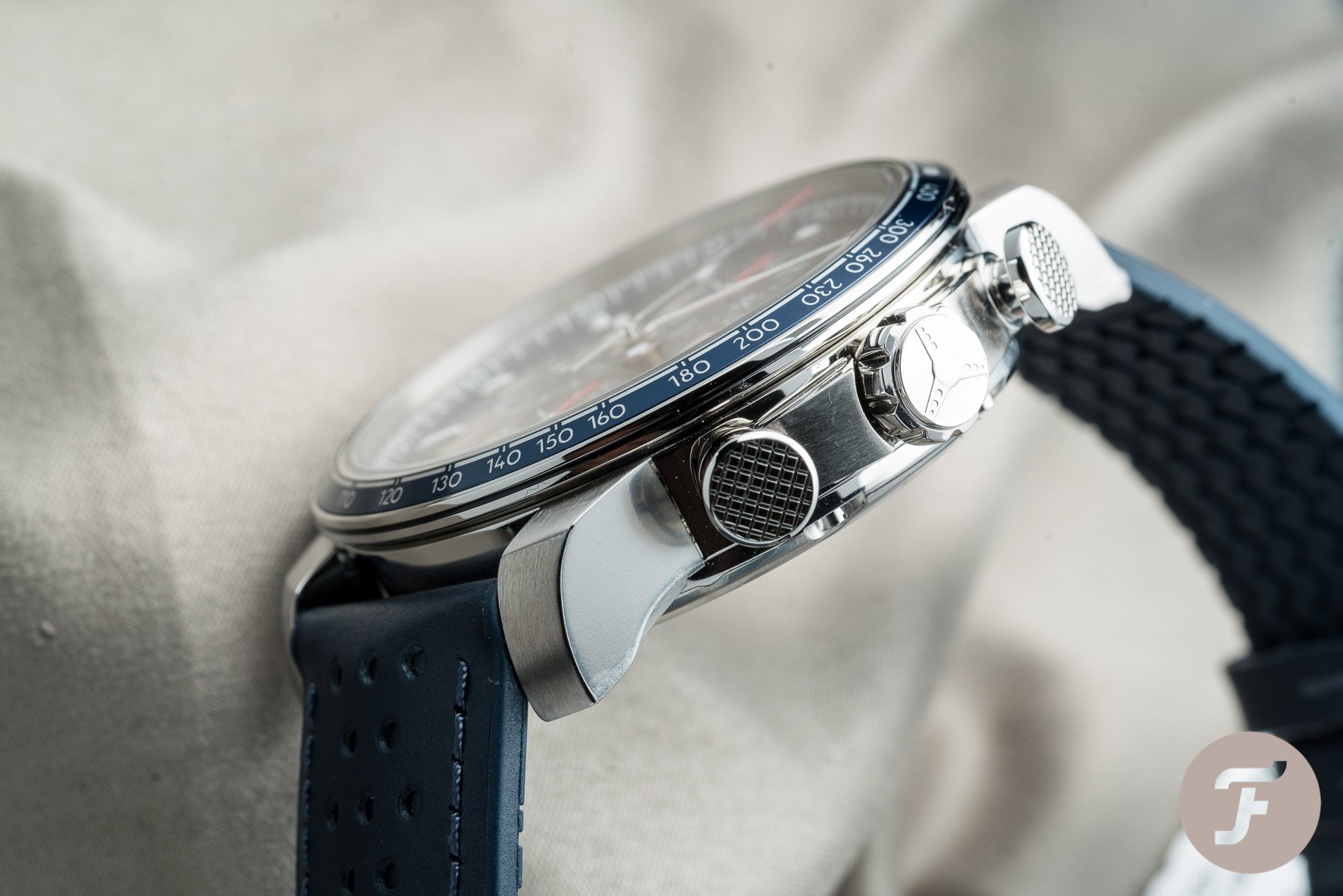 The Chopard Mille Miglia GTS Azzurro SS, on the other hand, is a watch worn by people with a mind of their own. People who don’t need validation from others. People who can appreciate the finer things in life. Classic race cars, for instance. Since 1988, Chopard has acted as the official timekeeper of the classic Mille Miglia, the ultimate rally for historic cars. Over the years, that has yielded a huge amount of race-inspired watches. Almost without exception, they are stylish pieces, and the most attractive ones are usually chronographs. They are chic and rugged, sporty and sophisticated, and the official watches of the classiest race in Italy. What else would you expect? 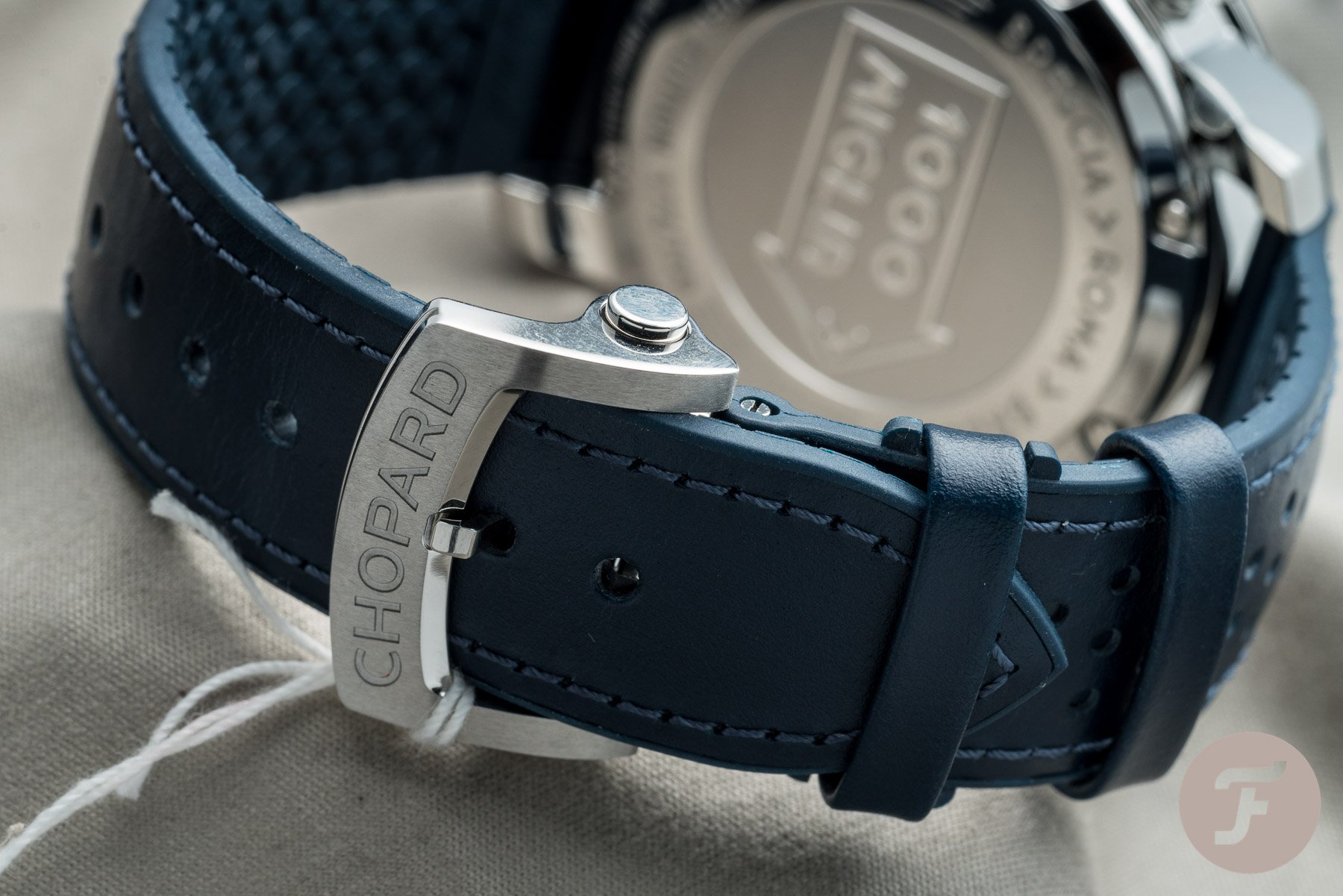 I could have picked a number of Mille Miglia chronographs to compete in The Fast And The Fratelli. In the end, though, I picked the GTS Azzurro Chrono (168571-3007) with its 44 × 13.79mm steel case. Not particularly because it’s a limited edition of 750 numbered pieces — exclusive but not overly so — but rather, because of the azure blue dial that captures the Italian spirit of the Mille Miglia in perfect style. And also because of its not-overblown €7,360 price. What you get for the money is a stout, well-groomed watch. Just look at the ton-sur-ton sub-dials that blend in without sacrificing readability. The most frivolous detail on the dial is the date window inside the Mille Miglia racing-flag logo. It adds even more flair to a watch that oozes class. 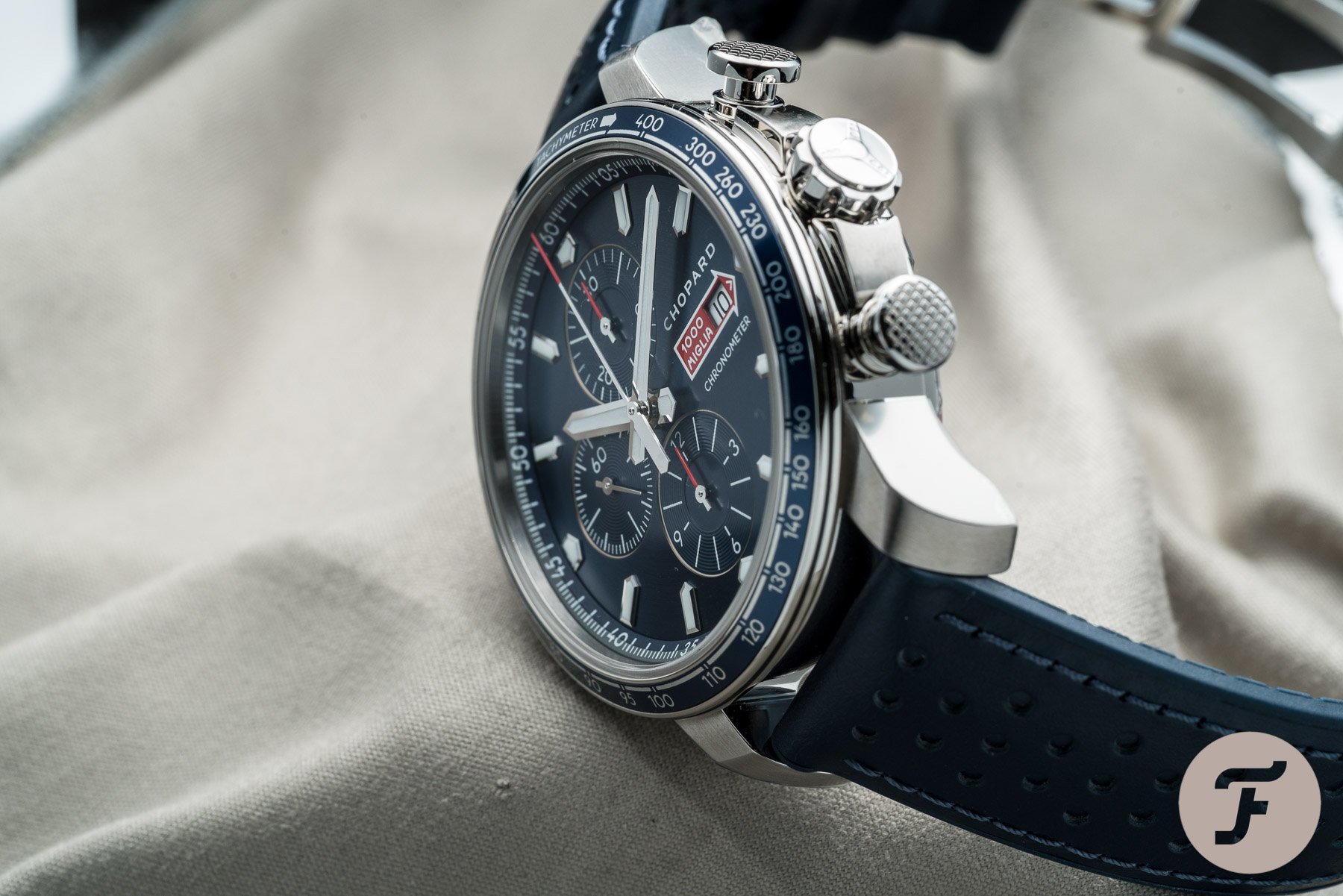 Another nice detail is the perforated blue leather strap with a rubber lining showing a 1960s Dunlop tire pattern. The folding clasp even adds a bit of luxury. Under the “bonnet” of the Mille Miglia GTS Azzurro Chrono beats an automatic, finely tuned ETA movement. The 10-bar water-resistant steel case makes sure this COSC-certified chronometer “motor” can perform in almost every condition. If you’re looking for a do-it-all gentleman racer’s chronograph pur sang — and I guess that you are if you’re reading this — the Chopard Mille Miglia GTS Azzurro Chrono is THE watch for you.

Be true to yourself and listen to your heart. Dive deep into the azure blue of the dial, and drive away with the Chopard Mille Miglia GTS Azzurro Chrono.

I used the words “frivolous” and “flair” before to describe the Mille Miglia GTS Azzurro Chrono. Ben didn’t use these words, because in the case of the Daytona, they don’t apply. Far from it. The Mille Miglia is a watch you wear for pleasure, your own pleasure, dear Fratelli. The Daytona, on the other hand, is one you wear because you think you have to. You wear it because of peer pressure or whatever other reason outside of yourself. Be true to yourself and listen to your heart. Dive deep into the azure blue of the dial, and drive away with the Chopard Mille Miglia GTS Azzurro Chrono. Andiamo!