The Fast And The Fratelli — Shootout Round: Lex’s Seiko SRQ029 Vs. Dave’s Fortis B-42 Cosmonauts Chronograph

The race is well underway in Round 2 of The Fast And The Fratelli. You voted, you voiced your opinion, and a number of watches have been given the black flag, thereby disqualifying them from the race. Two racing chronographs that continue to speed ’round the Fratello Watches International Speedway are Dave’s Fortis B-42 Cosmonauts Chronograph and Lex’s Seiko SRQ029. And now, these watches are battling it out in a head-to-head shootout. You decide the winner by voting. And by commenting, you have a shot to win a Traxxas Bandit RC car.

In the chaotic opening round, you saw two very original chronographs of choice from Dave go head-to-head. In the end, the space-worthy Fortis B-42 Cosmonauts Chronograph beat the carbon-clad Bamford B347 mono-pusher chronograph. That was some close racing. Who would have thought that a clunky — excusez le mot — Cosmonaut would take the checkered flag just in front of a lightweight racer made of high-tech, forged carbon fiber? Lex’s pairing of a voluptuous Cartier Roadster Chronograph and a Seiko SRQ029 was a clash of styles.

The Seiko is quicker around the corners, but the Fortis is rocket-fast on the straight …

In the end, functionality beat unusual design — an outcome that was easy to predict. Predicting the outcome of a race between Lex’s Seiko SRQ029 and Dave’s Fortis B-42 Cosmonauts Chronograph, however, looks like it will be way more tricky. The Seiko is quicker around the corners, but the Fortis is rocket-fast on the straight, as you would expect. Let’s race! 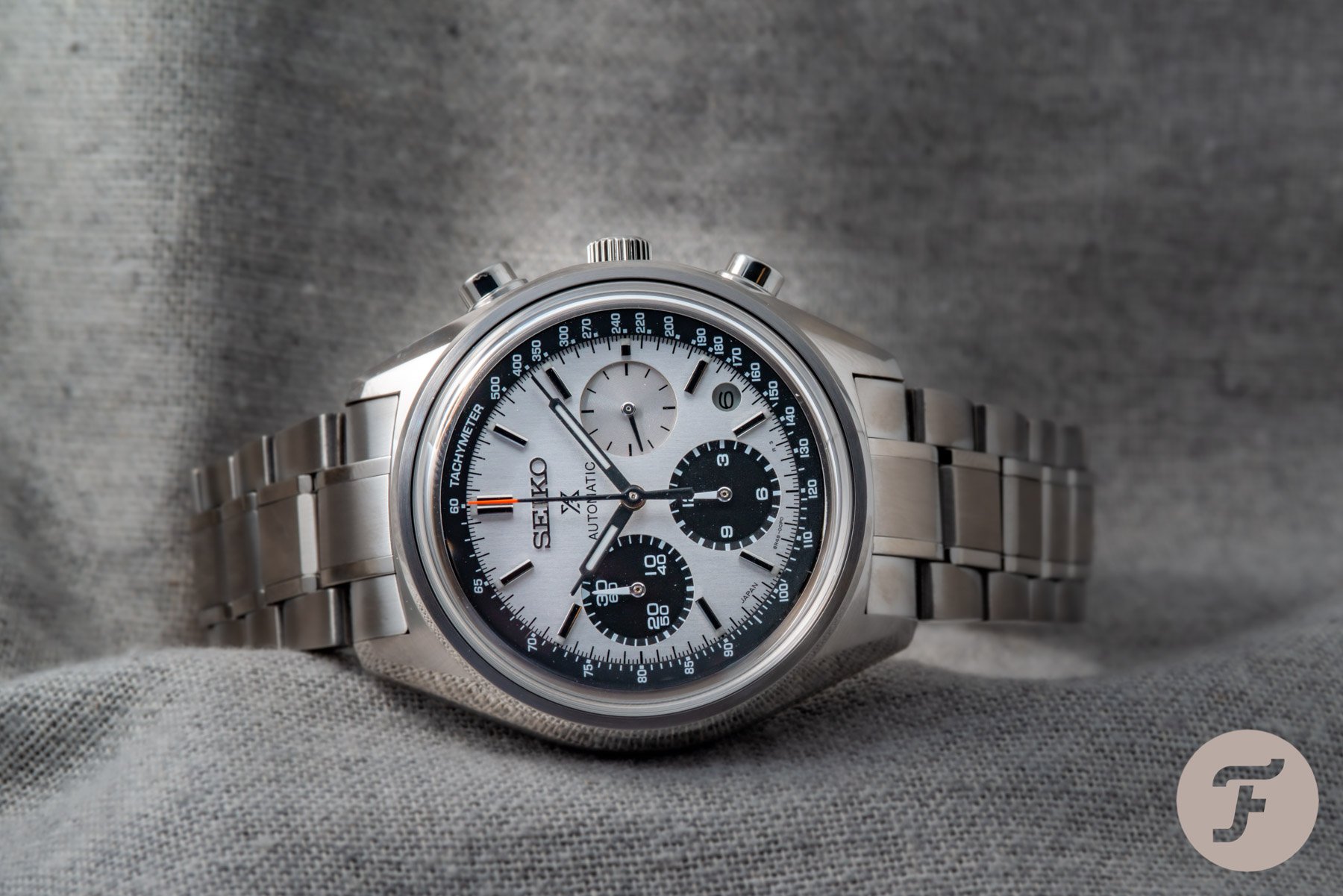 When I put the Seiko SRQ029 on the track, I compared the watch to a 1970s Toyota race car. This Toyota 7 was a Group 7 monster with an open cockpit, powered by a 3-liter 61E V8. The retro-inspired Seiko beat the watch equivalent of a Matra-Simca MS670 with a howling V12 under the hood. And now it’s up against a Fortis Cosmonaut, the watch equivalent of a 1.1-liter Lada Samara… Anyway, better not leave anything to chance, since tortoises sometimes beat hares, apparently. My Automatic Chronograph 50th Anniversary Limited Edition, or SRQ029 for short, is a 2019 watch that was released to celebrate the 50th anniversary of the well-known caliber 6139, a very historically significant movement. 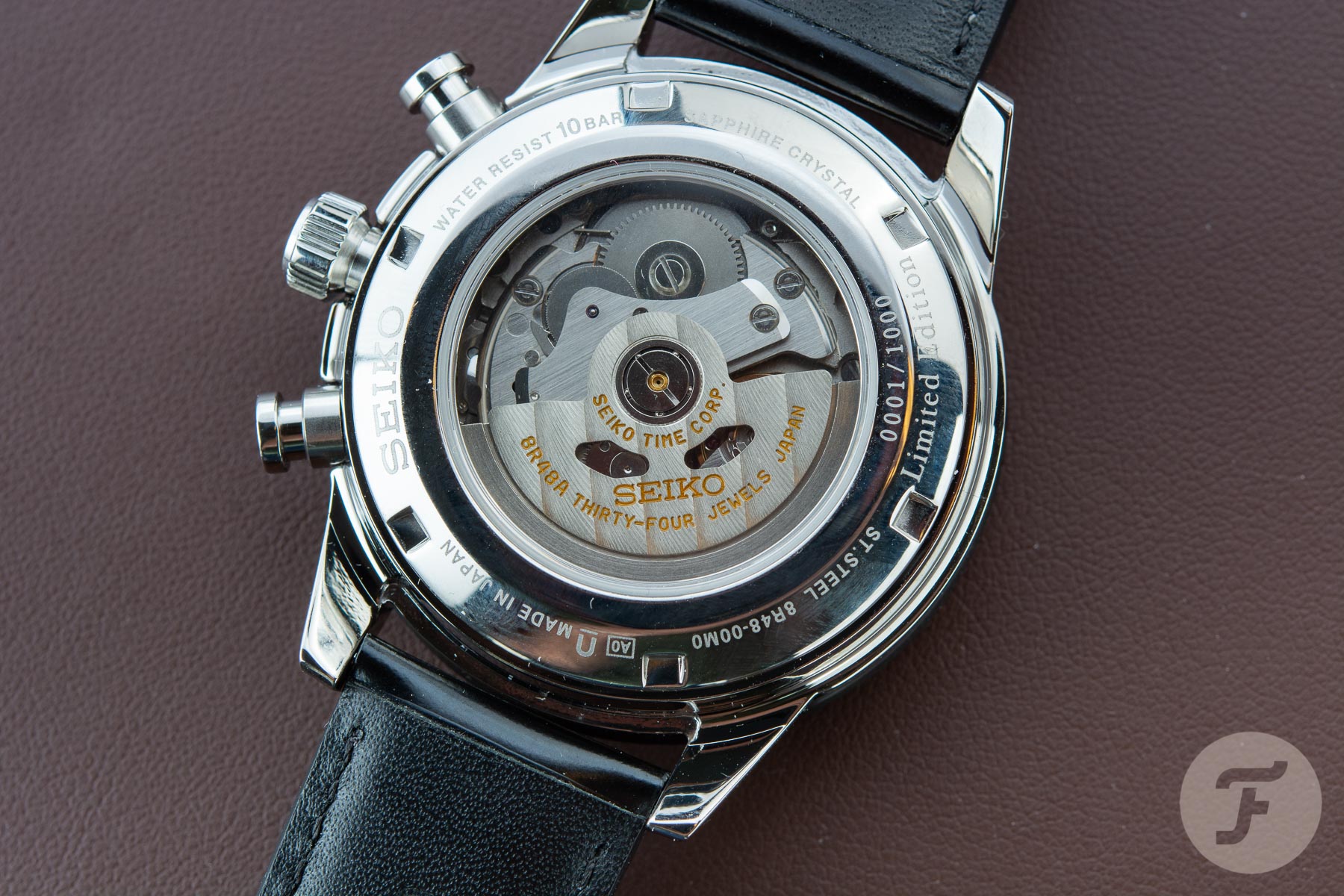 The caliber 6139 has been of great influence on Swiss chronograph movements. And it also is the great-grandfather of the caliber 8R48, which beats inside the 100m water-resistant case exhibition case of the SRQ029. This 34-jewel movement has a claimed accuracy of +25 to -15 seconds per day and a power reserve of approximately 42 hours. The 4Hz caliber 8R48 also has a vertical clutch and a column wheel, just like the ground-breaking 6139. Furthermore, the new movement uses a three-pointed hammer and a heart-shaped cam to synchronize the hands’ reset function. Yes, it’s quite the “engine.” It’s a proper thoroughbred compared to the (too) often-used, standard “motor” you will find in Dave’s Lada later on. 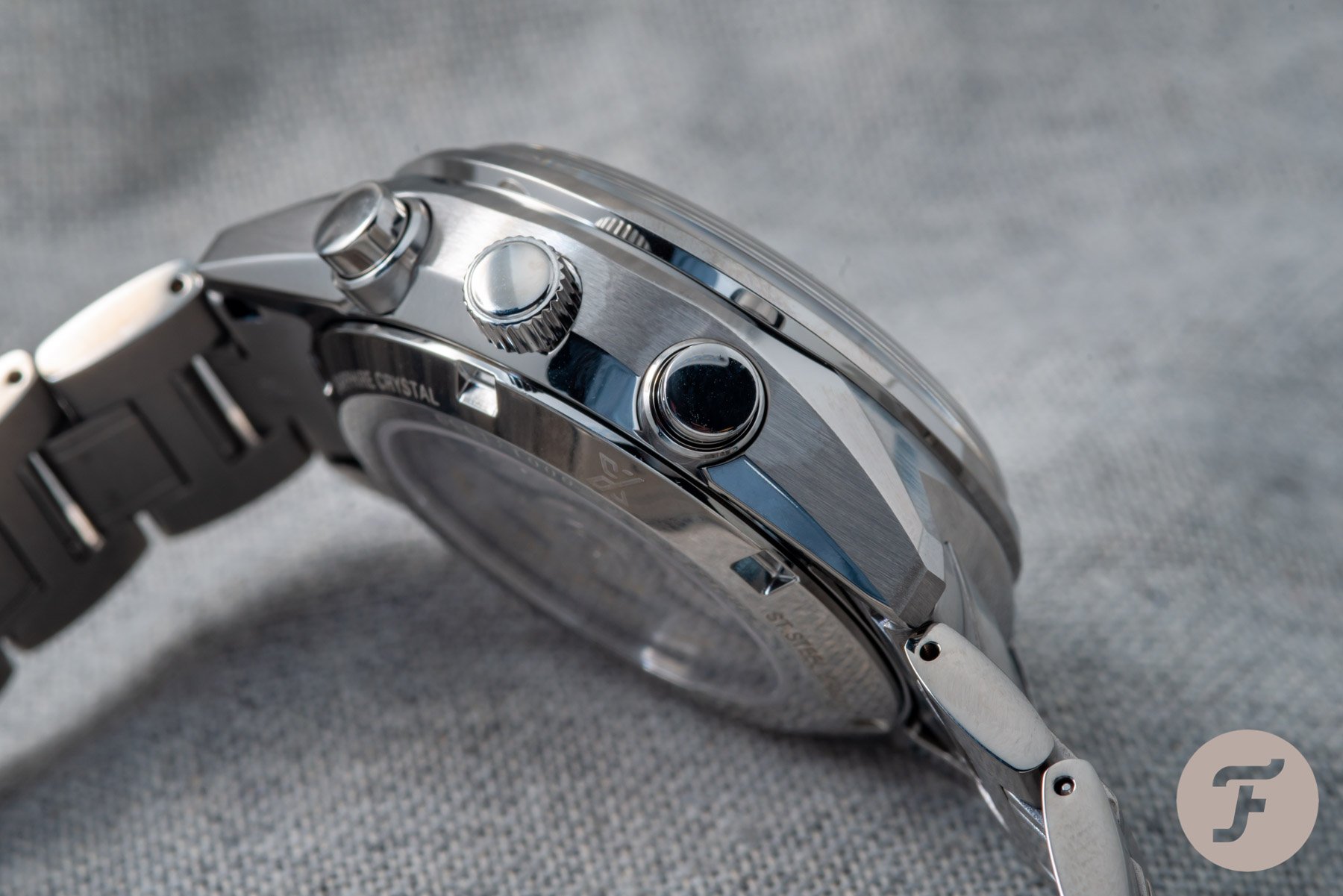 When it comes to the exterior, the Seiko SRQ029 is quite something, too. The 2019 watch is based on the looks of the 6138-8020 “Panda”, one of the most beloved and collectible vintage Seiko models out there. The panda-style dial, under the box-shaped sapphire, shows the same delicate vertical brushing as the original 6138. Imagine this, if you can: when the 6138 appeared futuristic case shapes were all the rage. Presenting a “Panda” with a more conventional round case could have even been considered experimental at that time. But it’s an experiment that is still exciting today. The SRQ029, a modern reinterpretation with Zaratsu polishing on its 41 × 16mm steel case, is living proof. 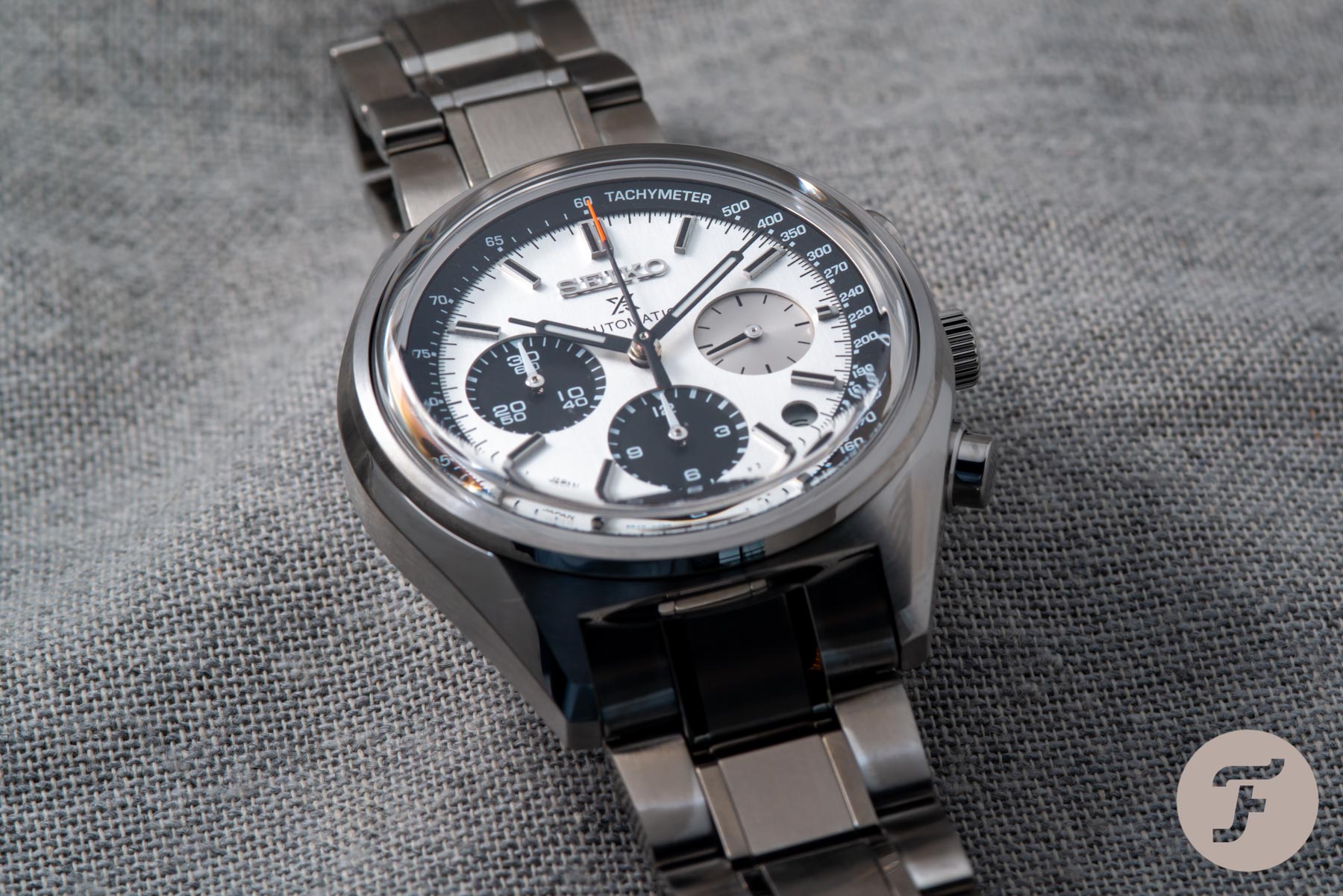 Much more than just retro

The experiment with the round case has stood the test of time like a dream, although the super-hard coating could well play a role in that too. To round things off in the most solid way, I have to bring the steel bracelet with a deployant clasp and push-button closure to your attention. It wears comfortably and it looks the part — a job that may seem easy, but surely is not. The SRQ029 evokes the original watch through the use of a black chapter ring, the shape of the hands, the orange tip of the chronograph second hand, the hour markers, and the tachymeter bezel inscriptions. But the SRQ029 — a limited edition in the Prospex collection of 1,000 pieces with a price of €3,700 — is also a natural evolution and a successor of the 6138-8020 “Panda.” It’s a timeless future classic that speaks for itself. And you can speak too by voting for the Seiko SRQ029. 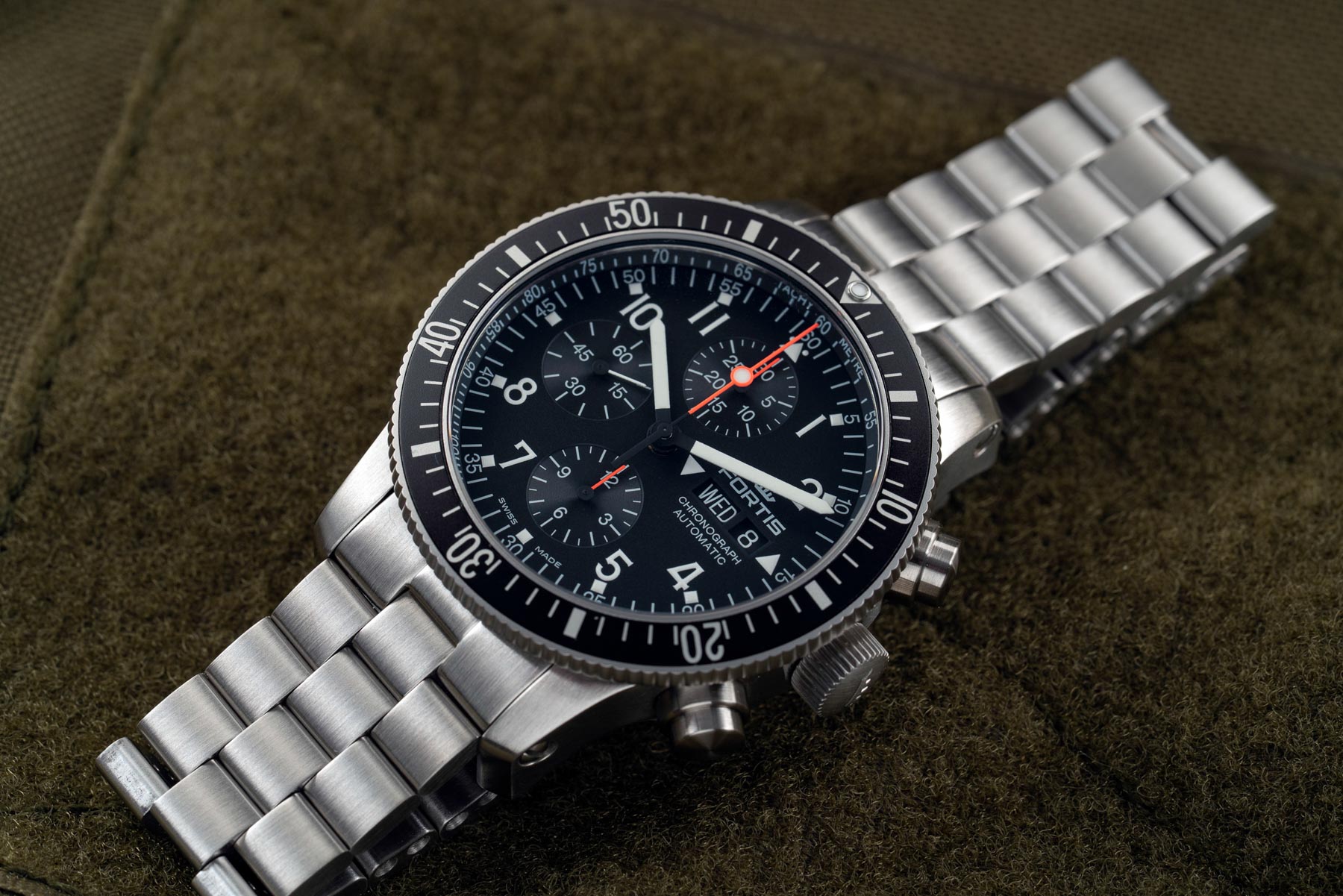 I must admit, I am pleasantly surprised to see the Fortis make it through to this round. Surely, I thought the Fratelli would be swayed by the super-slick contender that was the Bamford Chronograph. I had to remain impartial, as both were my entrants into The Fast And The Fratelli, but it was nice to see that you voted with your hearts and substance triumphed style. I would have been happy with either result, but this is probably the sensible one. Now, our noble Fortis has a new contender in the form of Lex’s Seiko SRQ029. That said, with all due respect to Lexy, the Fortis should batter the Seiko if we stick to the mantra of “substance over style.” 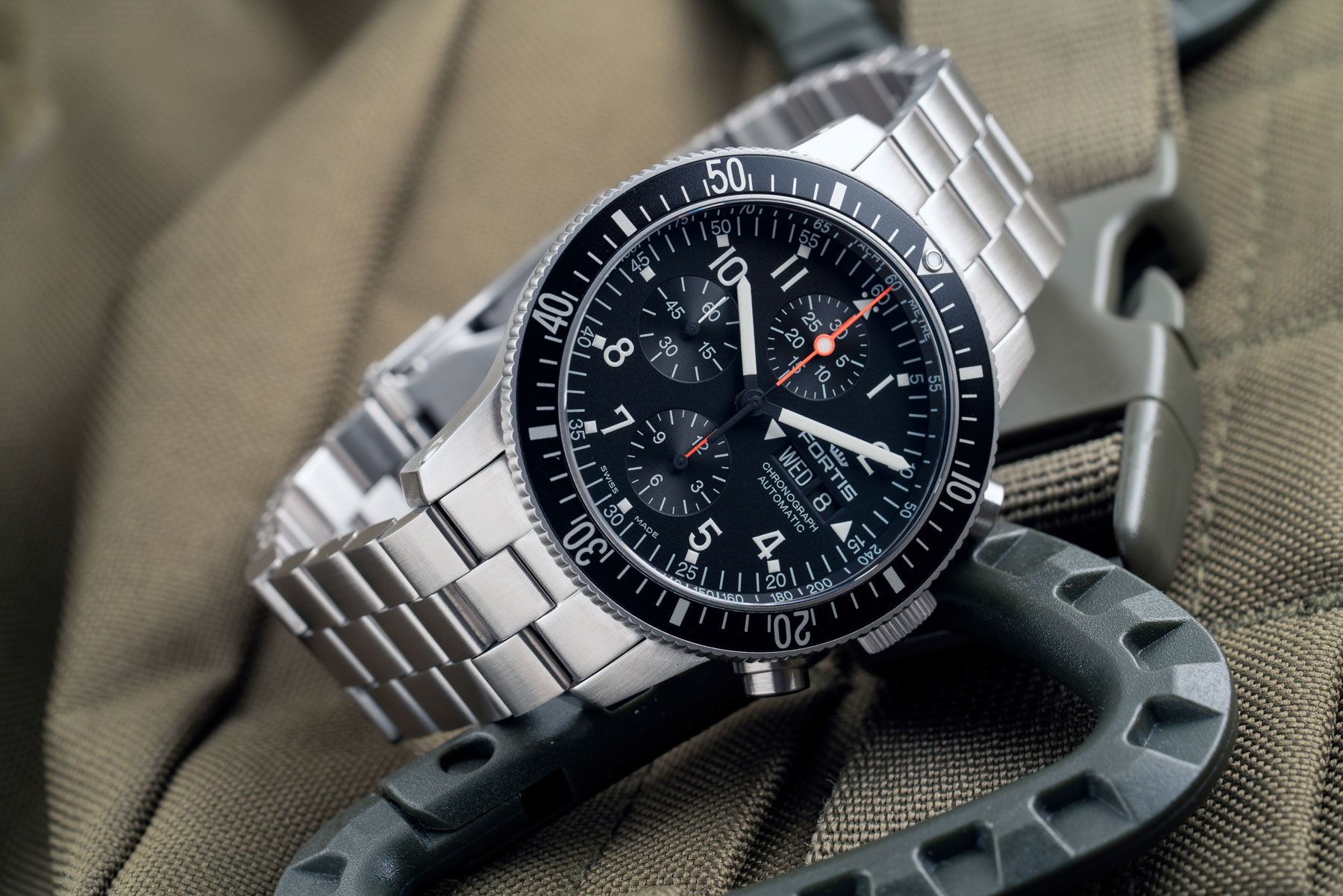 Built for the job at hand

As we established, the Fortis B-42 Cosmonauts Chronograph is one of the purest manifestations of a modern-day tool watch I can think of. This bad boy does everything. Sure, it’s a watch for the intrepid Russian ROSCOSMOS astronauts, but that only means it’s overqualified for the job, rather than just satisfactory. Elapsed time bezel? Check. Chronograph? Check. Tachymeter scale? Check. It’s even water-resistant to 200 meters. There’s not much this watch cannot do. It certainly outperforms the Seiko SRQ029 in all tests. Fortis prides itself on building tool watches, and the B-42 Cosmonauts Chronograph is just that. It’ll serve you well in any situation. 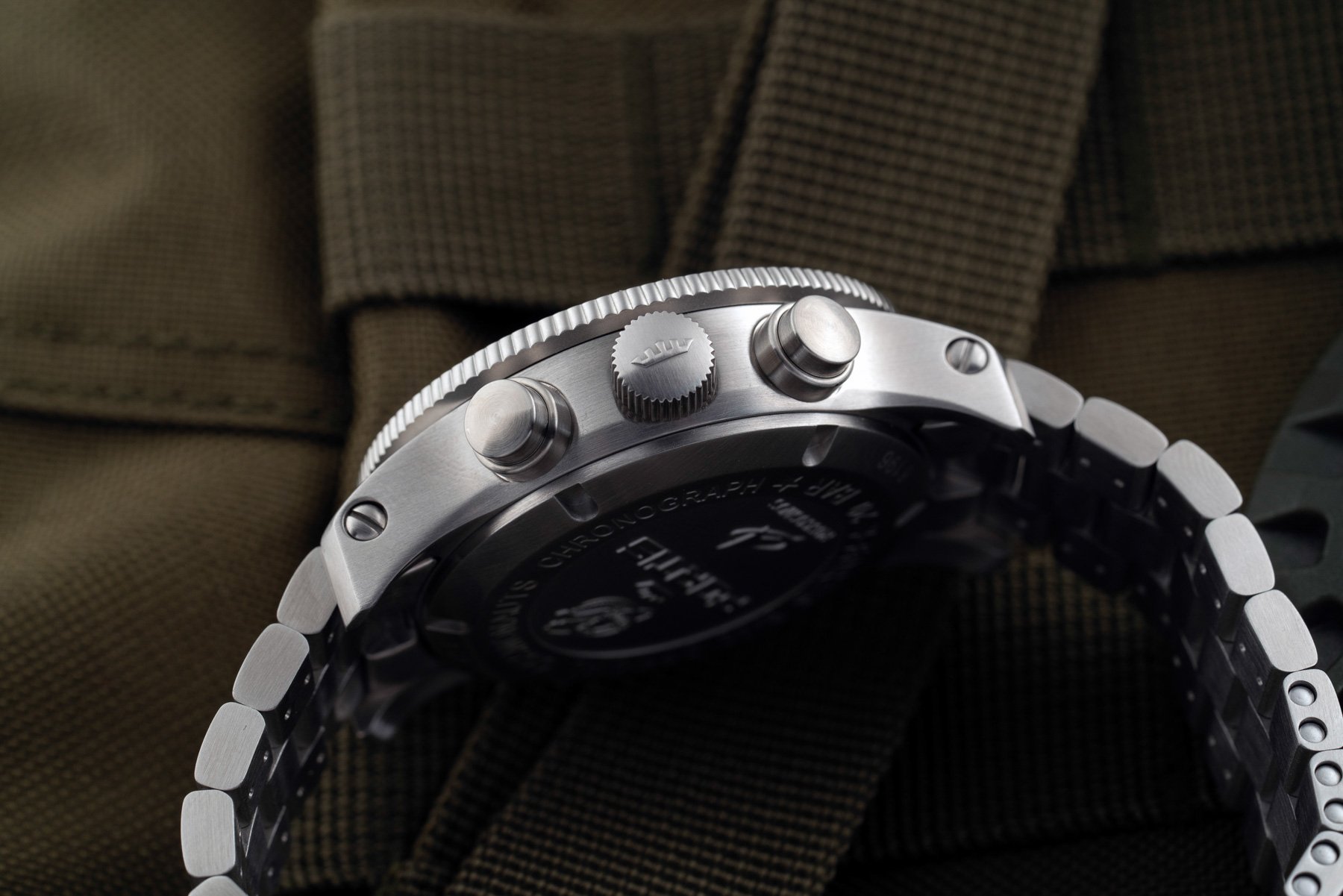 Large and in charge

OK, so there’s one area where the Seiko may have a slight advantage. That’s the size and, in turn, daily wearability. As the name suggests, the case diameter is 42mm, however, the bezel protrudes a little further to make the total diameter 44mm. Granted, 3mm is not a lot on paper, but on the wrist, 3mm counts for a lot. I have no issue with the overhanging bezel though, as it allows for easy grip and operation. It was a design choice in the name of function rather than style. The other common size complaint with Fortis watches is the thickness. At 15.24 it’s still no slim Jim, but it’s slimmer than the Seiko SRQ029, which measured a belt-busting 16mm thick.

The one measurement I can’t hide here is the 54mm lug-to-lug. If you’ve got particularly small wrists, then there’s not much you can do about that. Fortis does sell rather nice parachute-material straps from the US-based maker Nick Mankey. These would help the watch stay in place and sit a little better than it would on the bracelet. 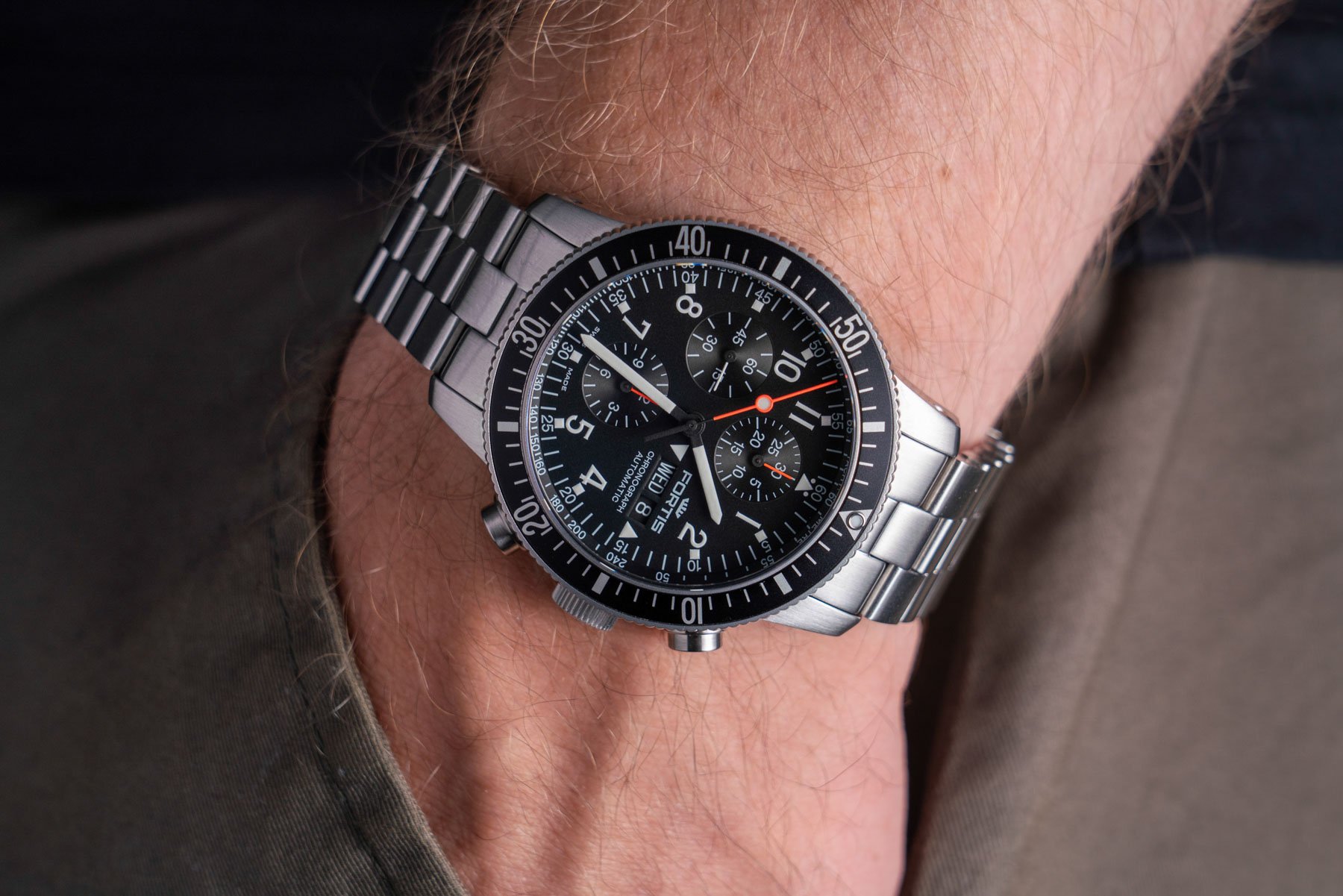 So there we have it. The logical choice for your vote. This is not just a chronograph watch meant for the racing drivers to time themselves on the track. No, this is a chronograph watch meant for the entire team. From the drivers to the engineers, mechanics, and analysts. Each one will find that the Fortis B-42 Cosmonauts Chronograph more than meets their needs. So, now it’s over to you, the readers, to cast your votes. Who goes through? Lex’s Seiko SRQ029 or my Fortis B-42 Cosmonauts Chronograph? Let the battle commence!

The Fast And The Fratelli — Seiko SRQ029 Vs. Fortis B-42 Cosmonaut's Chronograph

Hot Topics
Introducing: The New Seamaster Professional 300M 60 Years Of Bond — With A Special Animated Case Back
100 comments
It’s Time To Invest In A Dress Watch — Our Picks From Breguet, Omega, Grand Seiko, And More
67 comments
Are You Still After An Omega × Swatch MoonSwatch?
65 comments
Sunday Morning Showdown: The Tudor Pelagos Provocation — Pelagos Vs. Pelagos 39
55 comments
The Rolex Waitlist Conundrum — How Much Will The Price Of Your Watch Increase While You Wait?
48 comments
Popular
An Overview Of All Omega Speedmaster Apollo XI Models
Robert-Jan Broer
17
Speedy Tuesday – The Original Omega Speedmaster Ultraman
Robert-Jan Broer
5
You Asked Us: Nomos Orion as a dress watch?
Gerard Nijenbrinks
9