I actually don’t know what rooster foot tastes like. However, if it tastes half as good as it smells, it might well be my favorite food-in-waiting. And given that it smells half as good as it looks, the unusual material (that almost sounds kind of comical in a luxury context) is racking up the positive attributes. I bought this 20mm tapered leather strap from LIC in Belgium a few months ago and I fitted it to my original Nezumi Voiture “Quarts” model. It’s a handsome combo that I’m pleased to share with you today.

No, “Quarts” isn’t a spelling mistake on my part. It is the unavoidable nickname given to the first generation Nezumi Voiture Meca-quartz chronographs after a last-minute dial-supplier switch resulted in the mother of all misprints that gives me ten times more pleasure than the word spelled correctly. If I’d been overseeing that production run, my heart would surely have sunk at the time, but, in retrospect, this kind of story is priceless. From these amusing slip-ups, legends are born. It is impossible not to laugh at it now, and it even kicks off a discussion that should probably occupy another article itself, regarding the importance of accuracy and the joy of mistakes…

But back to the strap, which is, of course, the focus of this article. LIC has made no such mistake in the manufacture or presentation of this strap. Arriving in a handsome black cardboard box, decorated with gold foil print, the strap sets a high bar right off the bat. But how does it perform on the wrist? 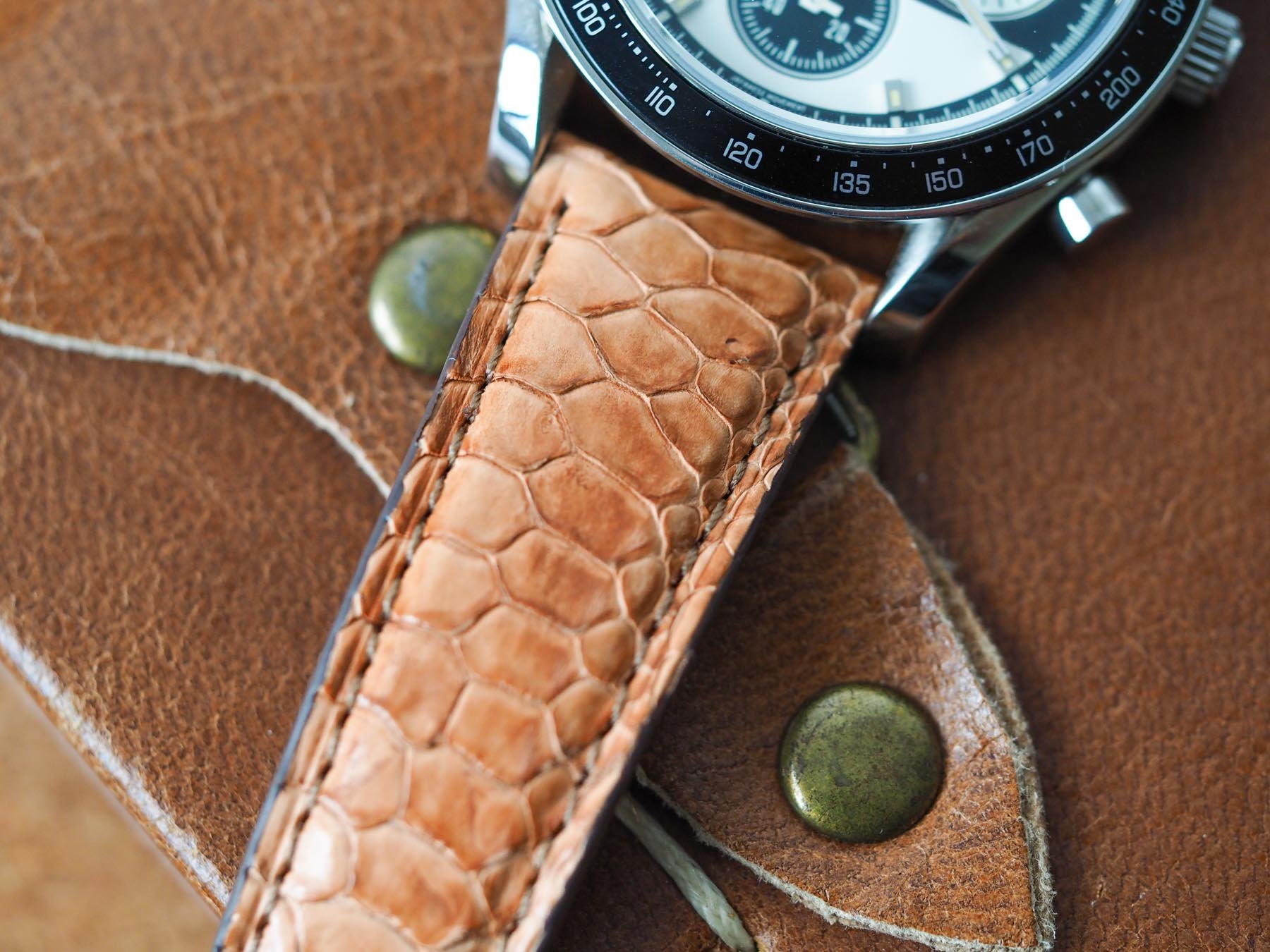 The LIC honey brown mat rooster foot strap is anything but stiff. While it doesn’t feel in any way insubstantial, it is a flexible and immediately comfortable strap out of the box. The rooster foot “scales” are considerately aligned to bend around the wrist and “flare out” away from the watch head as the strap flexes. This effect is not overwhelming or distracting, but it should be noted: this is not a smooth strap. It has an uneven, natural, textured surface. The material is expertly tanned, stitched, and finished, but this is still an honest material. In the mat format, it is particularly earthy; how it wears with a gloss finish, I don’t know, but I would think that combo (of such an”exotic” leather and “1990s hairdresser” finish) might be a bit much. 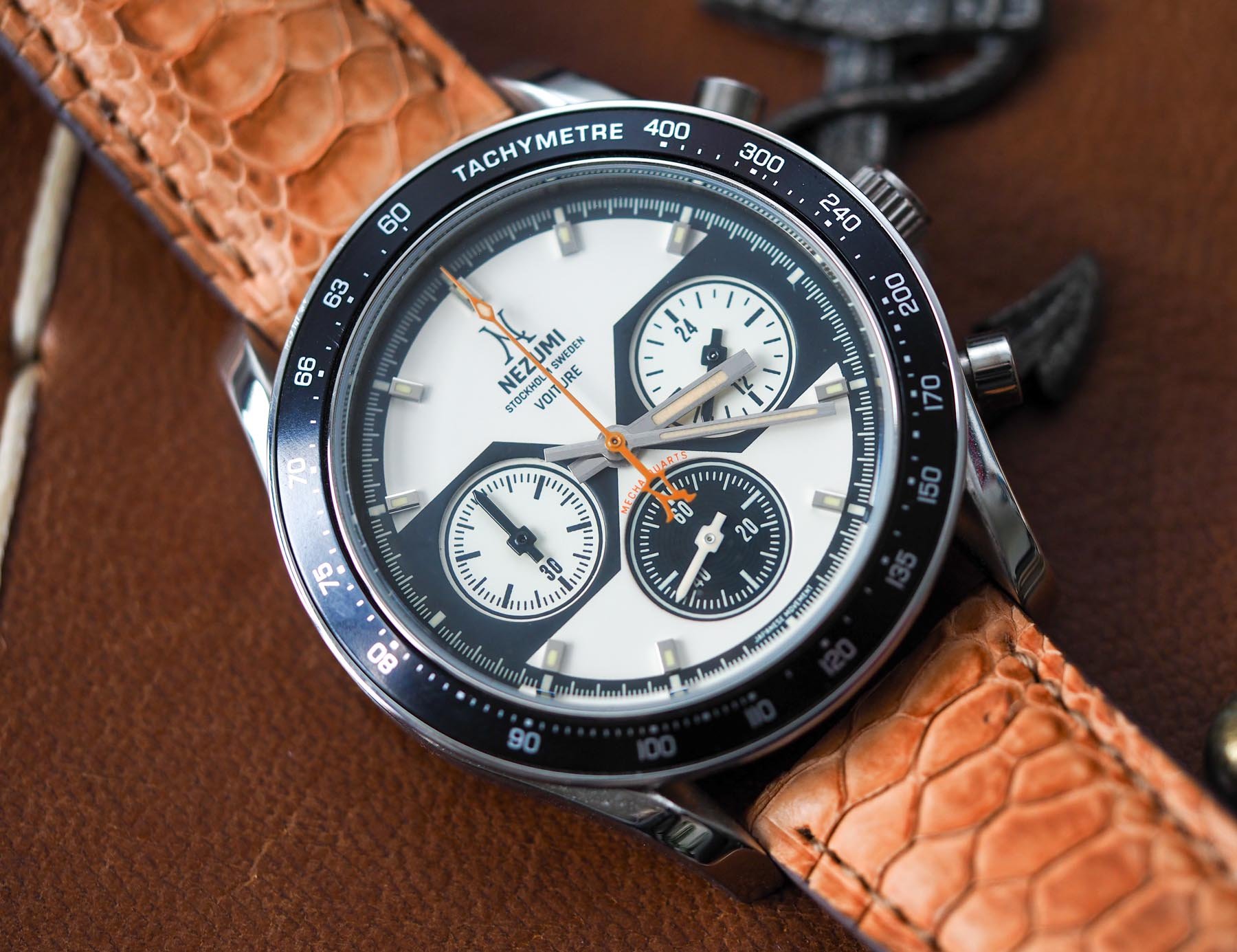 Better than it sounds

My girlfriend was really freaked out by the whole “rooster foot” thing. She thought it was seriously weird. I argued that a rooster’s foot is far more innocuous a thing from which to make a strap than a calf’s backside, but she remained unconvinced. I’ll admit, it sounds a bit odd, but if you remove yourself from that concern and actually give it a whirl, it will reward you. It is much better than it sounds, and, crucially, I am reliably informed that no roosters’ feet were taken while they still had use of them. 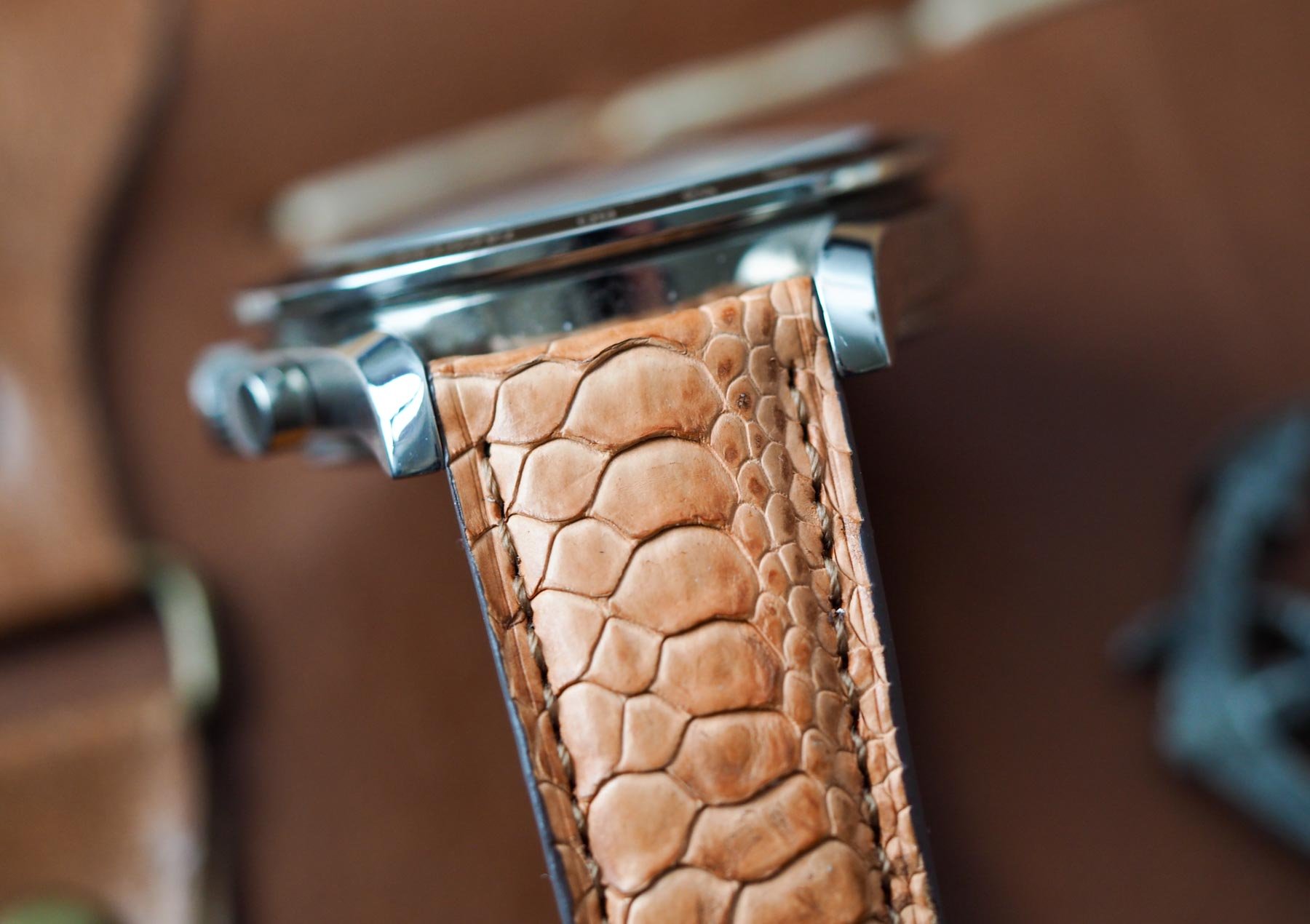 LIC straps come in lots of different sizes. This 20mm strap tapers to 16mm at the buckle. The strap’s size and shape suits this material. In fact, I would go as far as to say it is the perfect proportion for this strap. I think these kinds of materials can be a bit too shouty in wider lug widths and especially without a taper. 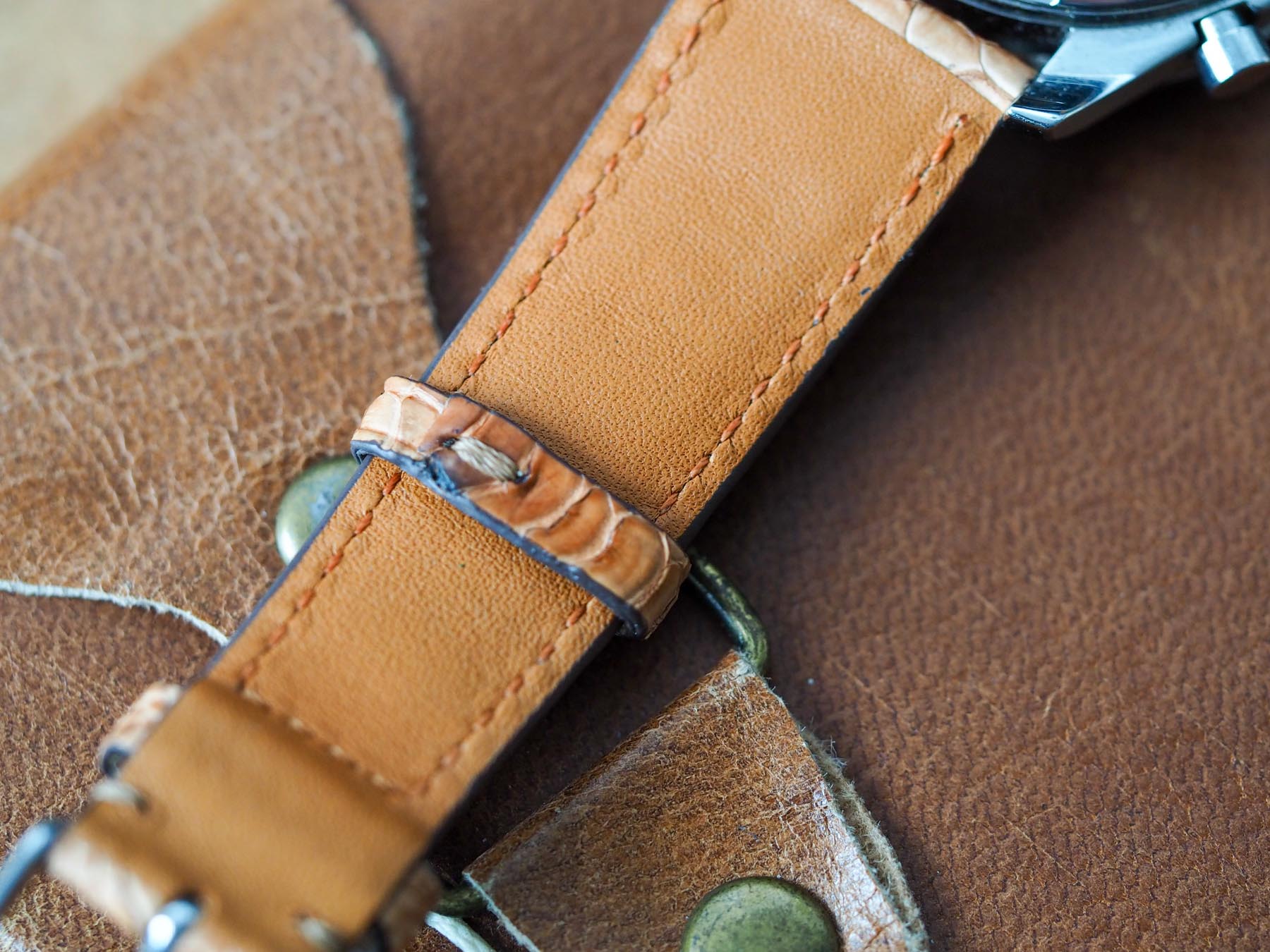 The color and the keeper

The color of the strap on the website is pretty accurate. If anything, mine is slightly more orange in real life but that is to its credit. I’ve heard a few concerns about the looseness of the floating keeper on LIC straps in the past, but I found mine to be ideal. In my opinion, it is very worthwhile ensuring your strap is the right length if you want your floating keeper to fit snuggly. 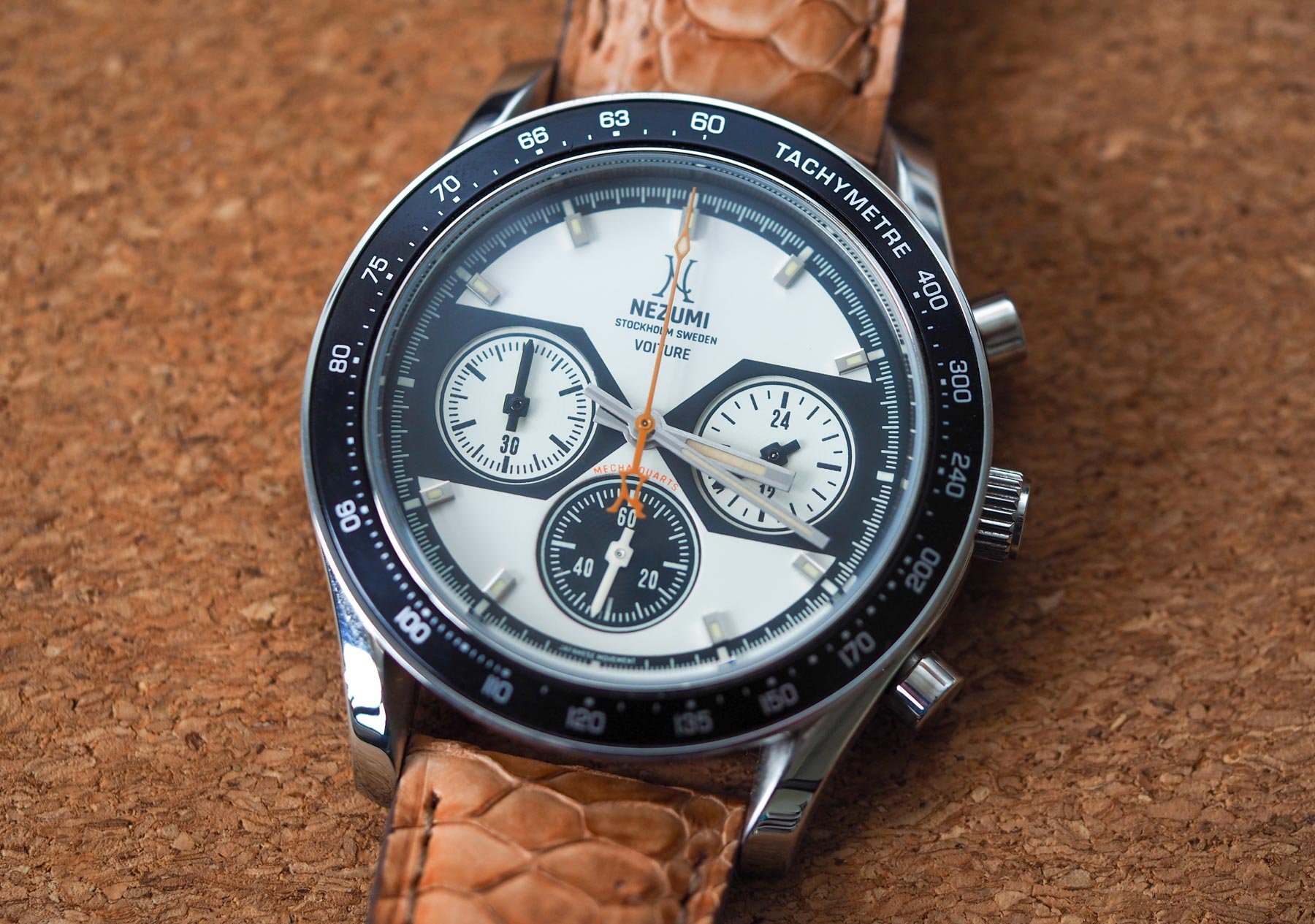 Obviously, when it comes to tapered straps, the keeper will be a bit baggy if you have the strap stretched out to its last or penultimate hole. With my small wrist, I tend to wear straps close to their smallest limit, which is good news for tight-fitting keepers. I would recommend getting a strap that fits on the second or third hole (from the 6 o’clock side) when your wrist is cold. This way, you get a nice, tuckable tail-end of the strap, the floating keeper resides on a thicker part of the strap, and you have plenty of room to loosen the strap in warmer weather or after a hard day hammering the keys without losing your keeper stability. 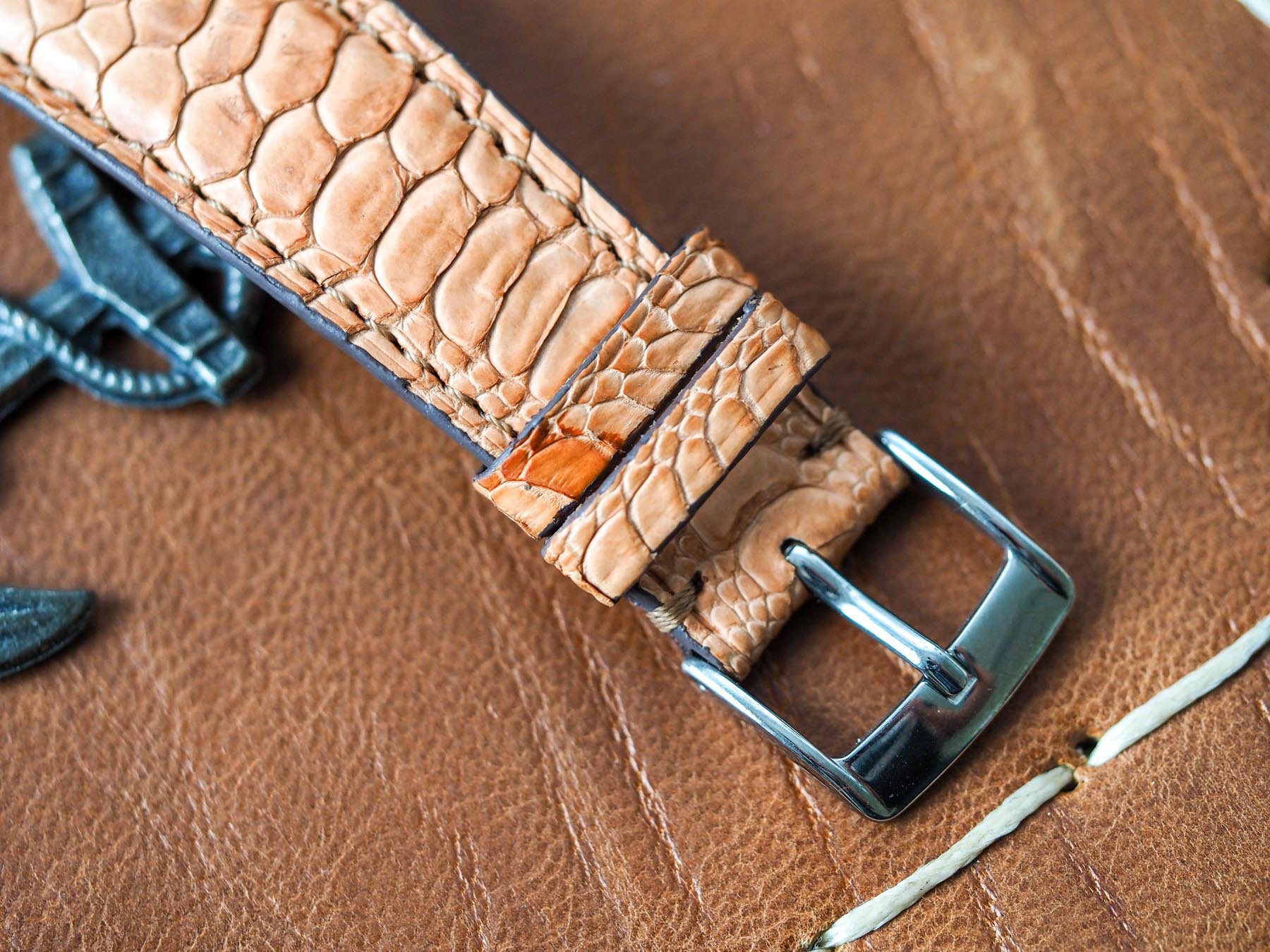 While adding quick-release spring bars ups the price by €10 to €145, choosing between a steel, gold, or absent buckle doesn’t change the price at all. While I have gone on record multiple times stating my disdain for cheapo stock buckles, I suppose it doesn’t really make much sense to select a strap without a buckle if there is literally no movement in the price. Even a saving of €2 would compel me to ditch the buckle, but I can’t shake the miserly Northerner in me to look a freebie in the face. 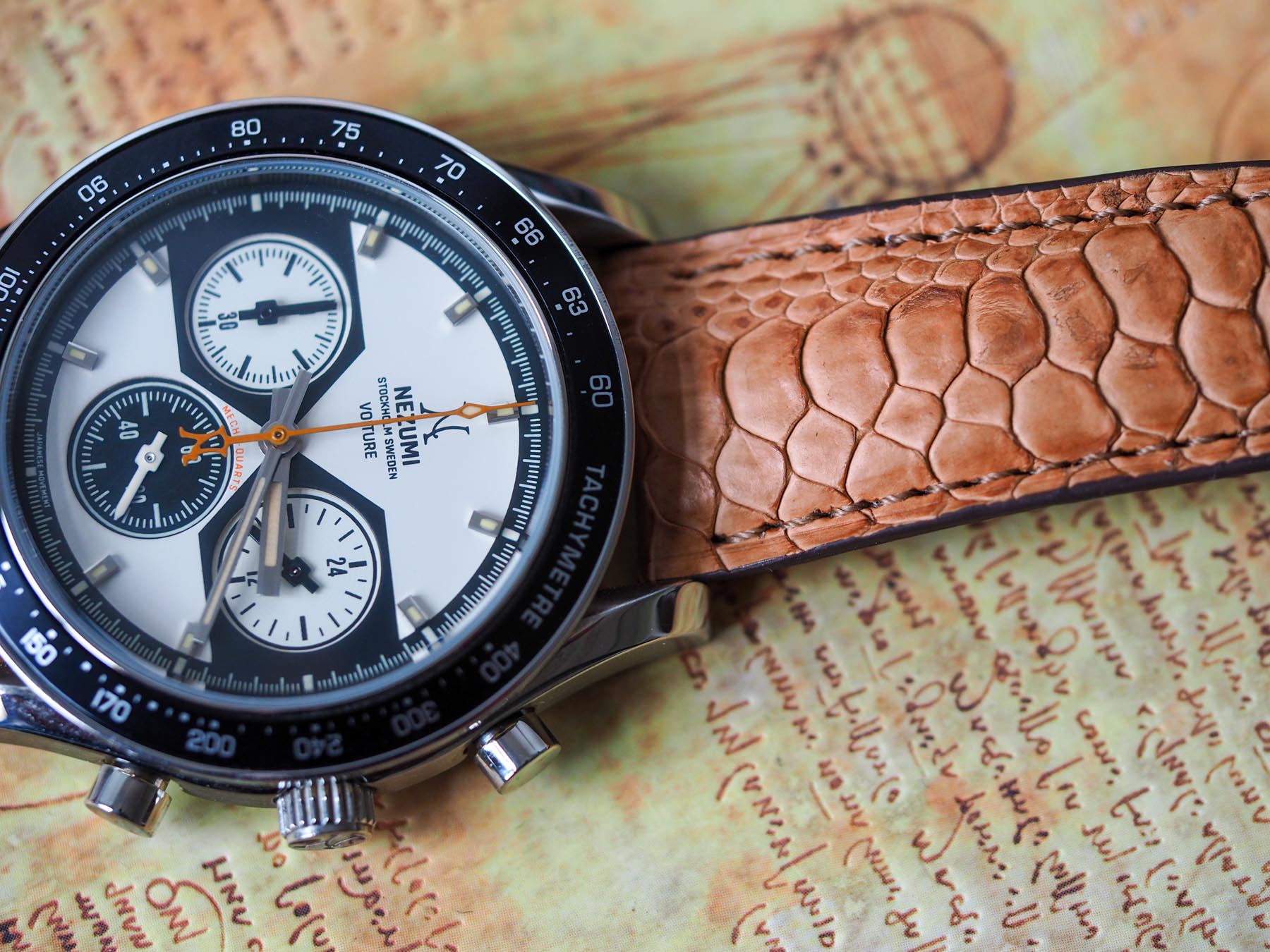 A few of us at Fratello order LIC straps to test them out. I’m not sure whether a couple of us just drew the short straw and received an older buckle style or whether the style depends on the taper, but mine and Dave’s were significantly poorer than the others. It bothered us not, and I was happy enough to use the pressed/over polished stand-in for a while, but I really would advocate flipping the stock buckles for a brand-appropriate alternative if it is at all possible. Bear that in mind before ordering and, if you do have a suitably sized alternative of decent quality, perhaps it is wise to do the planet a favor and leave the LIC buckle on the shelf. 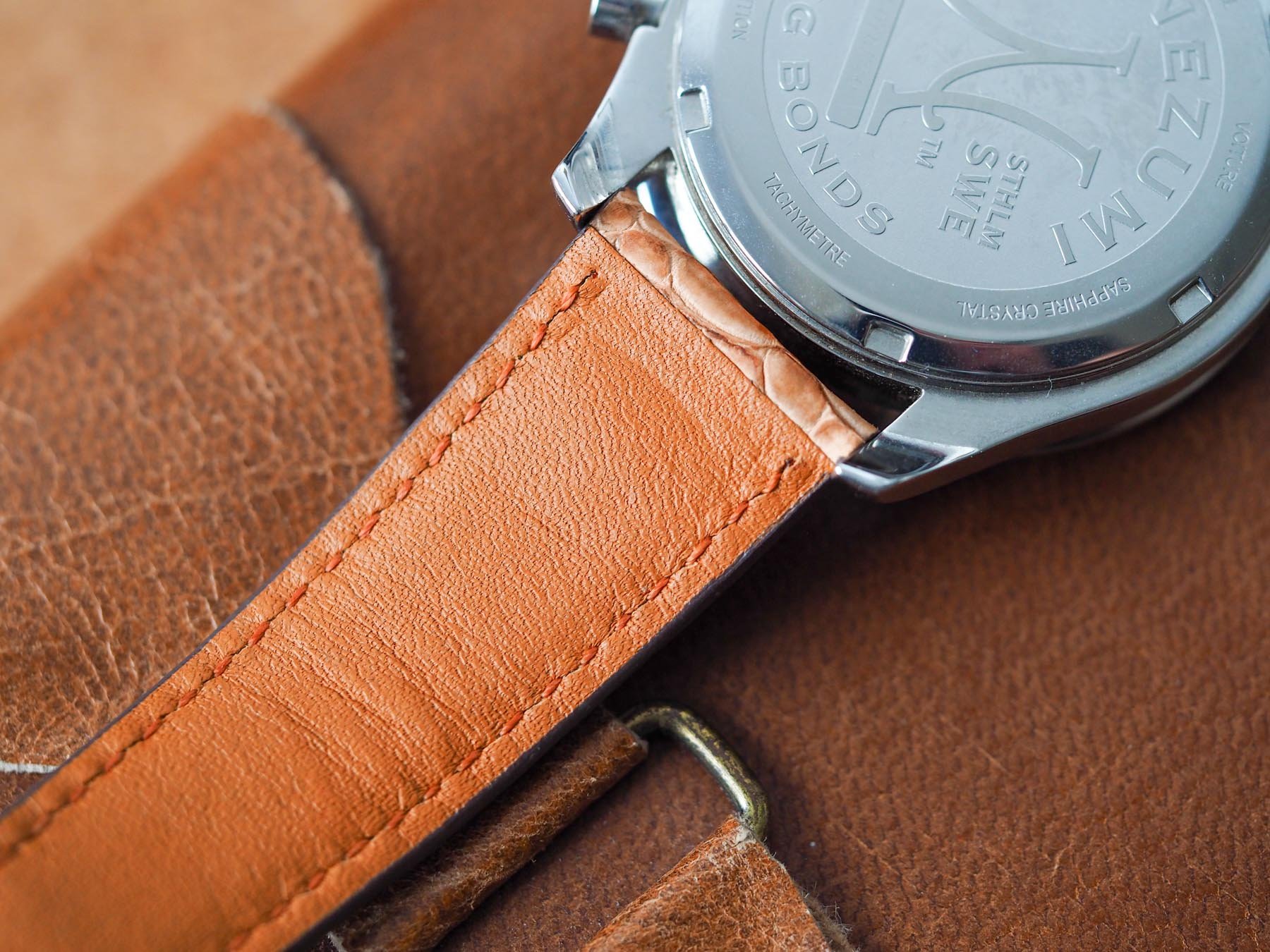 I made the mistake of not getting the quick-release spring bars I’m now advocating. Don’t be a silly Bobby like me.

I was always a bit skeptical of quick-release spring bars, to be frank. The cut-out window on the back made me nervous that the strap was more likely to rip at that obvious weak point. I guess technically it is more likely to rip at that point, but since I have literally never seen it happen, I’m convinced I need to get over my almost certainly irrational fear. I am now converted to quick-release spring bars. My recent strap odyssey with the echo/neutra Cortina Chronograph convinced me. Thanks to these easy-to-switch straps, I wore it on five different straps over my first week of ownership and I had a blast. Conclusion: pay the ten bucks and get the QR spring bars. It is totally worth it. 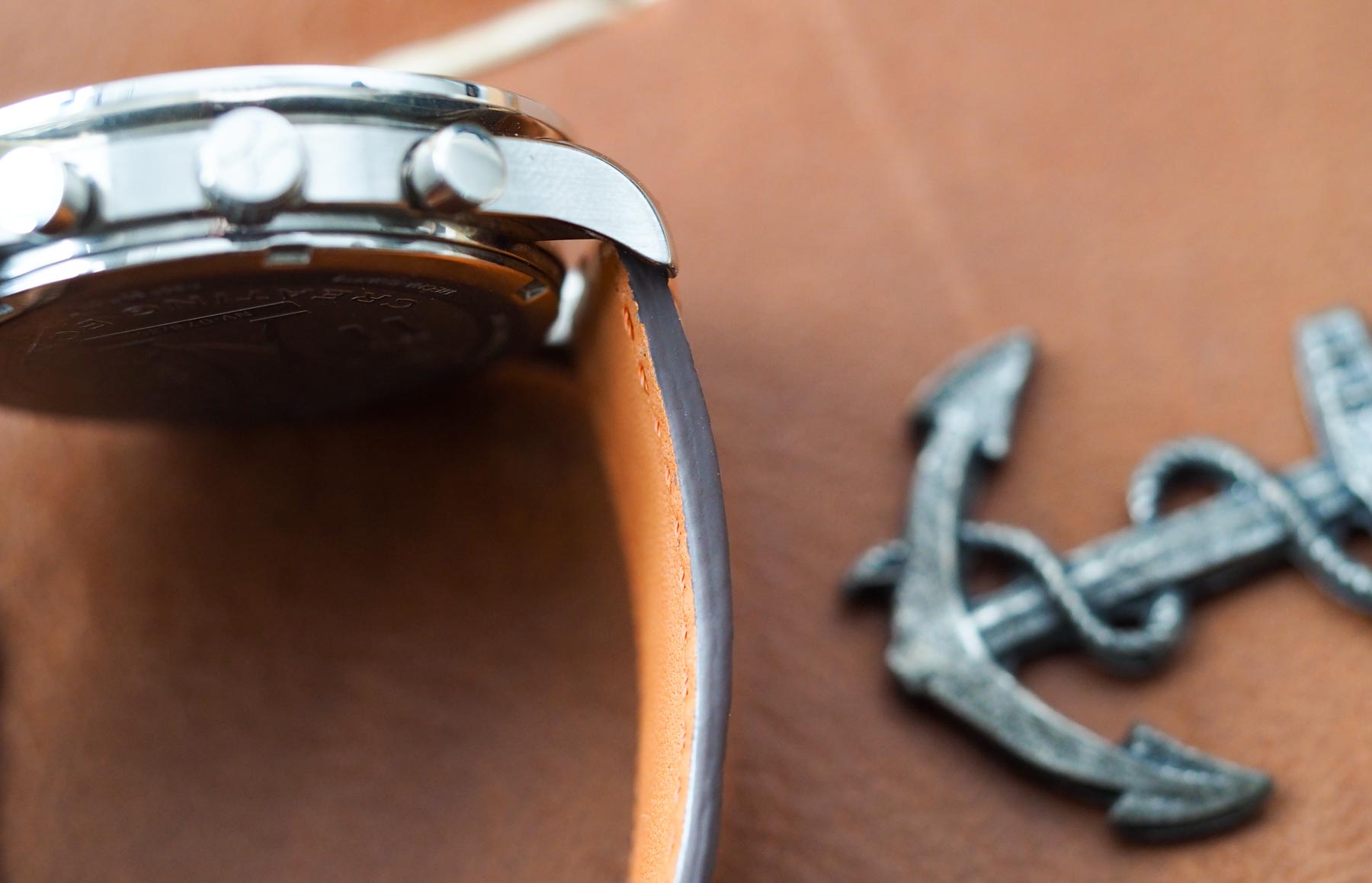 The stitching is good quality. The sealing on the back and sides is very neatly done. There is no glue leakage and no rogue flaps threatening to catch on your clothing. Pairing this kind of strap with the right watch is essential. I can barely imagine a better fit for this particular model. The Nezumi’s retro styling and burnt orange seconds hand make for a pleasing match. 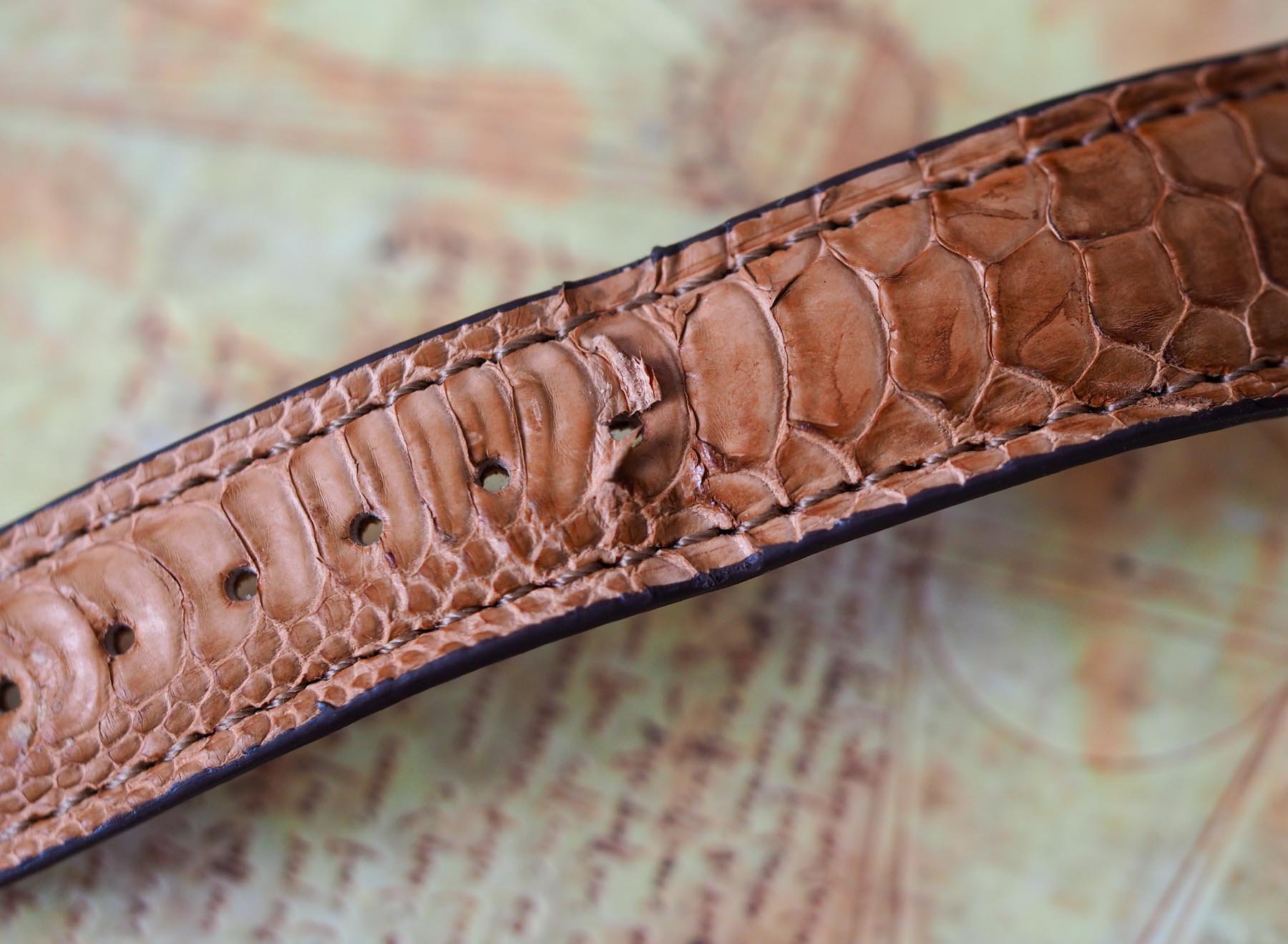 You must be aware, however, that a rooster foot strap is not the most durable on the market. This is a luxury leather and a luxury surface finish that doesn’t stand up to the same kind of battery LICs other straps can. You will notice on mine that the leather is very stressed around the hole I prefer. This is caused by a confluence of factors. Firstly, the leather is generally susceptible to this kind of damage given its textured surface. Secondly, the hole has, by chance, been punched right through the edge of a “scale”. Finally, the fact I wear my straps so tight has put added strain on the area. The frequent flexing of the leather has exacerbated the wear. 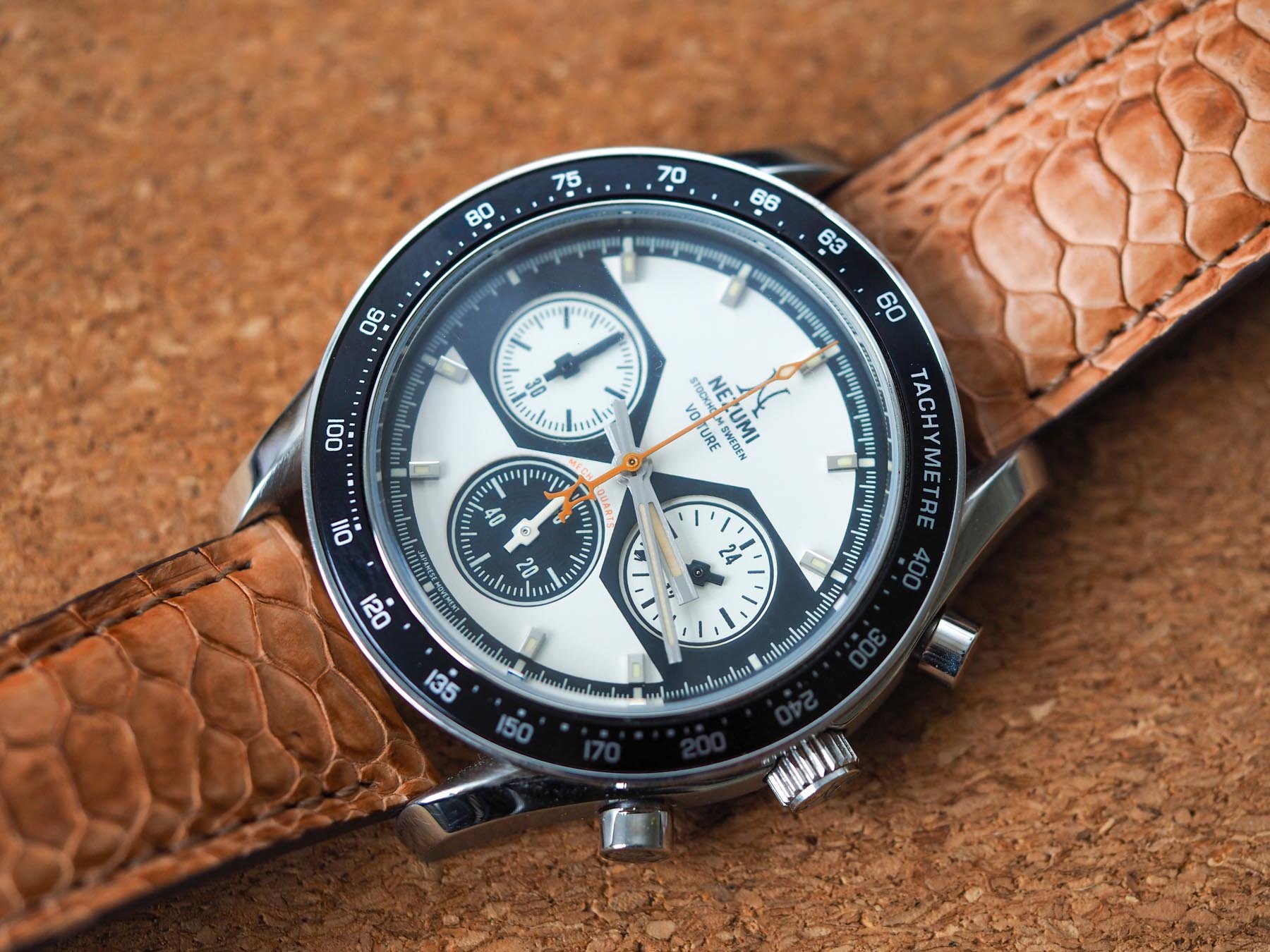 While the early damage is not visible when the strap is fastened, it is there. I’m quite comfortable with it because it makes perfect sense. If this kind of thing annoys you, however, I would steer clear of the rooster foot and select something with a more homogenous surface. Dave bought the wolffish version and hasn’t shut up about it since. I have to admit, though, it is an interesting leather. While not the cheapest after-market strap supplier, I do find these LIC straps to be pretty well priced given the exceptional aesthetics. They surely have the ability to freshen up a tired old watch (of a dressier style) and give it an entirely new character. Learn more about LIC here.