Two hundred years ago, Nicolas Rieussec invented the world’s first chronograph. It was a clever device that did not only measure time but could also record it with an ink drop on a rotating disc. Rieussec named the device chronograph, a combination of two words taken from the Greek. “Chronos” stands for time, while “graphien” meaning writing. The world’s first “time writer” was born.

Montblanc pays tribute to this tremendous horological achievement by releasing the Montblanc Star Legacy Nicolas Rieussec Limited Edition 200. The watch is a new iteration of the brand’s already existing model with a new look.

For a long time, the watch world considered Nicolas Rieussec’s creation the first chronograph. However, it turned out that this 1821 invention is indeed an early one but not the earliest. That title belongs to the French Louis Monet, who beat Rieussec by five years. Monet created his device, which was to be used with astrological equipment in 1816.

The special feature of Rieussec’s chronograph, however, was the time recording function.

On September 1st, 1821, he tested it at the Champ-de-Mars Arrondissement de la Seine race in Paris. His chronograph was able to measure the distance of each horse competing in the race. 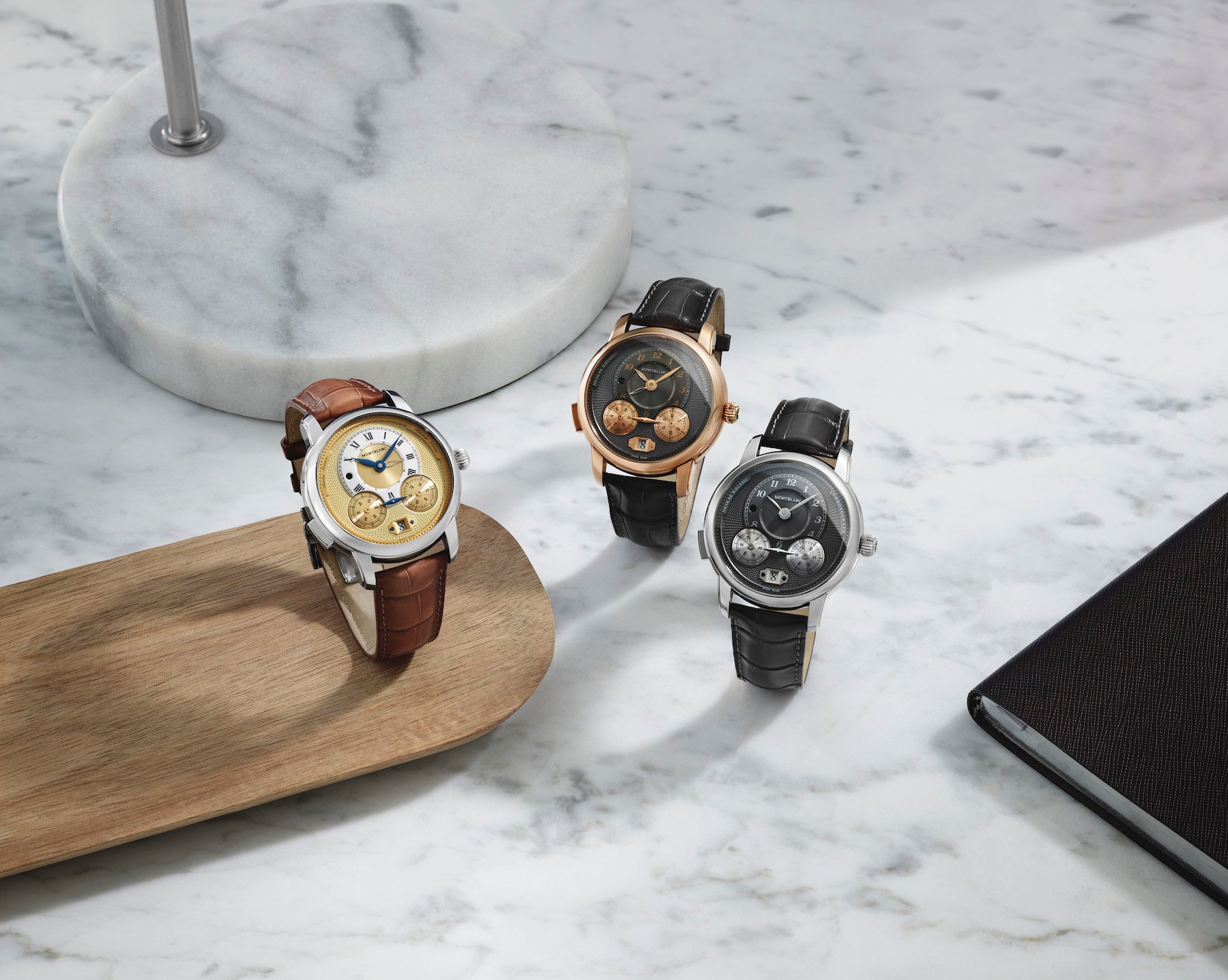 Furthermore, the timepiece had a fixed nib that would draw a small black ink dot on two rotating discs every time a horse would cross the finish line. After a few weeks, Rieussec presented his invention to France’s Academy of Sciences in Paris. Technically it is a mistake that we call every other watch with such a feature today a chronograph, as they do not write the time, only show or record it, just like how Monet’s device did back in 1816.

September 1st, 2021, marks the 200th anniversary of this outstanding achievement. Montblanc wishes to commemorate this date by releasing their Montblanc Star Legacy Nicolas Rieussec Chronograph LE 200, a watch of only 200 pieces. The timepiece takes inspiration from the original device’s golden color tone. The dial, composed of six different parts providing a 3D effect, comes on gold-color with a traditional guilloché grain d’orge decoration. 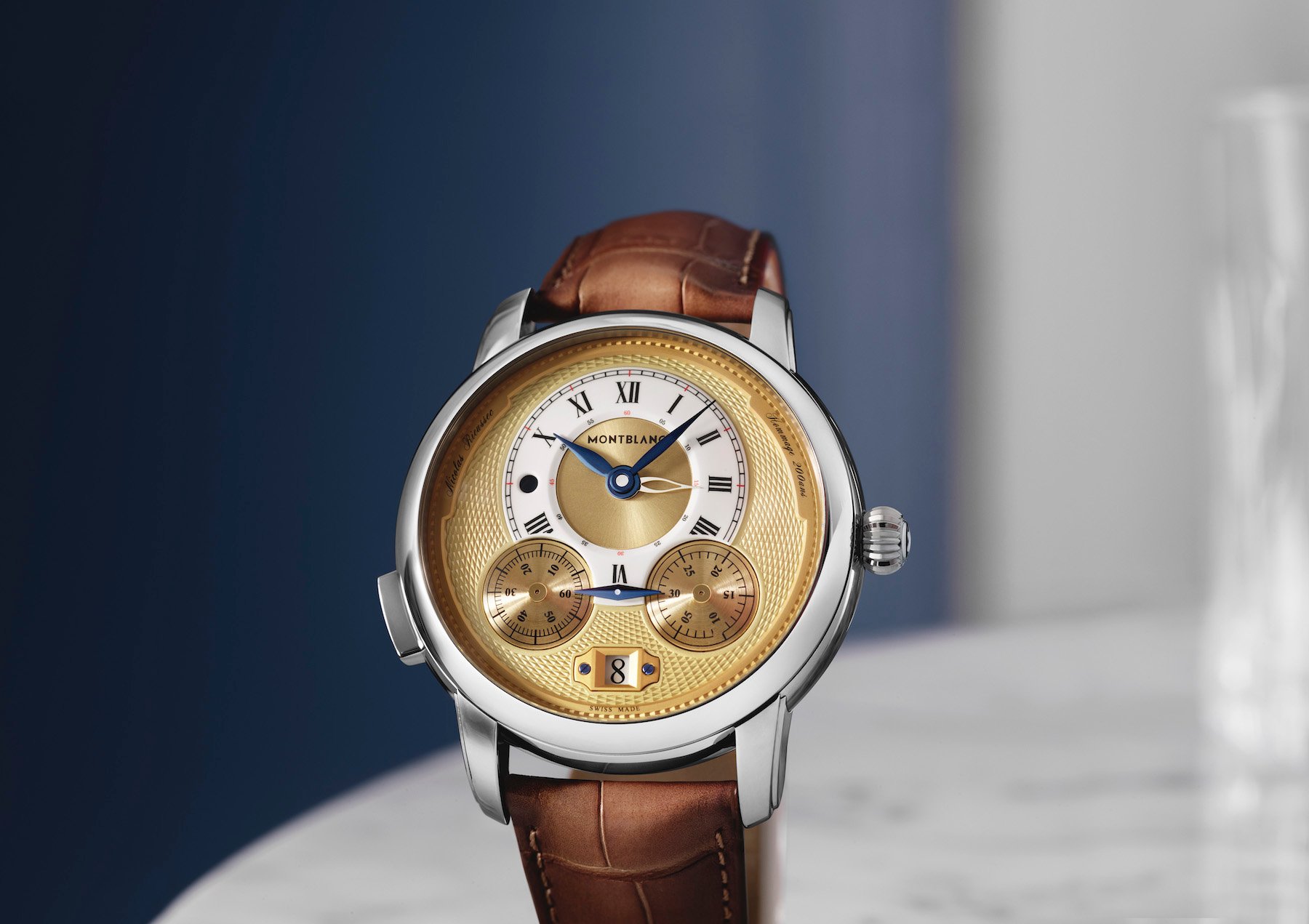 Following the design of the first chronograph, the Montblanc Star Legacy has two gold-colored rotating chronograph discs at the lower part of the dial. The one on the left side is the 60-seconds counter. The other is to measure 30 minutes. A blued applied double hand can be found between these dials, reminiscent of the ink nib from the original device. Below the discs at the 6 o’clock position is the beautifully executed date aperture, its frame fixed in place with blued screws. 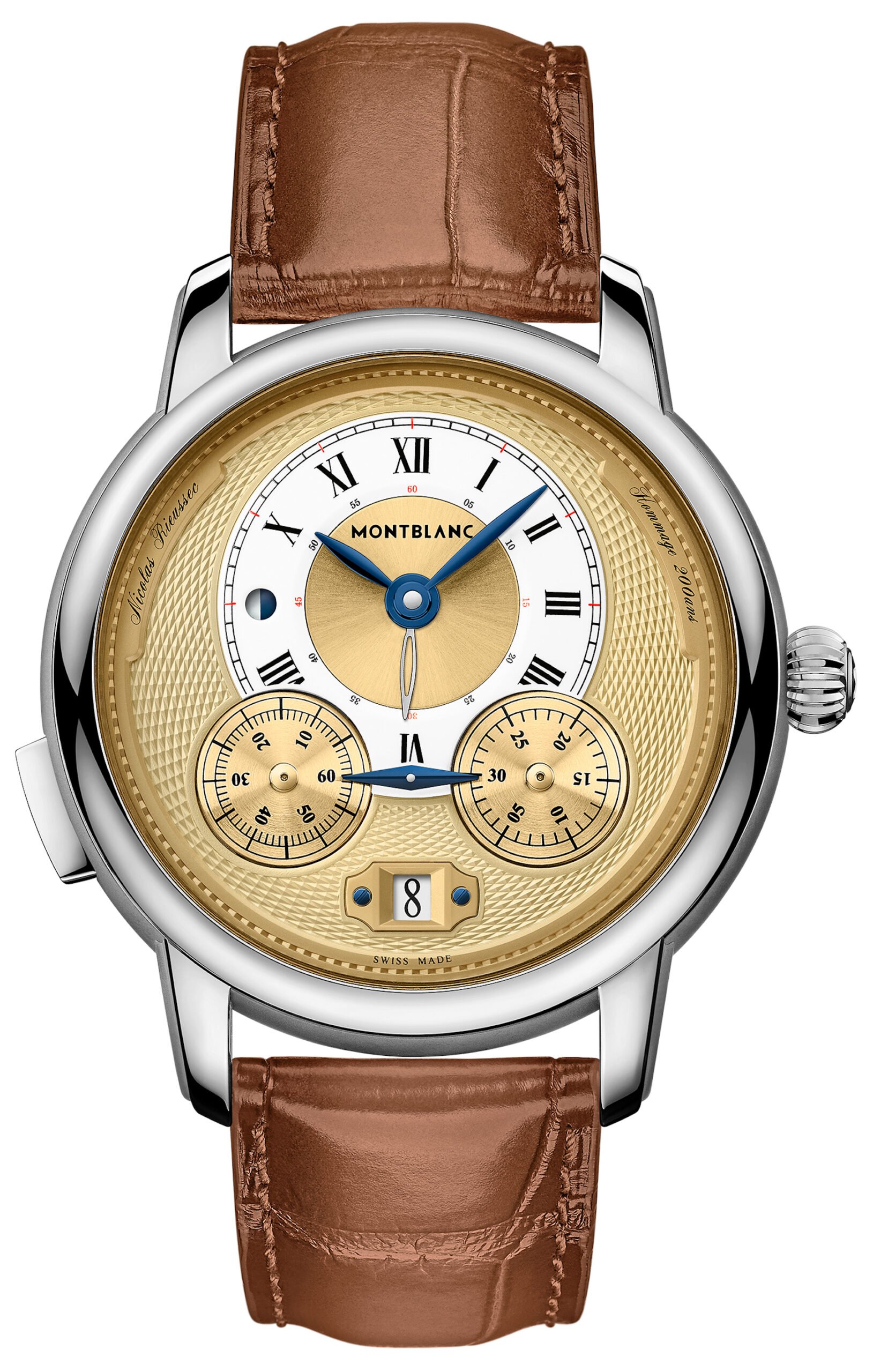 At 12 o’clock is the watch’s off-center, domed, white lacquered dial with roman numerals. The hour and minute hands are blued steel, while a rhodium-colored open-work hand is used to measure a second timezone. Furthermore, at 9 o’clock of the dial, there is a small aperture indicating AM/PM. Montblanc pays tribute to the inventor of the first chronograph by placing “Nicolas Rieussec” and “Homage 200 ans” on the rim of the golden dial of the timepiece. 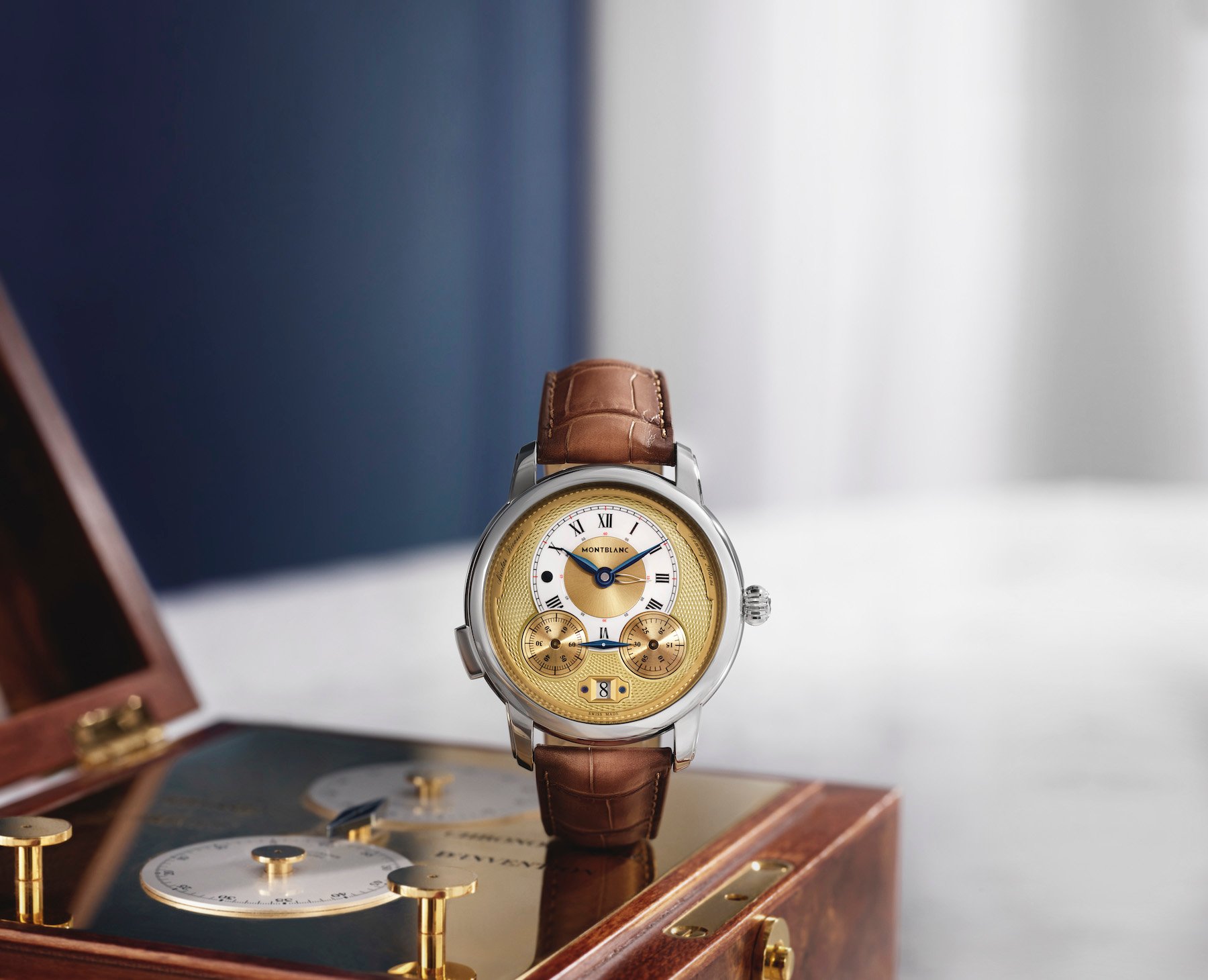 Inside the Montblanc Star Legacy Nicolas Rieussec Chronograph LE 200 beats the brand’s MB R200 caliber. We are talking about an automatic mono-pusher chronograph caliber with a column wheel and vertical clutch. The MB R200 offers 72 hours of power reserve. Double barrels inside the caliber help achieve this. Nonetheless, the movement is not only technically sophisticated but also beautifully decorated. While the oscillating weight has a golden color, it has the same guilloché grain d’orge decoration as the dial with a unique engraving of the Champ-de-Mars Arrondissement de la Seine race, where Rieussec first tested his device. 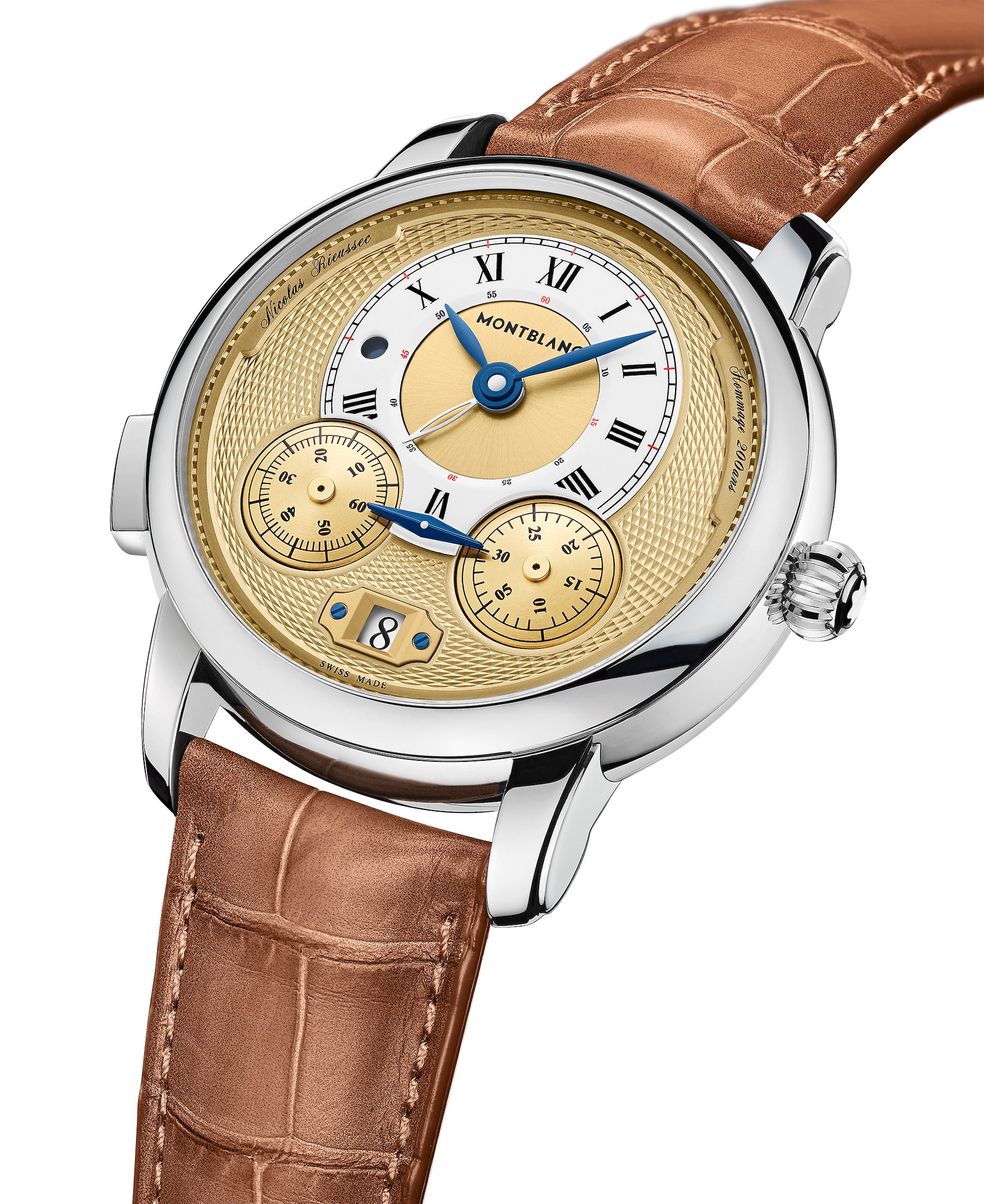 The Montblanc Star Legacy Nicolas Rieussec Chronograph LE 200 comes in a pebble-shaped, polished, stainless steel case. Its diameter is 44.8mm, with a height of 15.1mm — scratch-resistant sapphire crystal domes over the dial with antireflective coating. The watch is water-resistant to 50m and comes on a brown alligator leather strap with a steel triple folding clasp. Montblanc is offering this new timepiece for €8,000. Keep in mind we are talking about a limited edition of only 200 pieces. If you’d like to know more about the new Montblanc Star Legacy Nicolas Rieussec Chronograph LE 200 make sure you visit the brand’s website.