Today, we examine a rare vintage Citizen Auto Dater 40M Diver. We’ll talk about why this watch also happens to be a bit of an enigma. Its good looks, however, require no sleuthing.

One could say that we have our “boat on plane” here on Fratello when it comes to looking at vintage Japanese watches (i.e., we’re cruising). You folks seem to like seeing these unique pieces from yesteryear, so we’ll keep the throttle down for the foreseeable. The Citizen Auto Dater 40M Diver we’re discussing today just so happens to rank as one of the most beloved pieces in my vintage Japanese watch collection. It’s a diver and I fall for those easily, but it’s one of those watches that I bought without really knowing its history. As you’ll see, it turns out that I still don’t know much about its beginnings at all… 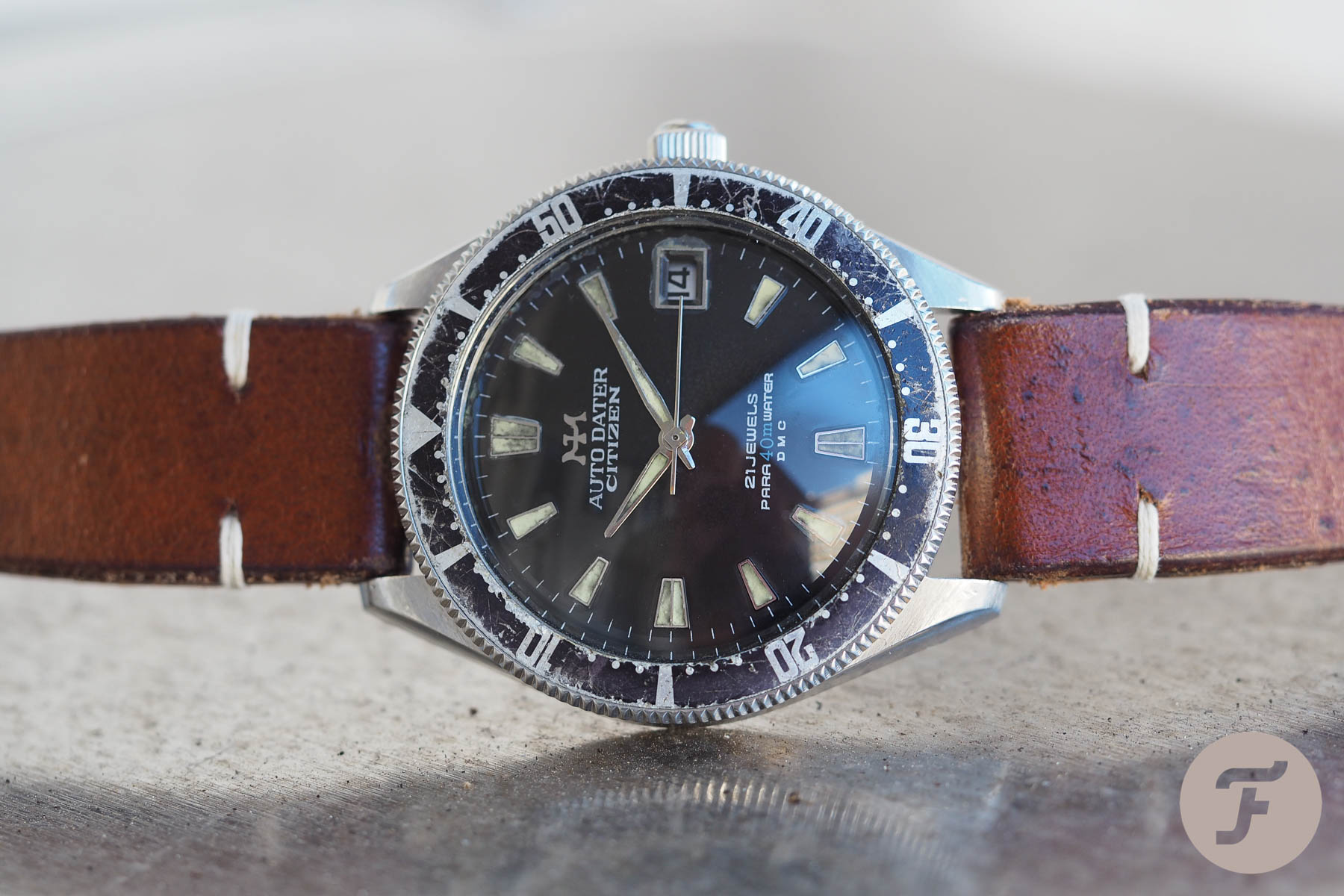 The Citizen Auto Dater 40M diver carries the reference ADOS 3001-D. It’s a 40mm steel diver with a bi-directional dive bezel. To help sell its diving looks, it has a screw-down case back. It comes with a mineral crystal that barely rises above the bezel and a push-in crown. Based on its styling, it seems to date from the mid-’60s, but no one truly knows. The age is the first mystery because the watch lacks a serial number on its outside case back. That’s an oddity because Citizen added this information to most of its watches both prior to and after this piece.

Today’s Citizen truly looks the part of a real diver…

Despite the features I mentioned above, the Citizen Auto Dater 40M diver, as its name suggests, is only useful down to 40 meters. We’ve spent time with plenty of pieces from Orient, Seiko, and even Citizen in prior articles that also masqueraded as dive watches. Just think about the Uni, the Silver Waves, and the King Divers. None of these pieces were good for more than 50 meters, but they all had one thing in common: internal dive bezels. Today’s Citizen truly looks the part of a real diver and it even feels quite substantial owing to its weight and that crystal. 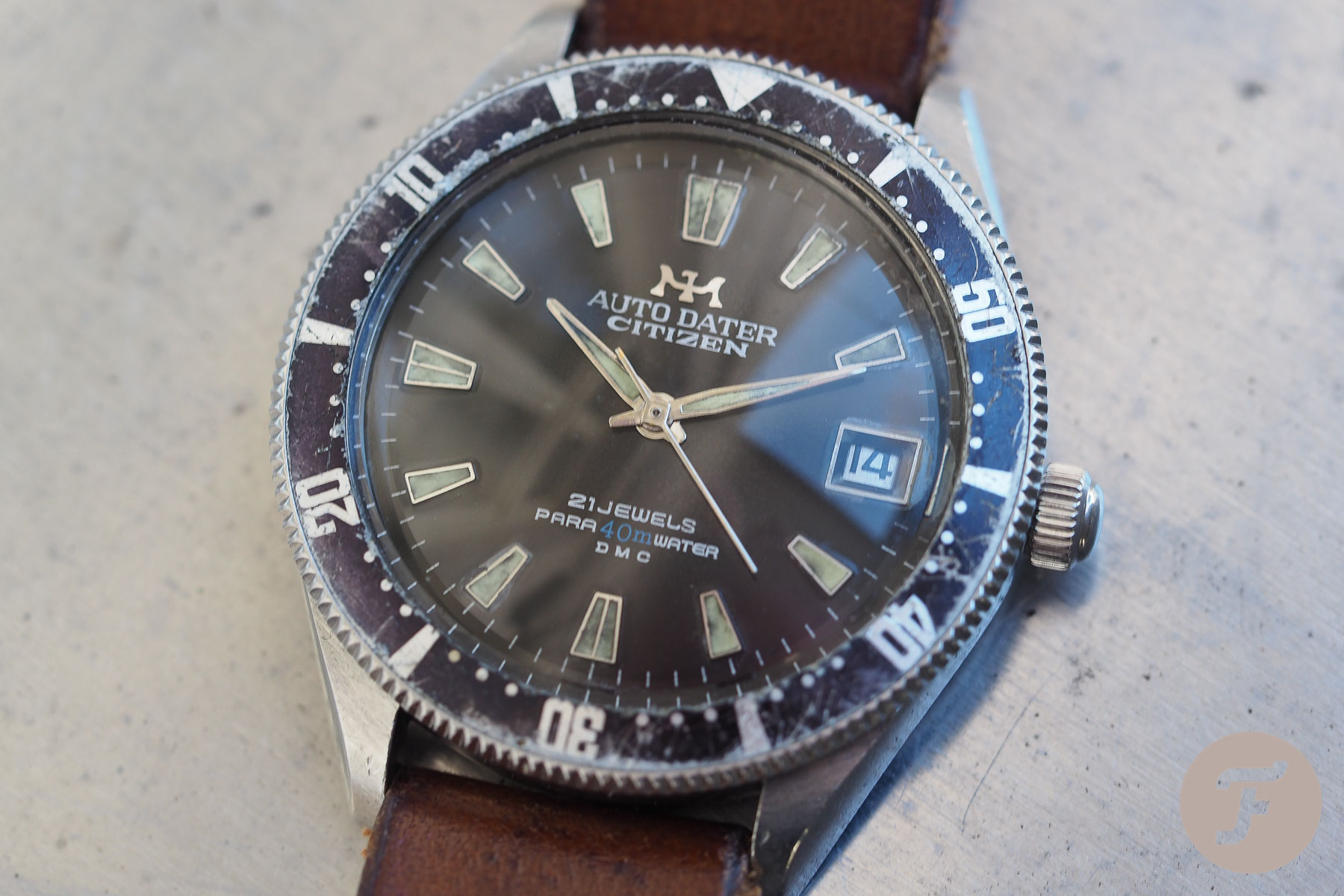 The dial on this Citizen Auto Dater 40M diver is what most certainly drove the acquisition. It’s incredibly hard to photograph, but the dial is actually a very dark grey sunburst. That’s pretty hot in itself, but what I really enjoy is the balance achieved with all those lume plots. Ditto with those delicate lumed hands. I’d say that their thinness supports the more recreational nature of the watch. Still, just look at them. This was a time when the Japanese watch brands were figuring out their identities. Both Citizen and Seiko had used generic skin diver cases for their first divers. This piece, however, uses bespoke hands and the whole design feels relatively unique. 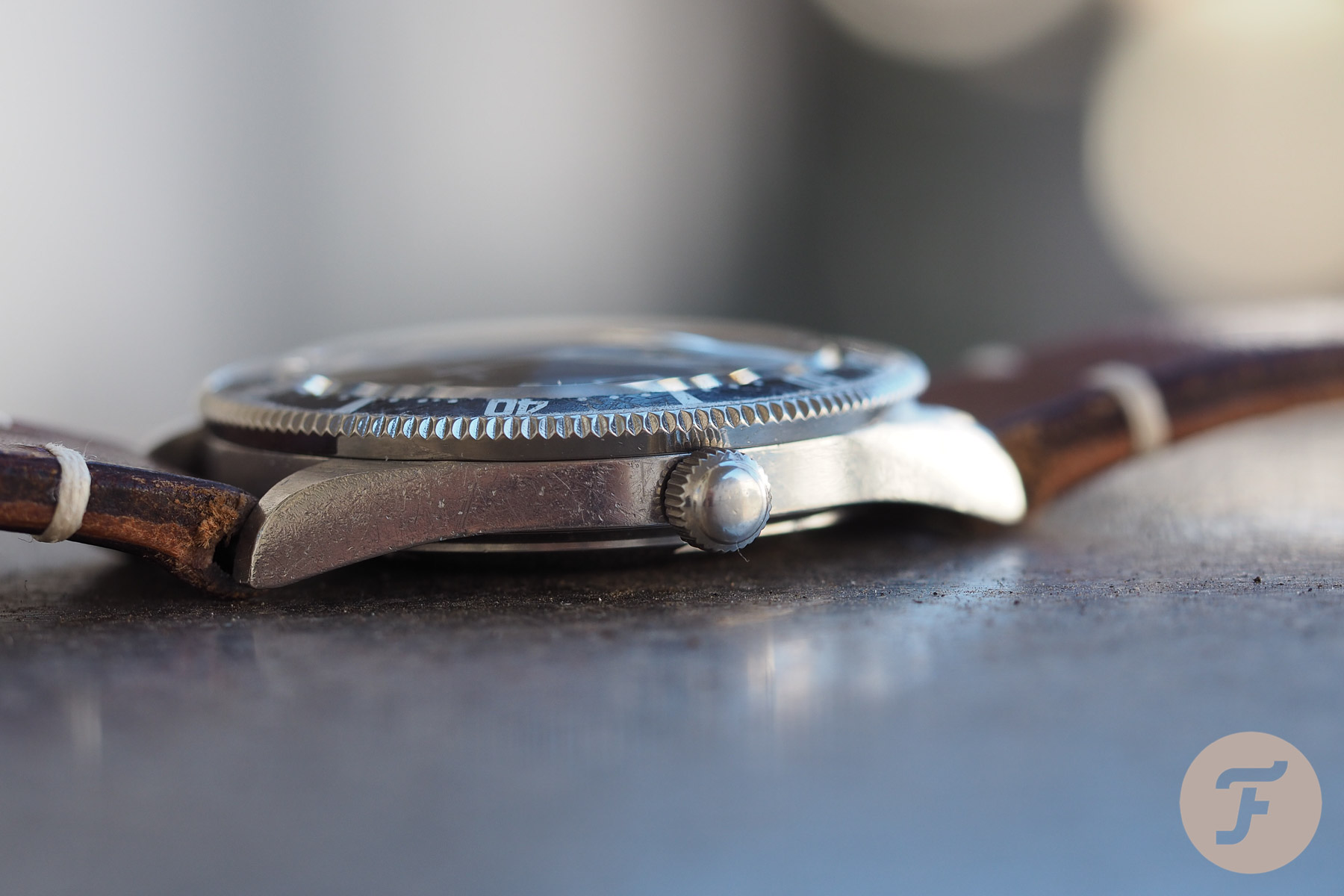 There are other visual niceties on this Citizen Auto Dater 40M diver such as the applied eagle motif just below 12 o’clock. It repeats itself on the case back along with some rather proud wording such as “waterproof” and “diver”. Like a lot of pieces during this period, this case back is another artistic gem with its engravings, relief shapes, and mixed fonts. If we turn back to the dial, I’d be remiss to omit a nice touch with the “40M” in blue. 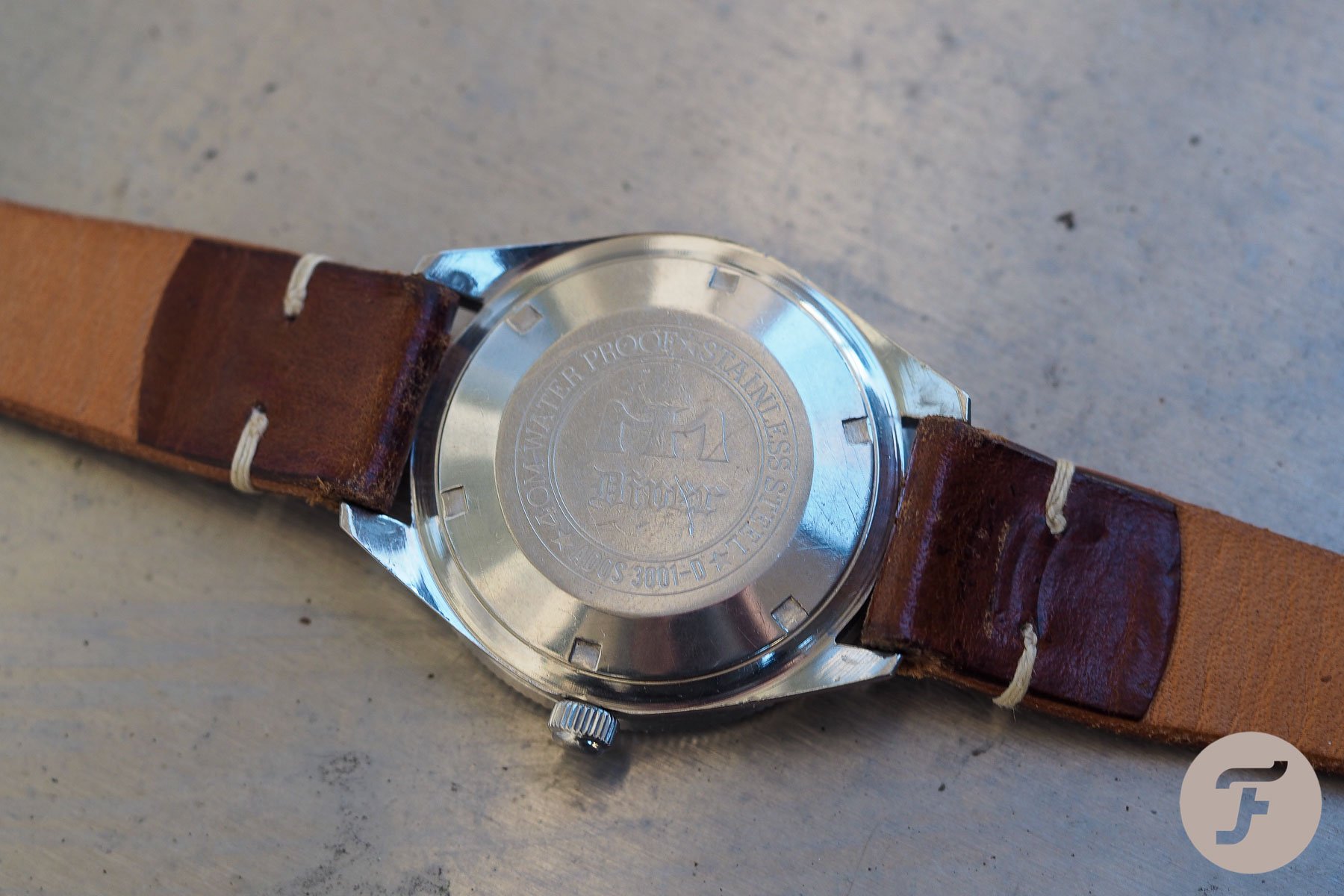 If you’re considering a vintage Citizen, do yourself a favor and pick up a piece with a Jet movement. I reviewed a dress piece with one of these gems a couple of years back and the movement photo was a real crowd pleaser due to its turbine-shaped rotor. Happily, this Citizen Auto Dater 40M also contains a Jet movement and I think that adds some real credibility. With the Jet, there’s hand winding, but the date function is unfortunately not a quick set. 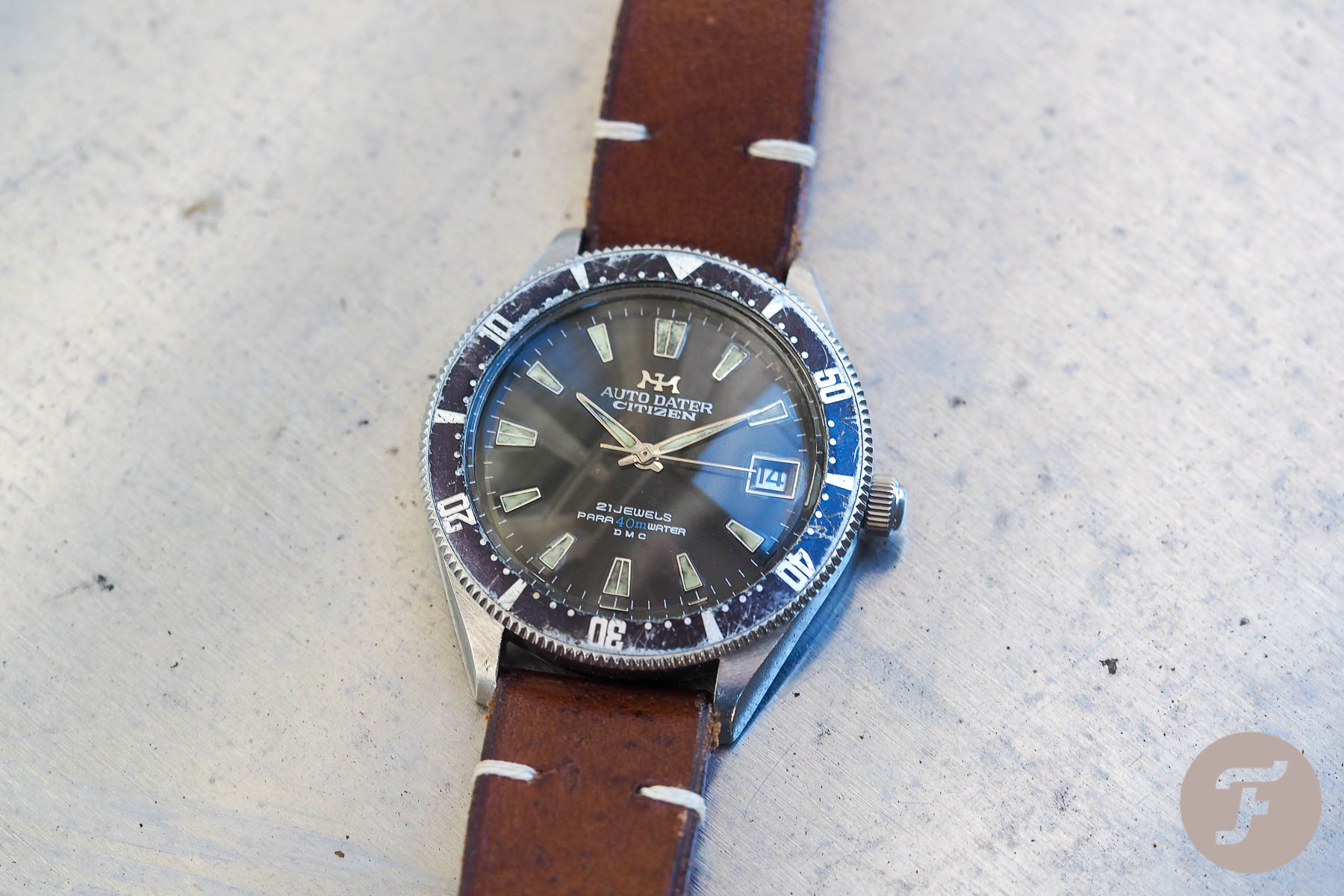 One thing I’ve failed to mention about the Citizen Auto Dater 40M is a little detail on the dial. If you look just above 6 o’clock, you’ll notice the letters, “DMC”. Since owning this piece, I’ve routinely gone out to the internet and Instagram just hoping that someone will be able to explain what this means. The issue is that these watches are incredibly rare (or my lack of Japanese language skills has kept me from finding a dedicated “DMC” Citizen page) seemingly without explanation. A trip over to one of my favorite sites, Sweephand, reveals another model with the DMC name, but every other owner I’ve encountered is also searching for answers. Regarding Instagram, my cry for help led to one other friendly Japanese collector posting an identical example to mine in lovely condition. In our chats, he had come across exactly one other example. The mystery continues… 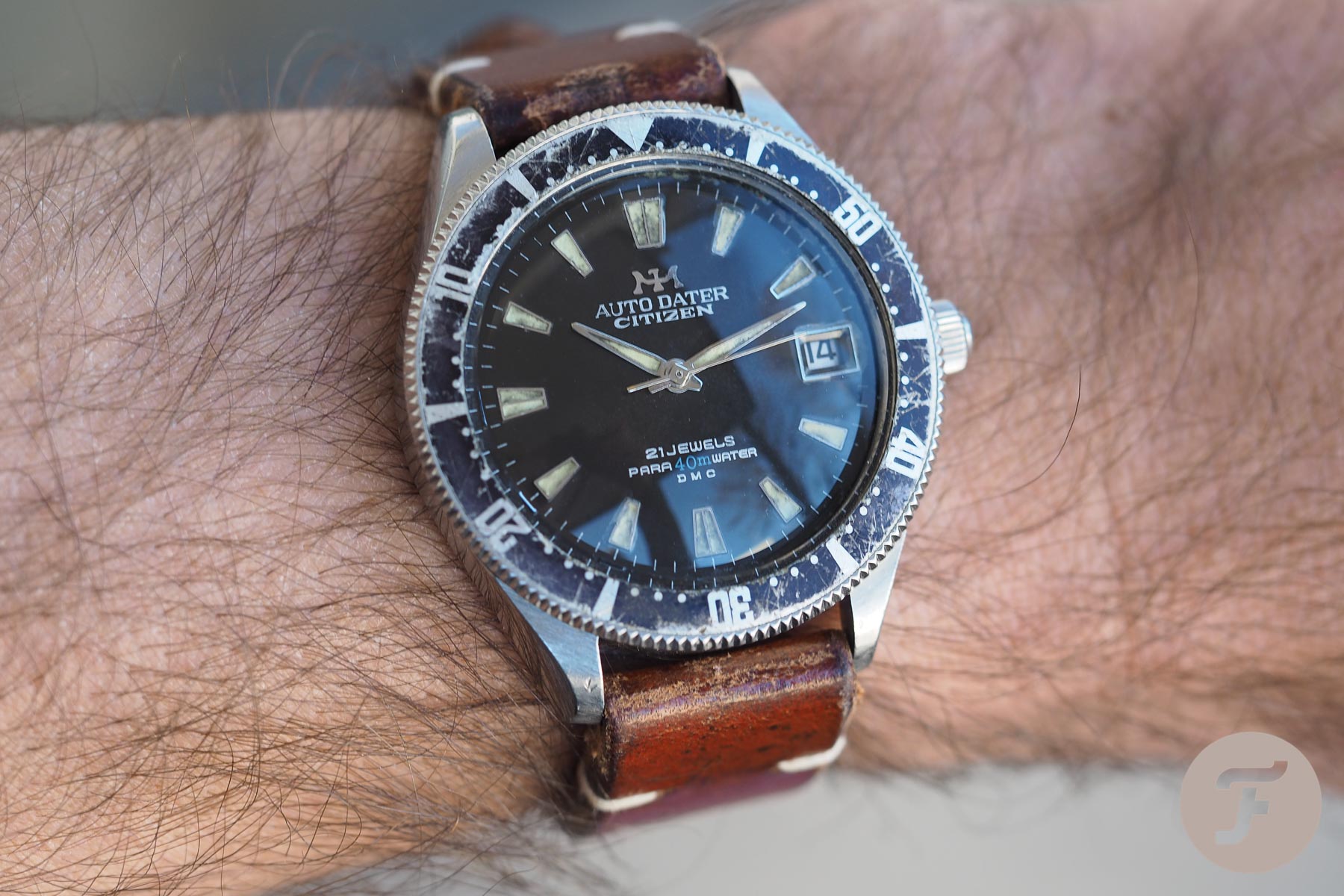 Incidentally, reference ADOS 3001-D shares a more common, but still rare, sibling in the ADOS 3001-DM. You can have a look at it here and note the similarities on the dial, but the differences in the hands. Regardless of which variant you are able to unearth, prepare yourself for a fantastic wrist experience. As mentioned, the 40mm diameter ranks as uncommon for its day. Combine that with a 46mm lug-to-lug and scant 11mm thickness and you’re in business. The purposeful case hugs the wrist and the watch simply feels well built and, dare I say, modern. I’ve paired it with one of my favorite 19mm straps from the retired strap maker, MJLeather. Grab a tropic or whatever you like and it will work with this old beast. 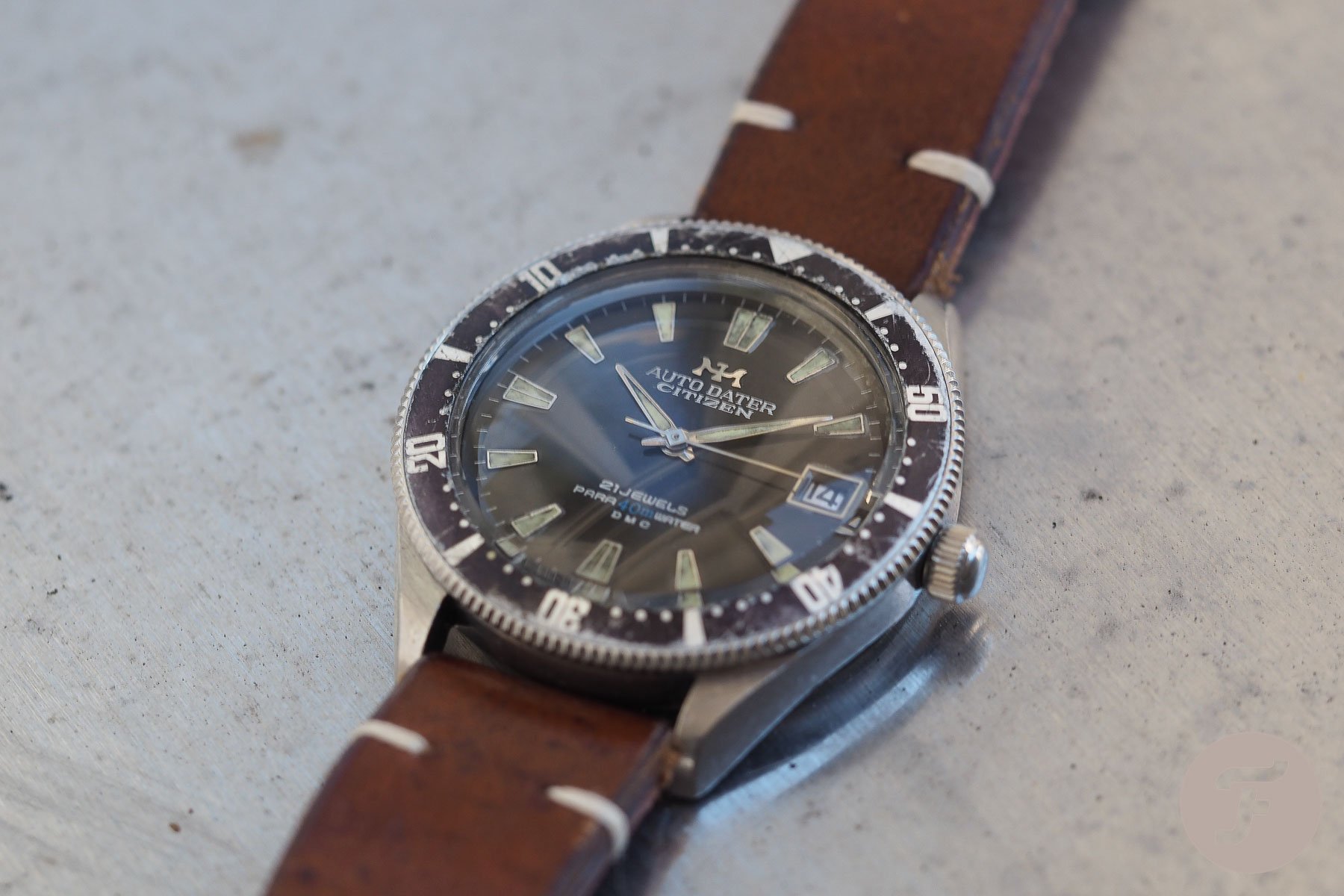 Tracking down any variant of the Citizen Auto Dater 40M takes perseverance. These watches come from a time when a brand like Citizen was exploring new areas and this watch wasn’t around for long. If you’re truly interested, you’ll need to look on Japanese sites for such pieces. Then, lace up your boxing gloves because you’ll likely need to go 12 rounds with other bidders.

Vintage Japanese divers are hot and people are finally waking up to brands aside from Seiko. Therefore, despite the fact that these are seldom known outside of Japan, prepare on spending anywhere from $1,500 for a decent model. When I say decent, your barometer may differ from mine. I love the even patina on this example, but I realize that’s not for everyone.

The Citizen Auto Dater 40M may be cloaked in mystery, but it is a fantastic looking light diver. Even though its depth rating is a tad lacking, I think it can easily stand up to most other Japanese or Swiss contemporaries in the looks and movement departments. Now, if I could only figure out the meaning of “DMC”…