A technological statement that propels us into space and beyond
Jorg Weppelink
comments ...
Share

When Ulysse Nardin introduced its famous Freak in 2001, the idea was bold and revolutionary. More than two decades later, the Freak concept has evolved significantly. What has remained, however, is that all the brand’s Freak creations are still as bold and revolutionary as that original version 21 years ago. These watches feature no dial, no hands, and no crown. Instead, these are timepieces with a revolving movement equipped with a gear train and escapement rotating once every hour to display the minutes. During Watches And Wonders, Ulysse Nardin revealed the new Freak S. The watch features a new, revolutionary movement with two oscillators and it comes equipped with a new case. Oh, and it looks like it’s ready to go into space!

Now that the dust has settled after Watches And Wonders 2022, there is time to look at all the different releases in detail. We will do our best to get some of the most spectacular timepieces in the Fratello offices for a test spin. One of the most spectacular introductions of this year’s show that we did not cover yet is the Ulysse Nardin Freak S. This latest addition to the Freak line-up is quite the masterpiece, and it also just looks incredibly cool. That’s why it is time for a belated introduction to the Ulysse Nardin Freak S. 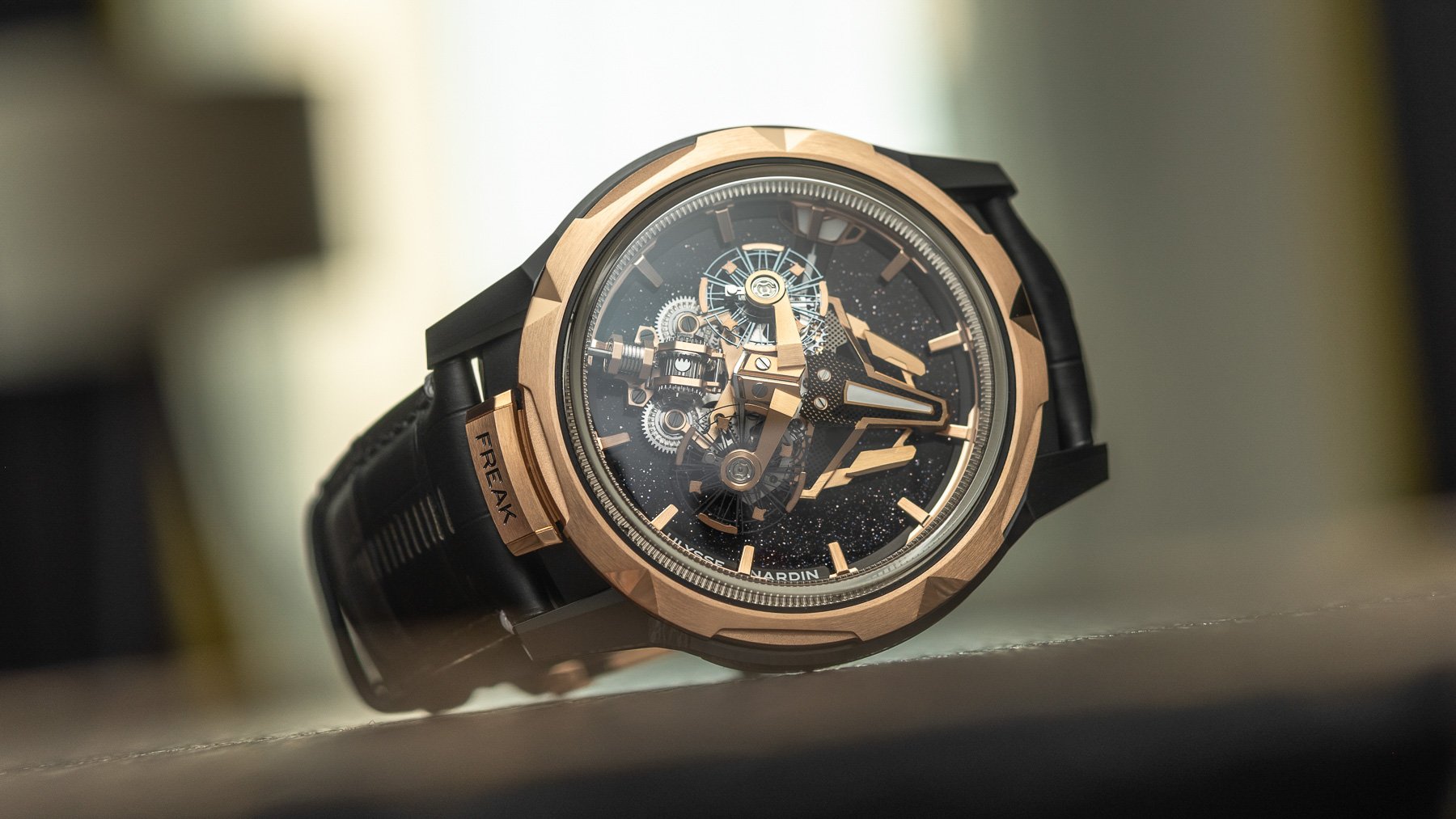 The rediscovery of Ulysse Nardin

But before we get into the Freak S, let’s turn back the clock twelve months. One of my personal favorites from Watches And Wonders 2021 was the Ulysse Nardin Blast Hourstriker that Balazs wrote about. With a brother who used to be a hardcore audiophile, I used to get bombarded with tons of high-fidelity sound reproduction info. German magazines like Audio and Stereo were part of my brother’s daily diet. Along the way, I picked up plenty of information about high-end audio equipment as well. Say “tape deck”, and I’ll start raving about the Nakamichi Dragon. Say “Nautilus”, and I’ll explain that my Nautilus story didn’t start with Patek Philippe but with the Bowers & Wilkins Nautilus speakers. 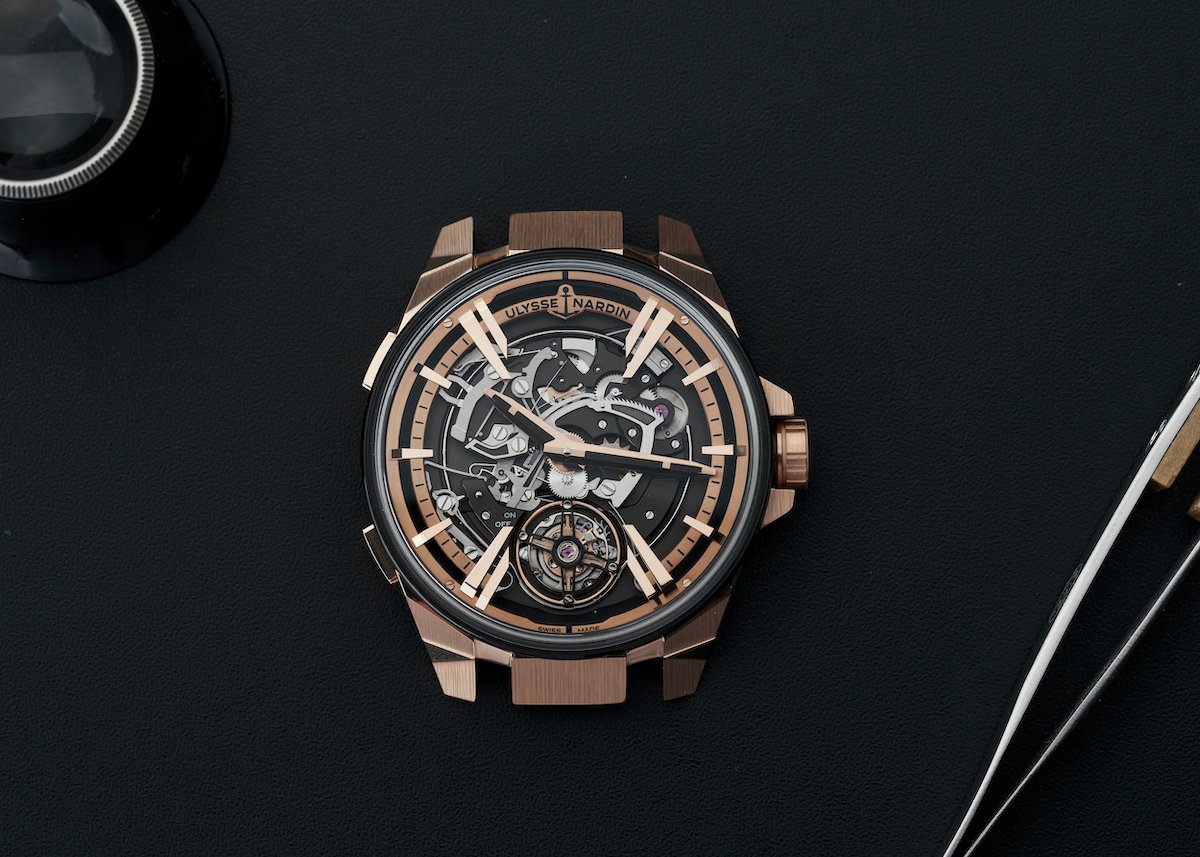 But I’m drifting off here. Back to the Blast Hourstriker. When I read that Ulysse Nardin collaborated with French audio technology company Devialet to develop better acoustics for its revolutionary minute repeater, I was all ears. The companies first collaborated in 2019, but it was this Blast Hourstriker that intrigued me. For the watch, Ulysse Nardin and Devialet worked on a titanium membrane to optimize the striking mechanism’s performance. This joining of two technological worlds brought back so many memories. On top of that, it also put Ulysse Nardin in a different light. This is the kind of technological development I’d love to see more of. It fused two of my greatest passions, and ever since, I’ve followed Ulysse Nardin with greater interest. The experimental character is what defines the brand, and I greatly respect that. 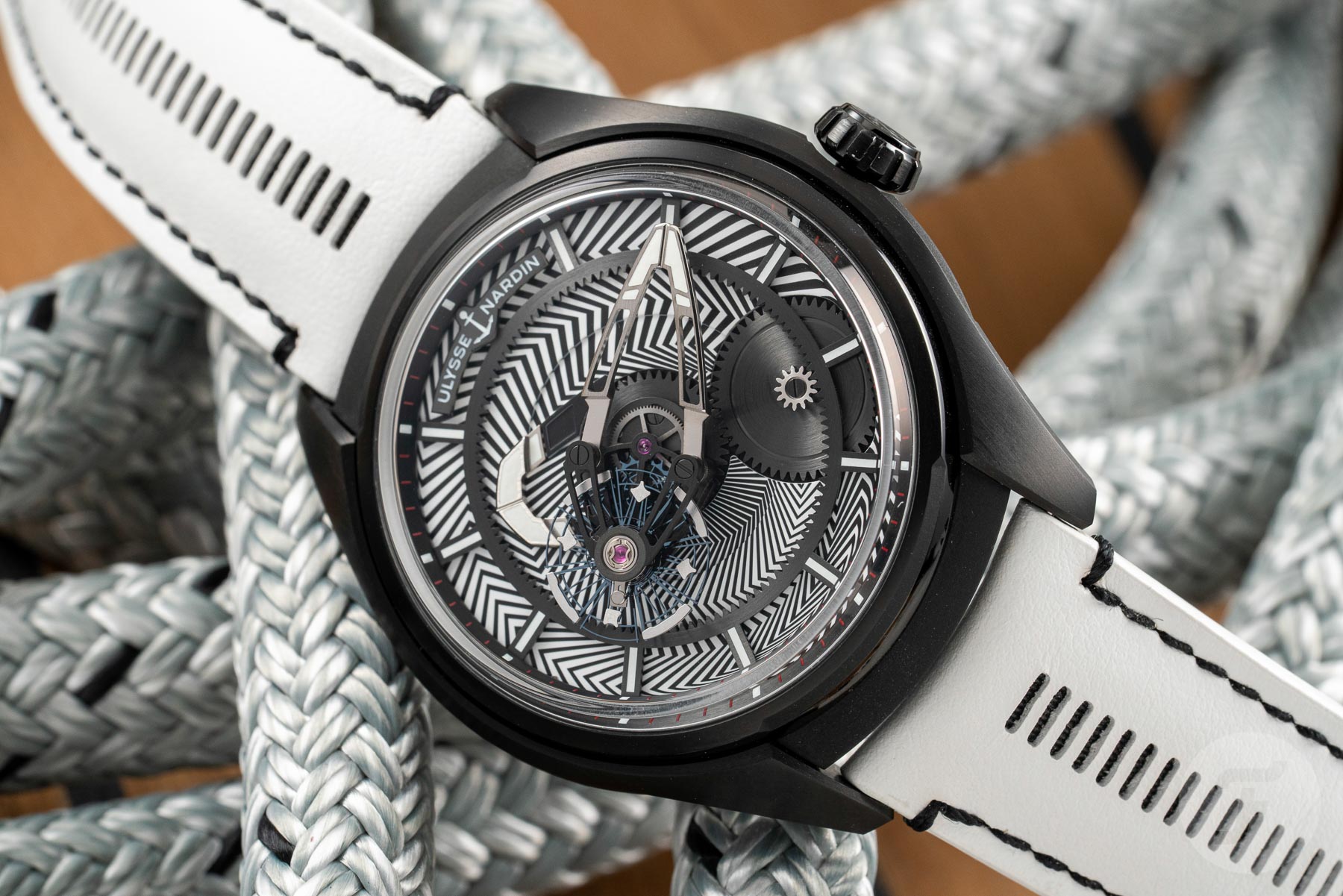 The experimental character came alive when we had the bonkers Freak X Razzle Dazzle in for review last year. Lex wrote a great in-depth review about the watch in which he described it as “captivating, mesmerizing, bewildering, hypnotizing, absorbing.” After having seen and worn the watch, I can attest that all these words are fitting. But despite the rather gimmicky presence, the most fascinating aspect about the watch is the Freak concept. 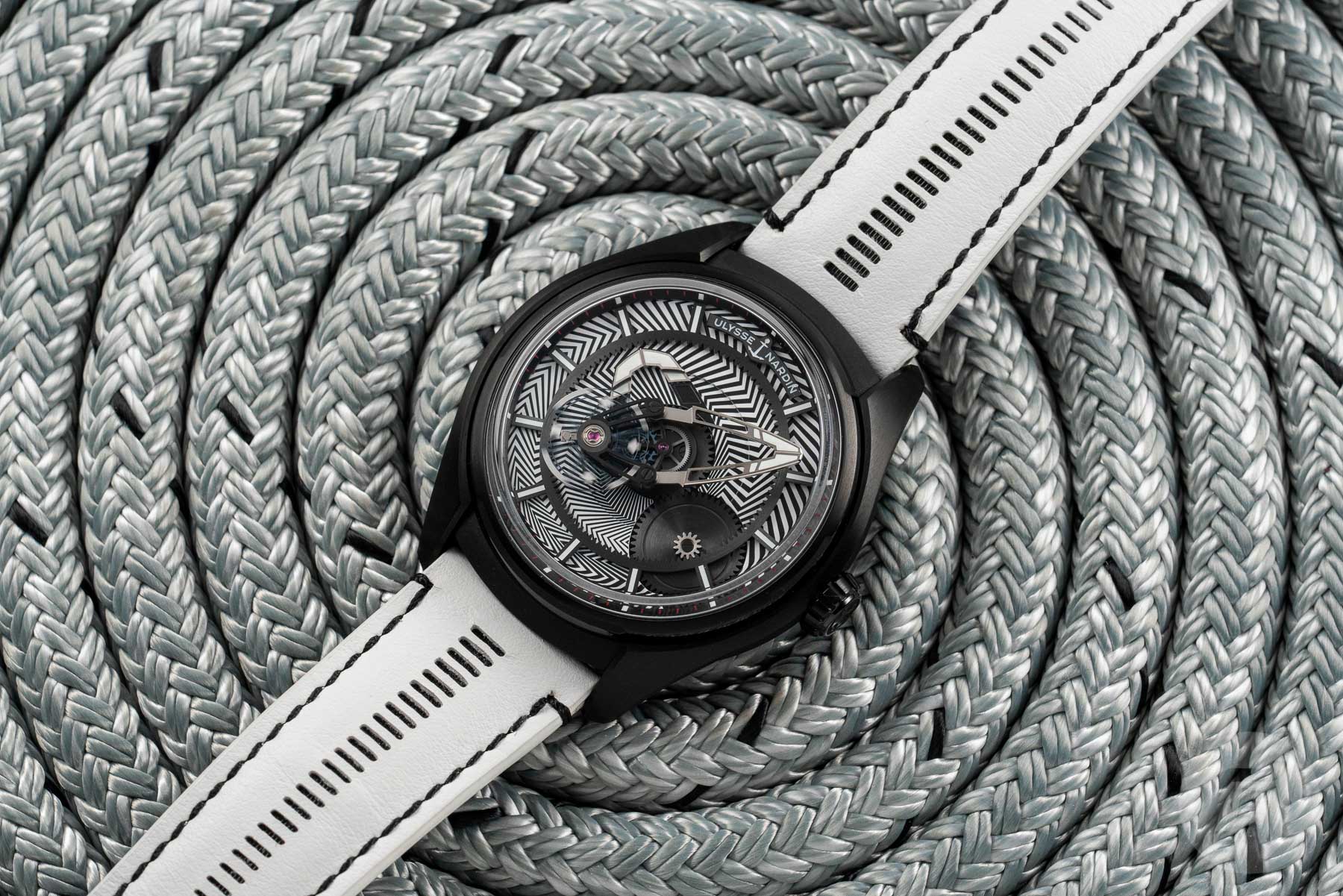 As mentioned in the intro, Ulysse Nardin’s Freak timepieces have no dial, no hands, and no crown. On top of that, the concept also pioneered the use of silicon in mechanical watchmaking. The first Freak introduced the famous revolving movement with a visible gear train and escapement rotating once every hour and indicating the minutes. It was regulated by the “Dual Direct Escapement” with silicon escapement wheels. Besides the characteristic aesthetic of the movement, the bezel to set the time was another stand-out feature. It made the Freak an instantly recognizable series of watches that stood out both aesthetically as well as technologically. 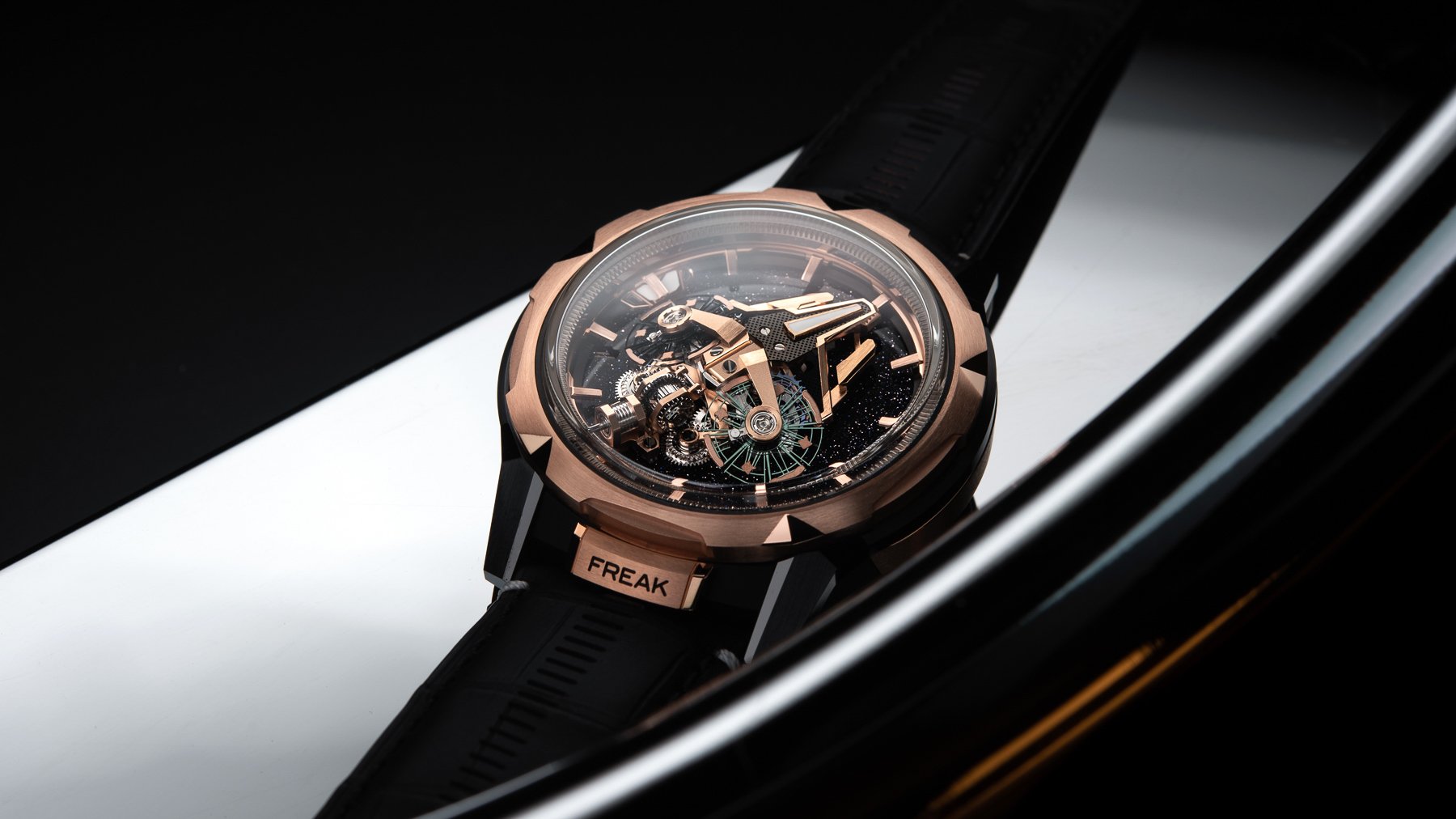 But the series has evolved over the last twenty years. In those two decades, we have seen 12 different iterations of the Freak with the Freak X as currently the most important. The Freak X introduced a smaller 43mm case and also made the concept more affordable than ever — though with prices starting at over €20K, “affordable” is obviously a relative term. But don’t let that spoil the fun and the admiration because the Freak S takes it up a notch or two. The spectacular watch features two oscillators that give the movement its spaceship-like appearance. On top of that, the watch comes with a newly developed case. It features a new design for the bezel, and on the back, you’ll find the brand’s Grinder automatic winding system. 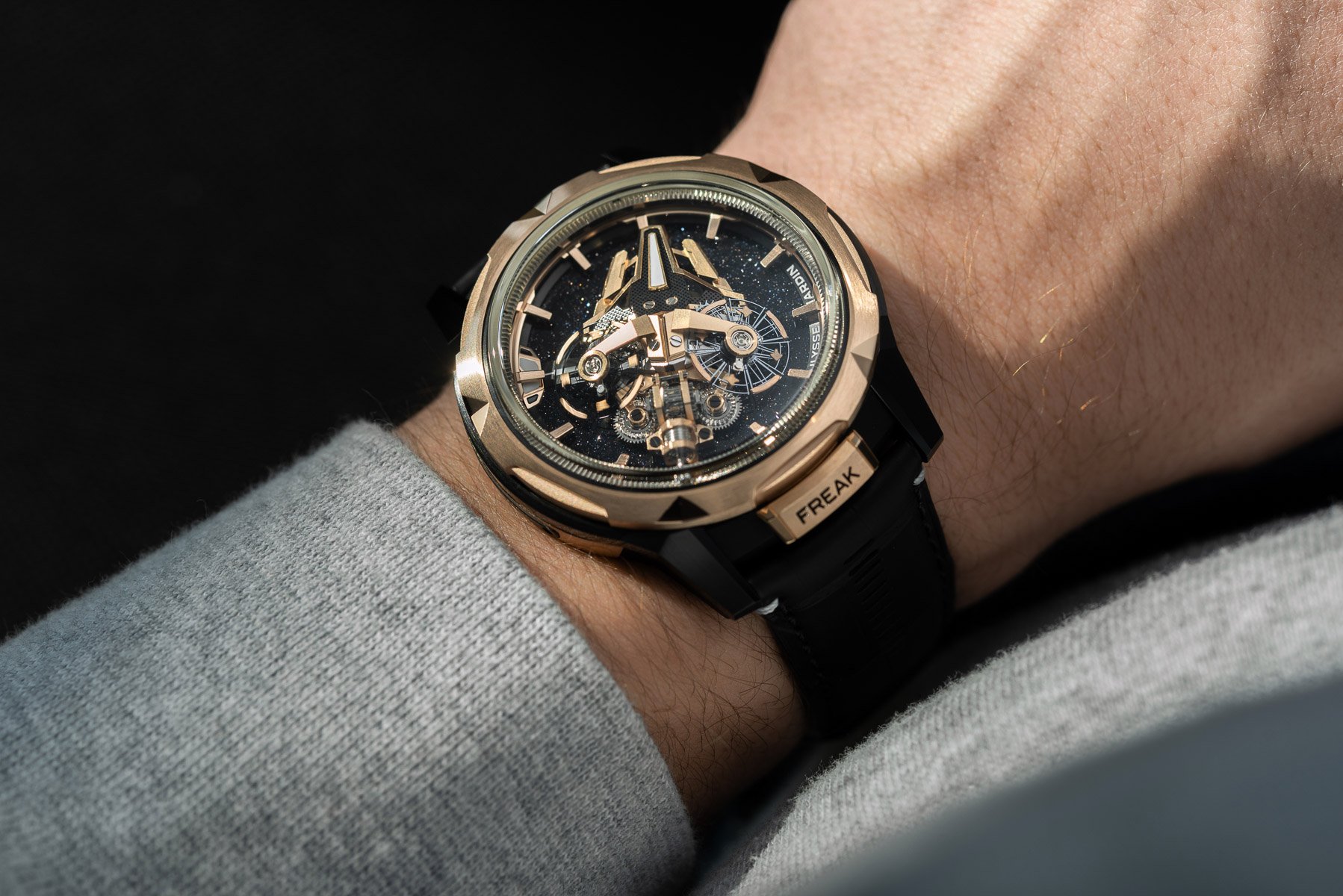 For the Freak S, Ulysse Nardin created a new movement that is the central piece of the watch. The automatic Calibre UN-251 is a signature Freak carousel movement , but it features two oscillators on an incline. This a first for the brand, and the visual effect is stunning! The oscillators are assembled on two distinct planes that are inclined at 20°. They are held in place by two rose gold bridges that resemble the wings of a space rocket. The two oversized silicium balance wheels with inertia blocks are linked by a spectacular differential mechanism. The differential is used to draw the average rate of both the balance wheels for optimized regulation. 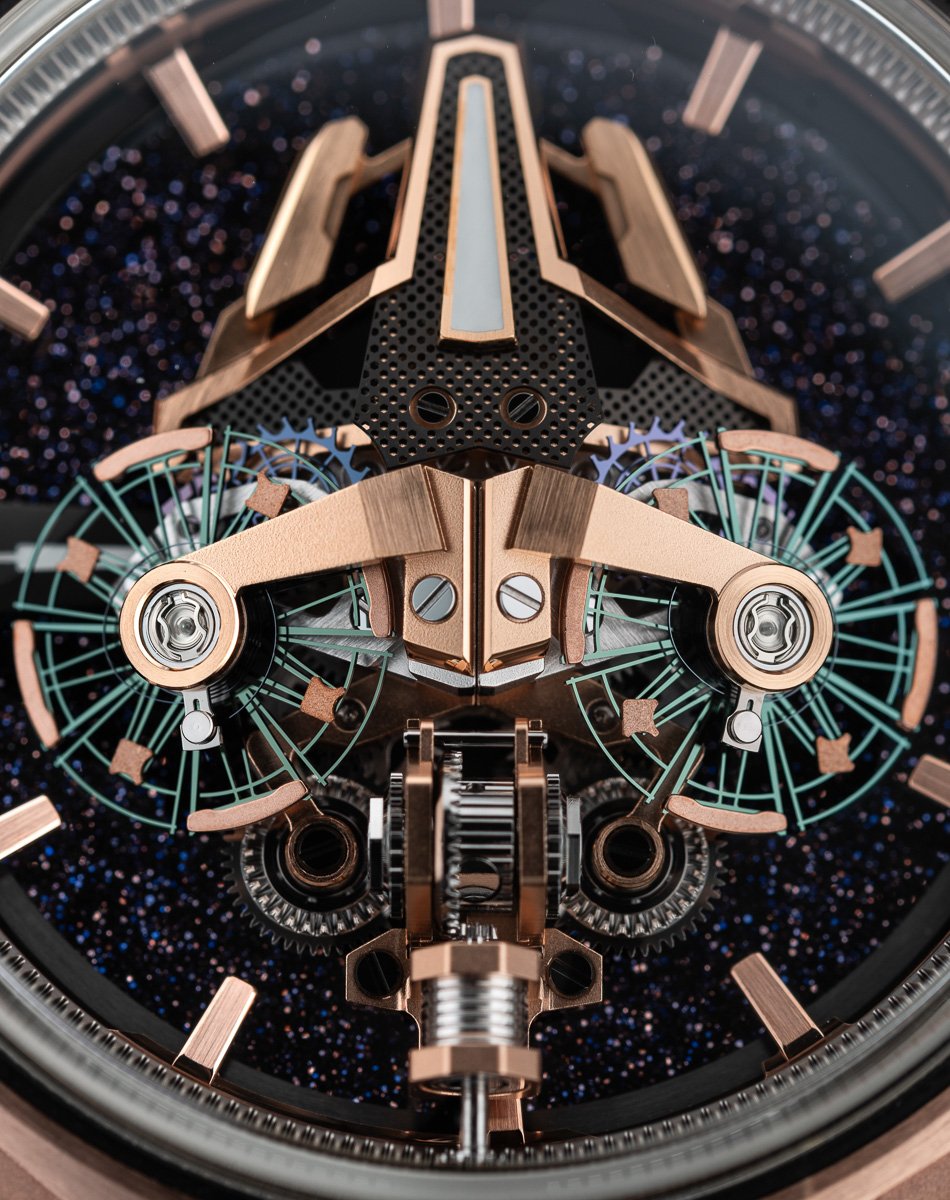 The Freak S is a feast for the eyes

Seeing this mechanism in action is simply spectacular and shows the watchmaking wizardry that Ulysse Nardin has come up with for the Freak S. The balance wheels operate at 2.5Hz or 18,000vph, and the movement has a power reserve of 72 hours. If you turn the watch around, you’ll be able to see the brand’s automatic-winding Grinder technology through the sapphire case back. The brand first introduced Grinder technology in the InnoVision 2 concept watch back in 2017. It was designed to take advantage of even the slightest of movements of the wearer’s wrist to supply power to the movement. It is, however, also possible to wind the movement manually by turning the case back. 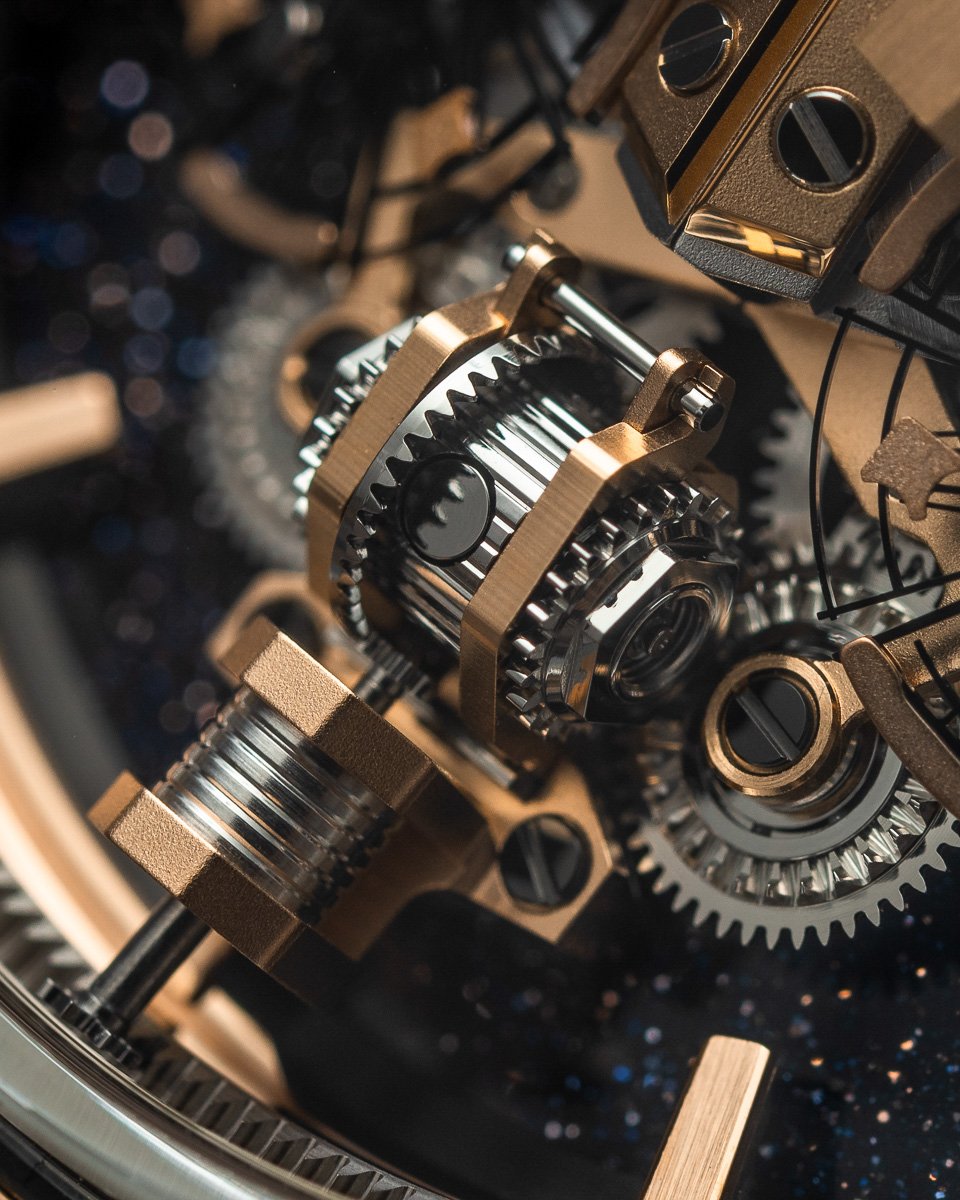 If you turn the watch around again, you can see the rocket-shaped centerpiece making a full rotation every sixty minutes. The nose of the rocket indicates the minutes and a luminescent indicator on the outskirts of the “dial” indicates the hours. As you may be able to tell from the picture above, the differential mechanism is connected to a fixed gear ring on the periphery of the movement to drive the hour indicator. 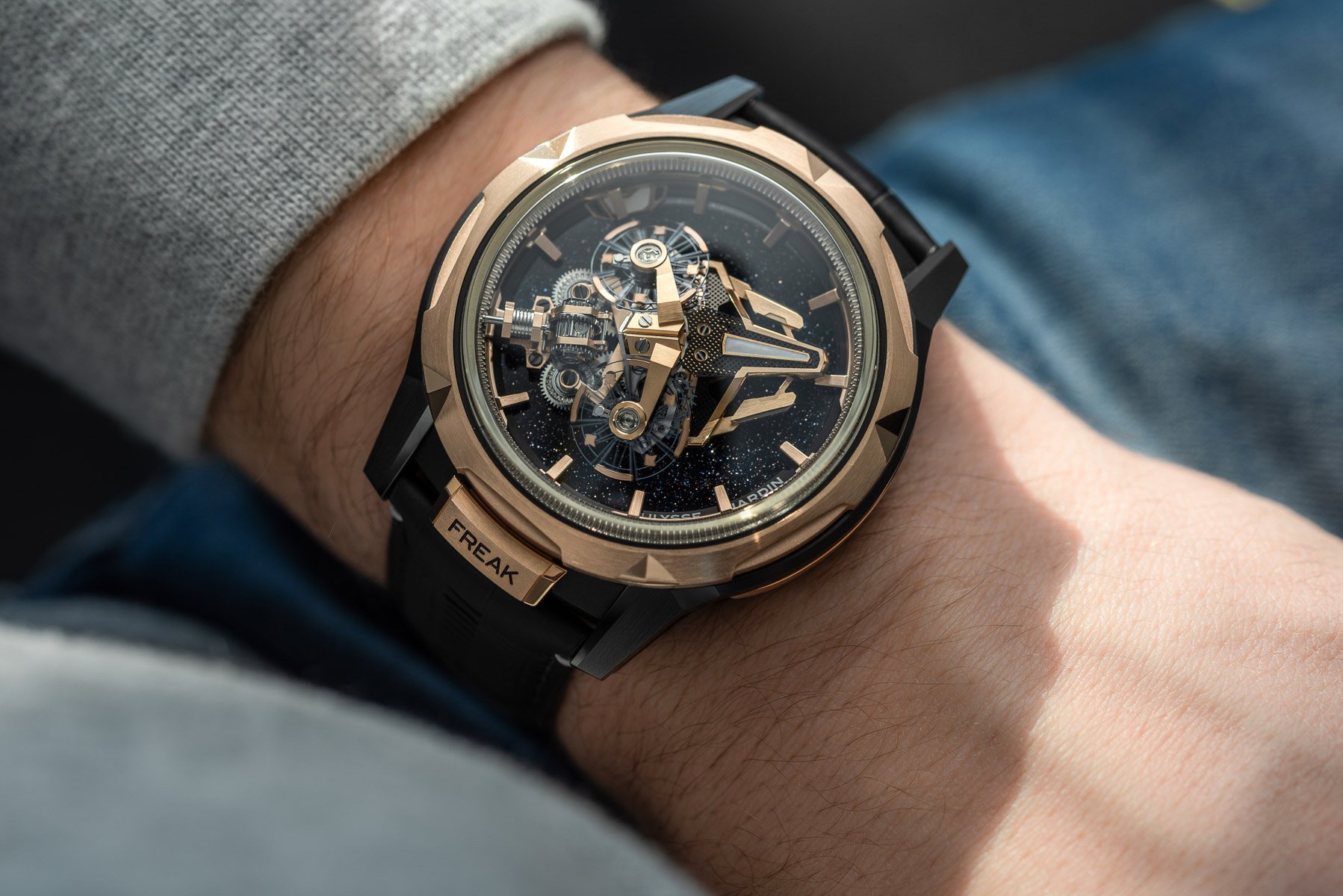 A rocket for the wrist

As you will probably understand, the Ulysse Nardin Freak S is both technically and visually spectacular. The overall styling of the watch is modern, or futuristic, to be more precise. What I particularly love is that the amalgamation of form and function is truly one. There are hardly any parts that are strictly decorative. But there is one that provides a bit of magic. As I mentioned, there is no dial. But the watch does feature a spectacular aventurine decorative plate. It creates a brilliant background for the rocket, as if it is flying through a star-filled sky. 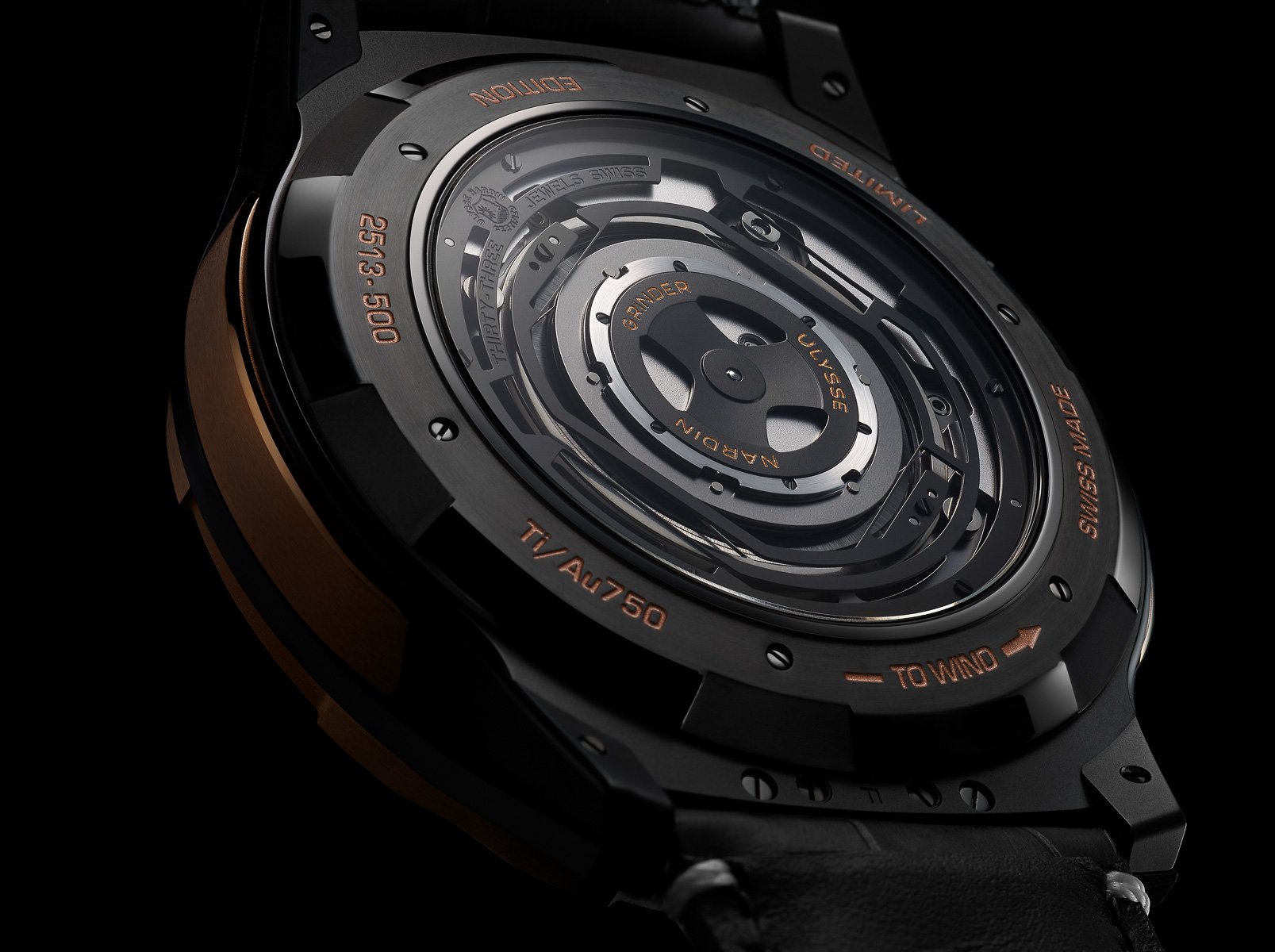 The watch comes with a newly designed 45mm case that is water-resistant to 30 meters. Ulysse Nardin says it was inspired by the original case from 2001. I have to say that despite a definite connection, I like the new case design a lot more. It feels more contemporary than the case of the original Freak. The complex construction combines ceramic, titanium and rose gold. The most eye-catching rose gold part is the bezel that allows you to set the time. The back of the watch is executed in black DLC titanium, and as you can see, parts of the Grinder construction have also been blacked out. As some of you will know, I love the combination of rose gold and black. Seeing the combination of colors and materials bringing the concept of the Freak S to life is stunning. 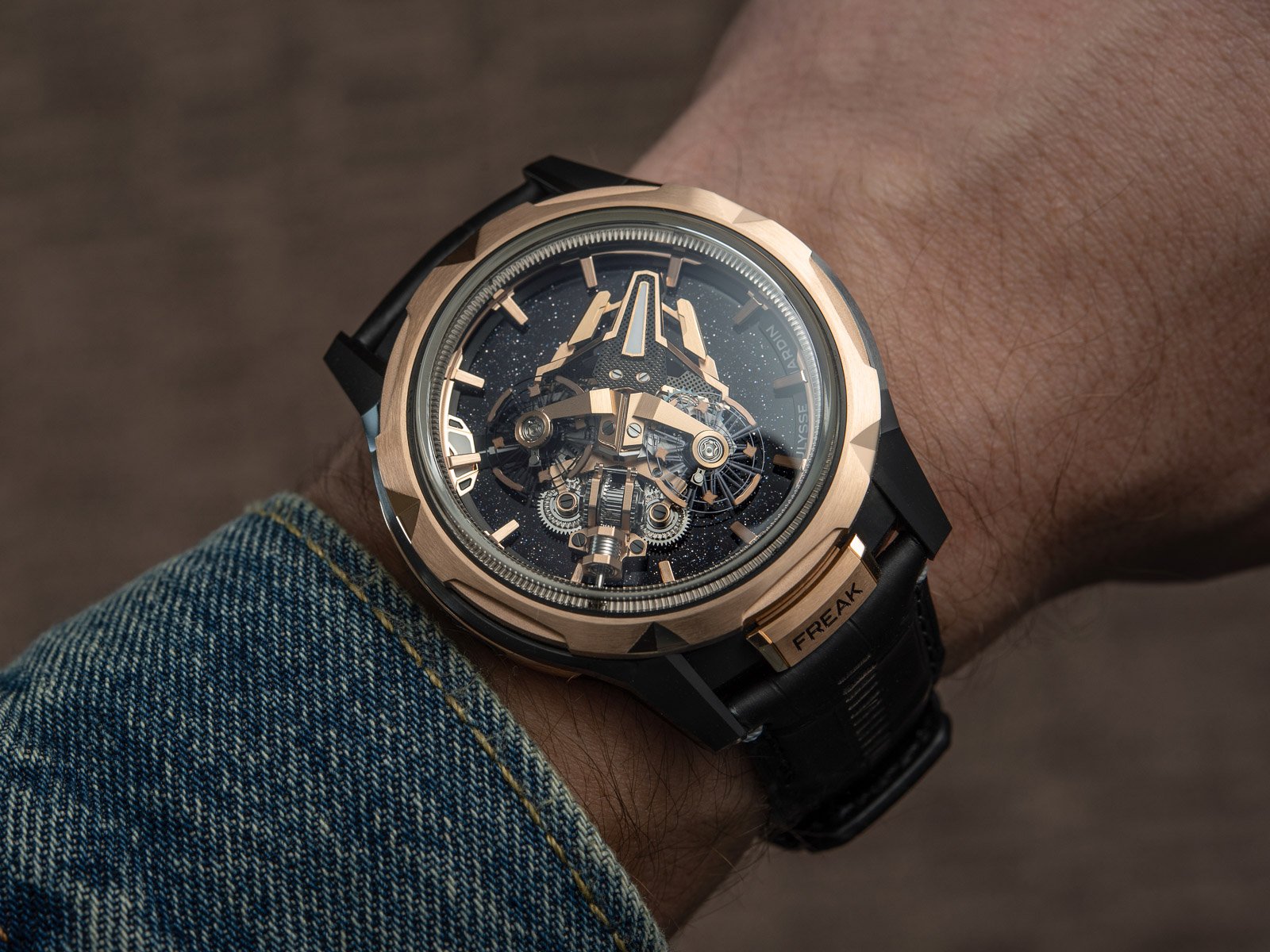 Ulysse Nardin calls the Freak S “a rocket on the wrist.” While that description is quite literal, it also fits the watch perfectly. The whole concept is incredibly well thought out, and the execution is simply breathtaking. Further proof of that comes in the form of the black alligator strap with a sporty cut-out in rose gold. The strap is fitted with a folding clasp executed in titanium with a black DLC coating. The patented triple-folding system operates in a synchronized fashion (SYNC) and opens the clasp with a single click. The Freak S will be produced in a limited run of 75 pieces in total. This year, Ulysse Nardin will produce 40 of these pieces. The list price of the Ulysse Nardin Freak S is €123,500. 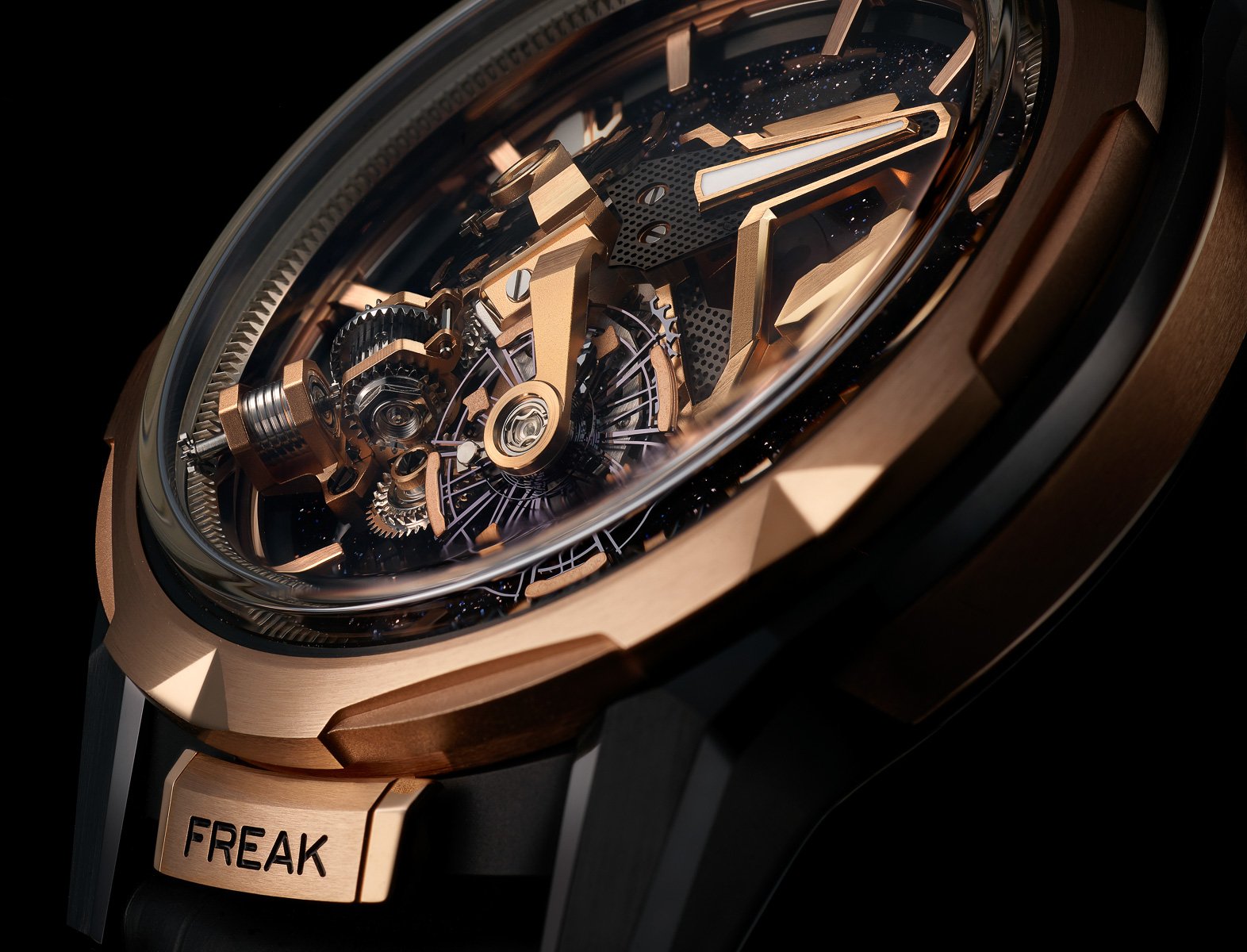 In conclusion, it makes the Freak S a timepiece for the happy few. But the happy few will be very happy indeed. For me, the watch represents something more than just a very expensive and technologically brilliant timepiece. The Blast Hourstrike struck a special chord with me last year that still resonates. Likewise, this new Freak S is further proof that the brand is capable of brilliant things. Ulysse Nardin shows its techincal mastery in the automatic double oscillator with differential, silicium components coated with a layer of artificial diamond for better performance, and the Grinder automatic winding system. In terms of materials, the case construction in rose gold, black ceramic, and titanium is top notch. And lastly, design-wise, with the space rocket at the center of the dial, this new Freak S truly takes the Freak concept into new territory.

Let us know what you think in the comments below. For more info on Ulysse Nardin, check out the brand’s website here.

Hot Topics
Are You Still After An Omega × Swatch MoonSwatch?
108 comments
Introducing: The New Seamaster Professional 300M 60 Years Of Bond — With A Special Animated Case Back
107 comments
Introducing: The Oris Divers Sixty-Five Fratello Limited Edition
104 comments
It’s Time To Invest In A Dress Watch — Our Picks From Breguet, Omega, Grand Seiko, And More
74 comments
Rolex Is Going Certified Pre-Owned
66 comments
Popular
A Question From A Reader: “Which Modern Speedmaster Is Closest To The Original Moonwatch?”
Robert-Jan Broer
14
Rolex GMT-Master History And Overview Of All Major References
Robert-Jan Broer
18
(From The Archives) Shut Up & Read The Truth About Cartier Watches
George Cramer
21