Forgive me if you already know of Collective (yes, there’s no “The”). I was not quite as fortunate as you until these past couple of weeks. I wasn’t acutely aware of Collective even though I had previously seen its collaboration with Zenith among my daily watch news scrolling. It was a handsome watch in a clear and stark white & grey color scheme. Now the fine folks at Collective are back with their third collaborative project, one that got me incredibly excited when I first caught wind of it: the URWERK UR-100V P.02.

I am fortunate to get the inside track on many happenings in this beautiful industry before they become general knowledge. Such is the privileged position of being a journalist. This project is one of those I am honored to have been privy to ahead of today’s launch. I’ve made no secret of my love for URWERK here on the pages of Fratello. I mean, it’s worked out pretty well for me, as whenever the brand sends over something new, it invariably lands in my inbox. Winner! 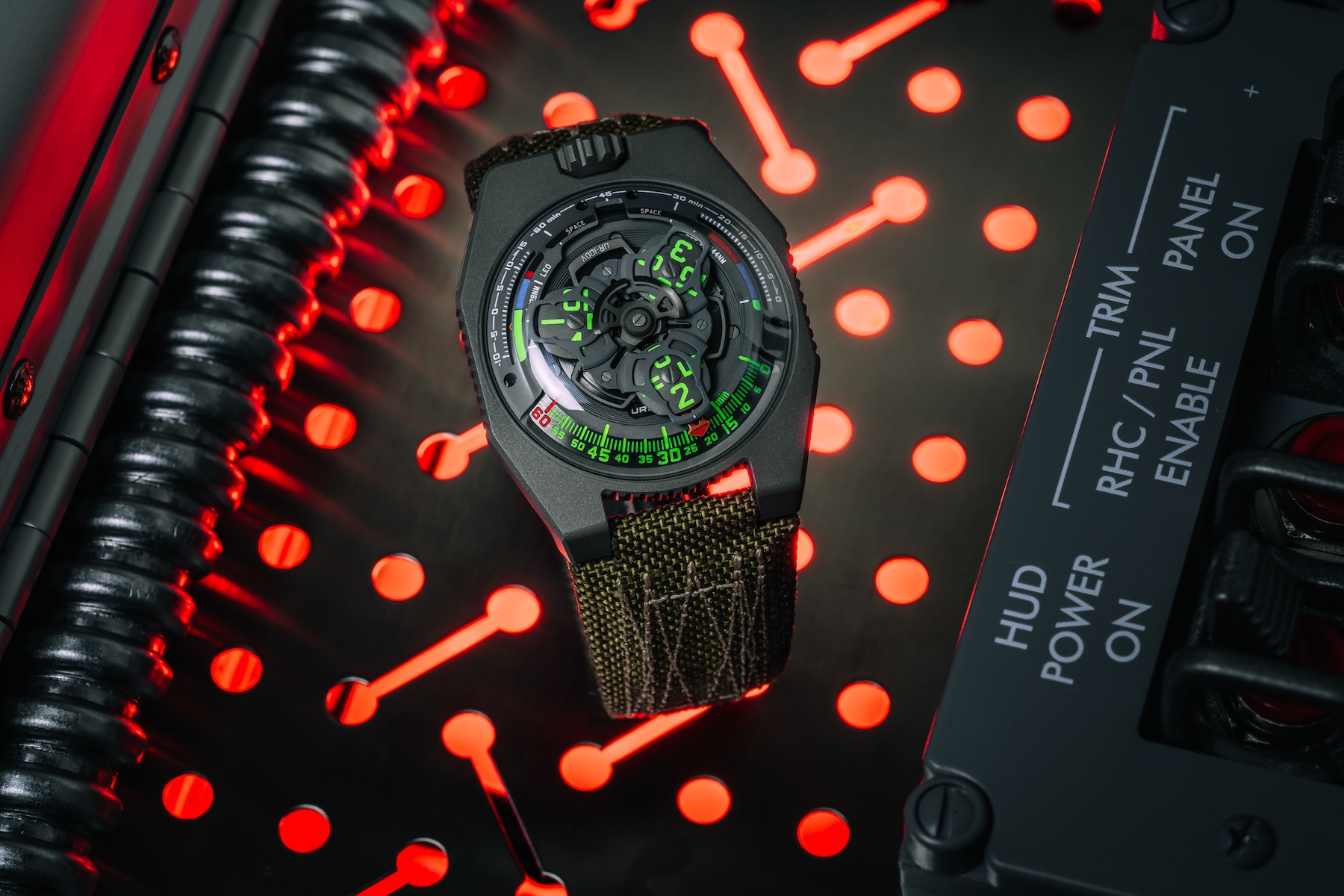 Introducing the UR-100V P.02 for Collective

When the URWERK UR-100V P.02 for Collective came to our attention, it was apparent that this was more than a regular new watch release. This was a collaboration between URWERK and Collective. So two things stood out here right away to me. First of all, this is the first time URWERK had made a watch in collaboration with not just one partner but two (not counting the ONLY WATCH project with De Bethune). Secondly, the collaborative partners, in this case, are the mysterious Collective (Not exactly a household name in the industry…yet!) and the Intrepid Sea, Air & Space Museum in New York.

“We are just boys” — Martin Frei

It’s a fascinating point and a noteworthy one too. This shows that URWERK is about passion rather than posturing. For its first public collaboration, it chose a relative newcomer to the industry. URWERK clearly looks for a partner that understands and appreciates what it stands for and can bring something to the table creatively. As Martin Frei said in our URWERK x Collective podcast, “We are just boys,” meaning that the brand does what it enjoys. It works on projects that excite, and in this case, Collective’s idea and inspiration struck just the right chord with Martin and Felix. After all, if you don’t enjoy your work in this industry, you’re doing it wrong!

Remind me – What is Collective?

Oh, you don’t know? That’s OK. I wasn’t aware of them before this project, but they are now firmly on my radar! Collective, or Collective Horology to use its full name, is a membership-based community started by childhood friends Asher Rapkin and Gabe Reilly in California. Collective was formed to build deeper relationships among like-minded collectors and develop unique collaborative watches and experiences for its members. The Collective Series is an annual collaboration with their favorite watch brands. At the same time, the Portfolio Series is a showcase for independent and high-horology watchmaking. Somewhat unsurprisingly, it has quickly grown into a global community, partly thanks to its ongoing collaborations with brands. I think we can all agree that this project with URWERK and Intrepid is its most ambitious and successful to date! 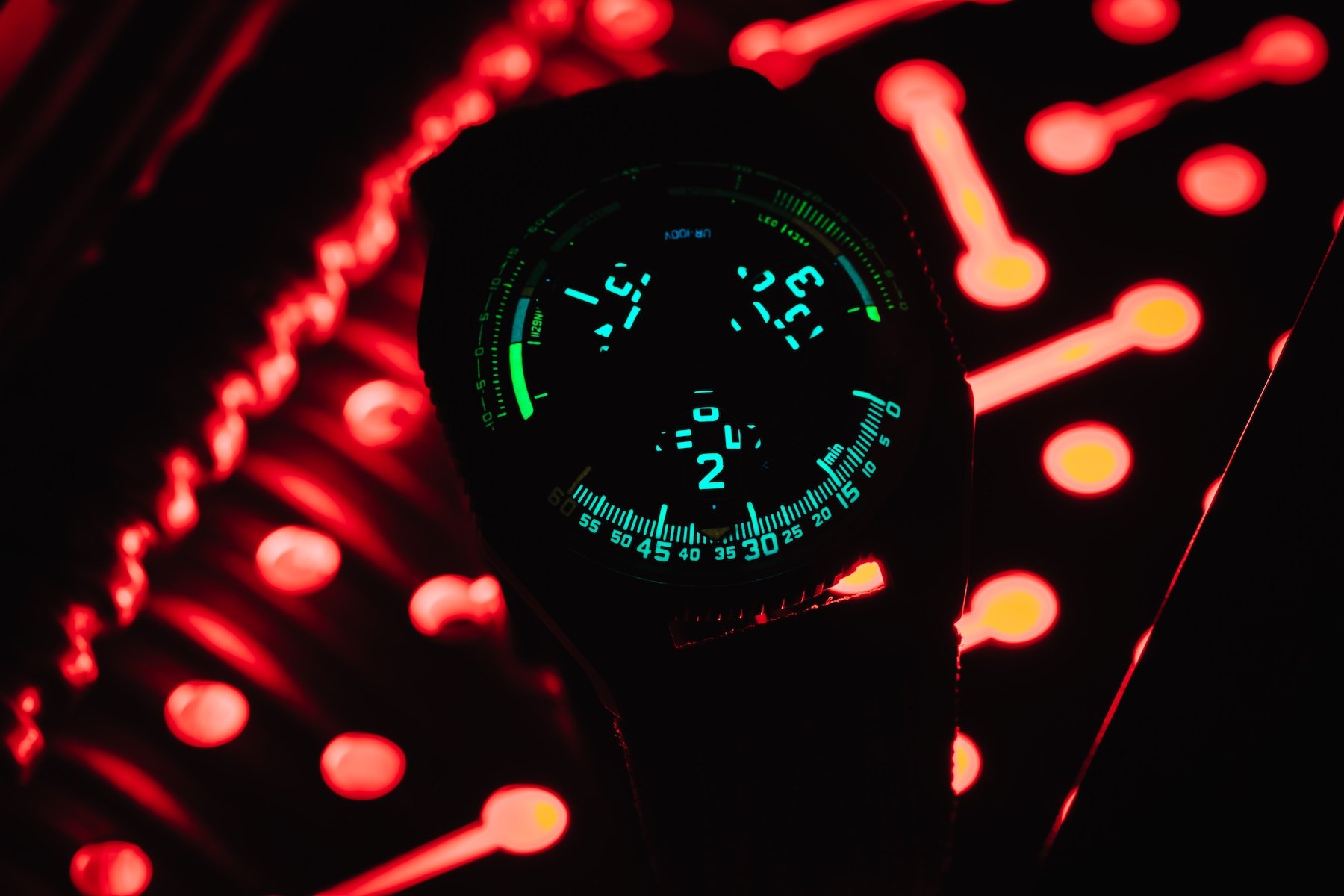 OK cool! So what is Intrepid?

The Intrepid Sea, Air & Space Museum is a nonprofit, educational institution featuring the legendary aircraft carrier Intrepid, the space shuttle Enterprise, the world’s fastest jets, and a guided missile submarine. Pretty cool, huh? Through exhibitions, educational programming, and the foremost collection of technologically groundbreaking aircraft and vessels, visitors are taken on an interactive journey through history to learn about American innovation and technological advancement. Basically, it’s the kind of place I’d dream of visiting. I’m sure I’m not alone in this.

…for a peek behind the curtain, you should definitely give it a listen!

That leads us to the fantastic URWERK UR-100V P.02 for Collective. I am not going to go into the whole backstory of how this watch came to be. Why? Well, as fascinating as it is, it’s not my story to tell, and I could not articulate it as well as those involved at the ground level. As I alluded, above, we recorded a podcast with Asher Rapkin of Collective and Martin Frei of URWERK. I recommend giving it a listen as it sheds some light on how the project came to be and how it developed. It’s a really valuable insight and one that many such projects don’t tend to make public. So for a peek behind the curtain, you should definitely give it a listen!

Let’s take a look at this watch, then, as while it is clearly a URWERK UR-100, it has some subtle and exciting tweaks that make it a more significant evolution than it might initially seem at first glance. 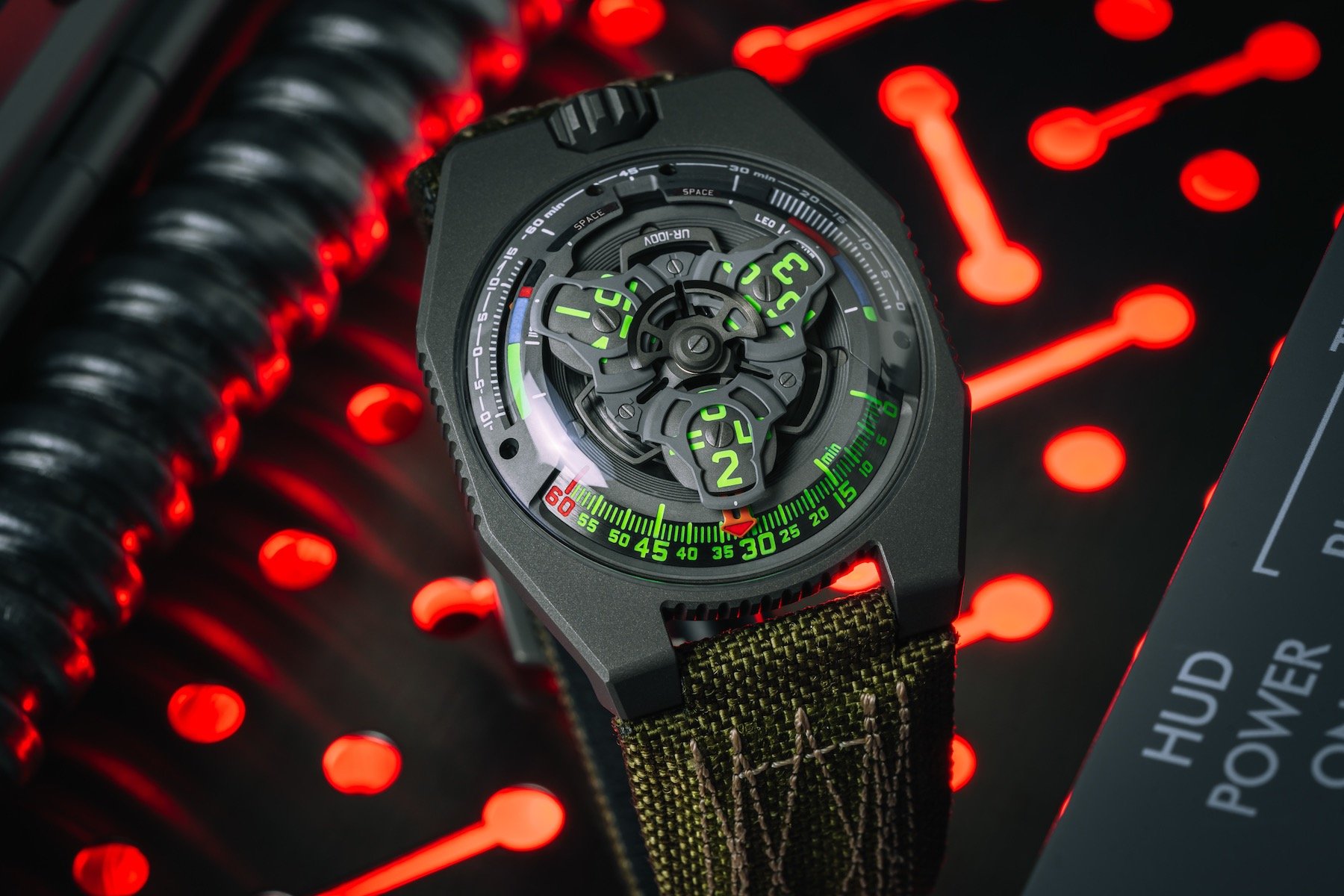 On the upper portion of the dial of the standard UR-100V, there are two scales. These are the “Spacetime” complications. The first measures the distance the Earth rotates at the equator (555.55km over 20 minutes). The other scale displays the distance the Earth revolves around the Sun (35,742km over 20 minutes). Well, for the URWERK UR-100V P.02, the guys at Collective wanted to do something a little different here. It was essential that their take on the UR-100V had to offer something unique, a viewpoint I one hundred percent empathize with. The inspiration for this change came from the very inspiration for the collaboration.

The nerves and the anxiety coursing through your veins…

The Intrepid Sea, Air & Space Museum in New York is the final resting place of the Space Shuttle Enterprise, where it remains on display to this day. The team behind the project got thinking and wondered what the final countdown during the launch initiation must have felt like. Sitting there in the cockpit of a large metal tube literally filled with explosives. The nerves and the anxiety coursing through your veins…

The URWERK UR-100V P.02 aims to give the wearer an idea of the launch process. The usual Spacetime complications are replaced with scales that track the space shuttle program’s typical launch and landing sequences in minutes. They are visible through apertures that also show the approximate location of the shuttle at each phase of takeoff and landing. 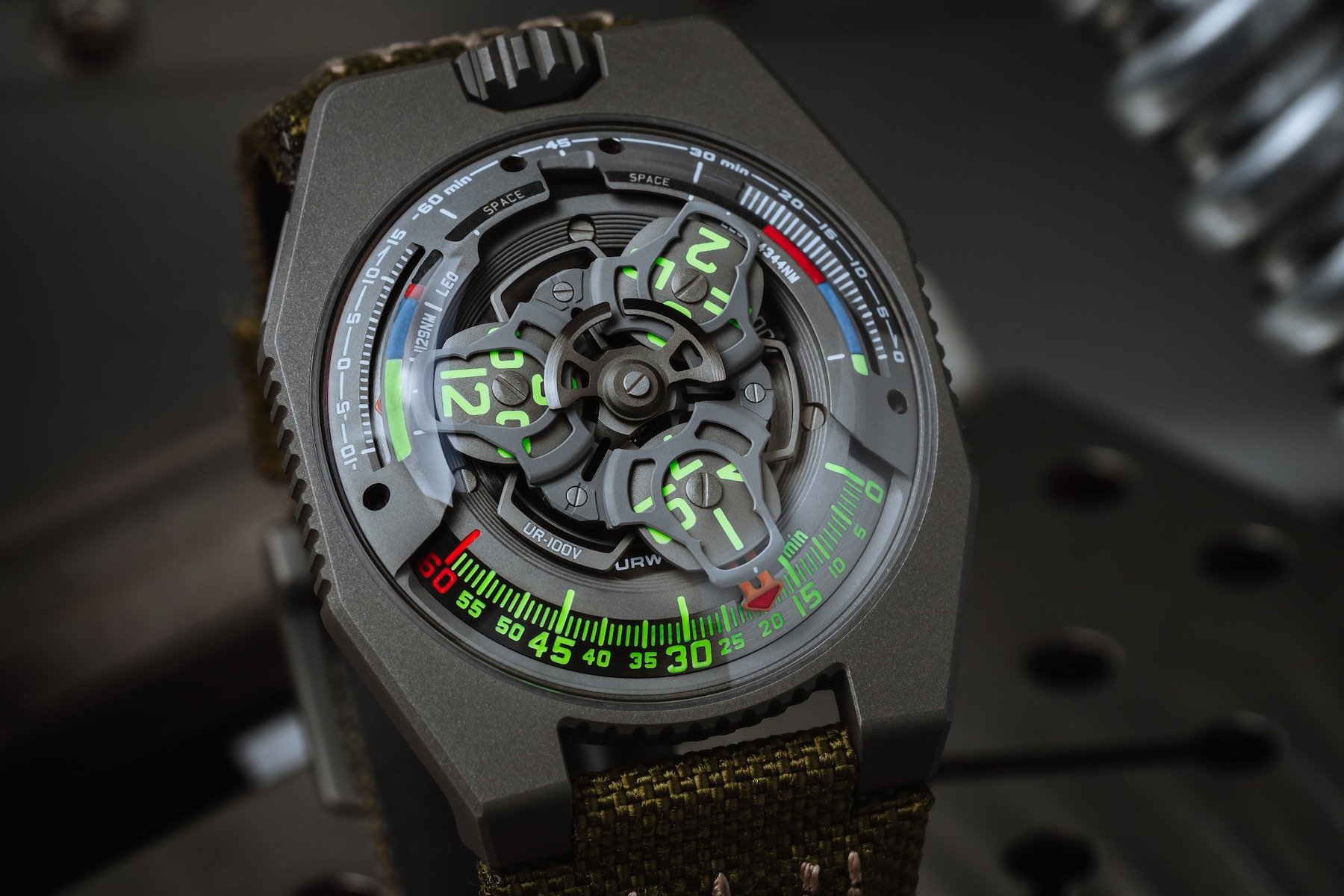 Pretty colors! What do they mean?

On the left-hand side, we see the launch process:

On the right-hand side, we see landing:

I always used to feel silly thinking that I’d like to visit space one day. A part of which would be to experience such a launch sequence first hand. That said, Virgin Galactic made its maiden flight just last week. That flight makes the impossible seem like it “may” become possible within my lifetime. Whether or not the price is possible, that’s a whole different question… 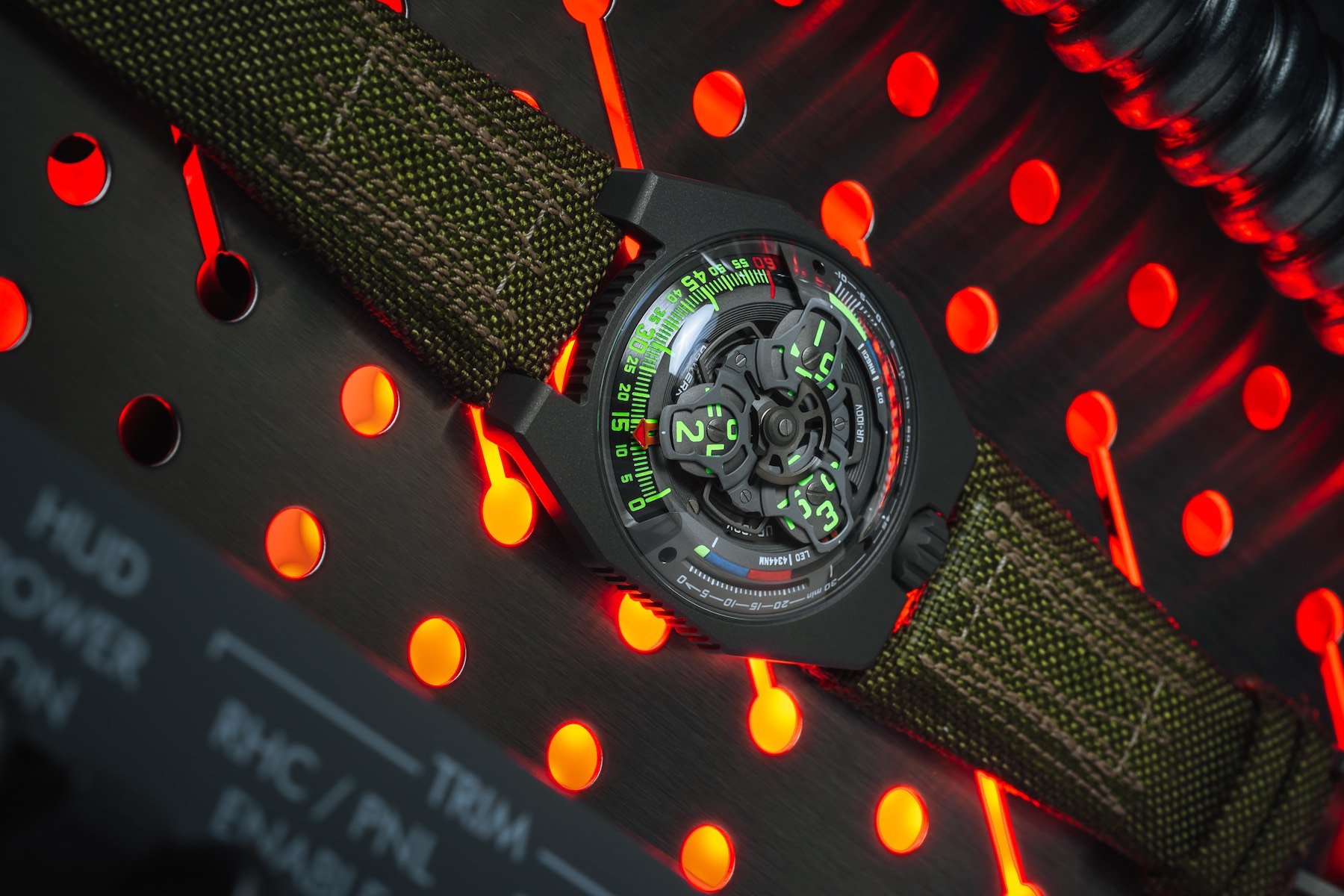 Inside the UR-100V P.02 is the new caliber 12.02. The redesigned movement allowed for a tweak to the satellite carousel, bringing the hours closer to the minutes as they travel along the 60-minute scale. The result is an easier and more intuitive reading of the time along the ower section of the dial. It’s far more logical in my mind. My only very minor point with the carousel is that much of the other numbers on the current wheel are visible. While the current hour is much better placed, and this is an improvement over the previous iteration of the movement, I’d love to see the non-current hours framed and hidden slightly differently. But hey, here’s the inner “wannabe” watch design in my head speaking out again. Don’t worry, I’ll put him back in his cage now. 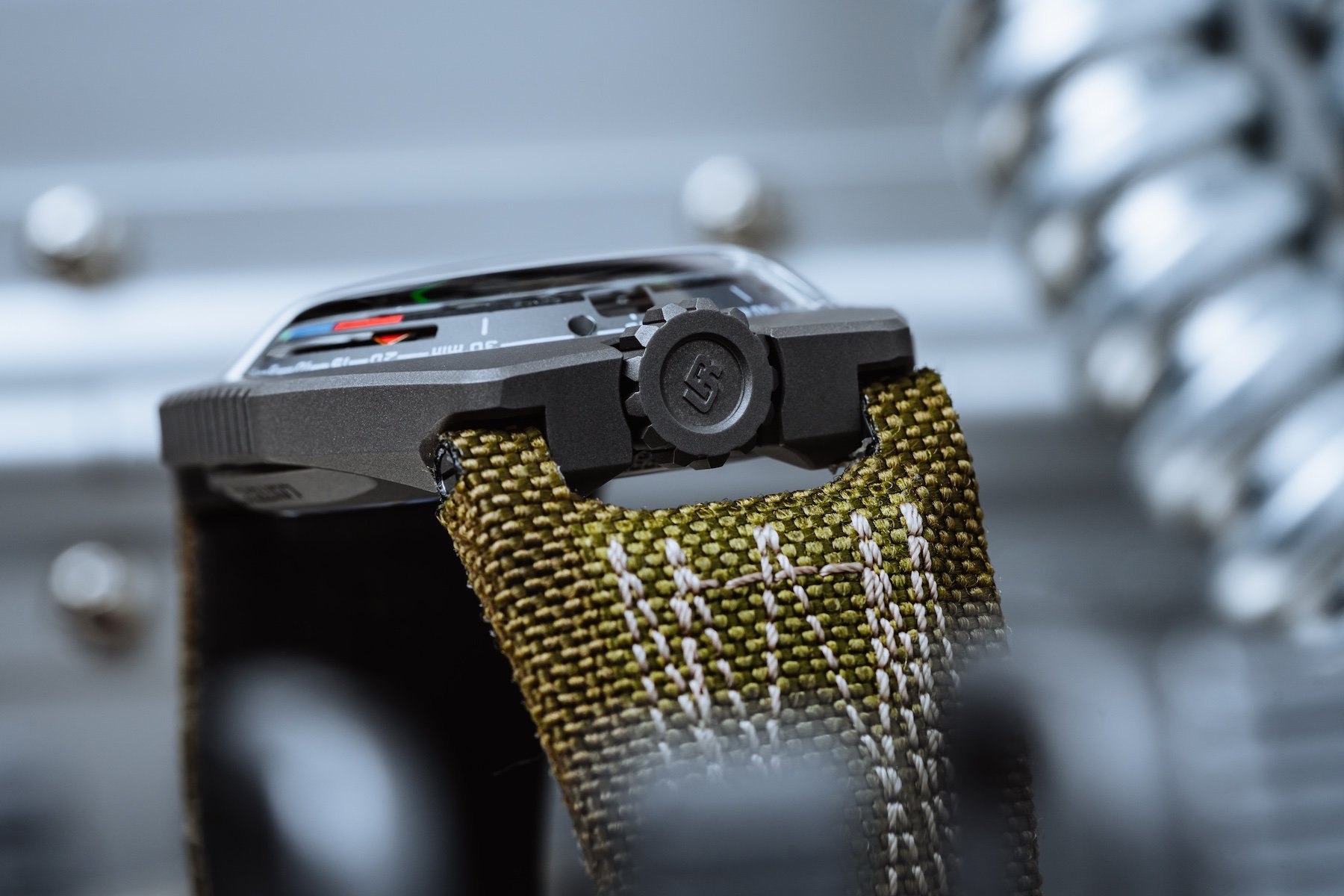 Strapping in ready for launch

You will likely notice that the strap chosen for the UR-100V P.02 is a departure from the usual strap offerings URWERK attaches to its watches. As with all elements of URWERK’s watches, the strap draws its design cues from the lead inspiration. In this case, as we know, it is the Space Shuttle Enterprise. The color and unique stitching pattern are a nod to the restraints (seatbelts) used on the shuttle. It’s quite fitting as the strap is the watch’s seatbelt on your wrist. The strap features a Cordura upper with a rubber insert over the strap holes to ensure longevity. The lining is smooth and supple calf leather, chosen for comfort. 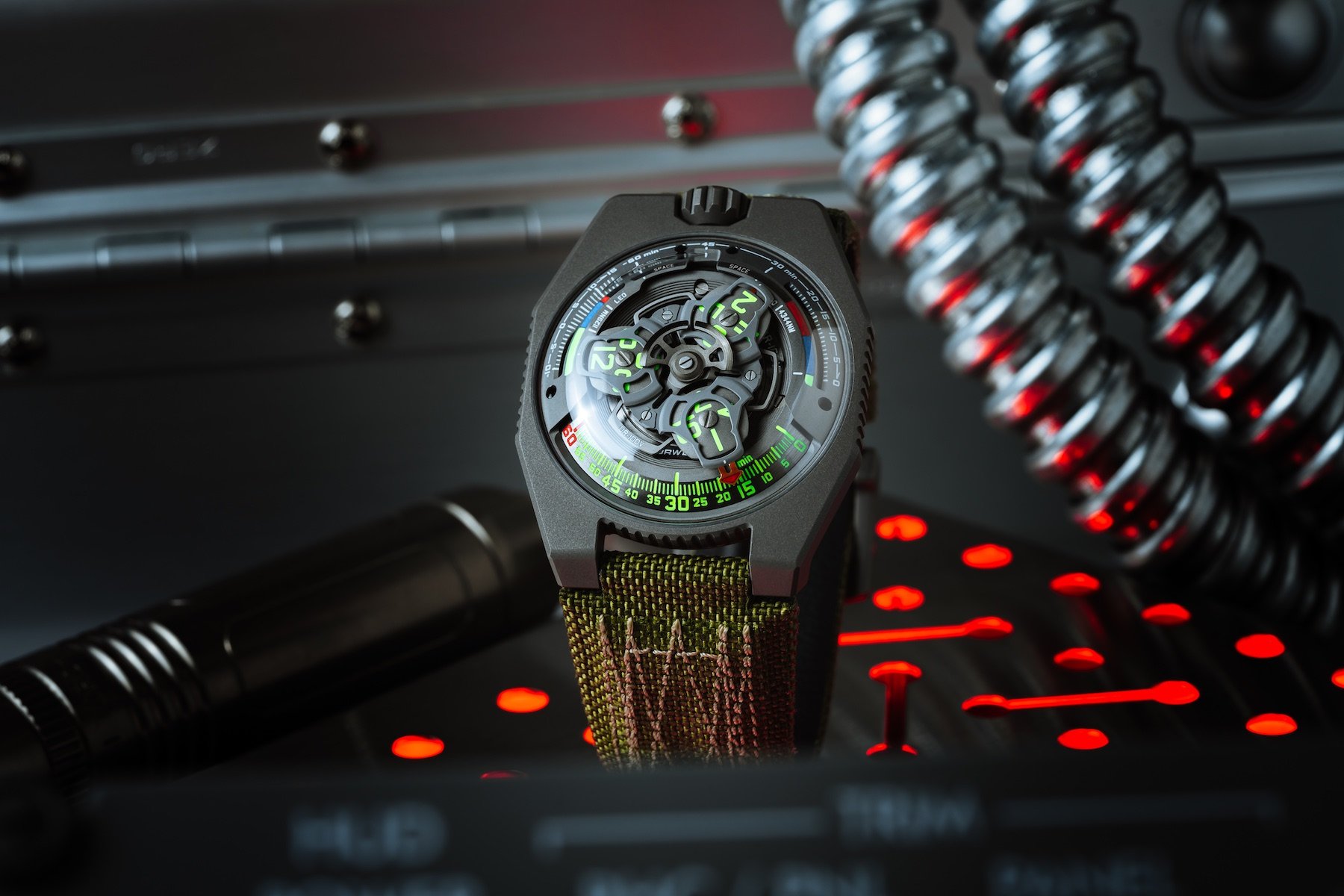 A redesigned box and manual

With so much effort and thought going into the watch’s design, Collective and URWERK would be remiss in using the standard box and manual. With the new launch/landing apertures, the manual “had” to be redesigned, so why not the box too? Both received a facelift, but the manual goes beyond a simple operation instructional document. URWERK used the new manual as an opportunity to explain the launch and landing process in detail. This allows the wearer to experience the concept of the Space Shuttle mission with greater understanding and appreciation.

While I have not seen the new box or manual, I have zero doubts about the level of detail and attention that have gone into perfecting them. With Martin Frei’s background in design, this is somewhat inevitable. I just hope I have the chance to see this watch in the metal one day. 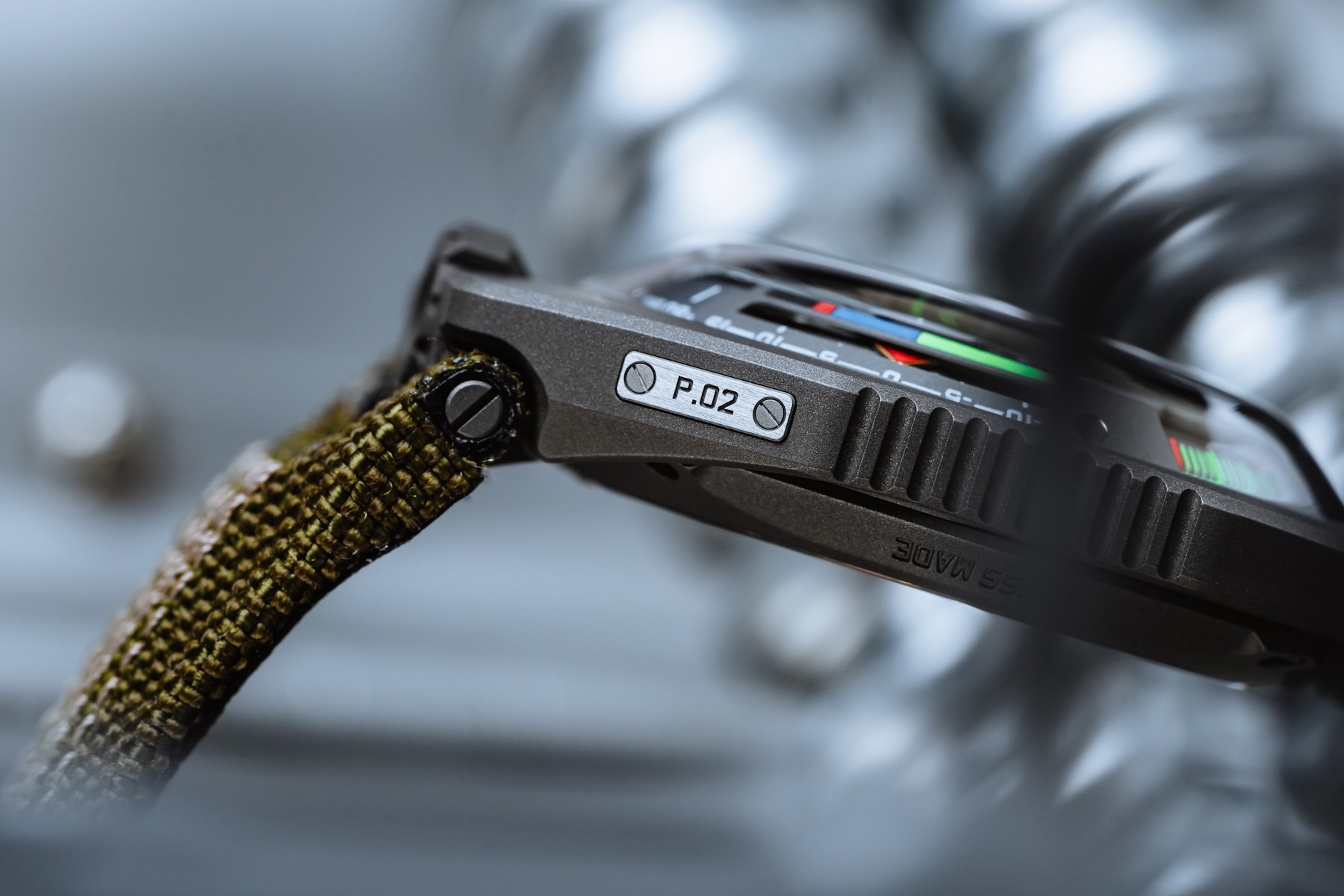 So there we have, in a nutshell, the incredibly impressive three-way collaboration between URWERK, Collective, and Intrepid. There’s no hiding the fact that I love it. Since falling in love with the brand, URWERK is yet to release a watch I have not loved. Martin’s eye for design, and the way he can so cleverly include so many details and references from his inspiration into Felix’s technological masterpieces, is somewhat unparalleled, in my opinion. I also have to commend Collective for being the glue that brought URWERK together with Intrepid to create this project.

As the icing on the cake, Collective is donating $50,000 from the proceeds of this project to the Intrepid Museum. This will help ensure that Enterprise’s stories of bravery and innovation will be told for generations to come. If that doesn’t warm your heart a little, then I don’t know what will. 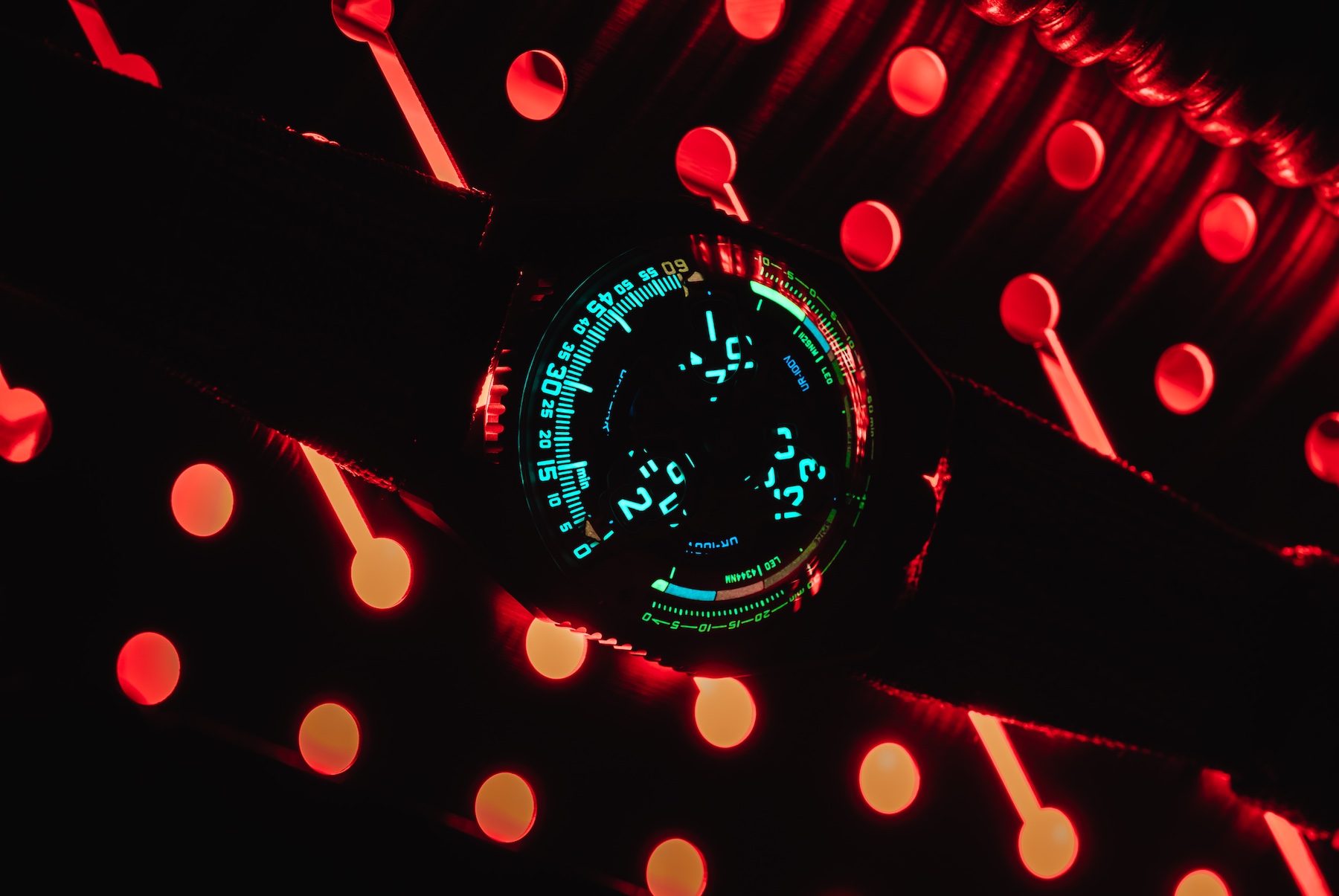 The URWERK UR-100V P.02 for Collective will be available exclusively to new and existing Collective members. The model is limited to just 20 pieces. Those interested in joining Collective and acquiring the watch can visit Collective’s website, where more information and membership applications, are available. Florida-based independent watch salon Goldsmith & Complications is the official authorized dealer for the collaboration. It will handle delivery in partnership with Collective and URWERK. Visit collectivehorology.com for further information.

Hot Topics
Introducing: The New Seamaster Professional 300M 60 Years Of Bond — With A Special Animated Case Back
105 comments
Introducing: The Oris Divers Sixty-Five Fratello Limited Edition
104 comments
Are You Still After An Omega × Swatch MoonSwatch?
104 comments
It’s Time To Invest In A Dress Watch — Our Picks From Breguet, Omega, Grand Seiko, And More
74 comments
The Rolex Waitlist Conundrum — How Much Will The Price Of Your Watch Increase While You Wait?
50 comments
Popular
A Question From A Reader: “Which Modern Speedmaster Is Closest To The Original Moonwatch?”
Robert-Jan Broer
14
Certina DS PH200M – Hands-On Review
Balazs Ferenczi
23
You Asked Us: Rolex Submariner vs Omega Seamaster
Robert-Jan Broer
24