The Omega Centenary From A Collector’s Perspective

Everyone who knows a bit about Omega watches is familiar with the Constellation collection. Today, perhaps, it is associated with the design characteristics of four “gold claws” and bi-coloured bracelets, but it was Omega’s flaghsip collection during the 1950’s and 1960’s. I’ve actually have said it before, but the Constellation is the watch that started my interest in watches a long time ago. In my family there are a couple of these vintage Constellations and I inherited one from my grandfather, who bought it in 1969 and wore it for the next 42 years: every single day.

The Omega Constellations, especially the vintage models, have become quite collectible, despite their small size. It is a perfect watch to start a (vintage) collection as you can buy them below $1000 USD in good condition. The solid gold models are a bit more sought-after and, thus, more expensive. Furthermore, the cream of the crop Constellations are those Grand Luxe models with Reinhor brick bracelet. We did an in-depth article on the vintage Omega Constellation a while ago; make sure to give it a read. 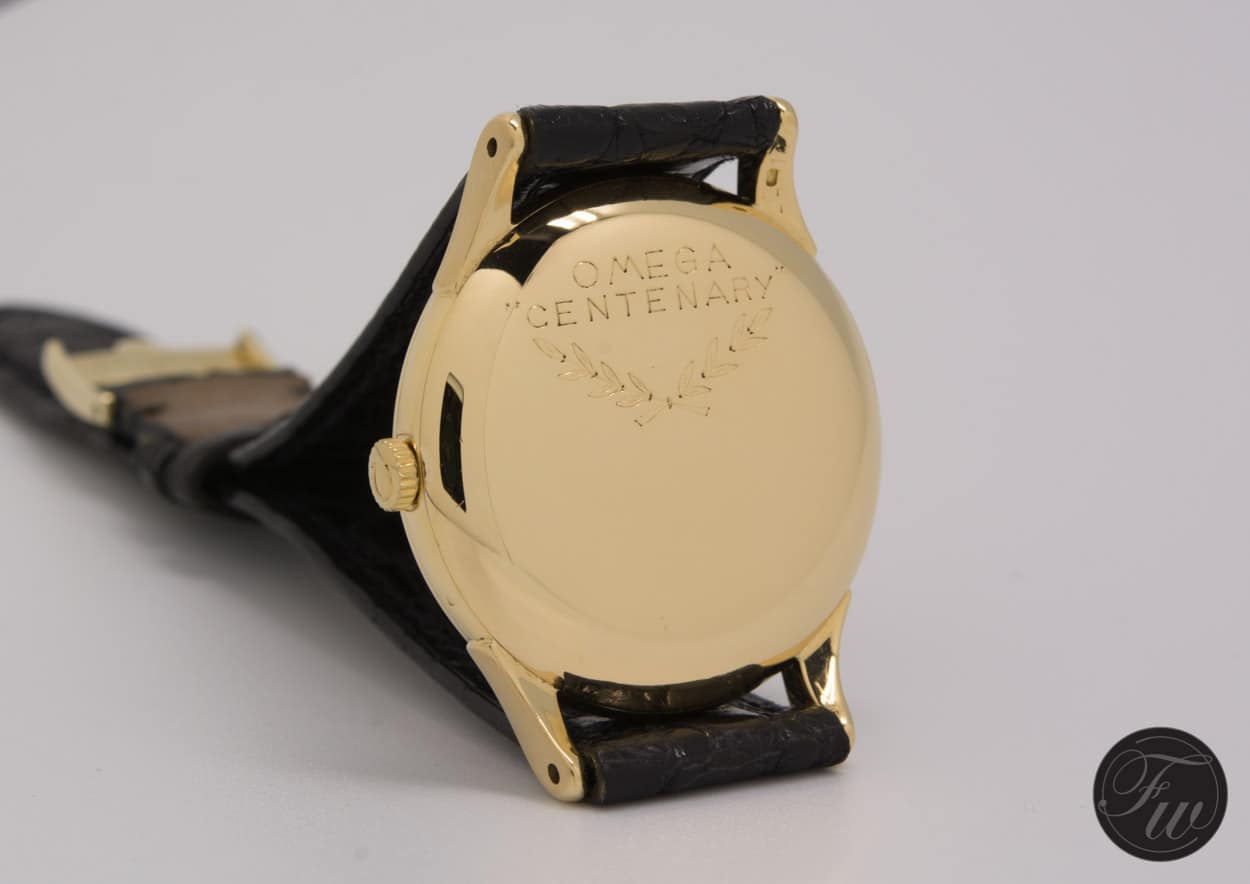 This article takes a deeper look at the predecessors of the Constellation, the less familiar Centenary models. The Centenary was introduced in 1948, to commemorate the 100th anniversary of Omega’s establishment. Notably, the Omega Centenary was the company’s first chronometer certified automatic wristwatch.

The man in charge of designing the Omega Centenary and Omega Seamaster, both in 1948, was René Bannwart. He was head of the “creation” department at Omega in Biel through 1955. After this, at age 40, he decided it was time to take the next step and started his own brand, Corum. 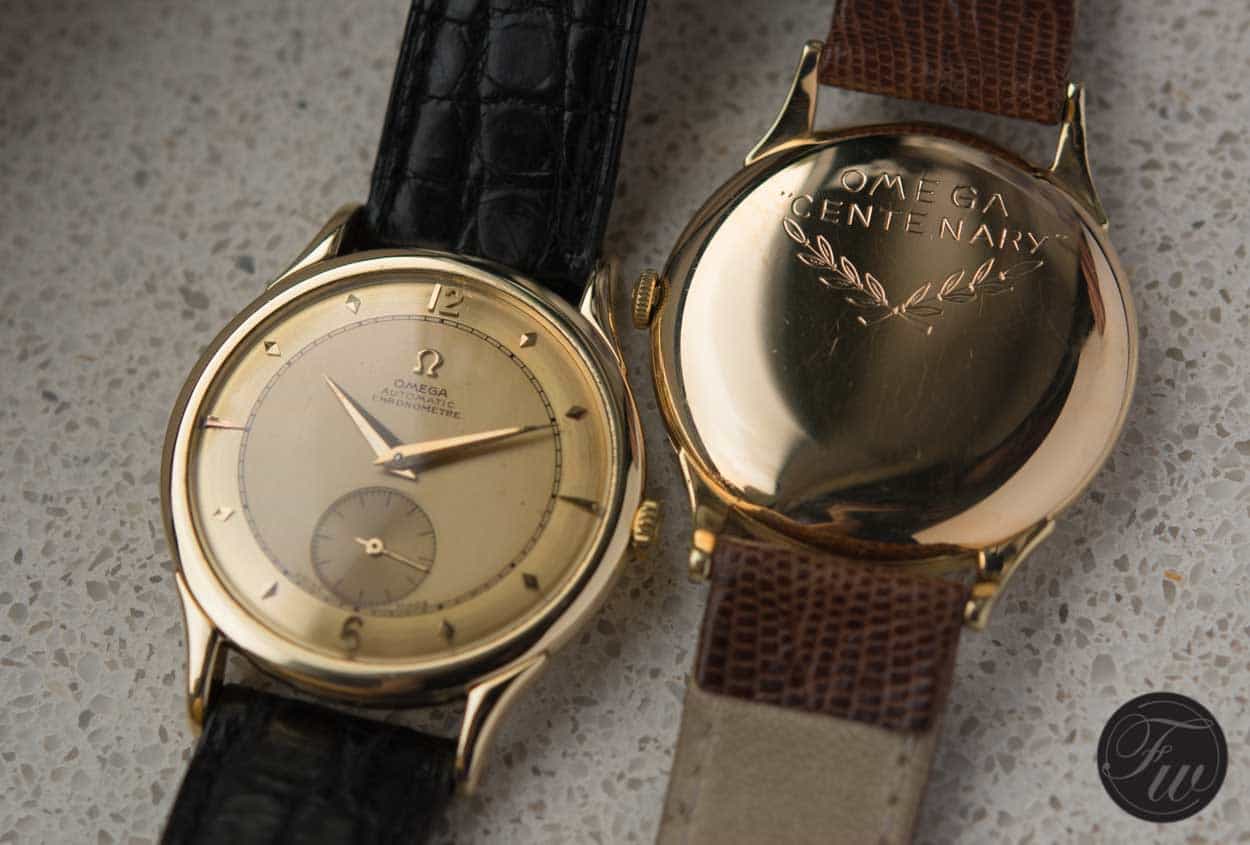 The original Centenary was produced in limited quantities (6000 in total, 2000 using the caliber 28.10mm movement and 4000 using the caliber 30.10mm). However, according to Omega, the Centenary was so successful that they started developing a successor that would be produced in large quantities and become a collection on its own. Bannwart was also in charge when designing the successive line, the Omega Constellation collection, that was introduced to the market in 1952. The Constellations were introduced as a new line-up of watches with chronometer movements to be produced in series.

While the Constellation and Seamaster collections have a huge following amongst watch collectors and enthusiasts, there exists little information on the Omega Centenary watches. A few owners shared images of their Omega Centenary on various forums (like this one), and despite getting a lot of “Oooohs” and “Aaaahs” the collecting community remains largely silent on these watches. 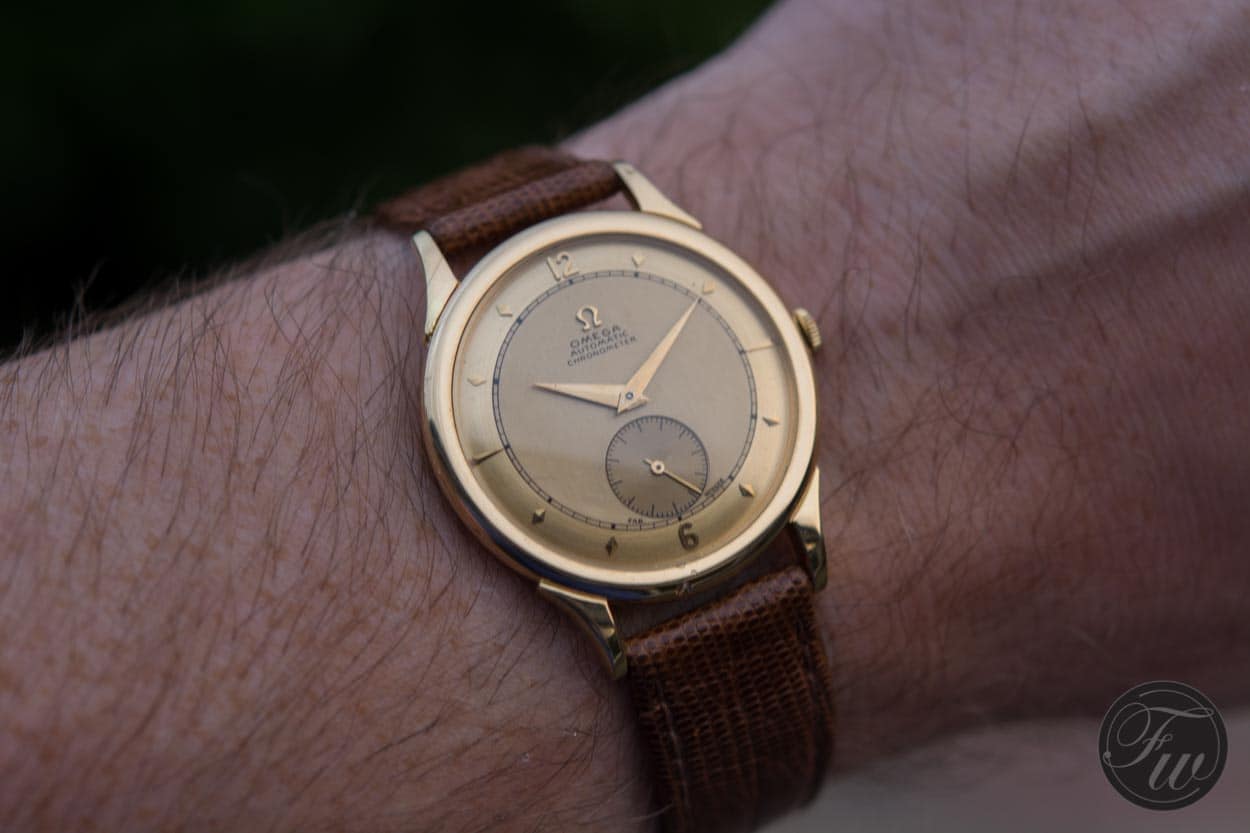 Omega decided to introduce a couple of re-editions of the Centenary as heritage pieces within the ‘Museum Collection’ of watches in 2004. A year later, they introduced a re-edition of the Omega Centenary and called it Museum Collection #5 as part of this bigger collection to celebrate the Omega Museum’s 20th anniversary. This time, though, it was fitted with a Co-Axial (caliber 2202) chronometer certified movement in a rose gold 36mm case. Only 1948 pieces were produced, but you can find them on the market quite easily. They fetch between €4500 and €5000 Euro. That’s still more than the original 1948 – 1952 Omega Centenary models cost on the pre-owned / vintage market. I found a couple originals for sale last year on Chrono24 between €2300 and €2800 Euro.

As this doesn’t differ that much from solid gold Constellations of a few years later, my guess is that the Omega Centenary watches are just unknown pieces to many people out there: and unknown is unloved.

Why should you hunt for an Omega Centenary?

First of all, the Omega Centenary is a beautifully designed watch. It has those typical Omega lyre lugs and come in solid gold only. The gold dials are in two-tone and have beautifully chosen diamond-shaped hour markers except for the Arabic ’12’ and ‘6’. A small sub-dial is located at 6 o’clock for the seconds. The gold applied Omega logo and ‘Omega Automatic Chronometre’ are proudly shown on the dial and there’s no mention of the model name ‘Centenary’. How different are these from today’s dress watches, that seem to have way too much text on the dial? Just like the later Constellation models, the Centenary also has Dauphin hour and minute hands. A small flat Omega signed crown finishes the elegant designed Centenary. 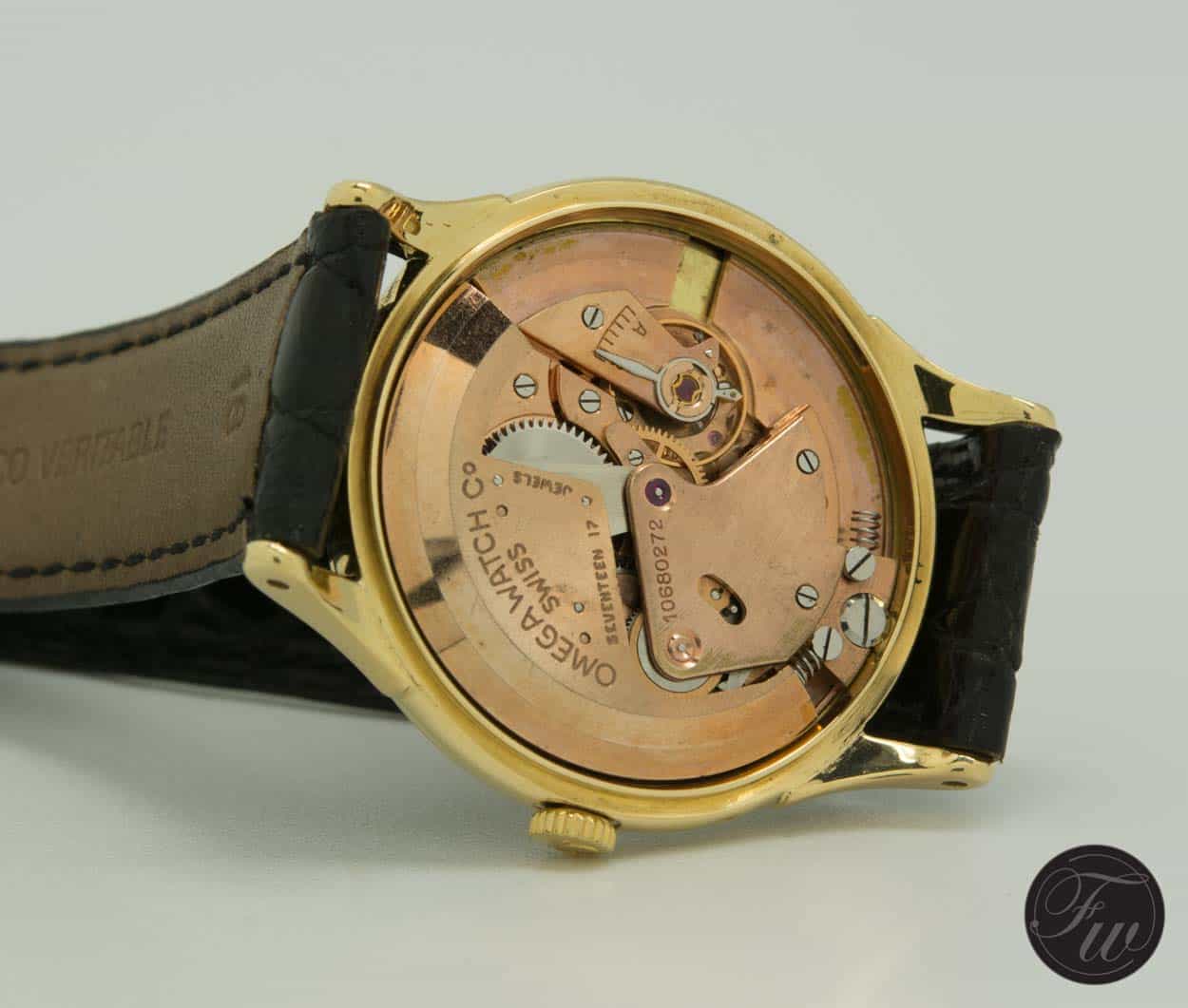 Turn the watch around, and you are looking at a solid gold caseback engraved with “Omega Centenary”. Remove the snap-on caseback and you have an amazing view of the beautiful copped coloured, in-house, developed and produced Omega chronometer movement. The bumper rotor moves short distances before it hits the spring that will bounce it back. These bumper movements were also used in those first automatic Seamaster and Constellation timepieces. The 30.10mm caliber (which was the basis for the later 331 caliber) was also used in an Omega Tresor. Yes, this is the same model name that Omega revived last year. Both caliber 28.10mm (which was the basis for the later caliber 341) and 30.10mm were used in luxury versions (‘RA JUB’) for the chronometer certified Centenary models. Only later, another batch of 5000 Centenary reference 2499 watches was produced, using caliber 343. Caliber 343 was based on the original 28.10mm caliber, but with a different finish and a new type of regulator. A very detailed description of the movements used in the Centenary models can be found here. 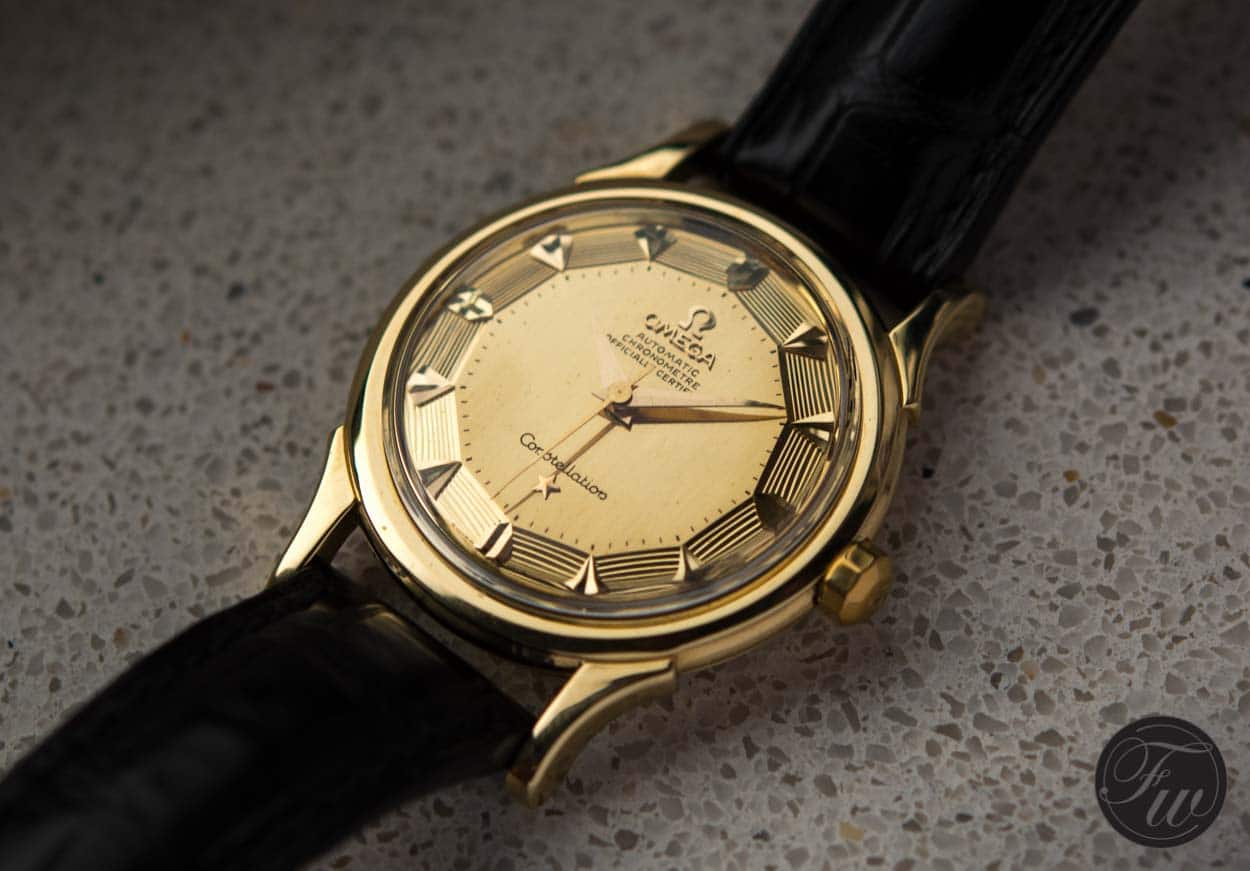 The Omega Centenary was produced in a limited quantity, far fewer than the total number of later Constellation models. True, the Constellation offers more choice and their 50x, 55x and 56x movements are considered some of the best that Omega ever made prior to the current in-house movements. However, a gold Omega Centenary is a great value proposition as it can be found for less money than similar era solid gold Constellation models. Just make sure to stay away from over-polished Centenary cases and poor redials that are often for sale. 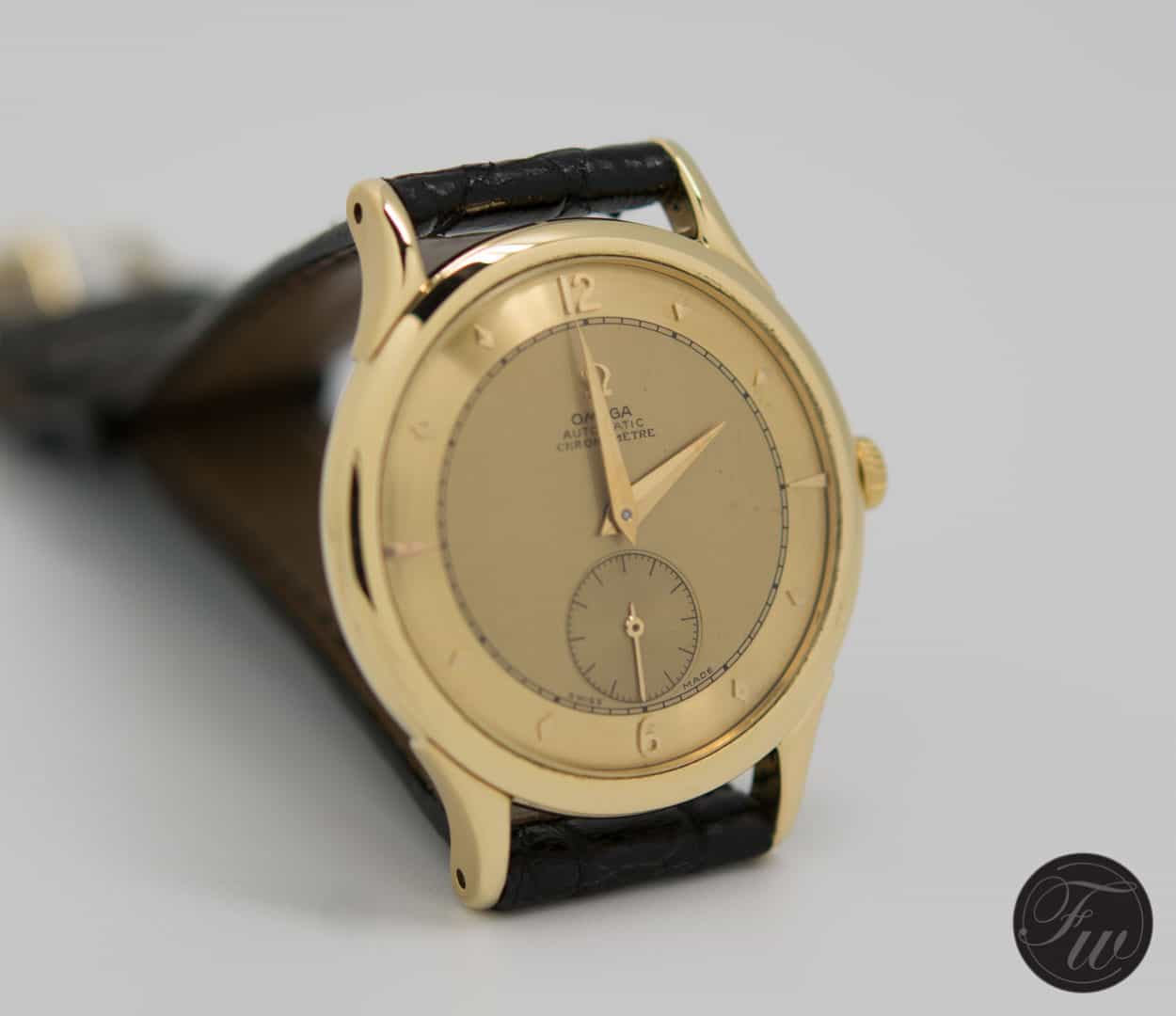 If you are able to source an Omega Centenary with the original sterling silver box and paper work, expect to pay more than the previous given estimates in this article. A couple of photos of the full set can be seen below, from Douglas Gravina on WatchUseek. 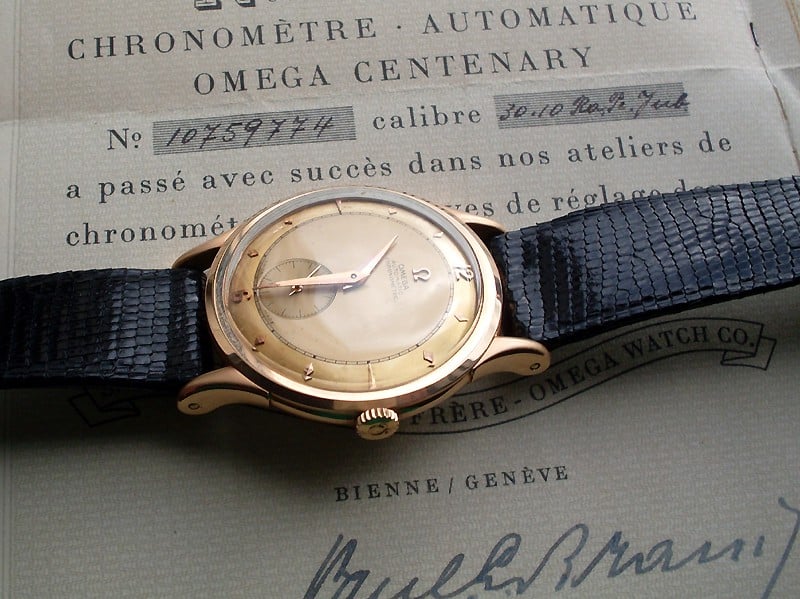 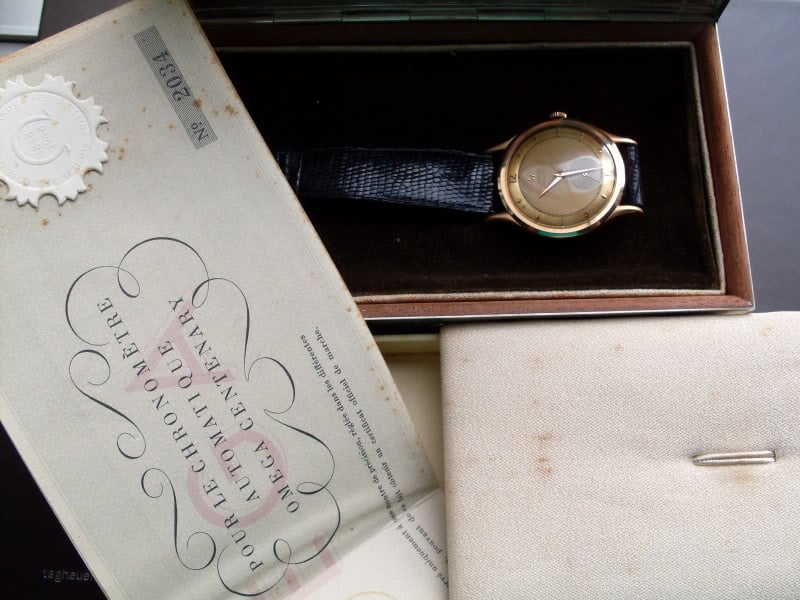 Element Of Surprise: Omega’s Constellation And Seamaster Were Designed By René Bannwart, Founder Of Corum