The history of the Pasha de Cartier is shrouded in mystery. Yes, the watch is named after the Pasha of Marrakesh, Thami El Glaoui. And it’s also true that he commissioned a waterproof watch from Louis Cartier in the early 1930s so he could wear it swimming. Another fact is that in 1933, the Pasha got his desired watch. But here is where the mystery begins. No one knows exactly what the watch looked like, though experts point in the direction of the water-resistant gold Tank Étanche. What we do know is that the watch didn’t look like the Pasha we know today. The Gérald Genta-designed Pasha de Cartier only debuted in 1985. And when it did, it fit right into the “decade of greed”. With its exuberant looks and hedonist feel, it defined the ’80s. And with a revival of the ’80s now in full swing, the Pasha De Cartier is ready for the throne again.

The Pasha de Cartier was introduced smack in the middle of the ’80s in 1985. The 1980s were years when technology advanced with lightning speed and gave us things like the Commodore 64, the Space Shuttle, Chicken McNuggets, and the artificial heart. It was the era of Thatcher, Reagan, and Gorbatsjov, and also a period in time when hair-dos were big and high, and New Wave, punk rock, and groundbreaking rap music blasted out of your speakers. While wearing leg warmers, fingerless gloves, bright neon shades, and mesh tops, of course.

The 1980s were a time when hedonism was in full swing. And the Pasha de Cartier embodies the frenetic Zeitgeist. The man who sculpted the Pasha was none other than the designer of the Royal Oak and Nautilus, Gérald Genta. The designer was briefed to create a sports watch, and he did. And then he did just a little bit more. 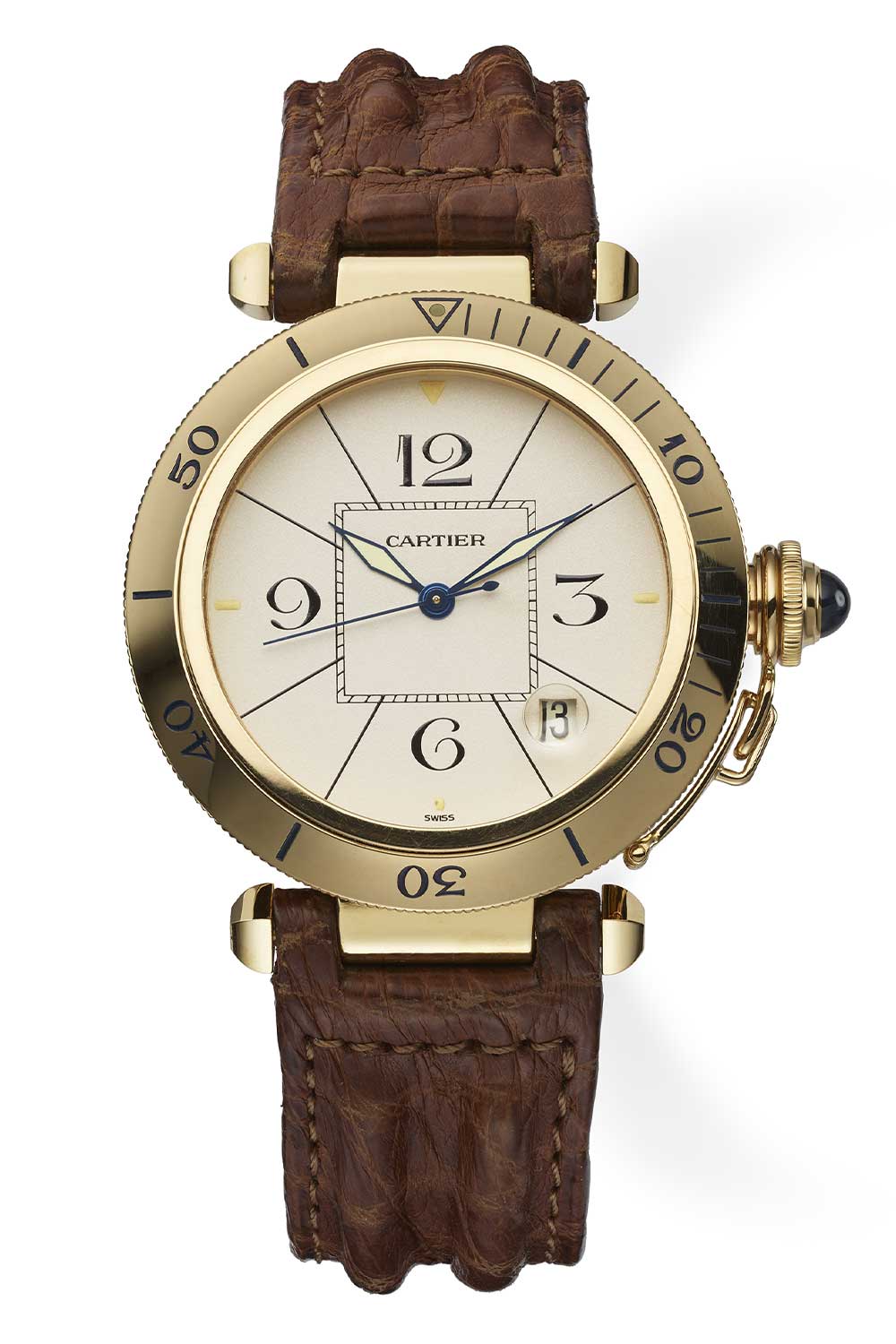 The original Pasha de Cartier from 1985 in yellow gold

The Pasha De Cartier reclaims its throne, and it doesn’t play by the rules to do so

What the Pasha de Cartier does is bring together a period in time that is still fresh in people’s memories with a designer that is now regarded as the GOAT. Genta-designed watches are in hot demand, and so are Cartier watches in general. Why? I think mainly because Cartier is a world-famous symbol of luxury and status. Wear a Cartier watch — be it a Tank Américaine, Santos, or any other model — in real life and on Instagram, and everybody will notice it. And not only notice it, but will also perceive it as a luxurious, classy, and tasteful object, a must-have for almost every generation. A white dial with Roman numerals is archetypal Cartier, and it’s a unique look that won’t go unnoticed. But the Pasha doesn’t play by the Cartier rule book. 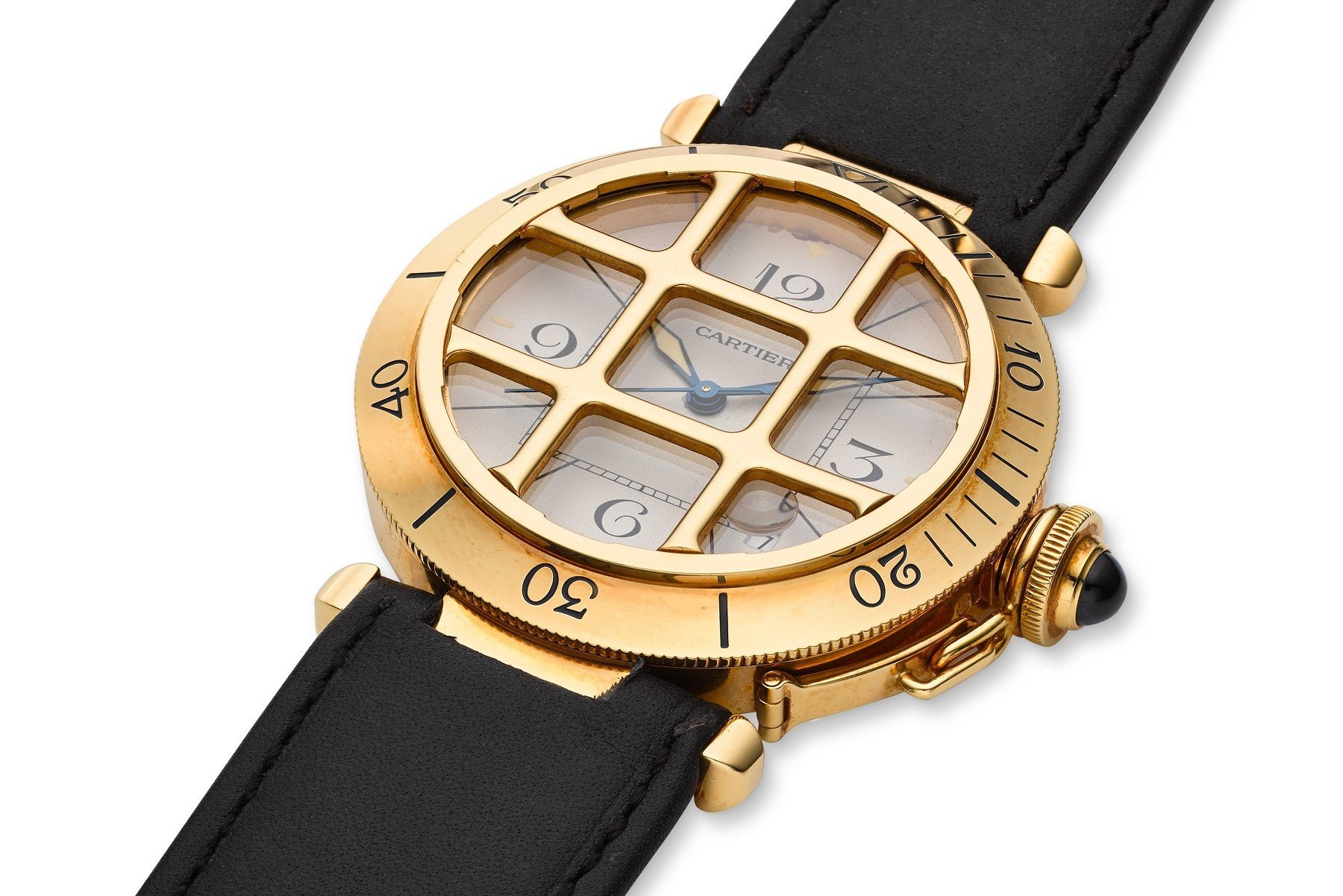 The round Pasha stands out like a sore thumb in Cartier’s rectangular watch collection. Genta created a 38mm round watch with a square on the dial that forgoes the characteristic Roman numerals for Arabic ones. The broad diving bezel refers to the Pasha in the pool, and the decorative crown construction is also functional as it keeps water out of the case. It may be a paradox, but because it was so different, the Pasha de Cartier was overlooked for a while by aficionados and collectors. 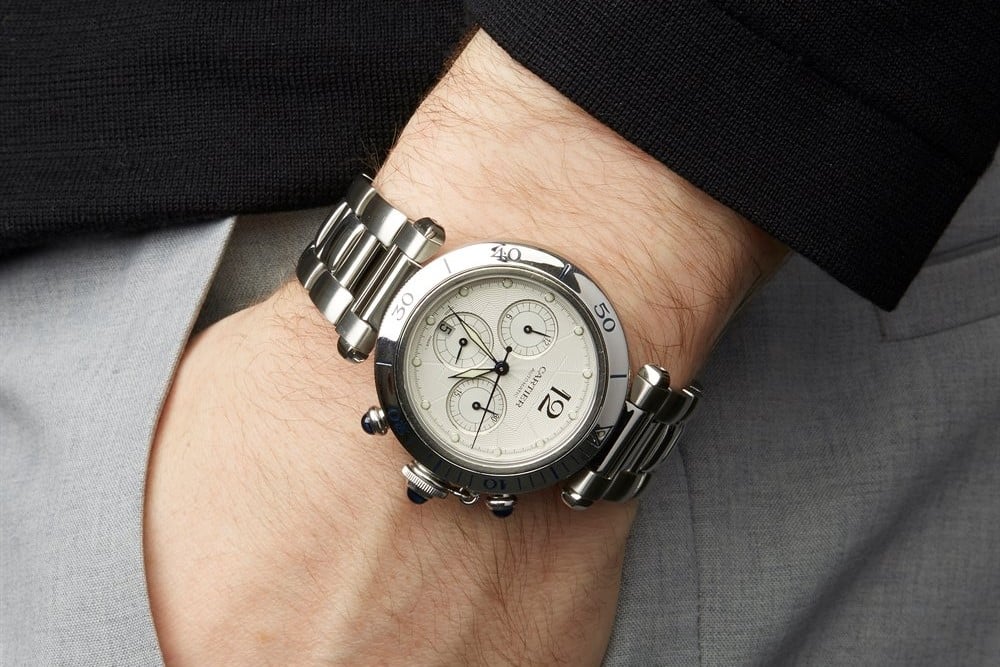 Also, the fact that the Pasha isn’t a constant presence in the Cartier collection doesn’t help. In 2012, the Pasha disappeared from the collection, only to make a come-back in 2020. An absence of eight years will have a watch disappear from the spotlight. And it was in the spotlight that the Pasha excelled. The watch was an instant hit with the rich and famous, and stars like Sammy Davis Jr. and fashion designer Valentino famously wore a Pasha. The watch is ’80s glam in its finest form. 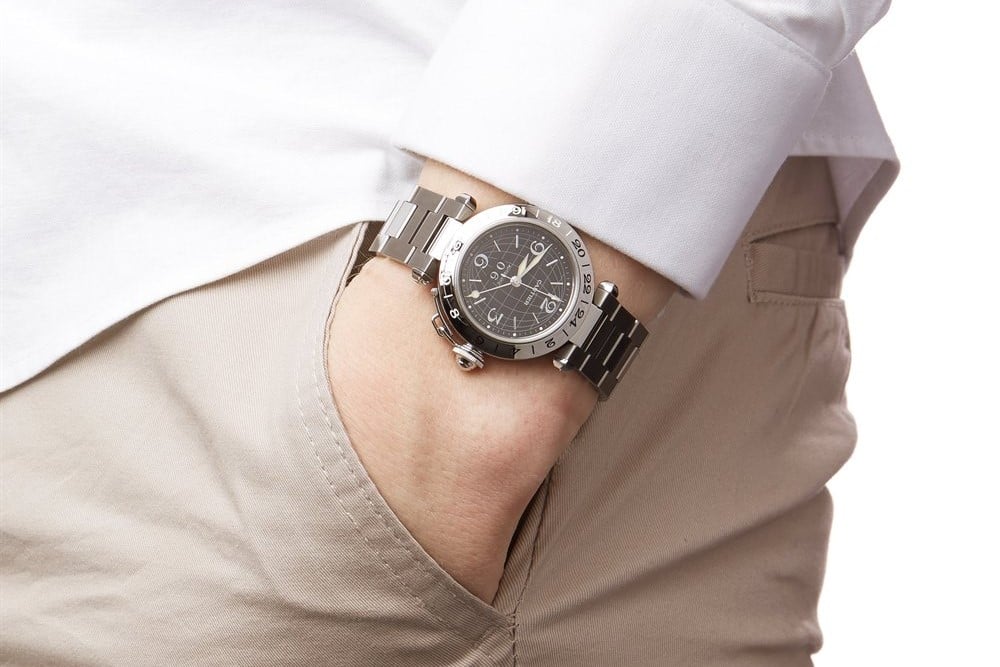 Searching for the right Pasha

After typing in “Cartier Pasha”, I get 1,386 search results on Chrono24. Interestingly, there are a lot of Pashas for sale in Japan, and prices for steel models start around €1,750. The 35mm Meridian GMT Small Date Automatic (Ref. W31029M7) for €1,886 is a sporty and stylish timepiece that loves to travel. The yellow gold 38mm Power Reserve GMT (Ref. W3014456) is a €21,224 watch that also loves to travel, but only flies first class and stays in five-star hotels. And there are tons of more variations out there. There’s the chronograph that looks logical, the golf watch that looks way more unusual — there’s a NOS yellow gold Pasha Golf Automatic on sale on Chrono24 for €41,900 — and the perpetual calendar (Ref. W3000351) that looks complicated with stylish ease — there’s one on Chrono24 with a leather strap for just under €26K.

The Pasha to rule all Pashas

The most glamorous of all Pashas, in my opinion, is a yellow gold Pasha (Ref. 1021) with a grill — you can remove the grill by rotating it counterclockwise — and a so-called “Figaro” five-link bracelet. The bracelet is suave and shiny, and it integrates incredibly well with the unorthodox Art-Deco-style “Vendôme” lugs of the Pasha. But it was only in production for five years, and as a result, a Pasha with this bracelet is sought-after and pricey. 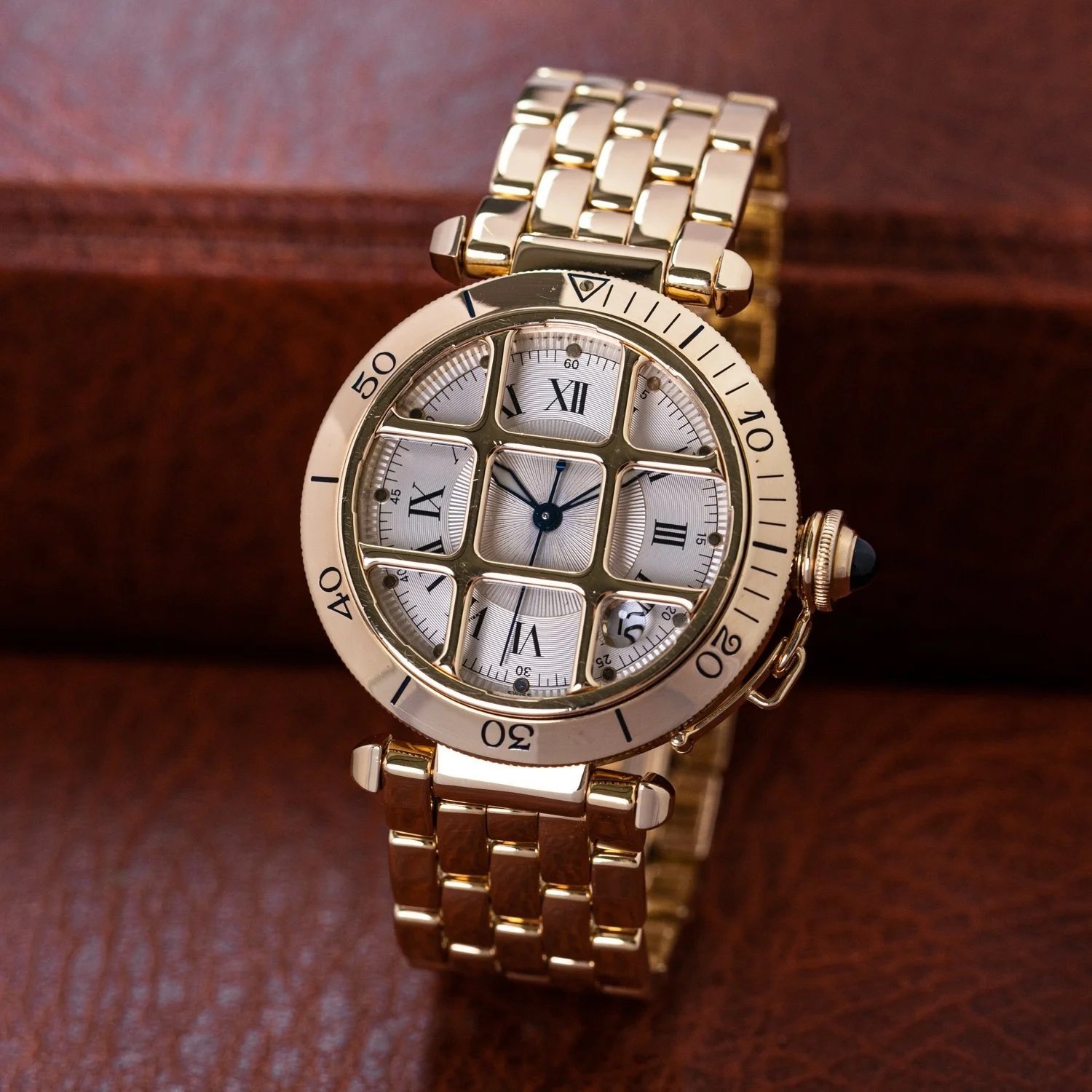 Modern rulers of the Pasha dynasty

In 2020, Cartier brought the Pasha back in 35mm and 41mm sizes and in stainless steel and three different gold colors. The “square in a circle” on the dial has remained and so have the positioning of the Arabic numerals, the characteristic blued sword hands, and the blue sapphire cabochon on the crown protector. Of course, I would add; you don’t mess with a Genta original. New is the QuickSwitch system that makes changing the strap very easy. And speaking of easy, the SmartLink quick bracelet-sizing system can be used by even the clumsiest of buyers. Even those who order online won’t have to undergo the walk of shame to the closest Cartier AD to have the bracelet shortened. In terms of practicality, the new Pasha models are well up-to-date. 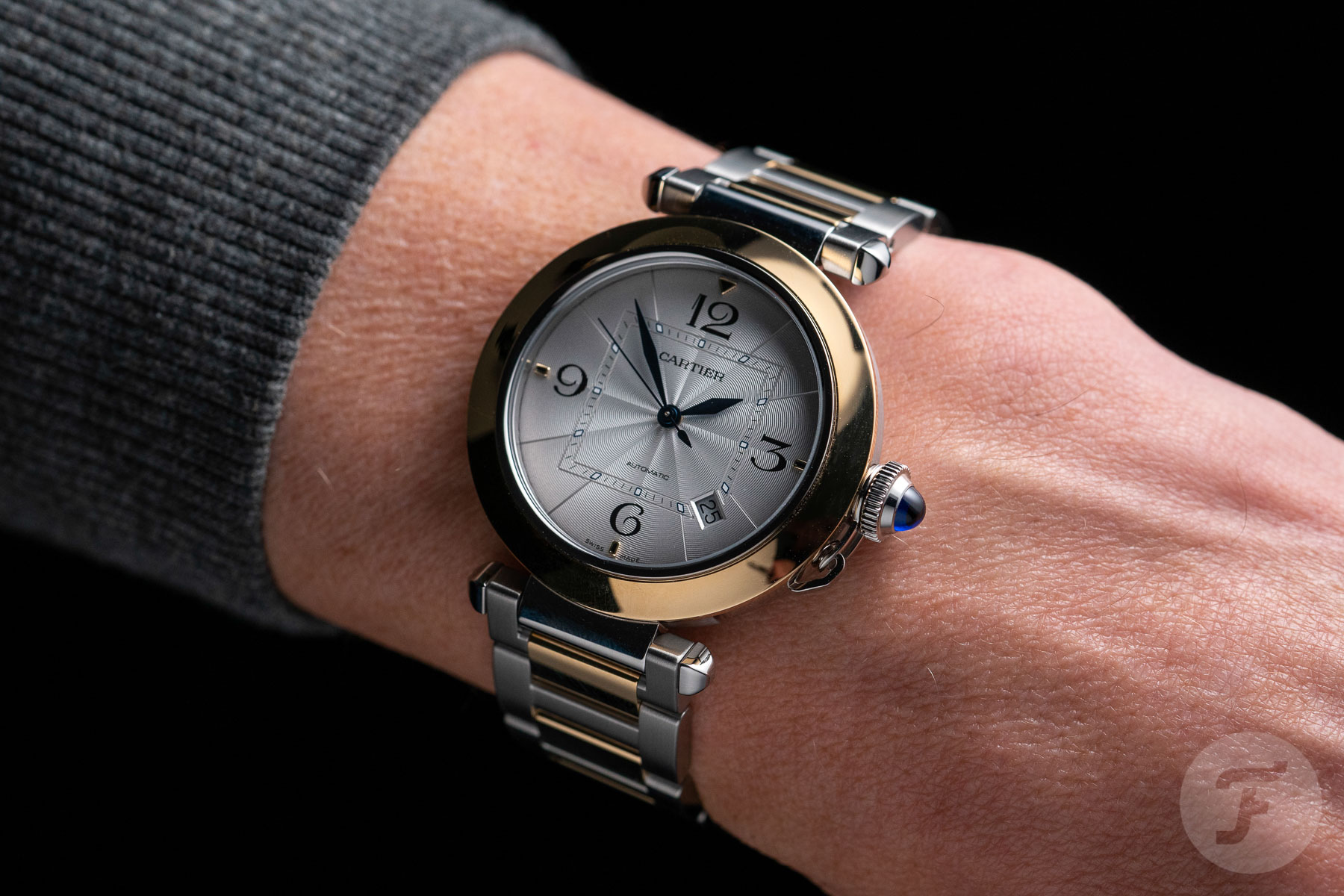 Wearing the 2021 41mm Pasha de Cartier in steel and gold

Pasha de Cartier: born and reborn in a material world

Not too long ago, I had the chance to wear the steel-and-gold 41mm version of the Pasha de Cartier, and I had a blast with it. A blast from the past, even. The watch, with its unique look, has an aura of carefree optimism that’s impossible to not see and feel. The sumptuous Pasha, be it an older or a revamped model that is in the current collection, fits perfectly in the 2020s because of its bold exuberance.

This watch was born in a material world and is reborn in a material world. We live in a world where status has to be identified at first sight. The Pasha de Cartier that provokes visions of abundance, wealth, luxury, coolness, and carefree living is the perfect instrument to achieve that. The Pasha de Cartier had and still has the panache, élan, and style to match and define an era. 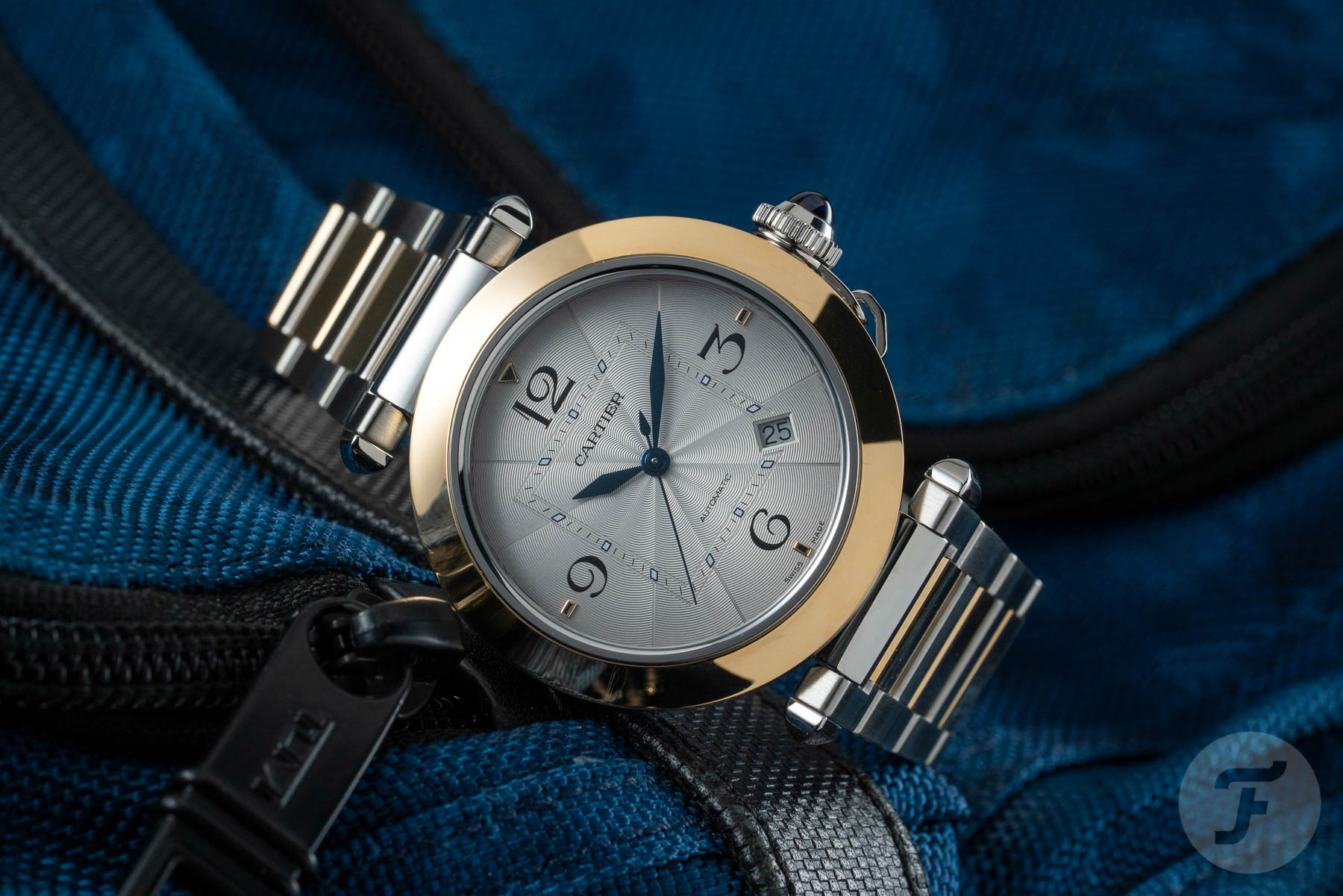 Reminiscing about the Pasha on screen… or rather, its absence

When I think of the 80s — the era of MTV, CNN, the Commodore 64, and President Reagan — I think of Miami Vice, a show that, in all its pastel and materialistic glory, made me want to trade Holland for Florida badly. And then I think of the white Ferrari Testarossa and the T-shirts with buttons. Anyway, Miami Vice was a great show and the talk of the town (I mean high school) the day after the last episode aired. As I said, it was a great show, but it could have been greater if only Don Johnson’s character Sonny Crockett had not worn an Ebel 1911 Sport Classic Chronograph, but a gold Pasha de Cartier instead. And what about Wall Street from 1987? The cut-throat mentality of the money-obsessed “decade of greed” was almost perfectly personified by Michael Douglas’s character Gordon Gekko. I say almost perfectly because, in the movie, Gekko should and could have worn a Pasha to reach perfection. But he didn’t. Instead, he wore a 29mm Cartier Santos Galbée. It didn’t cost him the Oscar for best actor in 1988, but still.

The future of the Pasha is in your hands

I already said it before — the Pasha has got what it takes. When you put aside that the bold Pasha was born in a decade when money ruled furiously, the watch, regardless of its connotations, looks unique. This goes for older and newer models alike. The Pasha de Cartier on the wrist is an expression of a life lived to the fullest. And if you’re not sensitive to that, please look at the crown of the Pasha. I think the capped-crown-and-chain device is amongst the most iconic style details in the world of watches. Just unscrew the crown with its signature blue synthetic spinel cabochon, let it dangle on its one-link chain, and you will agree that is a special, albeit tiny, watch spectacle. And in case this also doesn’t do it for you, just be aware of the fact that the Pasha de Cartier is a Genta design you can actually buy/afford. 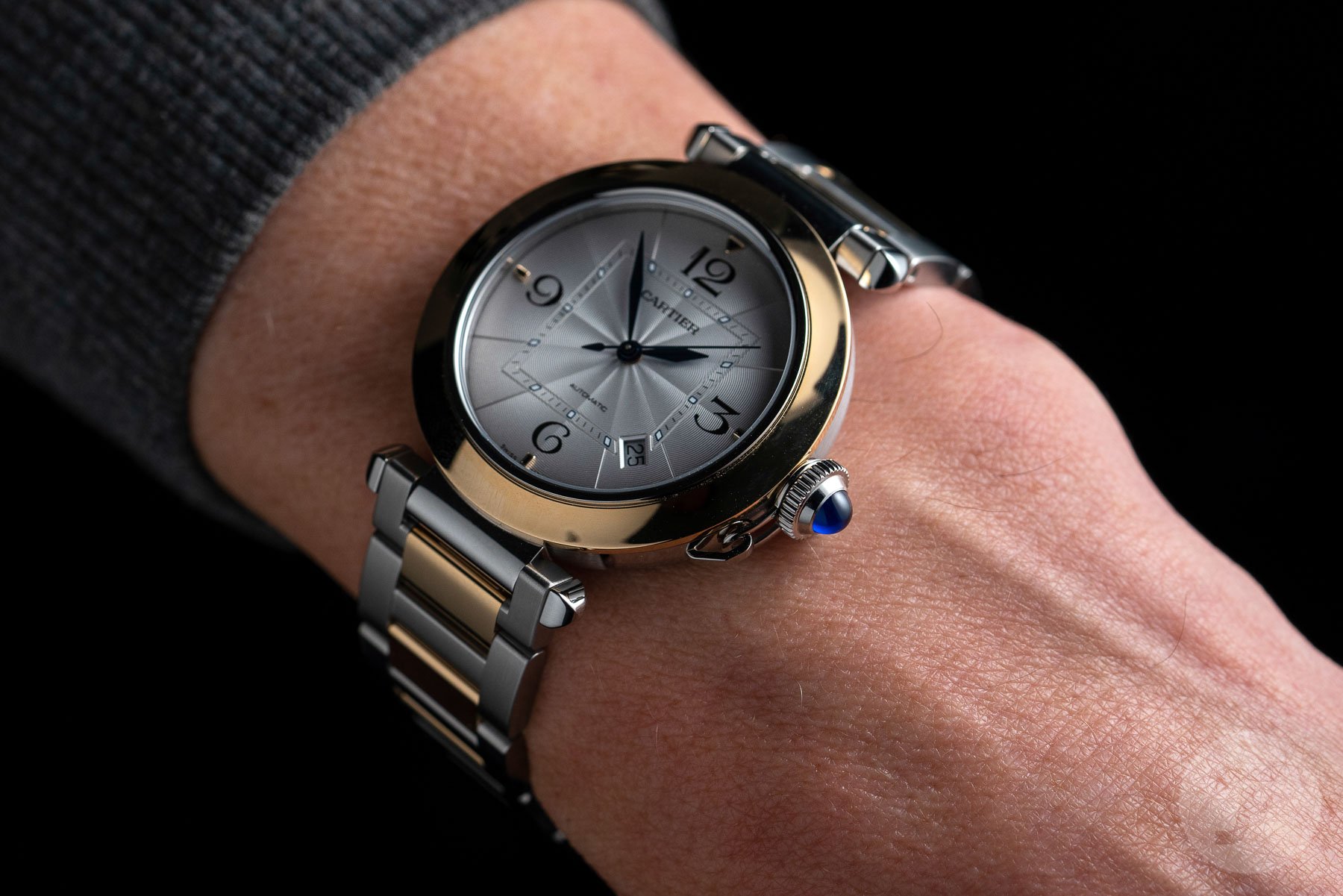 The Pasha de Cartier is ready to ascend its throne and shine as the materialization of yet another era. Find more information on the different Pasha de Cartier models on the official website.