The Seiko Boutique Opens in Frankfurt

There’s no doubt that Frankfurt is becoming a watch shopper’s paradise. Aside from several prominent multi-brand retailers, the city now features boutiques from Omega, Jaeger Le-Coultre, Patek Philippe (as part of Bucherer), Hublot, TAG Heuer, Sinn and, the latest, Seiko. The Japanese mega brand is the focus of our story today as a new boutique has recently opened in mainland Europe’s financial center. 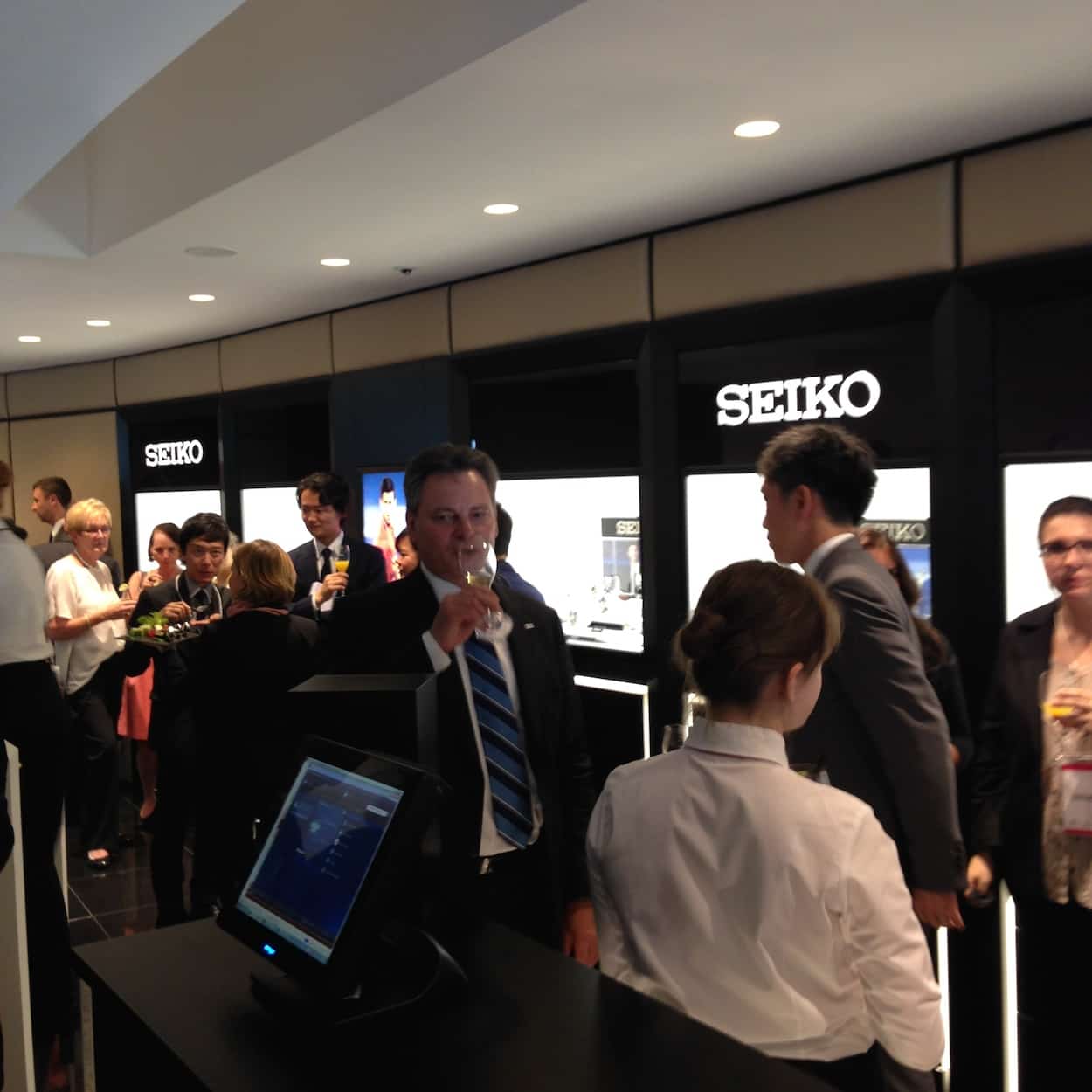 Europe has been undergoing some serious heat, and Friday, June 17th was no exception. I met up with Robert-Jan in the early evening in front of the new Seiko boutique and the temperatures were still in the mid 90’s (mid 30’s for the Celsius-inclined). We gave a nod to the doorman at Seiko and a portal of climate-controlled heaven was offered. Time to step inside… 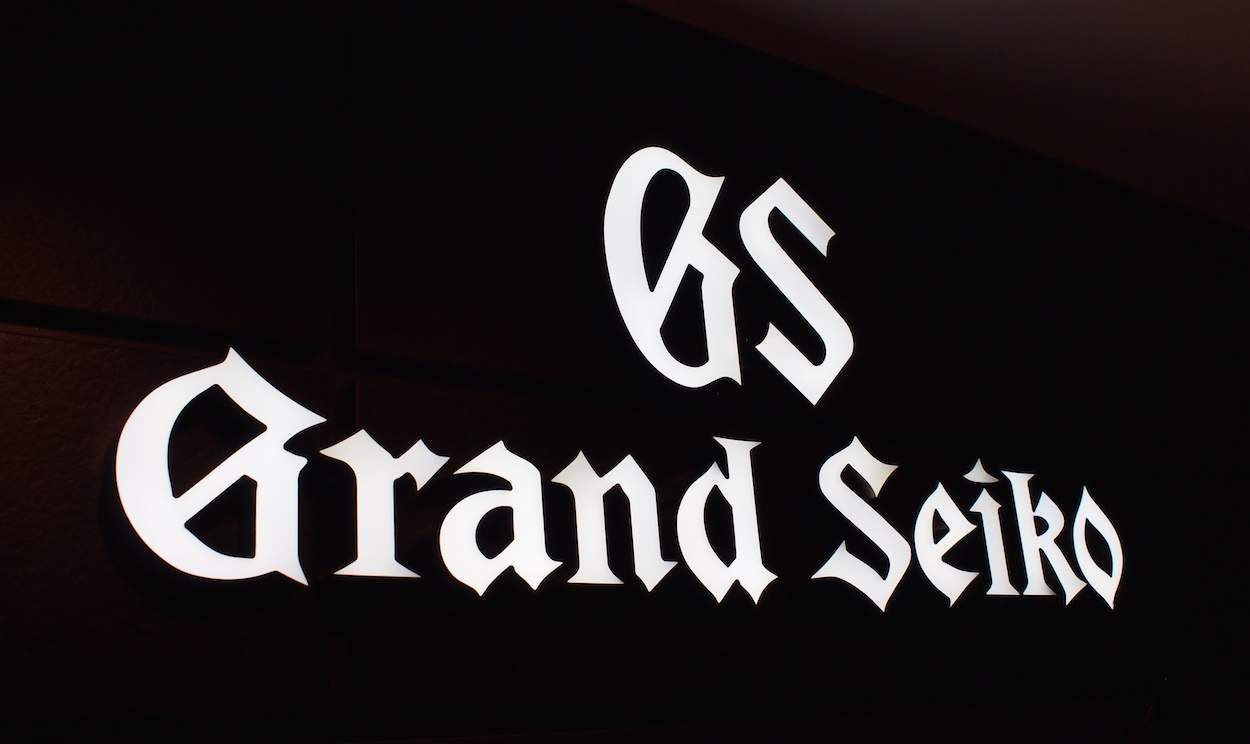 Before getting to the actual store, though, let’s talk a little about the inspiration behind the opening of the Seiko boutique in Frankfurt, the location and why these boutiques are so important for the brand. If we think about the middle to high end of the European watch market, it is absolutely dominated by the Swiss brands. They’re thought of as being the best bar none and they bolster this reputation by seizing the most desirable product placement within notable retail shops. Therefore, potential customers often don’t see Seiko or only know the brand via lower cost models in large department stores or fashion jewelry shops.   Seiko is highly cognizant of this and wants to ensure that the public realizes that they offer serious timepieces that easily compete with the best from Europe. This is where the boutique experience comes in and it allows Seiko to deliver an unfettered message about its key products: Grand Seiko, Astron, and Prospex. 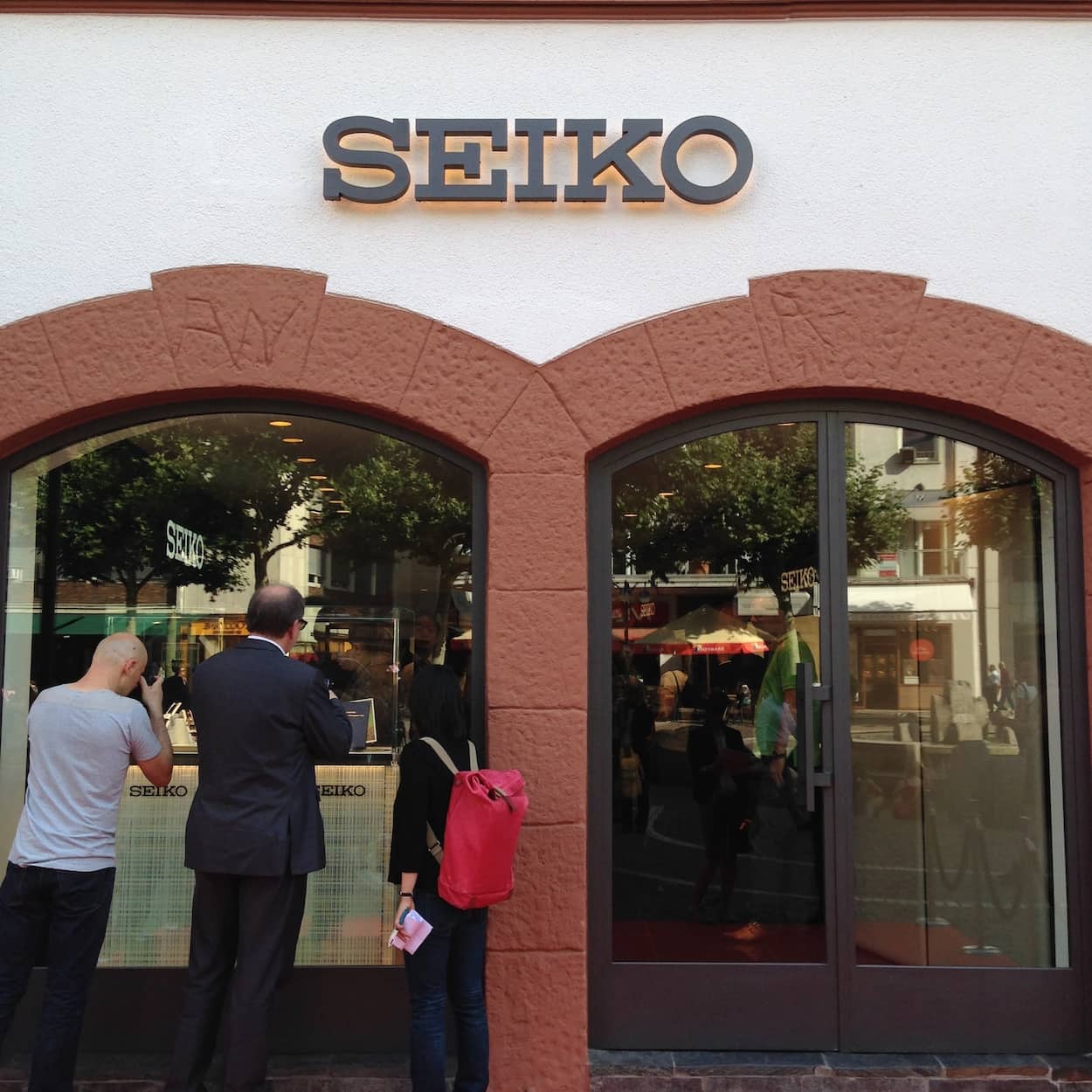 Regarding location, Seiko chose a spot in the most prestigious area of Frankfurt, known as the Fressgass. The Fressgass is in the heart of the city, is within walking distance of all the major banks, and sits amongst other high-end retailers. For reference, the Apple Store is directly across from Seiko. The street behind the boutique, Goethestrasse, contains many of the watch boutiques I already mentioned in addition to all the haute couture fashion brands such as Prada, Chanel and Gucci. This is key in a city such as Frankfurt where local bankers do a lot of window shopping and walking over lunch. More importantly, though, the city brings in massive loads of tourists who often stay – and shop – for 1-2 days in the city after a long journey before beginning their “15 countries in 10 days” European bus tours.

Coming back to the importance of the boutiques, I mentioned how key it is for Seiko to gain a potential customer’s eye without the distraction of other brands. This isn’t an uncommon mission as the Swiss are doing the same with their boutiques. Seiko, however, knows it needs to continue to strengthen its image in Europe and is really working hard to establish itself as a premium watchmaker to the uninformed.  A boutique is a great way to do this as brand experts will be there to help educate potential customers.  By the way, if you happen to be from Japan and are reading this, this unfair bias by European watch buyers must seem crazy as Seiko has been a formidable maker for decades and has long been featured alongside the most expensive Swiss timepieces. Coming back to another significant reason for having a boutique: by entering the boutique and being shown the watches in an extremely tasteful setting and, likewise, in an exclusive district of the city, it does immediately begin to open one’s mind to the possibilities of the brand. 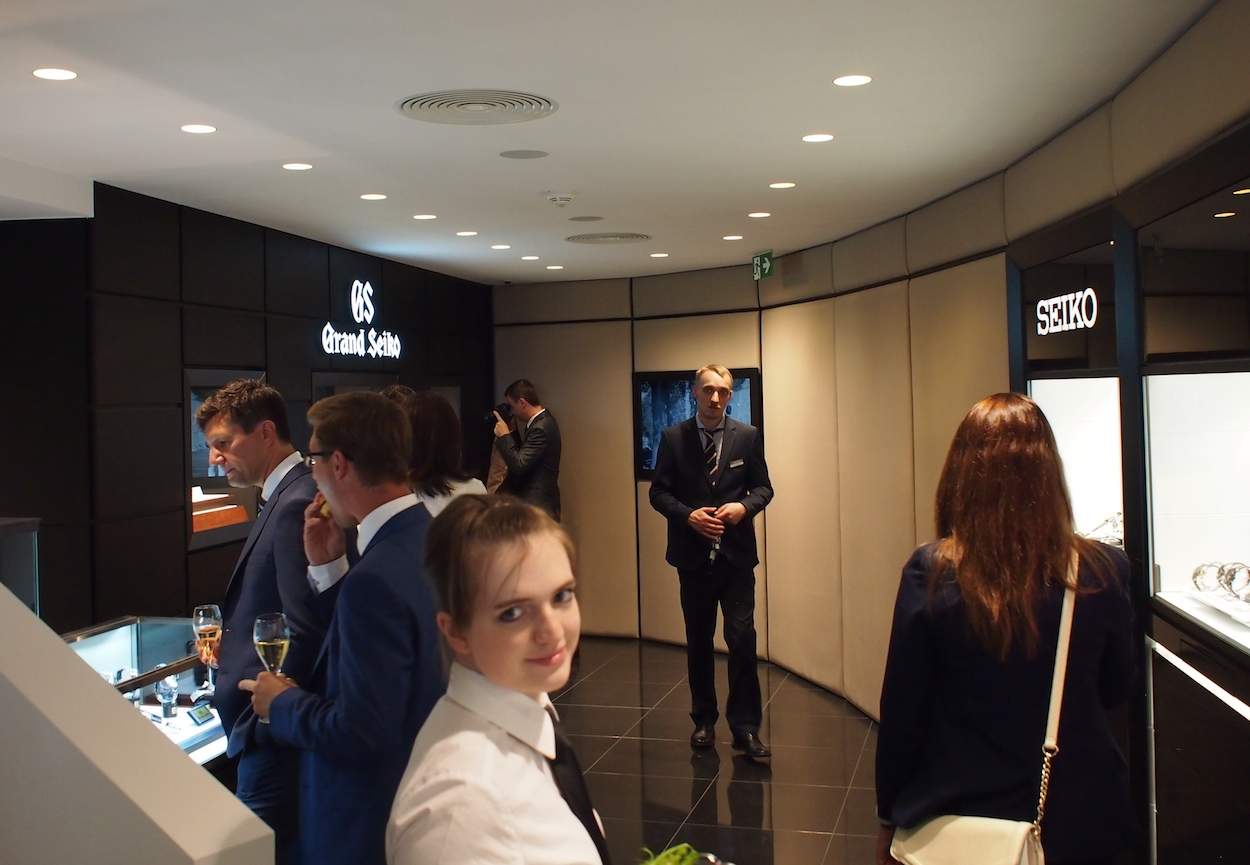 Now, we return to the air conditioning and find ourselves in a modern, clean, yet understated – in that modern, clean, yet understated Japanese way – boutique. It’s long with flush cases set within the walls and features a desk and winding staircase. Aside from the standalone vertical showcases in the front window and a separate display case of Grand Seiko’s that’s obscured by the staircase, the store absolutely lacks clutter. I’ll have to return on a normal sales day, but on opening evening, there were no racks of brochures, desk mirrors or anything sitting out that would connect the brand to anything remotely like the department store experience. 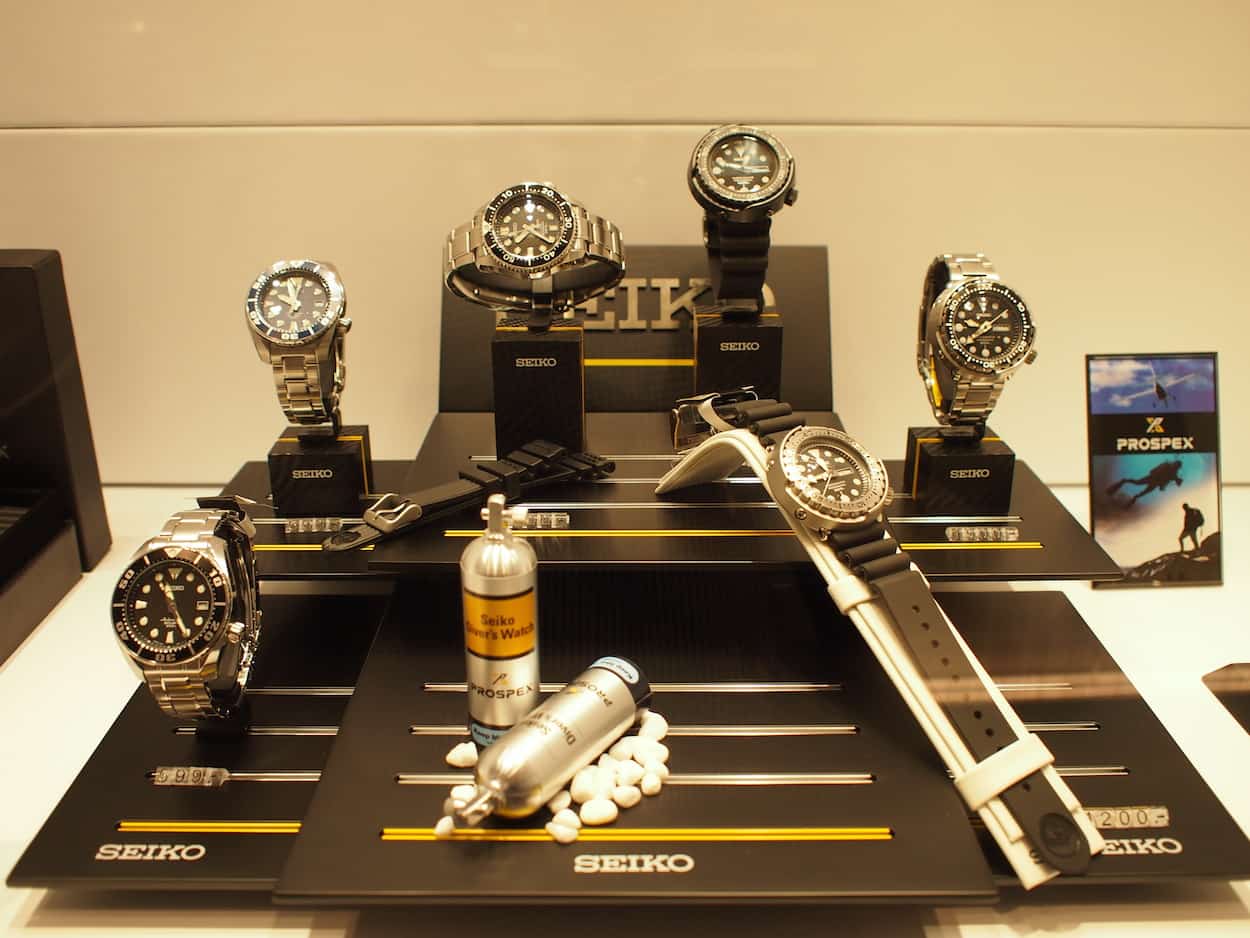 I mentioned that Seiko is really focusing on Grand Seiko, Astron, and Prospex. These are the lines that are featured within the Frankfurt boutique, but there are a few exceptions. In the front window showcase, a couple beautiful Credors were on display. Also, I noticed some Sportura and Velatura models. 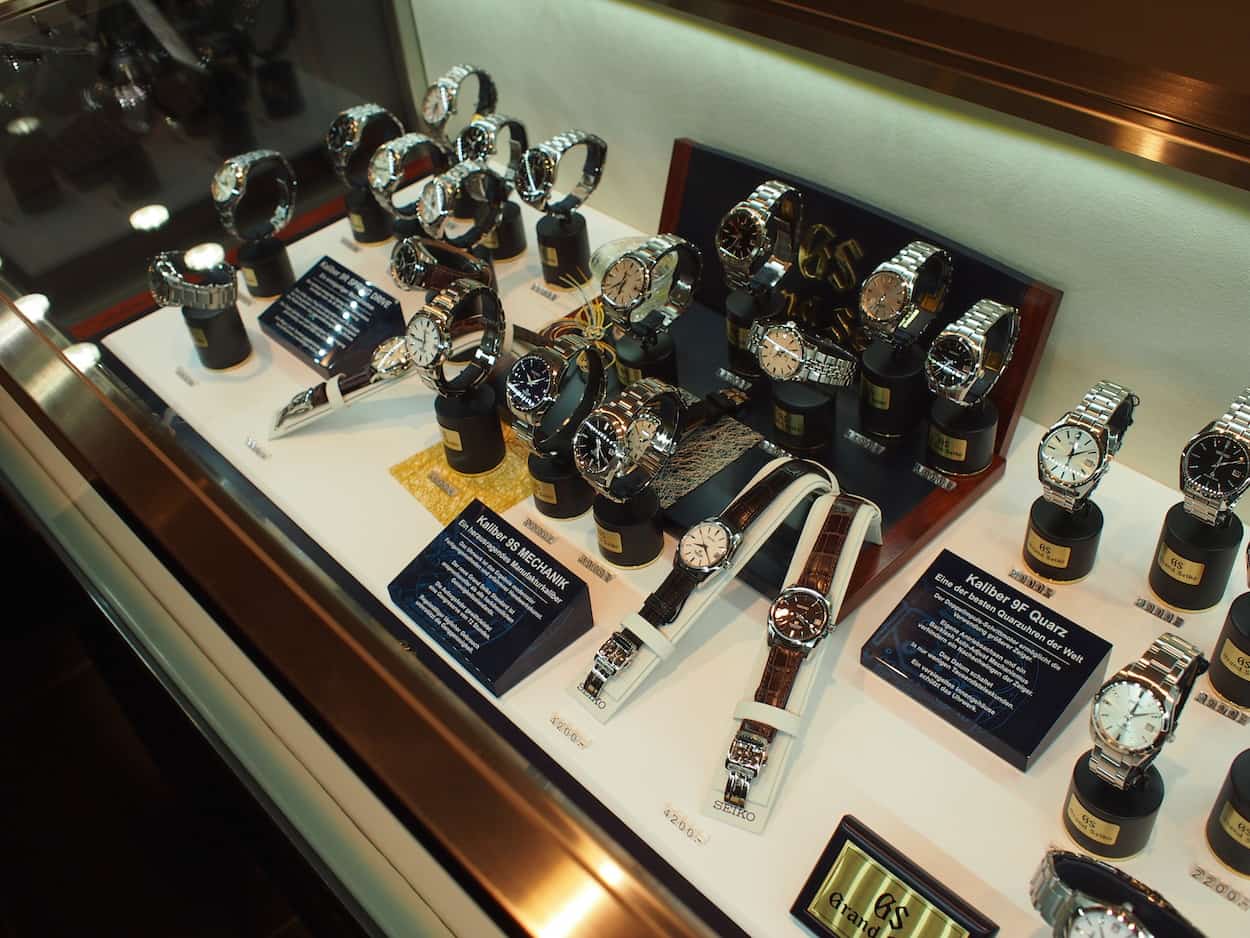 Still, though, the entire left side of the store, before and after the staircase, focuses on Grand Seiko. 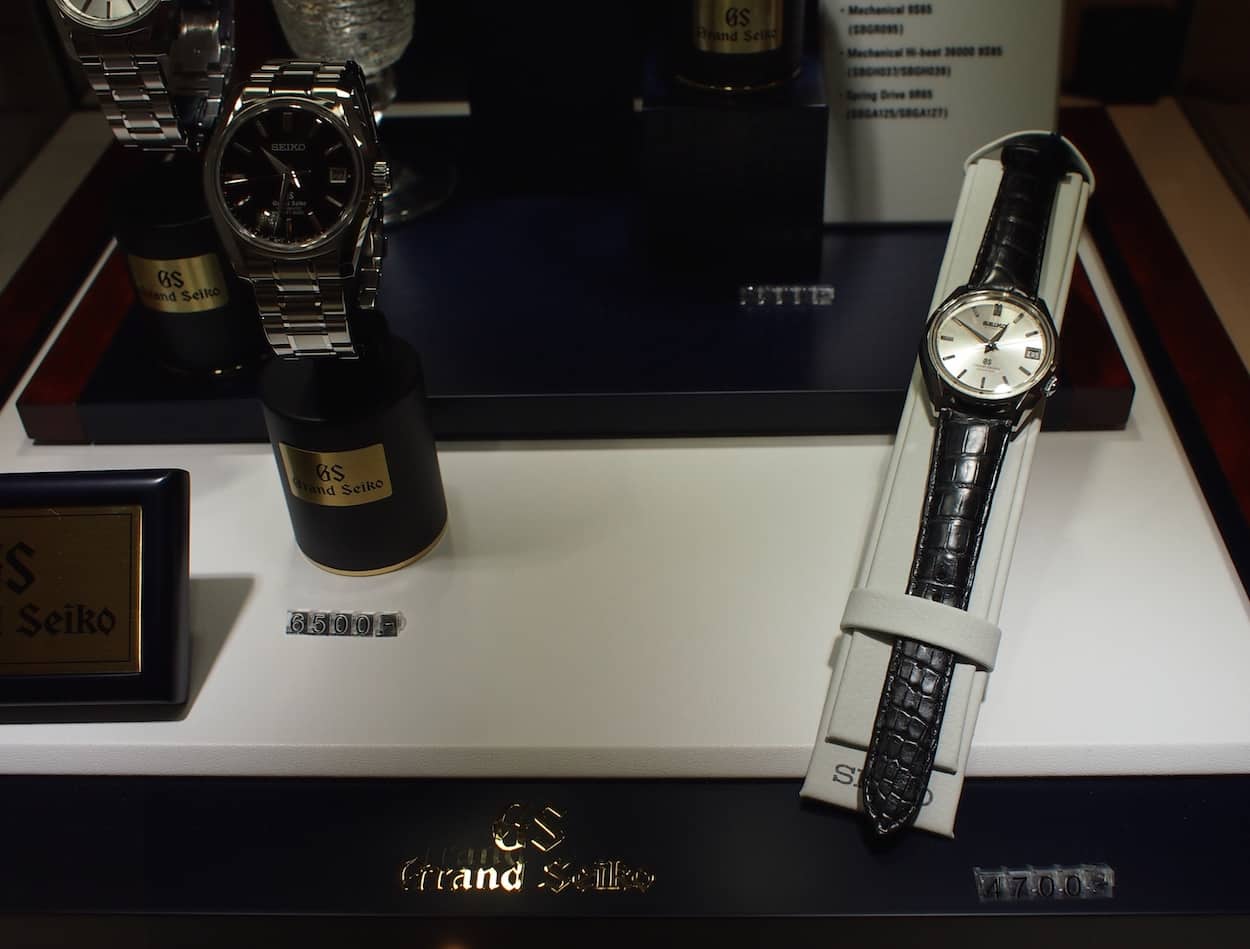 In fact, the newest limited edition model, the 62GS is shown in its current form as well as the original piece from 1967. The other, regular edition, models drawing inspiration from its case design are featured throughout various Grand Seiko displays. 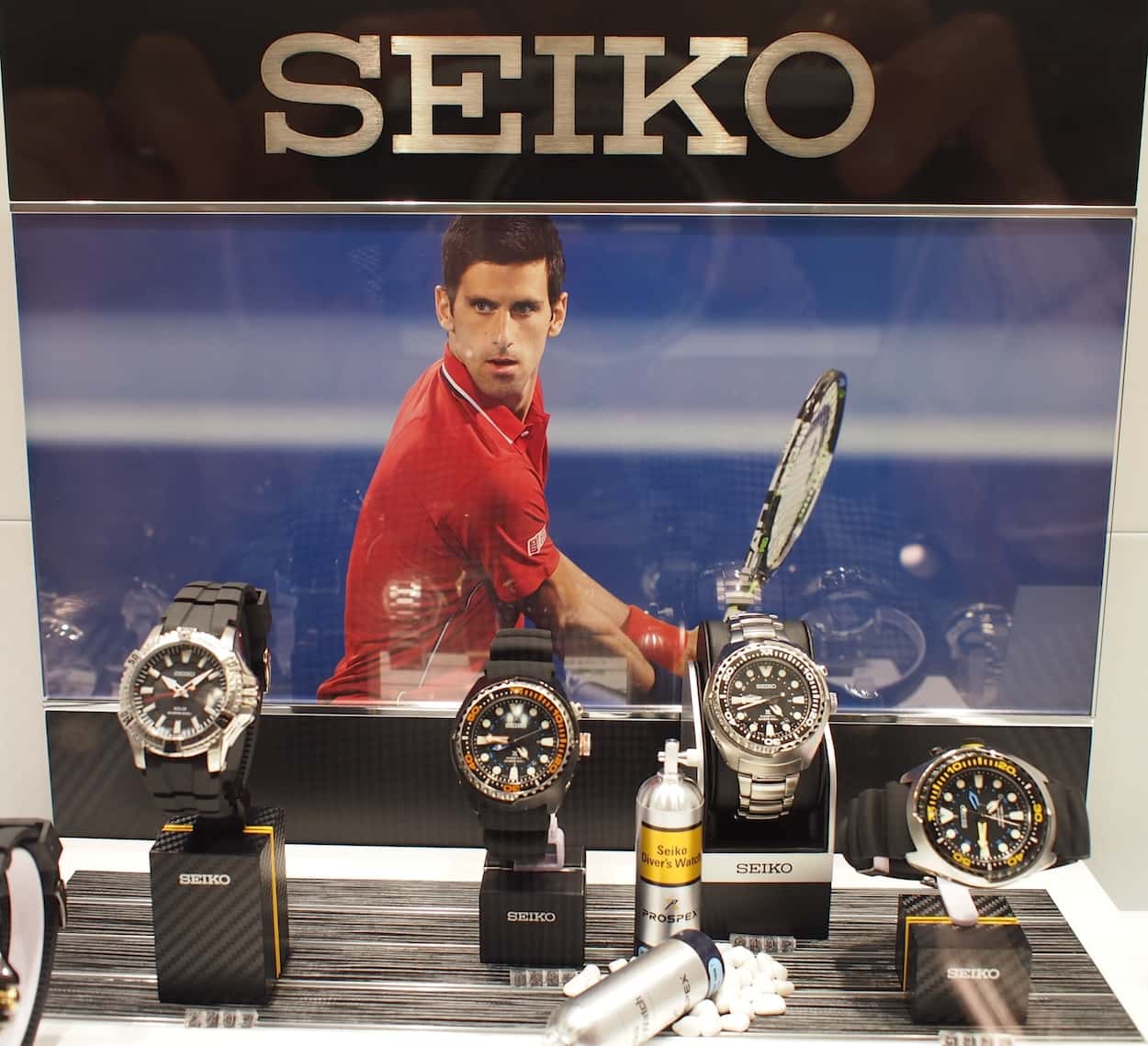 The right side of the store features models primarily from the Prospex and Astron collection. 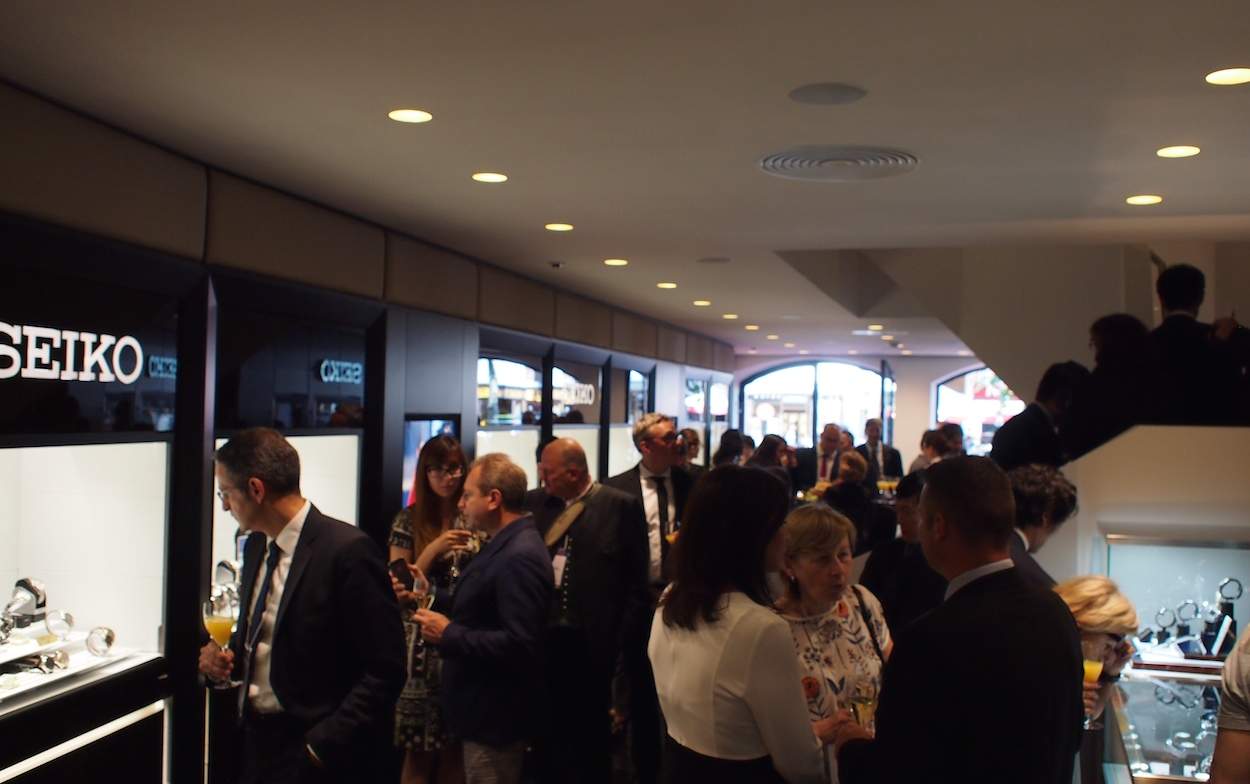 The design of the Seiko boutique is very impressive and while it isn’t huge, the setup makes it feel very spacious. It’s a nice place to look at watches and I imagine that customer service will make it a smooth buying experience. 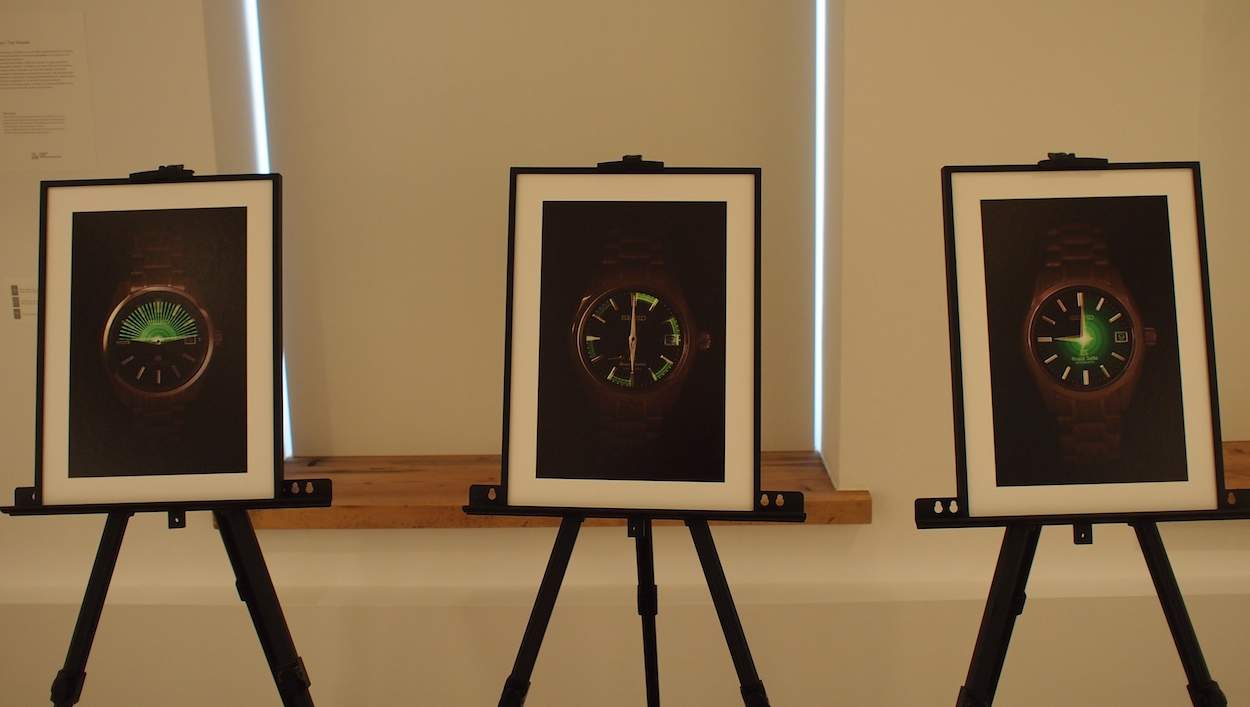 By the way, we did go upstairs, but this is essentially an open room as of today with a photography exhibit that Seiko showed at Baselworld earlier in the year. I am not sure if this will house basic service or simply offices. 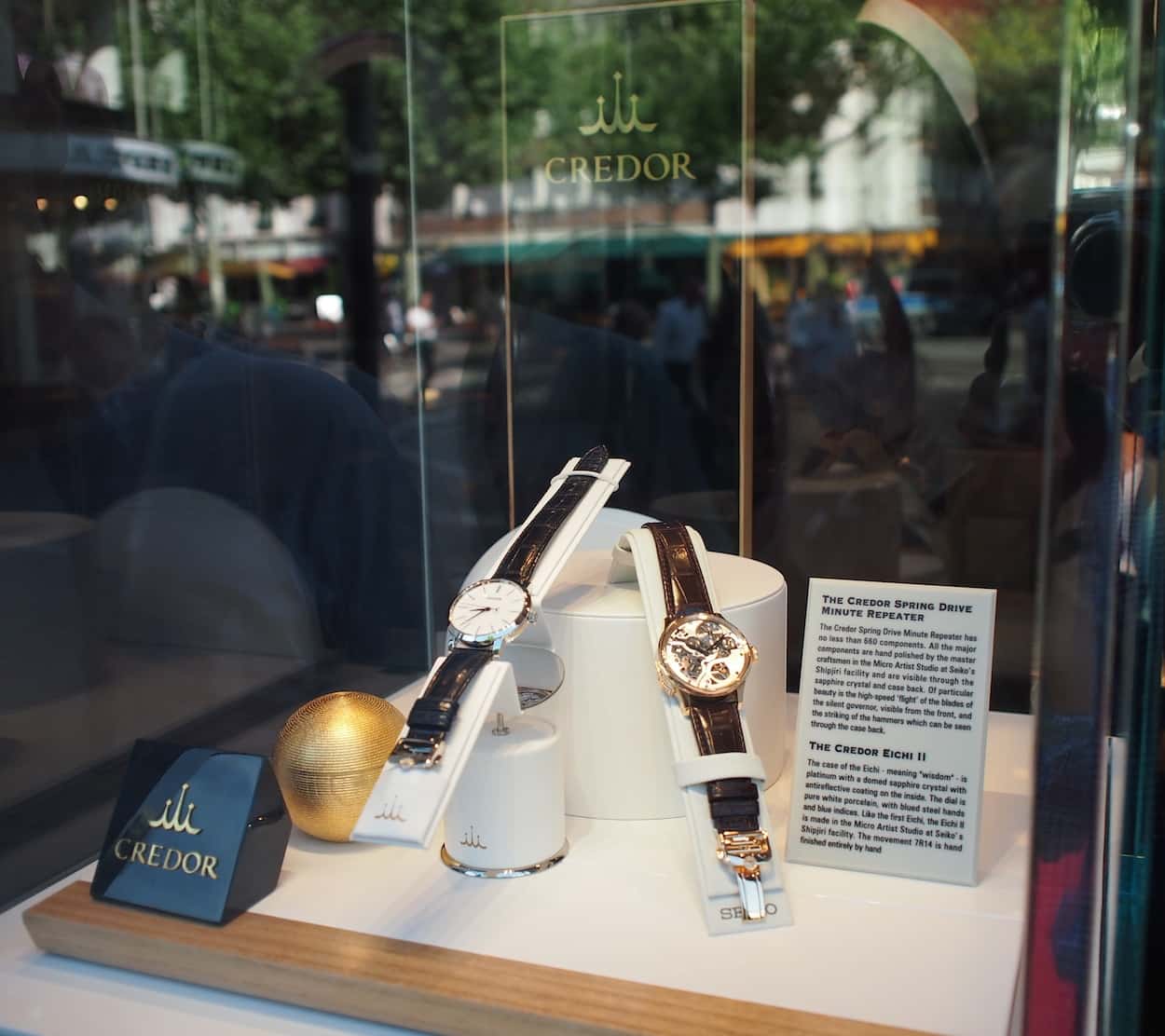 Overall, I found the selection to be impressive and, as is the norm in Europe, all prices were shown clearly next to each model. Furthermore, as in the case of most Seiko boutiques, some Japanese Domestic Market “JDM” pieces are available. Examples of this were various Tuna models, the Marinemaster 300 and a limited edition Velatura chronograph. 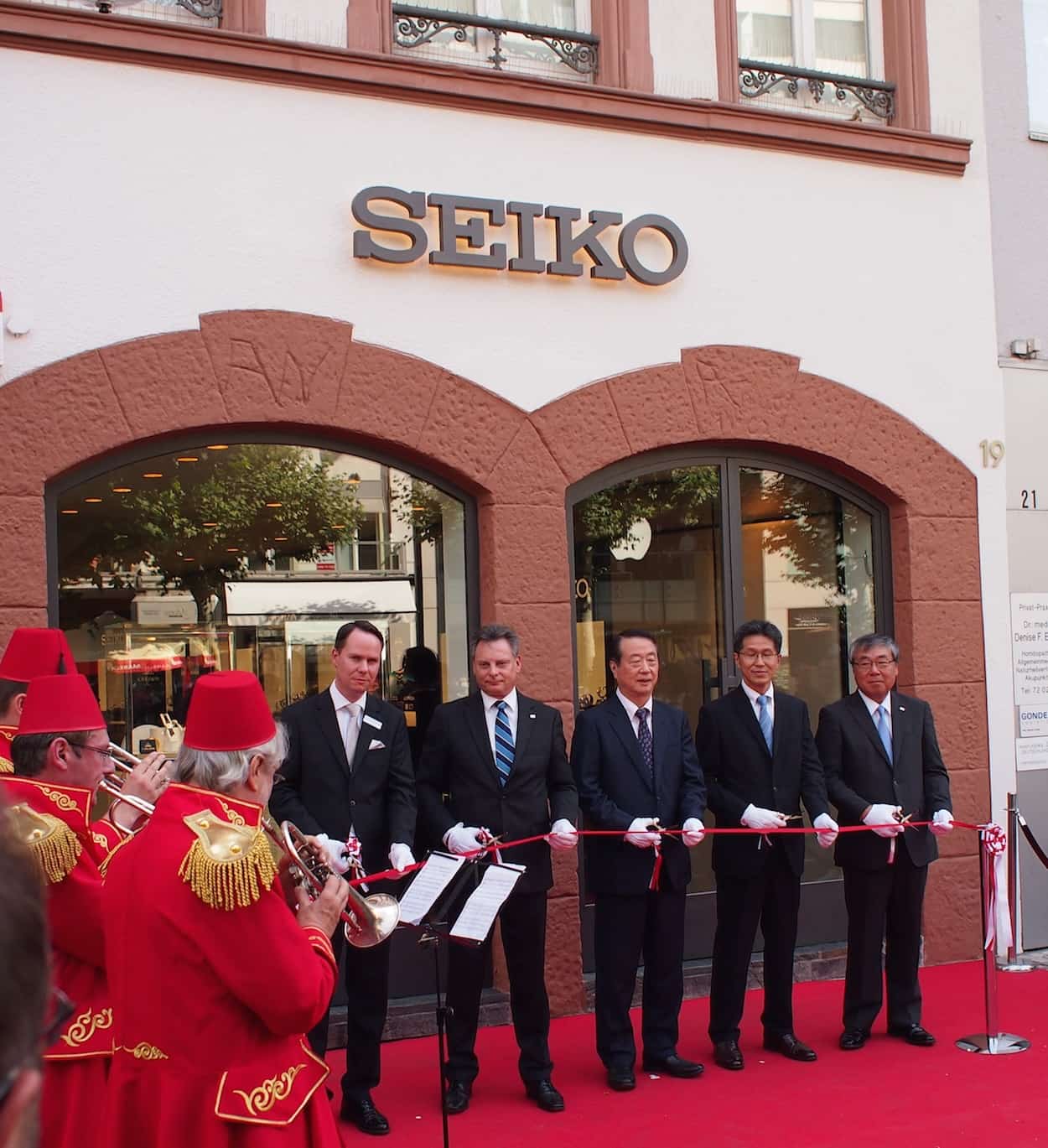 The opening of the Seiko boutique in Frankfurt is exciting news for those of us who admire the brand. For those who don’t know much about Seiko, it’s an opportunity to become more familiar with the company in a fantastic setting. I strongly recommend that you take a gander if you’re in the city “am Main”.

More information on the Seiko Frankfurt boutique may be found here.

A view towards the rear of the Boutique