The Watch That Turned Me Into A Watch Guy: Porsche Design By IWC Ocean 2000

There are different ways a watch can grab your attention for the first time. There seem to be some more common examples for an encounter that can cause a lasting impression, though. But, whichever circumstance turned you into a watch enthusiast, I feel confident that passion was involved. This is my very personal story, along some detours that initiated my passion for watches.

I don’t remember which was my first watch. I do remember a cheap plastic quartz watch, which I wore as a child, that looked cool because it had a black case. And I remember how discontent I felt when this watch with a 30m “waterproof” rating died after some diving in a pool.

My first watch that spawned a lasting impression was a gift from my parents that they gave me after I had completed my first dive course. It was a mechanical Mortima dive watch. That was in 1984, and I was 15. I didn’t regard this watch as jewelry. To me, it was an extension of my snorkeling gear. I already had a dive mask, a snorkel, and fins. This watch had turned me into a real diver! During my first years of diving, I never saw anyone wearing a dive computer. Therefore, this watch was an essential instrument for me to perform safe dives. After several years of flawless use, I inadvertently broke the winding crown. That made me purchase my first dive computer in 1993. I still have this Mortima watch. Writing this, I think I should try to get it repaired. 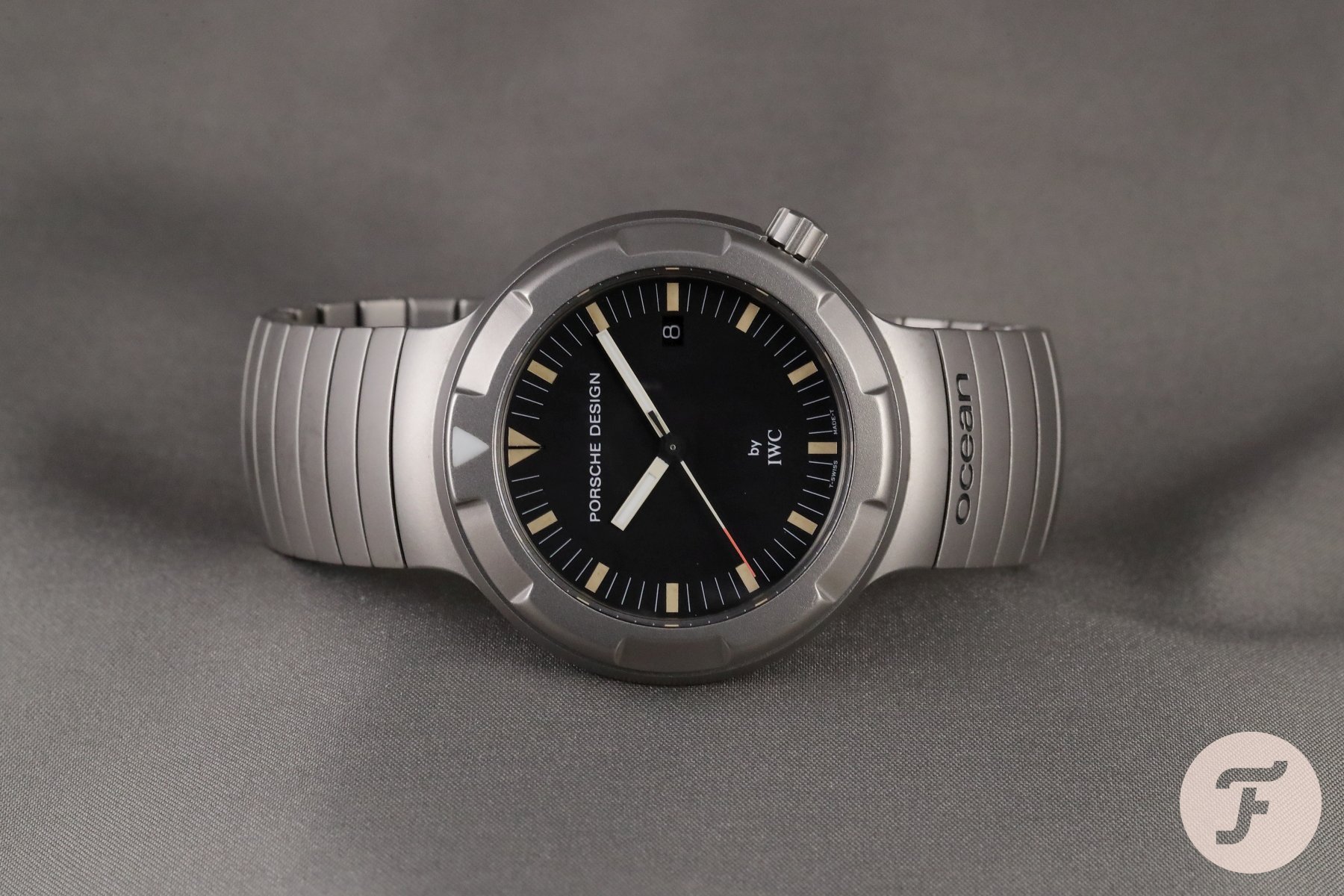 In the middle of the 1990s, when I was approaching the end of my studies, magazines on diving and underwater photography were my treats between rare diving holidays. Those were print magazines – the internet as we know it today had only just begun to emerge. After electronic dive computers had almost entirely replaced dive watches on diver’s wrists, dive magazines began to rediscover dive watches as a topic. I was hardly interested in dive watches at that time, but one small article in my favorite magazine caught my attention.

There was an image of a dive watch in a futuristic design. It looked completely different from all dive watches I had seen before, and it was made of a matt gray metal. I read that its name was Ocean 2000, the number indicating the maximum depth to which this watch was water-resistant. 2,000 meters! Unbelievable!

It was a cooperation between Porsche and a Swiss watch manufacturer, called IWC, that I had never heard of before. The metal the watch was made of was titanium. That article informed me that titanium is noncorrosive, antimagnetic, and hypoallergenic. The article gave one more hint that this watch was something extraordinary: It was the official watch of the German combat divers (“Kampfschwimmer“), the special unit for underwater operations. Wow! What a watch! 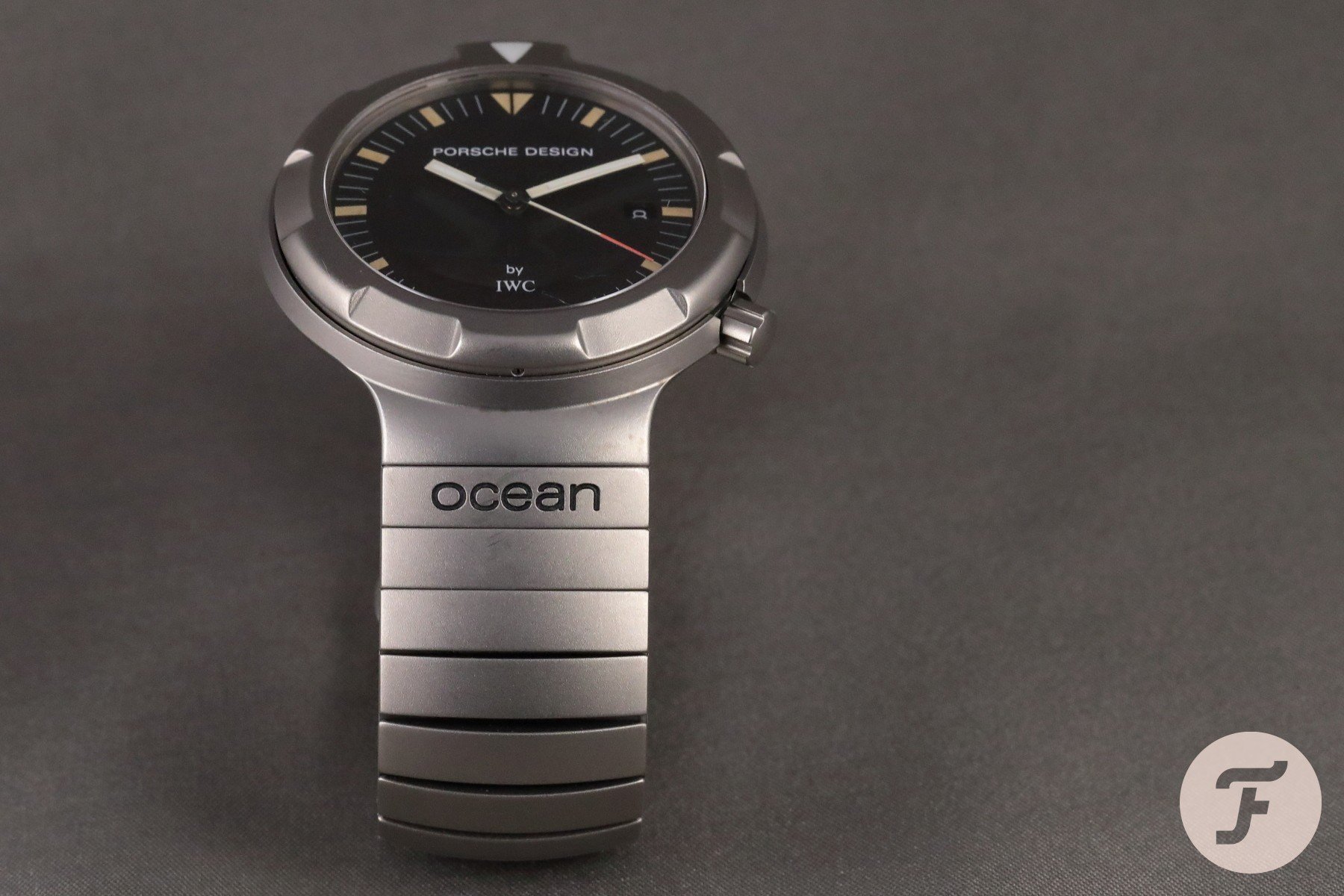 Unfortunately, that article also provided a piece of information that brought me back down to earth: the price of this watch. It should cost 4,000 German Marks. In today’s currency, those are 2,000 Euros, but back then, 4,000 Marks had the value that 4,000 Euros have today. I was a student with no real income. I remember how hard I found it to imagine that anyone would pay such an amount of money for a watch. So I forgot about this watch. At least, I thought so…

It took until 2004 before I became aware of watches again. A colleague at work involved me in his sudden desire for a precious watch. He was looking for something expressive, something with a lot of lume: a dive watch. I didn’t like the watch he finally picked, but then I noticed a new dive watch on another colleague’s wrist. That annoyed me. Everyone around me was wearing dive watches, and I, the only one that actually dived, was still wearing a cheap, small, dressy Tissot quartz watch. I had to change that! I needed a dive watch, and I had a very clear idea of how that dive watch would look. 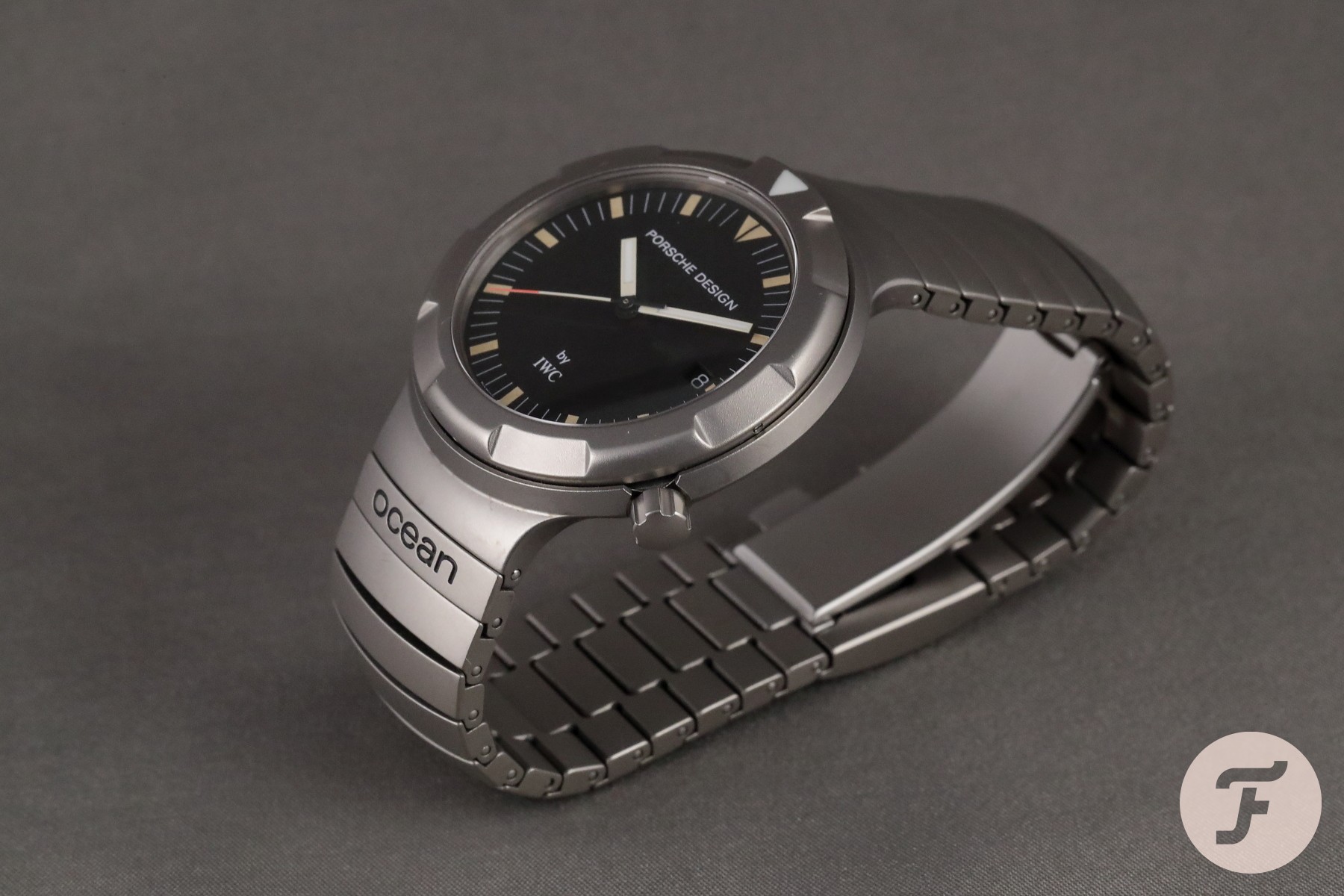 I did some research on the Ocean 2000. Disappointed, I found out that production had stopped a while ago. I didn’t dare to buy a used one, as I didn’t feel capable of deciding whether any used watch was in an acceptable condition. Instead, I started to inspect display windows of jewelers.

In one of those display windows, I made an exciting discovery: There laid a new Porsche Design watch with a design quite similar to that of the Ocean 2000. I had a plan! After checking my funds, I went to that jeweler and tried on that watch. Excited as I was, I told the salesperson about my journey. He looked at me and said: “I’d like to show you something.” Then he went away. When he returned, he held a different watch in his hand. It was a titanium dive watch, and it was an IWC. What I did not know at that moment was that this salesperson was an avid collector of IWC dive watches. He had some good arguments for the IWC, a GST Aquatimer in titanium. This was the successor of the Ocean 2000.

The problem was: The IWC cost twice as much as the Porsche Design. I had to give some thought to that and left the shop without a watch. The next day I returned and bought the IWC Aquatimer.

Several watches followed, and I became an active member of the German IWC online forum. A few of the other former members still are good friends of mine. So, the Ocean 2000 was sure to cross my way from time to time. My knowledge about watches in general and the Ocean 2000 specifically grew, but it took me until 2010 to finally buy the Ocean 2000 second-hand. 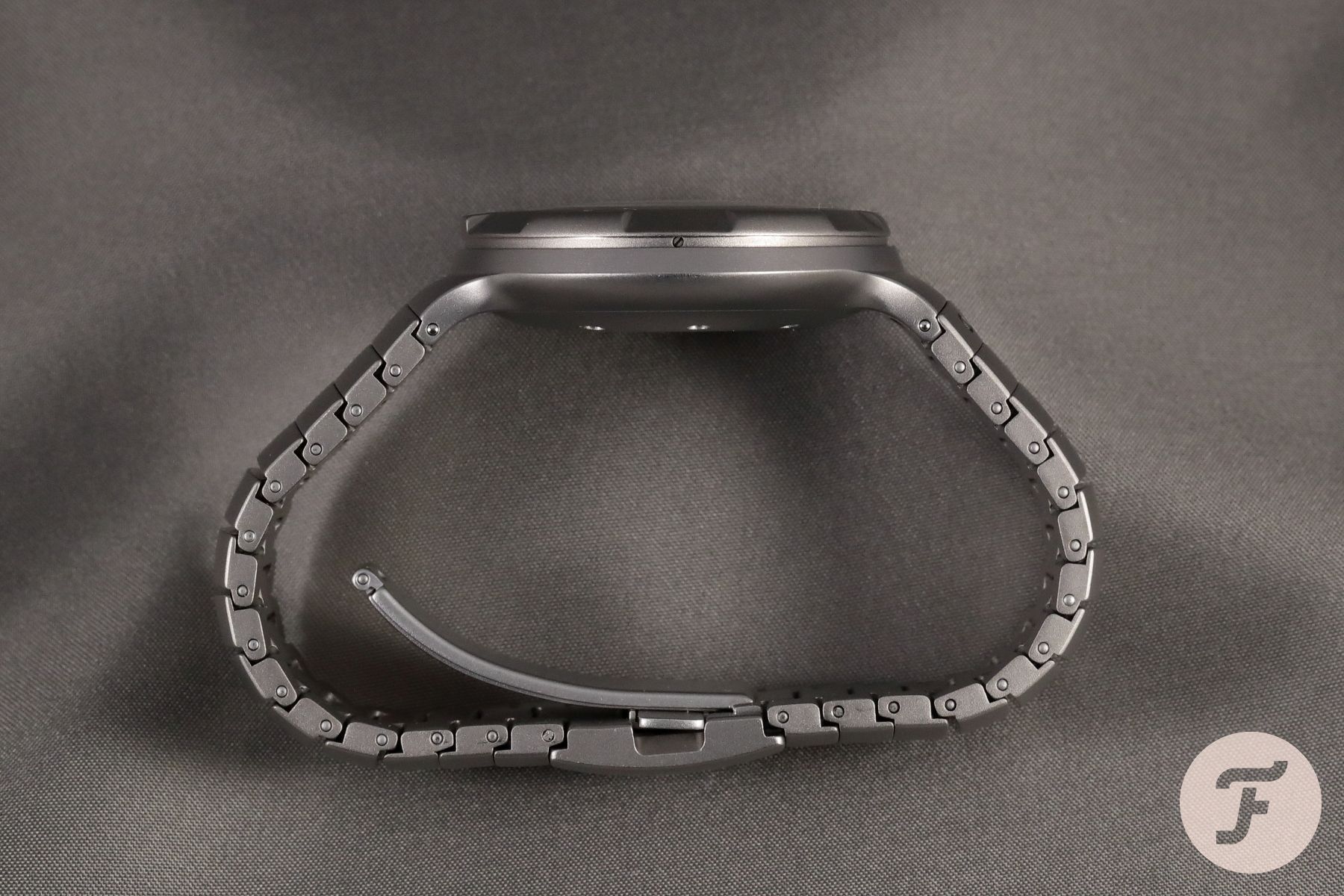 The Ocean 2000 was produced in several different versions. I am only considering the civil models here. You will find more information on the military models in the respective section below.

There were different dial layouts with serif fonts (“Fadenschrift“) and sans serif fonts, with the Porsche Design logo and without. But the dial has always been matt black with an inconspicuous date window at three o’clock. Hour indexes and hands initially were coated with tritium. Dials and hands with Super-Luminova coating only got onto these watches when these were replaced during service. On my Ocean 2000, obviously, the hands and the lume triangle on the bezel have been replaced, while the dial is original. This mixture of lume colors is typical for the Ocean 2000 watches you find today. Even though the old dial on my watch represents historic originality, I’m going to get it replaced by a Super-Luminova dial to restore the true original look.

A slightly domed crystal without anti-reflective coating covers the dial. The case’s diameter is 42.5mm at a thickness of 10.5mm. Before you can turn the bezel anti-clockwise, you have to press it down. That’s a quite practical safeguard against accidentally moving the bezel during a dive. 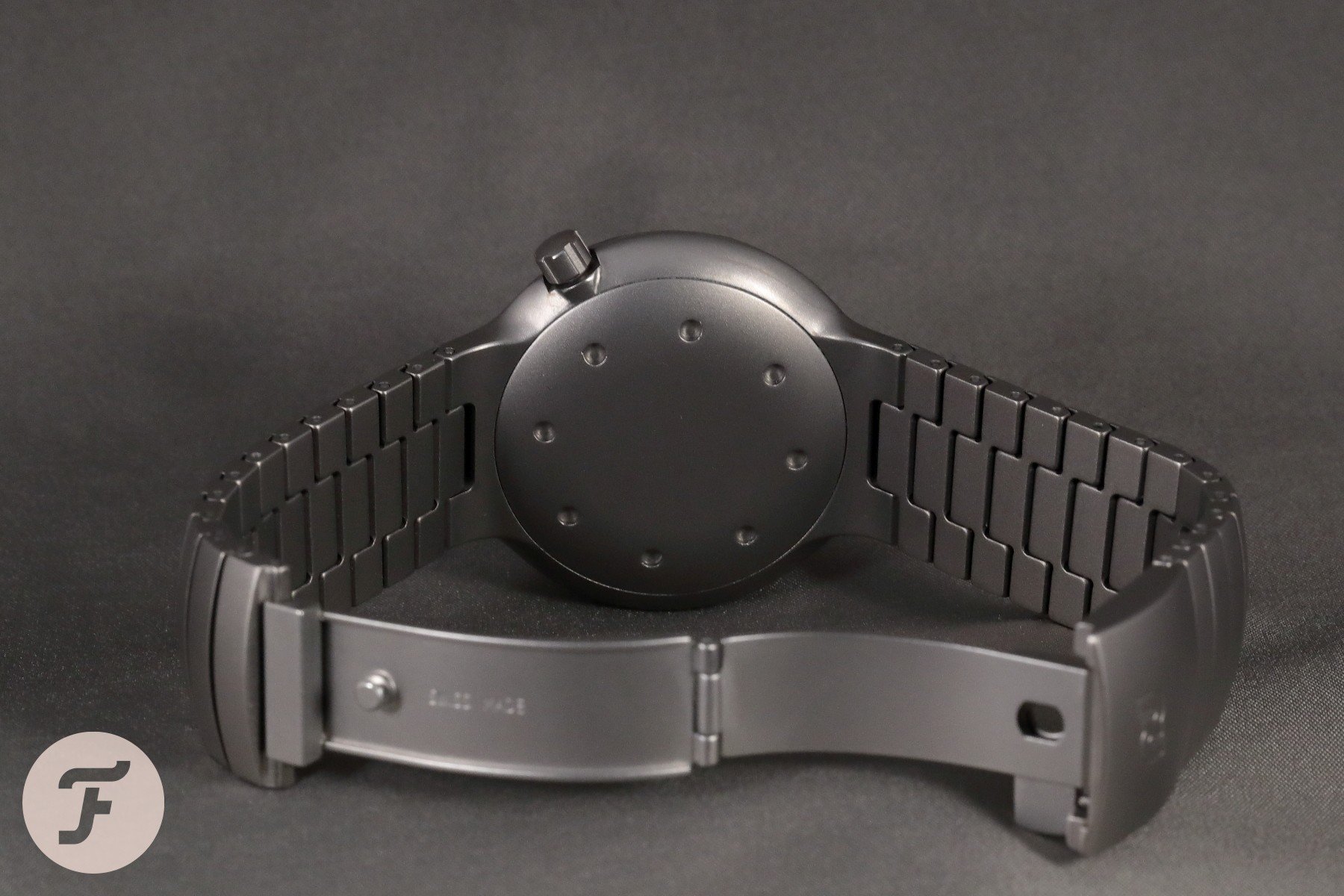 A critical aspect of the Ocean 2000 is its bracelet that IWC produced in four different so-called bracelet geometries. From the outside, all these versions of the bracelet look the same. But bracelets with geometry one and two tend to fall apart when worn for a longer period. While an Ocean 2000 with a geometry one bracelet has greater historical importance, you should definitely opt for “band geo” three or four when looking for an Ocean 2000 to wear. Mine is reference 3524 with bracelet geometry four – the last version that was built. 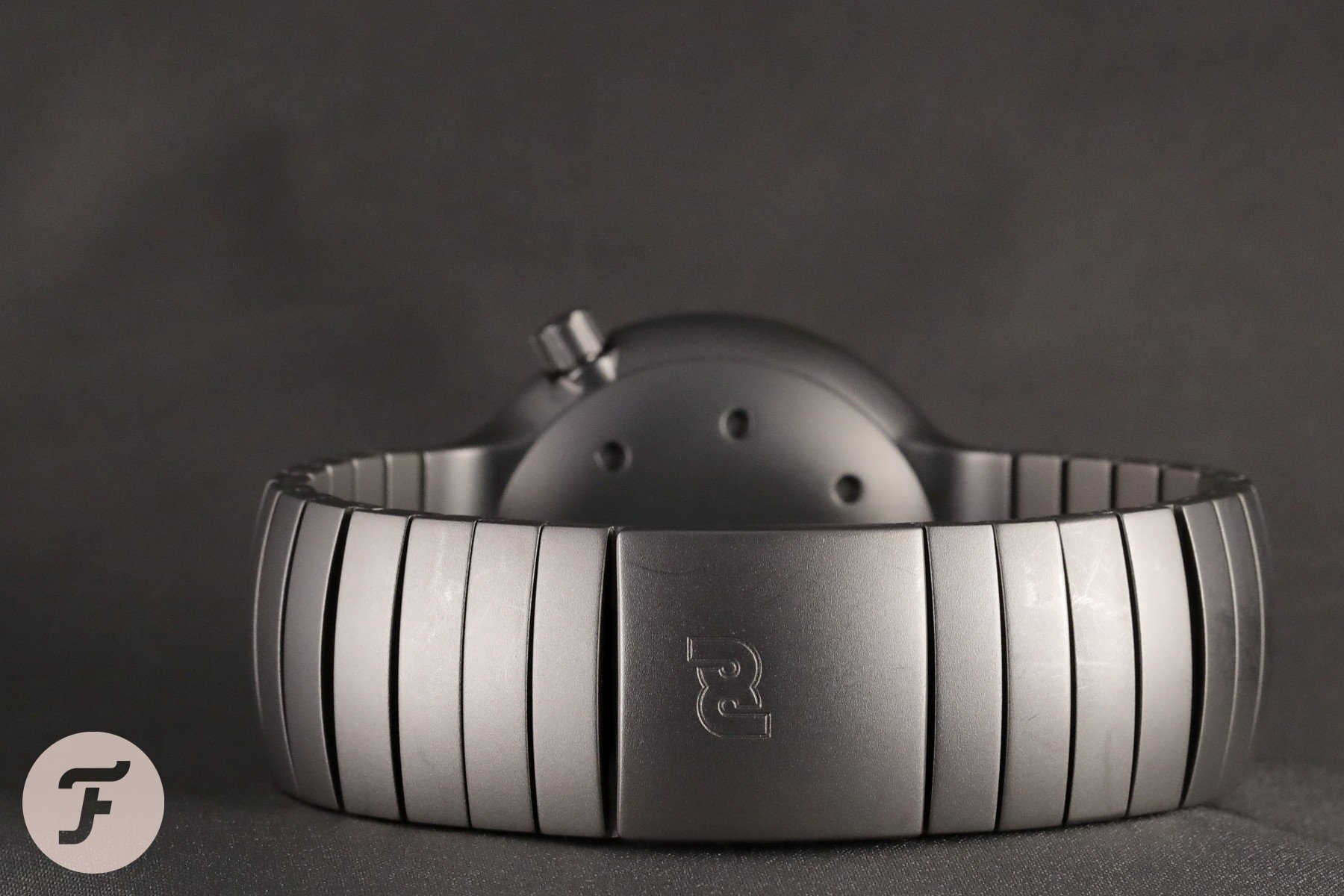 The Ocean 2000 was designed by Ferdinand Alexander Porsche, who also designed the Porsche 911. The most significant design characteristic of the Ocean 2000 is its bezel. This bezel doesn’t conform to the requirements of ISO 6425 (the norm for dive watches), but it was good enough for combat divers. The absence of any minute markers on the bezel you can find on other watches too. What makes the Ocean 2000’s bezel unique are the six indentations that cut through the edge of the bezel’s rim. The other significant characteristic of this watch is the perfectly integrated bracelet. By entirely hiding the connections between the links and the rounded shape, it appears almost organic. 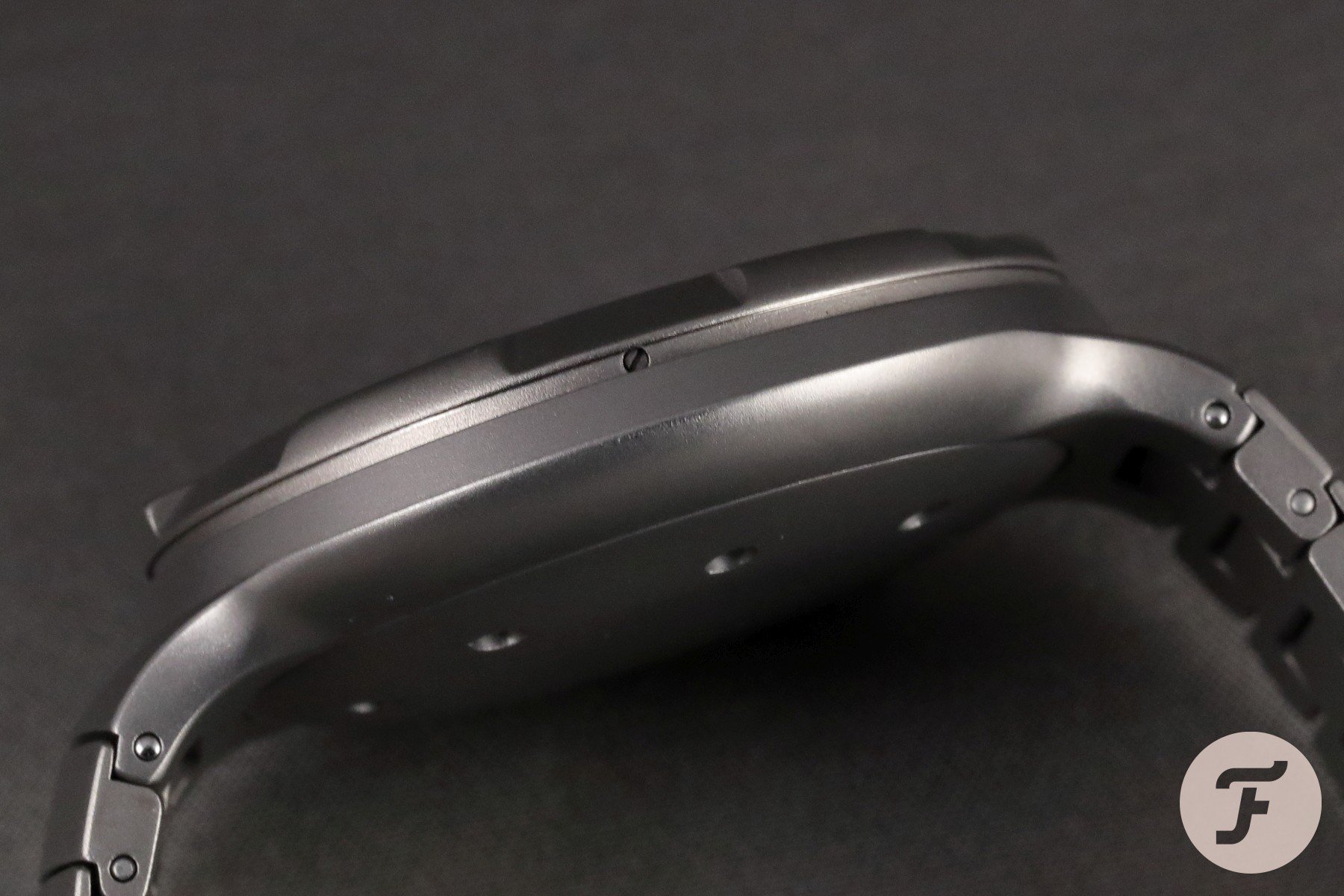 Although the bezel clearly is edged, all edges are rounded. Every detail of this watch is round. Even the latch of the folding clasp is convex. Because of the bead-blasted surface and the gray color of the titanium, every surface appears soft. In addition, the low weight of titanium turns the Ocean 2000 into a watch that is extremely comfortable to wear. Viewing the case from the side, you discover that it isn’t a slice of a cylinder, like most watch cases, but is lenticular. The lower half of the case forms one convex shape across the bottom. The bezel seems like a natural extension of the case’s upper half, not like a foreign object attached to the top as with so many dive watches. 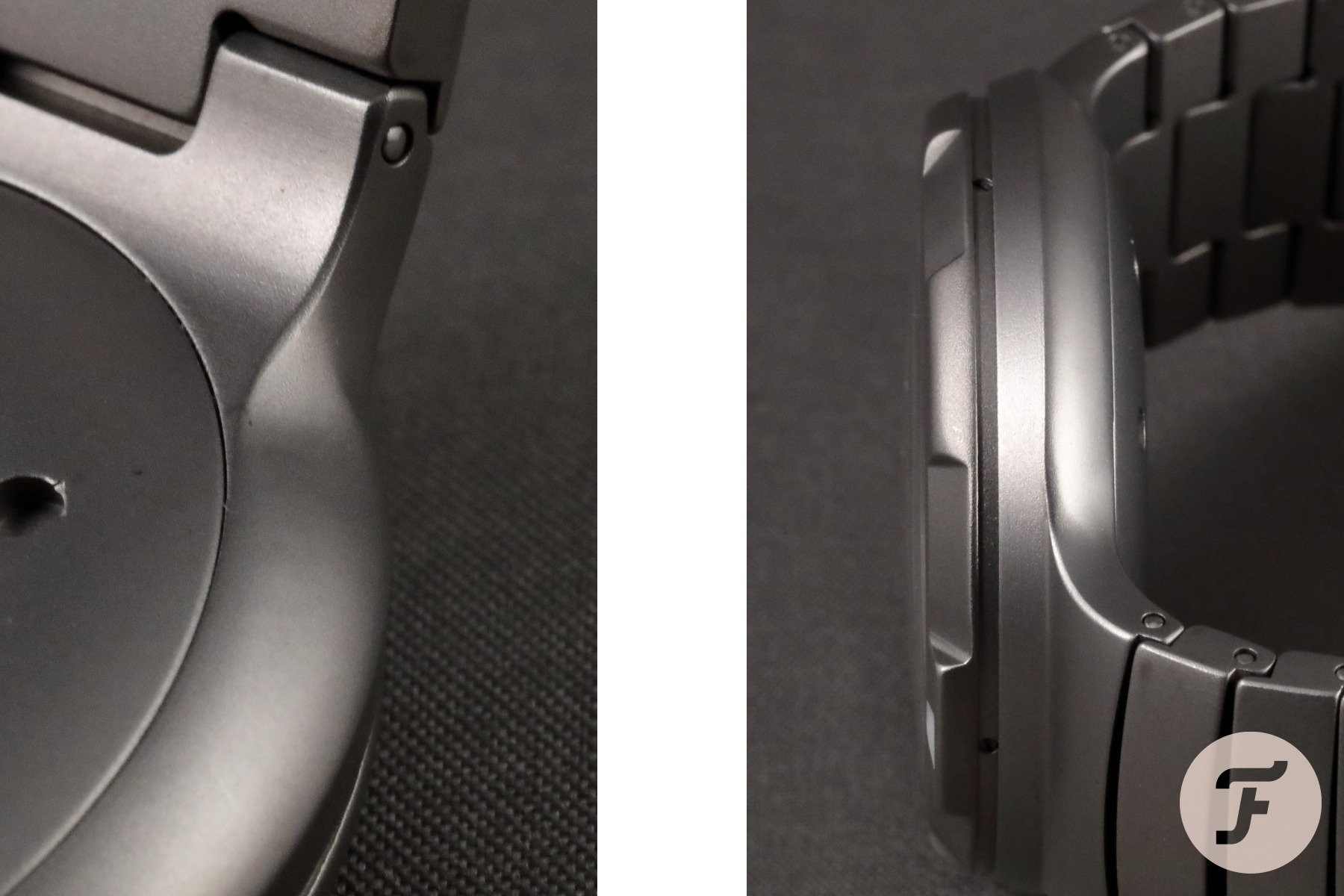 One aspect of the Ocean 2000’s design only becomes apparent at closer inspection when you take the watch off. This may be a detail for nerds, but when I noticed it the first time, it fascinated me, and it wow’s me each time I look at it. The form of the lugs and their integration into the case’s shape is just beautiful. These lugs are no arbitrary handles, screwed to the case. These lugs organically grow out of the case. I am aware I’m exaggerating. But this is architectural. This is pure art! Okay, I’ll pull myself together. 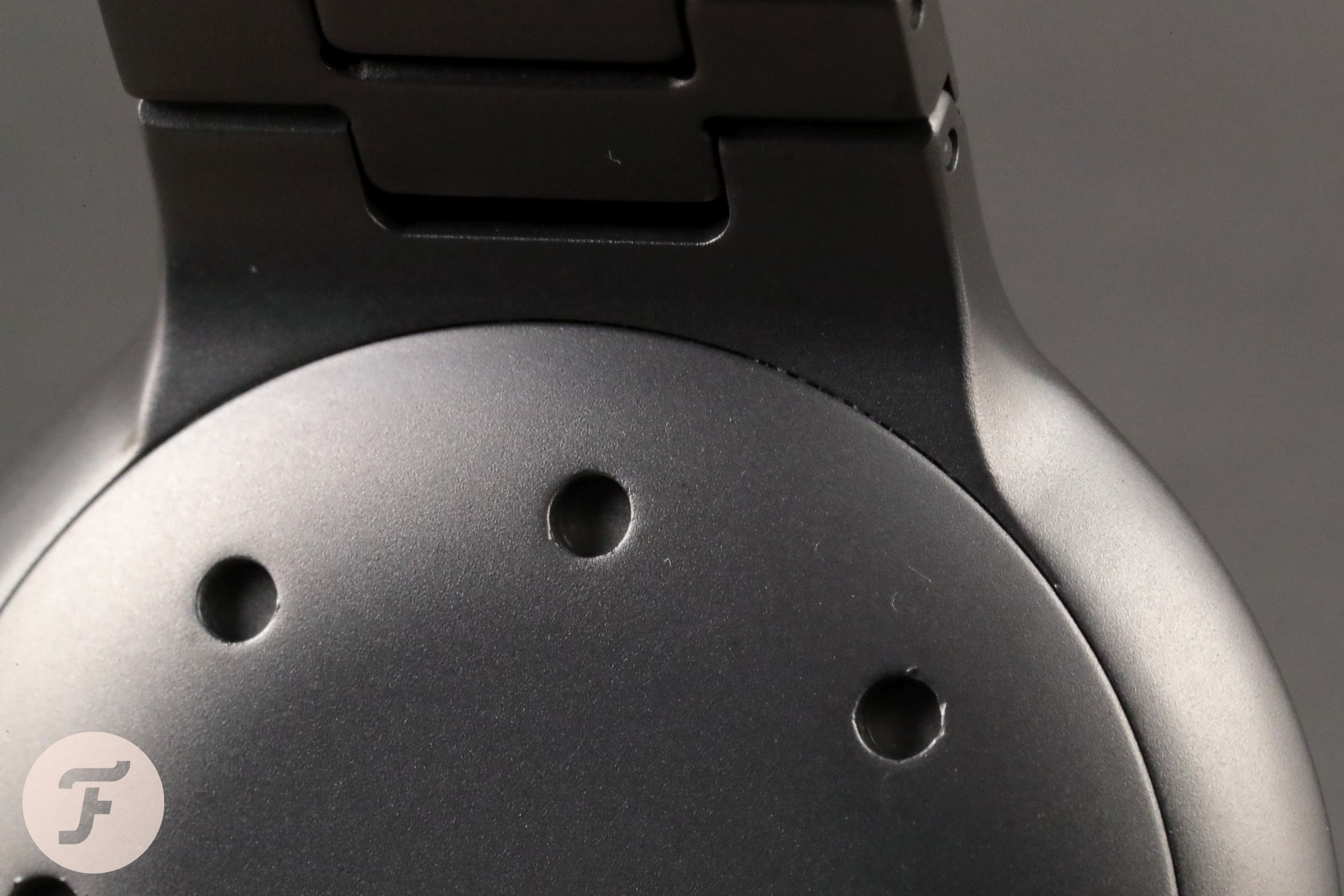 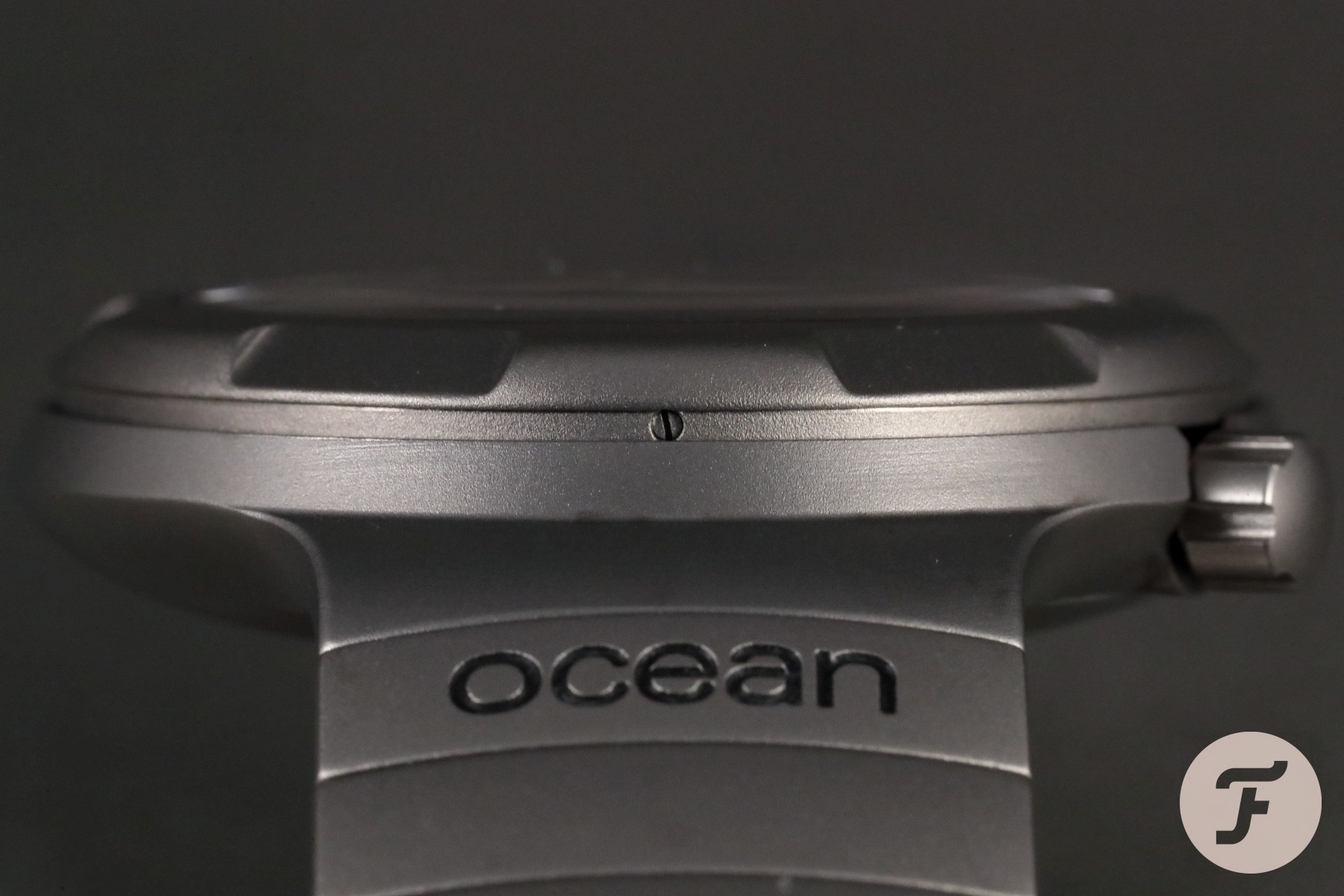 Some facts on the military versions

Hot Topics
Introducing: The Omega Speedmaster Super Racing With Spirate System
165 comments
Design Vs. Specs — Which Is More Important To You When Buying A Watch?
87 comments
New Release: The Limited-Edition Seiko Prospex SLA067J1 Diver
64 comments
My Predictions For New Omega Speedmasters In 2023
60 comments
The Best Independent/Microbrand Alternatives To The Rolex Explorer In 2023
53 comments
Popular
(From The Archives) Shut Up & Read The Truth About Cartier Watches
George Cramer
21
10 Tips For Better Watch Photography
Bert Buijsrogge
12
Two Patek Philippe Nautilus Watches: 3700/1A Versus 5711/1A
Robert-Jan Broer
16