Today we’ll kick off what I think (and hope) will become a fixture on Fratello Watches called “This Week in Watches”. For those of you who follow baseball, perhaps you grew up watching something on TV with a similar name but focused on baseball. Well, we won’t have the San Diego Chicken here and the Wizard of Oz won’t be doing any backflips, but what I aim for is a loose recap of what’s gone on during the week. I (or perhaps my colleagues may jump in as well) won’t cover everything, but we’ll try to hit the high – and low – points along with other random findings that we come across as the week progresses. As for publishing, we’ll shoot for later Friday (Central Europe time), but the weekend may be an option due to travel schedules, etc. The plan, by the way, isn’t really to give you, the reader, just a recap, but one laced with some opinion and, yes, there will be sarcasm. 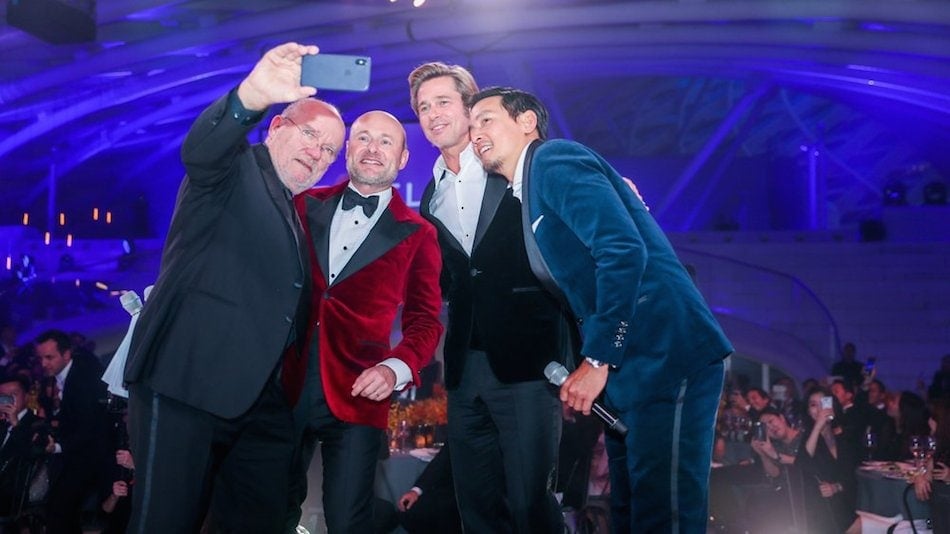 If you’re an Instagram user, go check out the account of Breitling CEO Georges Kern. This guy and his crew keep the road hot! This past week, the B team was in Beijing for its latest roadshow and it looks like Brad Pitt, he’s a rather new endorser if you didn’t know, showed up with hair that I haven’t seen (nor Mr. Kern) on my head since I was a teenager. Seriously, though, whether you like what Kern has accomplished in little over a year at the helm, the new management is getting out there and, despite re-upping at Baselworld for 2019, taking customer-focused events to a whole different level. With the new Premiers in focus – and what a turnaround on the Bentley theme-, Breitling continues to revamp its lineup for the better. Hang in there @watchfred, you’ll reach HON Circle status soon enough! 😉 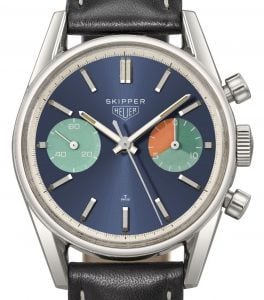 Man, vintage Heuer is down in the dumps. Since Philipps held its brand-focused auction a year ago, it’s been a downward spiral with collectors turning their noses up at the once-hot brand in favor of some other flavor of the day. Plus, we hear that some veteran Heuer collectors were offering their pieces as BOGO’s (look it up, Europeans) on Black Friday! I kid, I kid. Actually, I think the whole negative Heuer trend is going to be short-lived, but that’s a story for another day. Still, and yes this is over one week old, it doesn’t help that Christie’s flubbed its catalog listing for a rare “Skiperrera” reference 7754 for its Geneva auction held on Nov 12th. This is a super rare watch with roughly 20 known to be in existence, so the sale of one is a big deal. 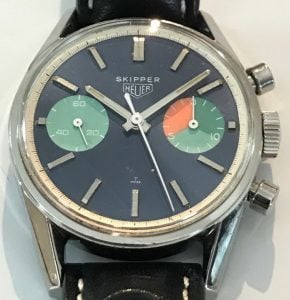 The auction house catalog showed what looked like a minty watch, but in real life (as found out by collector Carlo S when he requested additional pictures), it looked more like a Brach’s Star Brite mint that had rolled around in a sandy playground after falling from a child’s mouth. Adding insult to injury, some Instagram warriors proclaimed that the advertised and the real looked amazingly similar. Fake news, one cried! Well, I showed my 4 year old the two watches and asked if they were the same and she quizzically looked at me and said, “Daddy, one looks dirty.” Case, erm, closed…the watch still hammered for 53,750 CHF all-in. Jeff Stein and On the Dash do a nice job of covering the controversy here. 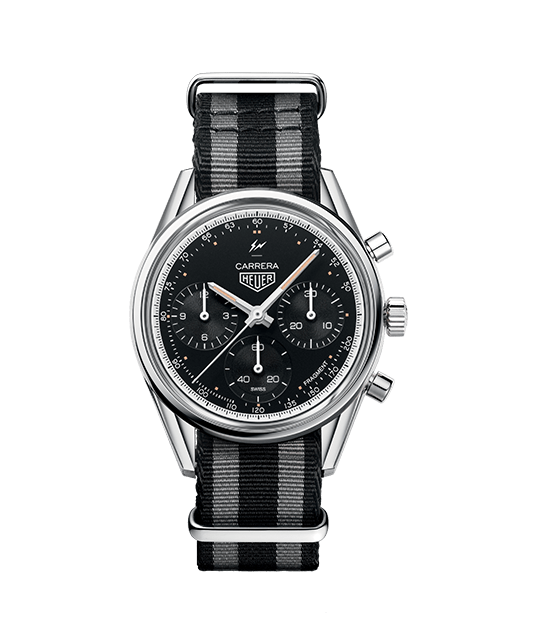 We’re not done with Heuer, or the brand with a TAG in front. First, we saw the release of a TAG Heuer x fragment collaboration which gave us a near replica of the famed 2447NT Carrera from the 60’s. At $8100, this new 3-register Caliber 2-powered chrono looks nice. It sits in the 39mm “glass box” case we’ve seen before and I really like the way it fits the wrist. But, I have a few criticisms. First off, I don’t know the famed gentleman, Hiroshi Fujiwara, who runs “fragment” and I’m sure he’s a creative genius, but the shapes within his logo (and on the dial of the Carrera) are about 20 degrees shy of looking like something pretty damn evil from about 80 years ago. Weird. Second, and this is pointed at TAG, why not just make this watch and a white version and be done with it? Heck, it works for Rolex and the Daytona. The original Carrera is a timeless icon and anything that’s used the name since hasn’t been quite the same. Just give it to us already and slow down in giving us more versions of the chunky Autavia. 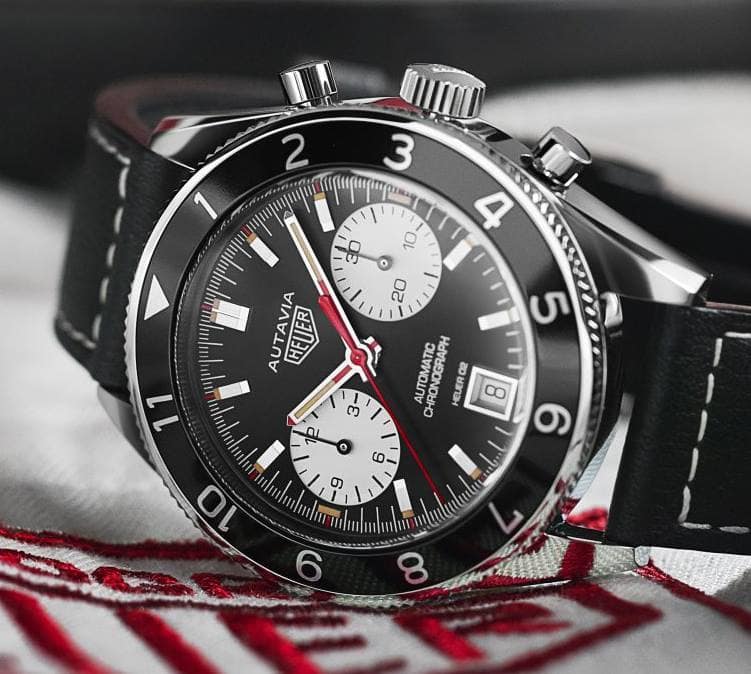 Speaking of the beefy Autavia, now we have a Viceroy 1972 version of the Rindt (does that make sense?) for the US market. Yes, we know that Omega gets a jabbing for releasing so many Speedmaster LE’s, but it feels like TAG Heuer is out to single-handedly crush Omega’s record all within a couple short years! It’s sad that I don’t like the modern Autavia because the original Rindt is one of my favorites, but this Viceroy feels odd. Even the most faithful Heueristi are choking a bit. The watch contains elements from a 70’s model transplanted onto a modern watch that’s supposed to be a reinterpretation of a 60’s model. It lacks the original model’s tachy bezel, which is a strange deviation. Notably, this is the first 2-register version of the Caliber 02 movement we’ve seen in the newish Autavia case. Head to Calibre11 for a nice overview of the watch. 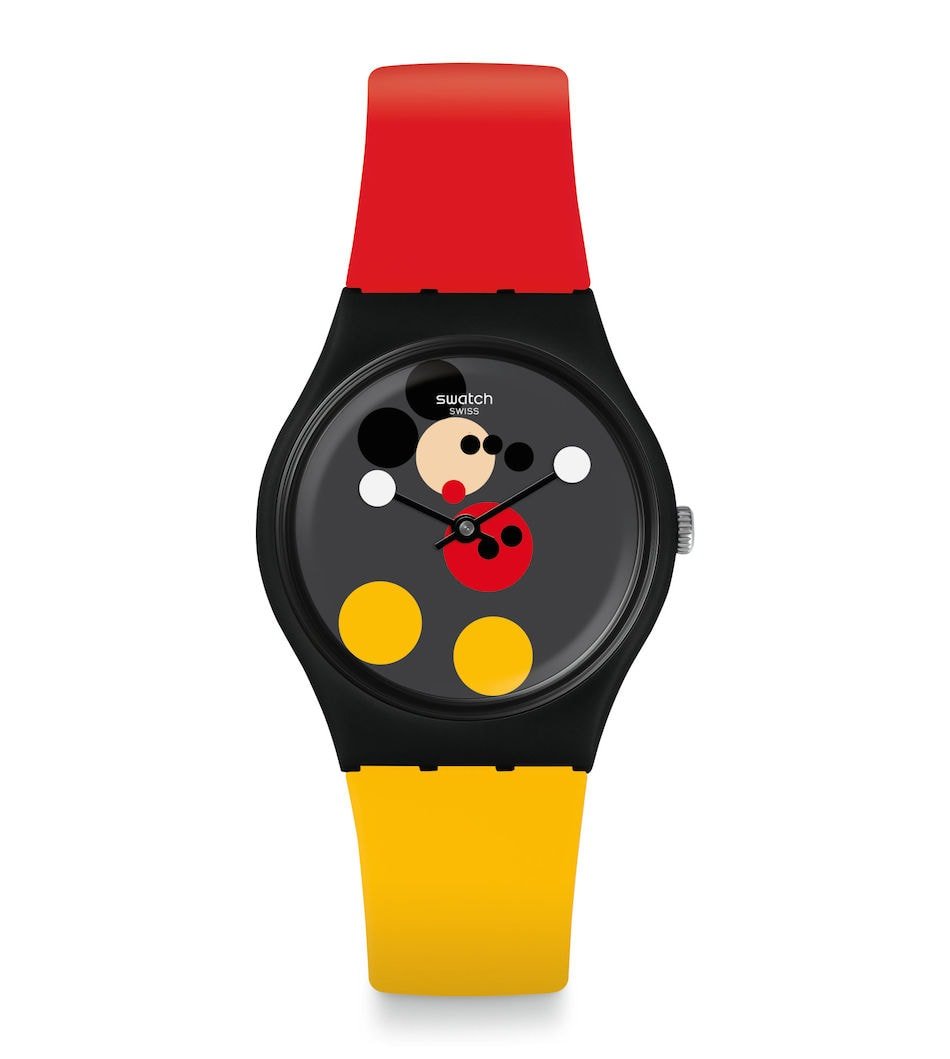 Who’s the Leader of the Club?

The leader of the club is 90 and his name is Mickey Mouse. Last weekend, Swatch dropped a couple Damien Hirst-designed pieces celebrating the 90th birthday of the world’s most famous mouse. One, the “Spot Mickey”, in 34mm was offered in a run of 1999 pieces exclusively online for 165 Euros and only last Sunday the 18th. The other, the 40mm “Mirror Spot Mickey”, is available online for 110 Euros (it’s still available in Germany, but seemingly not in the USA) in a run of 19,999 pieces. The short-run piece sold out quickly and the Swatch Group, once again, had some IT problems in handling the traffic and ordering. 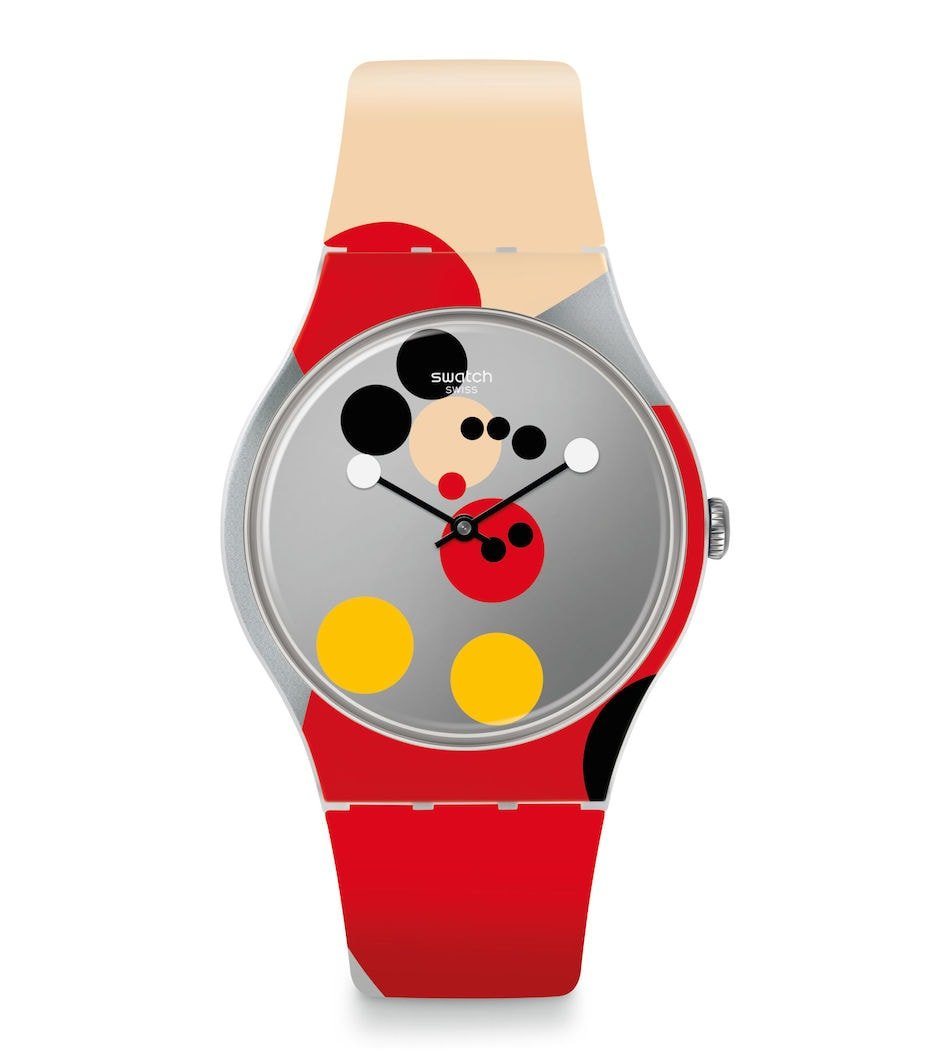 Yours truly missed out on the Sunday piece, but bought the other. I’ll live. It was annoying, but also good to see that Swatch still has the ability to get people all hot and bothered. It brings me back to the 90’s when I collected the things – at retail prices thankfully – only to see that market completely fall apart. A continuous avalanche of limited editions and collaborations ultimately helped to kill that market. It’s good to see that brands learned a wise lesson from that era… 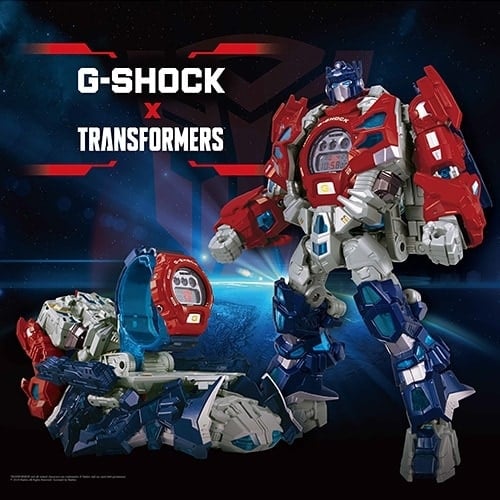 More Than Meets the Eye

Speaking of collaborations, Casio just announced a Transformers collaboration to celebrate the toys’ 35th anniversary. Done up in the guise of the original Optimus Prime, this thing looks badass and will look fantastic on my desk. Robert-Jan and I both have our orders in, so let’s see if our mutual friend in Japan can get the job done once the watches are released in December. At roughly $300, this is one of the more fun, and infantile, things we’ll hopefully get to own. 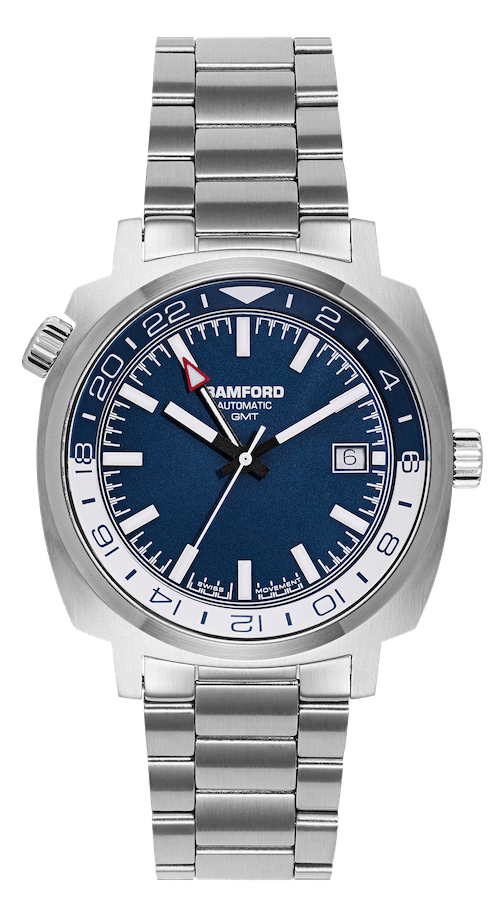 This week, we saw the release of the Bamford London GMT. I’ll reserve complete judgment until I get to hold one of these, but my initial opinion is one of ambivalence.  Let’s hope my stance improves upon handling. First off, the case reminds is a straight up retake on the Zenith Sub Sea A3635. That’s not bad, but it’s not exactly novel. Then, is placing the winding crown at 10:00 a good idea? Otherwise, we have a Sellita inside and a handset and dial that remind me of a lot of Asian-sourced micro brand watches that I review. Is that a bad thing? Not really. Pricing is in the range of $1000 – 1200. Unless the Werewolves of London sport it en masse, I fear this watch will find itself lost in the sea of mediocrity.   Amongst its competition in the growing number of English-based brands such as Chris Ward and Farer, the Bamford is in for a mighty battle. Head to their official site for a gander. 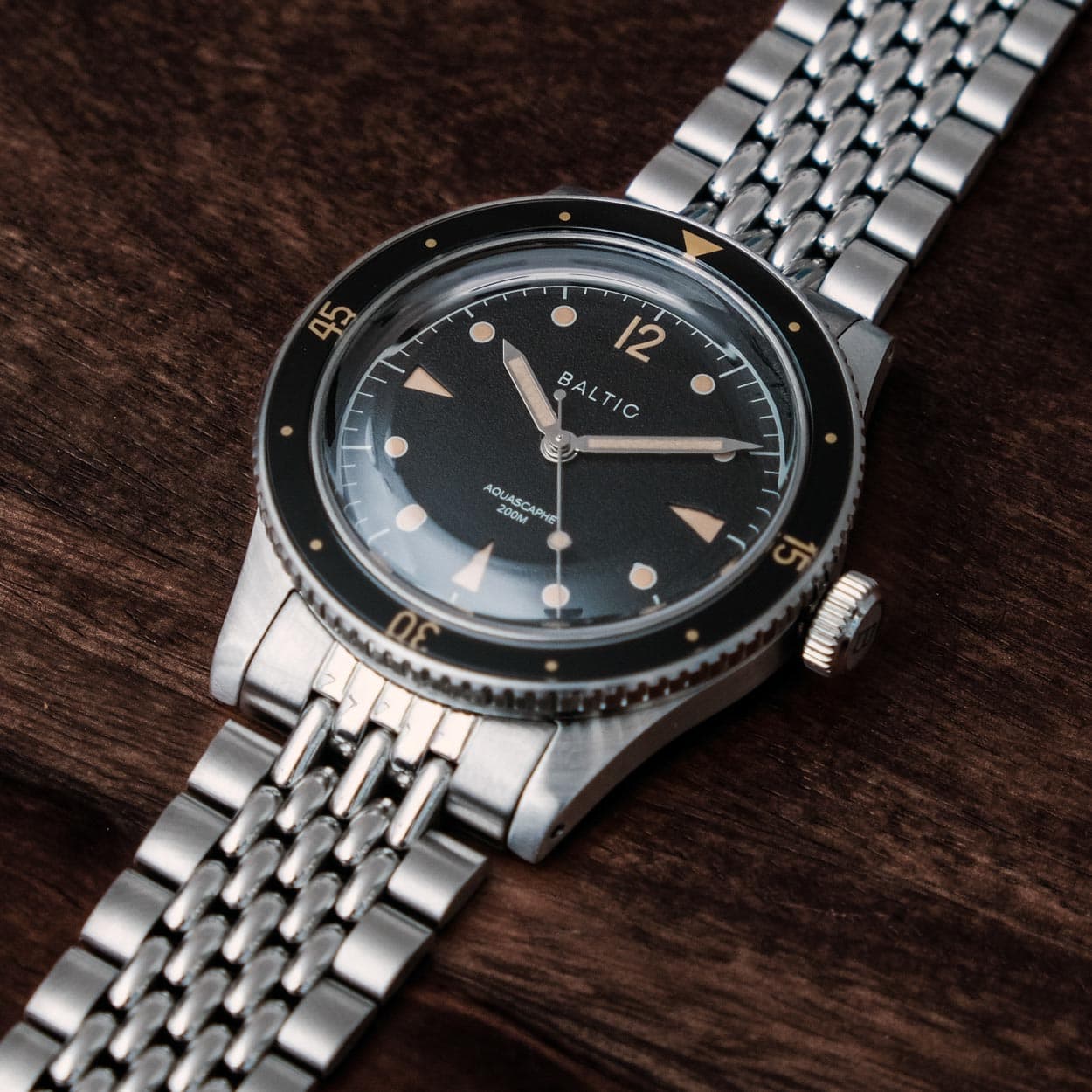 Baltic Goes For a Swim

Earlier this week, we took a look at the new Baltic Aquascaphe, a vintage-inspired diver from the French-based micro brand. The watch went on sale as a pre-order (shipments aren’t due until June of 2019 – yikes!) and the first 300 numbered pieces were gone in 27 minutes. Not bad at all! At under 40mm, this is a rather faithful skin-diver-esque release complete with either a Tropic-style strap or beads of rice bracelet. A Miyota sits inside and that helps keep pricing below 500 Euros on strap during the first month’s pre-order period – head here for ordering info. I’ll look forward to handling one of these, but it looks like another hit. The Aquascaphe feels like a great holiday gift for your significant other. Just ensure that “other” is still significant by the time they start shipping.

And finally, Robert-Jan and I will head to the land of fish and chips, tight trousers, and cask ales for a look at SalonQP. It’s been a couple years, so let’s see if Hearst UK can help re stoke the fires of what was once a heaving and truly fun show. More on that next week…