The Three Omega Speedmaster References That Were Worn On The Moon

We are often asked which Speedmaster models have been worn on the Moon. Somehow, people think the caliber 861 Speedmaster Professional (145.022) was one of them, but this isn’t correct.

In 1962, NASA astronaut Walter “Wally” Schirra wore his Omega Speedmaster CK2998 in space. As a result, the 2012 introduction of the First Omega in Space watch(es) was based on the case of the original CK2998. However, Schirra’s watch was privately owned and had nothing to do with the chronographs officially selected by NASA. It wasn’t until 1964 that NASA requested brands to provide a quote for a wristwatch with a chronograph function. Only four brands responded to that request: Omega, Rolex, Longines-Wittnauer, and Hamilton (you can read about them here). Rolex with their reference 6238 chronograph, Longines-Wittnauer with their 235T reference, and Hamilton (whose development team must have been asleep at the time of the request) with a pocket watch. Omega sent the Speedmaster, reference 105.003. We covered the selection process in-depth in this article on Fratello. 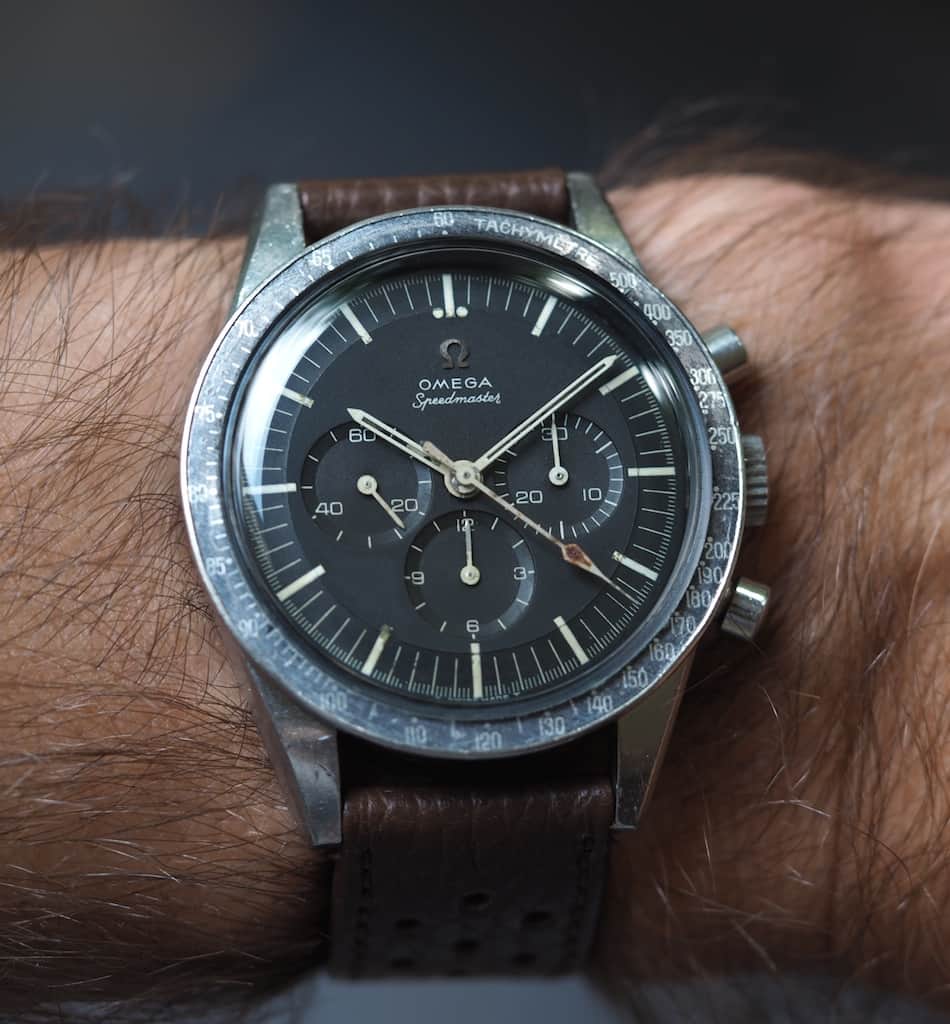 This model, with straight-lugs and no crown guards, is often also referred to as the pre-Professional, or “Ed White” (now sharing its nickname with Omega’s latest release). Not because astronaut Ed White was the first to use it in space (that honor belongs to Grissom and Young, who did so a few weeks after the official qualification date during the Gemini III mission), but he was the first to use it during a spacewalk (as part of the Gemini IV mission). Pictured below is a 105.003 from the Omega Museum in Bienne, you might notice that the large chronograph second hand is a later make. The watch also doesn’t feature the famous and sought-after DON bezel. Parts like these are often replaced during their lifetime due to damage. In the above picture, the correct second hand and bezel can be seen. The 105.012 is the first Omega Speedmaster Professional. This reference was introduced before the watch was qualified by NASA, and also the ‘Professional’ wording on the dial was before that time, so it has nothing to do with the fact that NASA decided to use the Speedmaster as their official chronograph. For the Apollo astronauts, Omega shipped the Speedmaster 105.012 to NASA. It had a different case shape, now with the crown and pushers recessed in the case band, but it didn’t need to be tested (again). The test work (and the results) of the Speedmaster 105.003 were fine, and this updated model would pass those tests as well. This Speedmaster reference was worn by both Neil Armstrong and Edwin ‘Buzz’ Aldrin and, therefore, became the first Speedmaster worn on the moon. Legend has it that Armstrong left his Speedmaster Professional 105.012 in the module, as the (Bulova) board clock stopped functioning properly. 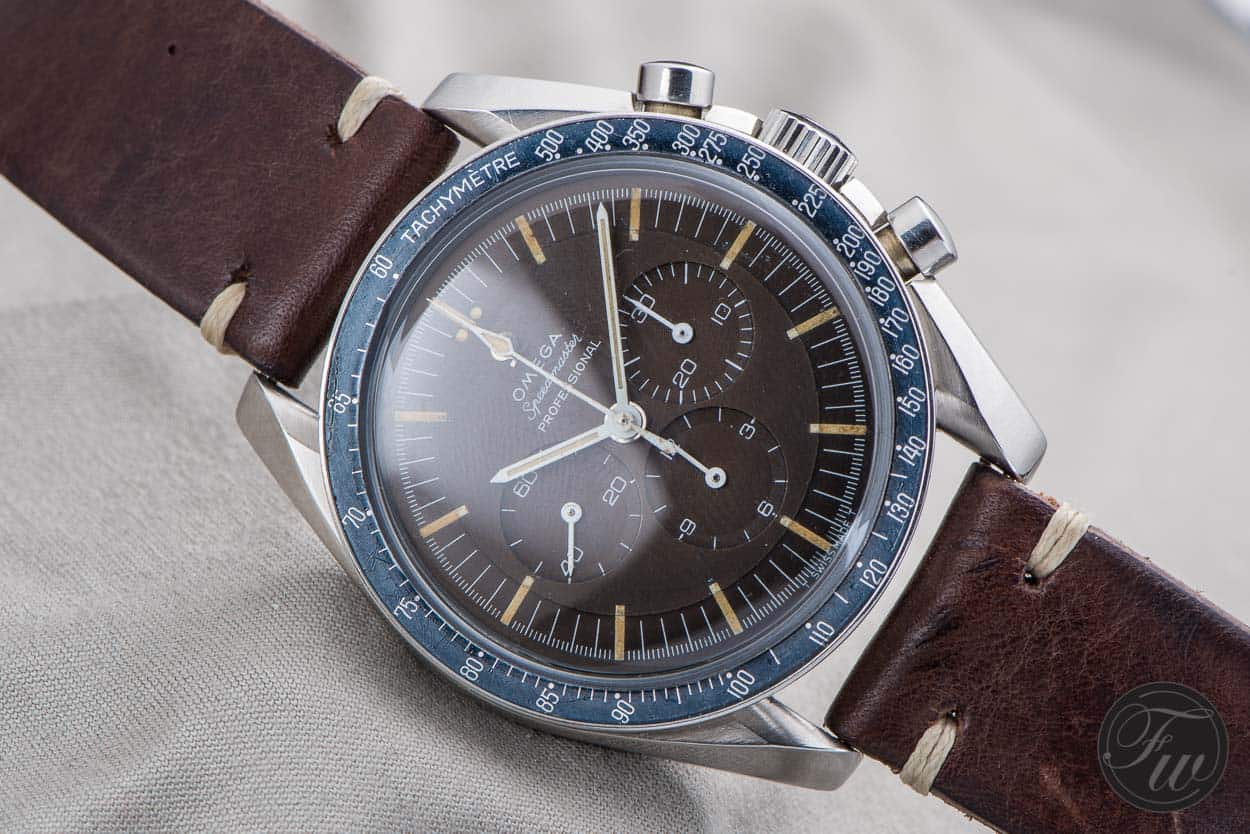 In 1967, Omega introduced the successor of the 105.012, named the 145.012. The main difference from the 105.012 is the pusher construction, which was markedly improved on the 145.012. There’s also another difference with earlier versions of the 105.012, as those were delivered with double bevel case back. The 145.012 was worn by Michael Collins during the Apollo XI mission, but since Collins remained in the command module, it didn’t make it to the surface of the moon on that occasion. The 145.012 did have its day in the sun, however, and was used on the moon during later missions.

Although the Speedmaster Professional 145.022 was introduced in 1968, it was never used on the moon.

Strangely enough, the 105.003 continued to be used by astronauts despite the delivery of the updated 105.012 and 145.012 references. This was because NASA still had the 105.003 in their possession since the procurement of 1964. This is why all three references were used on the moon between 1969 and 1972. Although the Speedmaster Professional 145.022 was introduced in 1968, it was never used on the moon. That particular watch was only qualified in 1978, for the Space Shuttle program. The case back of the 145.022 is where the “Flight Qualified by NASA for all manned space missions” text can be found. 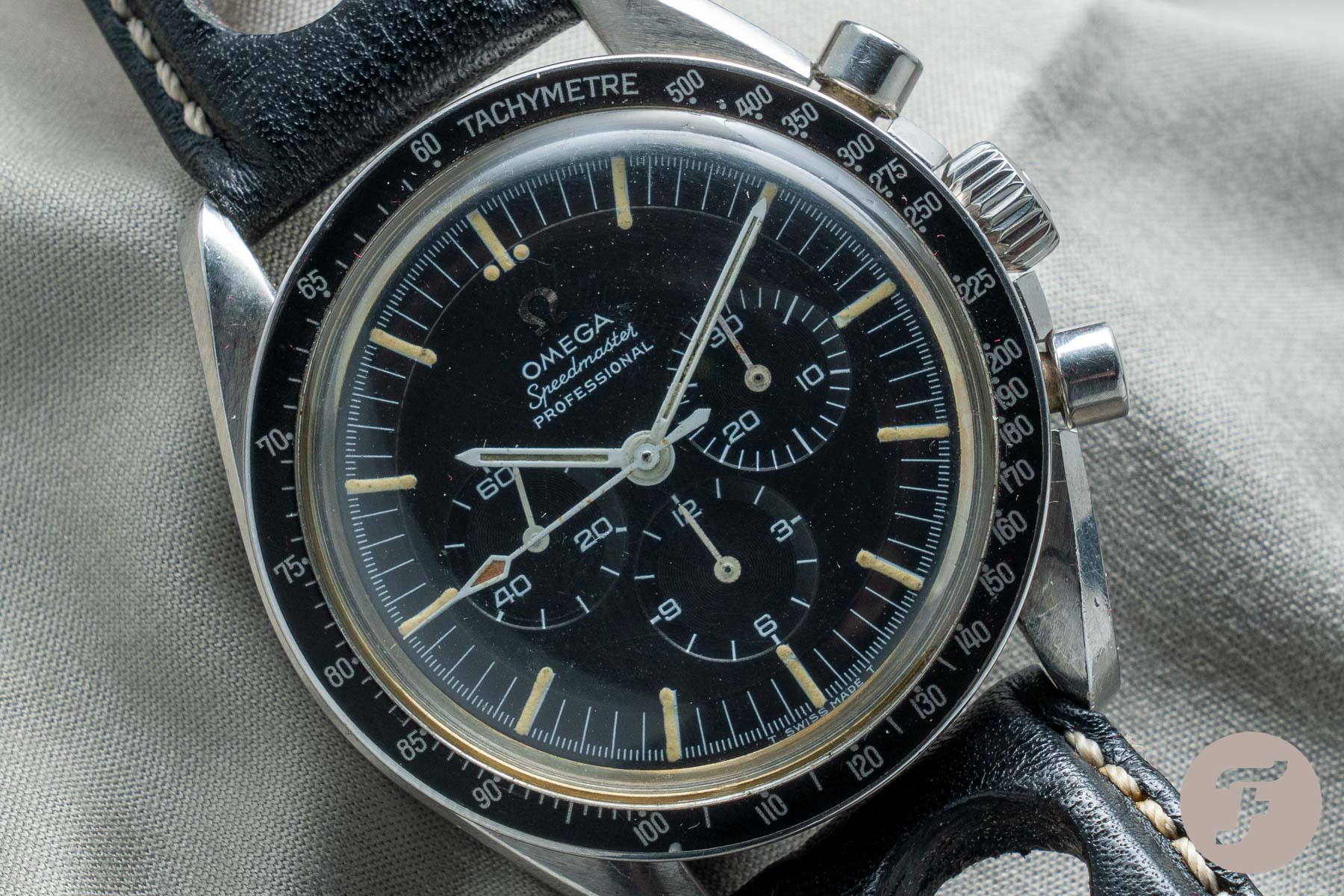 I am sure that most of the information above was already known to the enthusiasts out there, but we still receive a lot of questions from people who have one of these three references and want to know whether theirs was used on the moon. Even more often, we receive the question of whether the Speedmaster Professional 145.022 with caliber 861 was used on the moon. So I hope this short article underlines once more which exact references were used on the moon. All of them were powered by caliber 321 movements. A significant movement, not only because of its beauty but also due to its role on the wrist of the Apollo astronauts. In 1968, Omega started using the caliber 861 movement for two main reasons: Higher accuracy due to a higher ticking number and production costs. Caliber 861 was a bit simpler and, therefore, cheaper to produce. The Lémania 2310 movement, similar to Omega caliber 321, was later used by Patek Philippe and Breguet for their chronographs. Caliber 861 was replaced by caliber 1861 in 1996/1997 and can still be found in today’s Omega Speedmaster Professional and Speedmaster CK2998 models, for example. Omega’s new caliber 3861 (Master Chronometer certified) will likely find its way into the Moonwatch at some point. Omega’s re-introduced caliber 321 is a bit more exclusive, and can be found in the Speedmaster Platinum Moonwatch from 2019 and soon in the new steel Speedmaster “Ed White.”

That said, if you want to have a watch that is (nearly) identical to the ones worn on the moon, the caliber 321 powered references are the ones to aim for. Learn more about the history of Omega here.

Hot Topics
Are You Still After An Omega × Swatch MoonSwatch?
108 comments
Introducing: The New Seamaster Professional 300M 60 Years Of Bond — With A Special Animated Case Back
107 comments
Introducing: The Oris Divers Sixty-Five Fratello Limited Edition
104 comments
It’s Time To Invest In A Dress Watch — Our Picks From Breguet, Omega, Grand Seiko, And More
74 comments
Rolex Is Going Certified Pre-Owned
66 comments
Popular
A Question From A Reader: “Which Modern Speedmaster Is Closest To The Original Moonwatch?”
Robert-Jan Broer
14
An Overview Of All Omega Speedmaster Apollo XI Models
Robert-Jan Broer
17
Grand Seiko SBGA211 ‘Snowflake’ And Why I Didn’t Buy It
Robert-Jan Broer
22