Tissot has had a connection to the NBA as well as other basketball organizations for a long time now. For this, having at least one watch in the collection that celebrates this partnership is a must. Still, the brand went a bit further. Tissot does not only associate a watch, the SuperSport, with its affiliation but also a new collection of straps.

The NBA (National Basketball Association) is one of the four major sports leagues in North America, consisting of American and Canadian basketball teams. As such, the market is vast, and being part of this grand alliance is crucial. Tissot has been the official timekeeper for the NBA since 2015. Last year, the Swiss watch manufacturer and the league renewed its multi-year partnership. 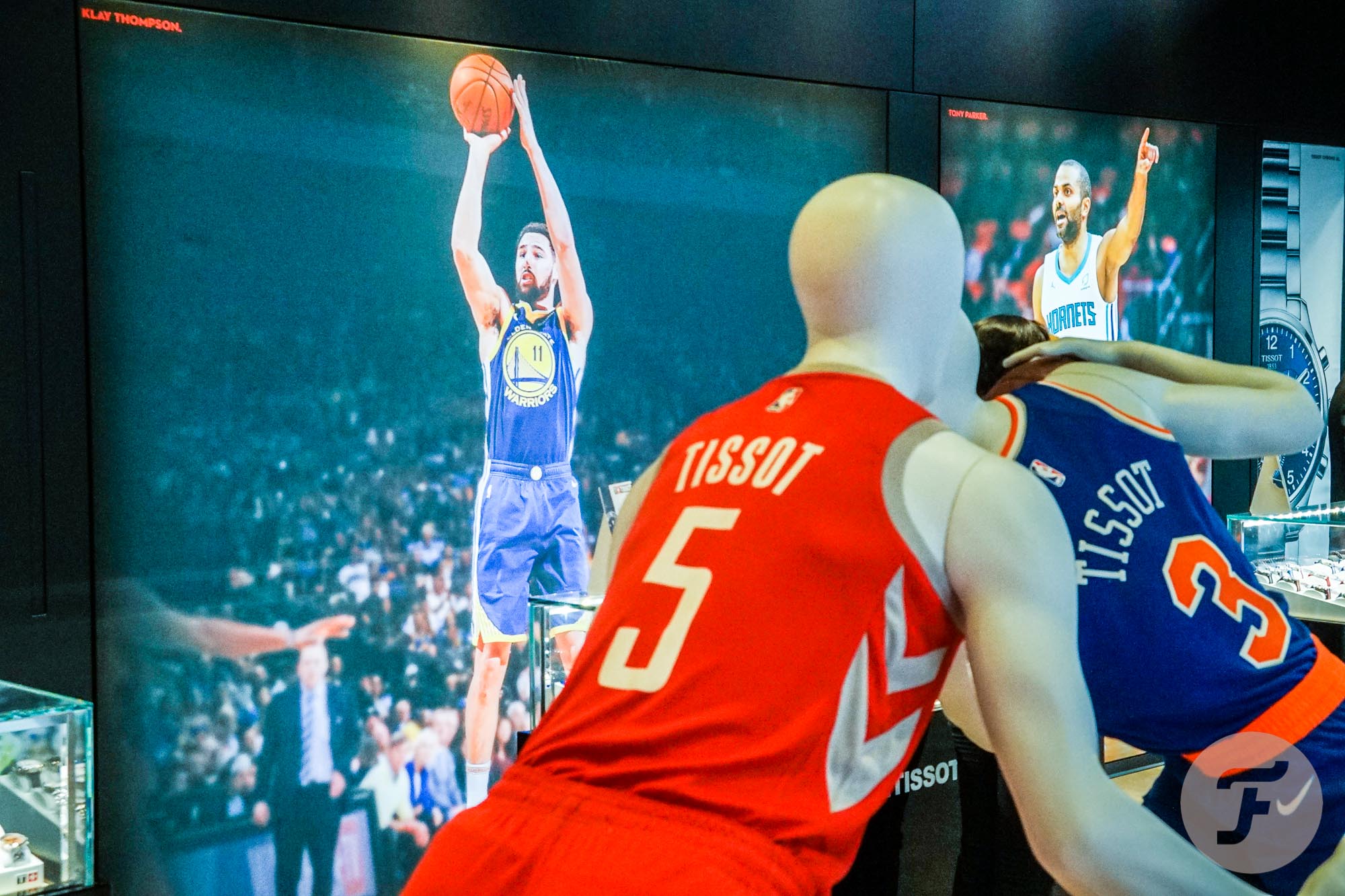 Tissot for the NBA

This means that Tissot will remain the timing partner for the NBA, WNBA, and the NBA G League for years to come. This partnership, however, is not the only one on the brand’s résumé. As a matter of fact, Tissot has been the partner of other illustrious sports events. Just think of the Tour de France, Giro, La Vuelta, MotoGP, IIHF Ice Hockey, and so on. The new Tissot NBA Strap Collection for the new SuperSport is here to celebrate the partnership between the NBA and Tissot and the basketball league’s 75th anniversary. 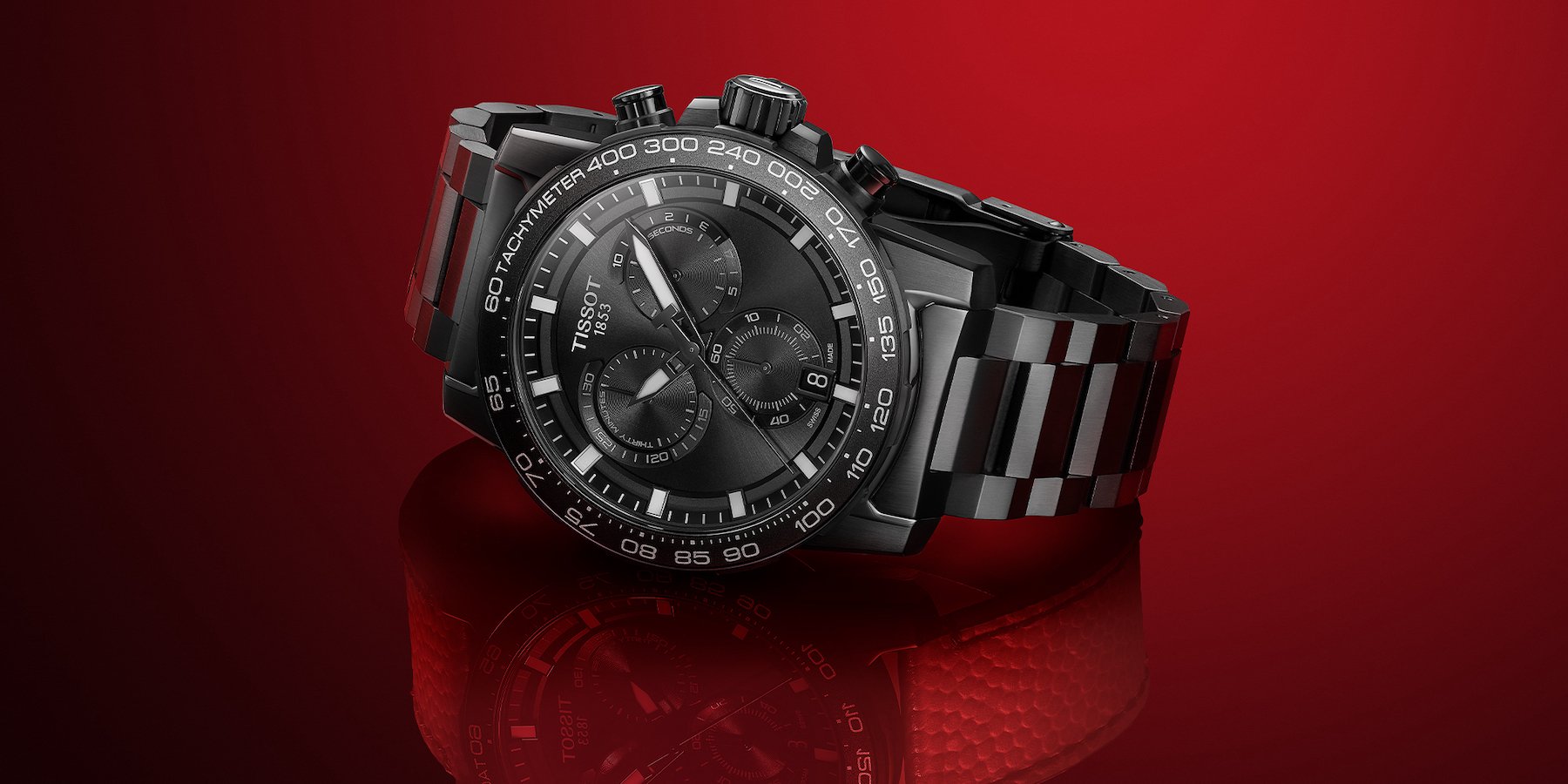 Tissot’s SuperSport collection is an existing lineup that just received three new versions this year. With that, it brings the number of various models to thirteen. Whether you are a fan of steel or PVD-coated models or prefer blue or silver dials, Tissot has something for you. However, the black SuperSport would work best with the new NBA straps thanks to the steel PVD-coated buckles. Its 45.5mm case makes the SuperSport a large watch, and it takes a 22mm strap. As expected from an actual sports model, it has 100m water resistance, a scratch-resistant sapphire crystal, and an aluminum tachymeter bezel. The SuperSport weighs 188 grams, but thanks to its quartz movement, it is no thicker than 11.9mm. Now, this new collection of team-inspired straps provides NBA fans the perfect way to accessorize. 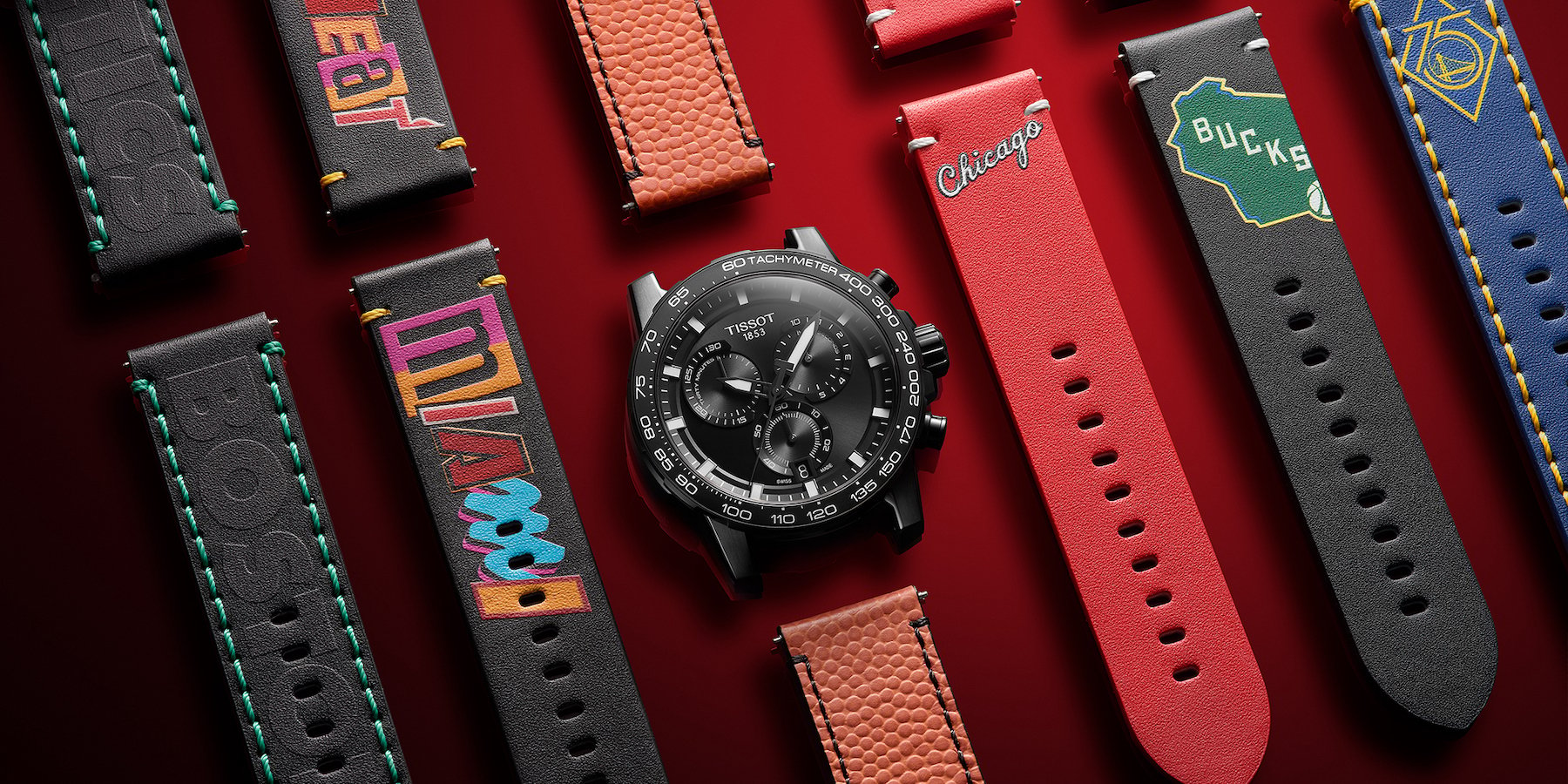 Yes, Tissot created two leather straps for eleven different teams. Amongst them, you have some of the most iconic NBA teams of the past decades — squads like the Los Angeles Lakers, Boston Celtics, Chicago Bulls, and the New York Knicks. Aside from them, you can find straps for the freshly crowned 2021/2022 NBA champions, the Golden State Warriors. Previous winners like the Miami Heat and the Toronto Raptors are also in the selection. Lastly, franchises such as the Dallas Mavericks, the Portland Trailblazers (home team of Tissot ambassador Damian Lillard), last year’s champs, the Milwaukee Bucks, and the Denver Nuggets are here as well. 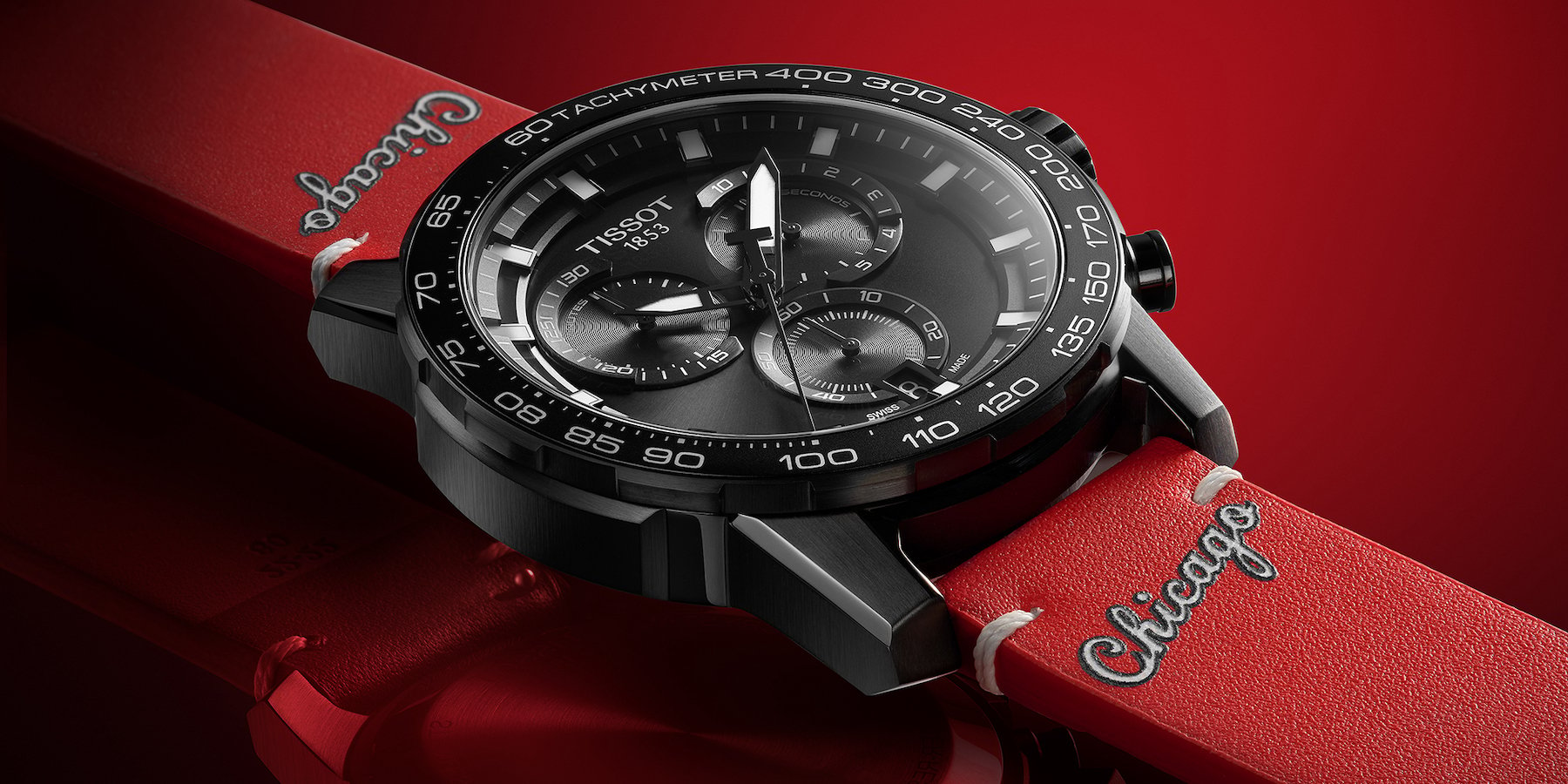 As I said, Tissot created two strap designs for each team. For the second limited-edition set, the designers took inspiration from the eleven teams’ Nike City Edition uniforms, mixing throwback and contemporary design. As a bonus, there is a 23rd strap. That one comes in the color of a Wilson basketball, the official ball of the NBA. The Wilson Edition strap is made of the same leather that Wilson uses to create the basketball. Is it a coincidence that the basketball-leather strap is the 23rd option and Wilson hails from Chicago? Got it? 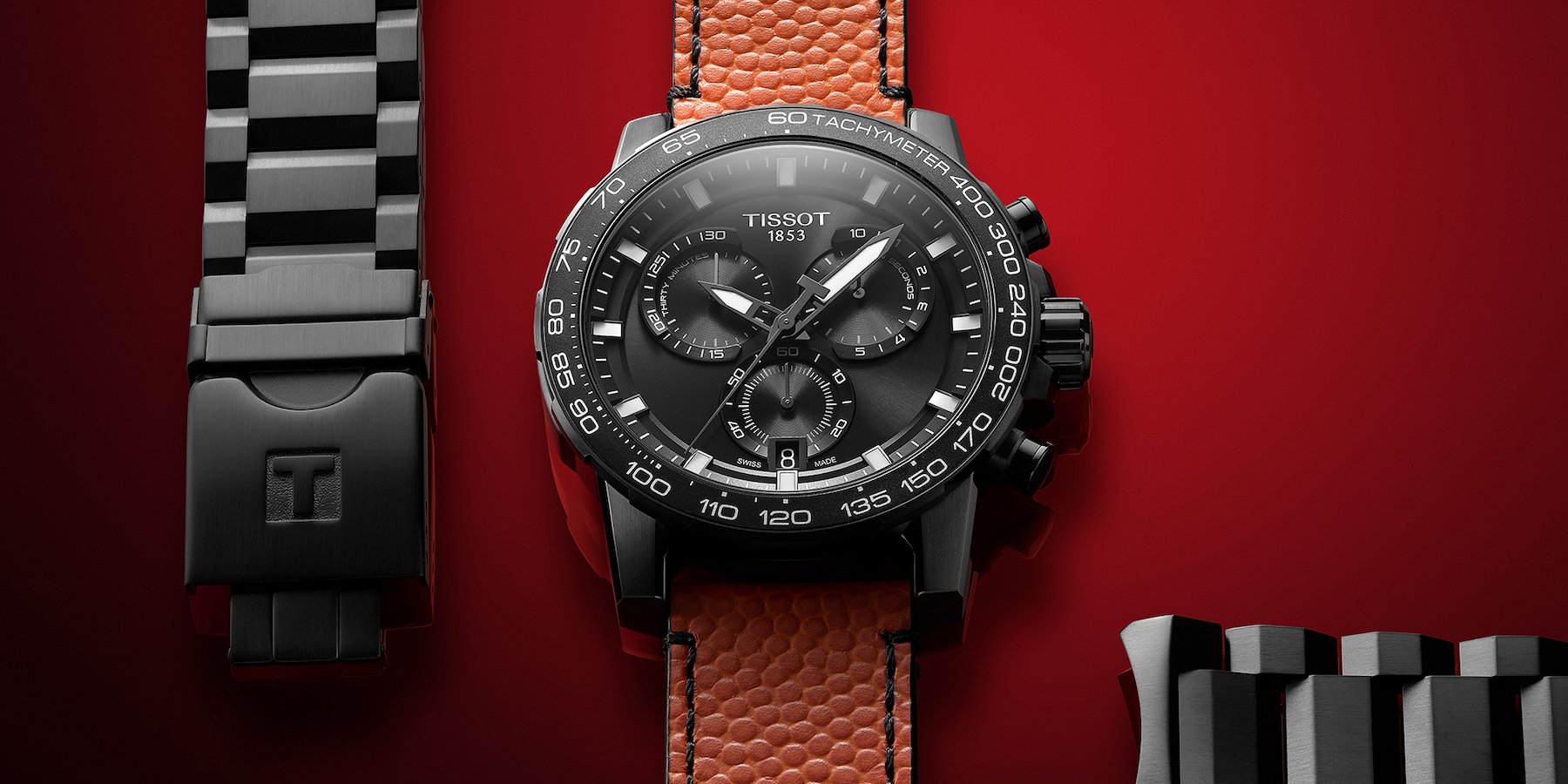 There you have it — 23 straps, two each for eleven different NBA teams and an extra one made of Wilson leather. As I mentioned, these straps are 22mm wide, and the length is pretty standard at 120/80mm. The leather is cowskin, and the lining is synthetic. Every strap comes with a steel PVD-coated buckle to match the look of the PVD Tissot SuperSport. Furthermore, the straps have built-in quick-release spring bars. You’ll be able to swap between your straps or the bracelet in no time. These straps are on sale now for €45 each.

As someone who loves straps and writes about them frequently, I’m excited about these babies, especially the 75th-anniversary limited editions. Maybe I should look at them in a special Watch Strap Review — NBA Editon? Let me know in the comments below if you’d like to see that. You can check out the straps as well as the SuperSport line of watches on the official Tissot website.