Taking The Tissot PRX Automatic Chronograph To The MotoGP Racetrack

A photo report from the famous Assen TT circuit, also known as the Cathedral of Speed
Lex & Nacho
comments 13
Share

I really do like watching the MotoGP races on television. But seeing those two-wheeled monsters and their riders taming them live is something else. So why not call up Tissot — the brand that is the official timekeeper of MotoGP since 2001 — and ask for two press tickets, one for Nacho and one for me? It was also the perfect opportunity to once again get our hands on the Tissot PRX Automatic Chronograph. And so we asked for two of those — one blue and one panda-dialed version — to accompany us to the Friday practice sessions of the 91st Assen TT. Here’s the live photo report from the famous, spectacular, and, at times, rainy Cathedral of Speed.

Did you know that Tissot has been producing official MotoGP watches since 2003? I didn’t know the year, but I did know the brand makes MotoGP-themed watches. They’re not really my cup of tea, but in motorcycle-crazy countries like Italy and Spain, these wild, big, and exuberant creations must resonate a little better. The watches, with their aggressive styling and bright colors, are a perfect match for the wild-looking MotoGP bikes. Still, Nacho — even though he’s Spanish and a fan of both Marc Márquez and Maverick Viñales — and I preferred wearing something a bit more stylish, introverted, and fashionable. What else but the hot new Tissot PRX Automatic Chronograph? Tissot said “yes” to all the questions, and so Nacho and I set off for Assen. 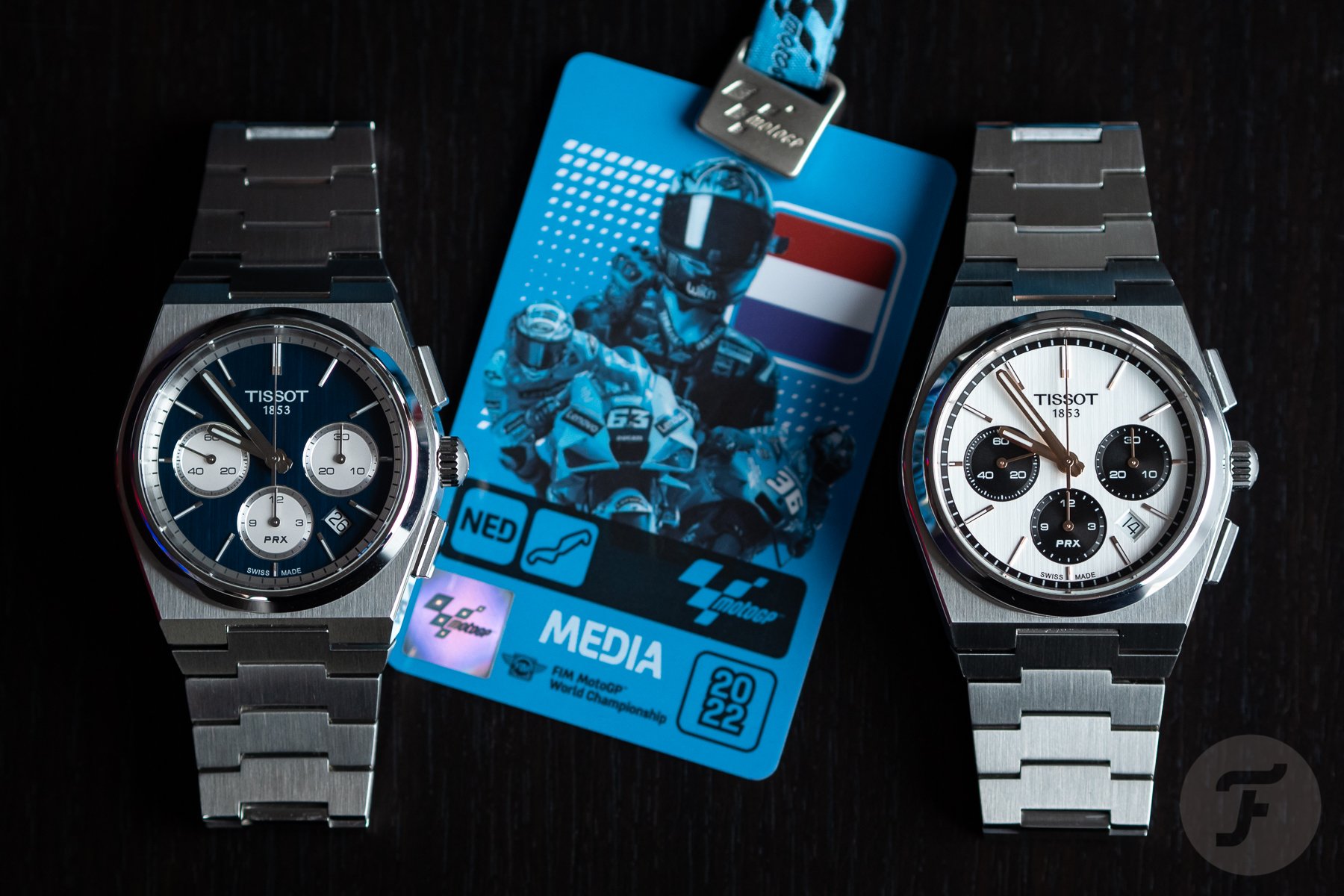 Taking the Tissot PRX Automatic Chronograph to the MotoGP racetrack

The 91st edition of the Assen TT started wet. And the weather forecast told us it was going to stay that way. It didn’t kill our spirit, though. As soon as we heard the grunting Moto3 bikes that had already started Free Practice 1 at 9:00 AM, we were ready to roar as well. There’s something about the sound of a race bike that gives me goosebumps. And when you see them speeding past the start/finish full throttle and then braking hard to make the first ninety-degree turn, you can’t feel anything but respect and admiration for the fearless riders that use all their skills and powers to execute it. They hide behind the fairing to be as aerodynamic as possible then sit up high to catch as much wind as possible while braking hard. Some even put out the right leg to make the bike turn correctly.

The lightest Moto3 bikes — 250cc single-cylinder engines made by Honda and KTM — make a deep, snoring-like sound. The 765cc three-cylinder, race-tuned Triumph engines in the Moto2 bikes are real howlers. But it’s the 1,000cc MotoGP engines that steal the show. Every brand — Aprilia, Ducati, Honda, KTM, Suzuki, and Yamaha — sounds different. The inline four-cylinder Yamaha power plant is loud, of course, but is also probably the most civilized of all engines in the field with its dark roar. The Italian V4 Ducati has a deep sound with a lot of range, while the Austrian V4 KTM is both the loudest and, with its high overtones, also the most painful when it streaks past full gas. 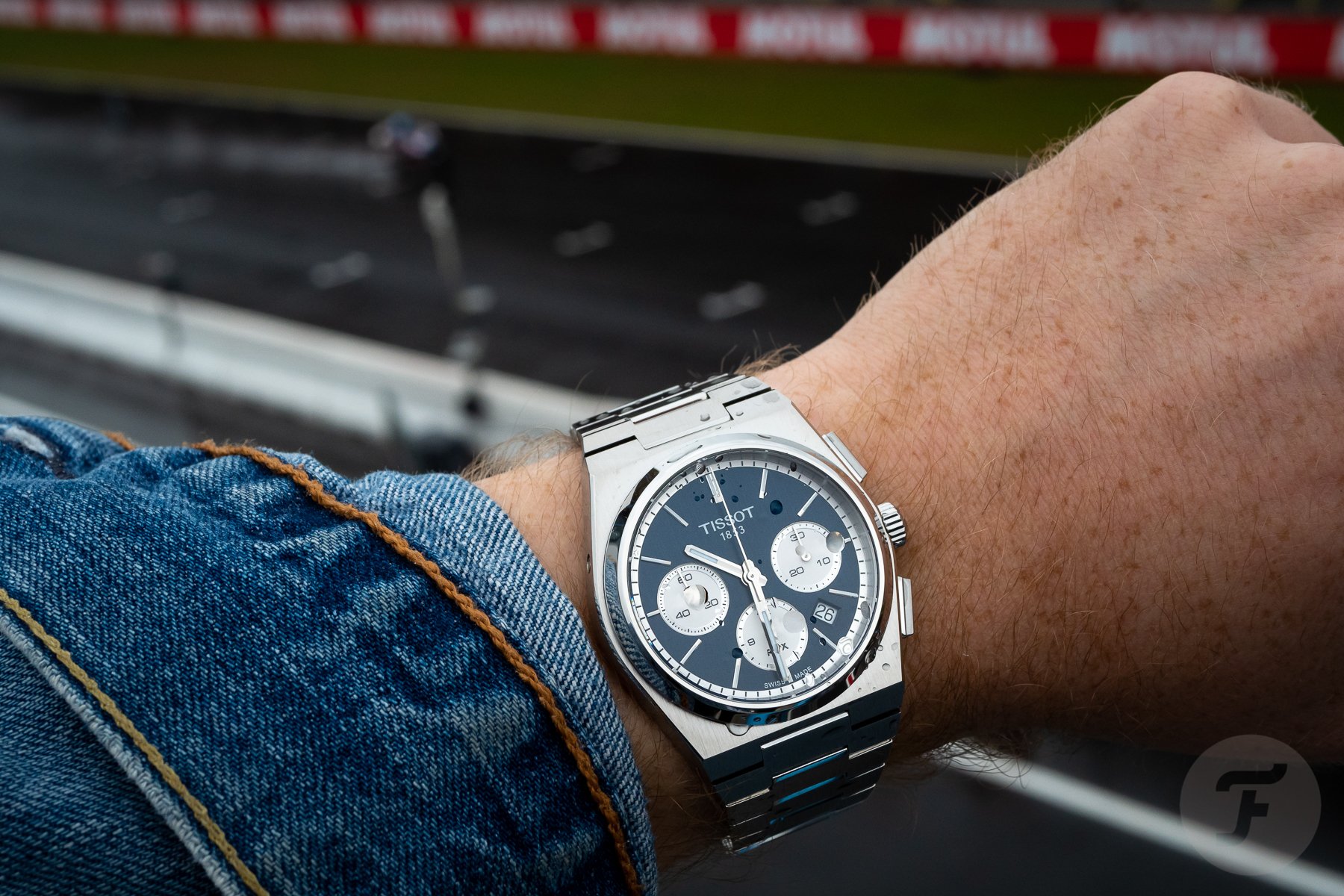 A MotoGP bike that accelerates as fast as it can — we watched the practice starts after Free Practice 2 from a couple of meters distance — is a symphony of mechanical and exhaust noises that begs for earplugs. But at the same time, you also want to feel and experience the vibrations, so you don’t want to block your ears. That’s not very sensible, I know, but there is not a lot of sensibility in the world of MotoGP anyway. That becomes very clear when a rider closes the throttle, downshifts, and puts on the brakes to slow down from 300km/h to 90km/h to make a turn. A cacophony of mechanical and engine sounds is the result. It’s exciting, hair-raising, dangerous, and violent — the brutal sound of a machine being pushed to its limits by a guy who is also pushing his physical and mental boundaries.

From zero to hero

While walking through the paddock, we were almost hit by VR46 rider Marco Bezzecchi on his electric moped. He smiled, though, and masterfully avoided a collision. He was a friendly young kid on his way to work. But when you see him at work, you understand that it takes someone very special to his job of pushing a 290+ horsepower Ducati MotoGP monster around the fast, twisty, and demanding TT circuit in the rain; they don’t call it the Cathedral of Speed for nothing. By the way, he wasn’t happy but quite grumpy indeed when he lost the bike in the slowest turn of the track and couldn’t get it to restart. But come Sunday afternoon, he was one of the happiest men on the planet. He only saw Ducati factory rider Francesco “Pecco” Bagnaia finish in front of him. And so the 23-year-old scored his first-ever MotoGP podium.

How did the two chronographs function, you ask? Well, both the blue (T137.427.11.041.00) and the panda (T137.427.11.011.00) PRX Chronographs performed flawlessly. Not that we really pushed the 42mm steel chronographs with 60-hour “engines” that hard, but I did time some laps, and it worked. Not to the thousands of a second like the official timekeeping equipment, but mine still managed to measure lap times of around 1 minute 33 seconds and a couple of tenths. That was during Free Practice 2 when the rain had stopped, the track had dried up, and slicks had replaced the rain tires. 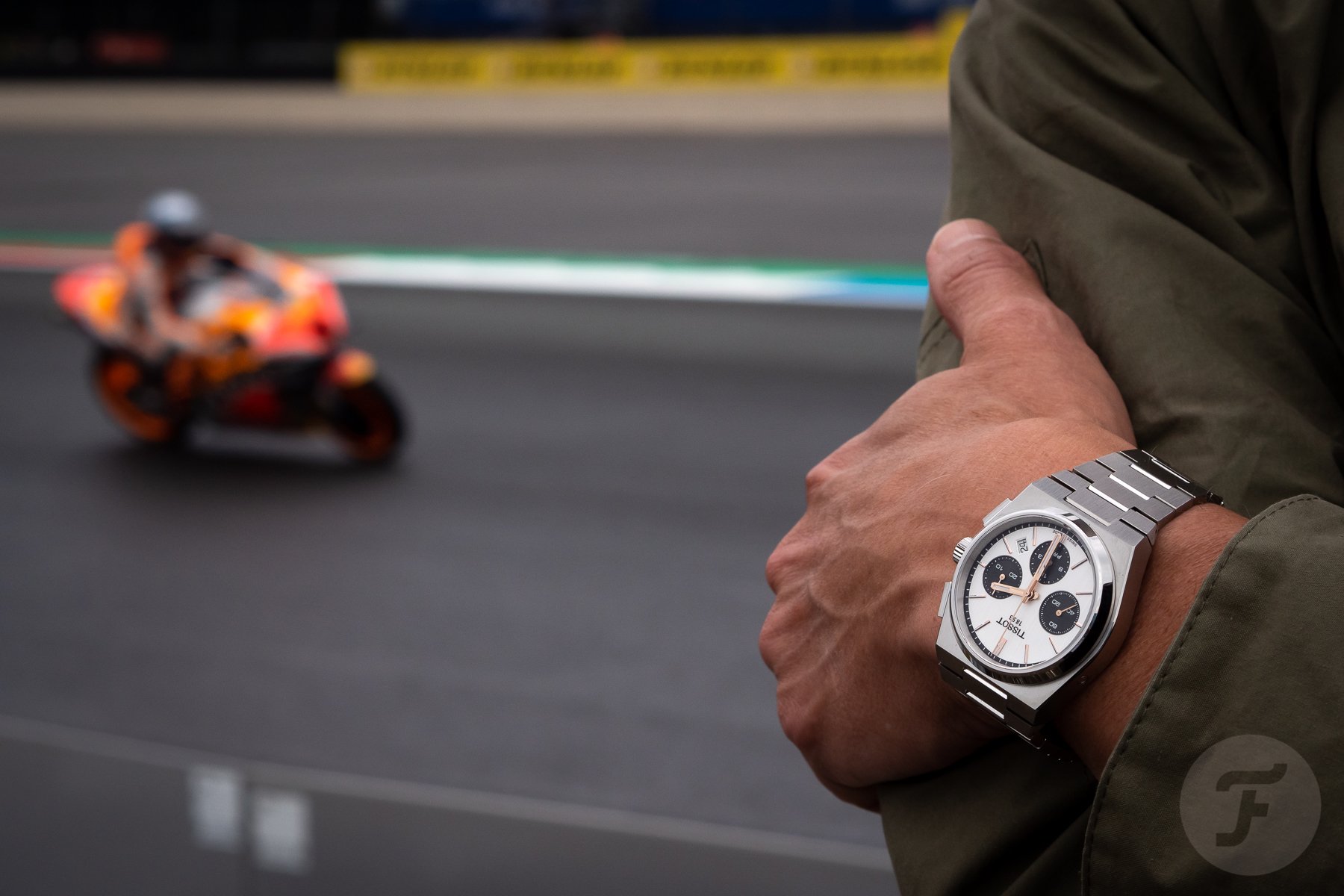 Anyway, we didn’t bring the two €1,795 retro-styled chronographs to function. Honestly, we brought them to look good. And looking good on the wrist trackside is what they did. The PRX Automatic Chronograph is, of course, incomparably more quiet than a race bike. Inside the watch, the mechanical ballet of wheels, gears, and cogs is performed in relative peace and quiet. The soft ticking is the complete opposite of the maniacal motorcycle engines that sound like they’re on the verge of disintegrating. Still, there are mechanical principles that a mechanical movement and a racing engine have in common.

Did Nacho and I think about that when we were trackside? Not really. We had an adrenaline rush that lasted a couple of hours thanks to the bikes, the riders, and the show they put on. And we really enjoyed the watches too. In a more introverted way, sure, but we’re still watch nerds.

If you want to read a bit more in-depth about the PRX Automatic Chronograph — and I can imagine you would — please check out RJ’s hands-on review. And for more info about the availability of the sportiest of new PRXs so far, please go to Tissot’s official website.