Hands-On: The New Tissot PRX Chronograph — The Watch I Just Had To Order Before It Came Out

Meet the Tissot PRX Chronograph. It has been a long time since I ordered a watch during the initial presentation to the press from a brand. But alas, that’s exactly what happened with this. And it was a digital presentation, even!

I thoroughly enjoyed wearing the regular Tissot PRX Automatic. Besides having a vintage-inspired design from a wonderful decade, the price for that watch is also on point. I can’t think of another watch between €500 and €1,000 that I’d rather buy at the moment. But now, there’s the Tissot PRX Chronograph, a new addition to the PRX family at a slightly higher price point. 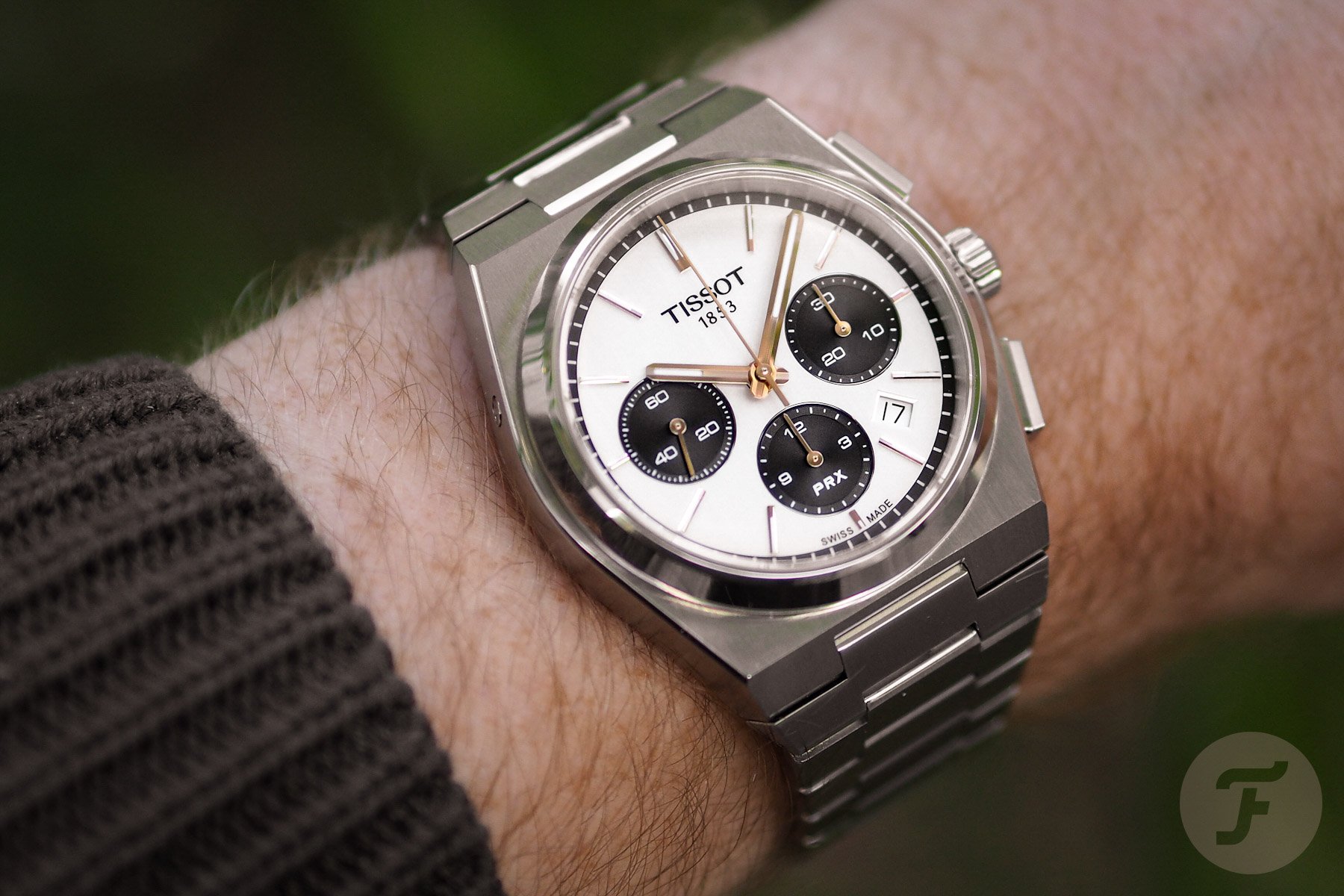 The first thing you’ll notice after unboxing this Tissot PRX Chronograph is the weight of the watch. A whopping 184g, compared to the 138g PRX Auto, the difference is definitely noticeable. But I do like a watch with a bit of heft, and I am an avid wearer of the 280g Seamaster PloProf 1200M. And while I am at it anyway, let’s talk dimensions. There was some confusion when, according to the brand’s own spec sheet, Tissot communicated that the diameter is 42mm while the lug-to-lug is supposedly just 41.5mm. So let’s get that cleared up. The case diameter, measured across the watch from 2 o’clock to 8 o’clock, is 42mm. The bezel diameter measures 39mm.

Now, Tissot measured 41.5mm from lug to lug, but that’s just where the flat surface ends, and not where the lugs themselves end. The real lug-to-lug measurement is 46.5mm. The thickness of the watch is 14.54mm. All in all, this is a heavy and relatively large watch. Keep that in mind when you’re ordering it online (or unseen). 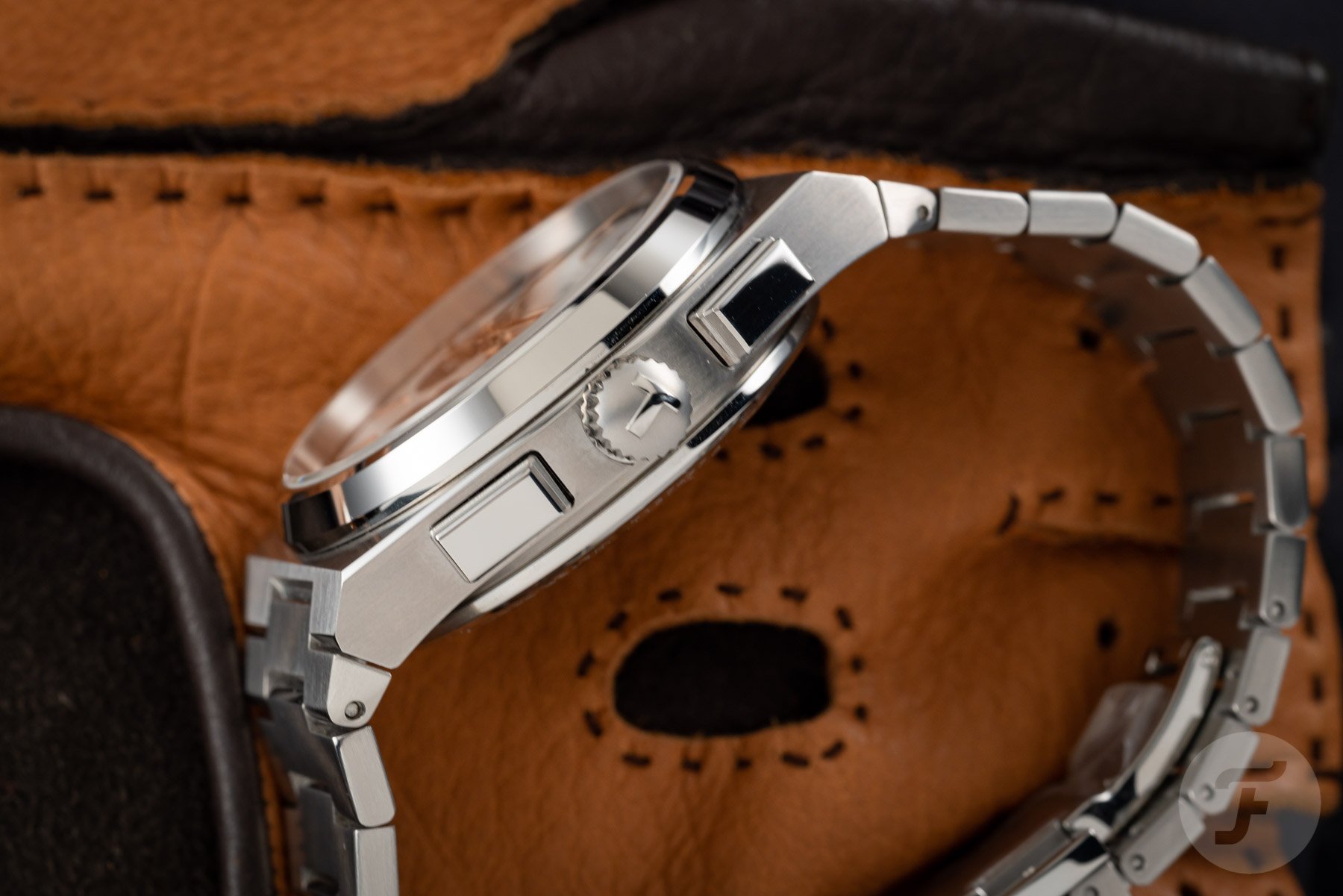 The design of the PRX reminds me of my old 36mm Rolex OysterQuartz, but it indeed wears bigger. Although some might think the Tissot PRX design isn’t very original, or even that it’s copied, it actually isn’t. The PRX has been based on the Tissot Seastar Quartz, which was later renamed PRX. There wasn’t a chronograph version though, so that’s new to the PRX design. Besides bulkier dimensions, there are now, of course, also two rectangular-shaped chronograph pushers on the right side of the case. 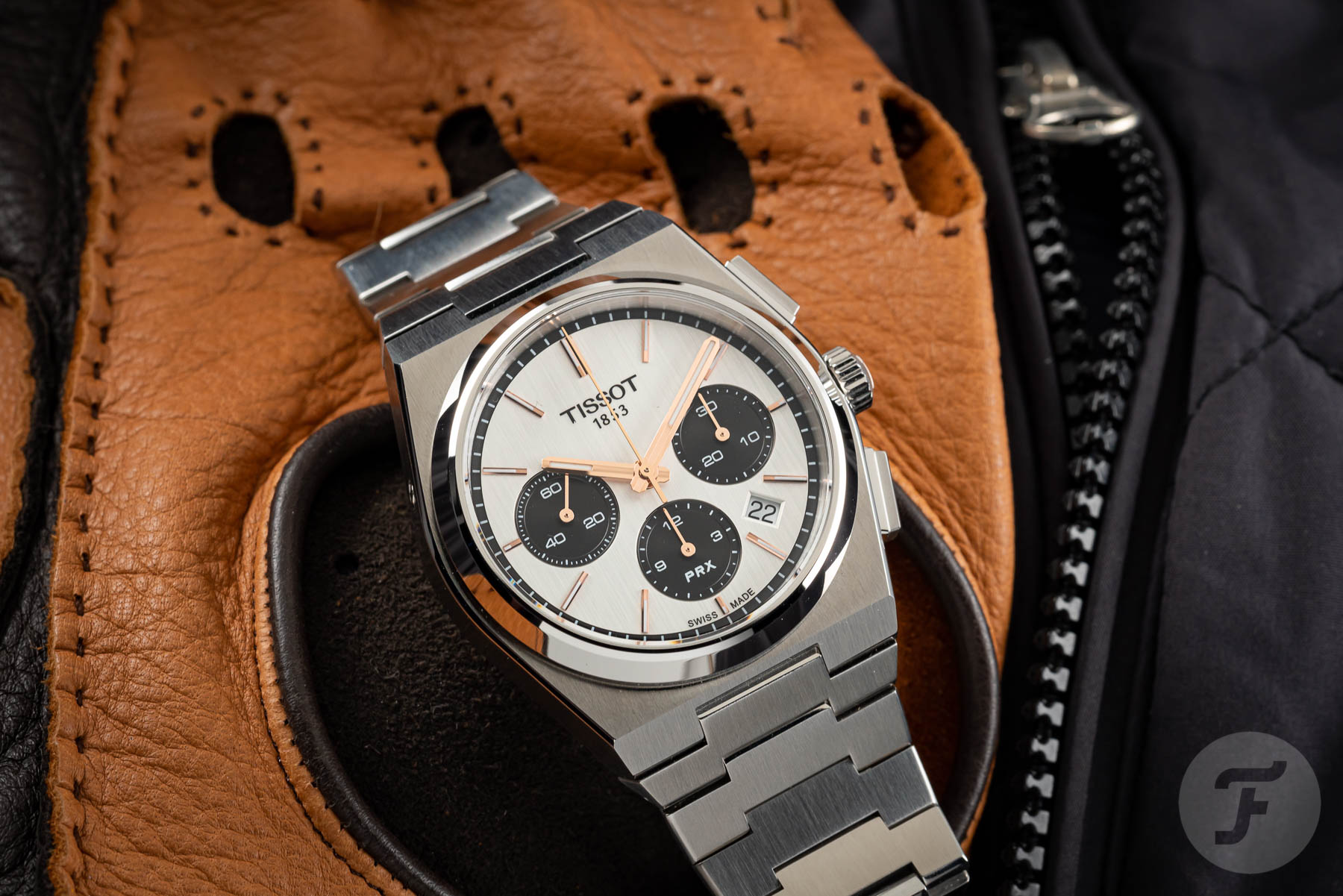 Tissot’s PRX Chronograph comes in two flavors — a blue-dialed reverse-panda version, as well as this silver-dialed panda version with rose gold PVD hour markers and hands. This is the version I personally ordered, though there’s nothing wrong with the blue-dialed version either. I like both, but the rose gold accents drew me to ordering this version. The reference number for the silver-dialed panda PRX Chronograph is T137.427.11.011.00, while the blue-dialed version has reference T137.427.11.041.00. There’s no difference in specifications or price. Both have a retail price of CHF 1,600 (or €1,495). 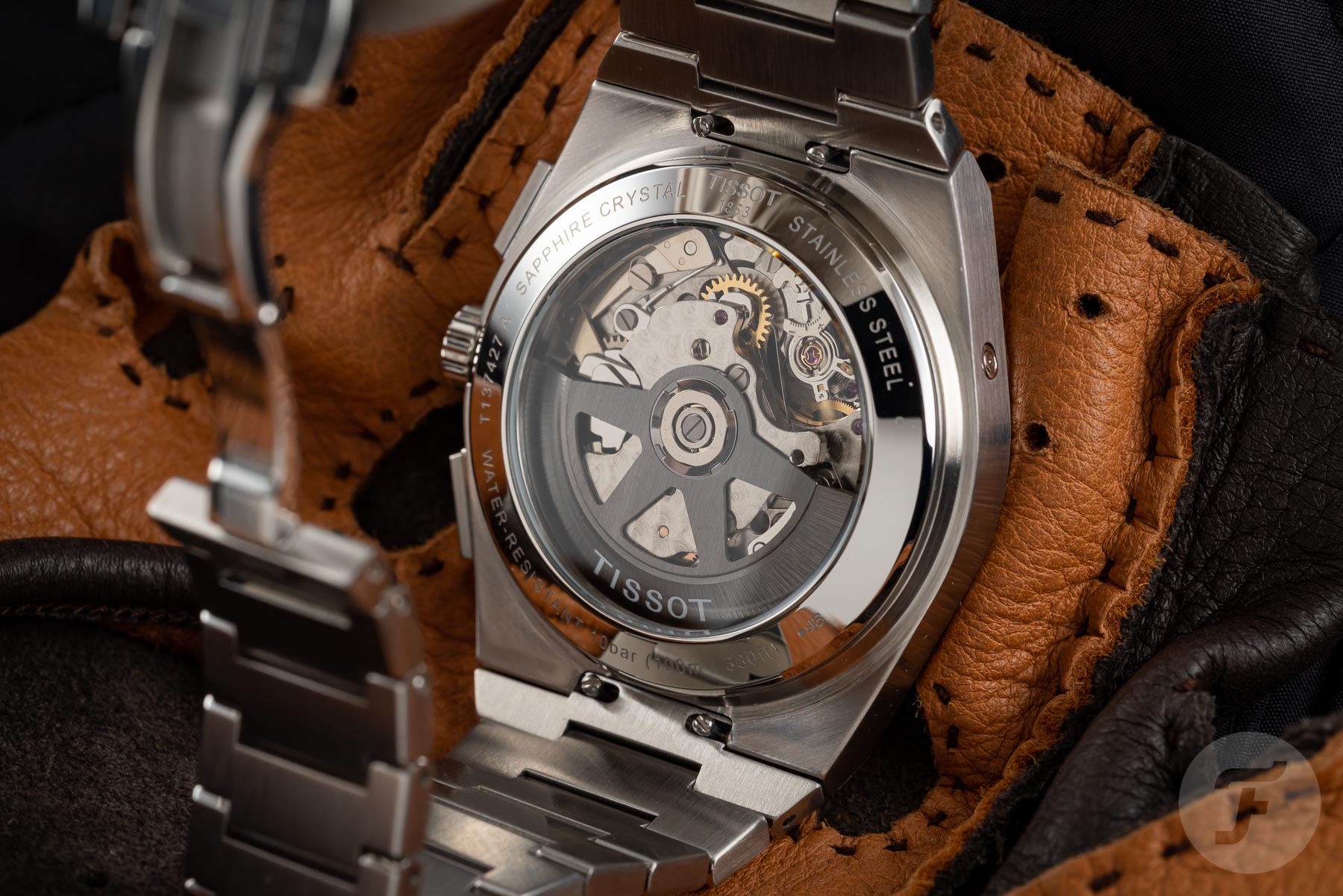 Inside is the ETA A05.H31 movement, which is basically a new version of the Valjoux 7753. It ticks at 28,800vph and has a power reserve of 60 hours. This movement has a layout with sub-counters at 3, 6, and 9 o’clock, as well as a date aperture at four-thirty. I’ve noticed that the date window has upset a few people. Normally, I fully agree and dislike date windows. But if there has to be a date, I prefer it at four-thirty so it doesn’t mess up any of the hour markers. Tissot also made it look nice by adding a little bevel, instead of just simply cutting out a chunk of the dial (looking at you, Omega Seamaster Aqua Terra 38). 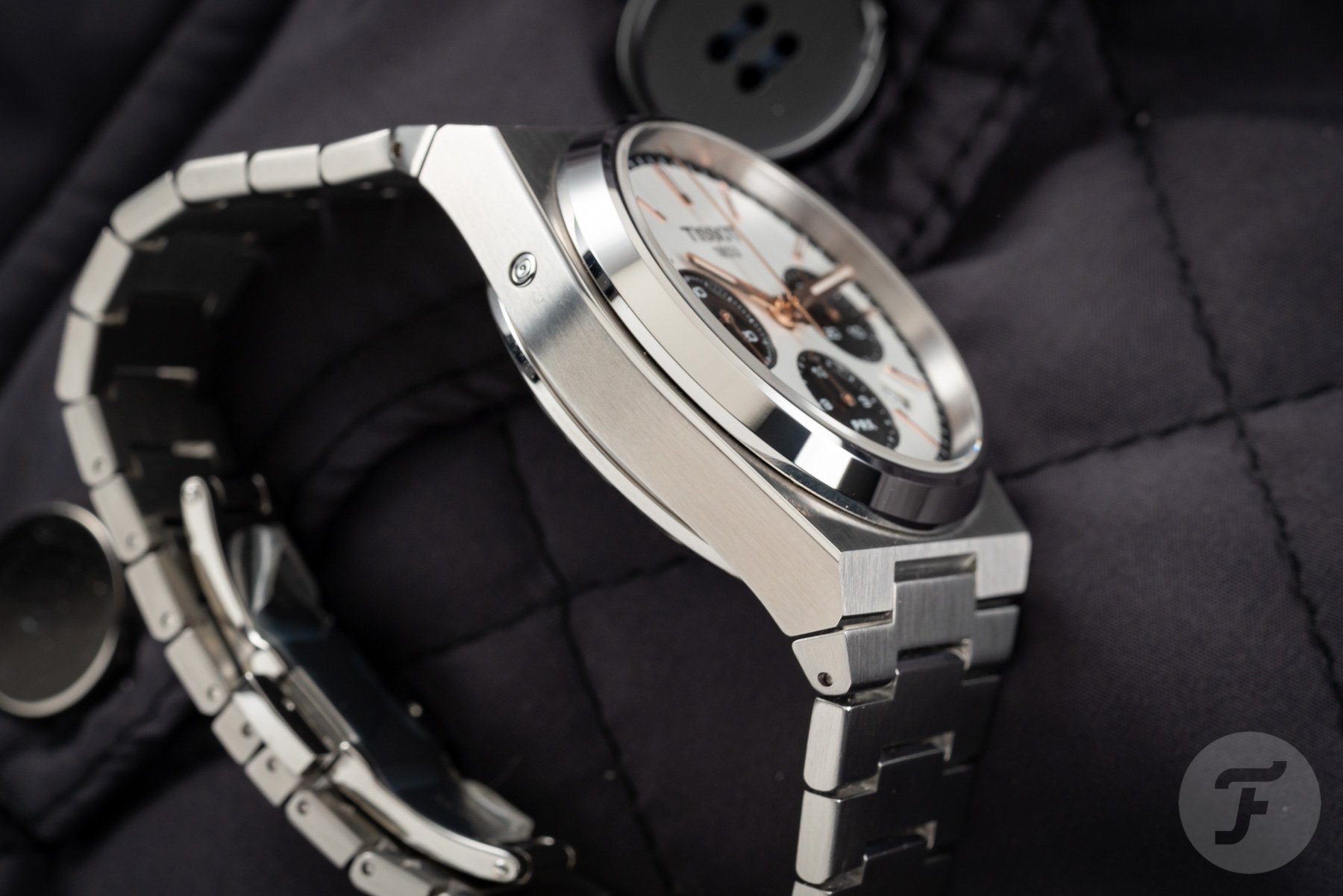 What I don’t like about this movement is that it requires a micro-pusher in the case band at 10 o’clock to adjust the date. The Tissot PRX Chronograph has a see-through case back, showing you the Valjoux-7753-based movement. There’s a perlage finish on the bridges and a custom black Tissot winding rotor. Just like all these automatic 775x-based movements, it only winds the mainspring when rotating in one direction. Turning in the other direction results in a free spin, causing the famous Valjoux wobble. 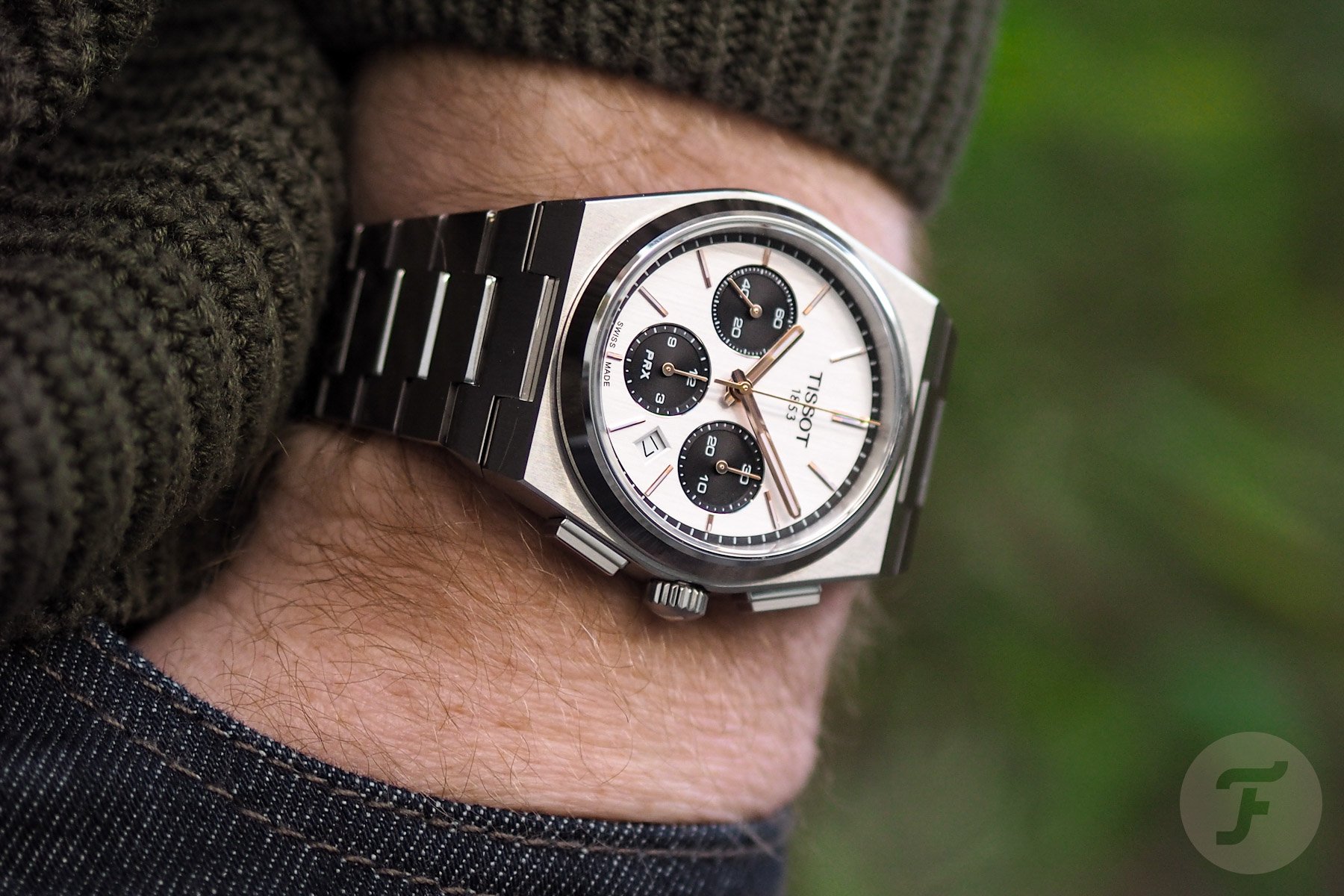 The dial of the Tissot PRX Chronograph has a very nice vertically brushed finish, and the sub-dials have a little rim with circular graining. In the sub-dial at 6 o’clock, the PRX logo has been printed. As I wrote above, I like the rose gold PVD indexes and hands, as they give such a nice contrast to the otherwise monochromatic theme. The outer minute track on the dial is black, matching the color of the sub-dials. Altogether, it’s a very legible chronograph dial, in my opinion. 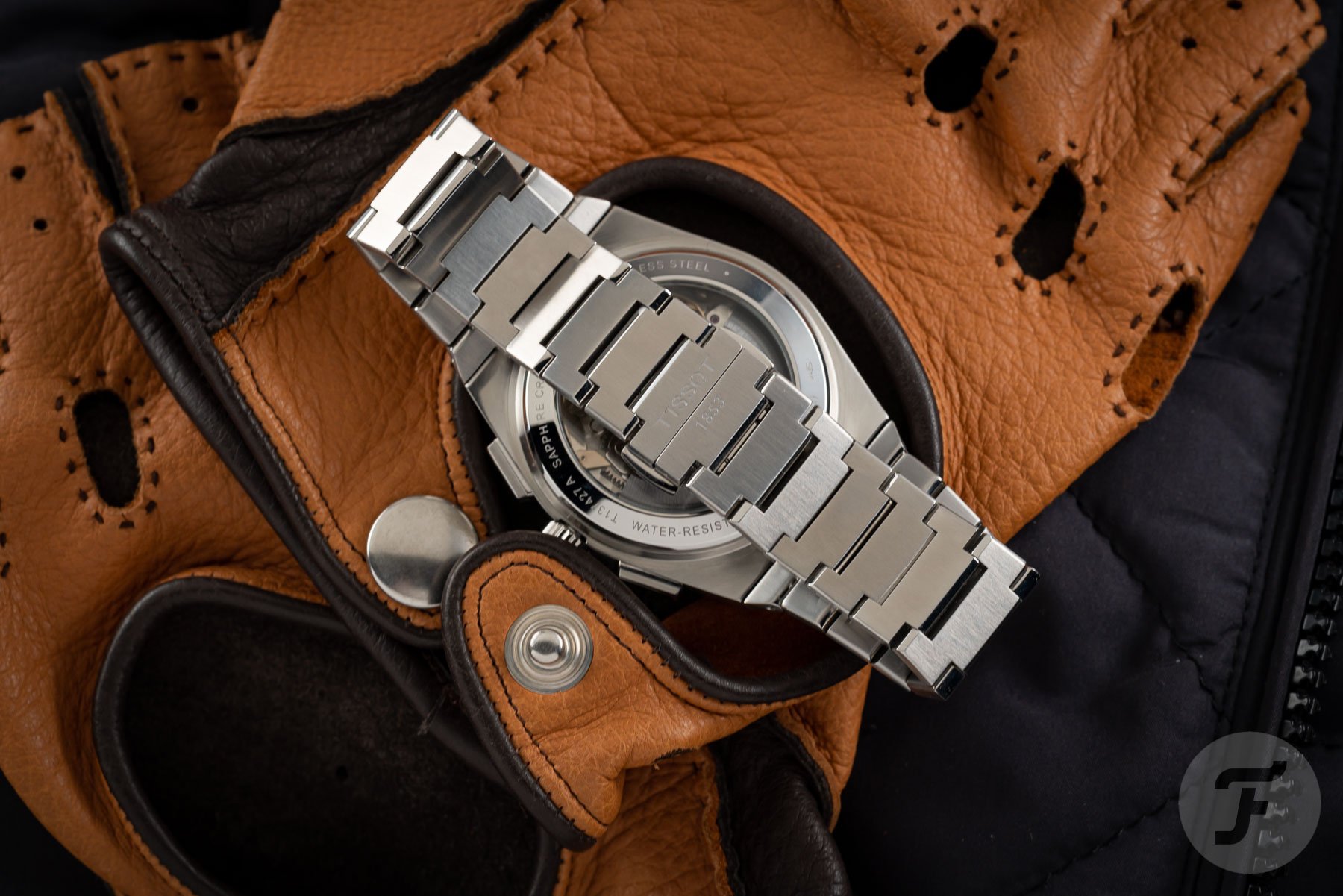 The bracelet on the Tissot PRX Chronograph is integrated with the case, connecting with a 13mm-wide end-piece at the lugs. On the backside, you will find these two small metal pins, which you must push inwards to remove the bracelet. I’m not sure what you want to do with it then, but I guess you could, at some point, add a leather strap that is specially made for this watch. However, the Tissot PRX Chronograph looks great on the bracelet, and I feel a design like this loses its “integrated-ness” when you put it on a leather or rubber strap. There’s a butterfly clasp with two release buttons. The bracelet has no micro-adjustment, but you can work with half links to resize it to your wrist. 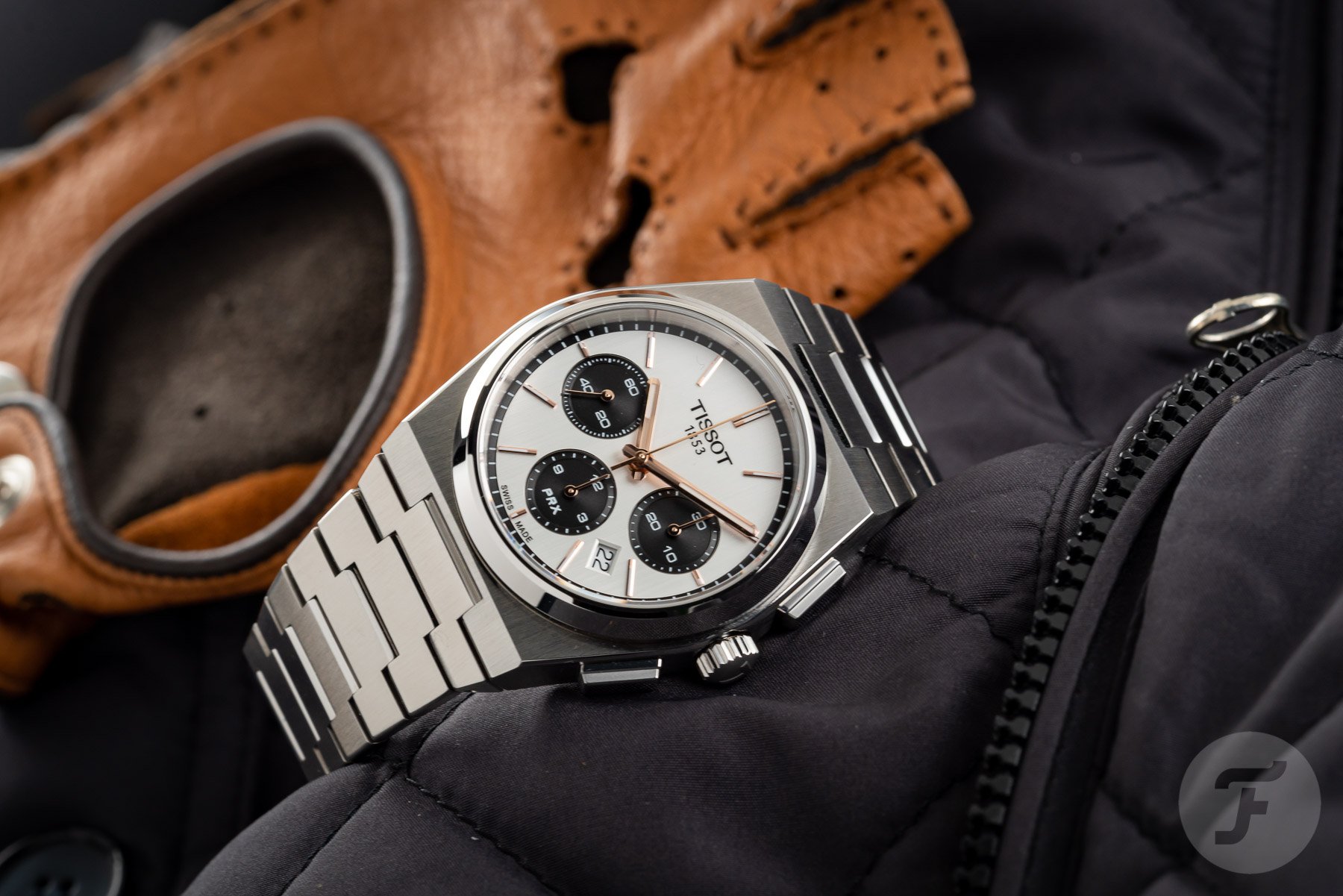 If you like these sports watches with integrated bracelets, there’s little not to like about the Tissot PRX Chronograph. Especially at this price point (CHF 1,600), there’s not much I can criticize. All the changes that Tissot would have to make to make it slimmer, for example, would add quite a bit to the price. That said, I don’t mind the 14.54mm-thick case, as it sits nicely on my 19cm wrist and has a sporty look to it. There’s no screw-down crown (or pushers), but Tissot guarantees a water resistance of 100 meters. So there’s no need to take off your watch when you want to have a swim.

Is there anything I don’t like? Well, there’s the micro-pusher at 10 o’clock, and there’s the large “Tissot 1853” on the dial. I think the logo could have been printed a font size or two smaller. I also realize I miss the old Tissot logo — the “T” in a square — a little bit. In the end, though, there are no dealbreakers whatsoever, and I’m looking forward to wearing my own Tissot PRX Chronograph when it arrives. It’s a cool sports watch with a bit of that 1970s vibe — what a great decade!

Check out the Tissot website to see the rest of the brand’s lineup, and let us know what you think of the PRX Chronograph in the comments.

Hot Topics
Introducing: The Omega Speedmaster Super Racing With Spirate System
165 comments
Design Vs. Specs — Which Is More Important To You When Buying A Watch?
86 comments
My Predictions For New Omega Speedmasters In 2023
54 comments
The Time To Buy Is Now: How The Current Economic Climate Influences Watch Buying And How You Should React
51 comments
A Regret-Free Guide To Buying Your First Luxury Watch — Part Three: Higher-End Options From Omega, Rolex, Grand Seiko, And More
48 comments
Popular
Rolex GMT-Master History And Overview Of All Major References
Robert-Jan Broer
21
Two Patek Philippe Nautilus Watches: 3700/1A Versus 5711/1A
Robert-Jan Broer
16
#TBT A Vintage Seiko Buyer’s Guide to Affordable Goodness
Michael Stockton
32