I think anyone who’s ever heard of Tom Hanks and is a fan of his work has seen Saving Private Ryan (1998). You can say whatever about to movie, but one thing is for certain; it has a strong opening scene. Steven Spielberg, the director, wanted realistic interpretation and he went the extra mile to achieve it.  They shot this roughly 20-minutes scene in a course of 4 weeks. Hundreds of extras came to the set. The crew even had original vehicles that were used on that actual day in 1944. The historical event I’m talking about is, of course, the Normandy Landings also known as D-Day. This operation, that happened on the 6th June 1944, was a complex one involving not only naval but airborne operations led by a Douglas C-47 Skytrain known as “That’s All Brother”. Thanks to Tockr, you can own a piece of (its) history. 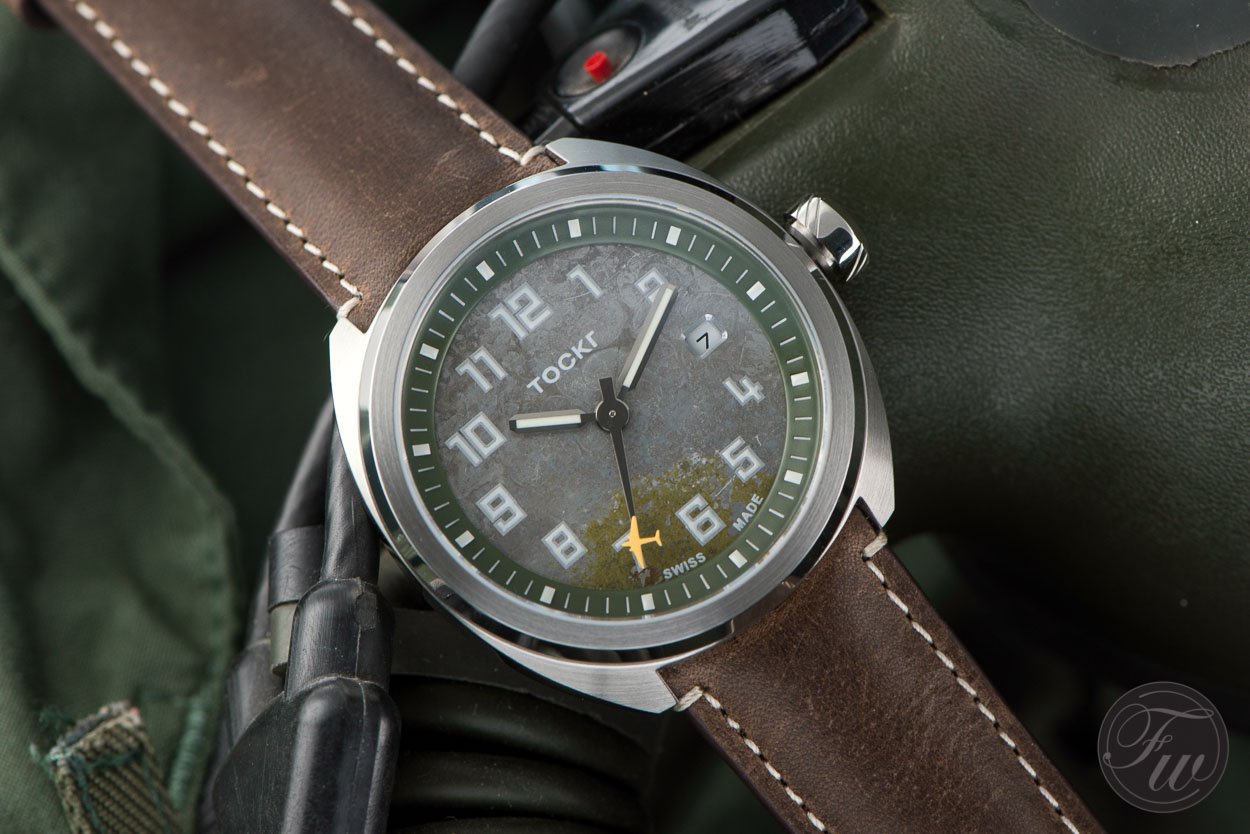 Tockr, an up and coming young micro brand from Austin (Texas) already has a model family by the name of C-47. Aviation has a heavy influence on Tockr so this is no coincidence. One of the brand’s founders, Austin Ivey has close ties to flying. His grandfather flew a C-47 during World War II, hence the connection and the name. Another C-47, the aforementioned “That’s All Brother” plane spends his retirement days at the airbase of Commemorative Air Force these days. 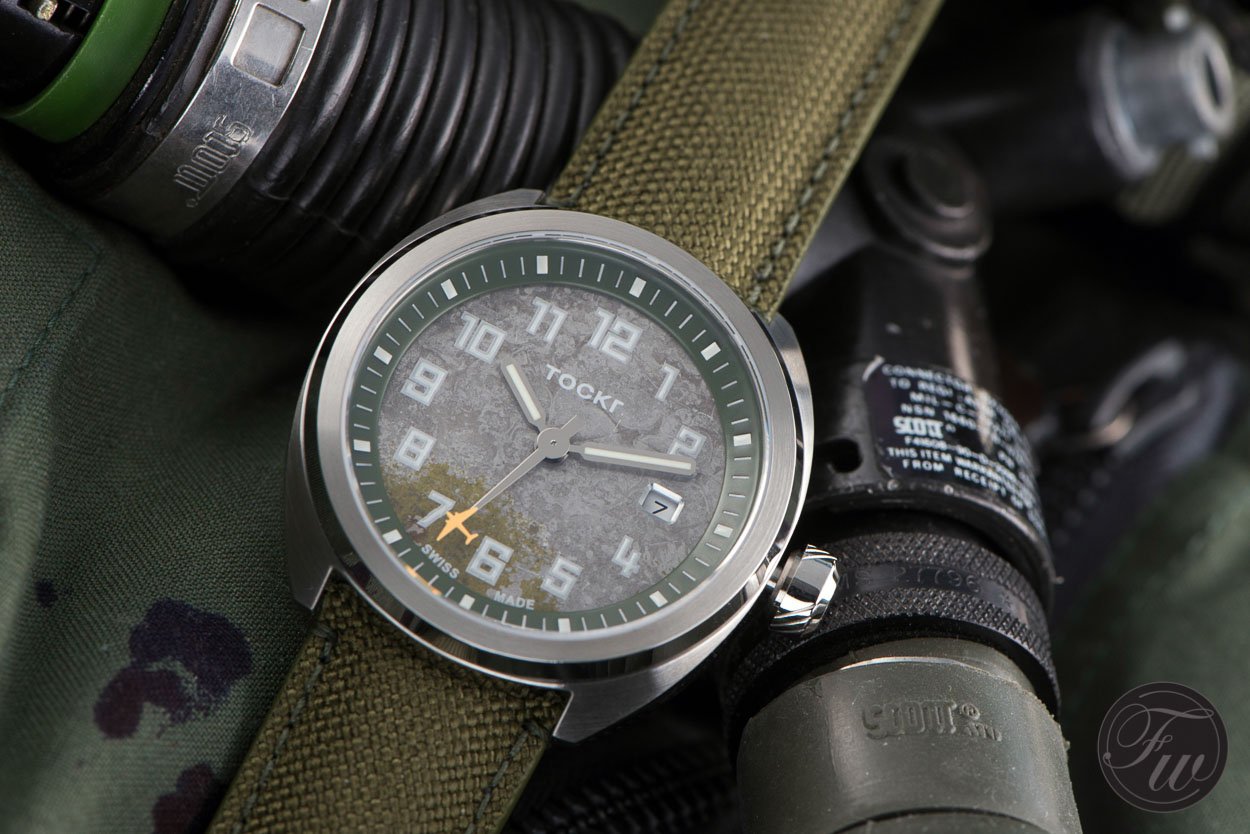 Their project, launched in 2015, is to restore the aircraft. After that, they’d like to fly it over the ocean back to France to its former place of duty. 6th June 2019 will mark with 75th anniversary of the Normandy Landings. Commemorative Air Force’s plan is to finish the plane by then. Tockr chimed in and teamed up with CAF for this great cause. 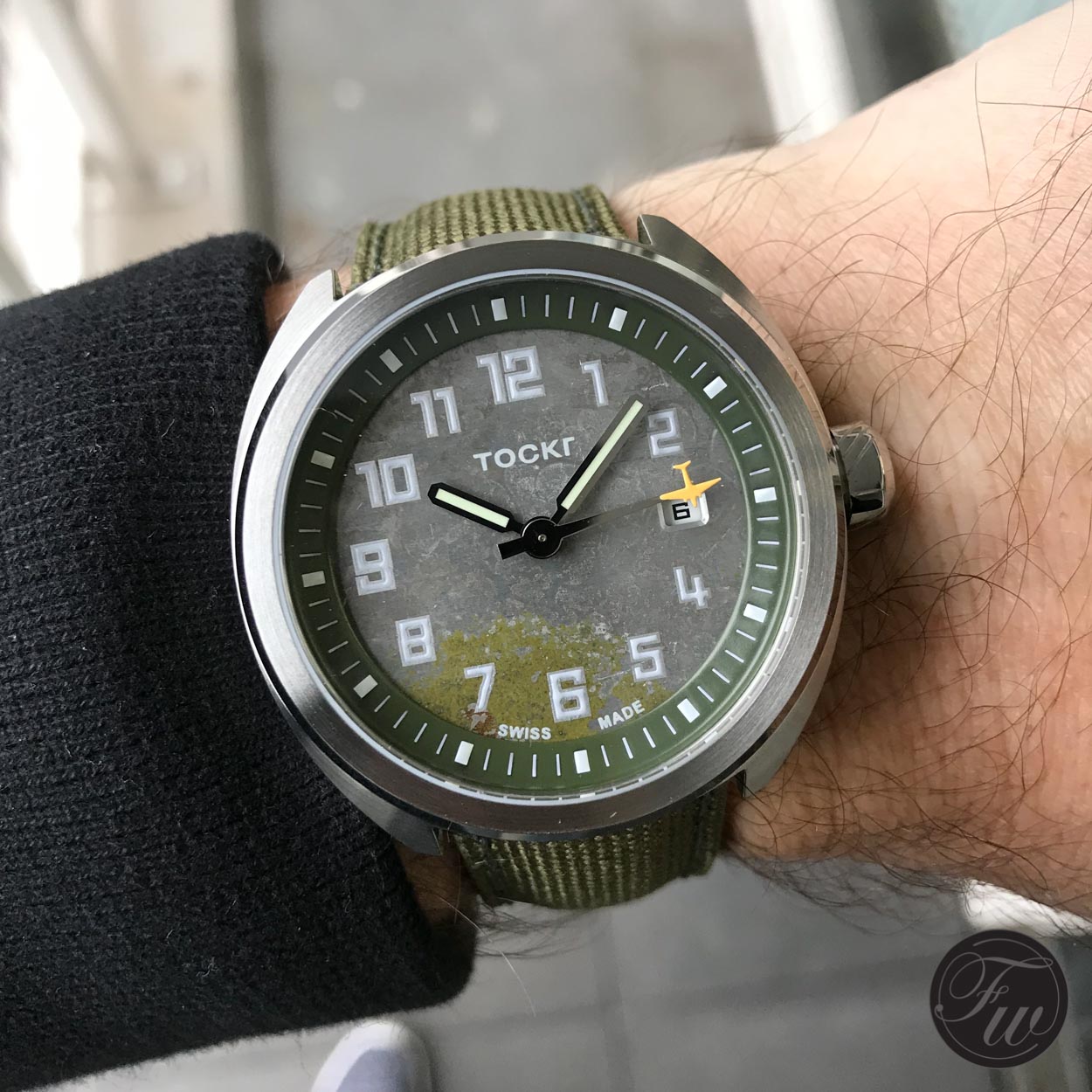 As the brand puts it “Tockr and The Commemorative Air Force (CAF) have teamed up to create a series of watches made with rescued material from a historic C-47 known as That’s All, Brother, that lead the D-Day invasion. These limited-edition watches preserve vital history under each dial and contribute to CAF’s mission to fully restore the airplane to its original 1944 configuration.” 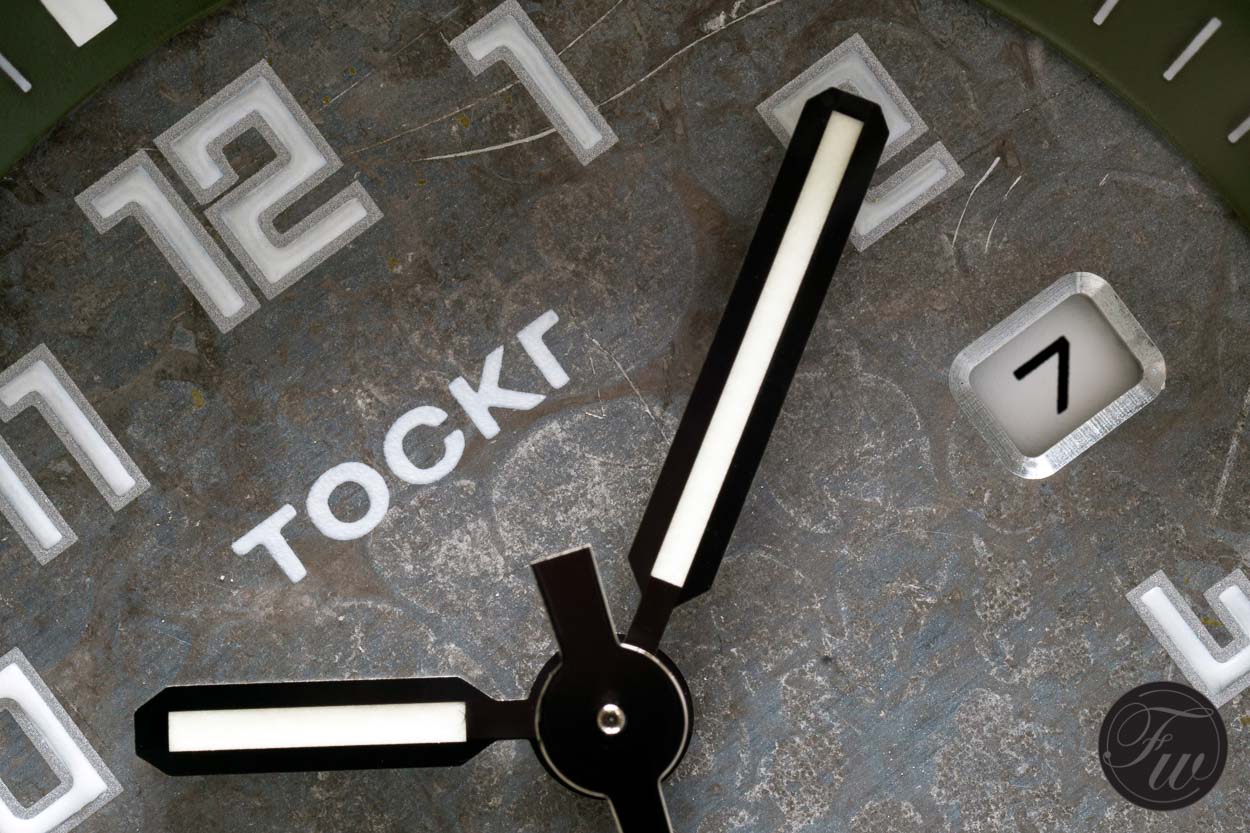 What this basically means is that CAF provided Tockr with damaged parts of the aluminium exterior cover of the plane that needed to be replaced. Tockr then used these sheets of metal to create the dials of the D-Day C-47 models. Since these are the actual parts of the plane, there are no 2 identical dials in this lot. All of them are unique and numbered pieces, one out of 100 watches altogether. While Tockr hails from Texas the watches are all Swiss Made. 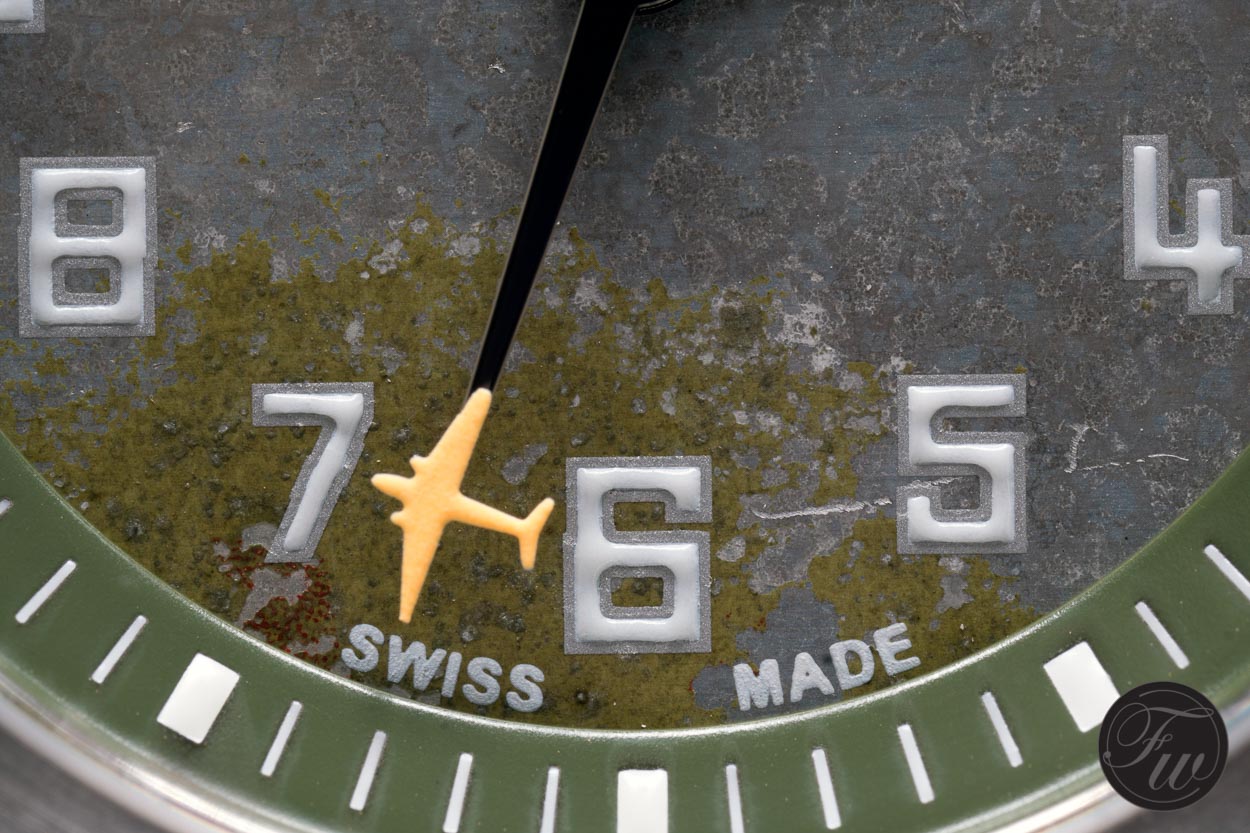 The watch we are talking about is based on Tockr’s existing C-47 Radial line. The similarity, however, ends at the shape (cushion) and size (42mm) of the case. While the regular production C-47 Radial has a radial engine design dial, the D-Day C-47 bears the aforementioned special dial from “That’s All Brother” Douglas C-47’s exterior cover. The watch’s design comes from renowned watch designer Emmanuel Gueit, who is responsible for such timepieces as the Audemars Piguet Royal Oak Offshore and most recently the new (or rather resurrected) Ikepods. While the front is clean and open putting the special dial to the forefront the back has a number of details. First of all, it features the “That’s All Brother” nose art from the front of the plane, in the center of the back. It also has the logo of CAF and the limited-edition number. 4 screws hold the back in place. 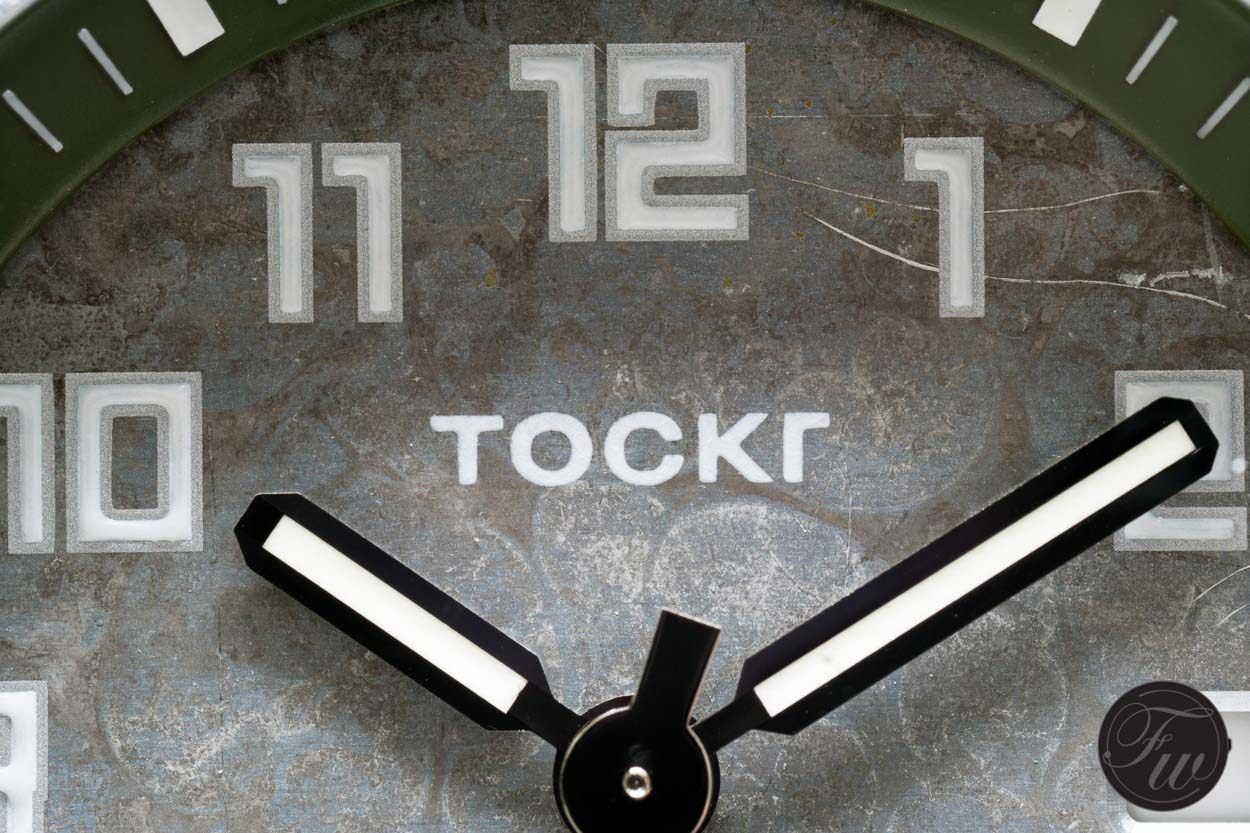 Around the logos, you’d have the usual info such as; water resistance (50m), original of the watch (“Born in Austin TX” and “Swiss Made”) and the reference of the watch (C47C) with the movement identification being “automatic”. This refers to the caliber inside the Tockr D-Day C-47, ETA’s 2824-A6. This is a self-winding, 25-Jewel watch with 40 hours of power reserve, 28.800 Vph and a date at 3 o’clock. Anti-reflective sapphire crystal domes over the D-Day C-47’s dial to protect the small piece of history turned the dial. 2 straps come with the watch; a leather strap and another one made of drab canvas for the military look. Each and every timepiece has a certificate of authenticity signed by the CAF verifying that the part the watch contains is actually coming from the “That’s All Brother” Douglas C-47 aircraft.

To be blunt, these editions never really had added value to me. I understand the historical significance, also find it great to “recycle” parts of something so significant like this C47. Personally, I’m just not interested in them as much as let’s say, a watch that was on board of that plane. That’s just me. The D-Day C-47 actually looks good, I like the fact that each example is different.The one small detail that bothers me though is the font on the dial that looks a bit Cyrillic. Otherwise, the Tockr D-Day C-47 is a great military-style timepiece. The brand’s attention to details is wonderful, the watch-box is awesome. For the avid USAF fans or the ones who’d like to pay tribute and support a good cause, this is definitely a watch to consider. It is available since November 2018 for $1.990 (around €1.750 or so) on Tockr’s website.