Top 5 Watches With Pulsometers — My Favorites From Longines, BOLDR, Graham, And More

These are the picks that got my heart racing!
Brandon Baines
comments 15
Share

Often referred to as a “doctor’s watch,” a pulsometer chronograph is a handy tool that makes checking one’s heart rate a breeze. Don’t worry, though. Despite the nickname, you don’t need to have a Ph.D. to use one. As one of the most straightforward chronograph scales out there, all it takes is a bit of curiosity, and, well, access to one. Thankfully, whether you’re a medical professional, a cardio-loving athlete, or a chronograph nut on the prowl for something different, there is a pulsometer watch out there for you.

Today, I’m bringing you my top five picks for the best pulsometer chronographs on the market. If you’d like a refresher on how to use one (as well as a tachymeter, telemeter, and asthmometer), check out our Definitive Guide to Chronograph Scales. If you read my picks for the top 5 tachymeters and telemeters, you’ll know that I prefer to focus on available, highly legible selections produced in the modern era. Spoiled for choice with tachymeters, I was even able to exclude limited editions and discontinued models! Unfortunately, pulsometer chronographs are just not the most prevalent watches on the market, and I had to relax the criteria somewhat this time around. Nevertheless, at the time of writing, all of these pulsometers are available somehow, and I will certainly let you know how to get your hands on them. Let’s go! 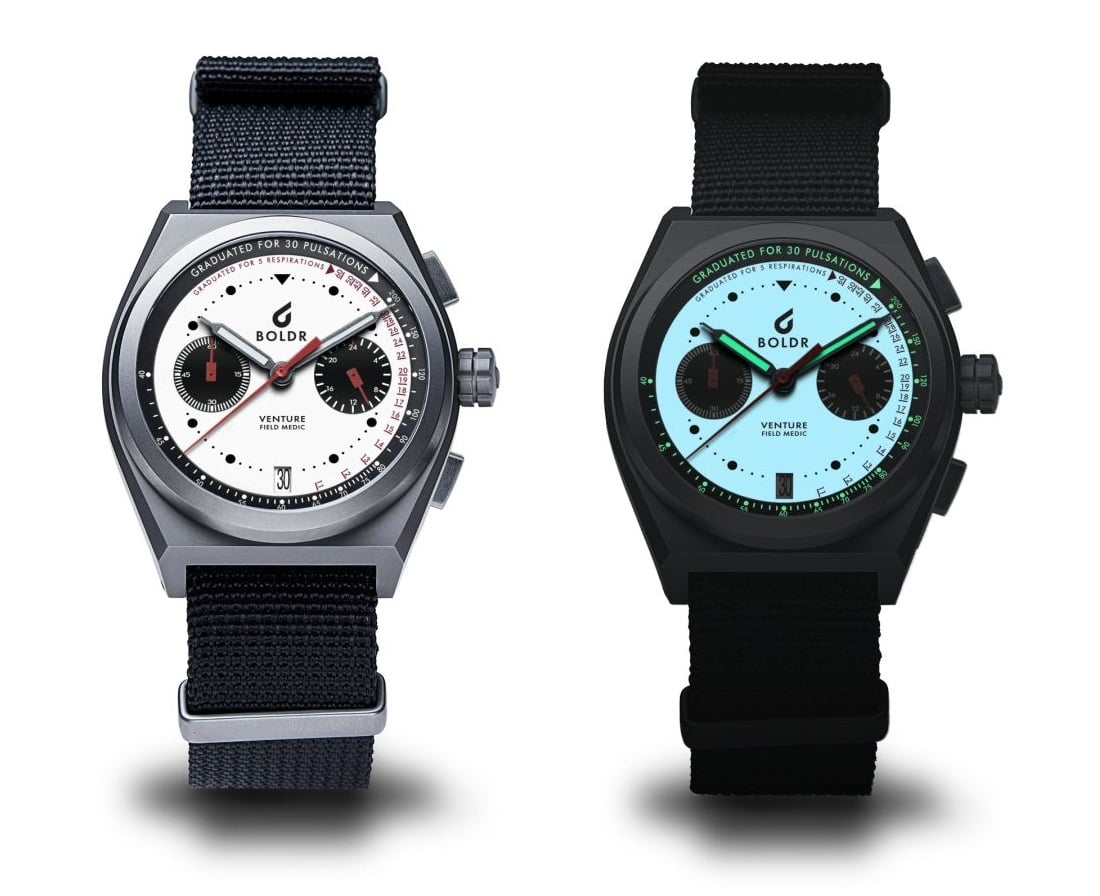 Working up the price ladder from least to most expensive, we’ll start off with a remarkably affordable and capable choice. The BOLDR Field Medic II is quite possibly one of the most legible pulsometers you will find on the market today. As it should be, for it is designed specifically with real medical professionals in mind. The black pulsometer scale contrasts perfectly against the stark white dial. As you can see, however, these components aren’t exactly run-of-the-mill. They are, in fact, fully luminescent! In the dark, the Japan Superlume dial lights up like a torch, while the silhouette of the chronograph seconds hand reaches all the way to the glowing pulsometer scale. This feature really sets it apart from the other options on this list. For double the functionality, it even includes a red asthmometer scale, hearkening back to medical watches of old. 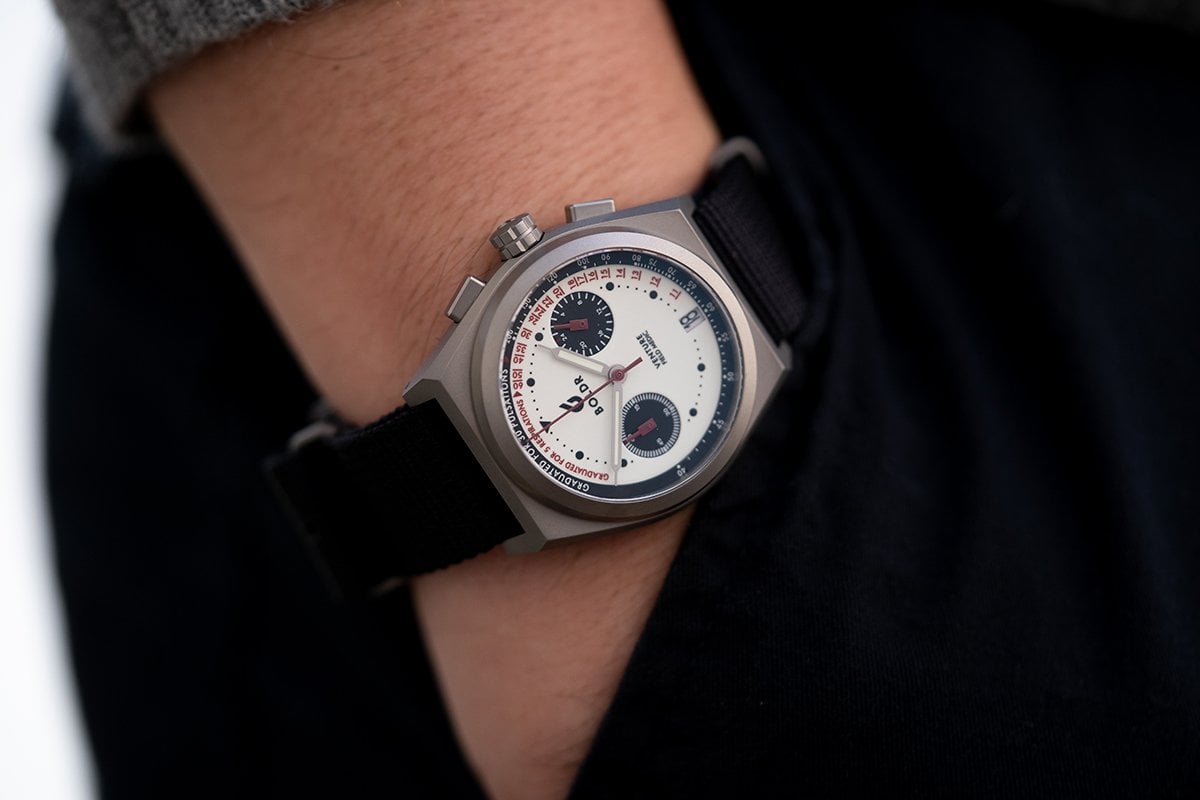 Thanks to the contrast between the two scales, I feel they don’t distract from each other at all. Whether you’re using the pulsometer or the asthmometer, they are easy to distinguish at a quick glance. I also love the presence of red accents. That vivid pop of color really helps to bring the straightforward black/white color palette to life. The BOLDR Field Medic II uses the mecha-quartz SII VK-64 movement, a popular and reliable choice with many microbrands. The 38x44mm titanium case is 12.2mm thick, and it’s equipped with a flat sapphire crystal and 200m of water resistance. Even if you’re not in the market for a pulsometer, you can’t argue against usable specs like that.

At just under €257, you likely can’t argue with the price either. While temporarily out-of-stock at the time of writing, it is available for pre-order on BOLDR’s website. 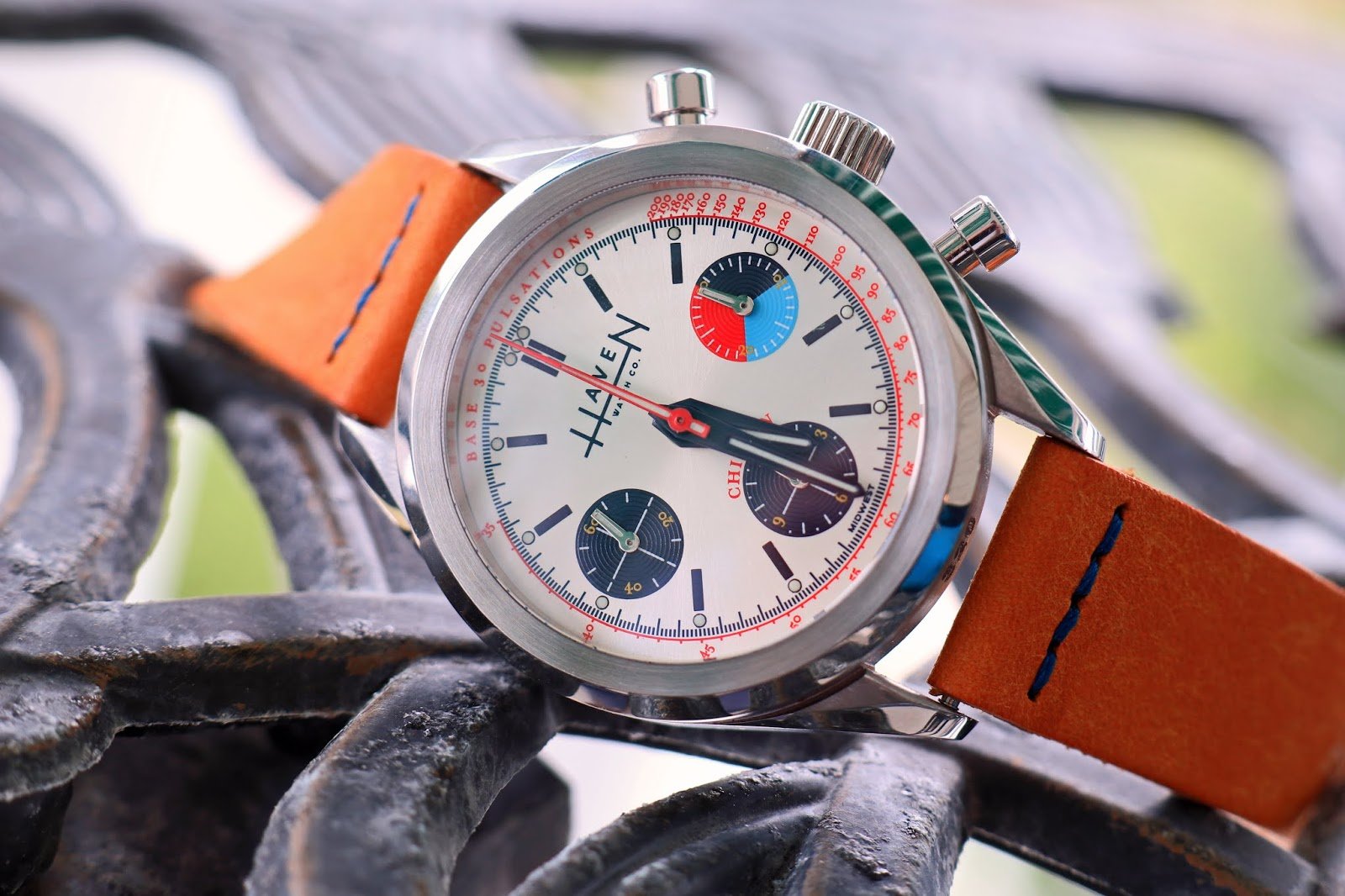 Off the radar: the Haven Chilton

Mike Stockton opened my eyes to Haven’s watches, and I was impressed by what I saw. While the US-based microbrand founded by vintage watch lover Weston Cutter isn’t making huge waves in the world of advertising, it is certainly making some neat timepieces. The first thing I noticed when I saw this variant of the Chilton was actually not the funky color scheme, but rather, how clear the pulsometer was. The red scale contrasts both the base silver dial and the navy blue minute track very well. Despite the pulsometer’s proximity to the minute track, the color allows the wearer to instantly differentiate between the two. While I count six total colors on the dial, the red color of the chronograph seconds hand effectively links it to the pulsometer. I’m not sure if that was a conscious design choice, but I find it really helps my brain compartmentalize the information. 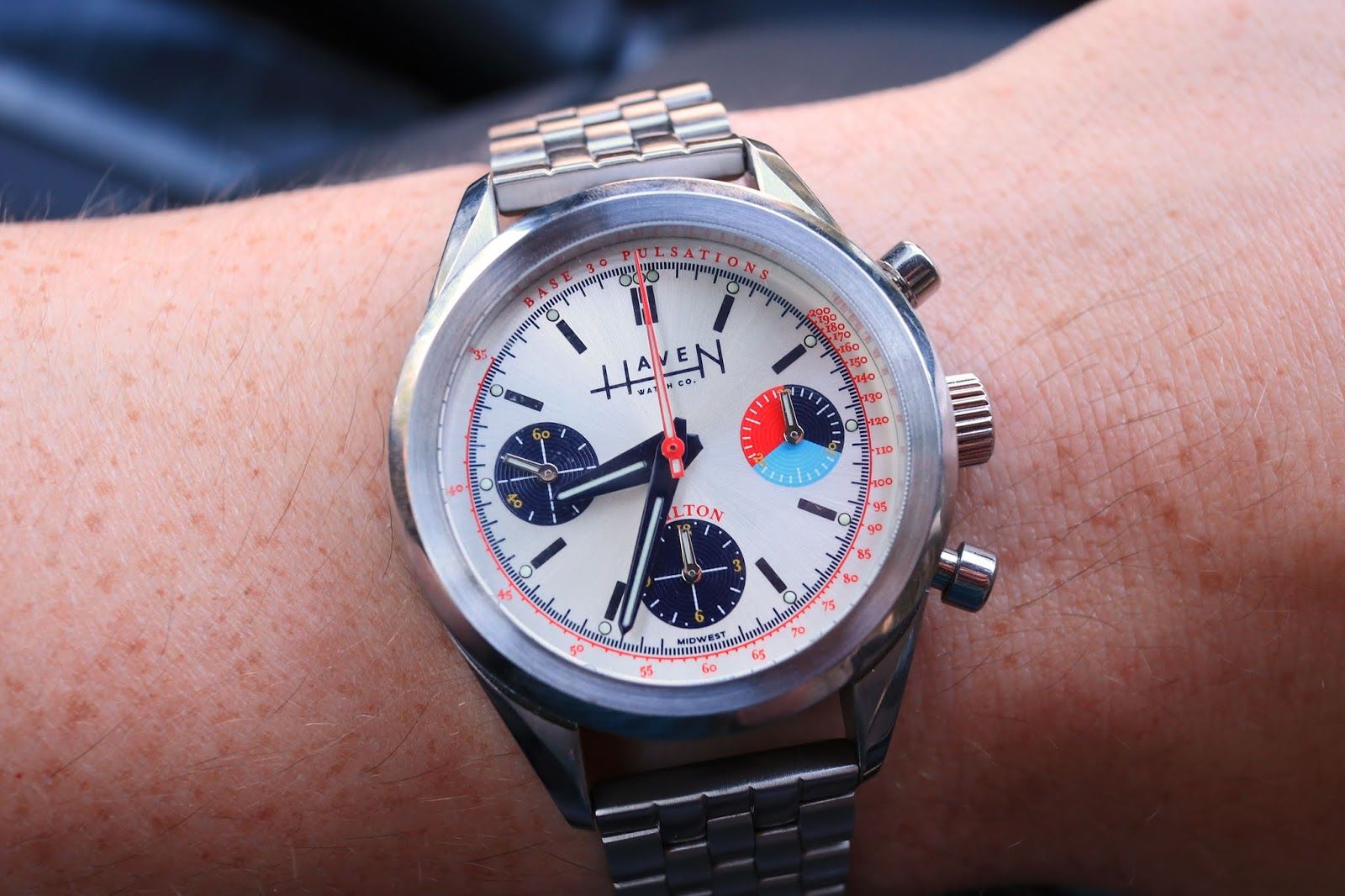 The vintage vibes are incredibly strong with this one. The tri-color 30-minute counter instantly reminds me of vintage Heuer Carreras. At 37.5mm in diameter and 47mm lug-to-lug, the case is simultaneously small and substantial. For a chronograph, it’s also pretty slim at just 13.1mm thick. This is thanks to the manually wound SW510M caliber inside. Sellita’s version of the Valjoux 7753, the SW510M provides 50+ hours of power reserve, hacking seconds, and the workhorse reliability you’d expect. The Haven Chilton comes on a stainless engineer-style bracelet with your choice of an additional brown or navy blue leather strap. Although there is also a blue-dial option, that one does not feature a pulsometer. While I do like both versions, if you want a pulsometer, silver will be the only choice. 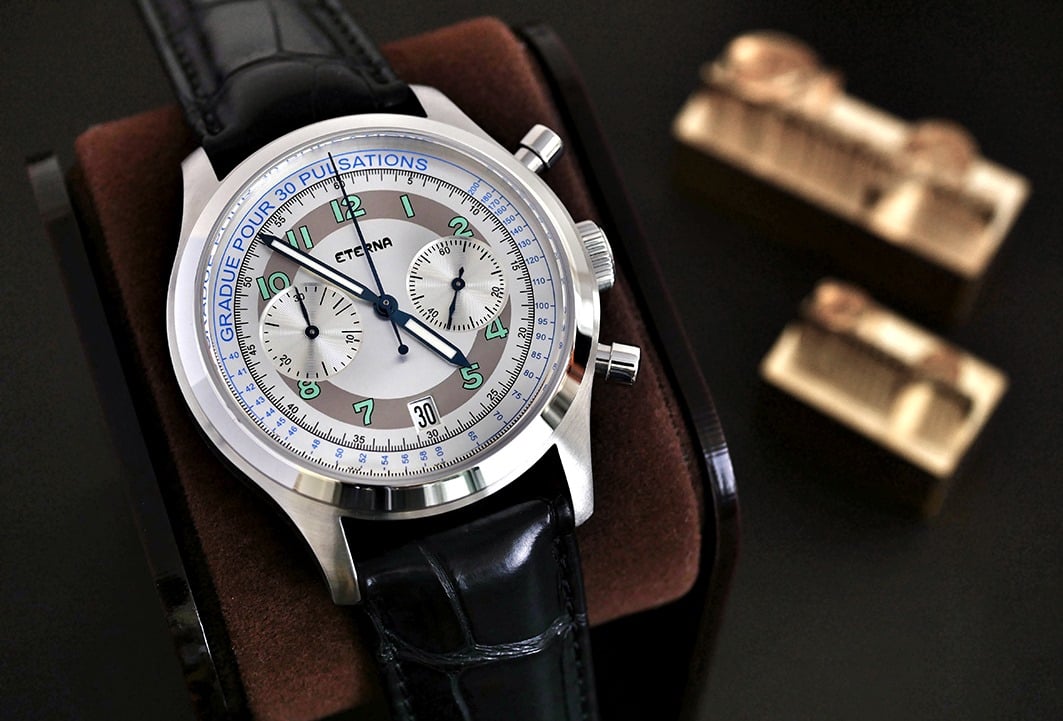 The re-issue: the Eterna Heritage Pulsometer 1942

Perhaps the Haven hits the financial sweet spot, but microbrands aren’t your jam. You want a brand with a cool bit of history behind it, but not so much that it destroys the ol’ wallet. Well, my friends, Eterna is here to fill the gap with the Heritage Pulsometer 1942. This watch pays faithful tribute to a model originally released in, you guessed it, 1942. Back then, it was (apparently) the only pulsometer chronograph wristwatch on the Swiss market. As on many historical chronographs, the use of colors and effective sectoring enhance legibility. The blue pulsometer scale along the perimeter of the dial matches well with the blue chronograph seconds hand. I particularly love that the chronograph seconds hand extends all the way to the very edge of the dial, rather than just pointing to the scale. This allows the wearer to read the pulsometer with the utmost precision. 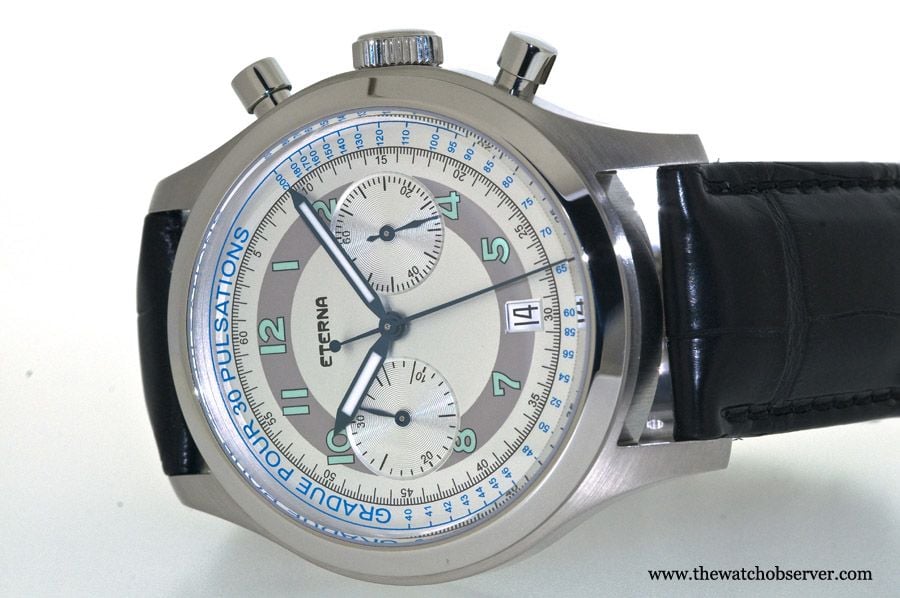 Eterna itself is a brand any true watch enthusiast can appreciate. The brand pioneered the use of ball bearings in automatic rotors, which became the industry standard. Eterna’s historical movement manufacturing division, ETA AS, provided the backbone for the modern-day ETA. The watch before you features an automatic ETA 2894-2 movement. Based on ETA’s caliber 2892, this is a modular chronograph. Nevertheless, it remains significantly thinner than the more common Valjoux calibers. The watch itself is just 13.1mm thick. For an automatic chronograph in this price range, that is fantastic. At 42mm in diameter, it is quite a bit larger than the Haven and BOLDR, but could suit those with larger tastes/wrists well.

The Eterna Heritage Pulsometer is now discontinued, but it’s is readily available on Chrono24. At the time of writing, prices range from €1,499 to €2,203. 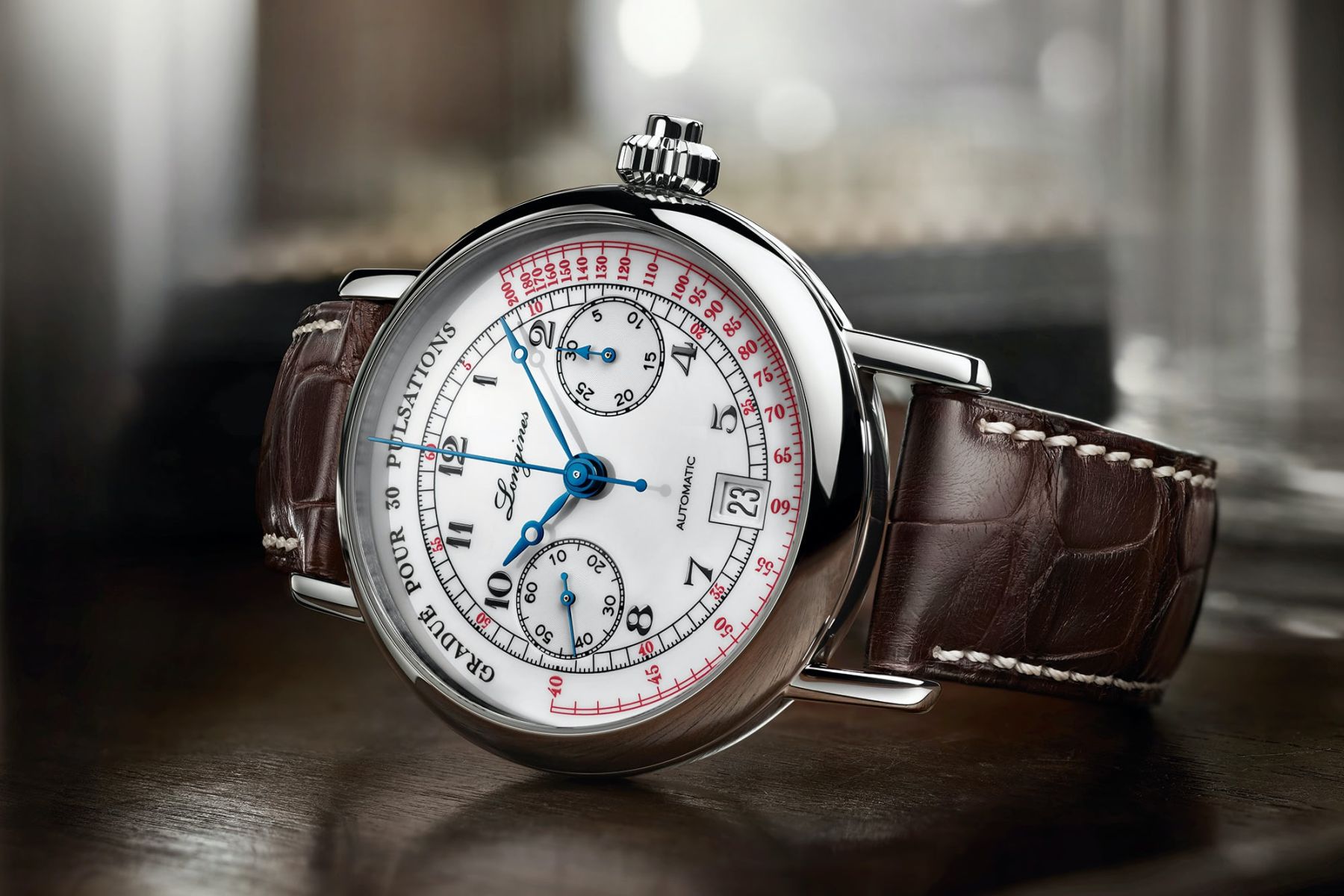 A crush I can’t crush: the Longines Pulsometer Chronograph

As hard as I try to banish it from my mind, the Longines Column-Wheel Single Push-Piece Pulsometer Chronograph has remained an object of my horological affections for about four years now. Despite its longer-than-necessary official name (a wordy name for a wordy guy, am I right?!), its design simply leaves my mouth ajar. Inspired by Longines chronographs of the 1920s, it is nothing if not insanely legible. The historical blend of a red pulsometer scale and blue Breguet hands on the white lacquer dial provides even more contrast than the Eterna. The pulsometer scale itself stands proudly on the perimeter of the dial. To my delight, the chronograph seconds hand reaches not just into it, but past it. When it comes to providing a clear reading, can you really ask for much more? 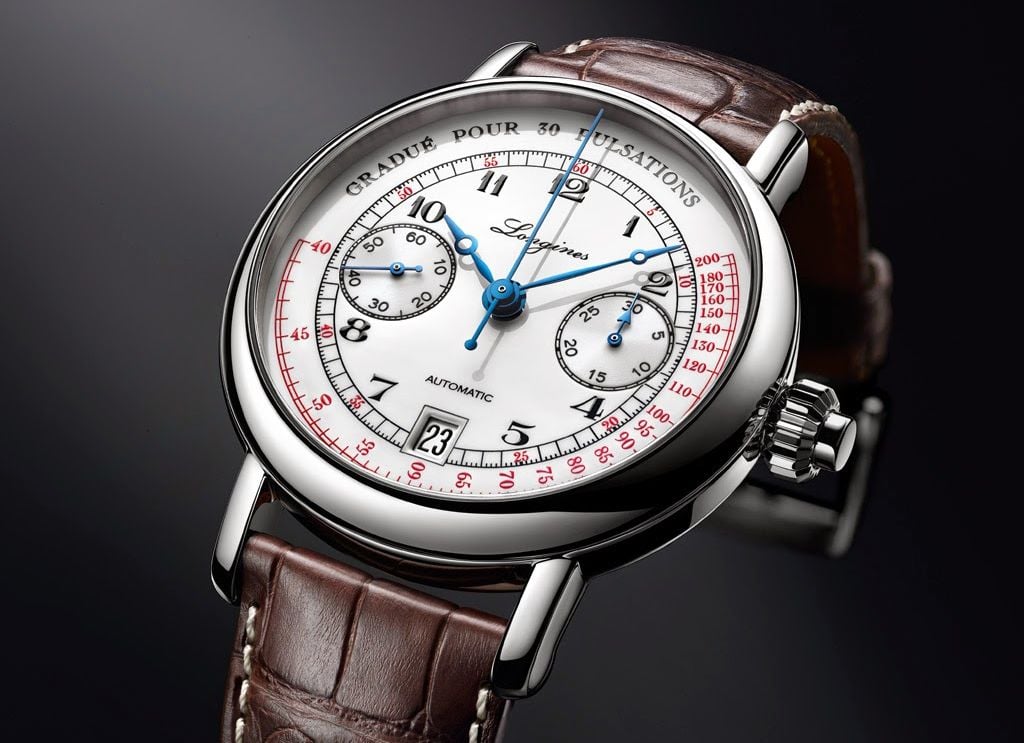 The case is 40mm in diameter, 49.5mm lug-to-lug, and 13.5mm thick, providing a modern wrist presence to complement the vintage styling. The date window and “Automatic” text are also thoroughly modern touches that, arguably, it could have done without. On the positive side, at least the position of the date window keeps the dial symmetrical. The watch runs on caliber L788. ETA designed this movement specifically for Longines. While it’s based on the Valjoux 7753, it is actually a monopusher chronograph, with the start/stop/reset functions all controlled through the central pusher in the crown. It has a power reserve of 54 hours and also features a beautiful blued column wheel. Some, including Rob Nudds, may question the use of a column-wheel in a 7750-based movement intentionally designed to use cams. Nevertheless, it provides a more refined tactile experience.

The Column-Wheel Single Push-Piece Pulsometer Chronograph is available directly from Longines for €3,790. 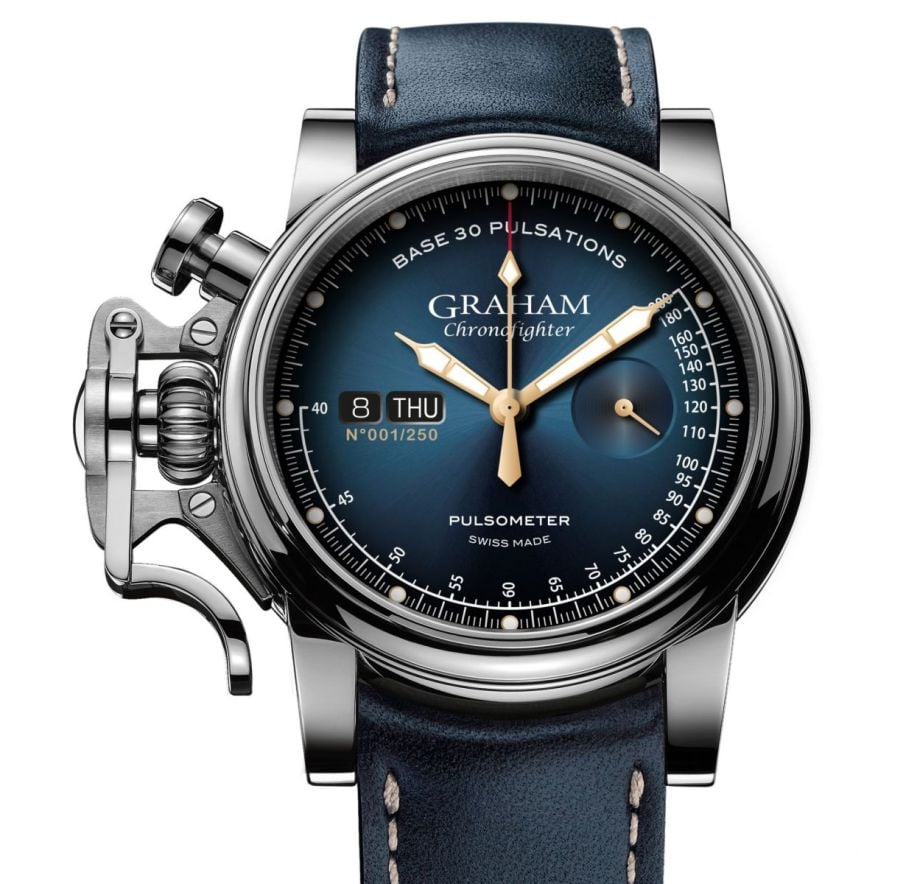 I expect this one to ruffle some feathers. Regardless of the jarring design, however, it is impossible to deny that this Graham Chronofighter is truly a purpose-built pulsometer chronograph. In fact, it is so purpose-built that it completely does away with the elapsed minute and hour totalizers, as they are unnecessary when checking a pulse. Placing the pulsometer scale on the inside of the minute/seconds track brings the main function to the forefront of the design. Honestly, I do think the shorter hash marks between the minute/second markings distract from the pulsometer a bit. I’d prefer Graham to have left them off completely. In terms of color, however, the white pulsometer markings contrast the blue dial very well. The red tip of the rose-colored chronograph hand easily draws the eye to wherever it points.

I’m sure a point of contention will be that huge trigger over the crown. Graham has been using this design since the early 2000s. It is inspired by World War II-era bomb timers, like the one by Universal Genève seen above. The trigger both protects the crown and makes the chronograph easier to use while wearing gloves. Simply pull the trigger once to start, again to stop, and press the top pusher to reset. While quite utilitarian, this design will not be to everyone’s taste. The case is substantial at 44mm in diameter, 52mm lug-to-lug, and 15.5mm thick. From this video review, it appears to have a beautiful, rounded profile and a nicely domed crystal. I also think the combination of a sunburst blue dial and rose gold hands looks quite elegant. The Graham caliber G1718 inside is a Valjoux 7750 that has been modified for the unique pusher setup.

At the time of writing, this Chronofighter Vintage Pulsometer Limited Edition of 250 pieces is still available from Graham for $5,450 USD, or €4,591 by today’s conversion.

I’m interested to hear your thoughts on my picks. Did any of them tick the boxes for you? I must say, though I’ve had a watch crush on the Longines for years, that BOLDR just may be the perfect knock-around watch I never knew I needed. Let me know what you think!  If you have any other good choices for legible, relatively accessible pulsometers, drop them below in the comments.