We received an invitation for the finish of the Tour de France in Paris with official timekeeper Tissot. While we are not exactly known for being very sporty, some of us do enjoy a workout every now and then. In-between work, traveling, quality time at home and the typical Dutch weather (rain is falling straight down) I find myself on a road bike from time to time doing recreational trips. Nothing compared to the participants in the Tour de France. Spread out over 22 days they cycle over 3500km on their racing bikes. 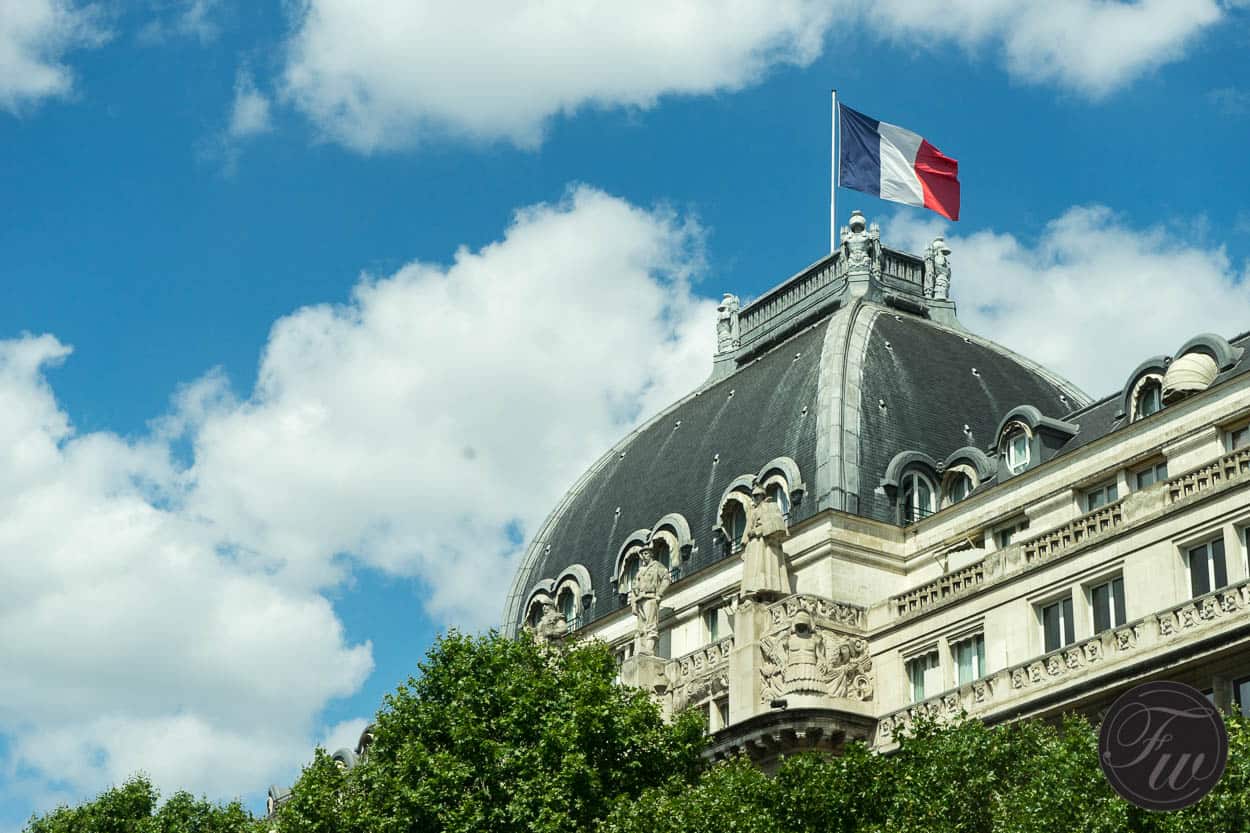 The 2016 edition of the Tour de France started on the 2nd of July in Normandy. From there the riders went to the southern part of France, going through the Pyrenees on both the Spanish and France sides of the border. Going though Andorra, the route continues towards Switzerland, visiting Berne and then goes back to the French Alps. From here the entire caravan is transported to Chantilly for the final stage and traditional finish on the Champs Elysées in Paris.

That same Sunday morning we find our way to Paris to enjoy the Tour de France with official timekeeper Tissot. After arriving and checking into our hotel around noon, we walk towards the impressive Arc de Triomphe, exploring a bit of the final route of the Tour. Stopping over at the Tissot Boutique on the Champs Elysées where the special Tissot ‘Tour de France editions‘ are on display. 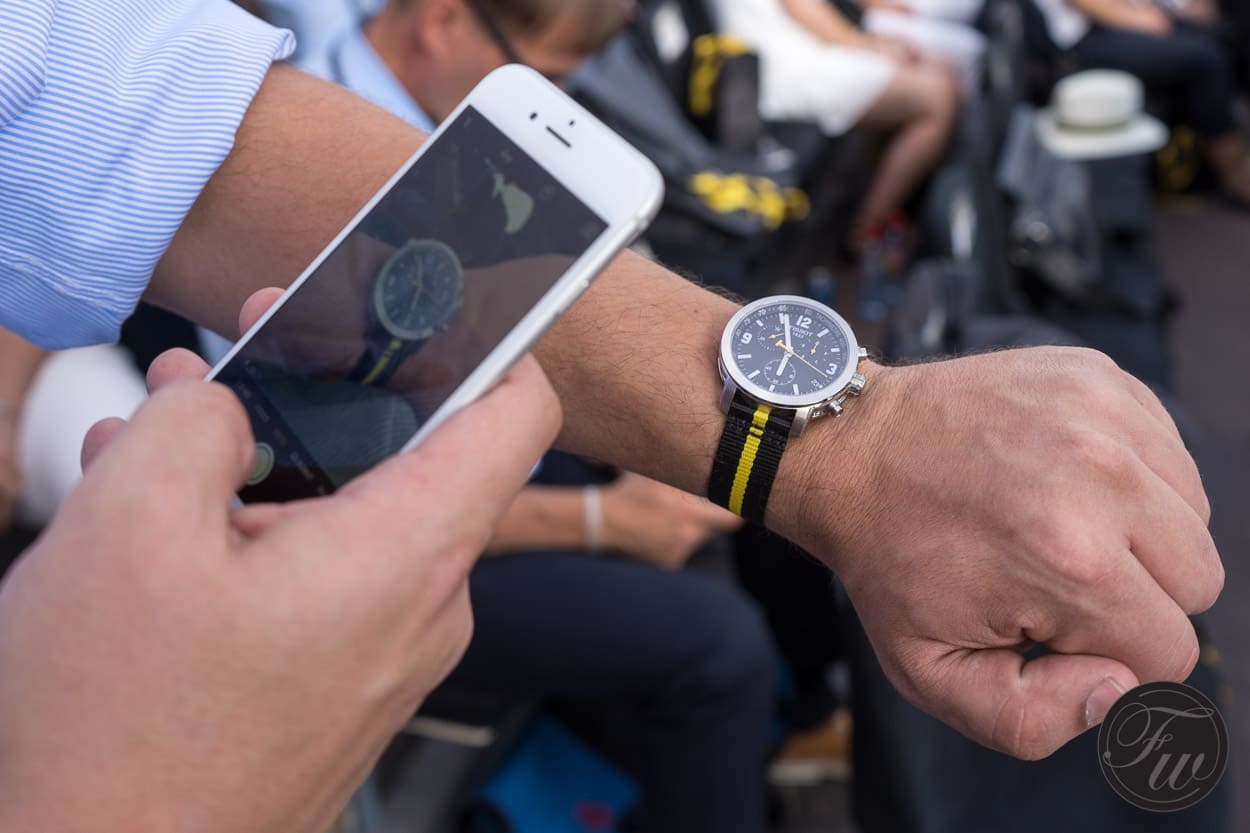 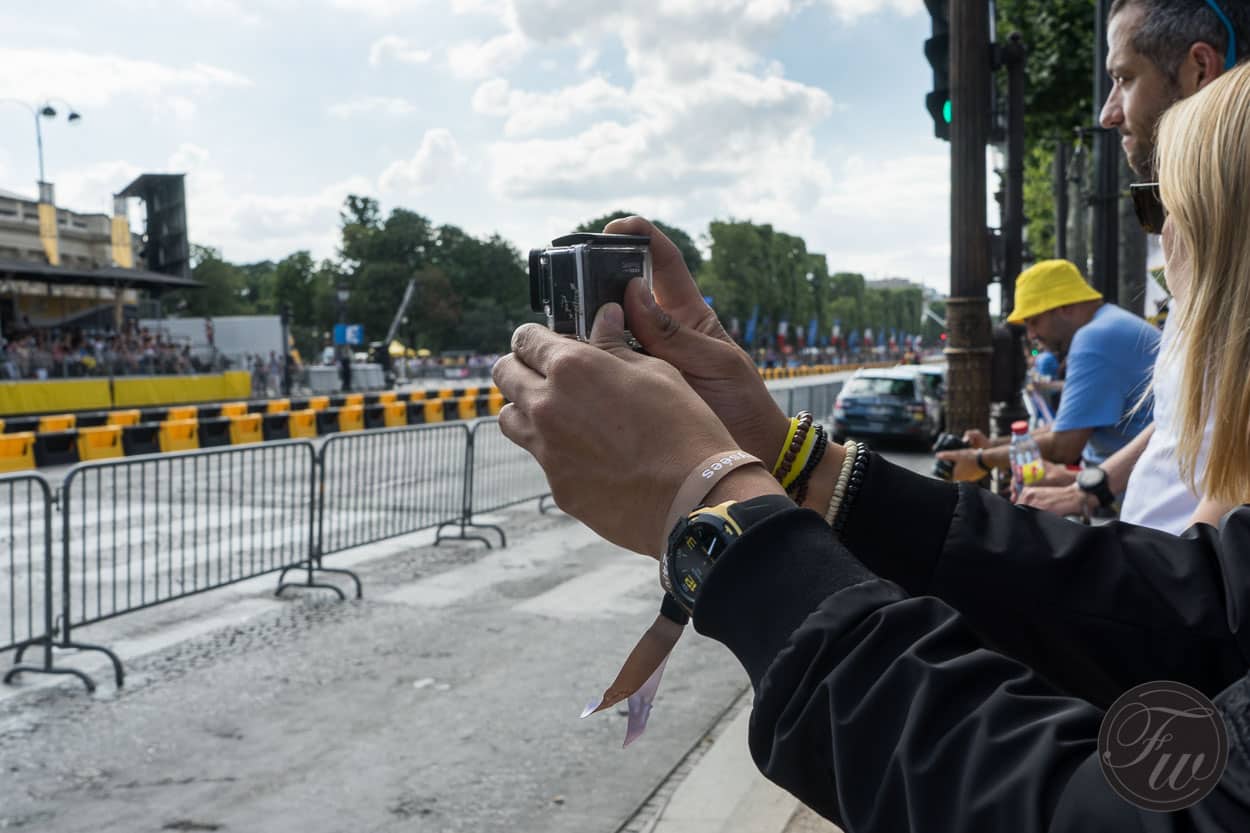 Meanwhile the ladies compete in ‘La Course‘, 89 kilometres of laps around the Champs Elysées going around the Place de la Concorde and the Arc de Triomphe. 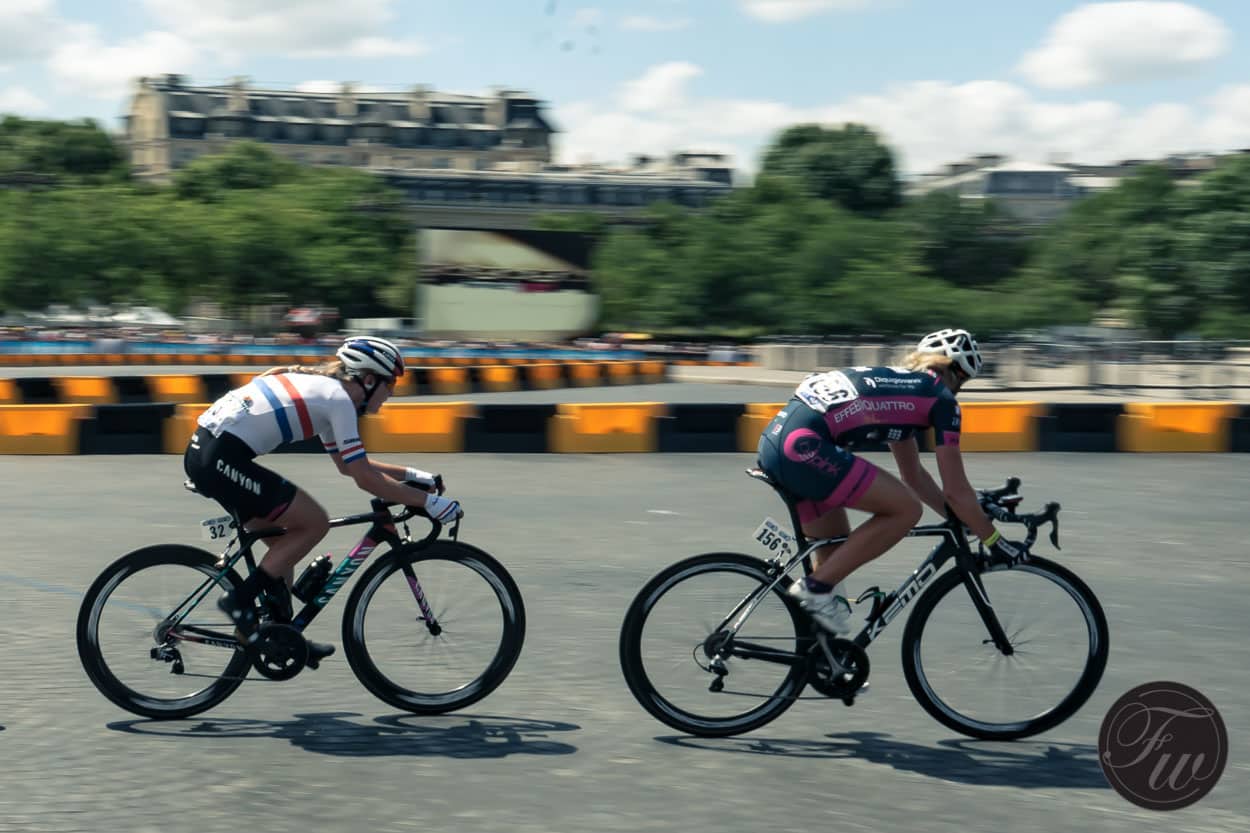 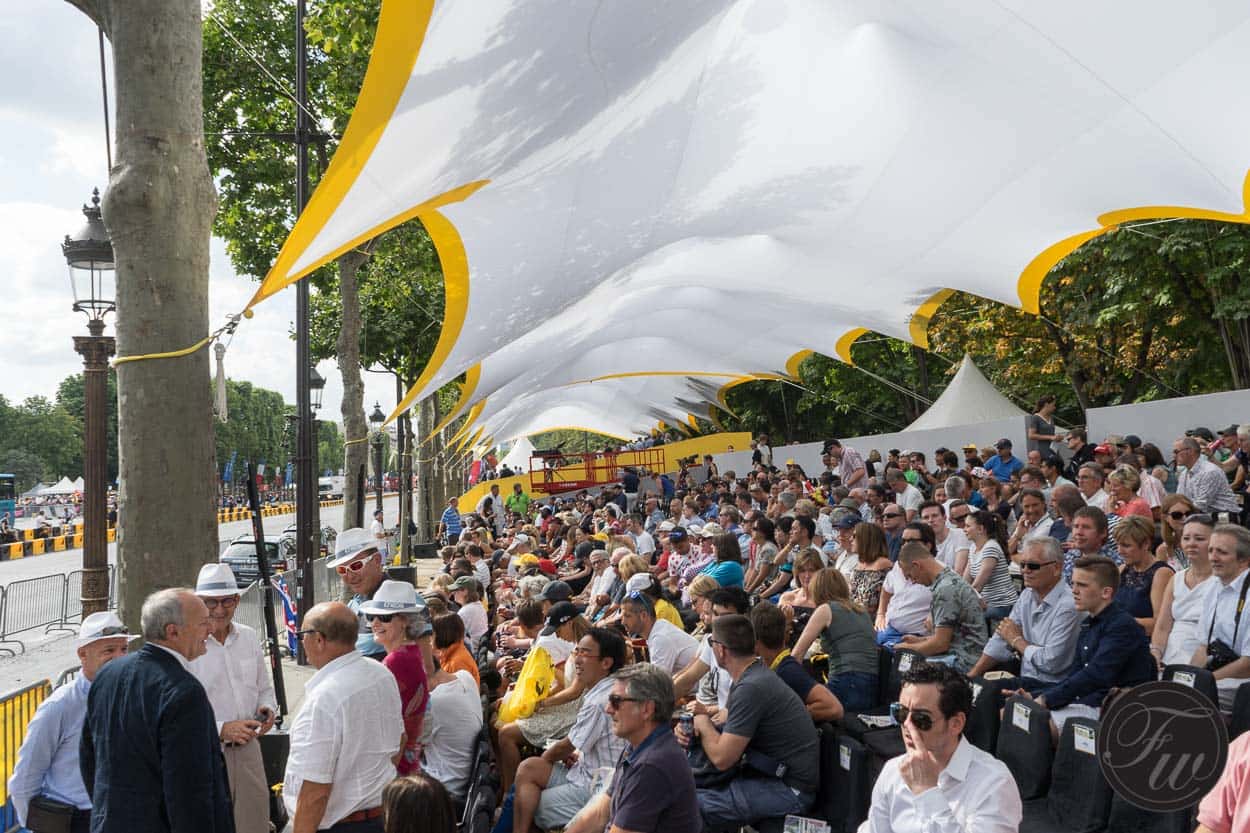 Our stand for the day

Later that afternoon, as the riders of the Tour are starting their last and final stage towards Paris, the official program begins for the spectators. After finding our places just behind the finish line, the publicity caravan parade begins. On the screen we see how the leading team enjoys an alcoholic beverage during the beginning of the final stage, apparently a tradition in the Tour. Meanwhile passing along, before the cyclists arrive in Paris, there are 170 decorated vehicles in all shapes, sizes and colours representing the sponsors. Apparently created in 1930 already, the publicity caravan became an essential part of the tour. Handing out a massive amount of small goodies during the stages. For many people it’s even the first and foremost reason to come and see the race. 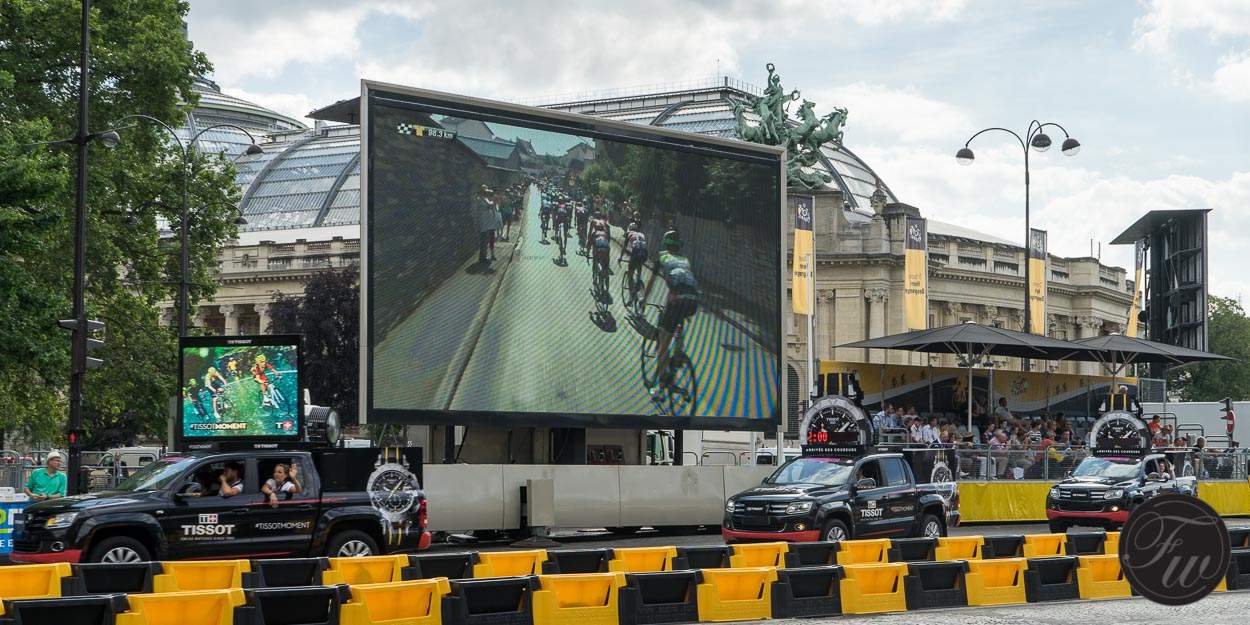 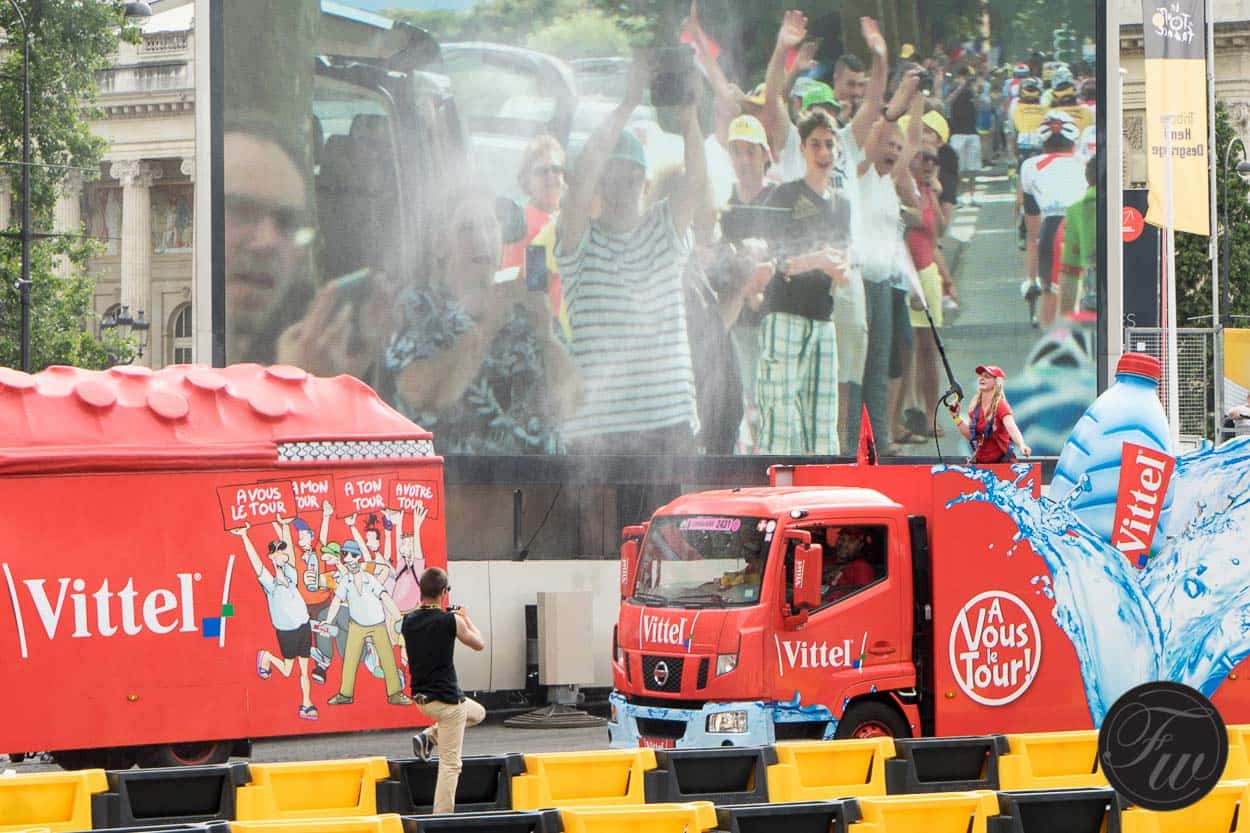 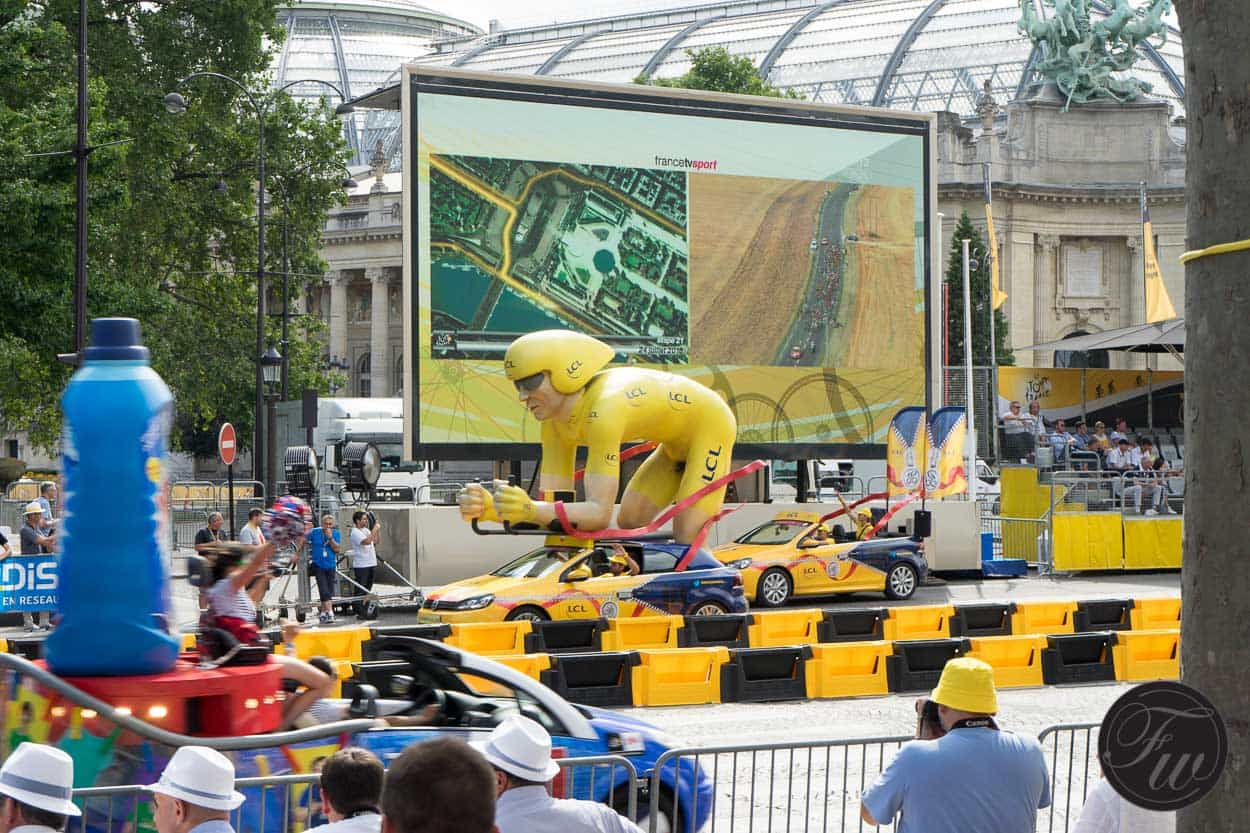 Creations driving around in the publicity caravan

Not much later, the riders pass along for the first time. Making the full crowd cheer like crazy. An impressive moment as 7 jets planes along at the same time. Flying over the Champ Elysées leaving a smoke trail in red, white and blue, the colours of the French national flag. Now the Tour is coming to an end for the riders, only 8 laps of approximately 7 kilometres over cobbles, not the most comfortable road for them. 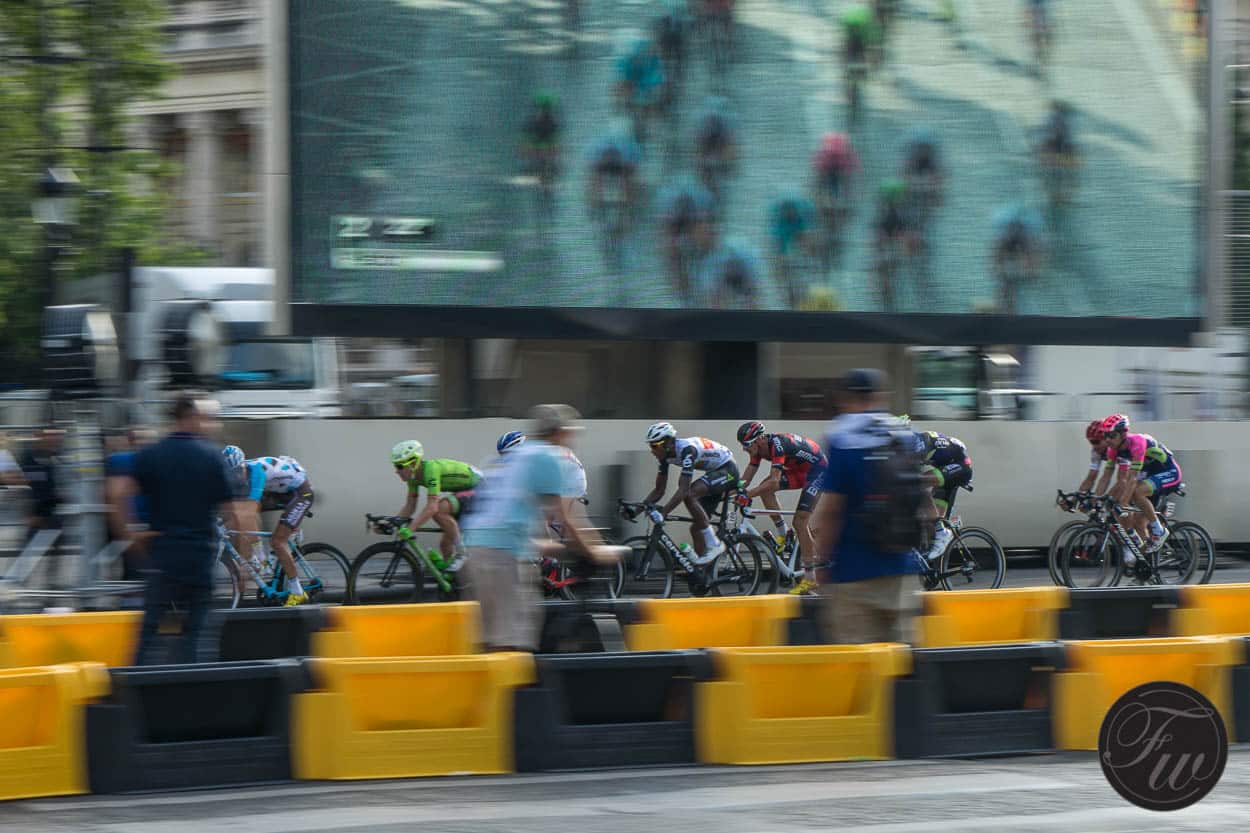 The race in progress 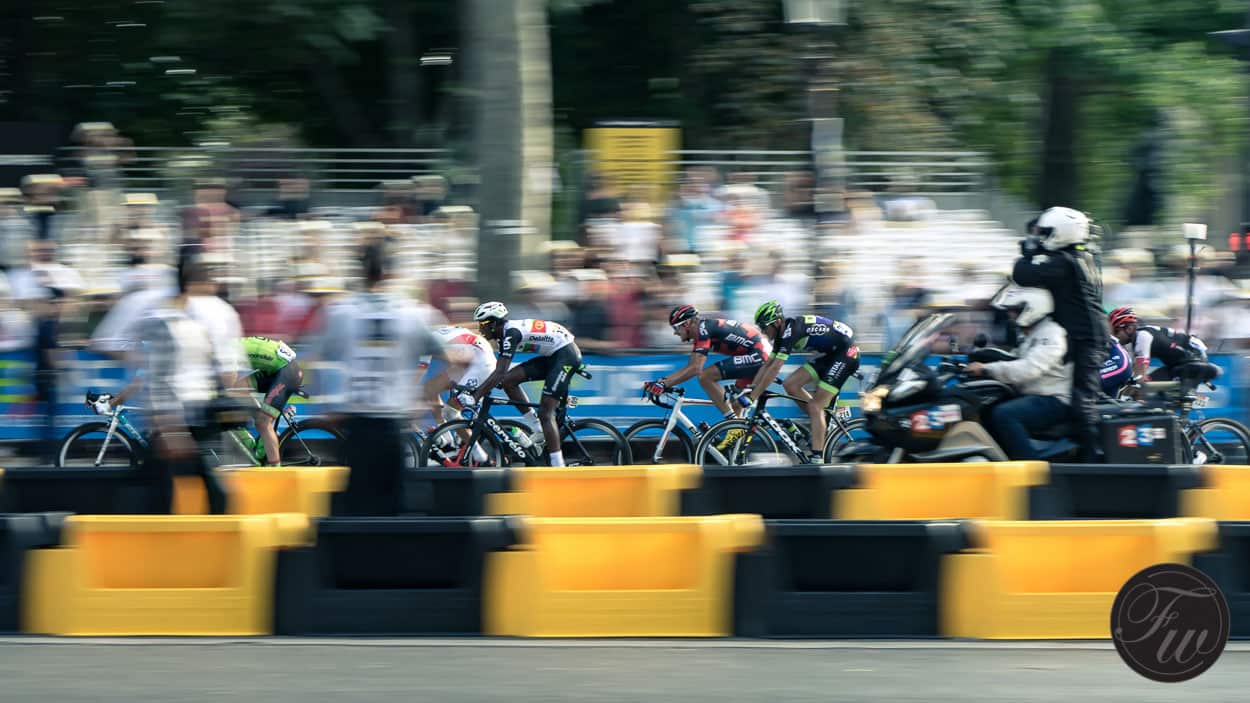 Jerseys of the Tour de France

During this final stage we see all the famous cycle jerseys pass along. Yellow for the overall time leader, worn by Chris Froome who is already winner of the Tour de France. Green for the cyclist with the highest number of sprint points awarded during the various stages of the Tour. Depending on the stage (flat/medium/high) a certain amount of points are rewarded to the the first 10~25 riders. For the ‘king of the mountain’ there is the polka dot jersey. White with red dots. For the leader in the mountain stages. Last we have the white jersey, basically the same as the yellow one but only available for those under 25 at the beginning of that years Tour de France.

Slowly the riders pass along again and again, making their way to the finish. An occasional accident and flat tyre happens in front of our stand. We see the frustration when one of the riders gets a spare bike complete with a flat tyre, losing more important time. 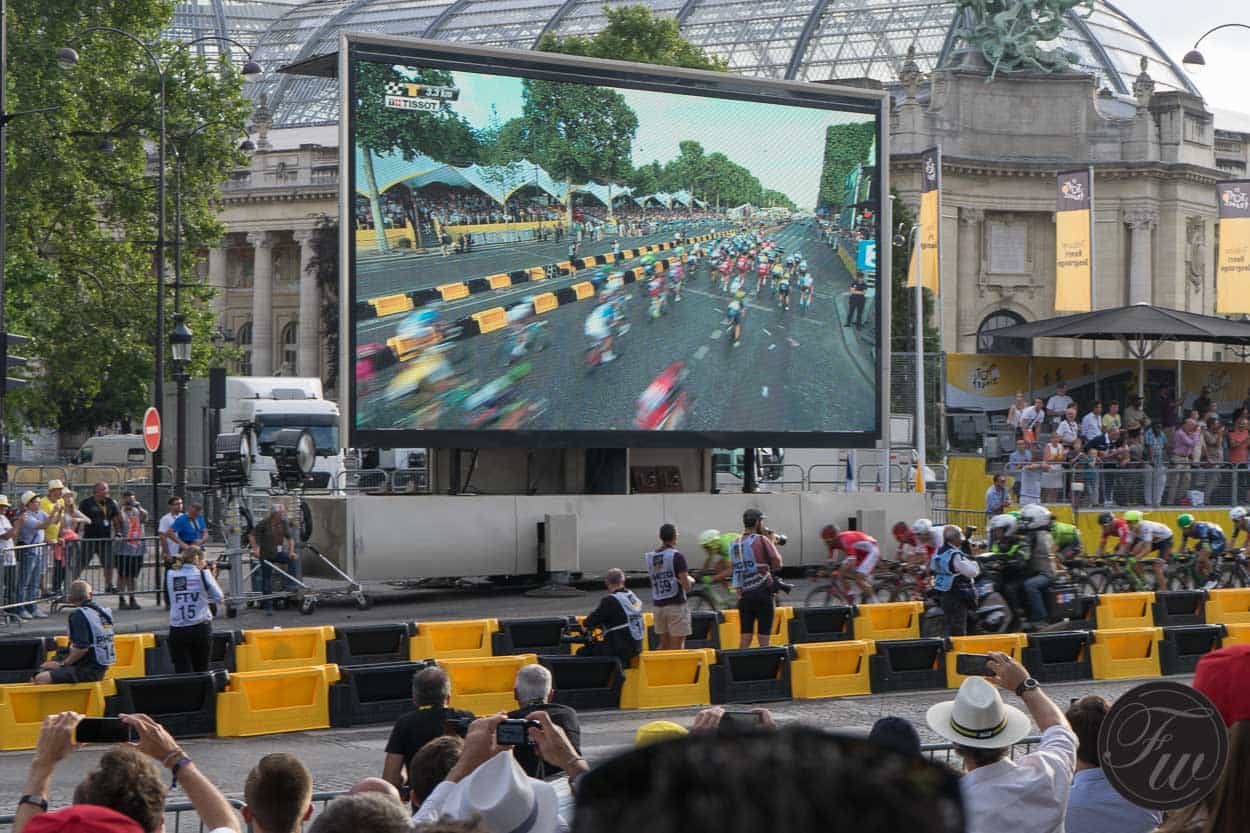 On the screen we follow the action and last meters before the finish line. It’s really a close call, seconds later we see André Greipel, national champion of Germany, taking the victory on the final stage of the Tour de France. Not much later the media takes over the streets for pictures and interviews in front of our stand. Shortly after followed by the award ceremony. 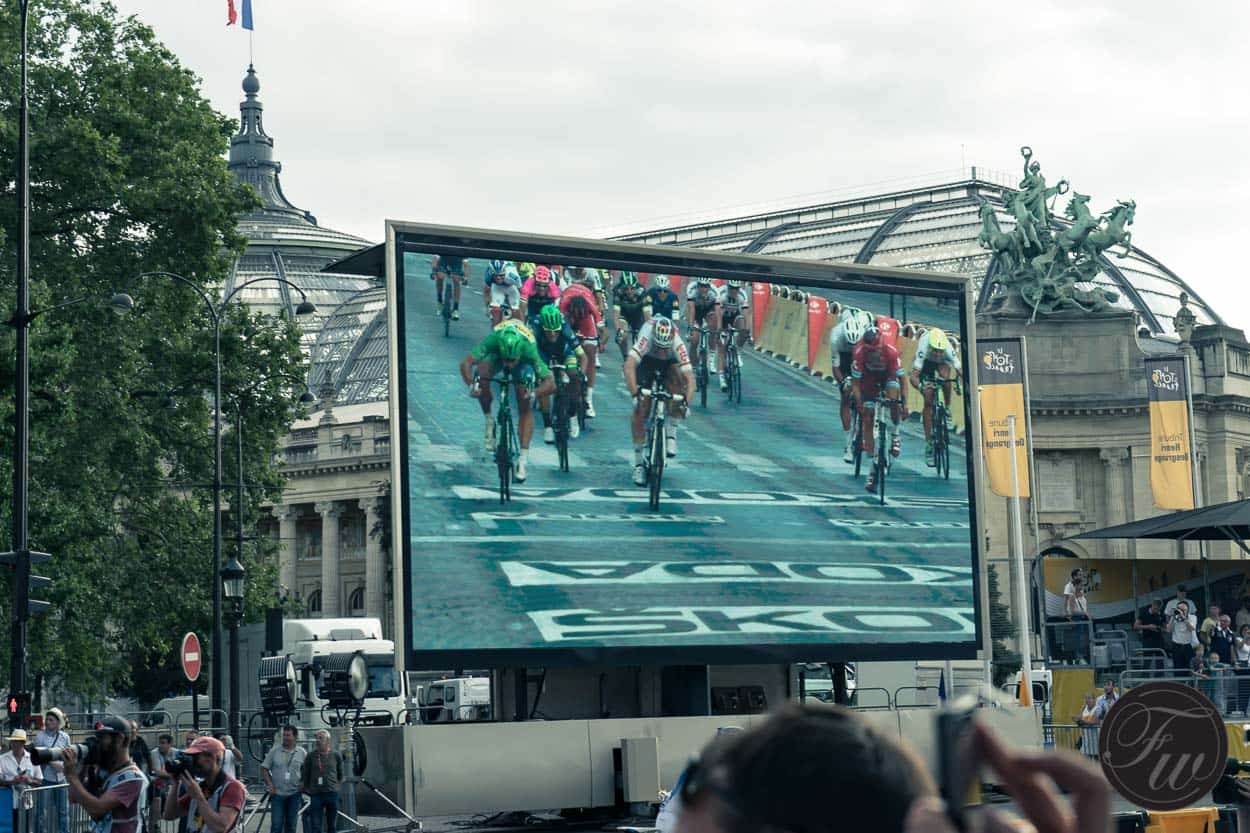 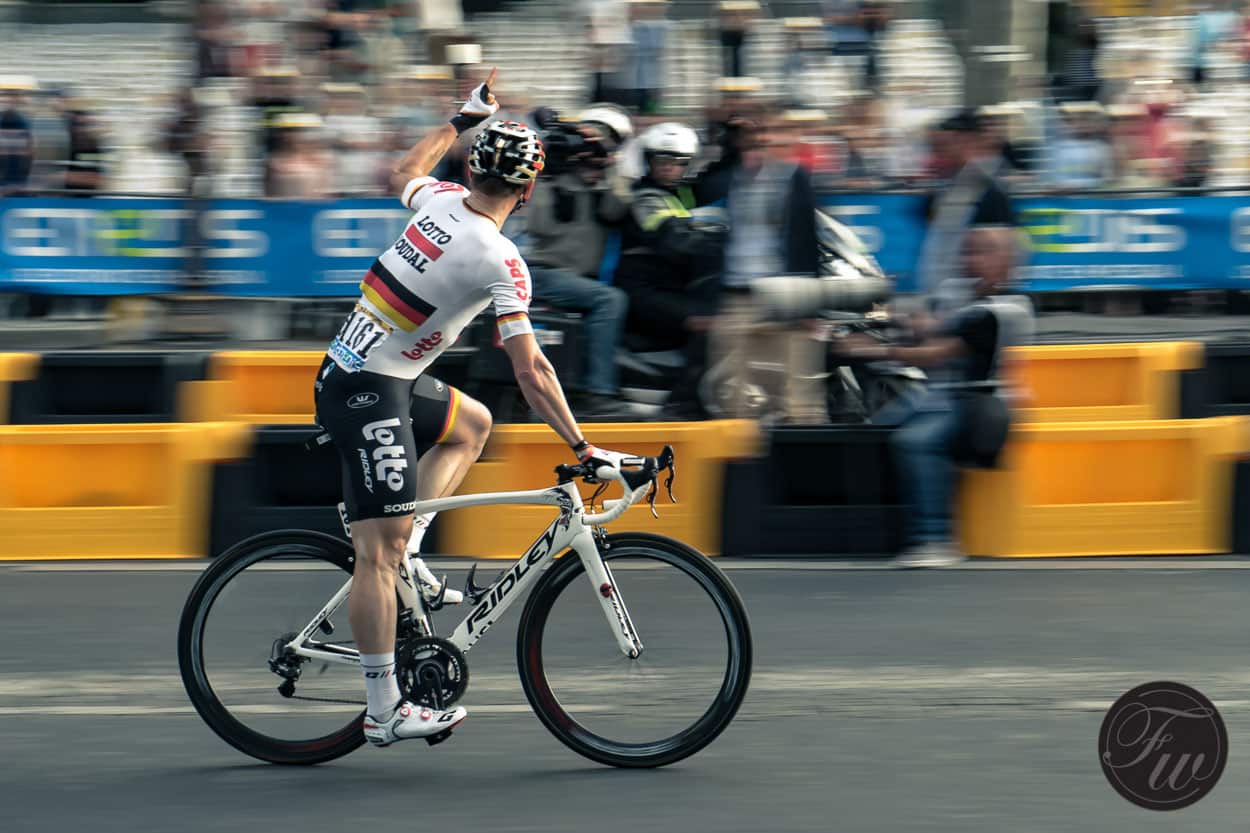 First place in the last stage of the Tour 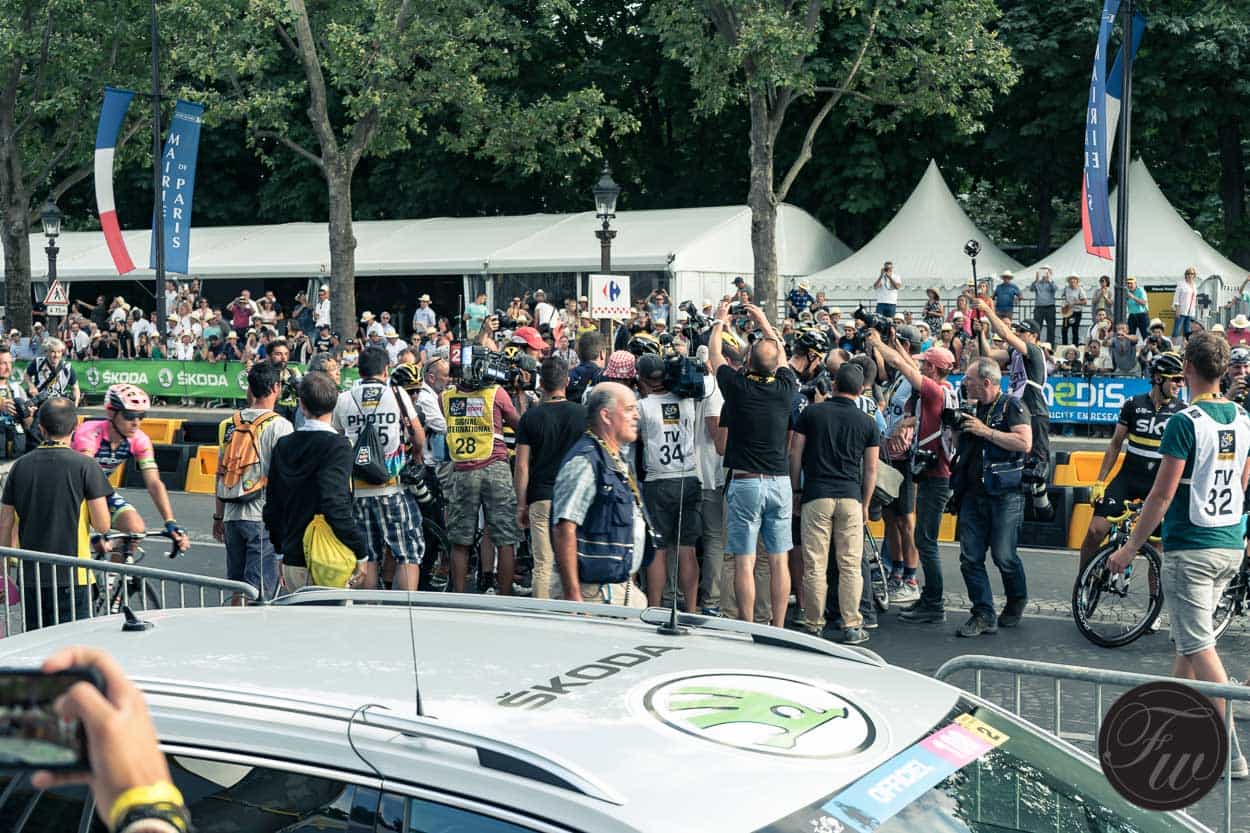 Media take-over of the Champs Elysées 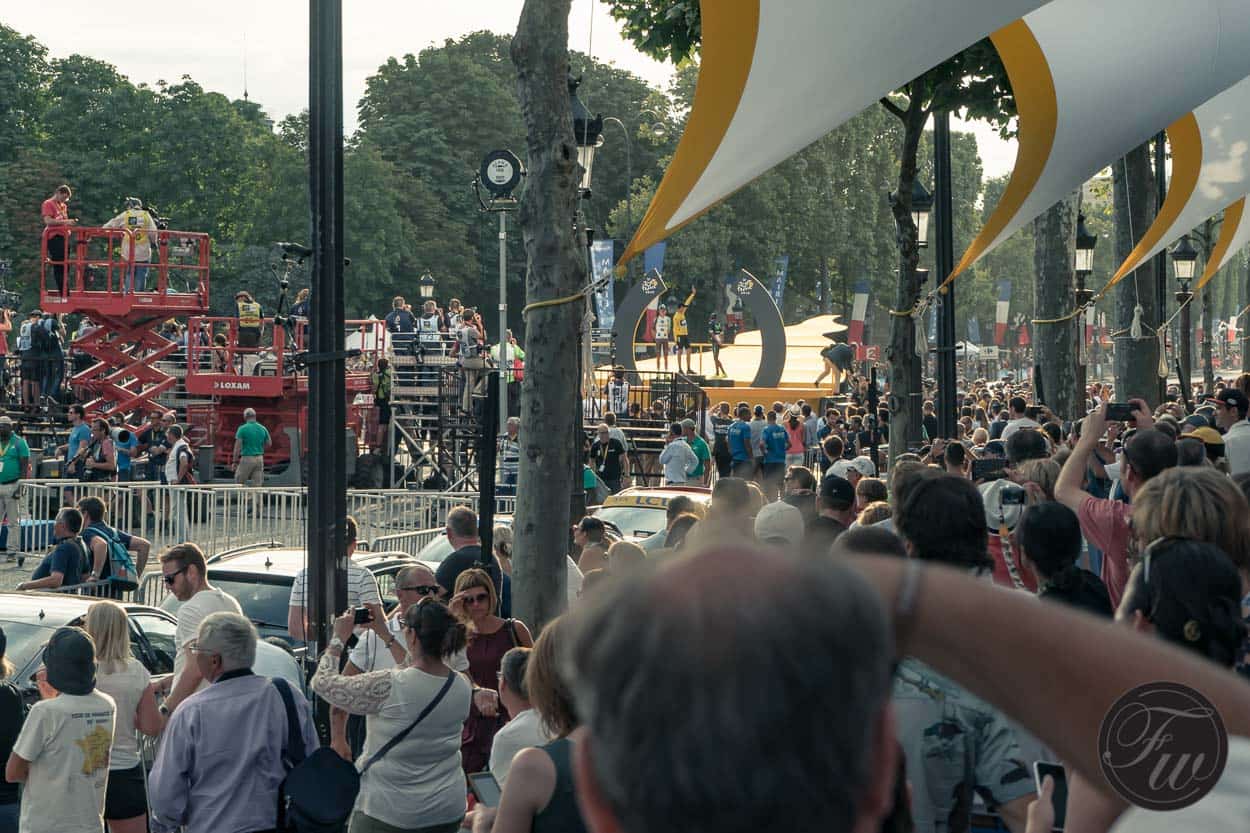 After an impressive day we find our way to a nearby restaurant for dinner with all other guests. Finishing the day with an entertaining show at the Lido around midnight. 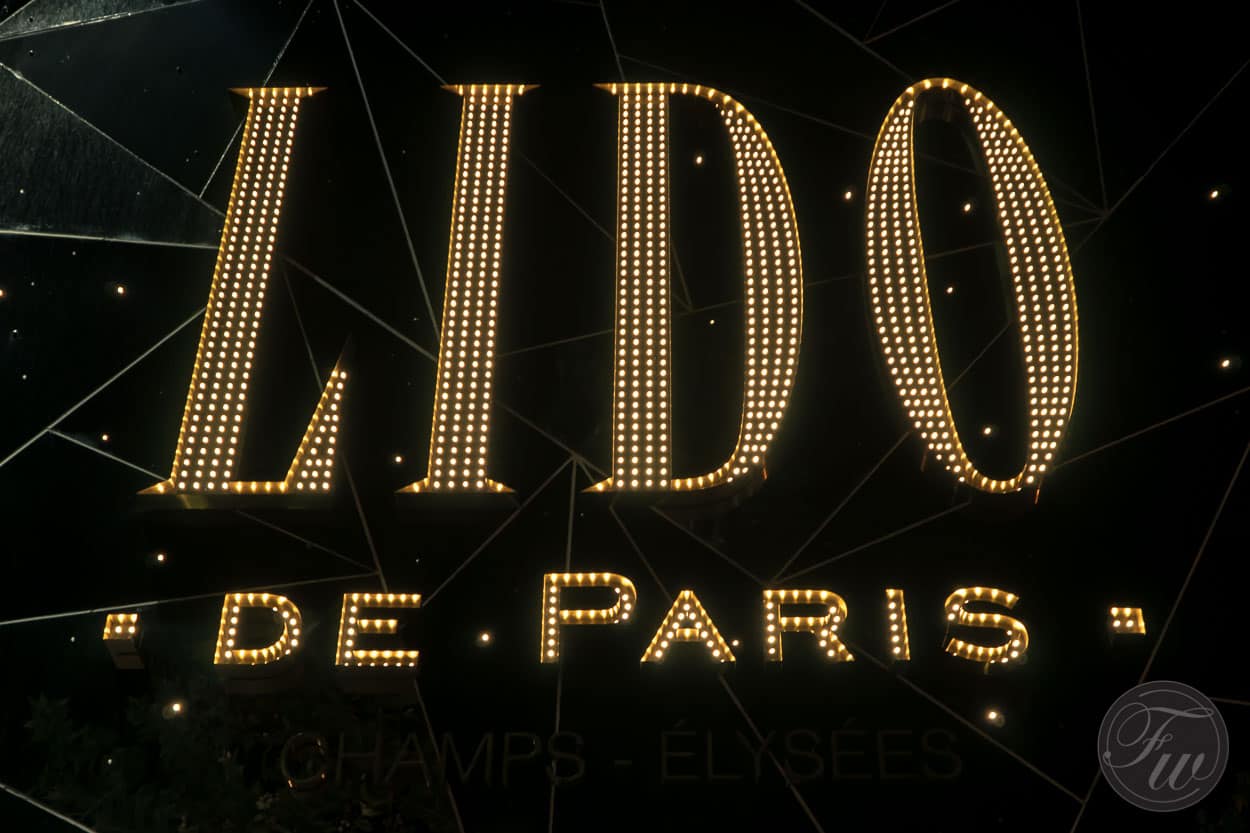 We would like to take the opportunity to give a big thank you to Tissot for inviting us to be a part of this leading sports event and their great hospitality during our stay.