It was already in the pen since last January; my trip to the small and independent brand H. Moser & Cie in Schaffhausen, that finally took place this July, just before most brands were closing down for the Summer Holidays. I was really looking forward to this visit, since I have a weak spot for these small independents, that so often stick their neck out, to come up with something out of this world.

Many of these brands, like Hautlence, Urwerk, MB&F or DeBethune were established about ten years ago and in most cases they were founded by one or two watchmakers that started their own brand out of passion, or sometimes out of frustration. Besides what these genius founders have done in the past and what prize they may have won during their studies, there is not that much more to tell about the history of their brand, because there is none and I don’t mean that negative at all! 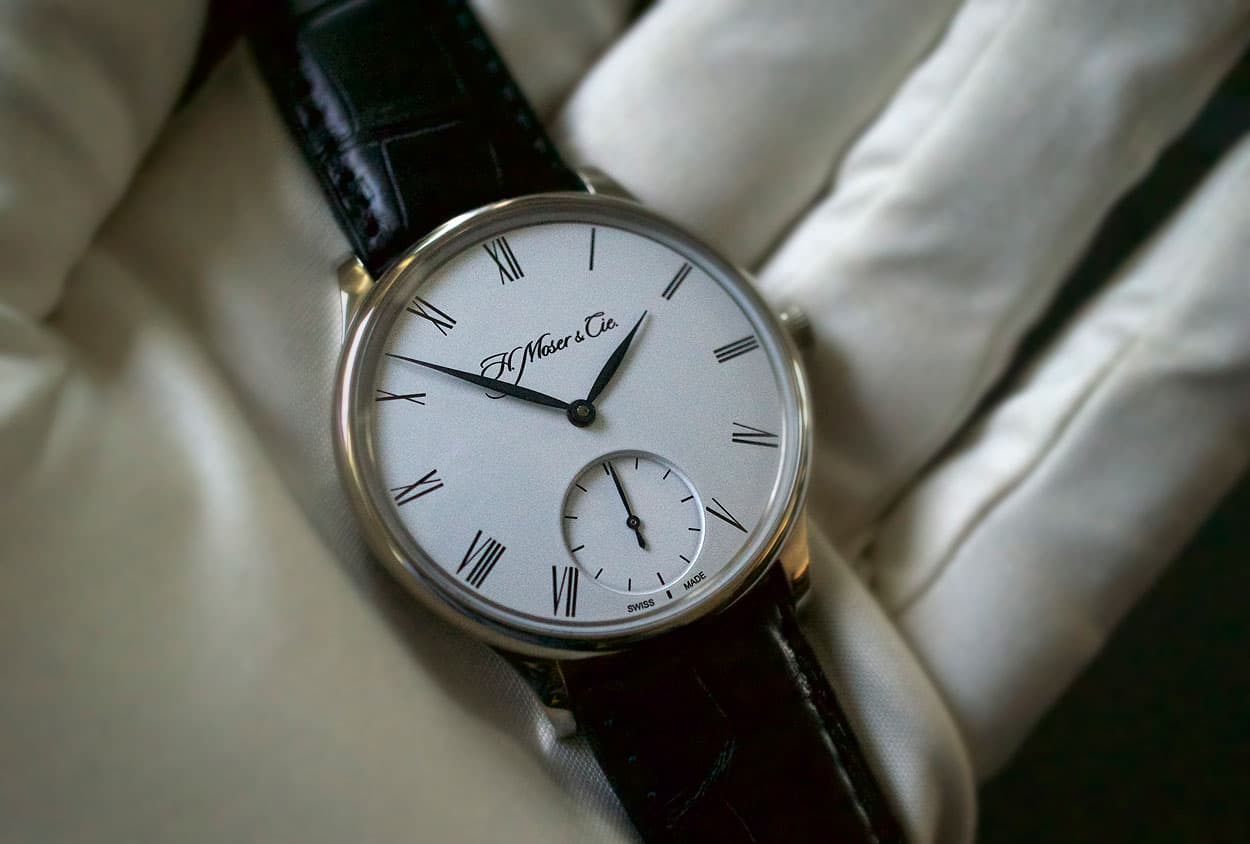 H. Moser & Cie also belongs to these smaller independent brands, that’s working hard on their collection and reputation and they’re often seen as one of those new and young independent brands as well. Independent YES, for sure! But new? Hmmm, not really actually. H. Moser & Cie is a very old company with a history that’s going back to 1928 when Heinrich Moser founded his company in St.Petersburg and produced clocks and pocket watches. It took until 1953 when the product line shifted from pocket- to wristwatches and the production was expanded in Le Locle. And while the company was a sleep for just a very short period, the brand has been producing time pieces during most of their life span. In the fifties the company was producing a wide collection of wrist- and pocket watches, that still can be found in good shape, but the production was fairly low. The brand was owned by the ‘Dixi Mechanique Group’  since 1979 and the production of mens watches moved slowly on until 2012, when Georges-Henri Meylan, former CEO of Audemars Piguet, bought the entire company.

Meylan did not just buy the brand as an investment, Meylan is a watch-man pure sang and his aim was to re-structure the collection and image of the brand, to bring H. Moser & Cie in to the top of Swiss Watchmaking. Together with his sons Edouard, CEO of H.Moser & Cie and Bertrand, who is CEO of MELB Asia, the distributor in Hong Kong, Henri Meylan has been able to stabilise the company and turn it into an exclusive brand of contemporary mens watches. H. Moser & Cie is still based in Schaffhausen, the city where its founder was born more than 200 years ago. 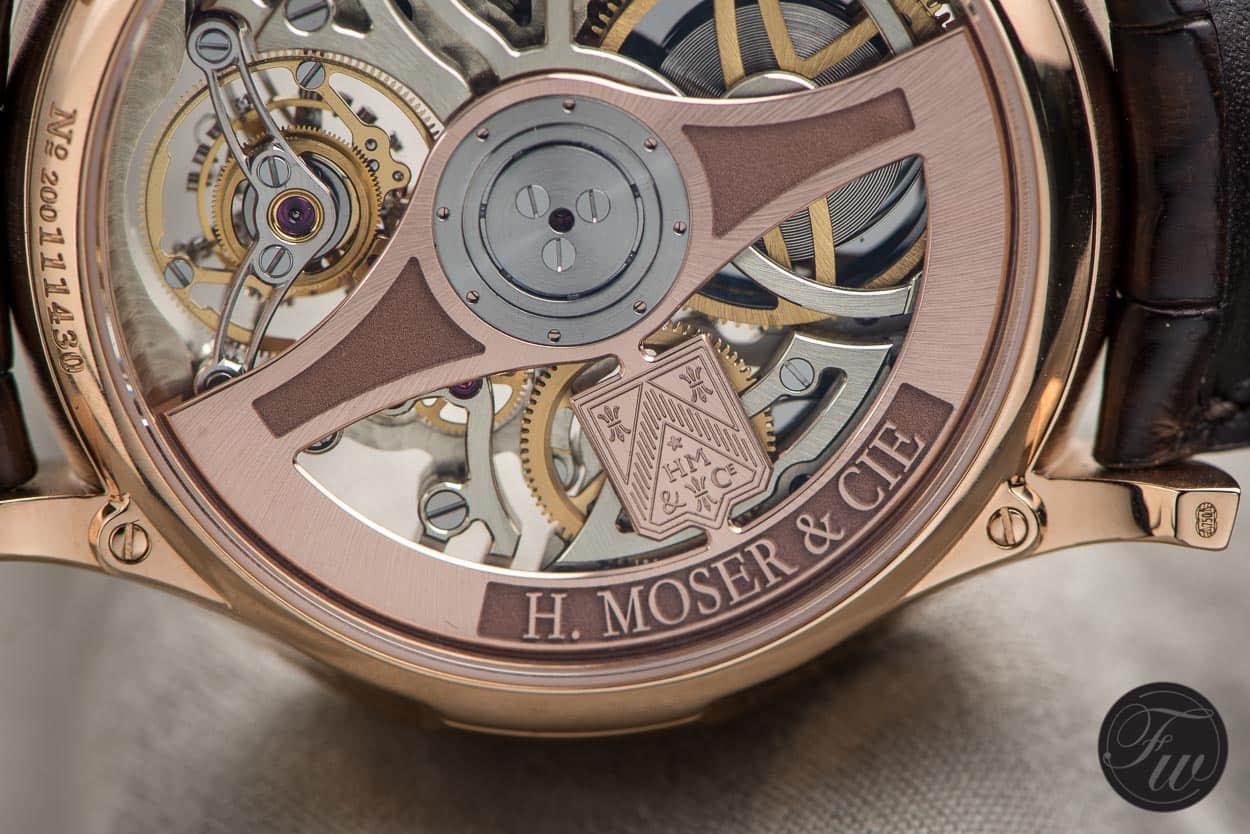 I visited their modern manufacture, from where the brand operates, that was build 10 years ago and gives room to a team of about 100 people. When walking through the various ateliers, it becomes clear that a lot of investments have been made since Meylan took over, to make the work flow as efficient as possible. H. Moser & Cie only uses only their own calibers, for their entire collection, from the HMC 341, used for the Perpetual Calendar Calibre to the HMC 802 that is powering the Venturer Tourbillon Dual Time. Even parts that are complicated to produce like the Straumann Hairsprings® are produced in house and have become their specialization. 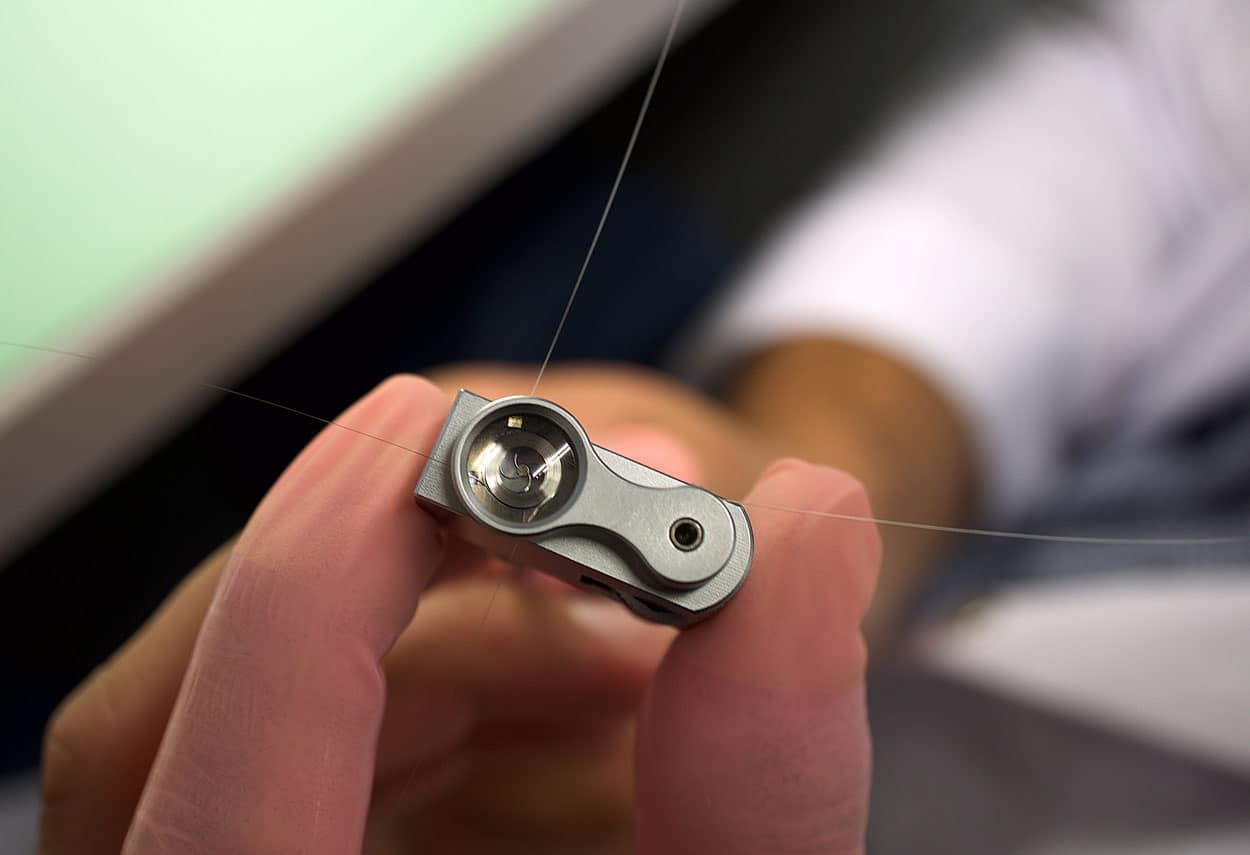 They are made here in their Schaffhausen manufacture, from special alloys, to ensure the highest precision and accuracy. These hairsprings are not just manufactured for their own collection of H. Moser & Cie watches; also other brands rely on these hairsprings, that are made to the precise specification of the brand in particular. Most of the parts Moser is using, like for instance escapement wheels and main plates are all manufactured here in this manufacture, while a few parts are obtained by other, but always, Swiss manufacturers. 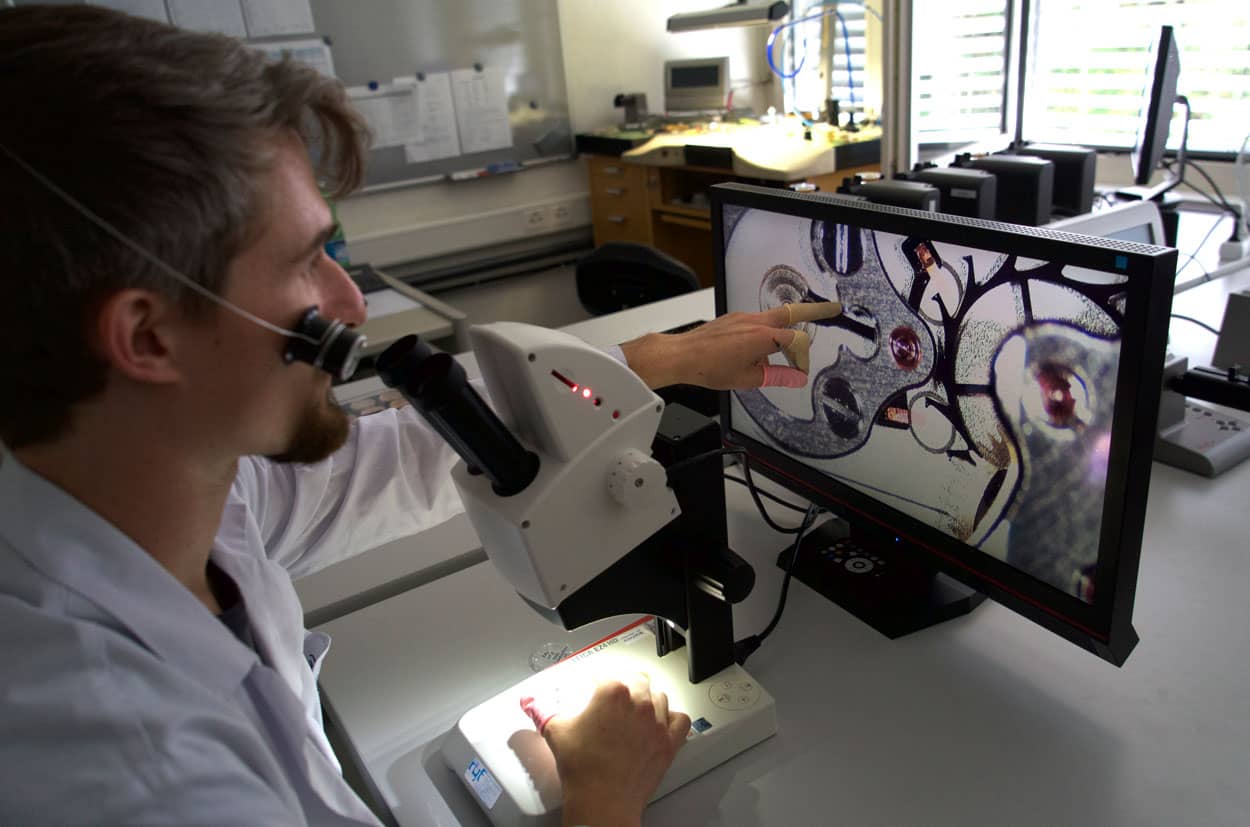 Pictured above a micro adjustment demonstration of an escapement pallet lever, under some serious magnification. 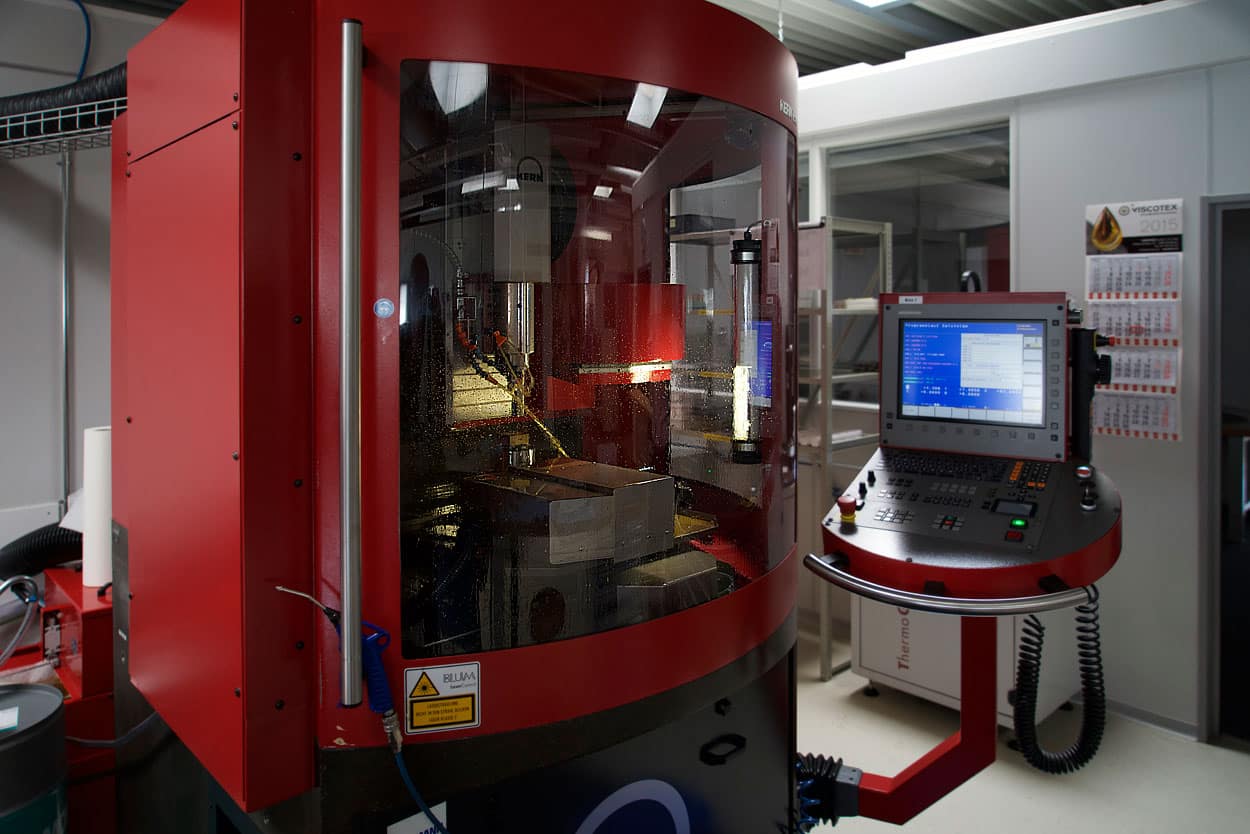 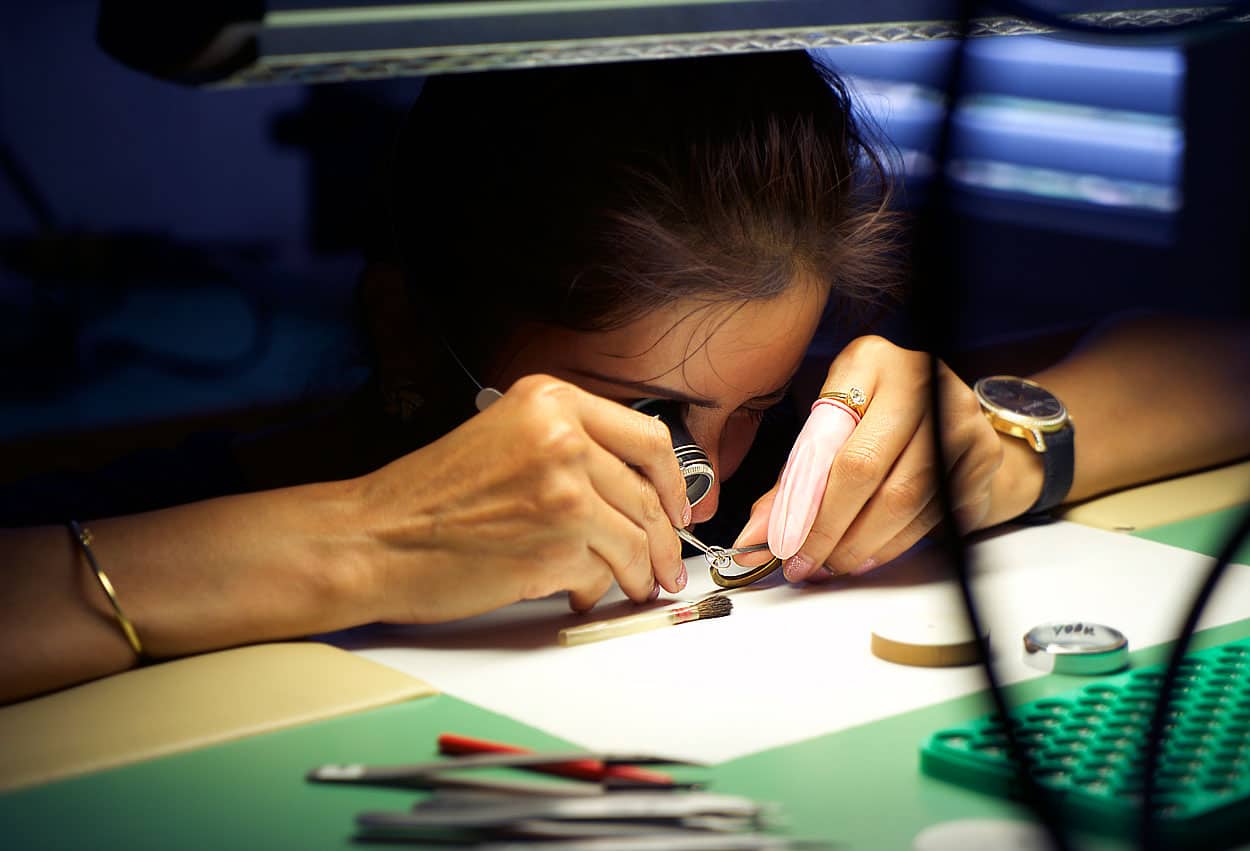 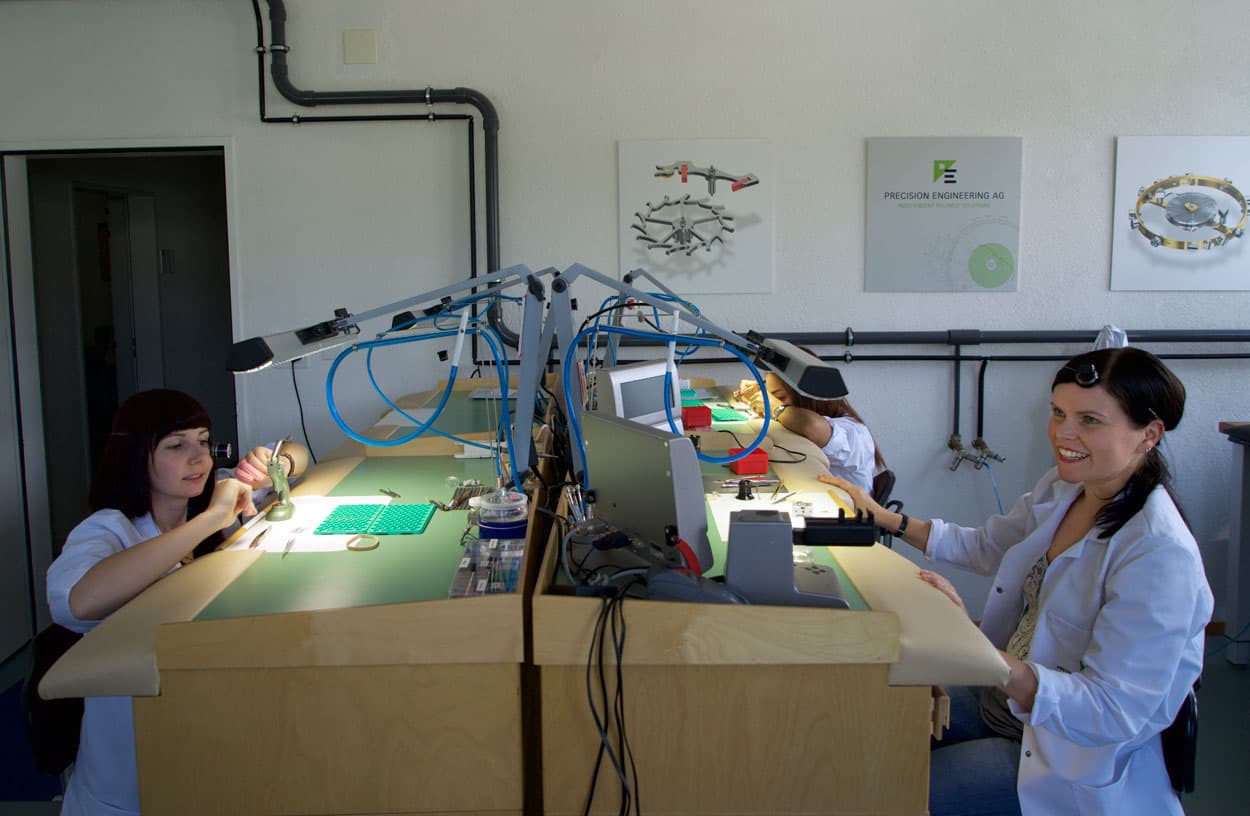 Time flies and it was almost time to get back to the airport, but not before we sat down for a while to look quickly at some pieces of the collection. Since it was the last day before the Manufacture was closing for their Summer breaks, the collection was not complete. H. Moser & Cie’s product line exists currently out of the ENDEAVOUR COLLECTION, with six different models and the VENTURER COLLECTION with two different models, the well known MAYU series is still there, but was re-named and is now part of the ENDEAVOUR Collection. 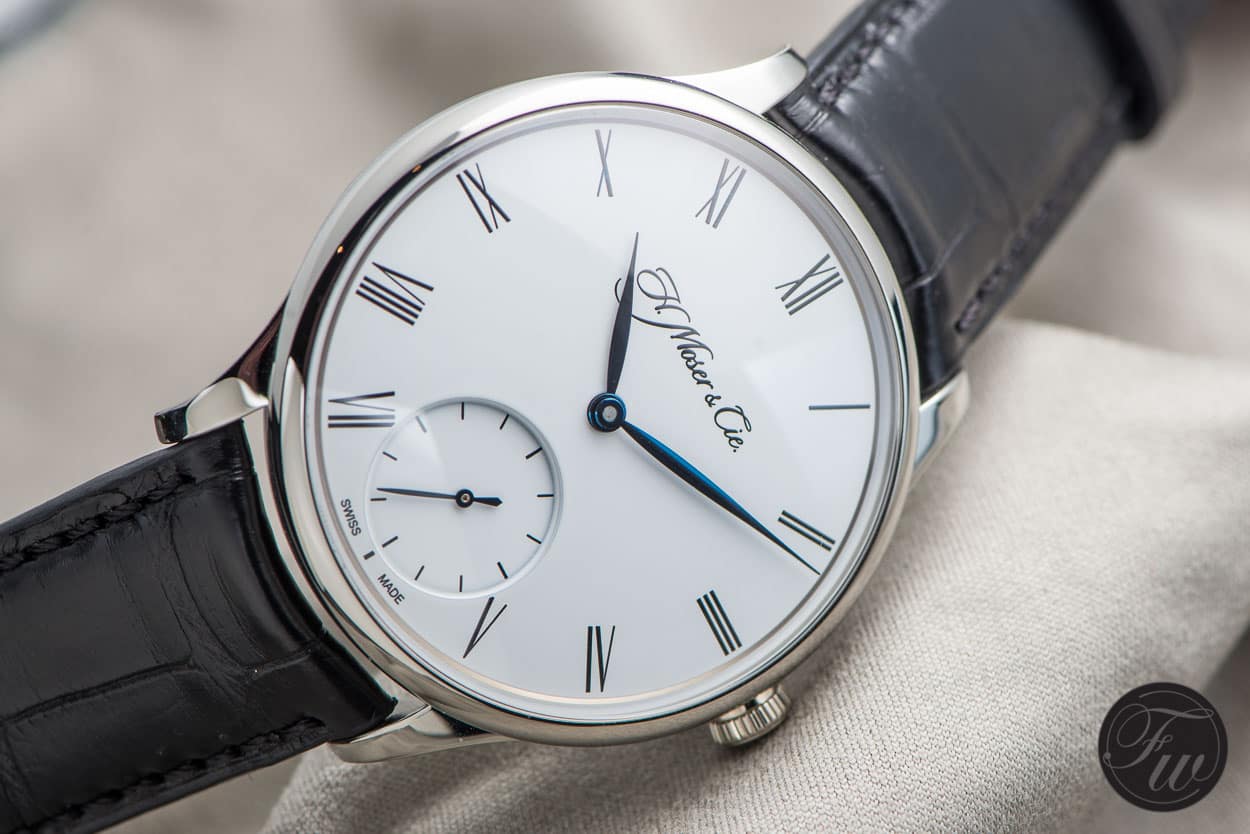 This year the ‘Venturer Classic’ was presented in Baselworld and although I am a huge fan of coloured dials, I was stunned when I saw this model. It is a very clean looking dress watch, with a petite seconde @ 6 and is quite an odd man out, in the collection, with that white enamel dial, blued hands and Roman numerals, since the combination Roman numerals & blued hands is not common at all, in the current line up. Roman numerals had been used already by Moser in the thirties for their pocket watches, but now a days it is safe to say that, from a visual point of view, the current collection is build on gold hands and applied gold markers on amazing coloured and fumé dials, that are only found at H. Moser & Cie. 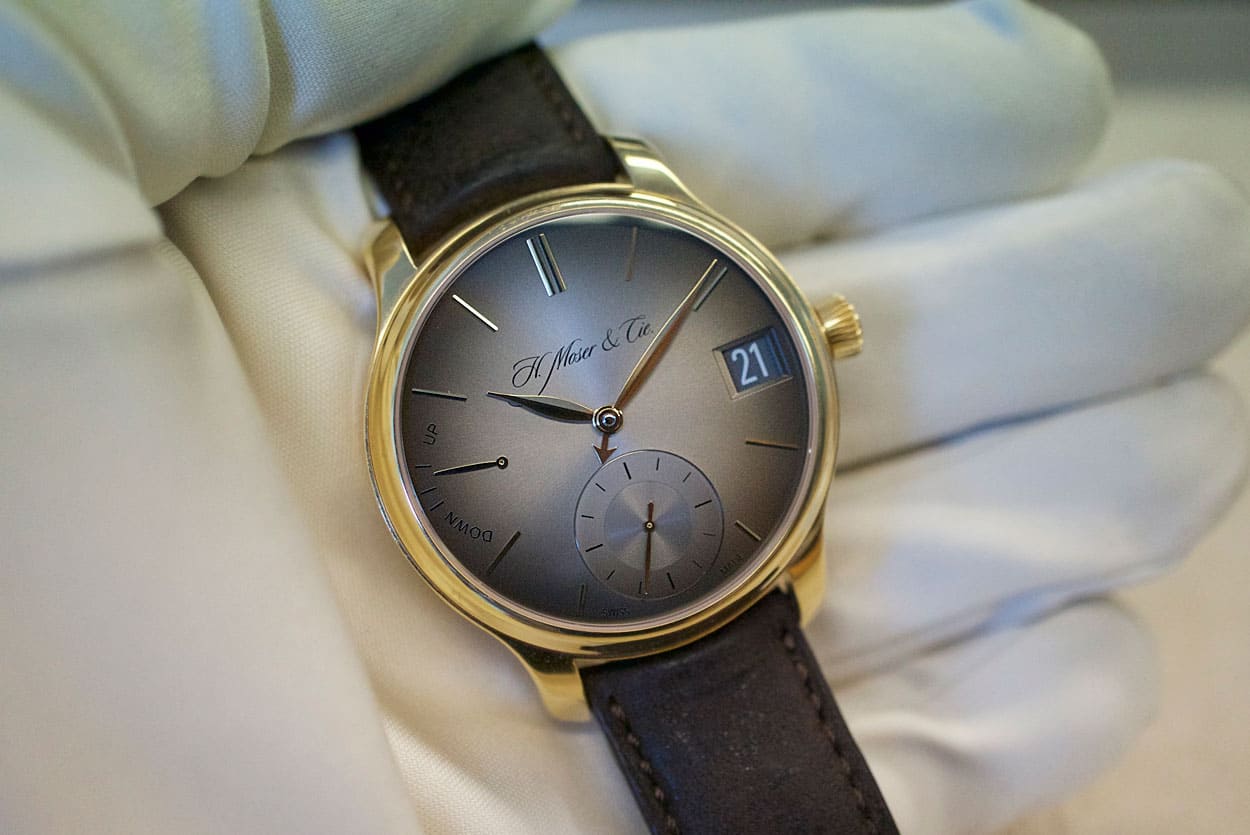 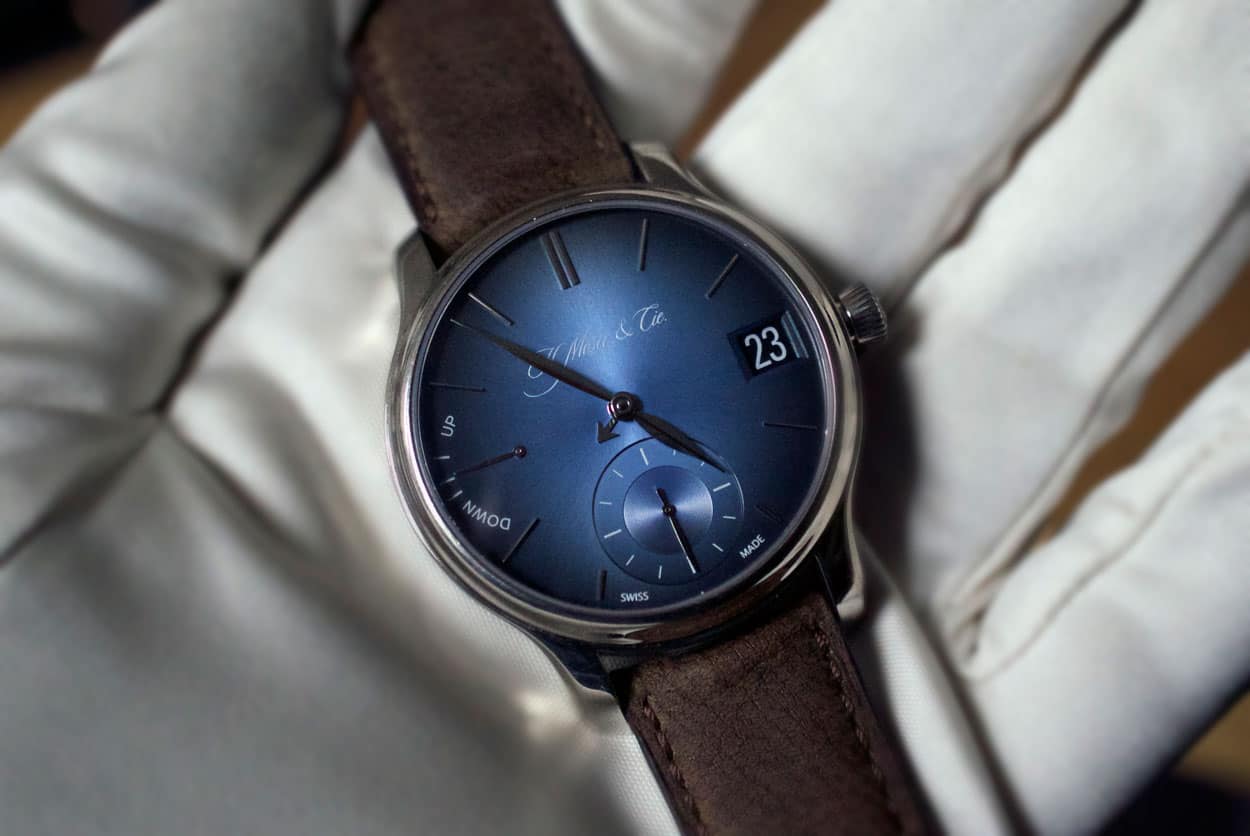 The Venturer models have an amazing curved crystal, not easy to photograph, but the pink gold model on my wrist, gives hopefully an idea. The ‘Endeavour Perpetual Calendar’ is probably the watch that gave H. Moser & Cie a lot of credit among collectors. With its minimalistic appearance it is a very different approach of what a perpetual calendar usually is. One likes it or dislikes it, there is no in between. You will soon find a full report on this unique watch on Fratello Watches. I saw the watches with the more traditional Fumé dial and with the new Funky blue Fumé dial and both were on the new and very sexy looking Kudo leather straps. Kudo is not often seen yet in the watch industry and personally I am glad that H. Moser & Cie steps away from the so common alligator leather straps. Kudo is a softer leather that wears very comfortable. 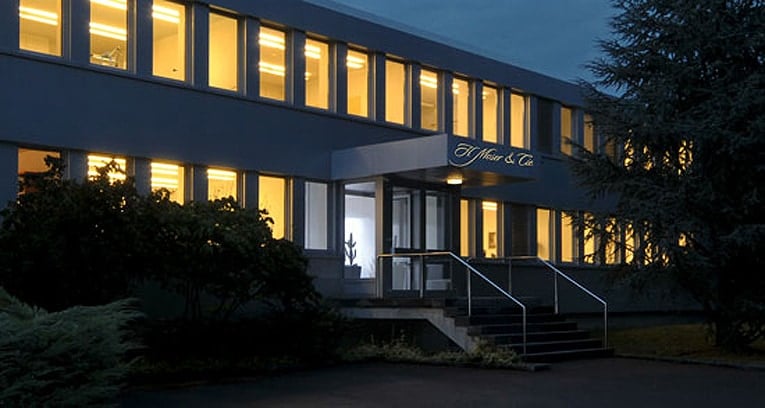 Unfortunately I could not see the ‘Endeavour Tourbillon Dual Time’ and the ‘Venturer Tourbillon Dual Time’. Because of the upcoming holidays, I mentioned earlier, both models were not available, but I hope to come back with an extensive article, about one the two. Since the Salon Haute Horlogerie, the SIHH in Geneva is not to far ahead, it is good to note that H. Moser & Cie will be presenting their entire collection (and their new Sports watch), for the first time, at this exclusive Salon.

More information can be found on H. Moser & Cie on-line