Getting Bubbly with the Tudor Black Bay SG Champagne Dial

Tudor brought two heavily praised stars to Baselworld 2018, the Black Bay GMT and the Black Bay Fifty-Eight.  We’ve covered those pieces over the last couple days and the response has been overwhelming.  What you probably haven’t noticed – and few have discussed it – is that the brand brought something else to the show that I quietly enjoyed.  It’s a bit polarizing, but that’s kind of how I like them.  Let’s take a brief look at the Tudor Black Bay SG Champagne Dial. 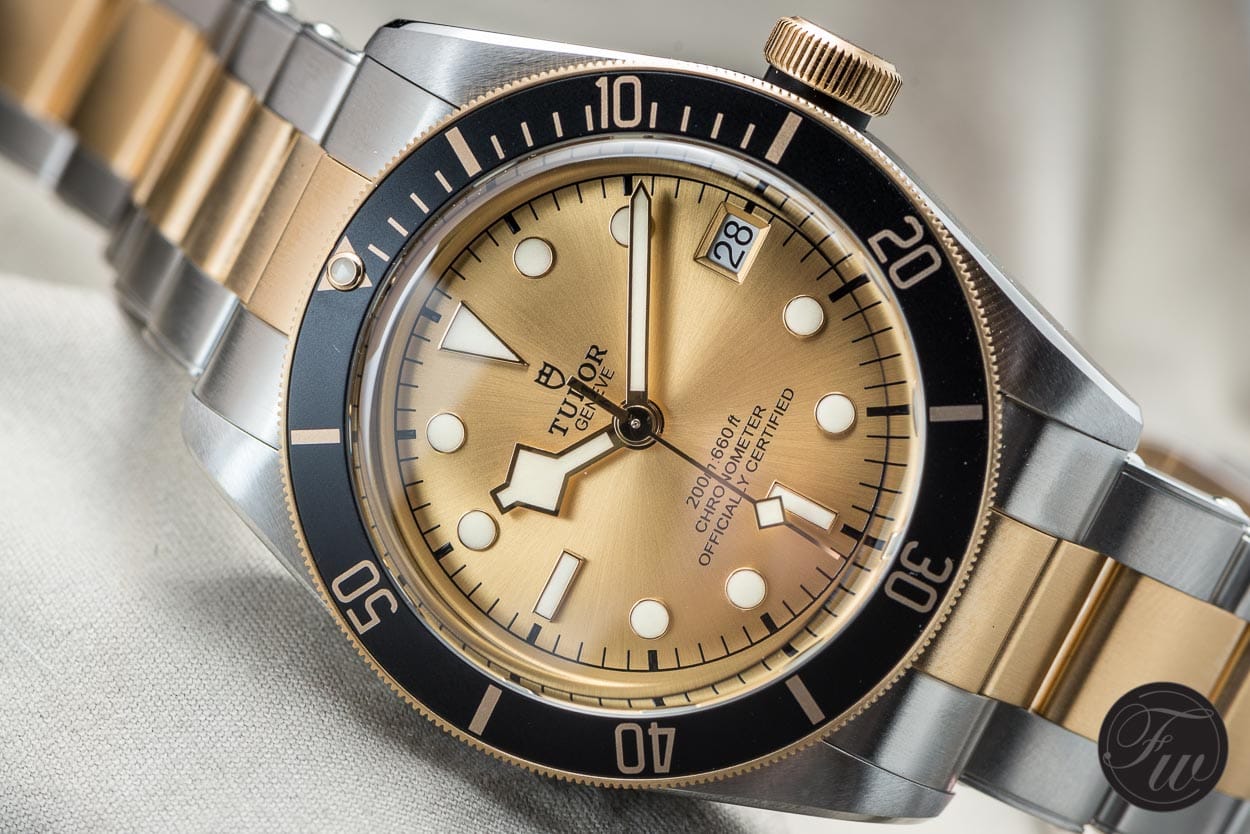 Last year, the more affordable brand within the Rolex stable brought us a two-tone Black Bay with black dial and bombarded us with David Beckham advertising.  The reaction to the watch was…interesting.  I’d characterize the watch as a bit of a slow boil, but it ultimately became a hit.  At first, you had the reluctant Gen X’ers such as myself who were still scarred from growing up during the time of Movado’s, Ebels and Rolex’s adorned with both metals, but who are aging to the point that the look has started to become nostalgic.  Then, you have the younger, hipper crowd that seemingly has no issues of accepting some of the yellow metal.  Whatever the case, the brand saw it fit to continue the trend with the introduction of the Tudor Black Bay SG Champagne Dial. 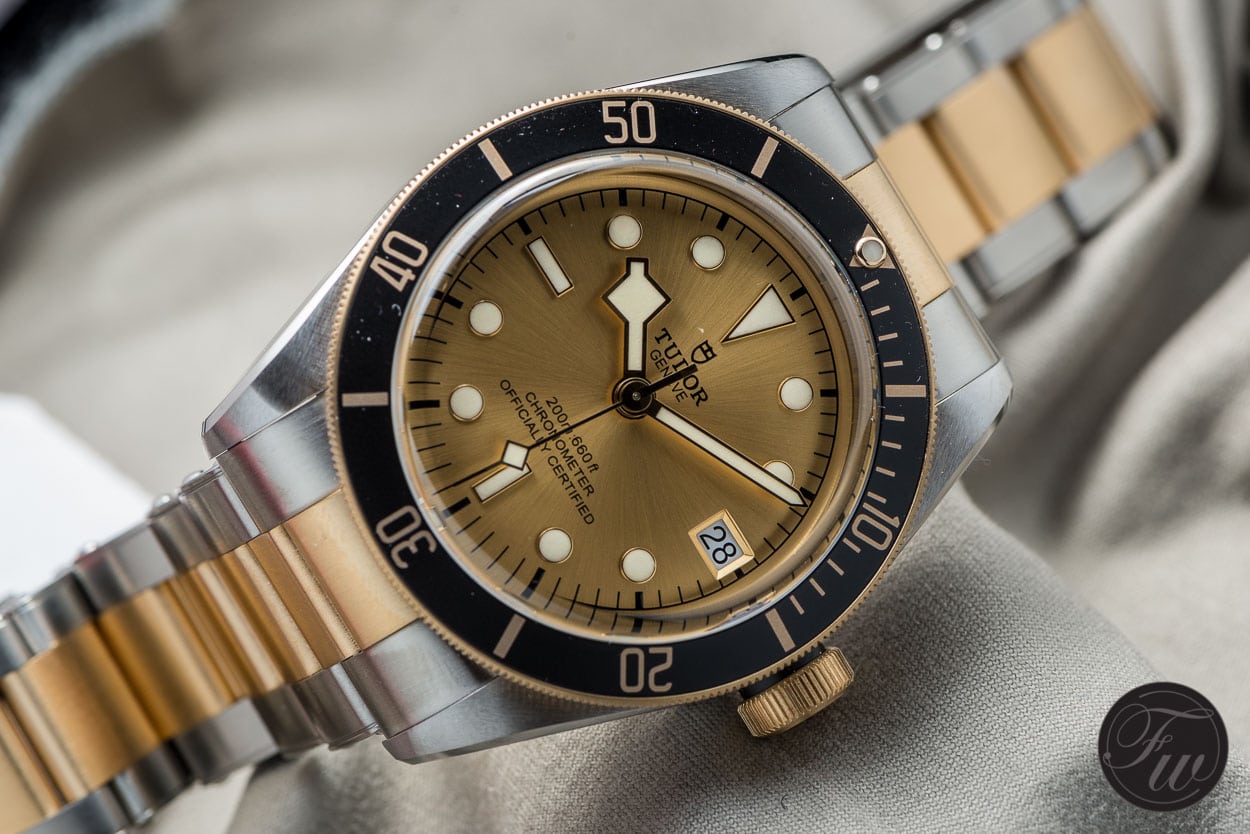 Now, watches with two-tone cases and black dials still express some level of toughness when applied to a tool watch.  Look to the Black Bay’s spiritual ancestor, the Rolex Submariner, and there are all kinds of vintage and current examples of bi-metal models with black dials.  With the new Tudor Black Bay SG Champagne Dial, we get a far more elegant version of the same watch with, you guessed it, a gold dial.  I did some looking and the only similar execution of a gold-dialed Rolex family diver is the fairly ornate “Serti” dial that includes gemstones for hour indices. 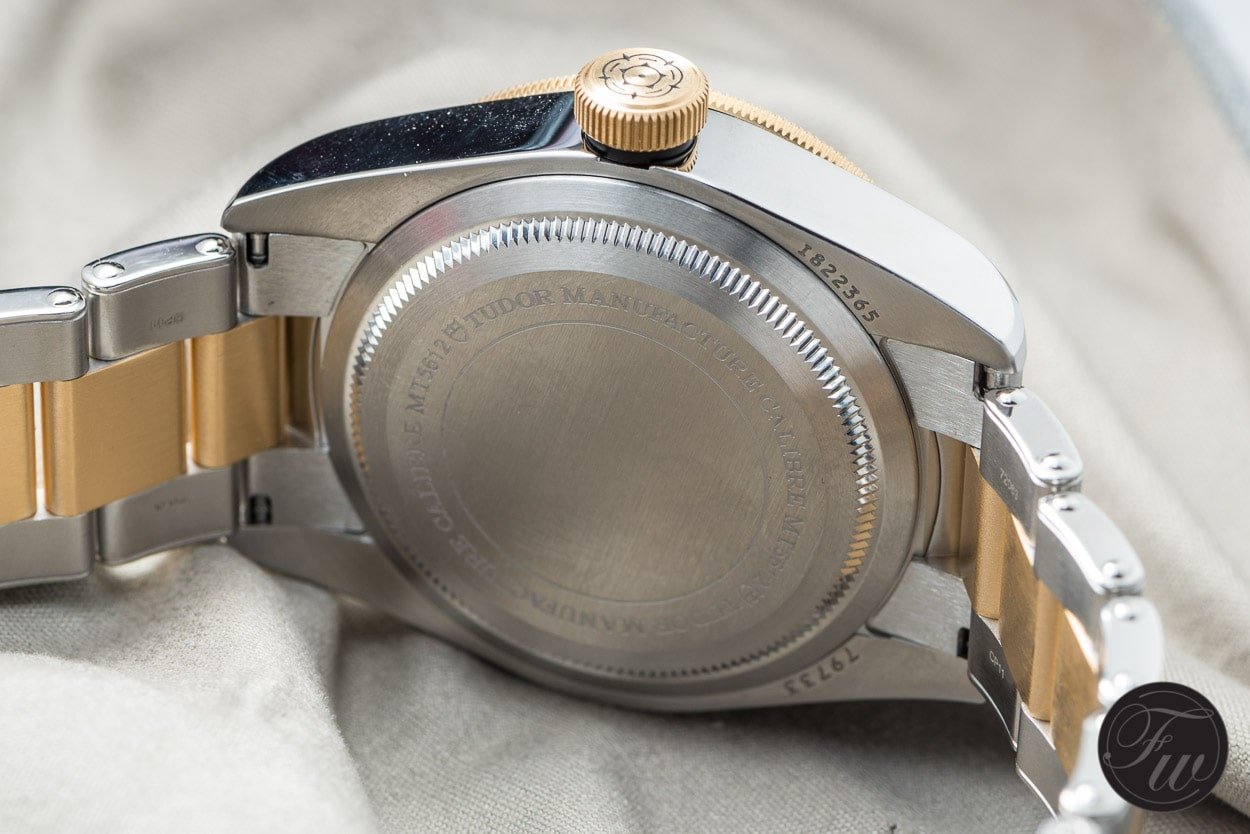 With the Tudor Black Bay SG Champagne Dial, we get a watch that’s very similar to last year’s black-dialed model, but this piece trades the “gilt” highlights on the dial for black printing.  Everything else remains the same and that means the same gold hands and index surrounds, gold-plated bezel and crown.  If chosen on bracelet, buyers get the same brushed and riveted oyster bracelet as on the black dial version with gold-plated center links.  In my opinion, it’s a damn good-looking watch that should appeal to both men and women. 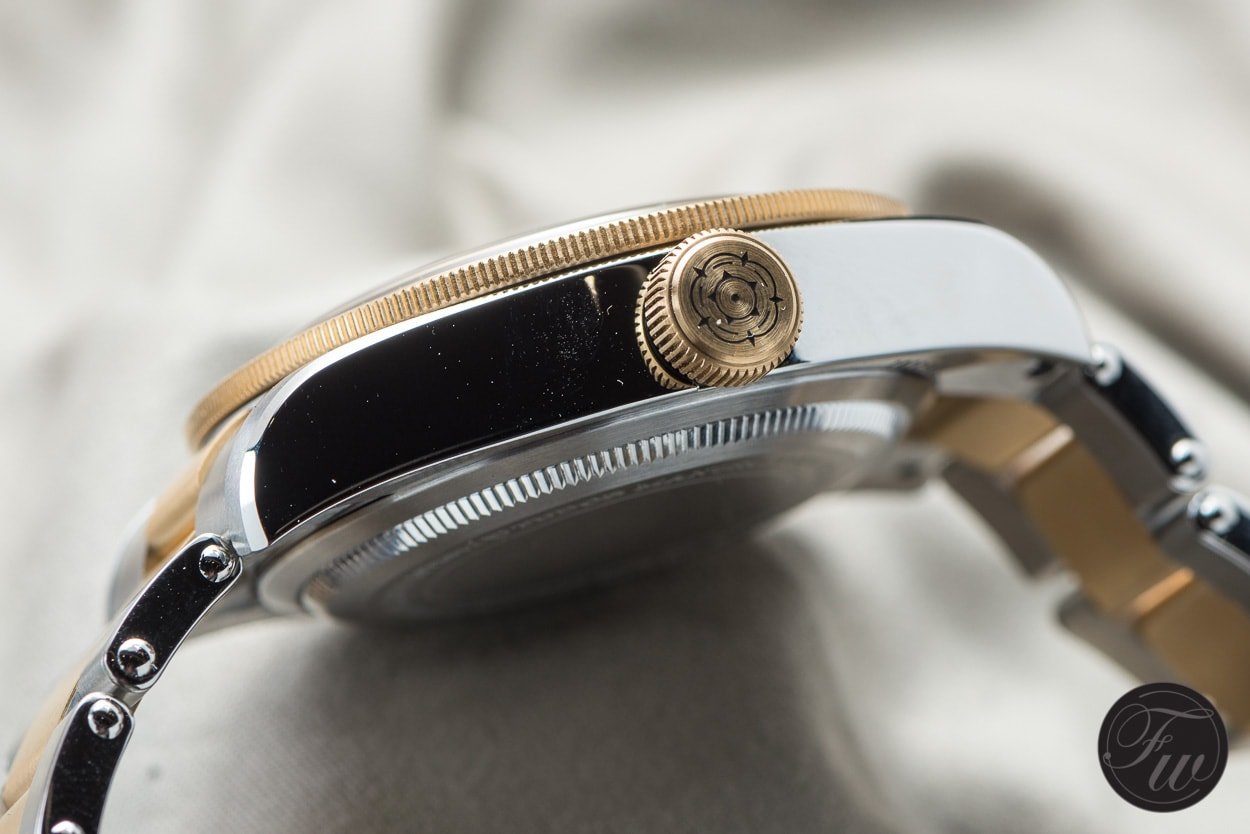 I mentioned the absolute lack of coverage the new Tudor Black Bay SG Champagne Dial has seen and that’s slightly odd considering the fact that Rolex dropped a new two-tone, Root Beer-bezeled (ok, let’s call it Espresso and Cappuccino) GMT Master 2 in either a solid gold or two-tone case.  Perhaps I should’ve picked up on the foreshadowing at the Tudor press release as very few grabbed this watch during the hands-on part of the agenda.  Still, as mentioned, I really liked the watch and perhaps this one will also grow in popularity over time.  More and more when I talk to collectors, it seems that 1980’s ubiquitous linen-colored Datejusts are pinging their radars – so you never know! 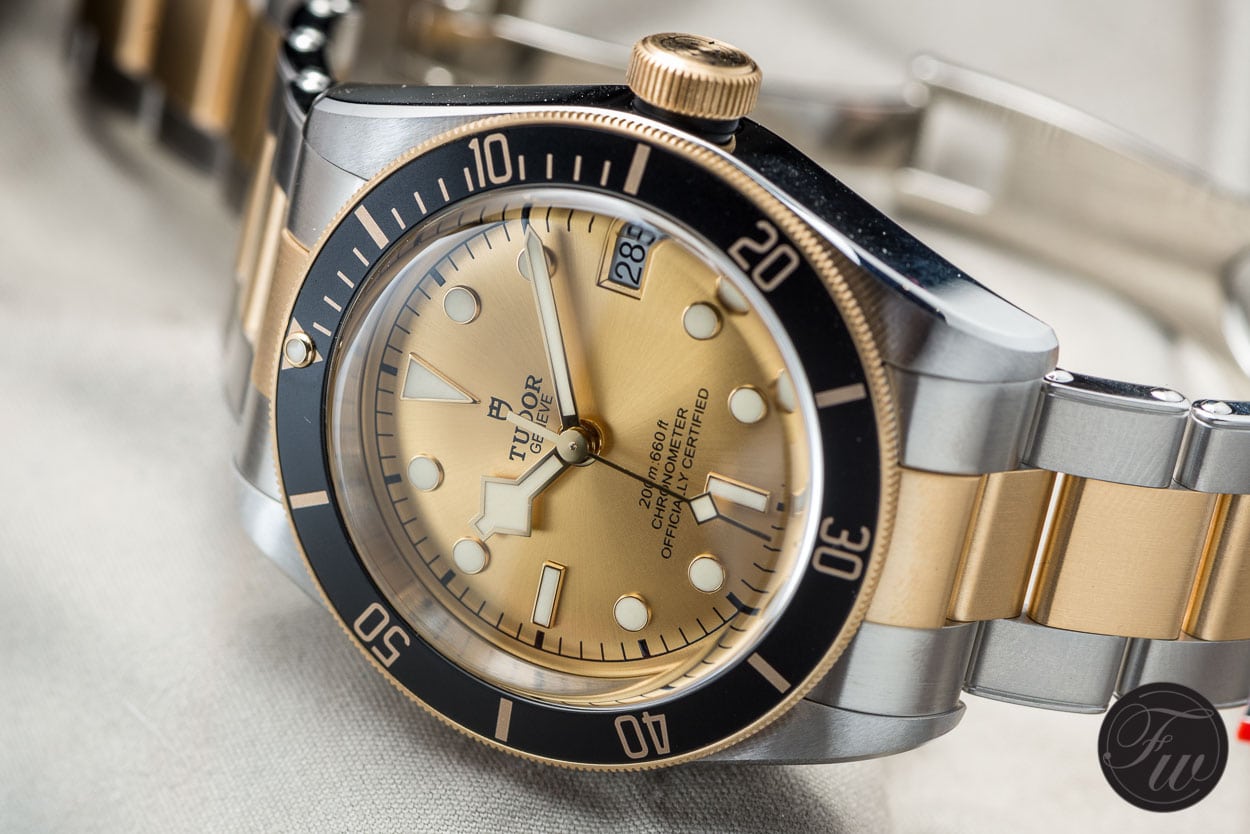 The Tudor Black Bay SG Champagne Dial will be priced at 4650 Euros on bracelet and 3530 Euros on leather strap when it hits the market.  Call it yet another Black Bay variant if you’d like, but I’m happy to pop a cork over this one.  😉 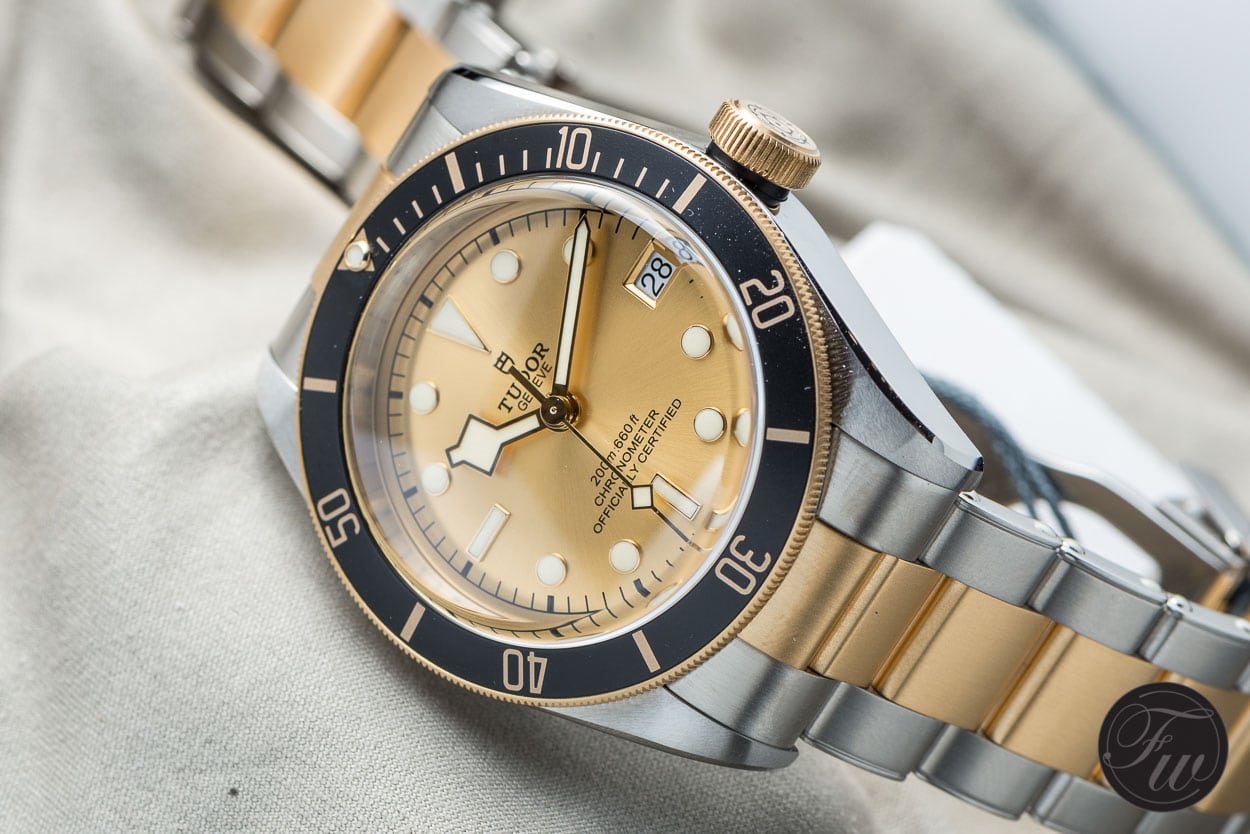