It’s time for another installment of Two for Tuesdays where we compare a couple potential purchase choices. This week, we’ll talk about the Tudor Black Bay 36 versus a neo-vintage Rolex Explorer.

Back in 2018, I penned an article on the newly announced Tudor Black Bay 36. Specifically, the blue model was new and it joined a black dial edition that had been on the market for two years. I really liked it and spent a paragraph within the article comparing it to a neo-vintage 36mm Rolex Explorer. At that time, the price difference was within about €1,000. My how things have changed over the last two years. However, that’s not why we’re here. I wanted to write this comparison for the simple reason that I think it’s an appropriate time to look at a pair of classy, not too showy watches that work for just about any occasion. 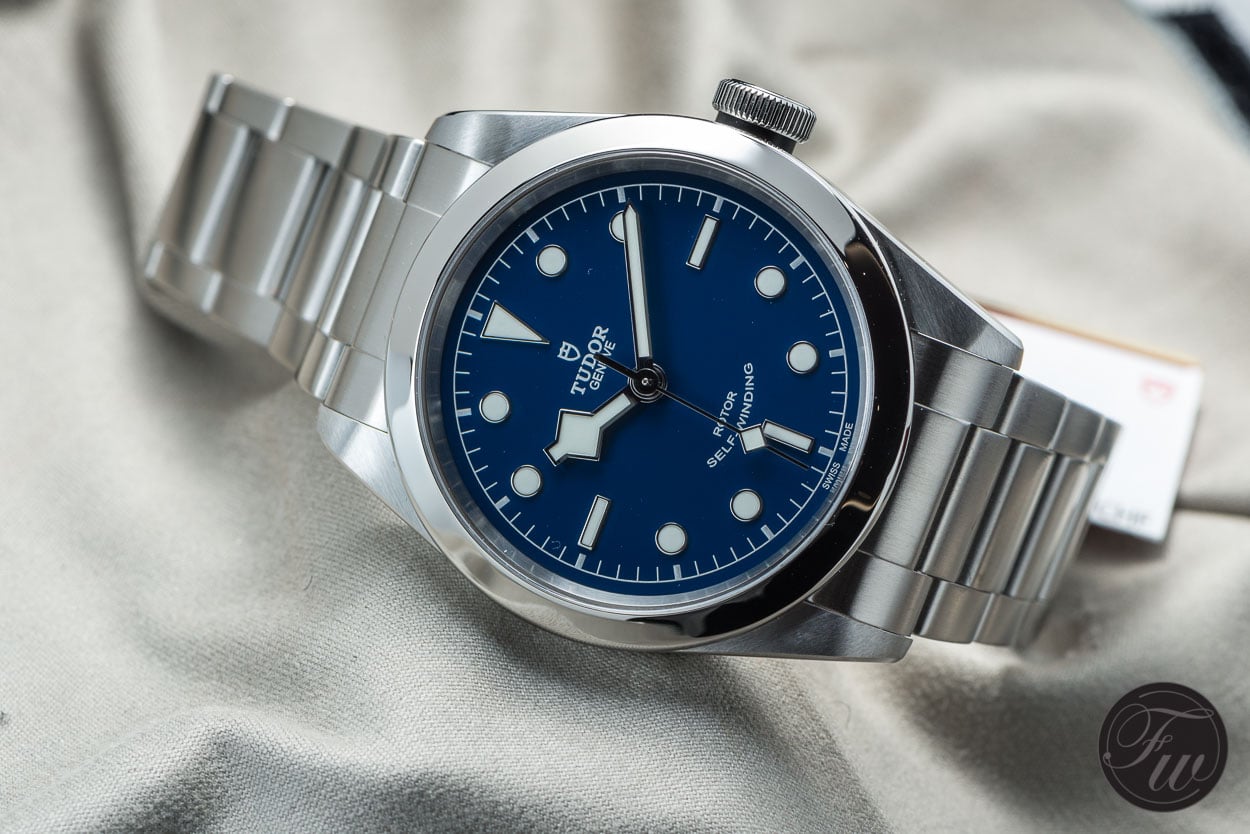 The Tudor Black Bay 36 first came to light all the way back in 2016 at Baselworld. It was part of a strategy to help expand the Black Bay to models without rotating bezels. It was kind of an odd move. I say that because Tudor gave us the Ranger, a somewhat similar albeit larger take on the field watch. Proportionally, that watch was a mess and it has unceremoniously disappreared.

So, there we were in the friendly confines of Baselworld staring at this 36mm Black Bay that looked an awful lot like a watch that so many of us missed: the 36mm Rolex Explorer. Except with Tudor, the watch brought in a bunch of styling traits consistent with the Black Bay diving lineup. 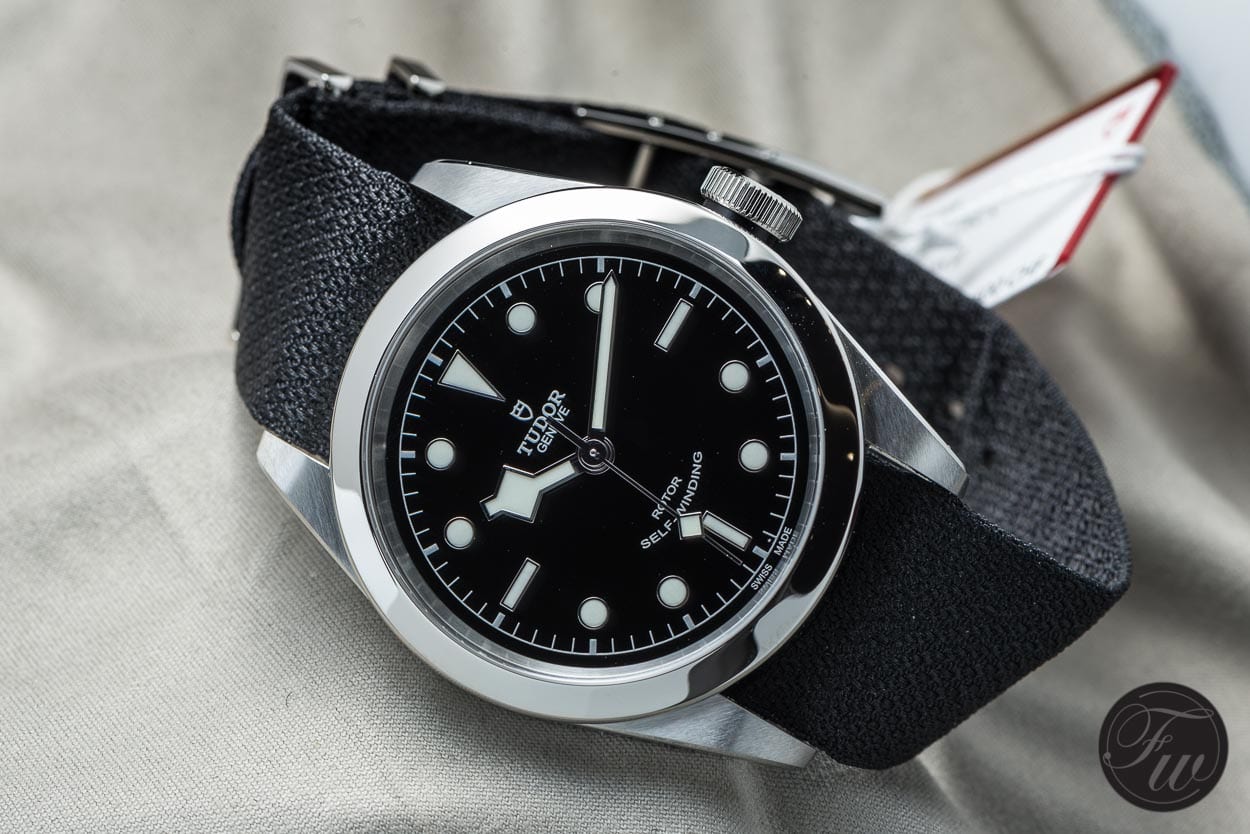 A Black Bay in Explorer clothing

The Tudor Black Bay 36 enjoys such typical traits as a snowflake hand, controversial round indices, and a crown tube that enjoys showing itself to the world with a ring of color. It also adds a chapter ring that’s reminiscent of early gilt dial Rolex and Tudor sports watches. The watches come in at 44mm lug to lug and 10.5mm of thickness with semi inconvenient 19mm lugs. A screw-down crown, screw-in case back, and sapphire crystal all work in concert to provide 150 meters of water resistance. Tudor has offered the blue and black stainless models (there are two tone editions) on an Oyster style bracelet or a variety of straps. 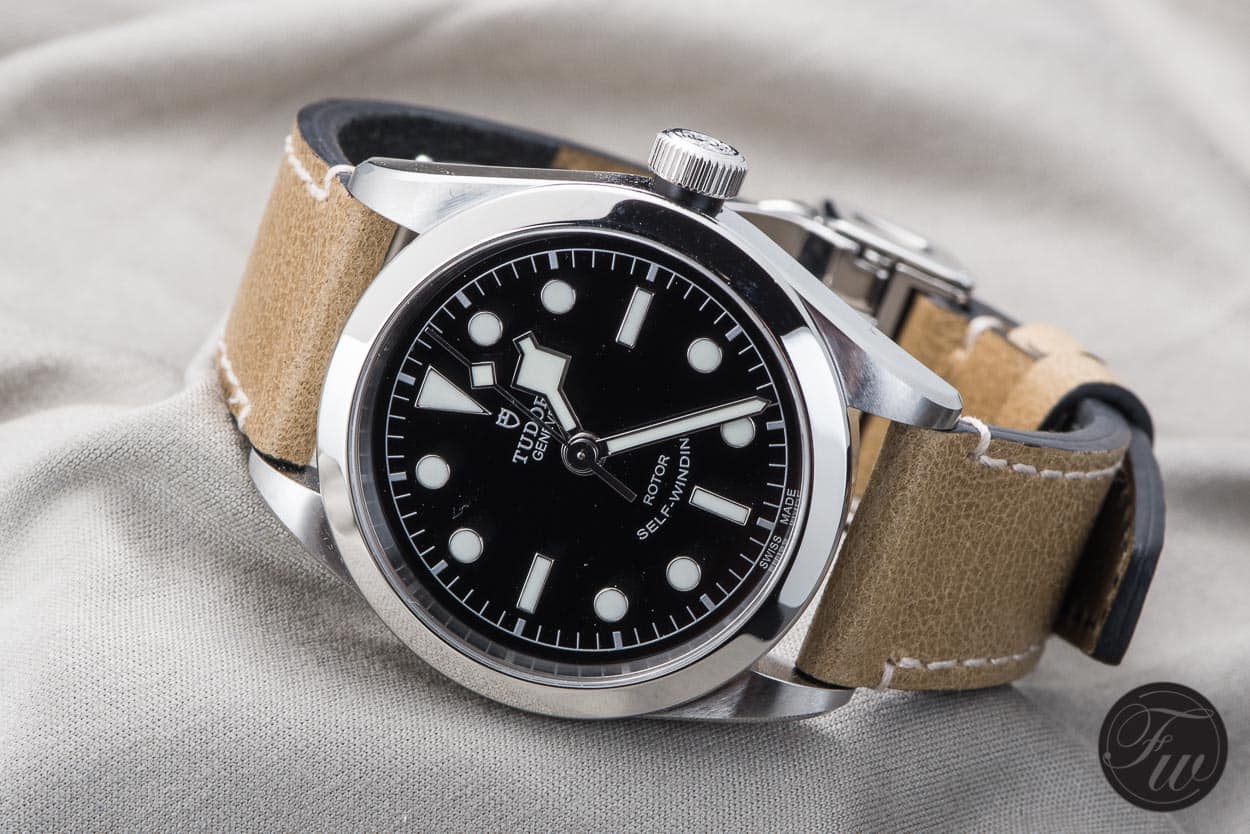 Seriously affordable with a reliable movement

With a price of just €2,670 on a bracelet, it’s not surprising that the watch makes do with a third-party movement. In this case, it’s the tried and true ETA 2824 automatic. It hacks and cracks along at a brisk 28,8000vph. As we’ve always said, the 2824 might not have the wow factor of in-house, but it runs reliably and it’s easy to fix.

As time has moved forward and I’ve had a much longer period to study the Tudor Black Bay 36, I’ve come away with some findings. First of all, it’s a really solid watch for the price and you’re really getting a piece that has a form factor that’s so close to a 36mm Rolex. That means something in the way it used to mean something to close the door on a high-end German sedan. Whether it’s a watch or the car, they feel as if they were hewn from a solid piece of steel. That’s somehow really comforting. Tudor has managed to achieve that strangely difficult feeling of quality that only comes when a watch head and bracelet are truly meant for each other. It’s the kind of feeling that makes an owner endlessly postpone putting the watch on a strap. 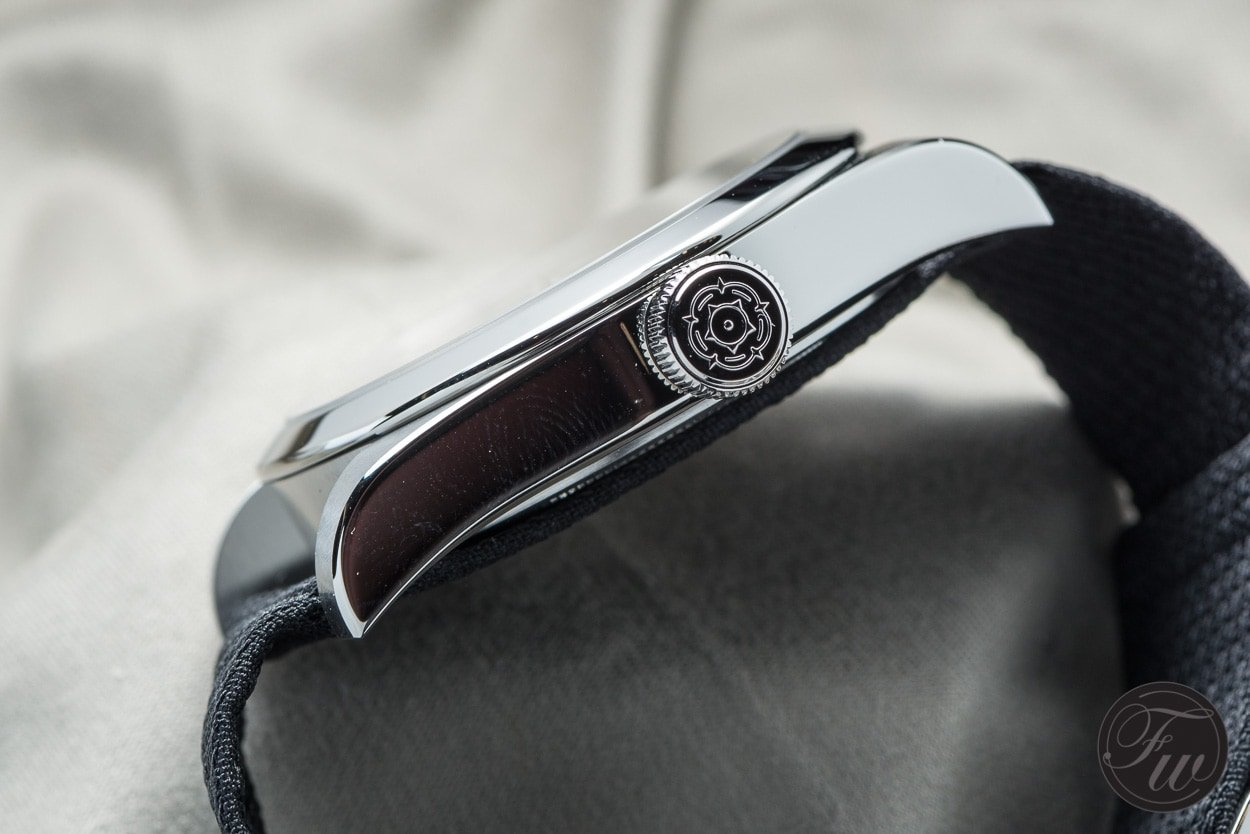 But not everything is perfect in Black Bay 36 land. I think that Tudor made a conscious choice to give this watch 19mm lugs for a couple of reasons. First, maybe they didn’t want to ape Rolex so directly. Second, and maybe more relevant, the 19mm lugs actually make the case look smaller and, probably, more appealing to both sexes. The 1mm difference doesn’t look so substantial in pictures, but I can tell you that it is noticeable in person. I’d go as far to say that it actually requires a try-on versus a blind purchase if you’ve only ever worn a 36mm Rolex.

There are two other things I’m not in love with on the Black Bay 36. The first is the bracelet clasp. It’s not bad and it’s certainly not massive like so many others on the market. But for as good as the links are, the clasp just doesn’t quite feel up to the same snuff. The flip-lock opens too easily in my book and that brings in a lower cost feel. The other thing I don’t love is the dial. No, I don’t really care about round markers and snowflakes. I’ve actually never liked the gloss on these dials. There’s just something a bit cut-rate going here, but it’s not overwhelming. 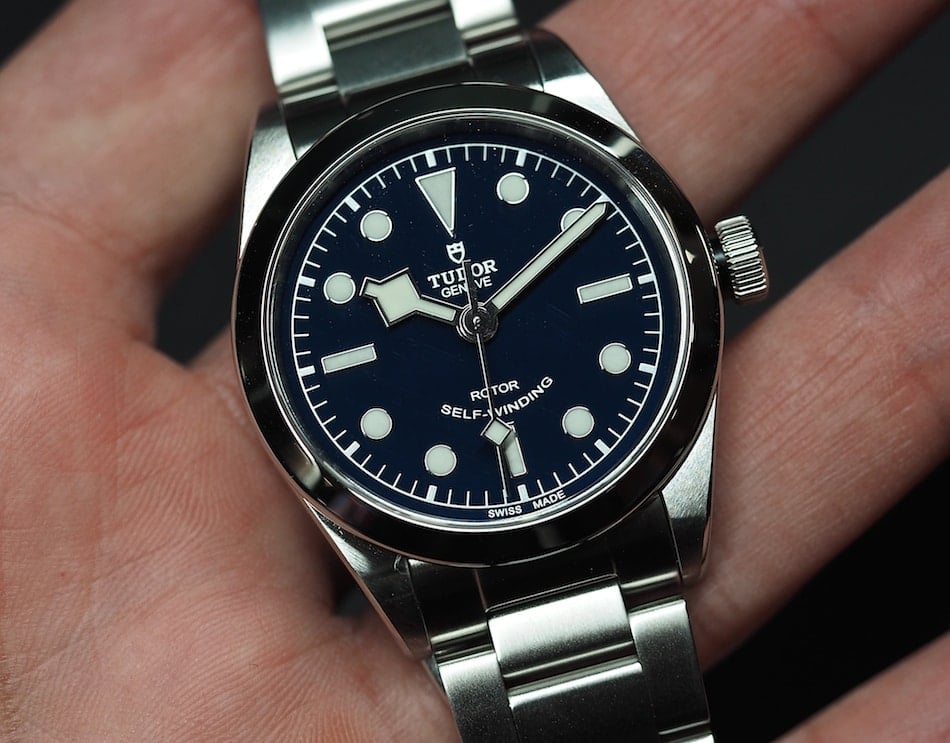 In the end, a seriously cool watch for everyday

But there are plenty of good things about the Black Bay 36. We mentioned the price, but I will mention it again. Despite the fact that Tudor, and therefore Rolex, seem intent on distancing both brands from each, the relationship is there. The Black Bay 36 definitely holds more than a passing resemblance to Rolex models and it’s the only brand that can do it credibly. I also like that it is a true daily watch that can hold its own underwater. Really, if you’re looking for one watch that should prove reliable and can do it all at a decent price, this isn’t a bad place to settle if the size works for you. 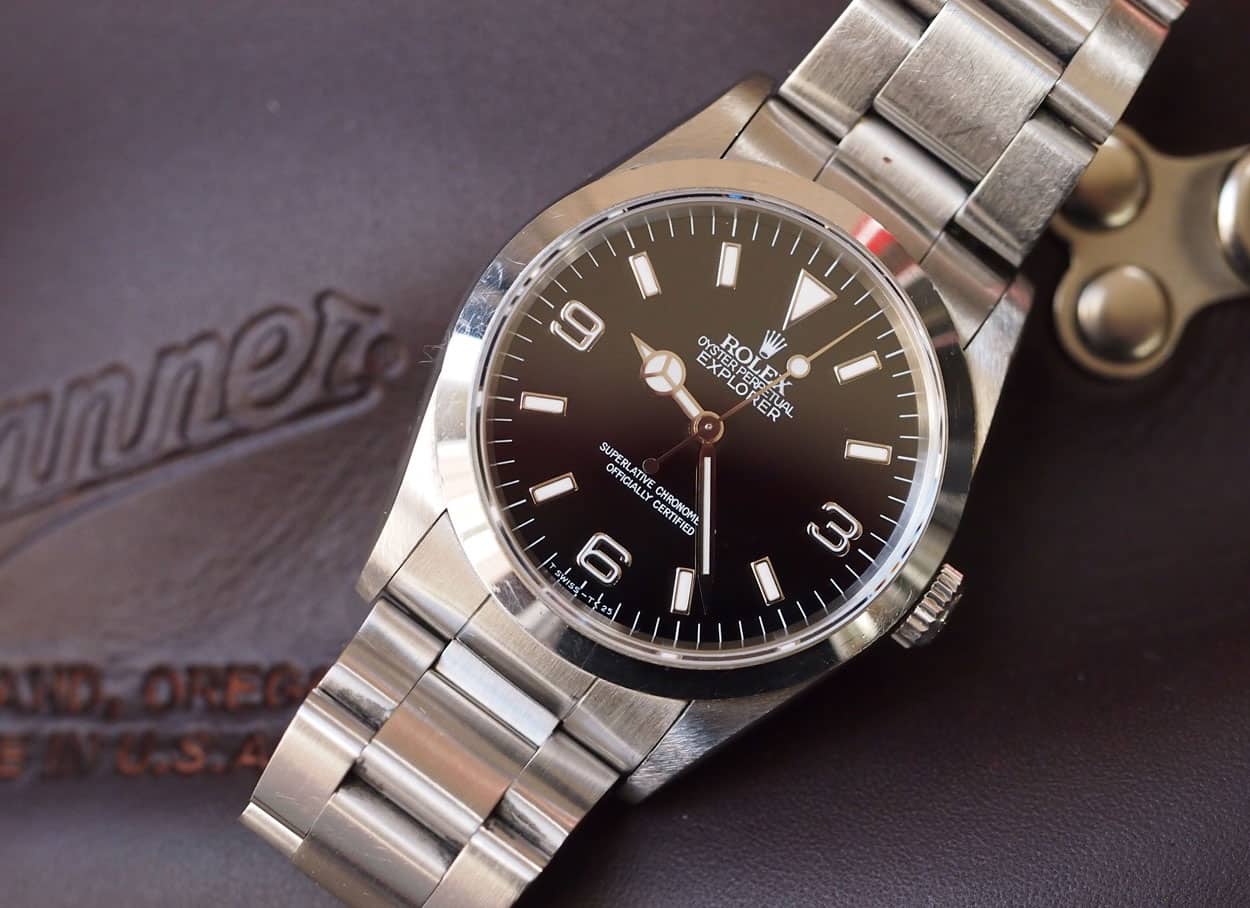 And “ok” is the operative word. Finding a really nice example of a 14270 or 114270 is not always a walk in the park. If you snare one in top-drawer condition, expect to pay even more. If you’re able to corral one towards the lower end of pricing, don’t forget to factor in a (potentially expensive) service to get it up to shape.

If you’ve read my articles for long enough, you know that the original 14270 is hands-down one of my favorite watches. It was my “only watch” (shudder) for nearly thirteen years and I still love wearing it. In fact, I just recently had it serviced and I really missed it during its absence! Design-wise, these 36mm Explorers still look seriously current. Plus, they’re truly more wearable than, say, a Submariner and they fly under the radar as much as any Oyster bracelet equipped Rolex can. 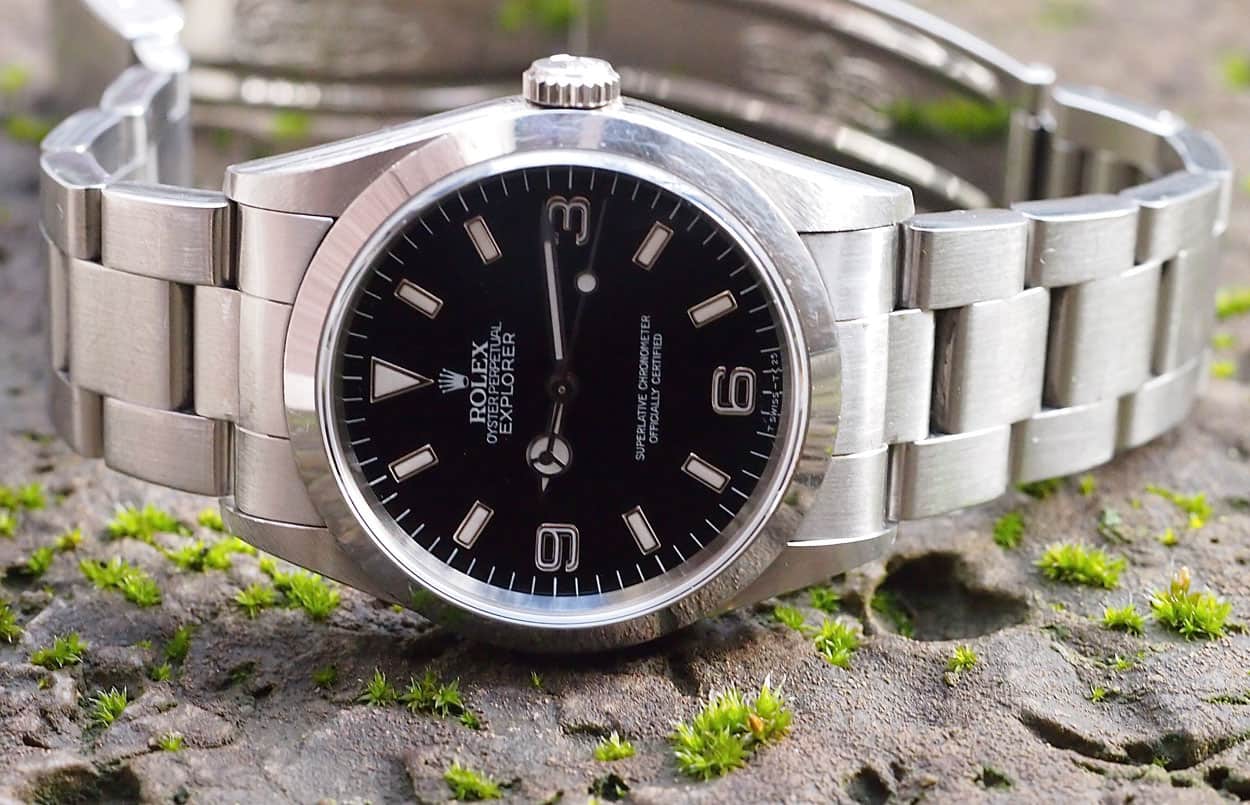 Where the Explorer has it in spades over the Black Bay 36 pertains to its dial and hands layout. The Tudor looks clean and unfussy — especially in black — but the Rolex just exudes class. Those famous Arabic numerals at 3, 6, and 9 pair perfectly with the Mercedes hand and the rest of the indices. And the glossy dial? For some reason, I like it a bit more here.

The entire thing comes together perfectly on the 36mm Rolex Explorer with sublimely weighted dial proportions and a lack of useless fluff. A simple screw-down crown is the only thing that breaks the symmetry. Interestingly, the Explorer is thicker than the Black Bay 36 by 1mm at 11.5mm. The lug to lug is similar at 43.6mm and the lugs are a friendly and beefy 20mm. If you’re looking at an early 14270, a simple folding clasp came with the solid link Oyster. This transitioned into the Flip Lock with secondary safety by the late 1990s. Similarly, stamped end links on the 14270 changed to solid, length extending end links with the 114270. 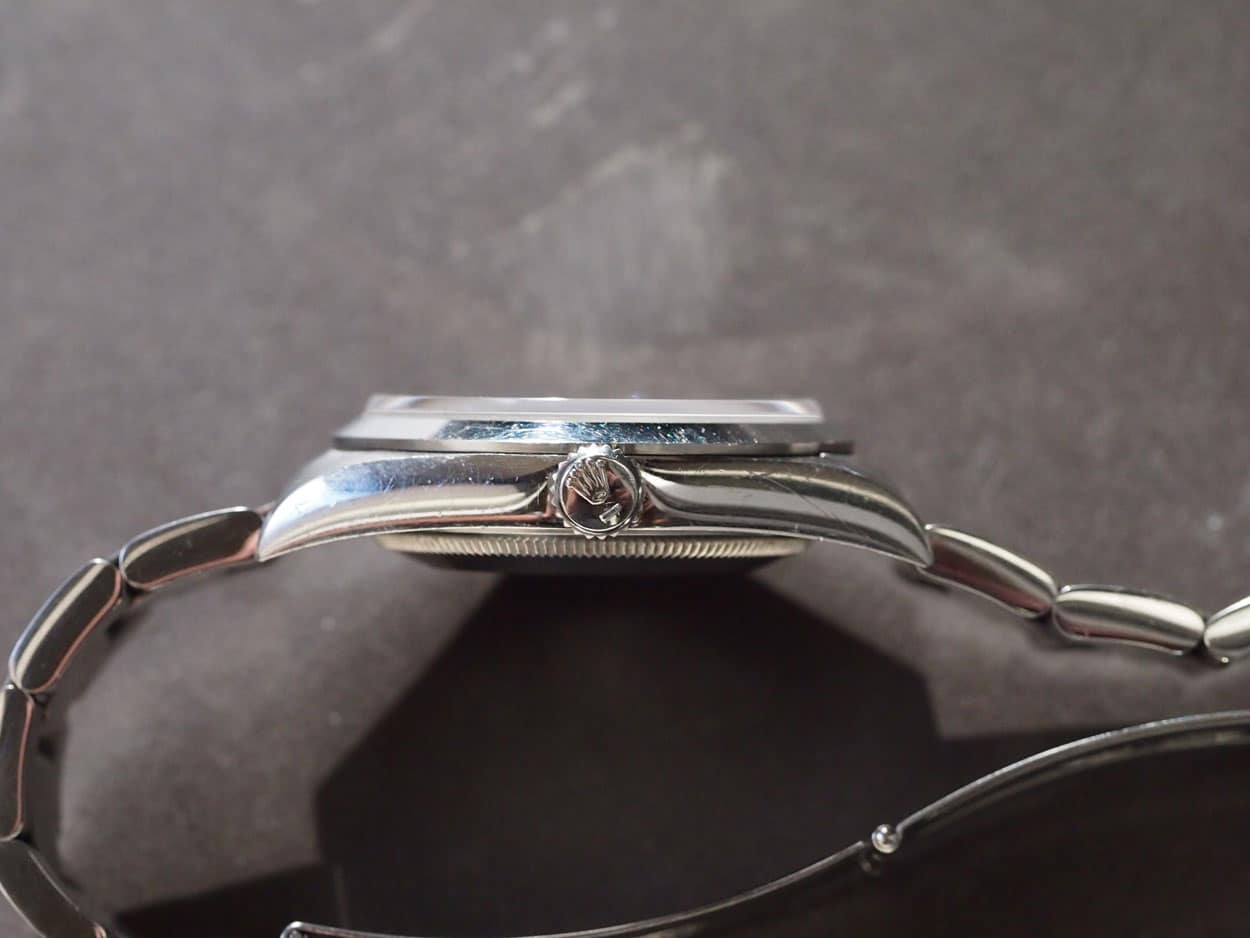 Honestly, it’s hard for me to criticize a neo-vintage Rolex Explorer. There’s so little to complain about with such a clean, timeless design. However, some dislike the caliber 3000 automatic in the 14270, but I’ve never had a problem. That being said, the 3130 in the 114270 is a far more modern and advanced power plant. I’d guess that the biggest complaints about these smaller Explorers relate to their bracelets. Some people simply dislike stamped clasps and end links. The other complaint is that the Explorer is technically the same as any other 36mm steel Rolex from the era with a different dial. 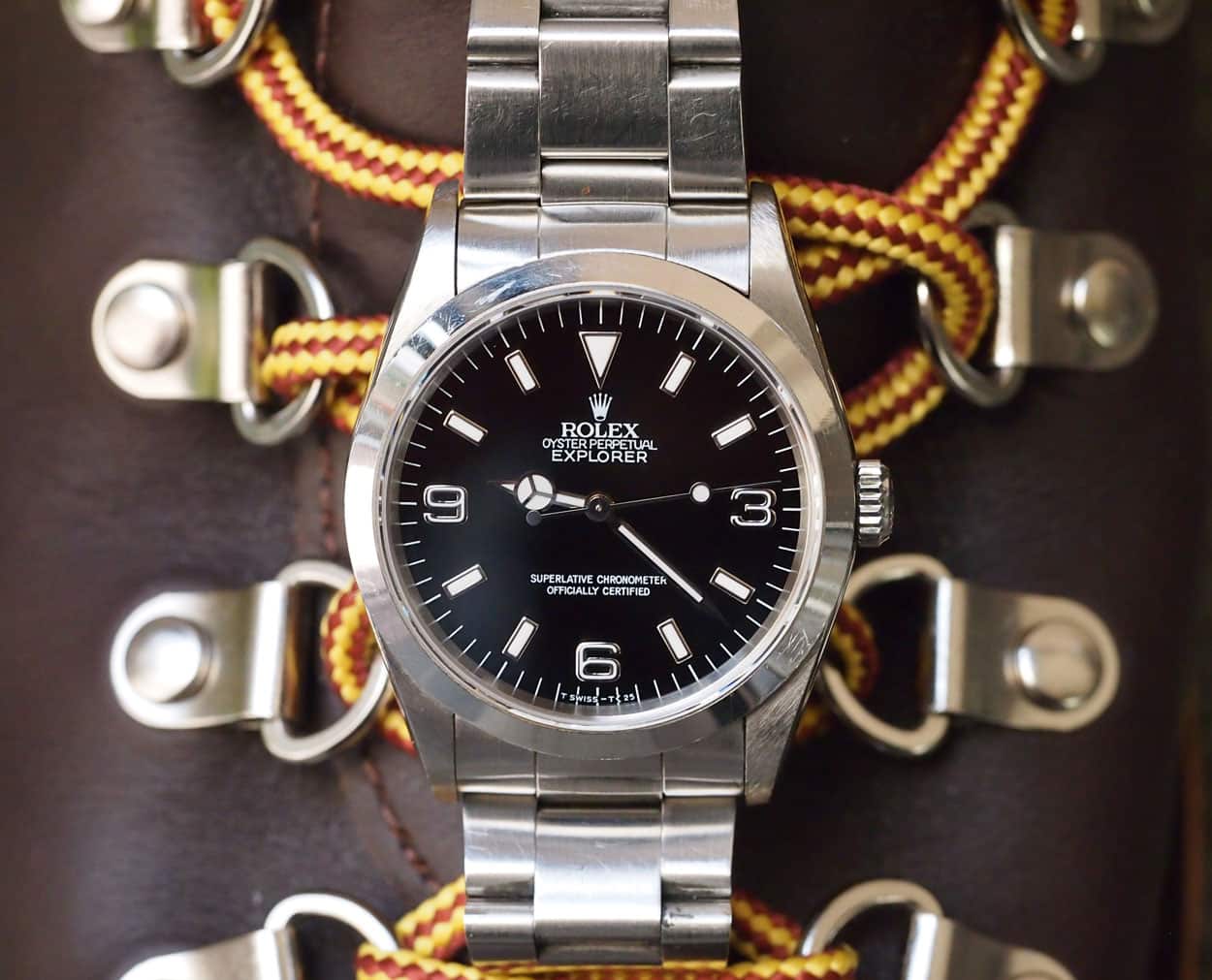 The choice is yours

Some would say that there’s no choice to be had between the Tudor Black Bay 36 and the Rolex Explorer. If you can afford the Rolex, you simply opt in that direction. However, not everyone can spend double the money or wants to do that. In which case, the Tudor is a screaming bargain. And like I mentioned, Tudor brings Rolex family history and a lot of the looks. So, where do your interests lie? Do you write the fat check for a Rolex or do you get most of the way there for about half the pain?