Time for a treasure hunt. And, as you would expect, X marks the spot. The treasure you’re seeking is the Ulysse Nardin Diver X Skeleton LE. There are only 175 pieces of this watch around waiting to be discovered. The reward is a provocative and polarizing watch. A watch that helps you to get in touch with your inner buccaneer because of its outrageous styling without compromise. Ulysse Nardin has been about adventure, discovery, and marine chronometers since 1846. And this latest creation revives that adventurous spirit in a futuristic fashion.

The Diver X Skeleton looks to be the result of a Ulysse Nardin Diver and a Blast from the Executive Skeleton, slamming into one another. That’s exactly what UN did in its manufacture in Le Locle. The result of the crash is a watch that has a traditional link to the world’s oceans. Although there’s no sea in sight in the Swiss Jura, still the brand is famous for building very accurate marine chronometers.

…when young Ulysse learned that the demand for marine chronometers was increasing, he made them his specialty.

That started with Ulysse Nardin himself. He was 23 when he founded his company, and when young Ulysse learned that the demand for marine chronometers was increasing, he made them his specialty. Pretty soon he was delivering chronometers to international shipping companies and won many accuracy competitions — Neuchâtel Observatory’s last official report noted that Ulysse Nardin had obtained 4,324 certificates of performance for mechanical marine chronometers, including ten gold medals. 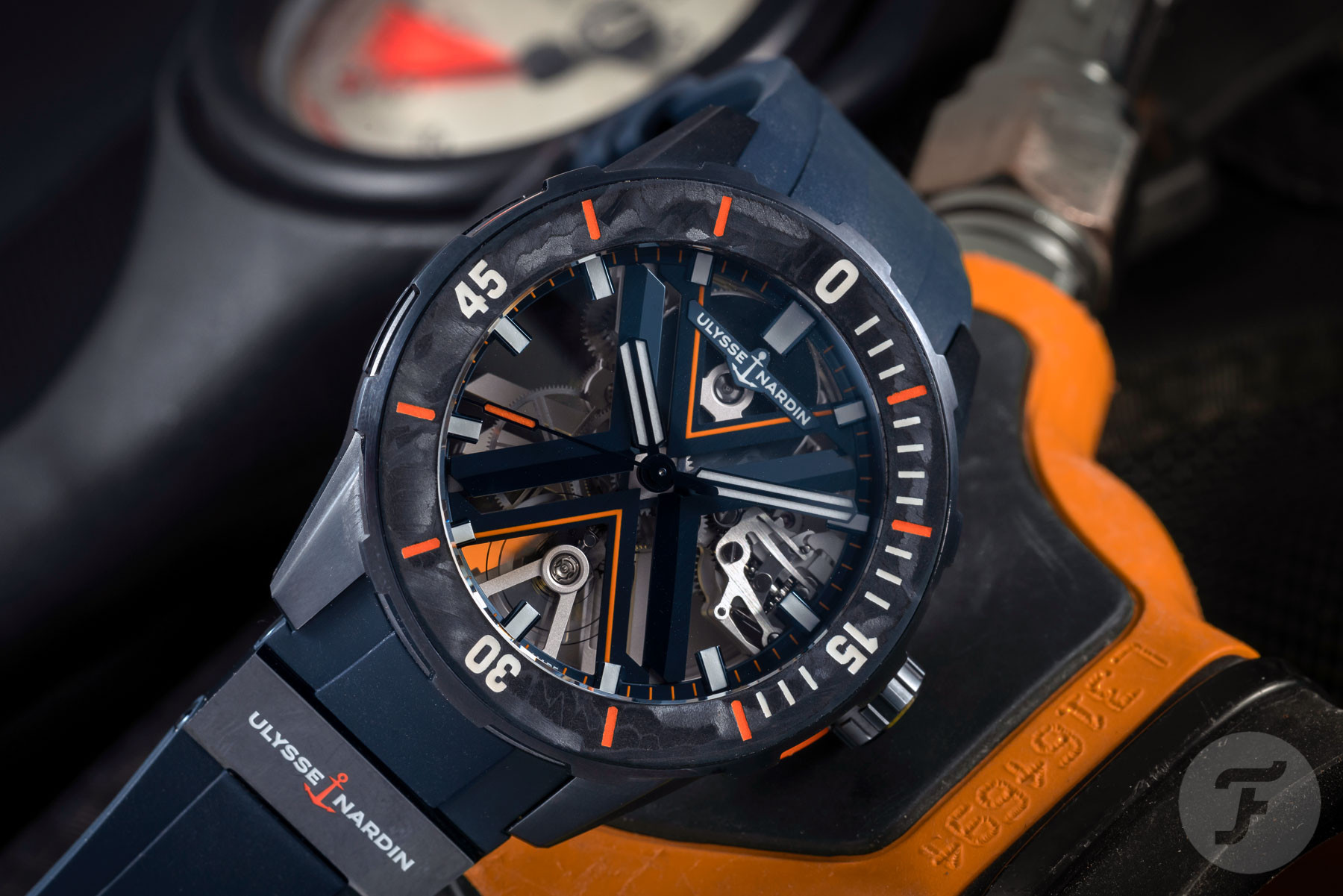 A Diver X Skeleton is a watch for futuristic pirates

The Diver X Skeleton may not look like the reliable deck instruments to navigate the open seas, it sure shares some of their historical values. The family genes are present, but you need to go look for them in this watch that looks like it belongs to a futuristic pirate captain. Well, the nautical fantasy is already one historical reference, so we’re off to a good start. 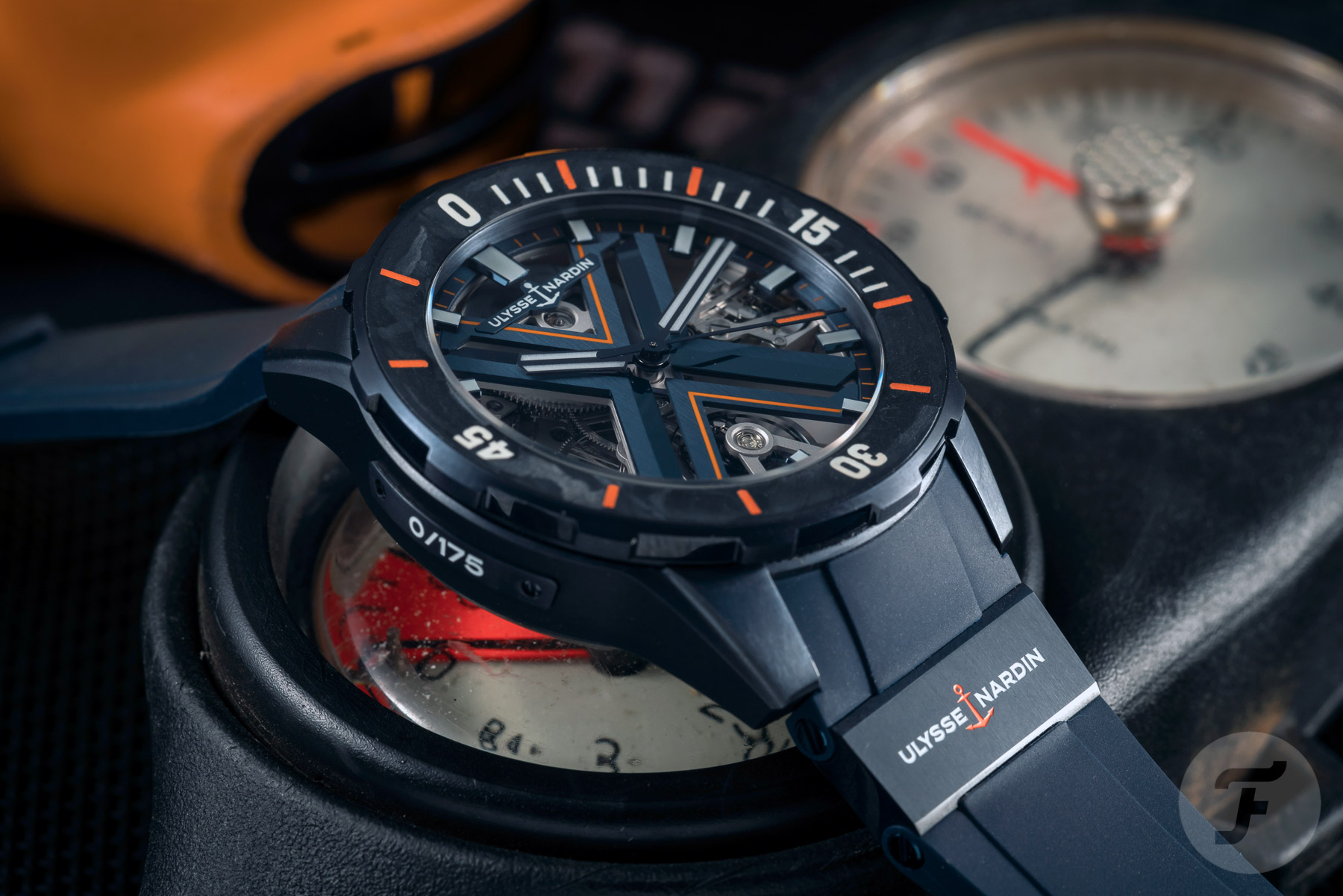 The other one is precision. Okay, this watch isn’t chronometer-certified, but the automatic, in-house Caliber UN-372 sure tells of ambition and progress. First, it’s the architecture of the 171-part, 3Hz movement that does away with the ordinary. And second, the anchor and balance spring are both made from silicon to optimize accuracy and obtain a modern 72-hour power reserve. 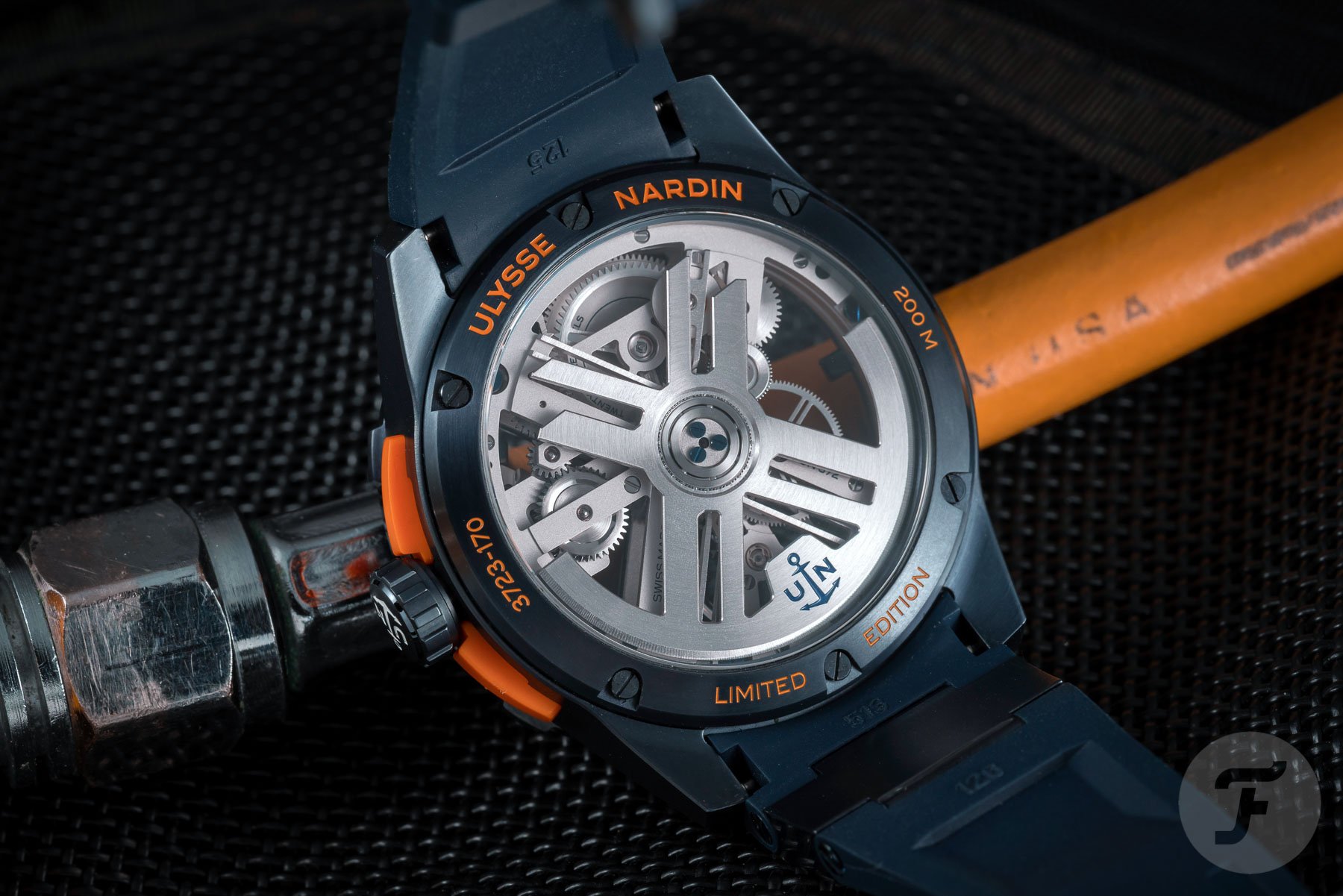 The numbered Diver X Skeleton LE boldly goes on where the more moderately designed Diver X comes to a halt. And when I say that, I mean the watchmaker continues his work and gets rid of the material he deems excessive. And by doing so he creates a transparent, three-dimensional, very architectural-looking watch. Have a look at the hour markers that have an invisible connection to the dial. It looks like they’re floating, but they’re not. And that’s a good thing because the Diver X Skeleton needs to live up to the word “diver” in its name. 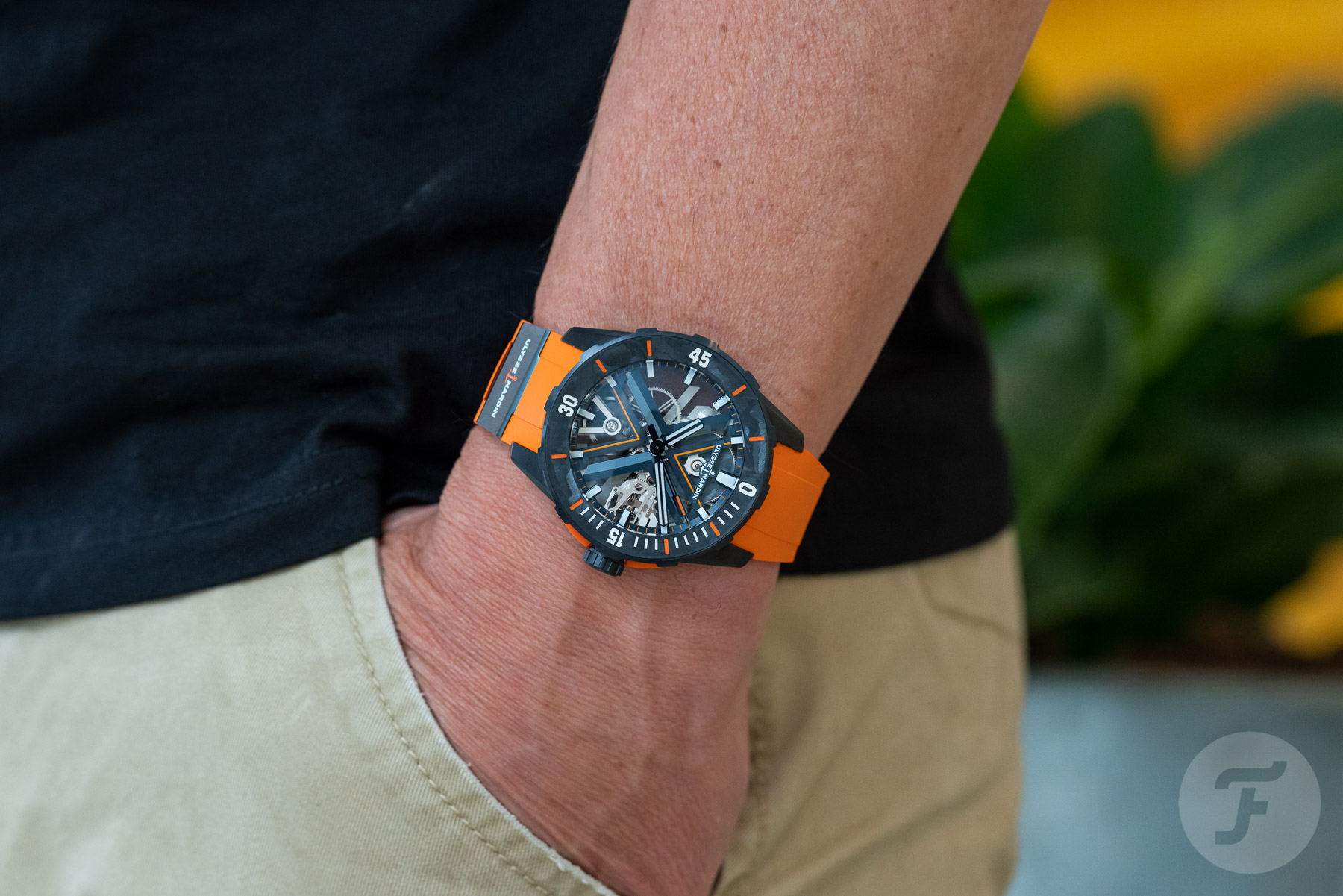 The “X” aspect of the watch is obviously the movement, with the prominent X-shape finished in blue PVD. The “Diver” part is the 44×16mm titanium case that is water-resistant to 200 meters. The side of the case is micro-beaded for a matte look, while the lugs are satin polished.

… because of the similar colorful treatment, both surfaces match the color of the big X on the dial.

Both finishes are matte, of course, but there’s a subtle difference between the two of them and that creates a delicate contrast. And because of the similar PVD treatment, both surfaces match the color of the big X on the dial. The sapphire glass is protected by a concave diving bezel — yes it’s unidirectional, and yes the bezel is made of carbon. Well, Carbonium to be precise. A lightweight and strong carbon composite that is mostly used for the fuselage and wings of modern aircraft. A material Ulysse Nardin has also used in the Freak X and a chunk of which can also be seen at 12 o’clock, under the logo, where it is used as a barrel cover. 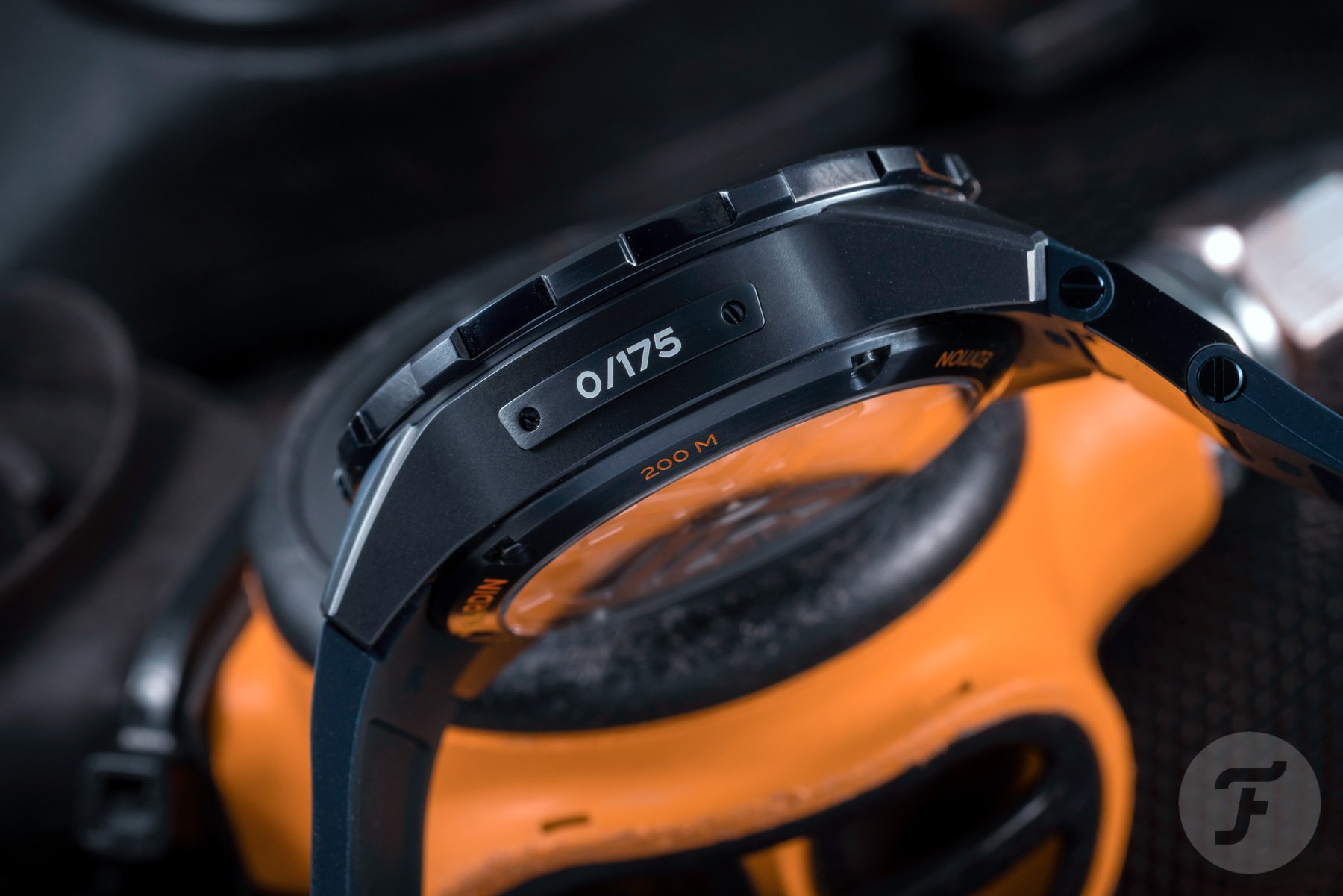 Unfortunately, I couldn’t find a decent pirate ship to take me to the Caribbean to try the Diver X Skeleton in the habitat I picture it in. I had to make do with a transformed tobacco factory and a walk on the beach near my home. One thing is for sure, the watch is a noticeable creature. Especially with the Supercharged Orange rubber strap that I wore it on. The dark Ocean Blue version you see in the other pictures is a lot more subdued. 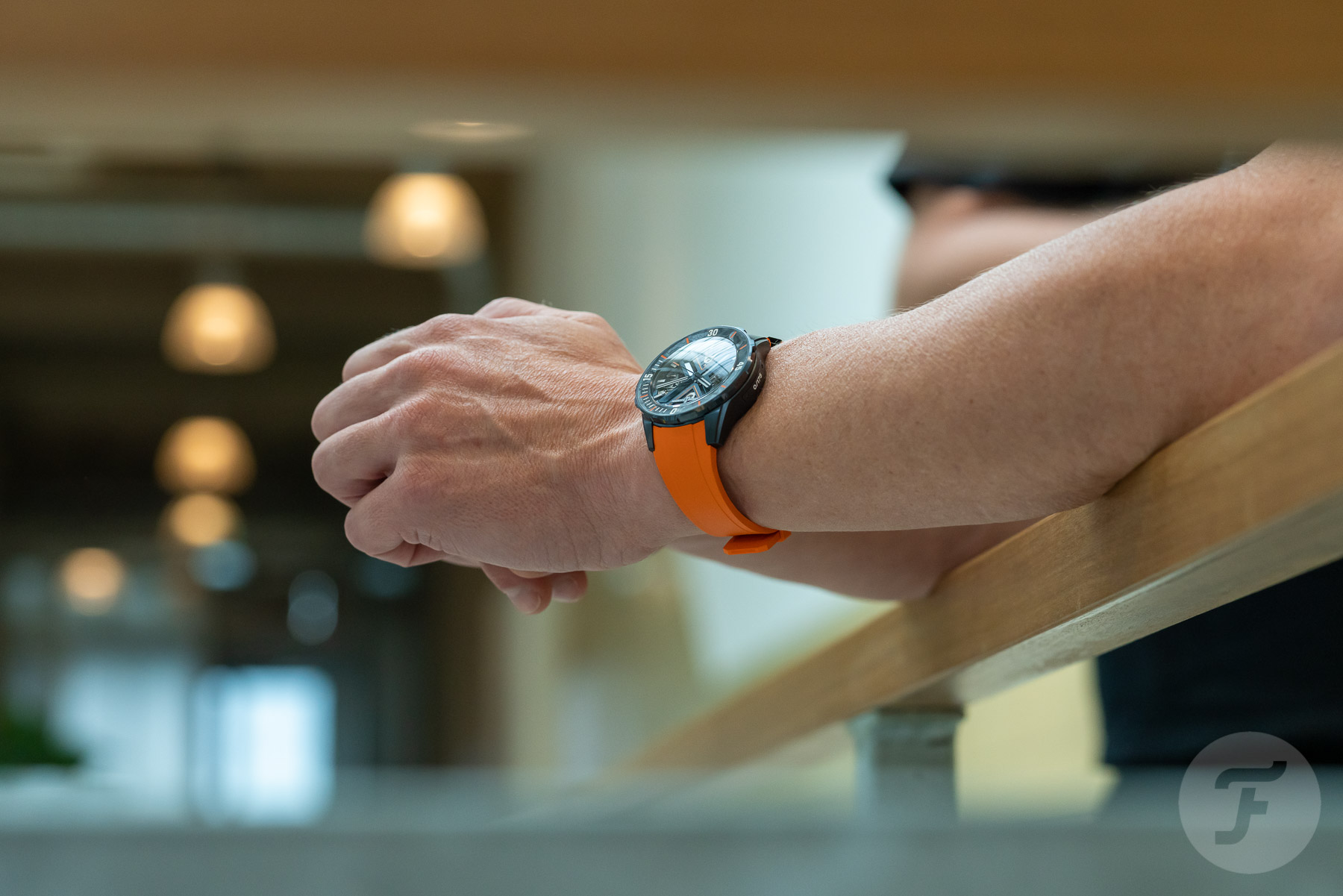 Bringing out the athlete in the pirate

I went for the most exuberant version, where the strap makes the other orange details take center stage. This is the combination that brings out the athlete in the pirate. And because of the typical construction of the strap with an extra element adorned with the Ulysse Nardin anchor in bright orange, the Diver X Skeleton looks different and wears rather well.

… because of the titanium and Carbonium the large watch is not too heavy.

The strap is comfortable, the clasp too, and because of the titanium and Carbonium, the large watch is not too heavy. And that results in a comfortable experience. What’s also nice is that the looks of the watch keep surprising you. No matter how often you look at your wrist, every time it does more than just tell time alone. It’s a visual spectacle I didn’t get tired of. 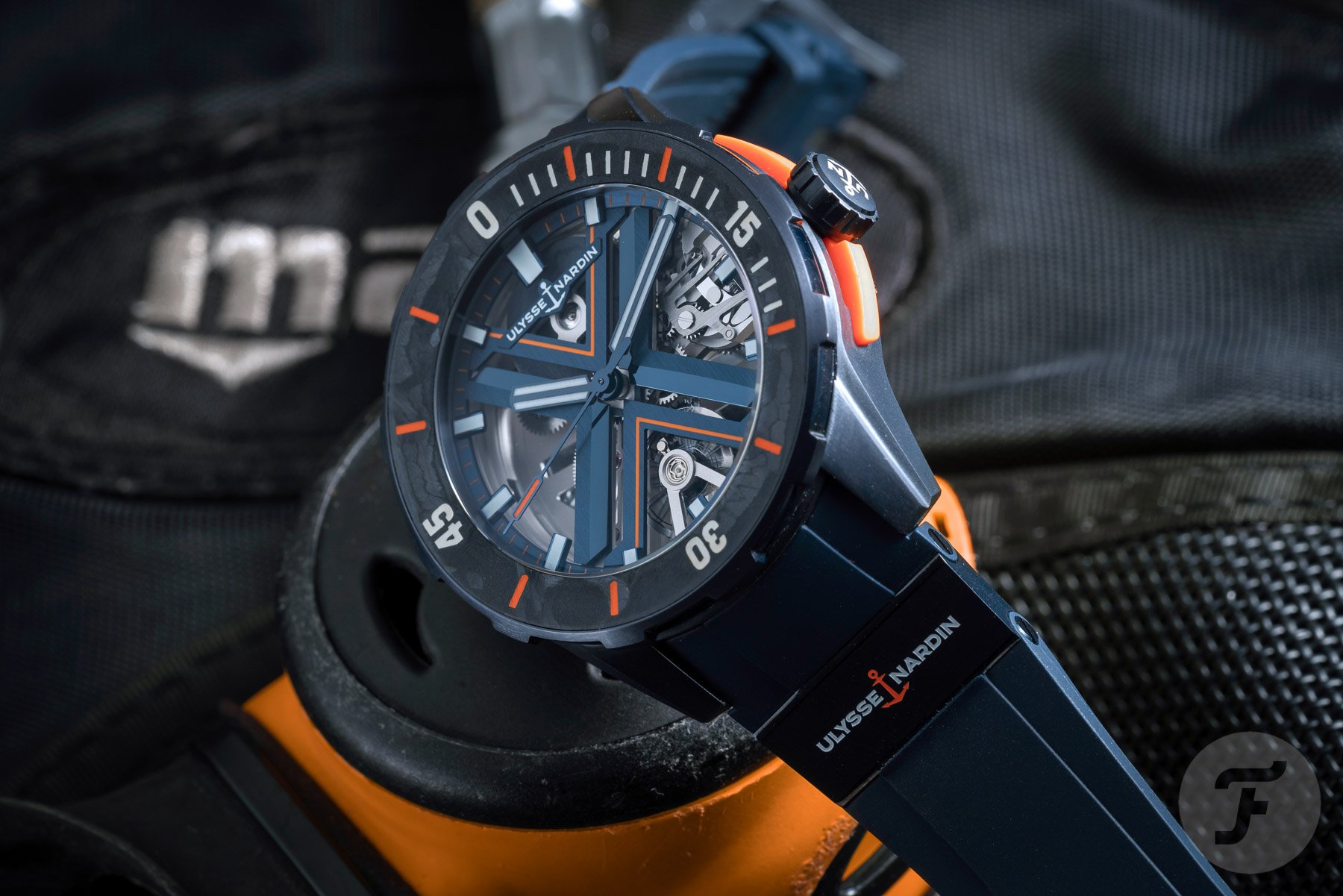 Also comforting is the idea that Ulysse Nardin offers an extended five-year warranty on all newly-purchased watches. But first, you have to shell out €19,300 — no idea what that is in Doubloons, but your treasure chest will definitely be feeling lighter. What you get for the price is a futuristic watch that links to the old marine chronometers made in Le Locle. Ulysse Nardin is not afraid to plot new courses, and that is to be applauded. 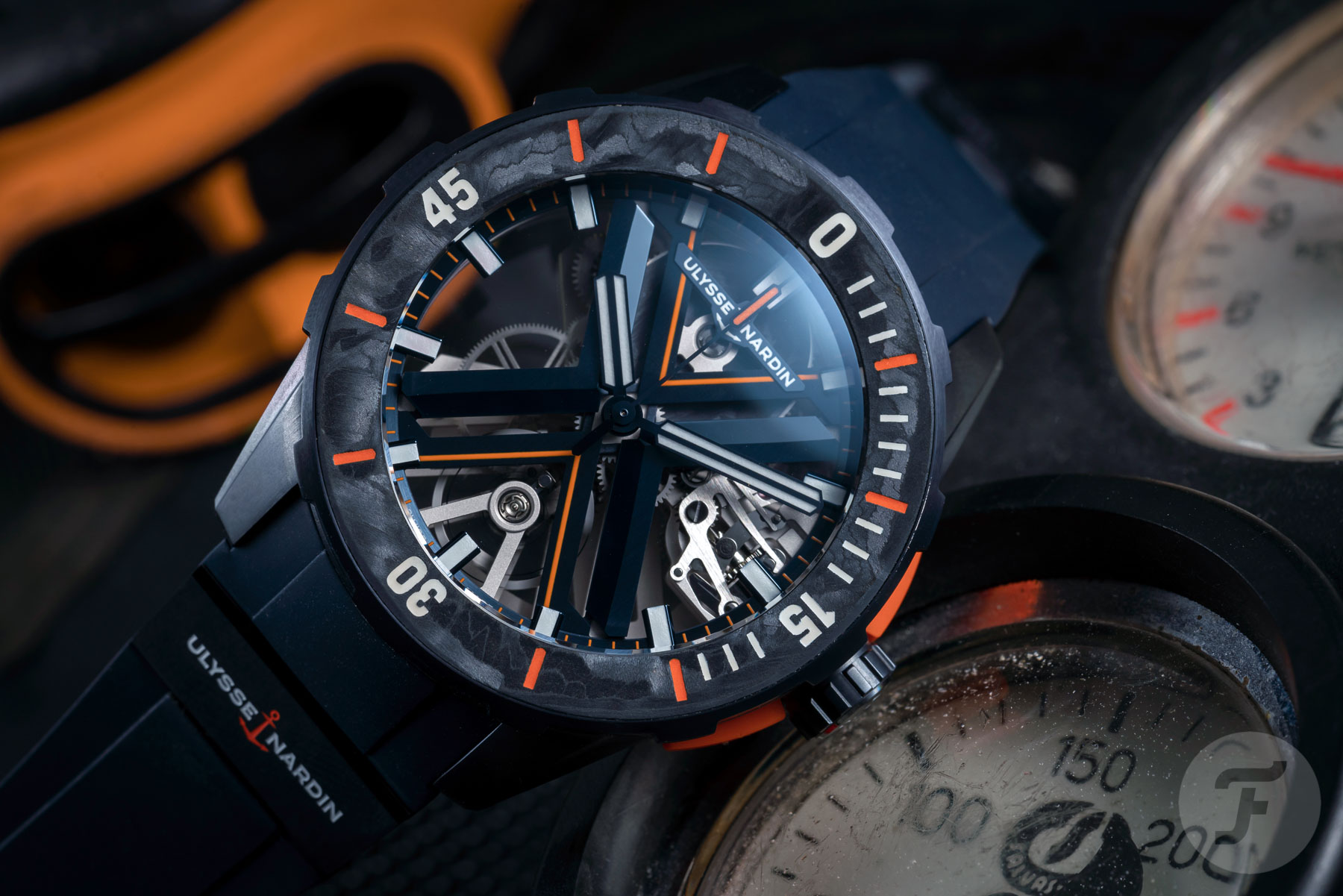 This watch isn’t for everyone, but it’s better to please 175 pirates at heart than to try and please a boatload of gray mice. And that’s what Ulysse Nardin has been doing — remember the first Freak? — and continues to do. As you might have read earlier here on Fratello, I like adventurous watch brands that look for new horizons. And that’s why I wish Ulysse Nardin, and every buccaneer with a Diver X Skeleton, fair winds, still waters, and a safe voyage!

You can find more information about the Diver X Skeleton right here.