We are used to seeing minimalistic timepieces from Unimatic. Watches that challenge the norm of watch design by removing elements or redesigning them. It’s all done to make sure that the results are as clean as possible. Apart from some spectacular collaborations, we generally see a toned-down aesthetic from Unimatic. That approach has proven very successful. With the release of the brand new Modello Tre ref. U3-AS, the Italian brand lets go of its minimalistic approach in favor of some pretty outgoing results. But don’t think for a minute that this piece is not as much about the design as all of the brand’s prior releases. On the contrary, it’s all about design.

Here at Fratello, we are obviously in Speedmaster territory. While a fascination with space travel is not mandatory, it does help one keep up with some of the discussion topics within the Fratello team. And whenever a brand releases a space-related timepiece, a large part of the team will be all over it. Especially when it pays tribute to a remarkable moment in space travel…

The new Unimatic Modello Tre U3-AS celebrates the unique Apollo-Soyuz mission carried out in July 1975 by the United States and the Soviet Union. The work of Galina Andreevna Balashova inspires the design of the watch. She was the designer of the iconic Apollo-Soyuz logo. And she was also a leading figure in the development of design for zero-gravity. 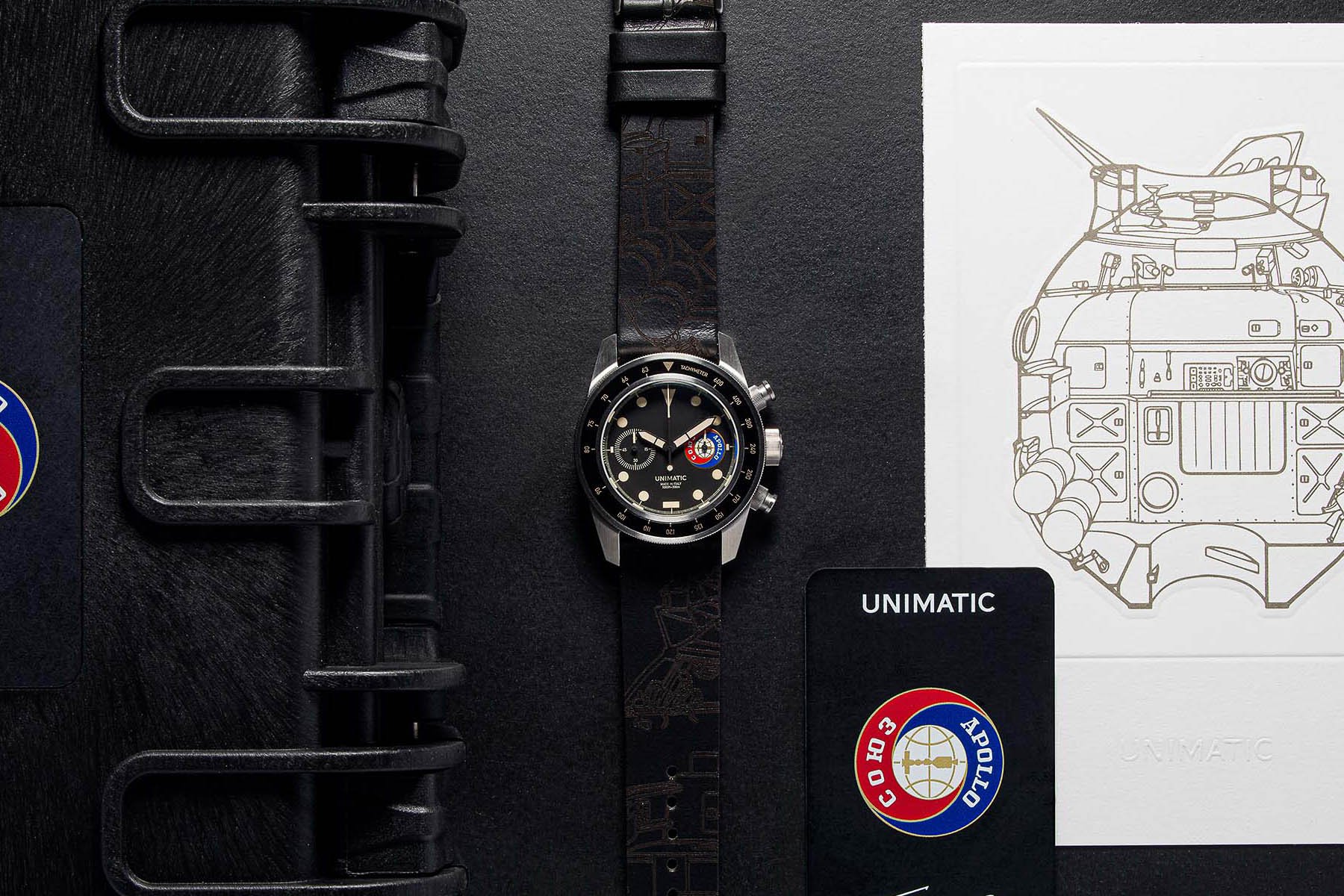 With the release of the Unimatic Modello Tre U3-AS, we are reminded of the end of the almost two-decade-long Space Race. The Apollo-Soyuz mission was a unique event. It brought together two nations trying to conquer space ever since the Soviet Sputnik 1 was launched in 1957. Millions of people witnessed a United States Apollo module docking with a Soviet Union Soyuz capsule live on TV. The goal of the mission was to perform a series of both joint and separate scientific experiments. Experiments that could help both nations in future space missions.

The reality was that the Apollo-Soyuz mission was the last Apollo mission ever. And it wasn’t until six years later that NASA embarked on a new space mission with the Space Shuttle’s first launch in 1981. At the same time, the Soviet Union continued to carry out its Soyuz missions successfully in the years after. The event looked like a perfect opportunity to bring the nations closer together. While the five crew members became lifelong friends, their governments didn’t. The reporting in both nations was very much biased towards claiming their own superiority. The two nations did not join forces again until almost two decades later, with the Shuttle-Mir program’s launch in 1993. 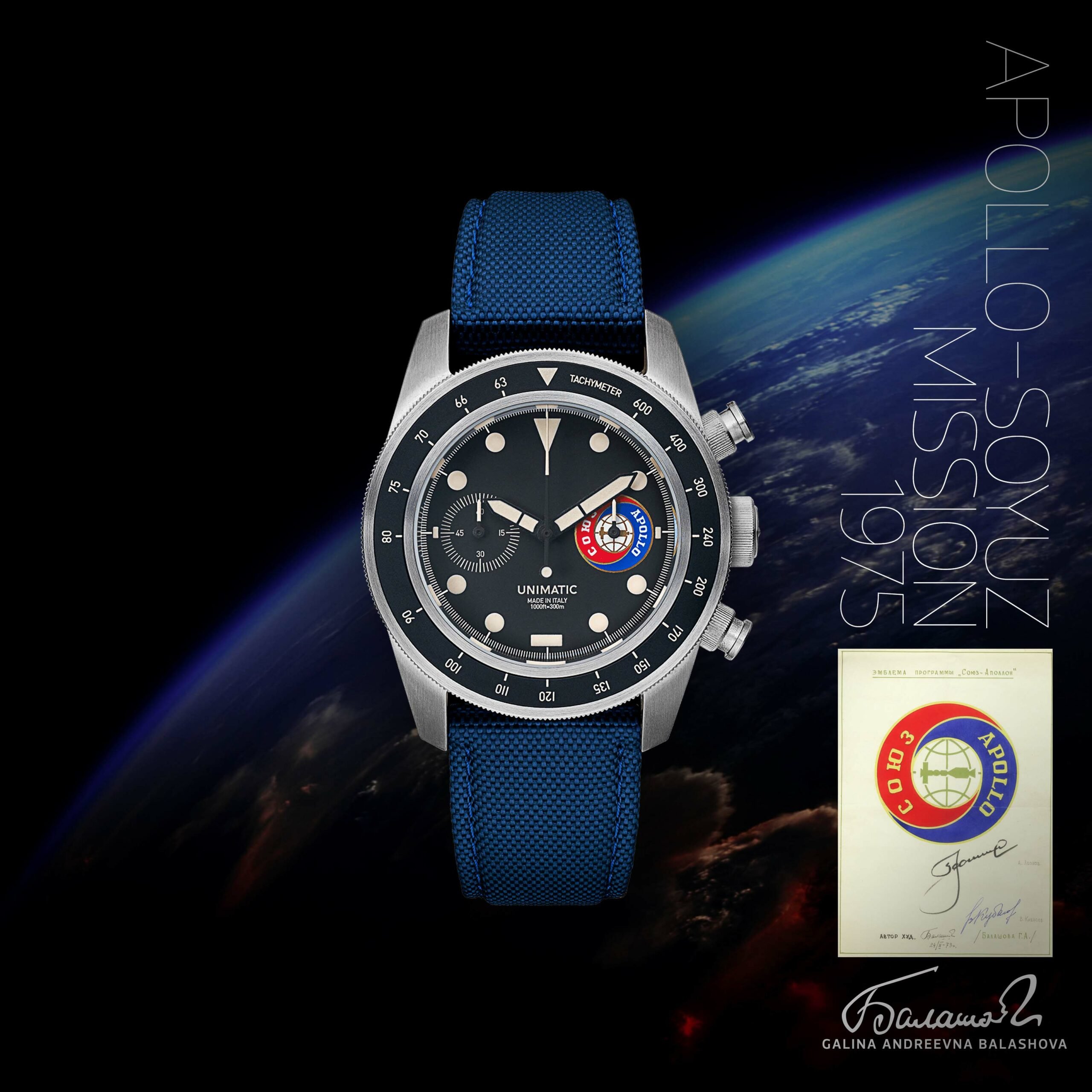 With the release of the Modello Tre U3-AS, Unimatic does not just celebrate that unique mission from 1975. When discussing Unimatice timepieces, there is always a link to design. And this time, that is no different. The design of the U3-AS is an homage to the Russian architect and designer of the Soviet Space Programme Galina Andreevna Balashova. She designed the Apollo-Soyuz mission logo. The logo is cleverly designed and visually much more appealing than most of the Soyuz logos from those days. Next to that, Balashova played a pivotal part in the development of the design for zero-gravity environments. Something that was not recognized internationally until recently.

Balashova’s work for the Soyuz program included the design of interior spaces, furniture, control panels, logos, and murals for interior walls. What is so special about them is the use of contrasting colors so astronauts would not become disoriented in zero-gravity environments. Many of her designs stand out because of their bright colors inspired by functional use in space. Her stand-out work for the Soyuz program is the inspiration for this new Unimatic timepiece. If you have the time, look up zero-gravity design and specifically her work for it. It’s a fascinating read. 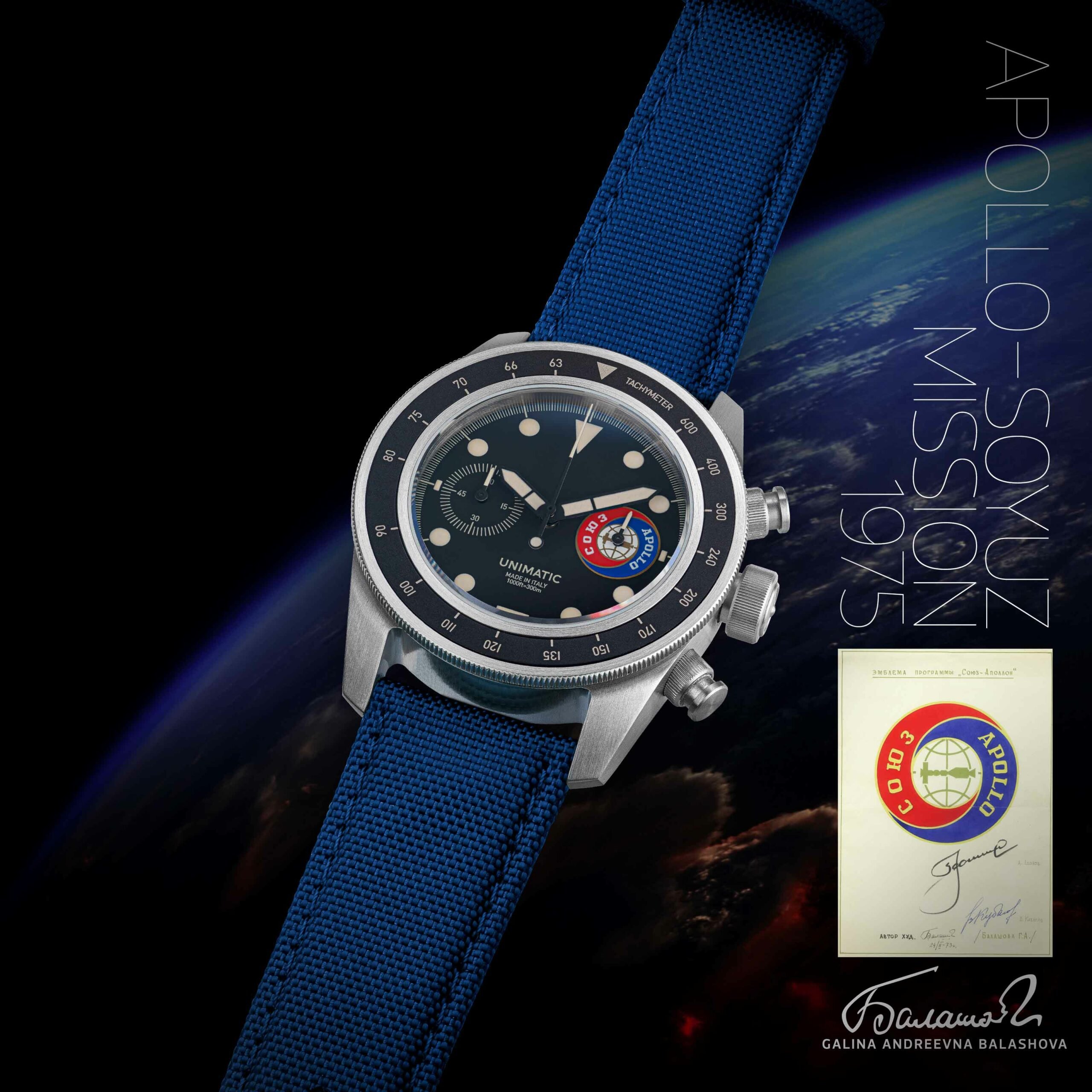 The design of the Modello Tre U3-AS

Within the Unimatic line-up, the Modello Tre is its series of quartz-powered chronograph watches. Up until now, we have seen only a select number of Modello Tre releases. They are based on the same case design as the successful Modello Uno. And the designs are also focused on getting rid of any excess baggage to create stylish and minimalist chronographs. So the design of the Modello Tre U3-AS is immediately recognizable as a Unimatic design. But the new U3-AS is definitely more lively than the previous Modello Tre releases.

The U3-AS uses the familiar 40mm stainless steel case. The watch measures 51mm lug-to-lug and is 13.7mm thick. Under the  2.5mm thick double domed sapphire, we find a two-eyed black matte dial with the blue and red Apollo-Soyuz logo on the 24h sub-dial. The bright contrasting colors immediately catch your eye when you see the watch. The design of the markers is completely in line with previous Unimatic designs. They are filled with creamy Super-LumiNova® Old Radium for a nice vintage touch.

Besides the Apollo-Soyuz logo, another element that stands out is the rotating tachymeter bezel insert. It’s a first for Unimatic as the Modello Tre has always been a divers’ chronograph up until now. Besides adding function, the tachymeter is also a visual break from the regular Unimatic releases. And one that suits the Modello Tre well, I must add. 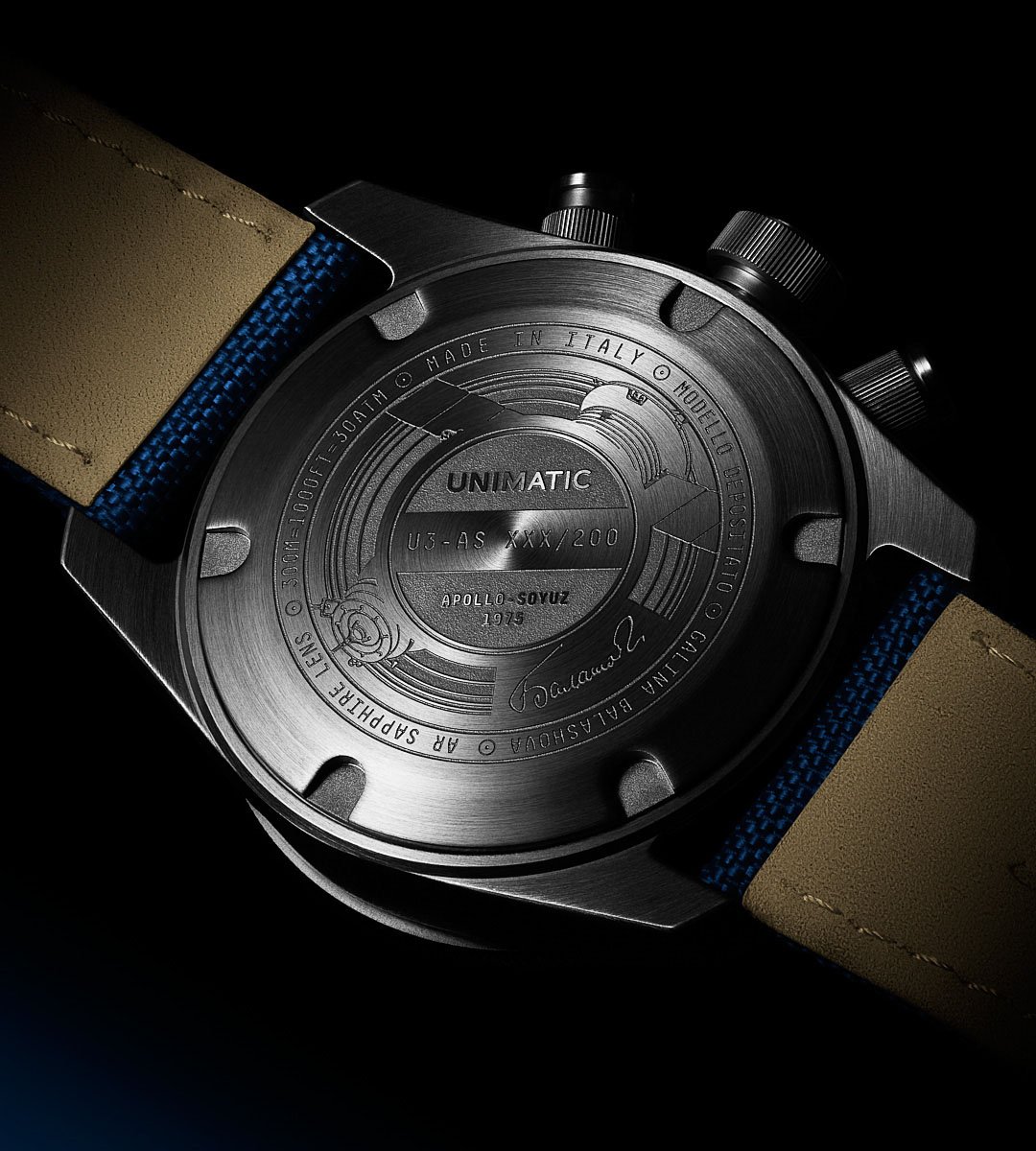 It’s all in the details

Other stand-out elements that characterize the U3-AS are the oversized crown and screw-down pushers.  They add a bold presence to the piece that I like. The watch comes with a selection of two different 22mm straps. The first is a galaxy blue Cordura strap equipped with a steel buckle. The second is a black laser-etched buccaneer leather strap that also comes with a steel buckle. The laser etching depicts Balashova’s design of the section view of the Soyuz 19 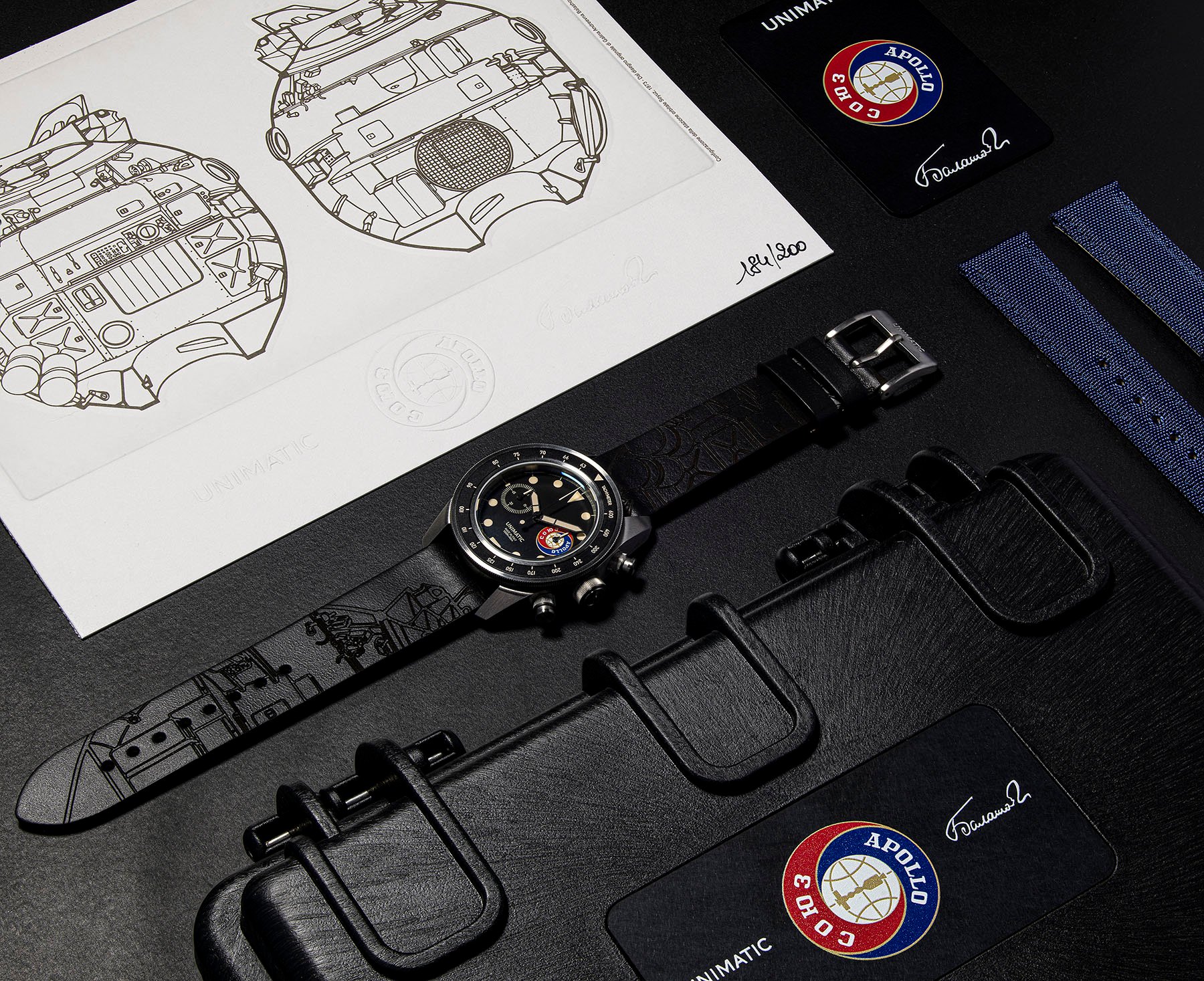 The watch comes in a special case that features logos from Unimatic and the Apollo-Soyuz mission, and Balashova signature. On top of that, the watch comes with a unique and individually numbered print of Balashova’s design. The watch is a limited edition of 200 pieces and is available for €650 excluding VAT. Since the set is limited to 200 pieces, I expect these to go quickly. So if you would like to buy one, you definitely have to be fast. 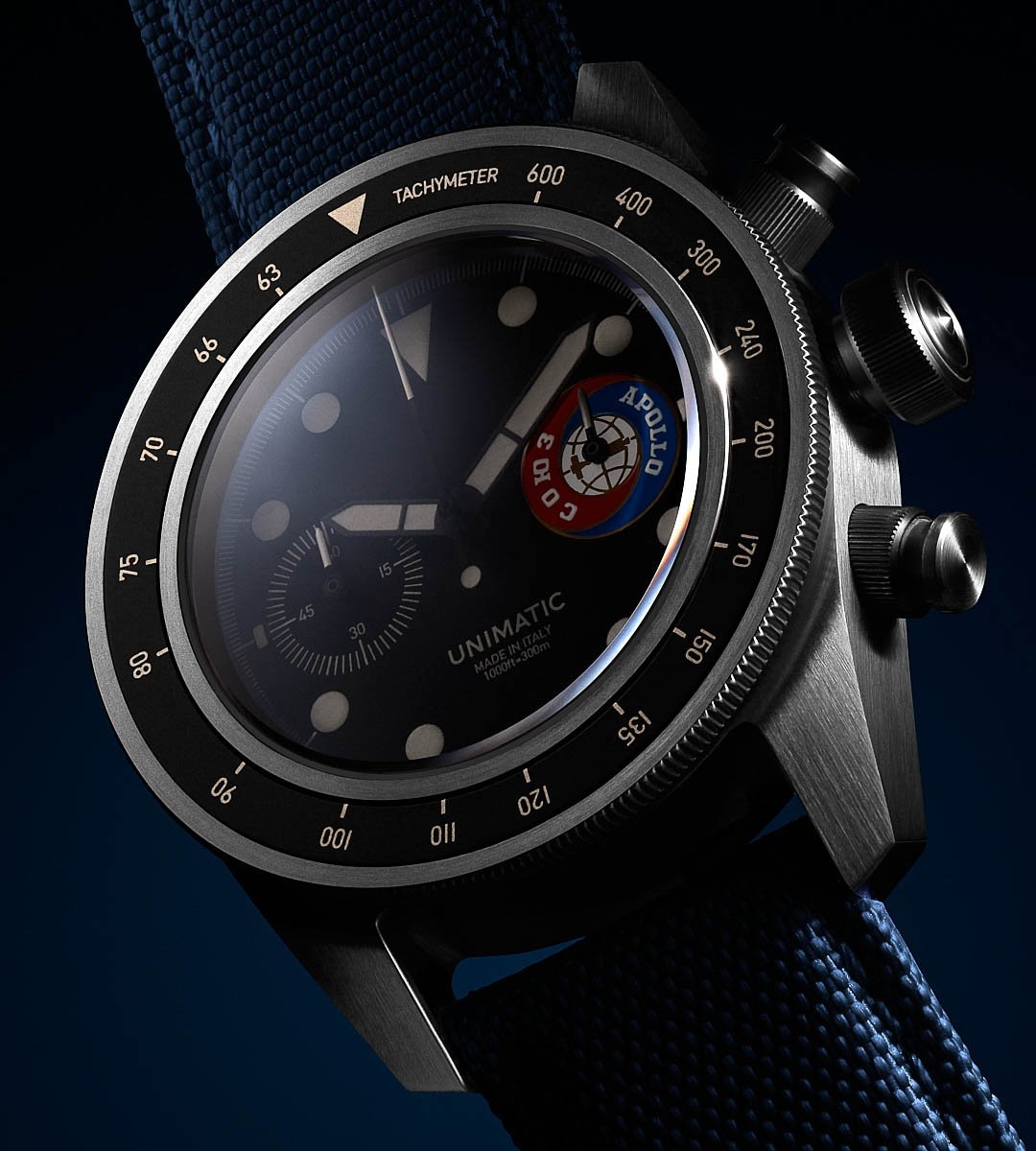 The stand-out feature of the new Unimatic Modello Tre U3-AS is, without a doubt, its colorful design. It’s a break from the usual modern and minimalistic approach from the brand. Personally, I like that the brand has chosen to commemorate the Apollo-Soyuz mission. It made me spend a few hours reading all about the unique mission.

And love that the brand honors Balashova’s groundbreaking work with this watch. Her Apollo-Soyuz mission logo is a real eye-catcher that suits the design of the Modell Tre well. On top of that, I love the overall 70s look of the watch. The watch really does looks like a chronograph from the 1970s. It shows that by changing up a few elements, you can greatly change the overall aesthetic. 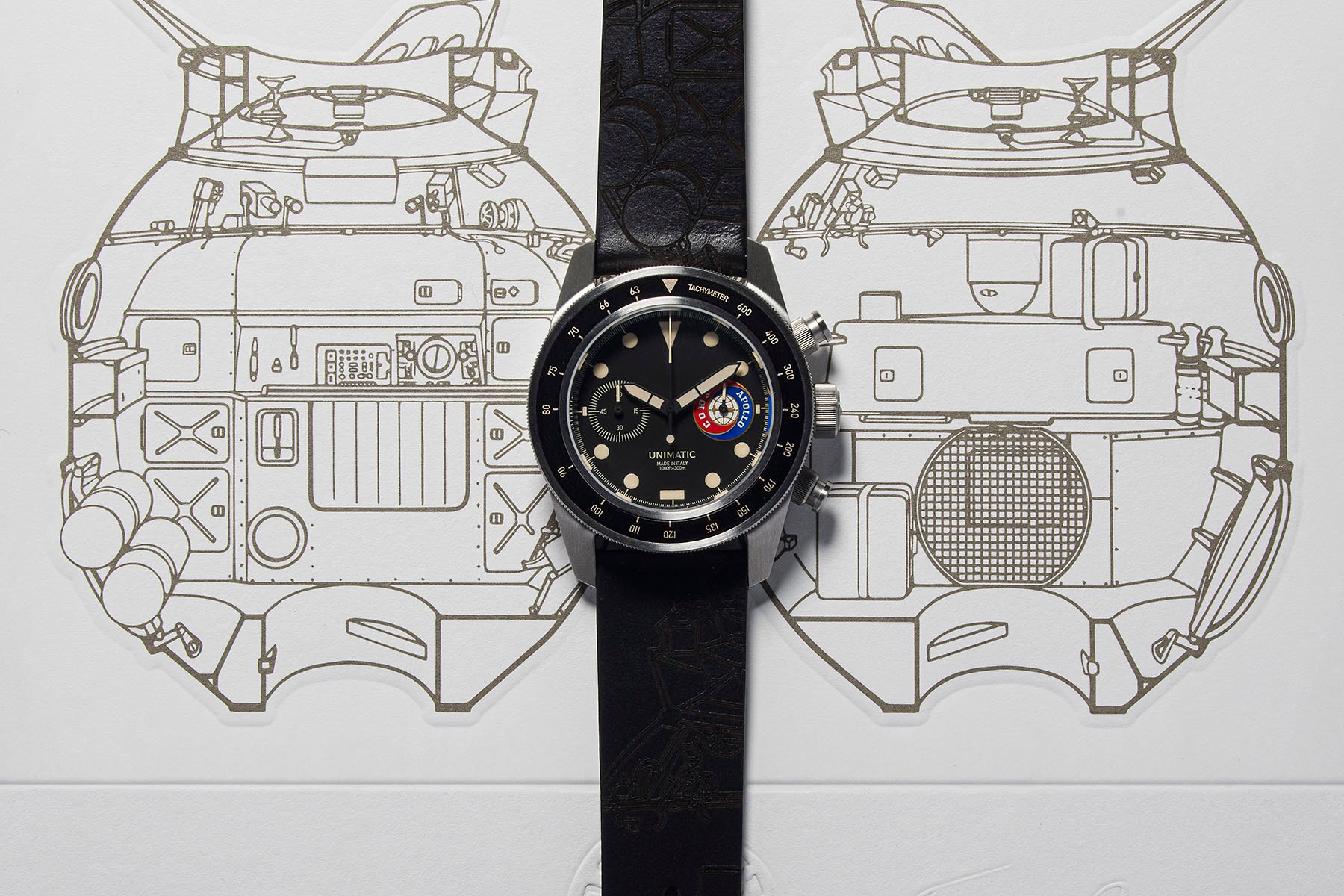 A dealbreaker for some will be that meca-quartz movement that powers the watch. Some people prefer mechanical watches over quartz watches. In an interview I did with Unimatic founder Giovanni Moro last year, he explained the choice for the current Seiko movements. Next to being reliable, the brand also uses them to limit their list prices, which is understandable.

But it will be interesting to find out if Unimatic would consider using mechanical chronograph movements for the Modello Tre. It would probably increase the already massive success of the brand even more. For now, I think Unimatic will have no problem selling all of the 200 pieces produced of the Unimatic Modello Tre U3-AS. On the contrary, I think the brand has hit another jackpot with its second space-inspired watch. After the much sought-after NASA limited edition, this a fun and great-looking watch. And a great shift in style that shows the potential of Unimatic’s design. If you would like to find out more, visit the official Unimatic website.

Hot Topics
Introducing: The Omega Speedmaster Super Racing With Spirate System
165 comments
Design Vs. Specs — Which Is More Important To You When Buying A Watch?
86 comments
My Predictions For New Omega Speedmasters In 2023
54 comments
The Time To Buy Is Now: How The Current Economic Climate Influences Watch Buying And How You Should React
51 comments
A Regret-Free Guide To Buying Your First Luxury Watch — Part Three: Higher-End Options From Omega, Rolex, Grand Seiko, And More
48 comments
Popular
The Ultimate Sports Rolex – The Explorer II Reference 1655
Robert-Jan Broer
17
You Asked Us: Tissot Powermatic 80 Seastar 1000 or Longines HydroConquest
Robert-Jan Broer
20
New Hamilton Intra-Matic Auto Chrono – An Introduction (with live pictures)
Balazs Ferenczi
13