I always enjoyed history lessons at school, but most of the history taught in UK schools revolves around Britain. So, that’s the Romans and the Celts, the Saxons and the Norman Invasion, as well as the likes of Henry VIII. Of course, World War One and World War Two also received extensive coverage. The likes of ancient civilizations such as the Greeks, the Aztecs, and the Mayans, however, were left entirely untouched. Thankfully I had my trusty Horrible Histories books to cover that part. Now that my beloved URWERK has introduced the new and fantastic UR-100V Time and Culture I, I’m feeling ready to dive into “The Angry Aztecs” all over again!

That’s right, the UR-100V Time and Culture I is inspired by Aztec culture. It is also supposedly partly based on an idea from our friends over at SJX Watches. SJX suggested adding an extra dimension to the UR-100 by closing the top just like the first edition of the UR-103. It is not, however, a collaboration with SJX. 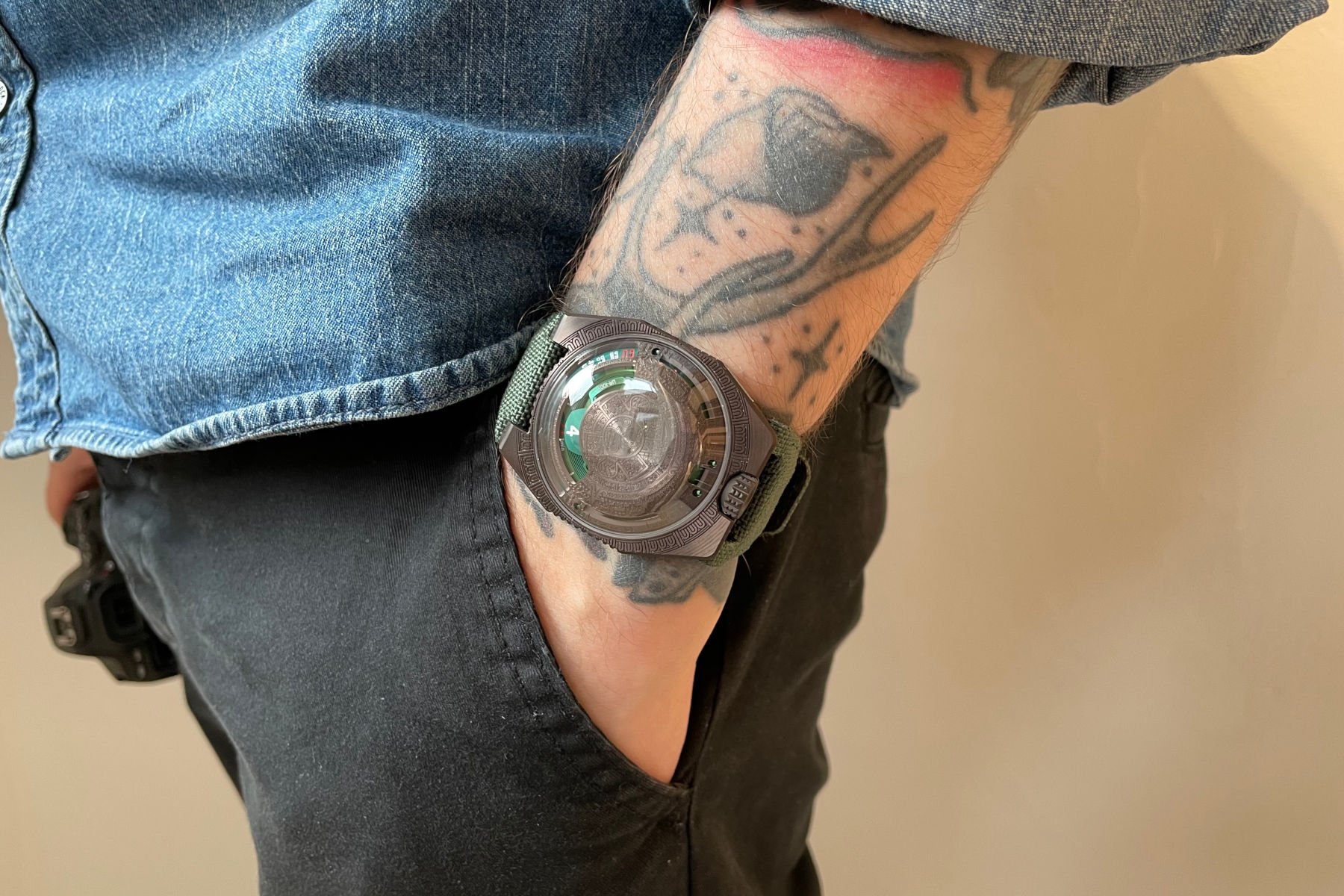 Upon a recent visit to the new URWERK atelier in Geneva (in what is supposedly the oldest building in the city!), the brand told me more about the Time and Culture collection. But let’s start at the very beginning. As you may or may not know, the UR-100V received its inspiration from an old clock. In fact, the original concept of the satellite hours complication was inspired by an old clock too. Interestingly, these clocks now reside in the URWERK atelier, and URWERK co-founder Felix Baumgartner’s father, Geri, restored them both. So you can see there’s a solid sentimental connection here. The clock that inspired the UR-100V, however, doesn’t tell the time… I know, how weird! After some in-depth research, Geri Baumgartner worked it out. He established that the clock measures the distance traveled through space by someone standing on the equator.

I’m not going to try and explain the concept in too much depth. Honestly, it’s more complicated than my mind can handle. But, our friends at Quill & Pad have a rather excellent article that helps explain it in more detail, so I’d suggest checking that out right here. 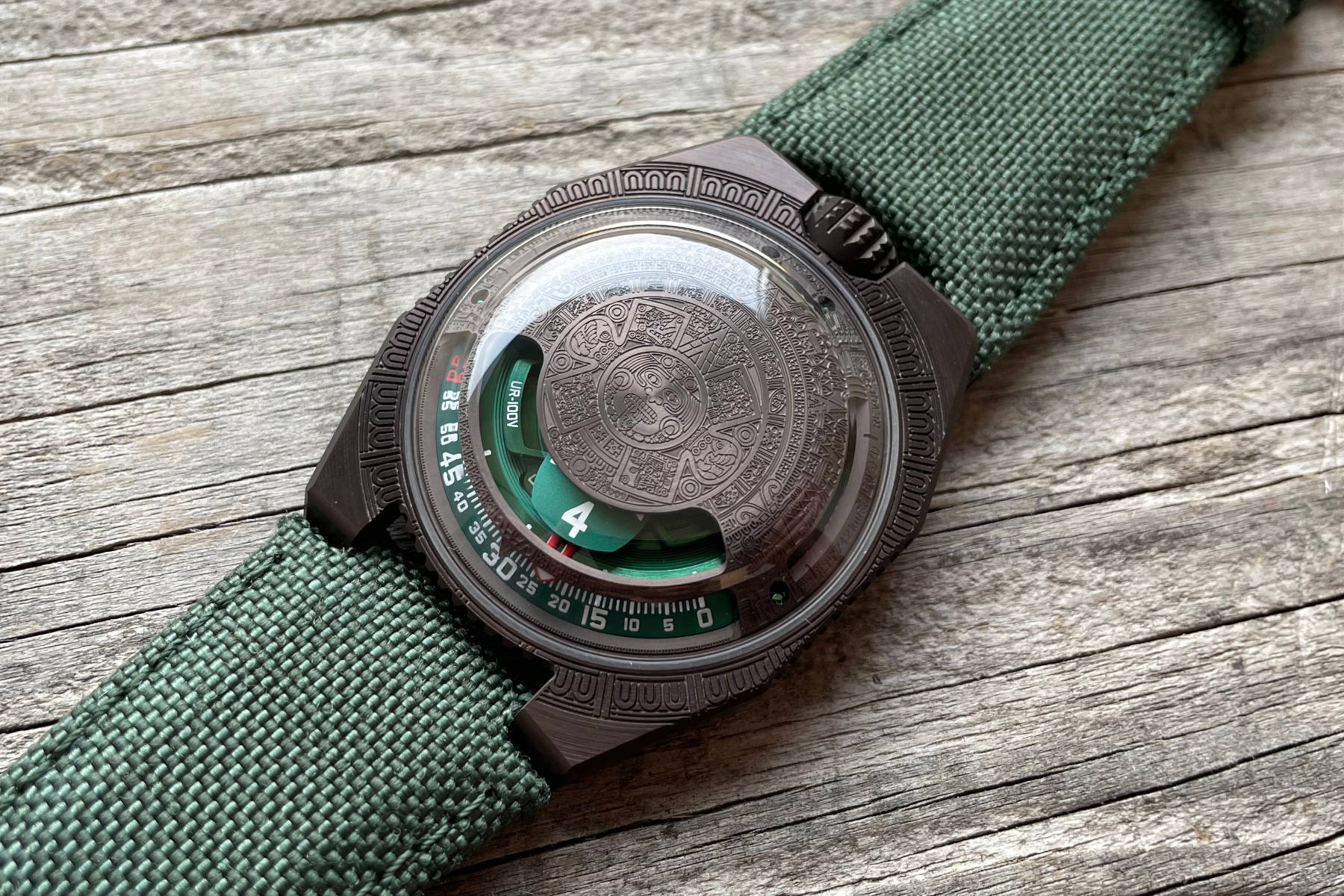 A journey through time

Knowing where the concept for the UR-100V came from, the 2019 UR-100’s “SpaceTime” moniker makes more sense. URWERK has since decided to explore the concept of traveling through time in more detail with the Time and Culture collection. The Aztec-inspired piece you see before you is just the first piece in the new collection. At this point, I don’t know much more other than that we should expect to visit and celebrate more pivotal human civilizations throughout history. And we’ll see them all through the lens of the versatile UR-100V.

URWERK co-founder Martin Frei said, “This line is about history, cultures, our place beneath the stars, the research, and observations that have been conducted around the world using the same sky above our heads as a source of knowledge. I am always fascinated to see that these unique observations, made thousands of kilometers away, have given birth to a universal language, that of time.” 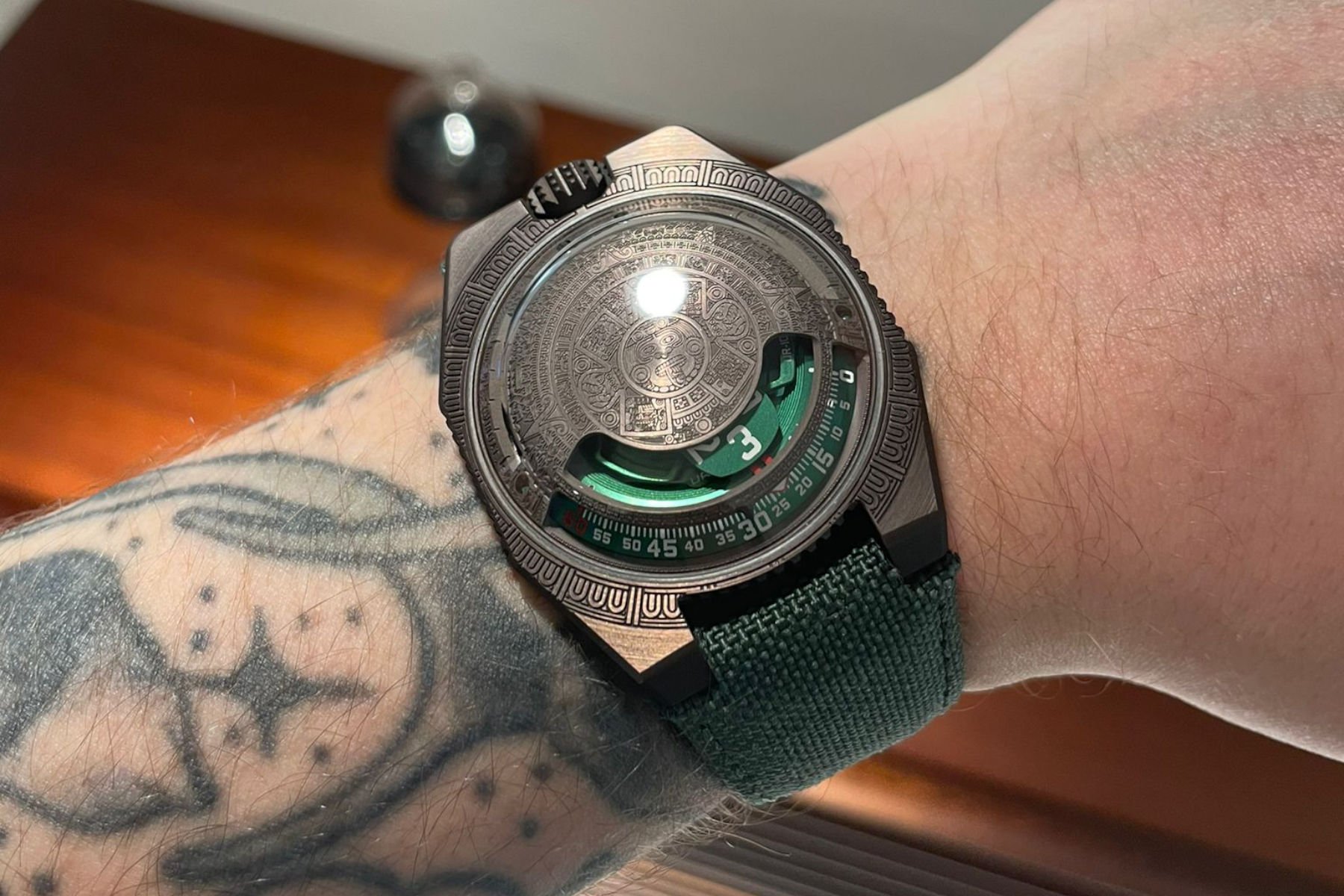 For the first stop in the Time and Culture line, URWERK takes us to the lands of Central America around the year 1479. The UR-100V usually has a fully “open” dial, but the new watch features a large carapace (which URWERK calls the “Blende”) covering much of the movement’s inner workings. This carapace features the famous “Sun Stone” motif. This stone is one of the most well-known surviving works of Aztec art, and it’s now preserved in the National Anthropology Museum in Mexico City. This monolith is a sculpted disc measuring nearly 3.6 meters in diameter. Carved into its surface are a multitude of calendrical and theological symbols which were important in Aztec culture. 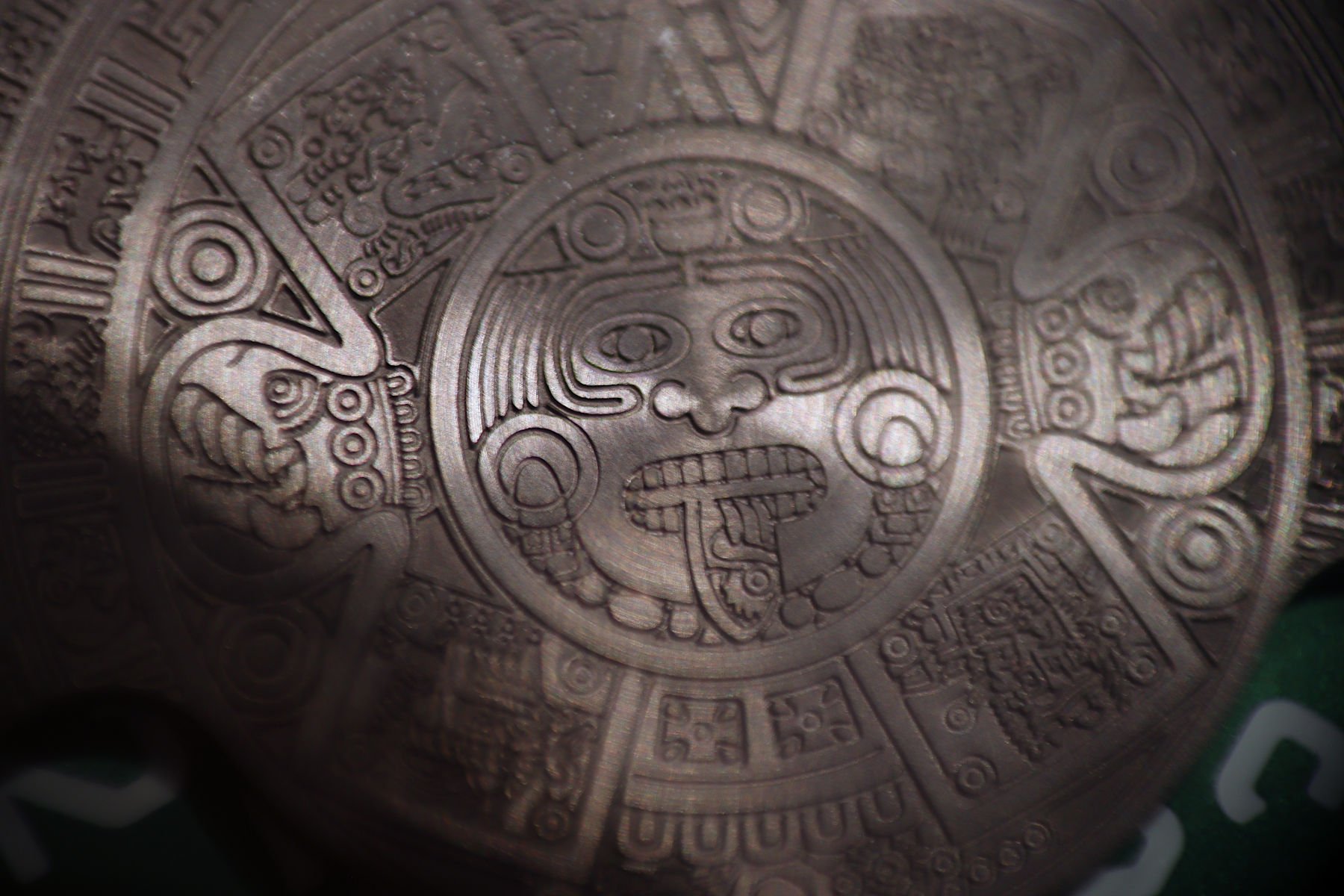 URWERK chose to repeat the Sun Stone’s intricate pattern on the Time and Culture I’s brass carapace. The pattern is quite difficult to photograph well, but I tried my best. As I did not have a macro lens with me, I improvised with an on-hand loupe. Each of these carapaces takes eight hours to complete. The CNC-milling cutter used for the engraving has a 0.05mm-thin point — yikes! Look at the photograph below for an idea of just how minuscule that is and how it can achieve such intricate detail! 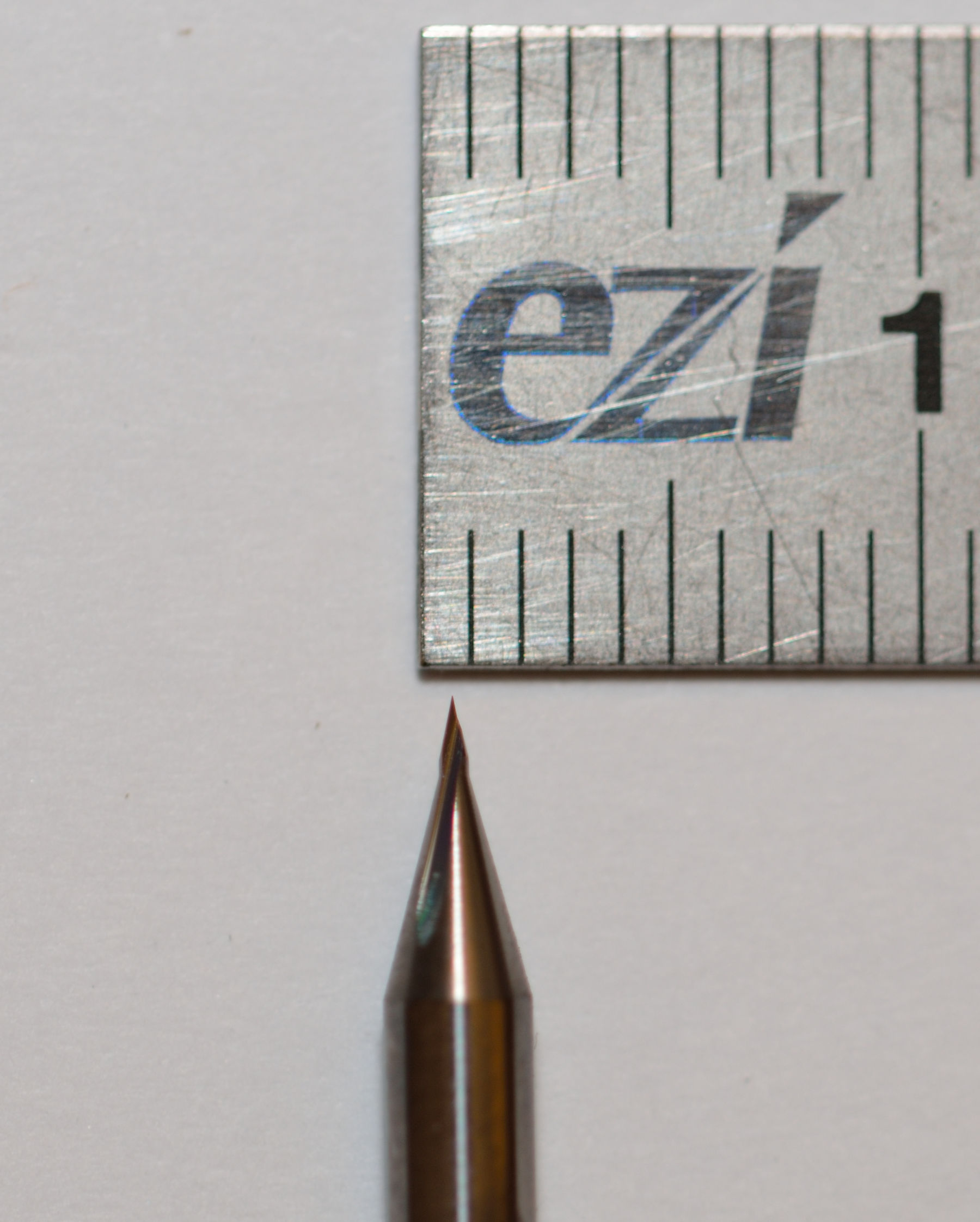 On the new UR-100V Time and Culture I, URWERK has updated the SpaceTime complications relevant to the watch’s inspiration. Once the 60th minute has passed, the minute hand disappears and reappears as a kilometer counter. It illustrates the 524.89 kilometers that any person standing next to the Sun Stone travels through space in 20 minutes. The watch also displays the speed of Earth’s orbit around the sun, with a 20-minute span equal to 35,742 kilometers. This scale remains unchanged from the original UR-100V vision. 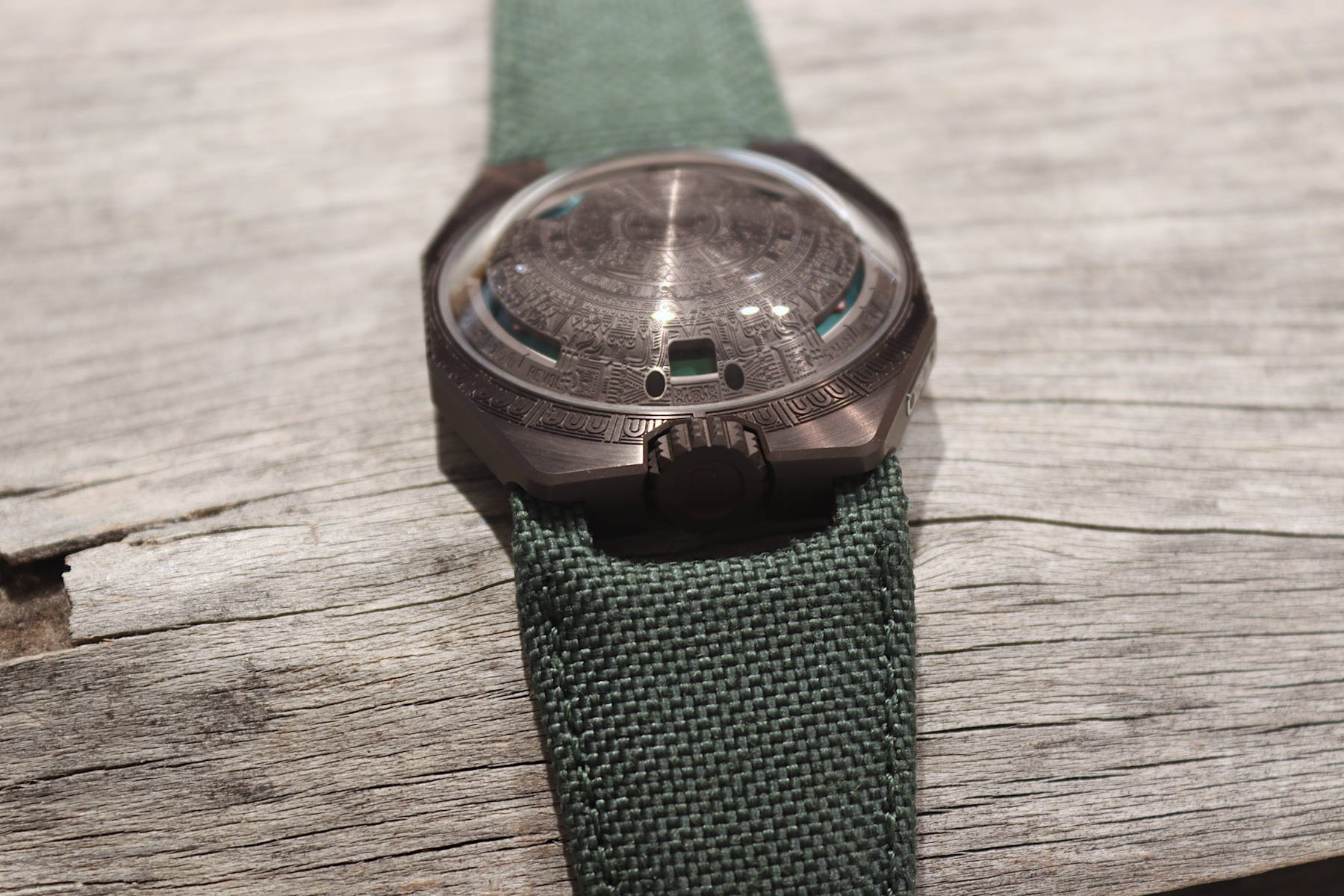 The Time and Culture I

The watch’s overall aesthetic features an earthy, natural color palette. The browns and greens play together well, evoking a vision of an ancient Aztec temple hidden away in the Mexican Lacandon Jungle. The steel case and titanium case back both received a brown PVD coating to complement the brass carapace, and a green Baltimora strap completes the watch. I adore URWERK’s Baltimora straps. They’re sleek, comfortable, and just the perfect accompaniment for the watch. In fact, the green one we see on the Time and Culture I is a new color in the brand’s repertoire.

If you ever get the chance to spend time with this watch, I urge you to do so. There’s so much to take in that cannot be fully appreciated from photos alone. Co-founder Felix Baumgartner said, “This timepiece has several interpretative keys, starting with its obvious universal significance: it is inspired by the Aztec culture; it was made in Switzerland, based on an idea from Singapore; it will end up in the windows of a retailer whose nationality is not yet known, and it will appeal to an equally unknown watch lover. Yet it also conceals certain secrets. We have sprinkled our work with hidden references. The discerning eye will be able to make out a signature, an acronym, a Mayan numbering to be deciphered. It’s a real treasure hunt.”

I don’t know about you, but I do like treasure… 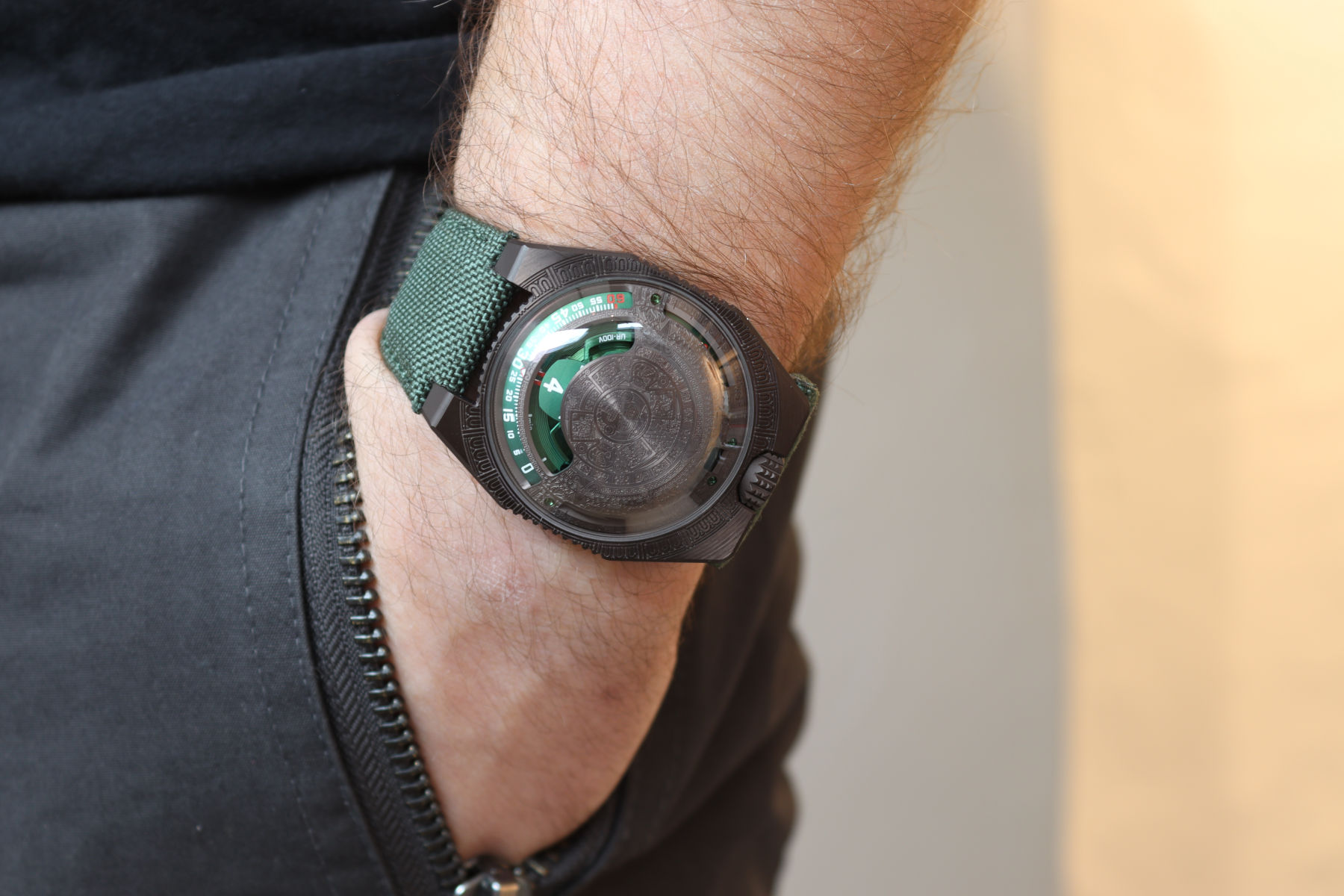 If you’ve read any of my numerous articles professing my love for the UR-100V, you’ll likely be able to imagine how excited I am by the new Time and Culture collection. Along with the fantastic Aztec-inspired model we see here, I’m excited to know that URWERK is pledging to continue exploring this theme using the UR-100V as the base. The future is bright; the future is URWERK!

Find out more about the new Time and Culture collection on URWERK’s official website.