URWERK Visits The Final Frontier With The New UR-120 “Spock”

My well-publicized love affair with URWERK continues today as the brand launches a brand-new model to the collection. The URWERK UR-120 is an evolution of the discontinued UR-110 with a whole host of new tricks up its sleeve. Nicknamed the “Spock”, this may give you a slight hint as to the watch’s coolest new feature. Since when did a watch display the time using the Vulcan salute? Wondering what on Earth I’m on about? Well, read on!

I’m sure we’re all familiar with the classic Vulcan salute. I knew how to do it before I knew what it was. Seeing people in school trying to hold their hands up and part their fingers between the ring and middle fingers to form a “V” shape. Not everyone I know can do it; it seems to be one of those things like folding/rolling your tongue. The accompanying salutation, “Live long and prosper,” is a unifying theme among Trekkies worldwide. 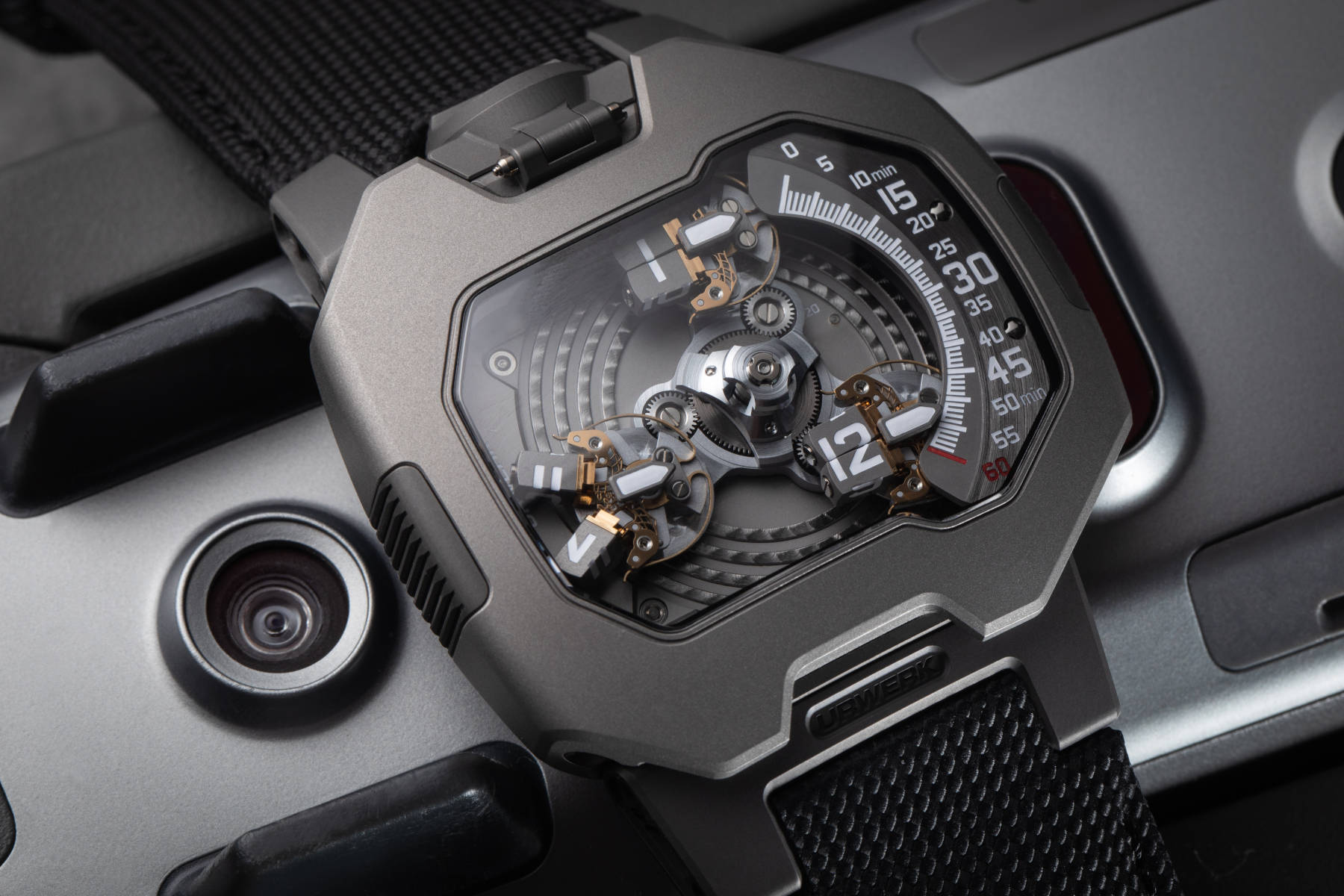 The UR-120: The Final Frontier

You only have to look at practically any one of URWERK‘s watches to understand there’s a fascination with space and Star Trek-type design. While the watches all have very different inspirations, the futuristic expression of these inspirations is a unifying feature across the brand’s entire catalog. It’s something that is integral to the brand’s DNA. Now, with the new URWERK UR-120, the brand has literally presented the Vulcan salute and what it stands for right there on top of the mainplate. It’s a technological marvel and an absolute pleasure to see in action.

My first exposure to the UR-120 actually came back in March. The watch was in the early stages of prototyping but on a visit to the brand’s Atelier in Geneva (which is supposedly one of the oldest buildings in all of Geneva!), I was fortunate to be shown some of the early prototype parts: The case and the mainplate. That’s not a huge amount to go on, but after a quick explanation and seeing the technical blueprints, a picture began to form in my mind. I had to sit and let those pictures percolate until I finally saw the finished watch. Did it live up to my expectations? I’ll be honest, URWERK has never failed to exceed my expectations, and it hasn’t started now. 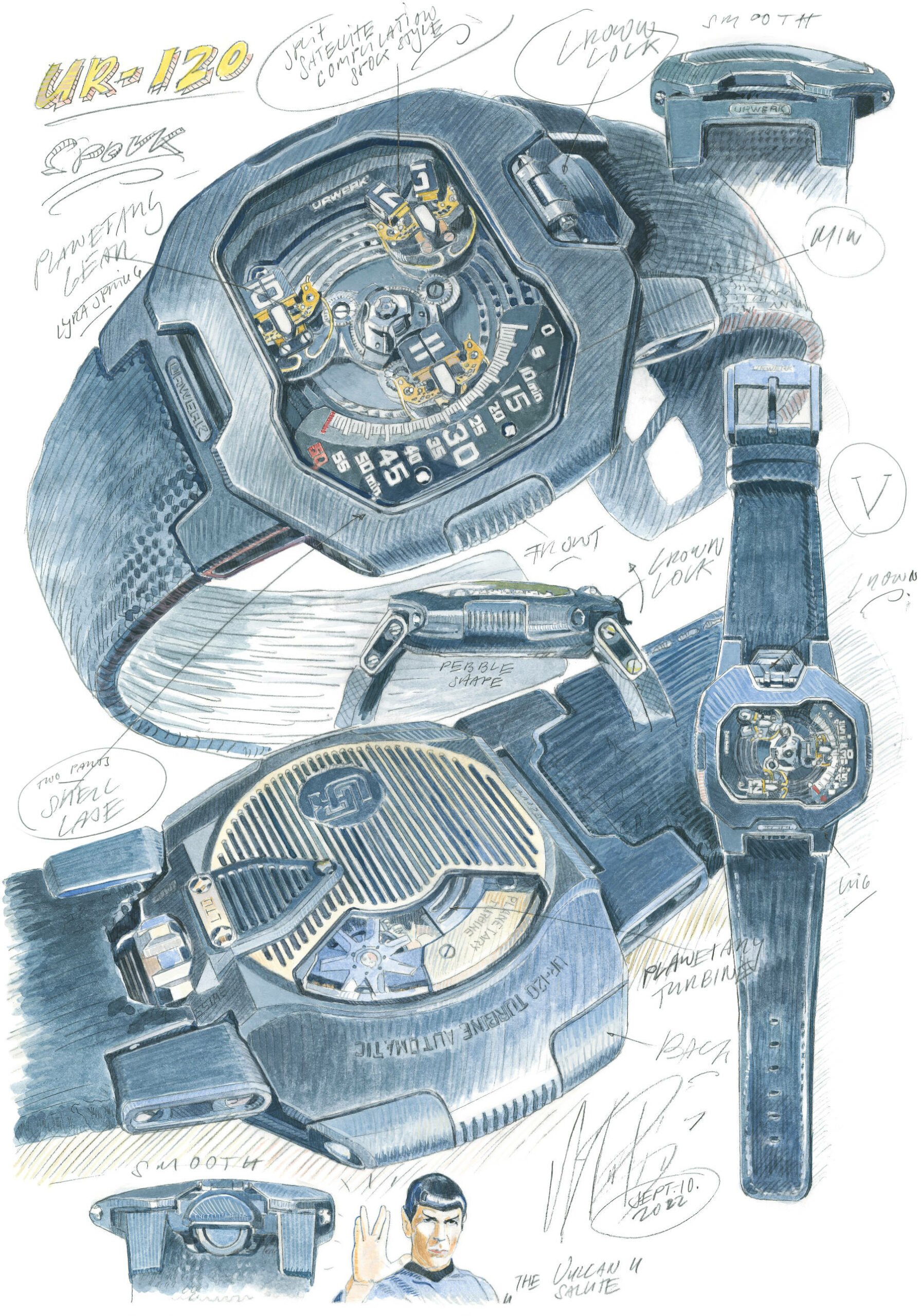 Did I mention that it’s a technological marvel?

The UR-120 is a technological marvel. I think it’s the third time I’ve said that in this article so far, but by Jove, I mean it. As mentioned, the UR-120 is an evolution of the UR-110. The UR-110 continued URWERK’s radical tradition of using orbiting satellite complications to tell the time. The UR-110 always showed the time on the right side of the watch. The UR-120 continues this, albeit with a radical twist, thus reshaping the concept. 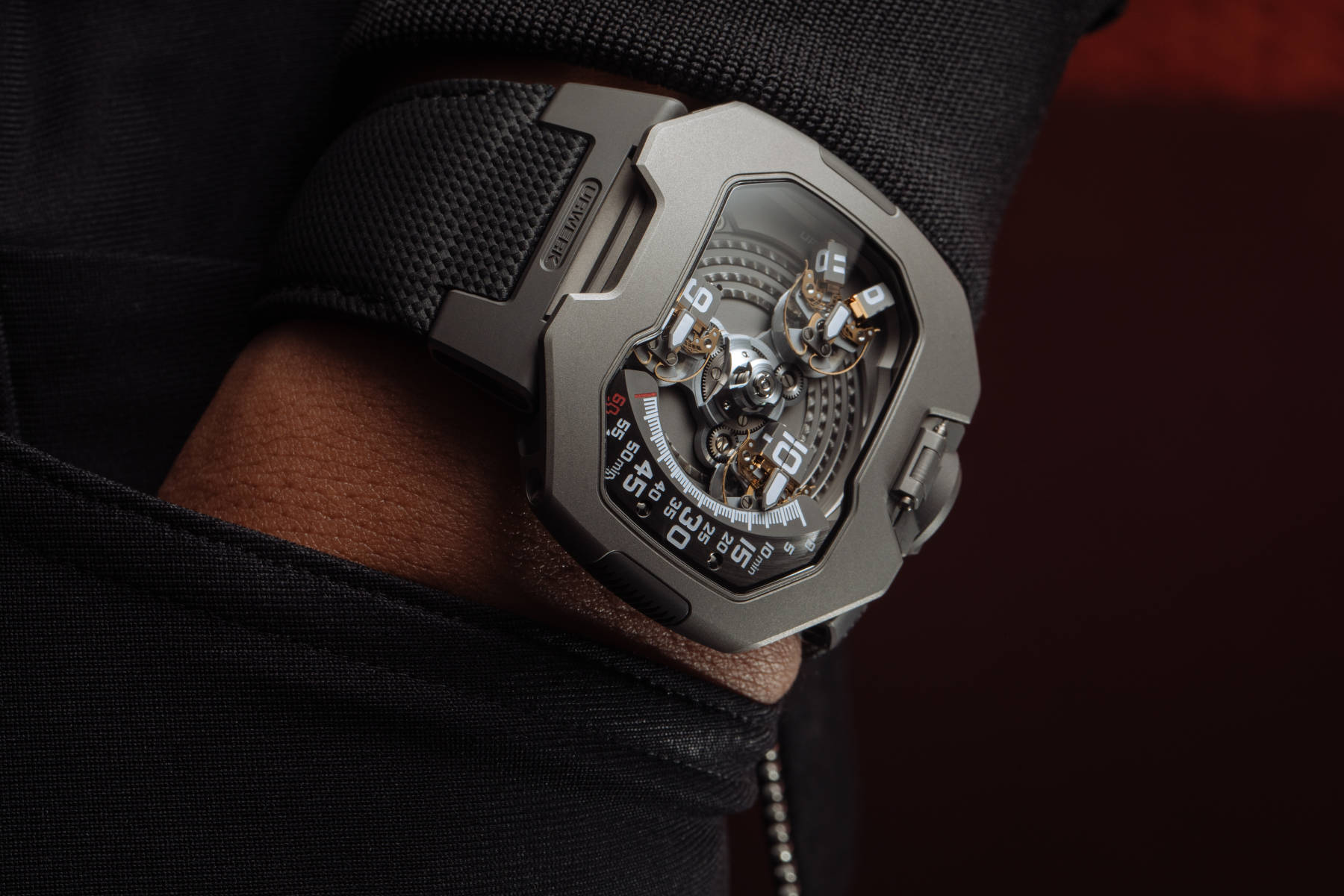 Rather than the single-piece hour cubes deployed on the UR-110, the UR-120 uses two-part satellites. As time elapses and the satellites revolve around the dial and move into position to change to the next hour, they split in the middle into the iconic “V” shape as in the Vulcan salute. Both these individual pieces rotate on their own axis and close up to display the new digital hour. Apart from looking damn cool, the question is “why”? Well, by doing this, it enables the satellite cubes to be much thinner. Instead of the whole hour digit needing to fit on the side of a single satellite piece, only half of it does as two pieces now come together as one. This reduction in thickness is reflected in the overall thickness of the watch. While the UR-110 wasn’t exactly super chunky (nor entirely svelte), the UR-120 is noticeably thinner and lighter on the wrist. 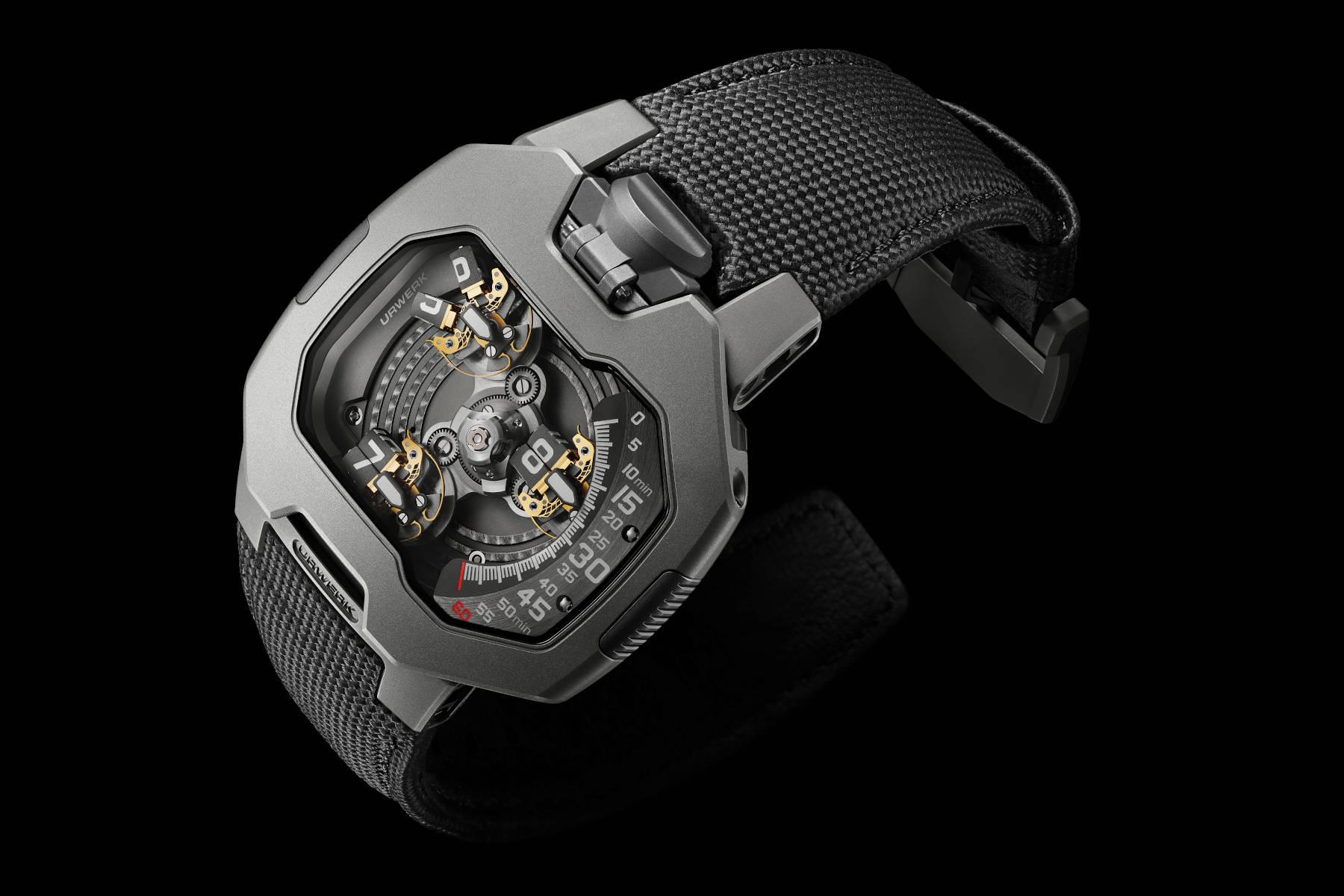 The UR-120 is a pleasure on the wrist

At 44mm long, 47mm wide, and 15.8mm thick, the UR-120 case stands out with its perfect sense of ergonomics. As with many of URWERK’s horological creations, the raw numbers undersell the product. The clever design and careful sculpting of the case give an end product that significantly overachieves comfort and wearability based on what its on-paper measurements might otherwise suggest. Maximum height is reached in the middle of the sapphire glass, at the apex of a gentle curve. The upper part of the case is totally smooth, without a single screw or notch, offering perfectly fluid lines.

It’s interesting to note the smoothness of the case. I feel this could be a vital moment in URWERK’s history that we look back upon in the future. Where most of URWERK’s previous watches have been somewhat angular and “industrial-futuristic”, the UR-120 feels wholly different. Gone are the sharp, industrial lines and angles. Instead, we see organic curves and smoothness. The futuristic elements remain, but this is an organic-futuristic re-interpretation of URWERK’s key design language. The exciting thing for me is now waiting to see whether the Swiss brand furthers this organic exploration in its other watches. Just imagine something like the UR-100 in a new, smoother, sleeker curved carapace. It gives me excited shivers just thinking about it. 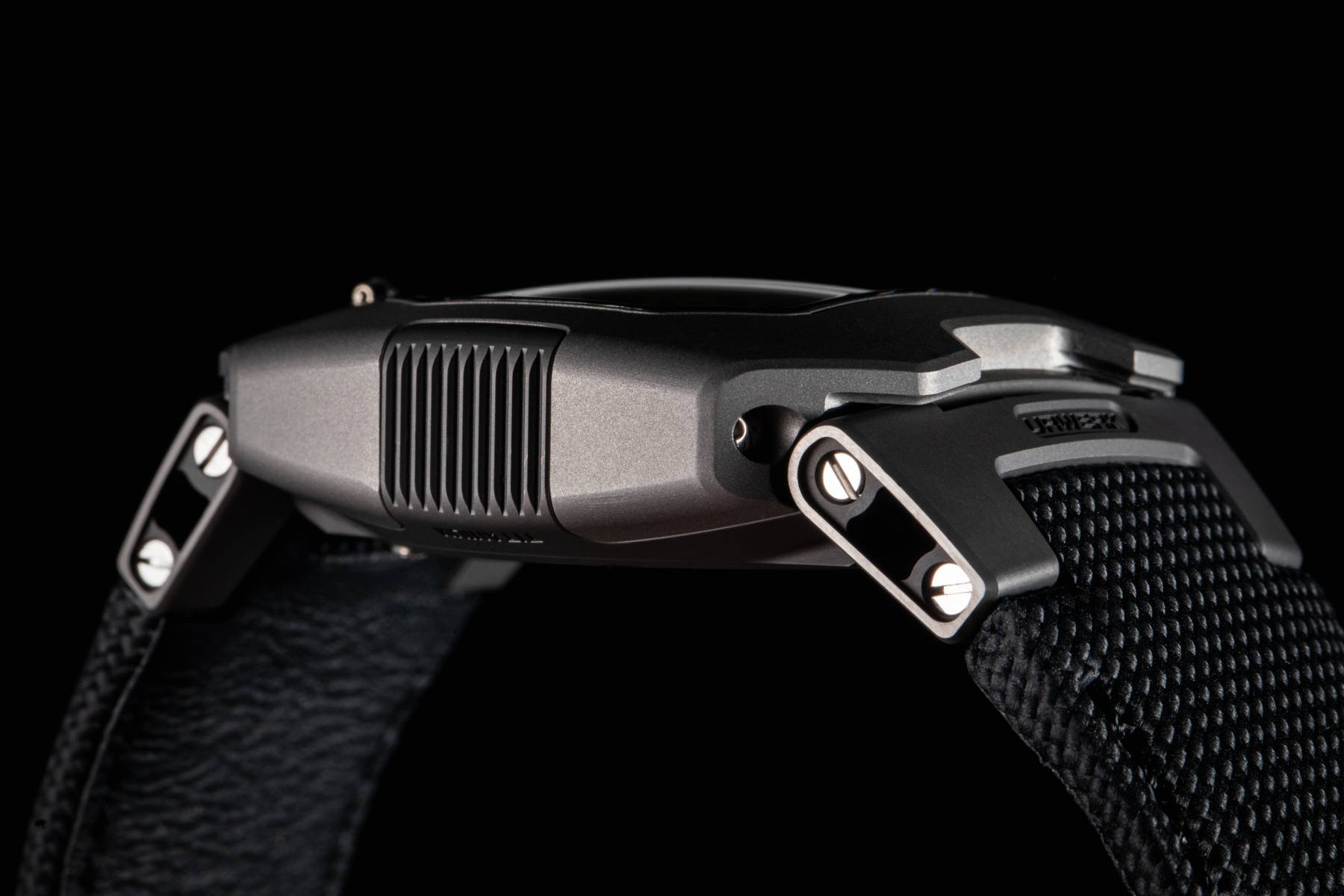 URWERK UR-120 price and availability

I love the UR-120. I mean, let’s be honest, there’s been very little out of URWERK’s atelier that I have not loved, but the UR-120 possibly usurps my beloved UR-100 as my URWERK grail. As with any of the brand’s watches, it does not come cheap. Interested parties will have to hand over CHF 100,000 (ex taxes). However, considering that this is a technological work of art and a possible crowning moment in URWERK’s history, the price is much more manageable compared to some of its other models. The equally impressive UR-112 retails for around CHF 250,000, and the UR-220 retails for around 144,000. By comparison, the UR-120 seems like a real bargain. Now, does anybody have 100k lying around to let me permanently borrow?

The UR-120 is limited by production rather than quantity. Find out more about the URWERK UR-120 on the brand’s official website.