A Rattrapante pushed to the limits
Andreas Ahrens
comments 3
Share

Vacheron Constantin presents a strictly limited split-second chronograph (Rattrapante) as an addition to its Excellence Platine collection. The movement inside this watch is a modern interpretation of a classical Rattrapante movement with a number of enhancements, including a peripheral winding rotor. Almost every other part of this watch is made of platinum.

Traditionelle Split-Seconds Chronographe Ultra-Thin Collection Excellence Platine is a strong contender for one of the longest names for a watch model. This name also is a funny mixture of French and English words. The French words “Rattrapante” and “ultraplat” the brand obviously considers too exotic for an international audience. Nonetheless, this name conveys almost everything a potential customer needs to know about this watch. It is part of Vacheron Constantin‘s Traditionelle family of watches, which gives a hint that the design is a more classical style. It is a split-seconds chronograph in an ultra-thin execution, and the case material is platinum. Is there anything else to know about this watch? Yes! 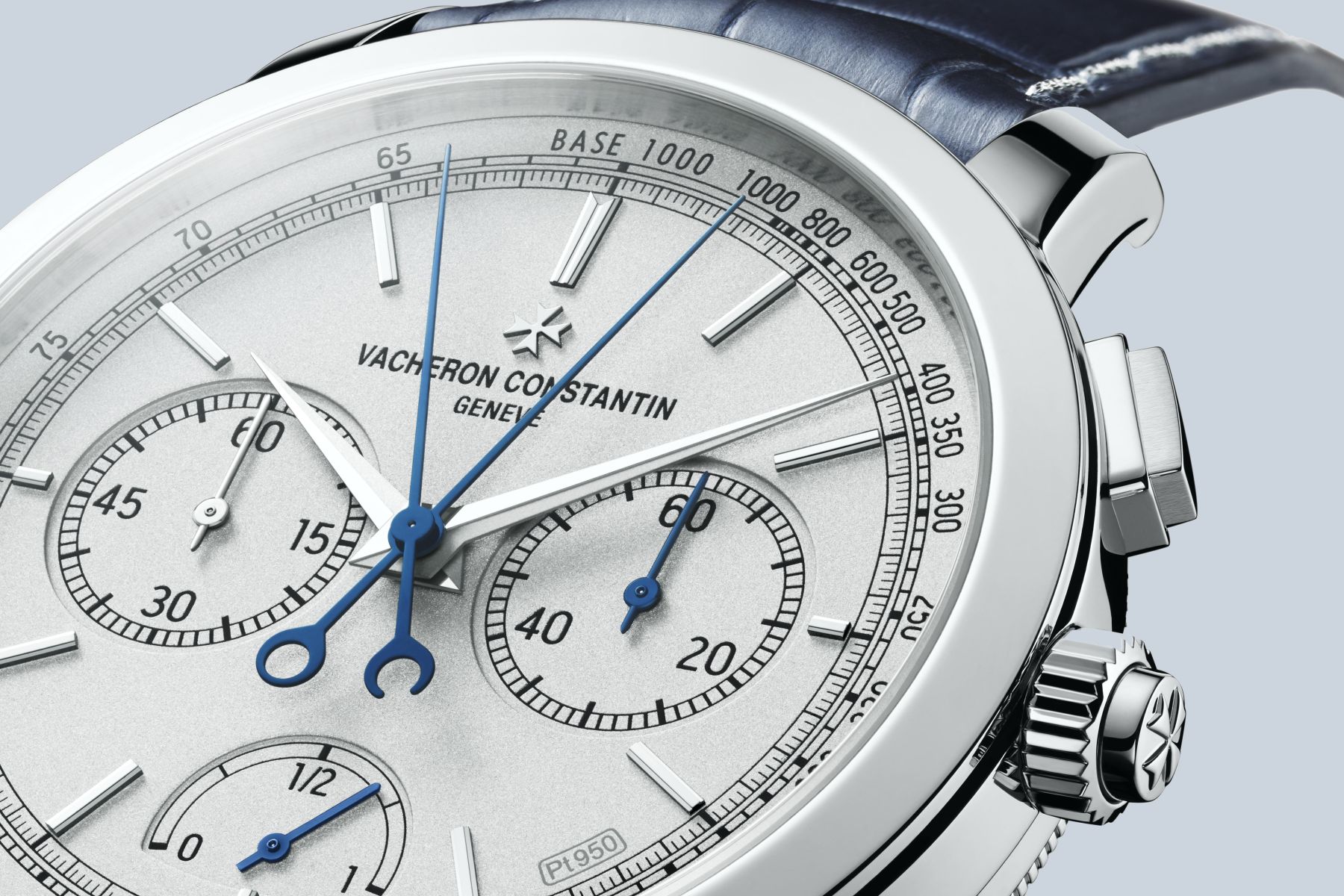 In addition to what a normal chronograph does, a split-second chronograph allows measuring intermediate intervals. Because the watch we look at here is a so-called monopusher chronograph, there is only one button to start, stop, and reset the stop function. This is the button, which is integrated into the crown. Just as with a common chronograph, you start the time measurement by pushing this button. The central blue hand starts to move, counting elapsed seconds. The blue hand in the totalizer at three o’clock counts elapsed minutes. Pushing the button a second time stops the chronograph function. A third push resets the blue hands to their zero positions.

The French word for catching up is rattraper which led to the traditional term for this functionality: Rattrapante.

What might appear like a minor extension to a chronograph’s usual function requires an intricate mechanical realization. 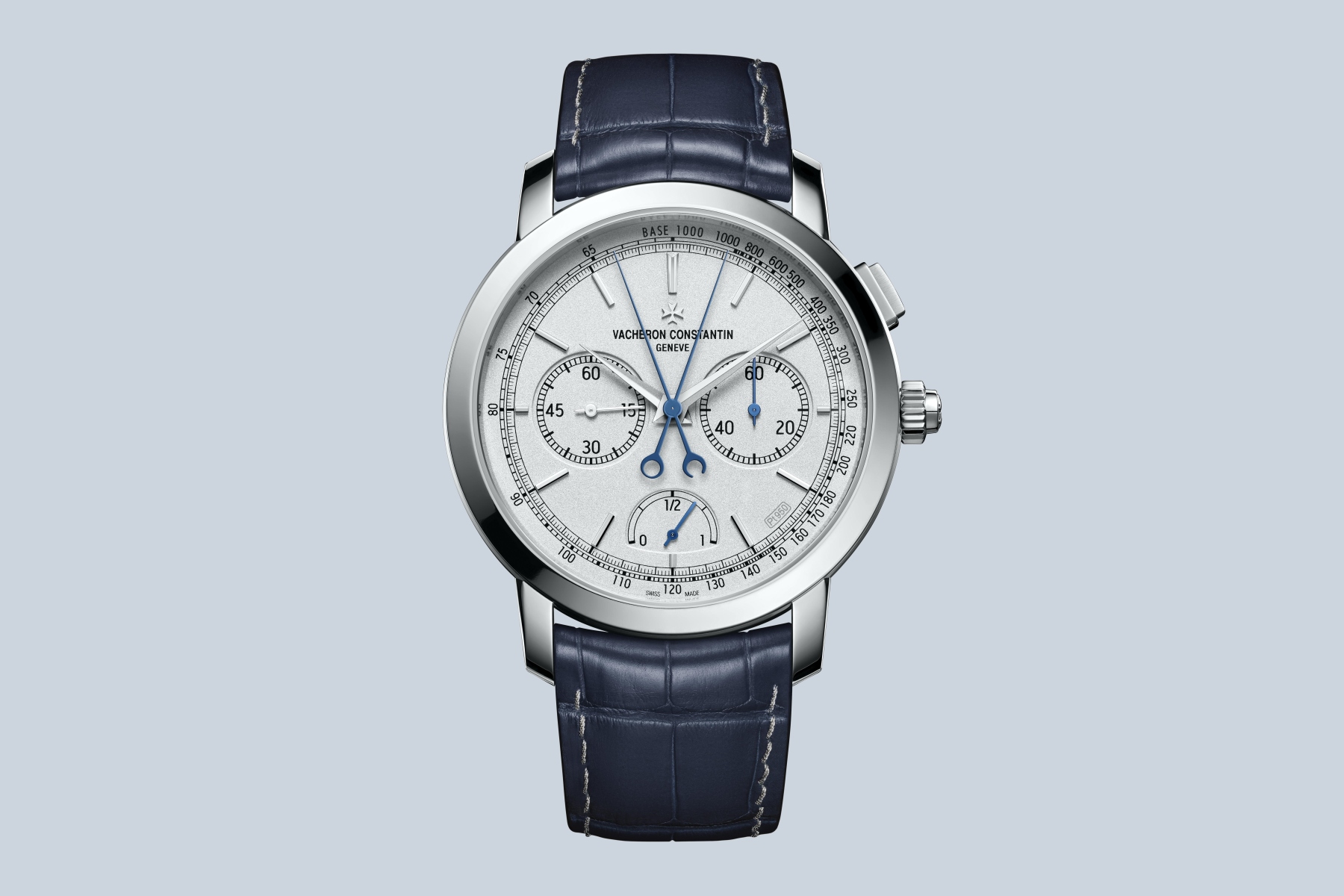 The brand has applied platinum to a maximum extent in this watch. The case, the crown, the pushers, a folding clasp, and even the dial consist of this noble metal. Even the yarn used for the strap’s stitching is a mixture of silk and platinum. This naturally entails a monochromatic look of the whole watch. This watch’s design strictly follows the style guide established by the other watches belonging to Vacheron Constantin’s Excellence Platine series.

The dial has a finely grained (sand-blasted) surface which prevents reflections but doesn’t alter the color impression of the metal. The chronograph minute counter at three o’clock, the small second at nine o’clock, and a power reserve indicator at six are slightly counter-sunk but exhibit the same surface structure as the rest of the dial. A tachymeter scale along the rim of the dial adds a touch of instrument character.

The dauphine hour and minute hands and the baton hour markers expose a superb execution. The counterweights of the needle-like hands that serve as central seconds counters appear incongruous in the context of this dial. The small subdial hands, especially the one at the power reserve indicator, look uninspired and don’t match this exquisite traditional timepiece.

It is rather slim for an automatic split-second chronograph.

All surfaces of the 42.5mm case are polished. The screw-in bottom has a knurled outer edge, which appears a bit useless and strange to me. The case is 10.72mm thick. That, in general, is not exceptionally flat recalling the “ultra-thin” in the name of this watch. But, it is rather slim for an automatic split-second chronograph. The thin and slightly tapered lugs curve downward to make this watch’s almost sporty diameter wear unobtrusively. 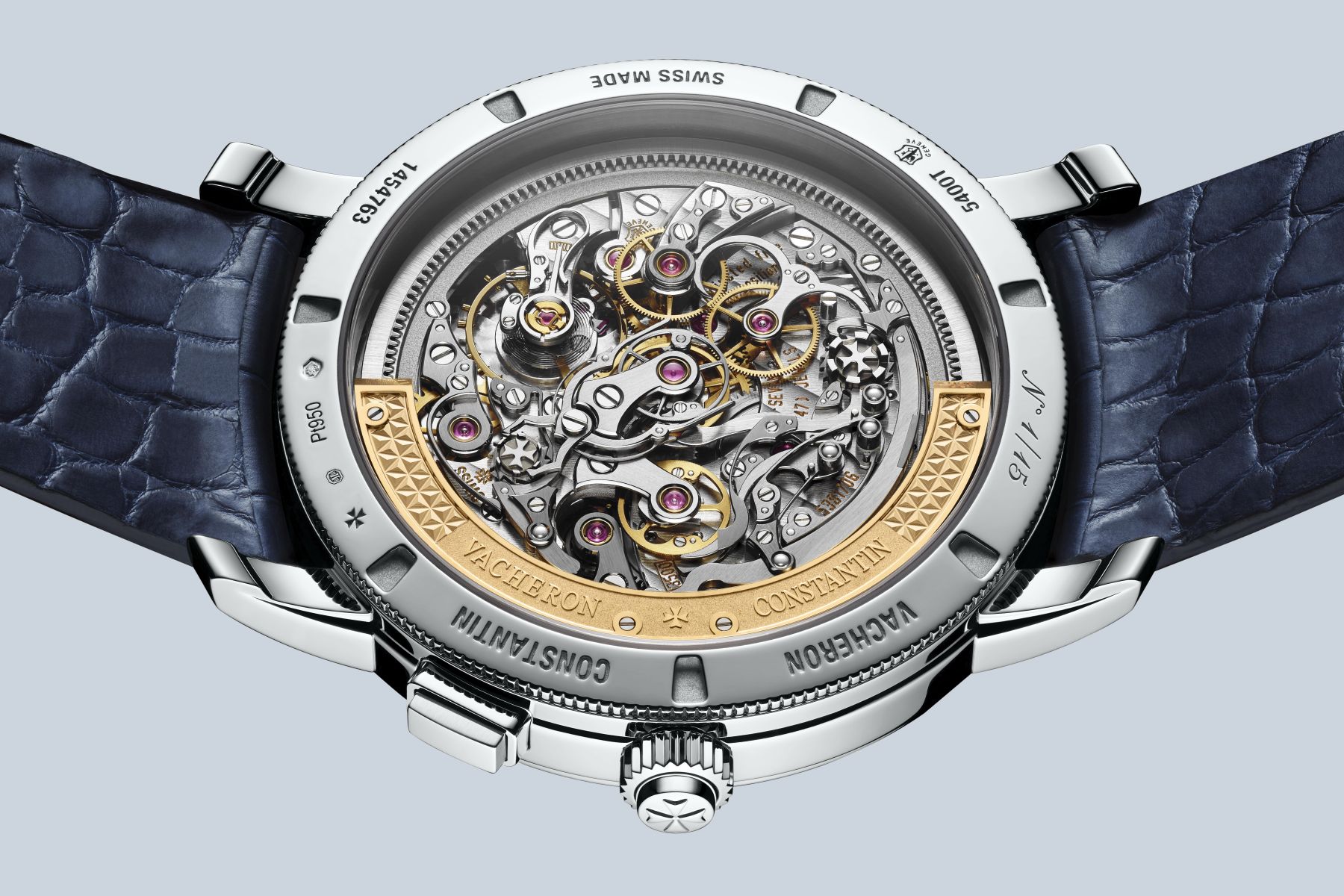 Vacheron Constantin’s in-house caliber 3500 is working inside this watch. This movement showcases an impressive mix of traditional movement design and modern enhancements. It is one of the thinnest self-winding split-seconds movements.

At first sight, the complexity, the three-dimensionality, and the delicately curved levers captivate the observer. Then, the peripheral winding rotor and its clearly visible gear rim form an unfamiliar addition. Looking back at the center, you discover the pincer-shaped mechanism that is the essential element of a traditional split-second chronograph and the wheels that form the lateral clutch actuating the chronograph hands. Impossible to miss are the column wheels that control the chronograph functions. Here these are cutely adorned by Vacheron Constantin’s trademark, the Maltese cross. Many parts of this movement are decorated by hand at a very high level. 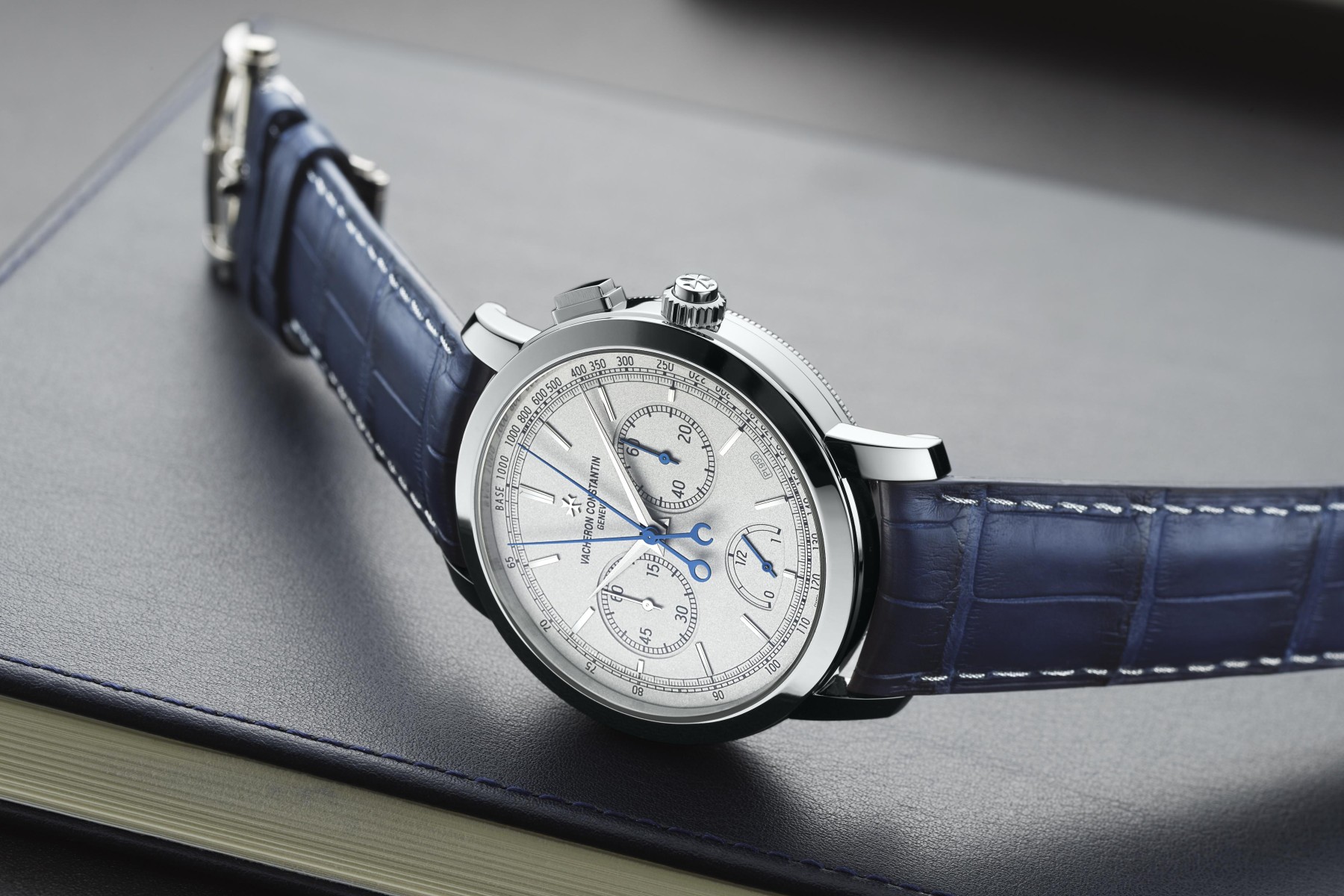 For those who are not hopelessly hooked on platinum, this watch’s highlight is that impressive caliber 3500, combining traditional and modern influences in a unique way. The brand’s Harmony Ultra-Thin Grande Complication Chronograph from 2015, also made of platinum, is the sole other watch containing the caliber 3500. The brand is limiting this watch to only 10 pieces. This yields only 25 watches containing this movement.

The price of the Traditionelle Split-Seconds Chronographe Ultra-Thin Collection Excellence Platine in The Netherlands will be €315,000, which, despite all exclusivity, is ambitious.

Visit the website of Vacheron Constantin to acquire extensive information about the brand and its products.

Hot Topics
RJ’s Top Five Alternatives To The Omega Speedmaster Professional
95 comments
The Top Five Alternatives To The Rolex Datejust
91 comments
We Need Luxury Solar-Powered Quartz Watches From Rolex, Omega, Breitling, And Grand Seiko
70 comments
Above And Beyond: When And Why Paying Over Retail For A Watch Makes Sense
63 comments
My Guilty Pleasure Watch: The Chanel J12 Marine
48 comments
Popular
Two Patek Philippe Nautilus Watches: 3700/1A Versus 5711/1A
Robert-Jan Broer
13
You Asked Us: Nomos Orion as a dress watch?
Gerard Nijenbrinks
2
Speedmaster Speedy Tuesday 2 “Ultraman” – Out Now! (Live Pics and Video)
Robert-Jan Broer
32