Hands-On: Verax 420 V01.01 Meca-Quartz Chronograph — Is It Brilliant Or Bananas?

If you're looking for restraint, you've come to the wrong place
Rob Nudds
comments 10
Share

I’ve seen some wild things in my time. I don’t even need to include my life outside of watchmaking in that statement for it to hold fast (and yes, I do have a life outside of watchmaking before any smartypants mention that in the comments — it just happens to be very small and stunningly uninteresting). Yes, a life spent at and around the bench has thrown some real treats and travesties my way. I’ve seen watches from big brands, small brands, brand-new brands, and reborn brands alike. I’ve seen classics and failed attempts at breaking through the sapphire ceiling in even measure. Until this summer, however, I’d never seen a Verax. Now that I have, I’m not sure I’ll ever be the same again.

Oh, ho, ho — which way’s he gonna go? I can almost hear you asking the question. Well, let me cut to the quick: this is not a positive review, although it’s also not an entirely negative one either. The Verax watch I was sent perplexed me more than anything else. In fact, it perplexed me, a man of almost two decades experience in the watch industry, so much that I came to the conclusion it probably isn’t a watch at all.

…somewhere, some Cristiano Ronaldo wannabe is thumbing his man purse…

At least, it isn’t the kind of watch meant for me and my cohort. But does that mean it’s wholly bad? I’m not arrogant enough to think that (especially not without giving it due consideration). As such, I came away pretty convinced that this kind of “thing” has a market. It isn’t me. It might well not be you, either. But probably, somewhere, some Cristiano Ronaldo wannabe is thumbing his man purse musingly, thinking about buying this item. And you know what? He probably should. 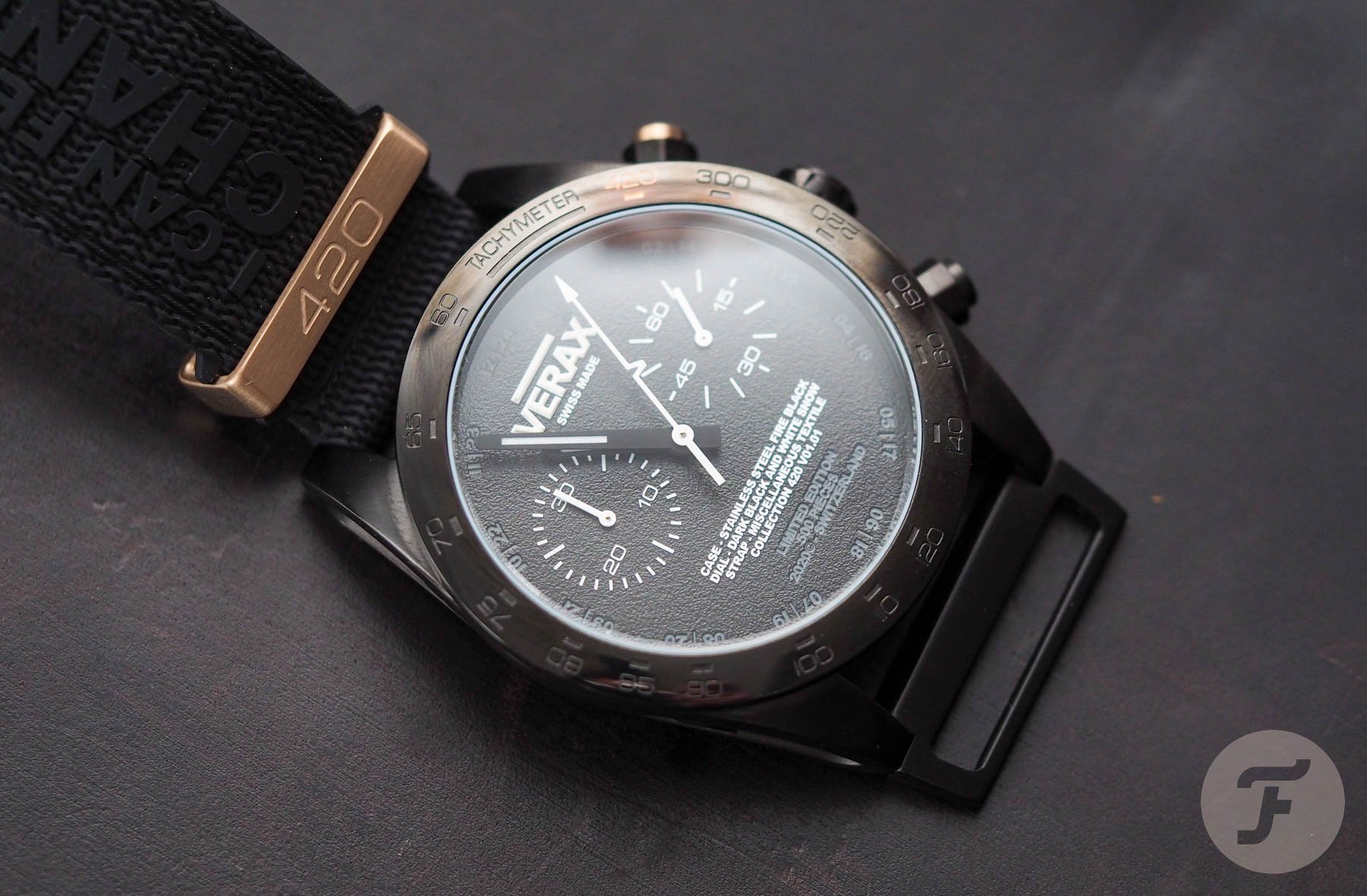 How’s that for an illustrative sub-title, eh? It’s funny how placing what would be regarded as a heinous crime these days in the rose-tinted era of the ’50s makes it seem almost quaint… But I digress. This watch is about as in-your-face as a non-skeletonized, non-bejeweled, non-mechanical watch can be. Powered by a reputable meca-quartz movement from Seiko’s wholesale arm, Time Module, the Verax has the same engine as popular brands such as Nezumi, Furlan Marri, and SYE.

…there are so many things I almost like about this watch…

In every other way, it is different. Where Furlan Marri is classy, Verax is classless. Where Nezumi chooses to honor the past, Verax attempts to harass the present. And where SYE breaks new ground in design, Verax breaks the hearts of well-intentioned watch journalists the world over. Why? Because there are so many things I almost like about this watch that I genuinely believe it could have been good. It could have had its name mentioned in the same respectful breath that just brand-dropped three price-point competitors. 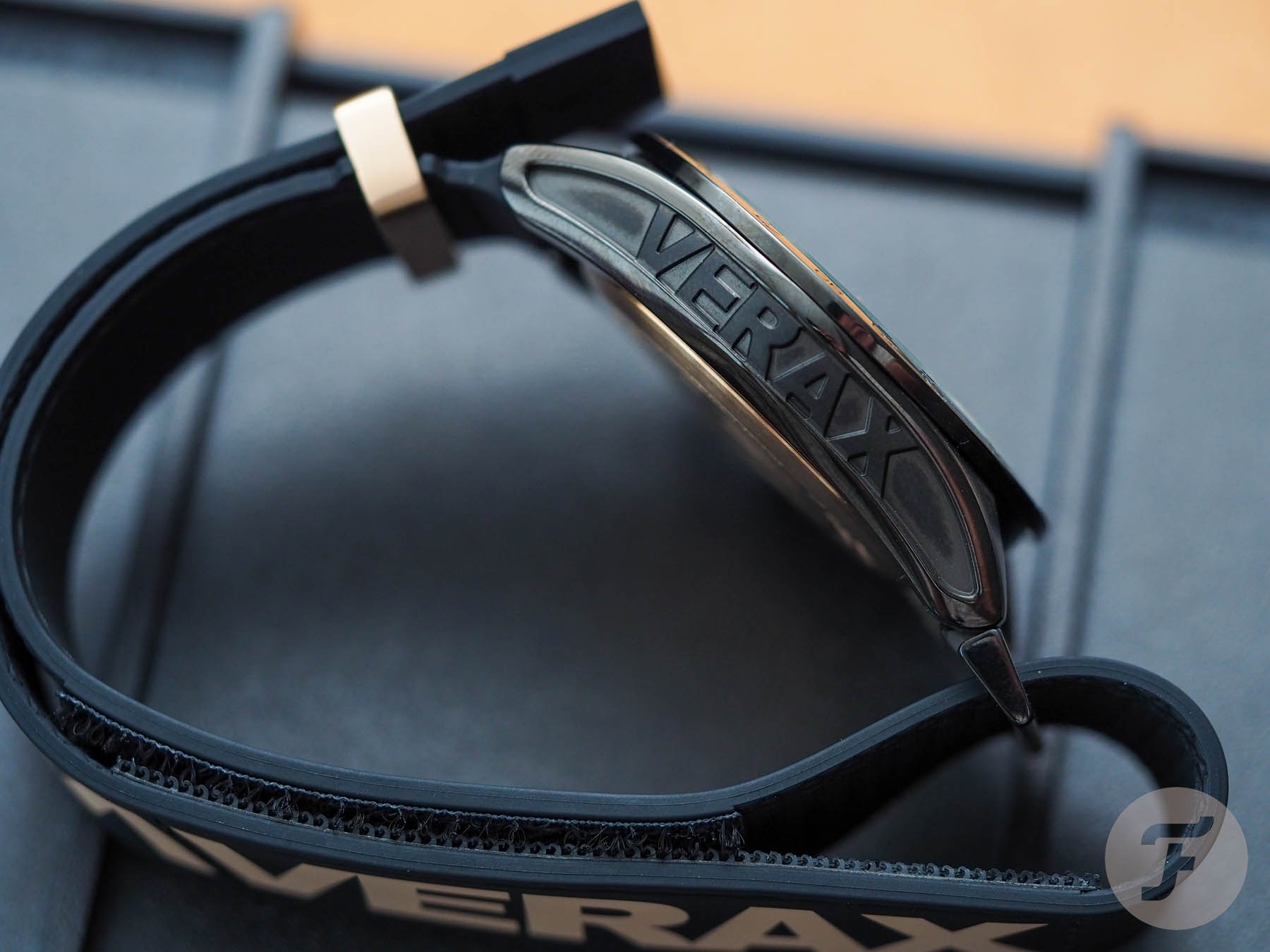 Let’s talk about the watch head

I don’t want to go down the rabbit hole here, so I’ll try to be quick. This is a fashion product. It is an exercise in branding. I do not believe it should be viewed in the context of serious watchmaking (and yes, I do believe meca-quartz and serious watchmaking can be mentioned in the same sentence). 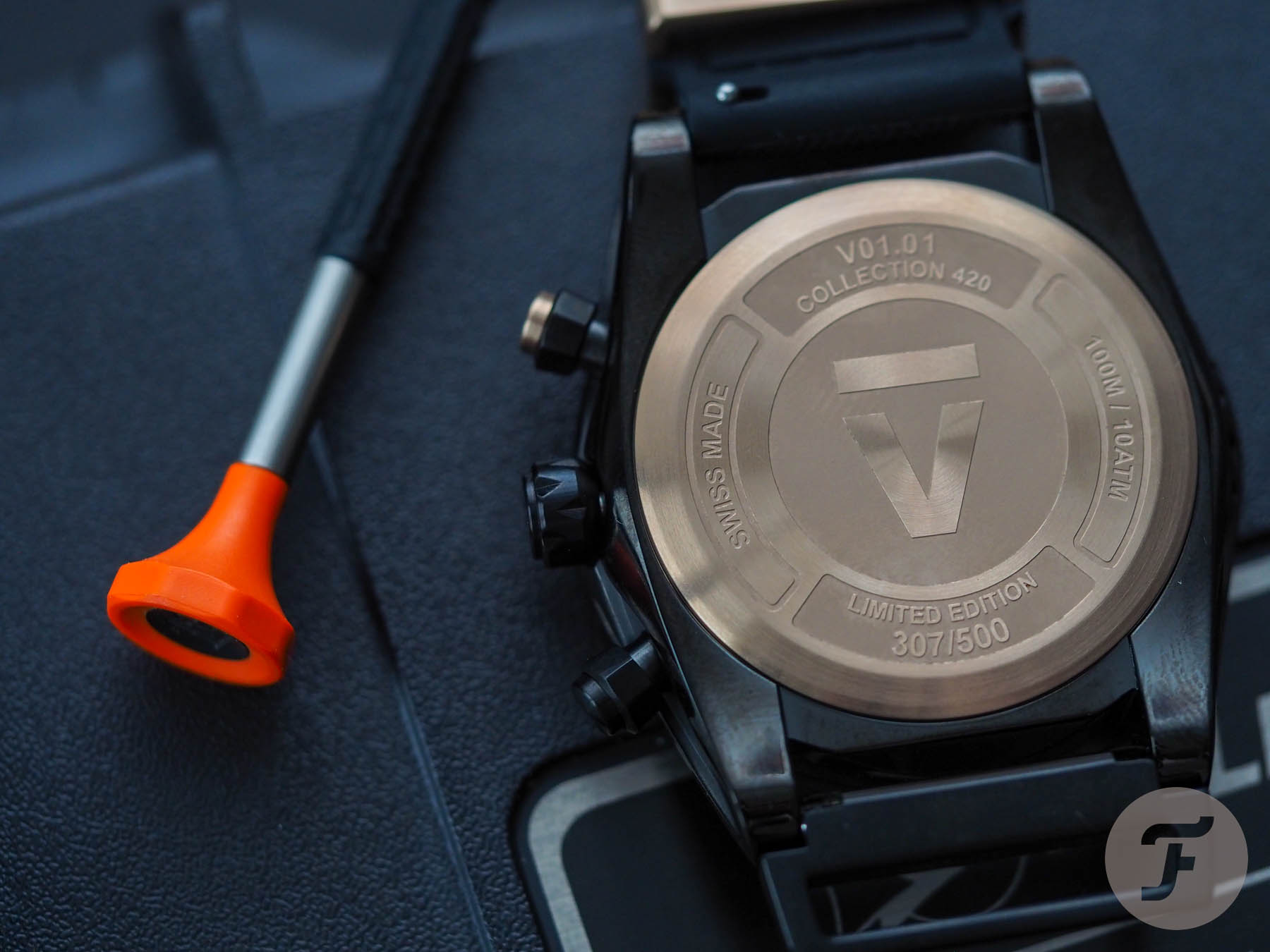 It’s black. Normally I don’t like black watches, but this thing gets a pass on that front because it is an accessory. The rose gold-colored IP-plated case back is very nicely done and one component I wouldn’t change in a second draft. The gloss black bezel is moody and cool. I’m fine with that. The case band, however, is horrendous. The brand’s wordmark, which, in itself is actually quite cool and to my taste, is molded into the left-hand side of the case. It’s crass. It’s unnecessary. Even when a brand as universally respected as Blancpain does it, it splits opinion. Brands should really realize that sometimes less is more. The reason most brands don’t mess around with the bare left-hand side of a right-hand drive watch is because it doesn’t need to be messed around with. Exercise some restraint, for heaven’s sake.

Don’t try and do too much.

And that’s exactly the problem with this watch: restraint is completely lacking. It is everything to the nth degree. I’ve never advocated the “kitchen sink” approach, and I prefer brands to keep their powder dry where possible. Don’t try and do too much. It’s especially risky at this price point. Not only do budget constraints mean what you can actually do is limited, but those same constraints also mean that the execution of any lofty pursuits is similarly capped. 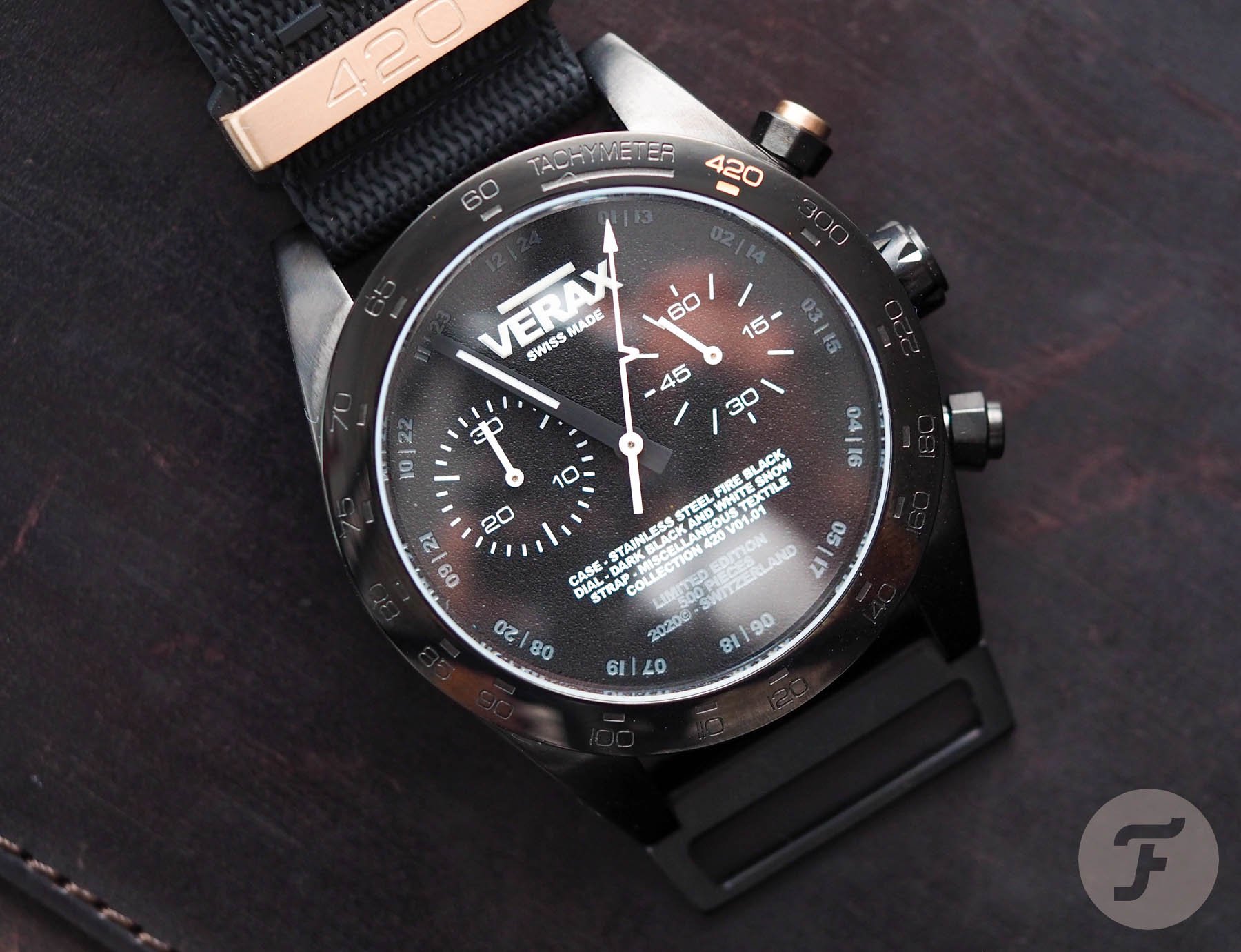 Who needs decent AR anyway? The sun’s going to explode any time now…

Let’s move onto the dial. The novella of text between center and six is actually quite a nice sight in my opinion. But the way the gray portion of it has been applied is appalling. Again, I’m not slating the attempt, or, at the very least, the desire and the boldness to attempt it. But the way this notion has been realized is way off the pace for this developing market of meca-quartz warriors.

…born to capitalize on the sudden hype around just how good these “value” propositions can be when done well.

If I’m being honest, I think the design bar is a lot higher for these meca-quartz brands than it is for their mechanical peers. Basically, if a watch has a meca-quartz in it, it needs to be an expertly conceived and created concept. Anything less feels lazy and insulting. Half-baked projects that look to wow consumers with off-beat visuals seem born to capitalize on the sudden hype around just how good these “value” propositions can be when done well. 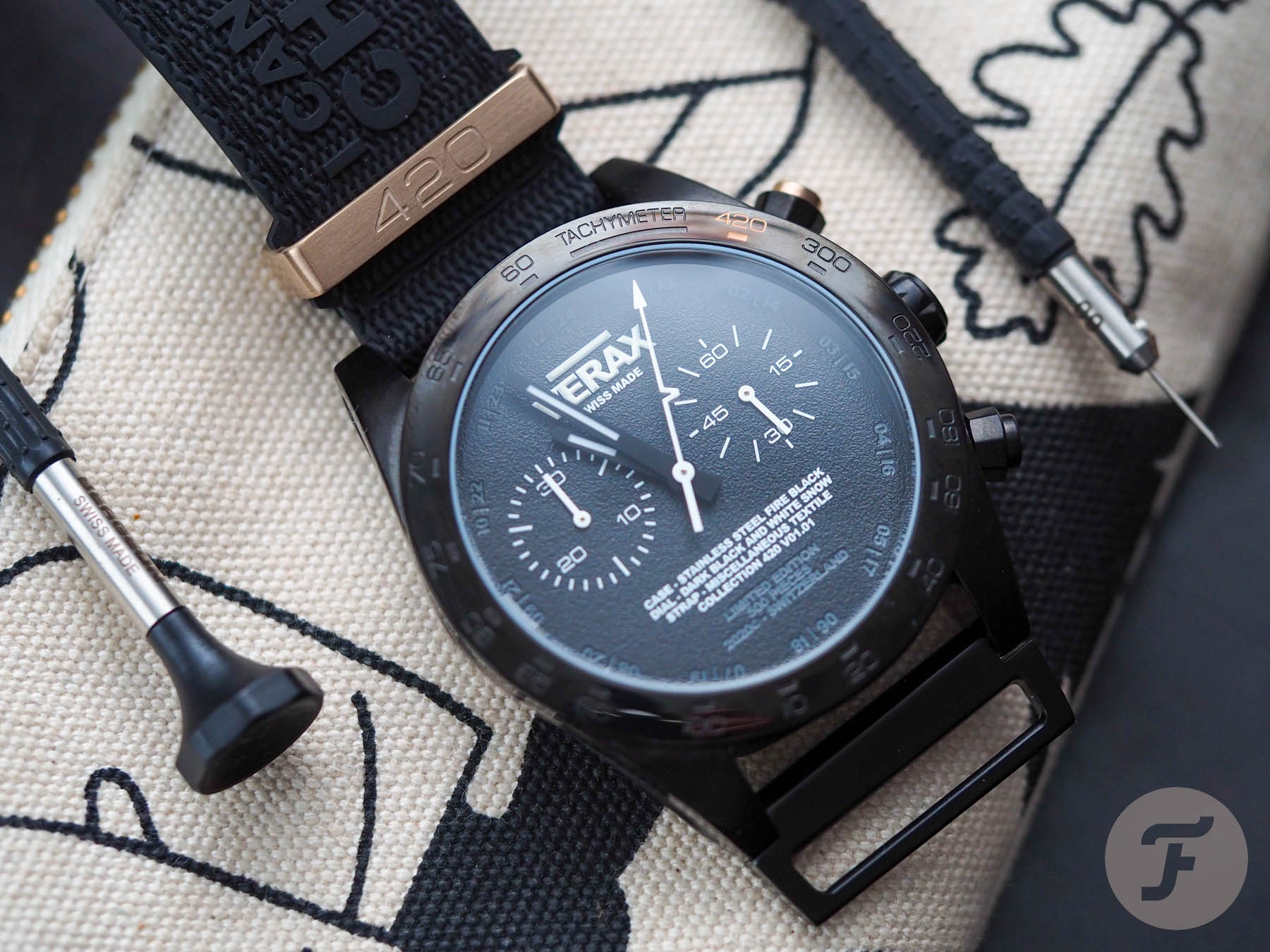 Any more for any more?

Back to the dial. I’m pleased to say that the Verax wordmark is luminous. In a similar vein, I am horrified to say that nothing else of use is.

I can see why a lot of elements that comprise this end product seemed like a good idea on paper. However, there has to be a realist with some experience somewhere in the industry that knows this isn’t going to appeal to serious watch fans. And maybe the brand knows that and maybe it doesn’t care. It is, of course, totally fine to ignore the watch market when you make a watch and pitch it as a fashion accessory and nothing more. It is just such a massive missed opportunity to do it well enough to appeal to both.

I saved the best till last

The strap is one of the most bizarre things I’ve ever encountered. I’m not sure what part of the body it’s supposed to be worn on, or to whom it should appeal. I don’t mind the style, per se, but in practice, it is less than useless. It’s a massive distraction, and I don’t know what to do with it. I can’t figure out where the tail end is supposed to go, as explained in humorous depth in the above video from my Instagram page.

All in all, I think if you take this watch for what it is — a fashion statement — and you go into the purchase with your eyes open, you might be satisfied. But its whopping €720 price tag is, quite frankly, absolutely ludicrous. Especially when you compare its quality to the models from Furlan Marri, the Verax here is going to be a tough sell. If the brand is still around in a few years and doing well, I’d love to review another one of its pieces to see if the serious watch community has become its target audience by then. Learn more about the Verax world here.