Vertex – The Real One of the ‘Dirty Dozen’

For a nation with an indisputably important role in the history of horology, the British occupy just a small section of the modern market.

At the very top end, Roger W. Smith continues the legacy of the late George Daniels from the Isle of Man base once used by the past master. In terms of mainstream visibility, it is Bremont that reigns supreme.

Now, hold your horses. There is a relative newcomer that might be about to shake up the status quo. Relaunched in 2016 by the great-grandson of the original founder, Vertex is a truly English company. Their history stretches all the way back to 1912 when a young Claude Octavius Lyons founded his first company, known then as Dreadnought Watches.

Having worked in the watch industry since he was 17, the young Lyons wasted no time in growing his operation. Following the early success of Dreadnought Watches, he decided to expand the business. The Vertex name was registered in both London and La Chaux-de-Fonds in 1916 and Lyons began securing contracts with Swiss brands to act as their sole importer to the UK. 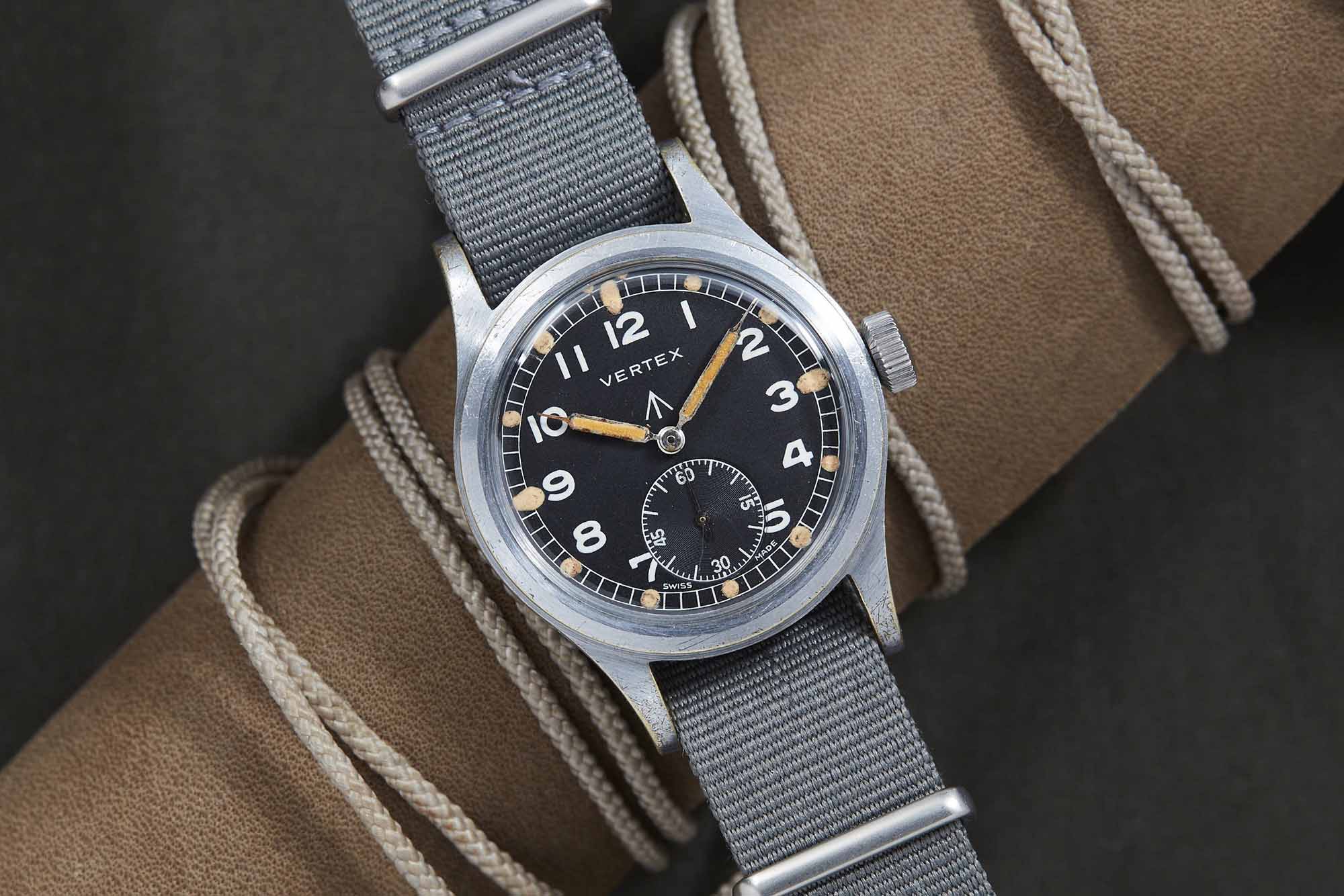 The history of Vertex has some fascinating chapters. Perhaps most relevantly to the design of their contemporary wares and their inevitable rivalry with Bremont, is the role they played in the British military campaign during the Second World War, not to mention the toll the War took on the company itself.

One year after Vertex’s Hatton Garden showrooms were obliterated by enemy shelling in 1940, Captain Henry Lazarus, Claude’s son-in-law by virtue of his marriage to his daughter Peggy Lyons, was asked by the British military to help source watches for the troops. By 1944, 15,000 units of the Vertex Cal 59 Nav had been produced in the company’s Swiss factories and rolled out to those on the front lines.

The reputation of Vertex was sustained after the war and their success continued until they ran into the insurmountable challenge posed by the quartz crisis. Sadly, after 60 successful years, Henry reluctantly closed the company’s doors in 1972.

Fast forward to 2016, Lyons’ direct descendant Don Cochrane brought Vertex back to life to become the current owner. As an independent company, Don could have chosen to go in any direction he wanted when laying out his plans for the reborn brand. In the past, Vertex had produced all manner of watches. In addition to the military-styled watches they released for the army, they were also known for dressier, classier pieces. 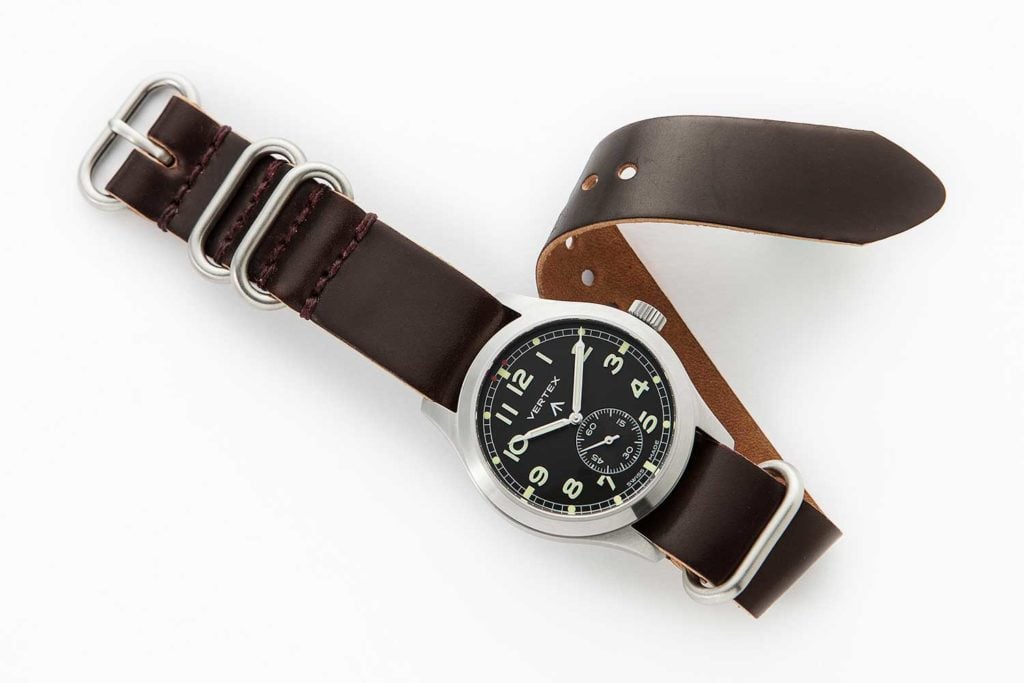 But Don plumped for the military style. It was, in many ways, the obvious choice given the pride associated with supplying WWII troops with essential tools during combat – a real involvement, not a marketing spin. Vertex was the only British member of the Dirty Dozen, the group of watch brands commissioned by the Ministry of Defence during the Second World War to produce reliable watches for those who fought in it, specifically British soldiers. Others of this group included Jaeger-LeCoultre, Omega, IWC, and Longines.

And just a few seconds of market research shows you one thing: British branding and the military go together like strawberries and cream on Centre Court. Then again, there might have been an element of keeping friends close, and enemies even closer. Remember that Bremont, Vertex’s inevitable rivals, are so close to the military they often feel like an autonomous wing of the government (it’s probably just a matter of time before they are…). 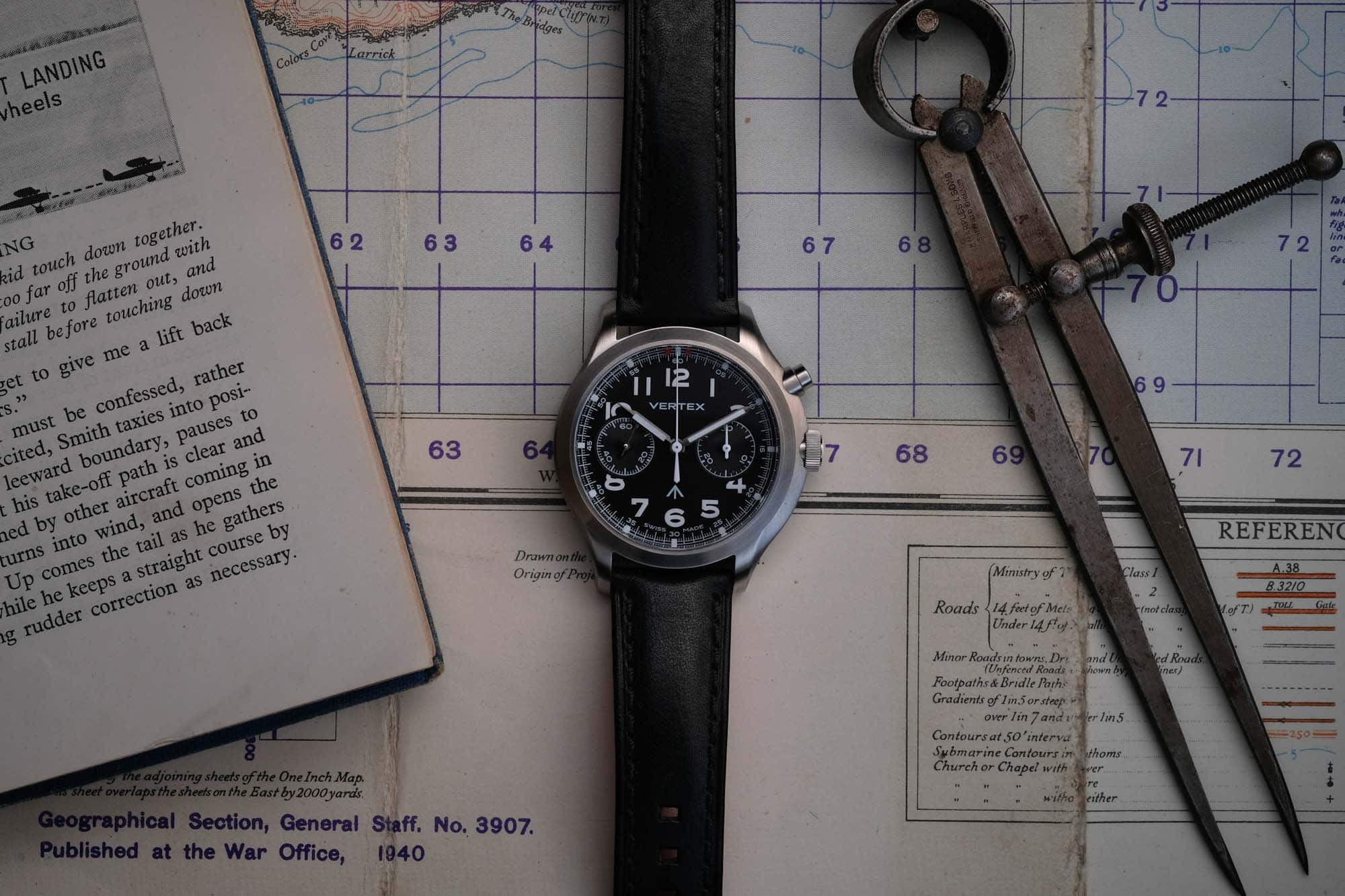 In fact, the similarities in the recent releases of both brands are startling. The Bremont HMAF Arrow looks like the striated twin of the Vertex MP45. With both watches retailing around €4,000 it’s a straight-up shoot out between the independents. As tough as the competition can be for brands treading a similar path, approaching a similar demographic, it’s great news for the consumer.

Competition forces brands to be better. Vertex, a fantastically dedicated little company, is throwing the kitchen sink (and the best china) at their arch-rival to lure customers away from the hypnotic marketing machine that is Bremont. The solid luminous numerals add depth and a remarkable glow to the dial; the sweeping curves of the right hand side of the case protect both the crown and the mono-pusher; the beautifully decorated manual or automatic Sellita is branded with the Vertex logo and visible through a sapphire display back…

It’s a brilliant time to be a fan of British watchmaking. 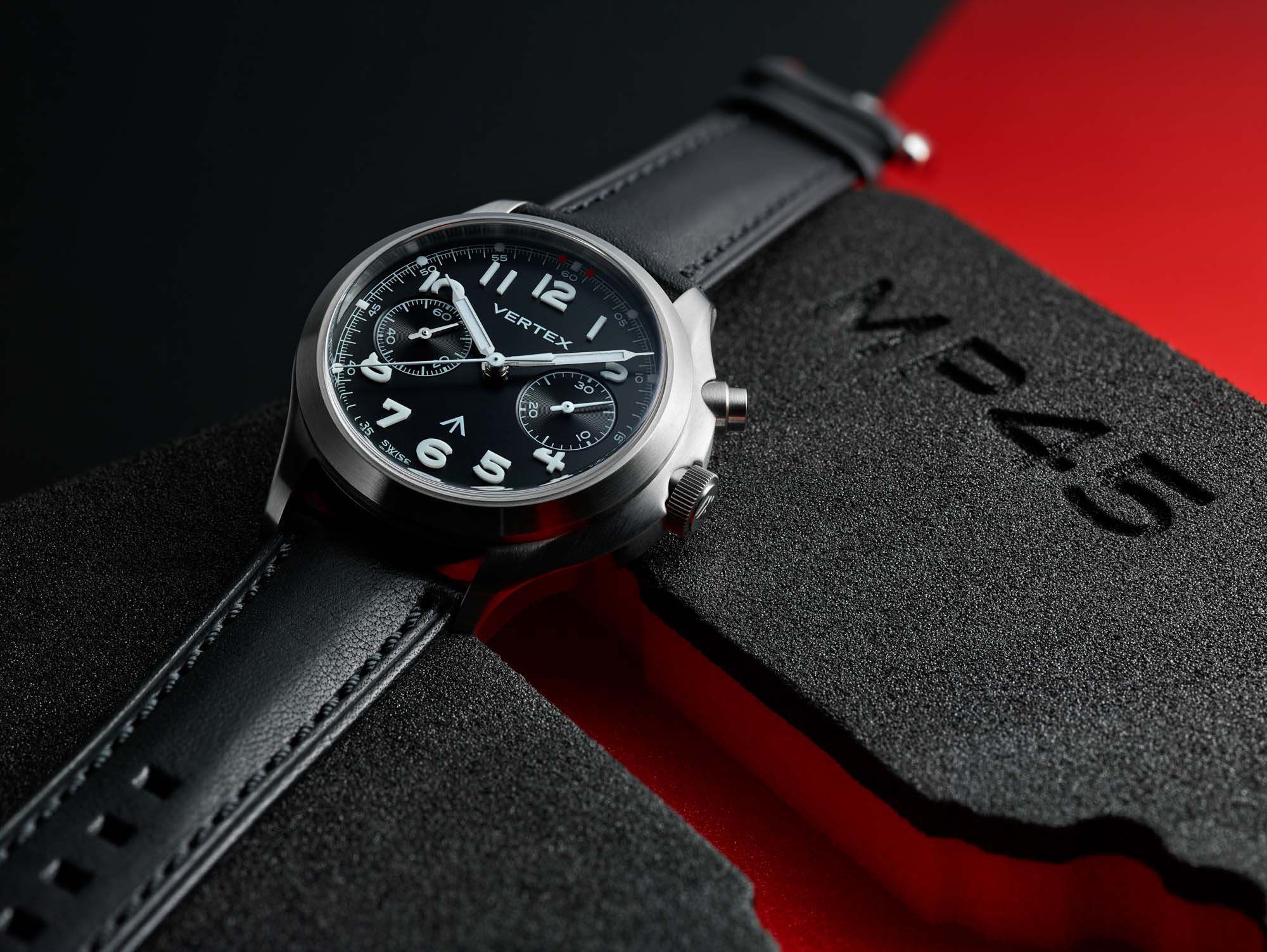 These are areas in which the MP45 differs from the Bremont HMAF Arrow. All of these decisions cost money in the manufacturing stage. Every one of them adds value to the MP45 over its competition, but even Vertex knows that isn’t necessarily enough. Because when you buy a British watch, you don’t just buy a product. You buy into an idea.

It’s a brilliant time to be a fan of British watchmaking. The more brands that pop up in and around this price point the better. From an independence perspective, Great Britain might be an island of opportunity. There are no group brands here. No other way to join the party unless you choose to go it alone. And really, there isn’t a nation better suited to bucking trends and doing things their own way.

The Swiss may well have the know-how that has been lost by the British over generations of inactivity. The Germans may well have an unmatched engineering pedigree and a firm grasp on how to create timeless products. But what the British have is imagination and balls-to-the-wind confidence enabling them to stare down opposition they have no right beating, and somehow still win (or at least walk away with their head held high after a good fight well fought). 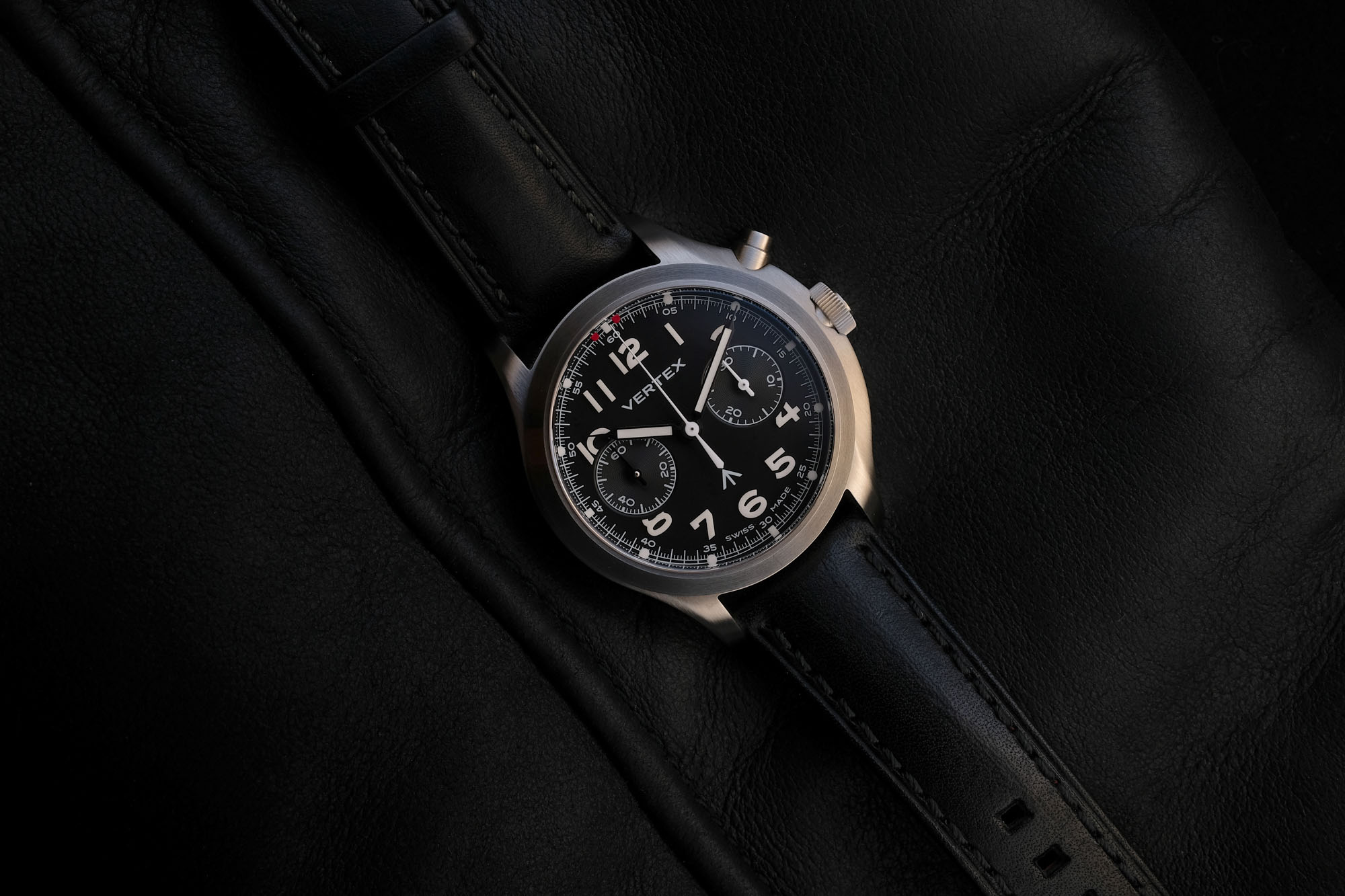 That is the joy that exudes from brands like Vertex. Small, plucky Davids standing up to European Goliaths. With a genuine and transparent heritage, Vertex has every chance of establishing themselves in the dog-eat-dog world of haute horlogerie while flying the British flag. And their products, as well as their endearing story, strengthen their cause.

With the inaugural M100 only available to those who have obtained a Vertex code from an existing owner (necessary to purchase the M100), the unrestricted MP45 – limited to 200 automatic and 200 manual pieces – is primed for a ‘dirty’ showdown.