Dedicated to the moon, fifty years since two men set foot on our natural satellite for the first time.
Gerard Nijenbrinks
comments 0
Share

Frequent readers know that, here at Fratello, we love things related to space travel. Probably ignited by the Omega Speedmaster Professional, a.k.a. the Moonwatch, however meanwhile extended to general astronautics. Of interest are space crafts like rockets, space shuttles, manned satellites, and more. 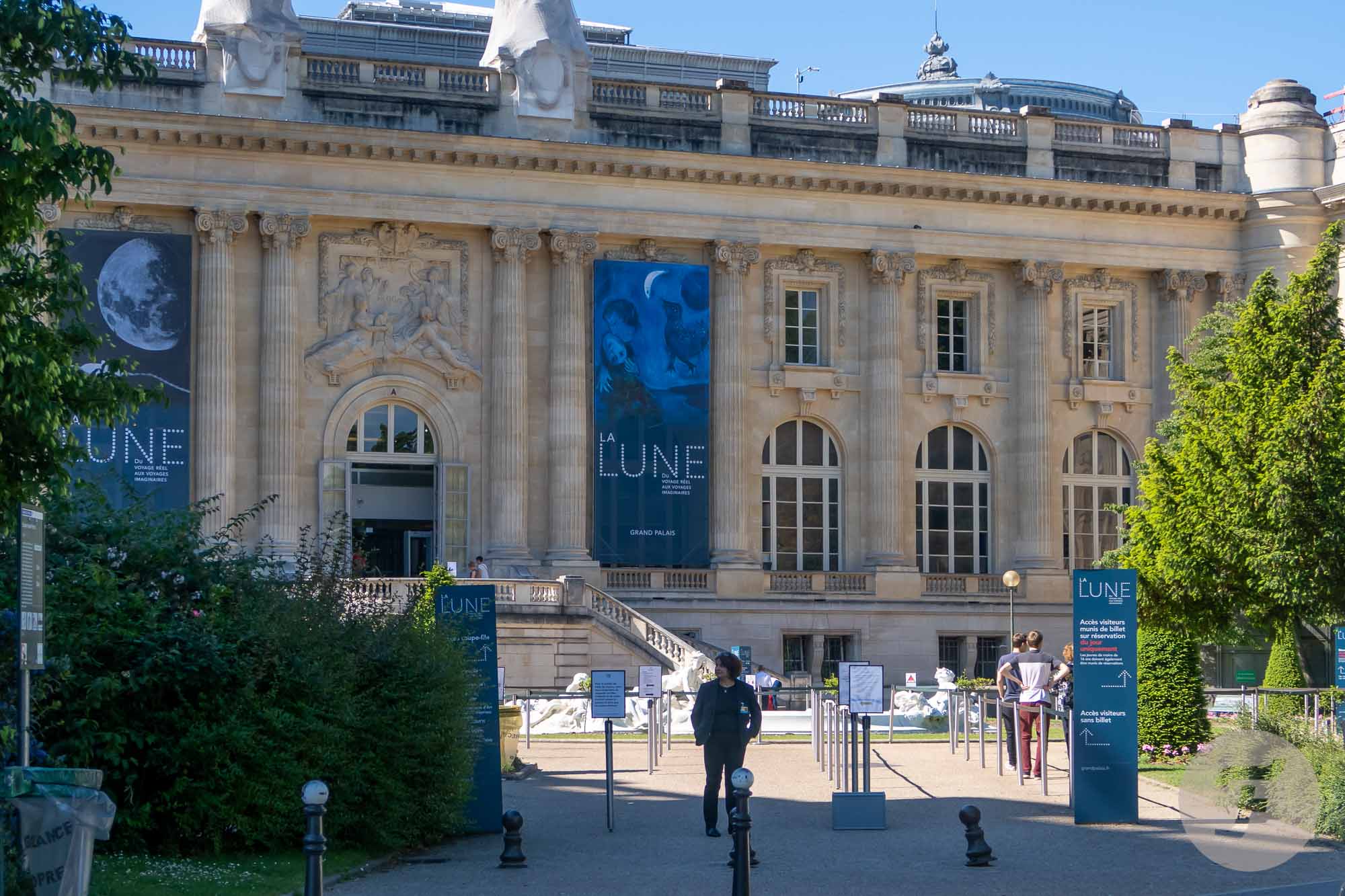 Our interest goes to flown objects, watches at best, but even pieces of protective foil will do. Then there are space-related items, like astronaut-used pens, cameras, and even space-related toys and comics. As examples, I want to mention LEGO models of the Saturn V rocket and lunar lander, as well as Tintin comics.

…a special place in our hearts

The Moon, however, always had a special place in our hearts. If then an entity like the Grand Palais in Paris takes the opportunity to celebrate the 50th anniversary of the first human step on the Moon by organizing an exhibition dedicated entirely to it, it won’t be a surprise that we had to go and visit. 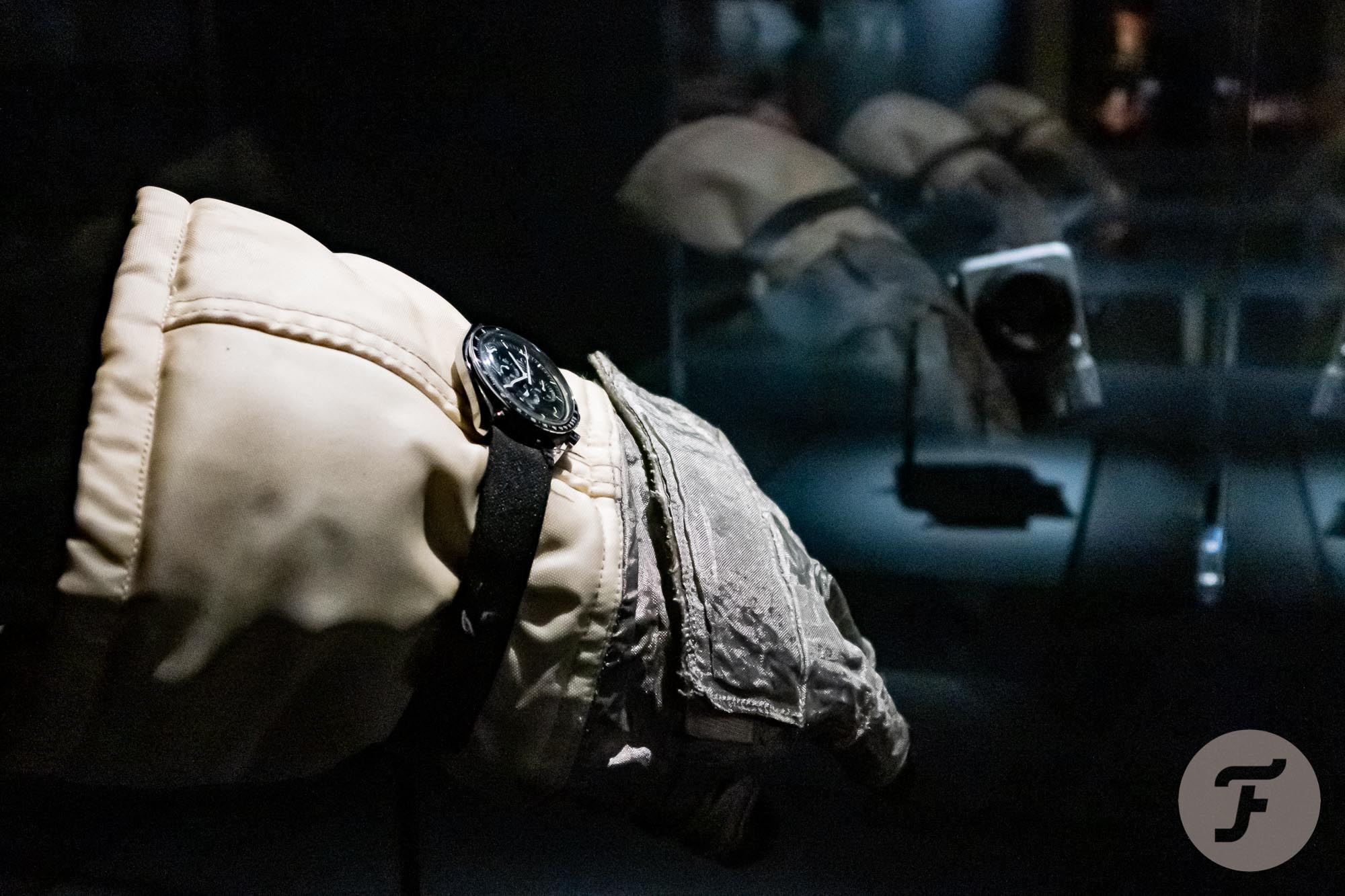 The journey to the Moon over the last 2000 years

Not only for us at Fratello, but the Moon, in many ways, has always influenced humanity. As gracious familiar celestial body lighting the night sky, the Moon visited the sleep of mortals and watched over lovers. Constantly changing, it gives rhythm to the passing time, and the lunar cycle became a symbol of inconsistency and moodiness. Traveling to the moon has been the subject of literary fiction for over two thousand years. First by Lucian of Samosata in the second century, who satirically described the Moon like an evil counterpart of the Earth. 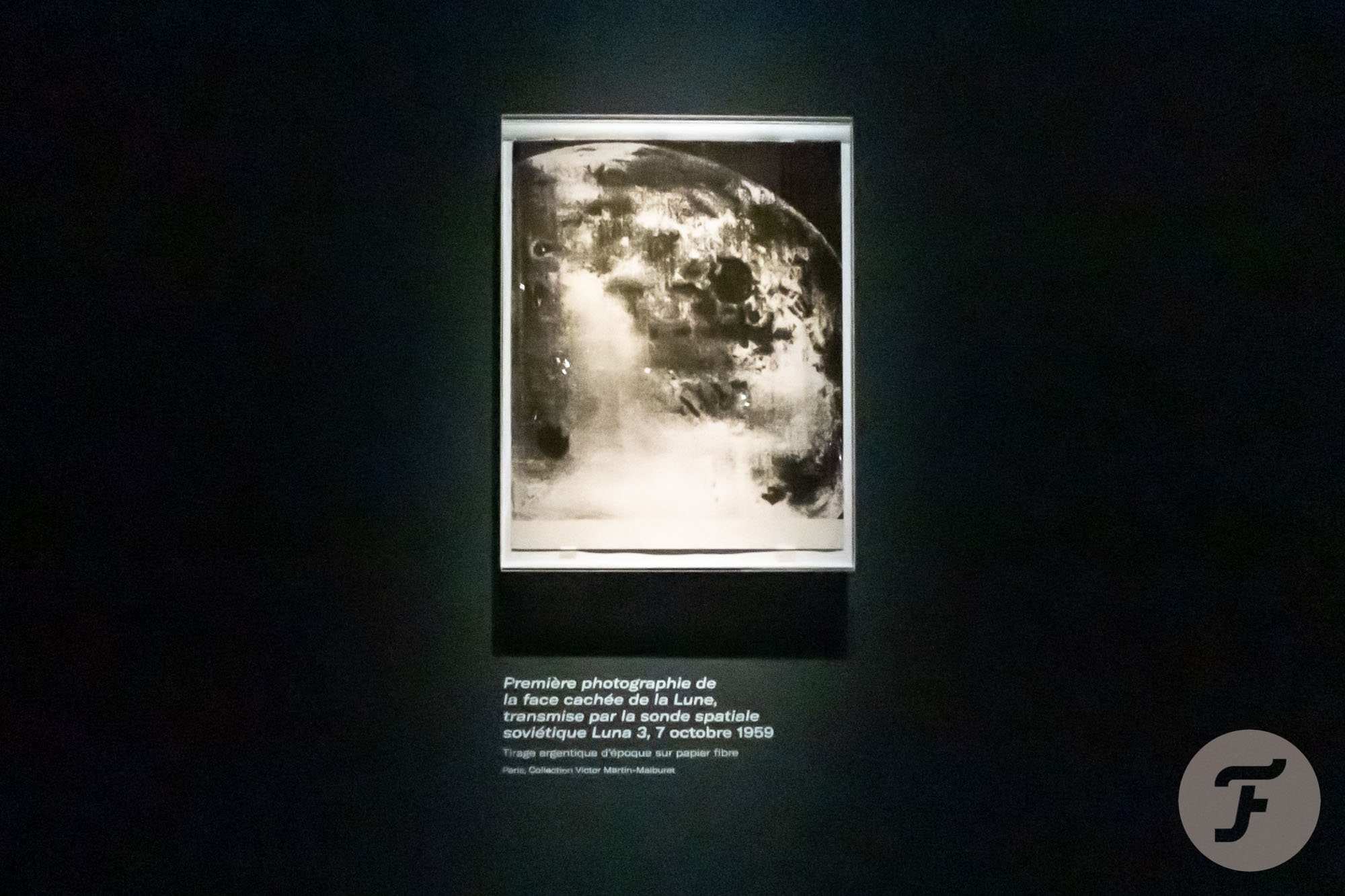 First picture of the dark side of the Moon

Then, in the early seventeenth century, the refracting telescope was invented. Its development and the subsequent invention of the optical telescope allowed the Moon’s surface to be observed and mapped in greater detail. Producing maps of a world no one yet intended to visit. This most probably led to pseudo-scientific stories – the forerunners of science fiction – in the 19th century, when cinemas and comics brought a virtual lunar exploration to the general public. In the end, in the twentieth century, traveling to the Moon became the source of international rivalry.

Serious research started in 1958 with the Mercury program, later followed by the Apollo program. A series of missions were carried out to obtain information and gain experience in space traveling. Then, on the night of 20 to 21 July 1969, the unthinkable happened. Two men stepped on the Moon. On the eleventh Apollo mission, three men were sent to the moon. Neil Armstrong, Buzz Aldrin, and Michael Collins (who remained in orbit). NASA’s decision to broadcast the lunar landing live to hundreds of millions of people made it one of the first truly global events. 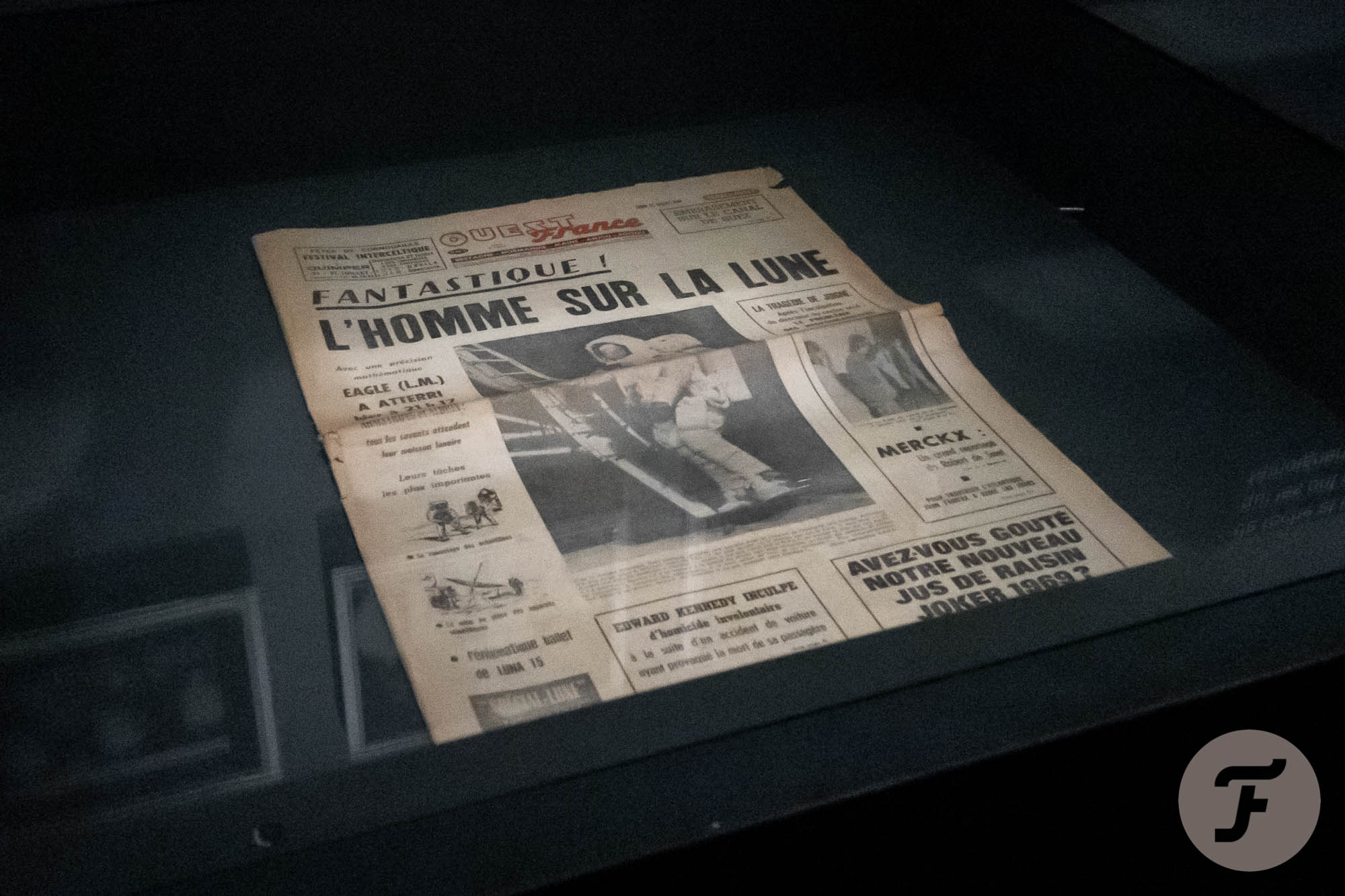 An exhibition of real and imaginary dimensions

The La Lune exhibition in the Grand Palais in Paris is made up of real and imaginary dimensions. Showing artistic creations, dedicated to the Moon, from Antiquity to the modern day. Not only produced in Europe, but also by African, Arab, and Far Eastern civilizations. However, showing real-world items and photographs related to the Moon and Moon landing as well.

Starting more or less at the end, one finds many space-related original pictures, items, and Astronauts objects when entering the exhibition. I learned that Omega, being one of the sponsors, provided Apollo 17 astronaut Ronal Evans’ Speedmaster and an original glove and Velcro strap to put on display. Further objects include a razor blade and Old Spice shaving cream, a Hasselblad 500 EL analogue camera, a glass helmet, etc., etc.

Several original pictures from the Moon and Moonlanding are on display

The imaginary part of the La Lune exhibition

Fratello isn’t an Art magazine, and we’re certainly no experts in this field. So I don’t want to go too deep into this; however, we don’t want to keep you from this part of the exhibition as well. I found it to be unpredictably beautiful. I’ll try to roughly divide the imaginary dimensions of the La Lune exhibition into three phases, contemporary, classical, and historical art, and put belonging pictures in galleries somewhat below.

…here’s information to visit the exhibition

If you happen to be in Paris or have the possibility to go there, I can certainly recommend you visit the La Lune exhibition. Entrance tickets can be bought for as little as € 14,=. Information and ordering can be done through the Grand Palais website here.

I’ll start with some pictures of Moon inspired modern Art. One of the first Art objects you’ll encounter when entering the exhibition is a concrete copy of the surface of the moon with the first step on it. You’re able to walk on it and put your shoe next to to the print. It feels almost like you’re on the Moon 😉 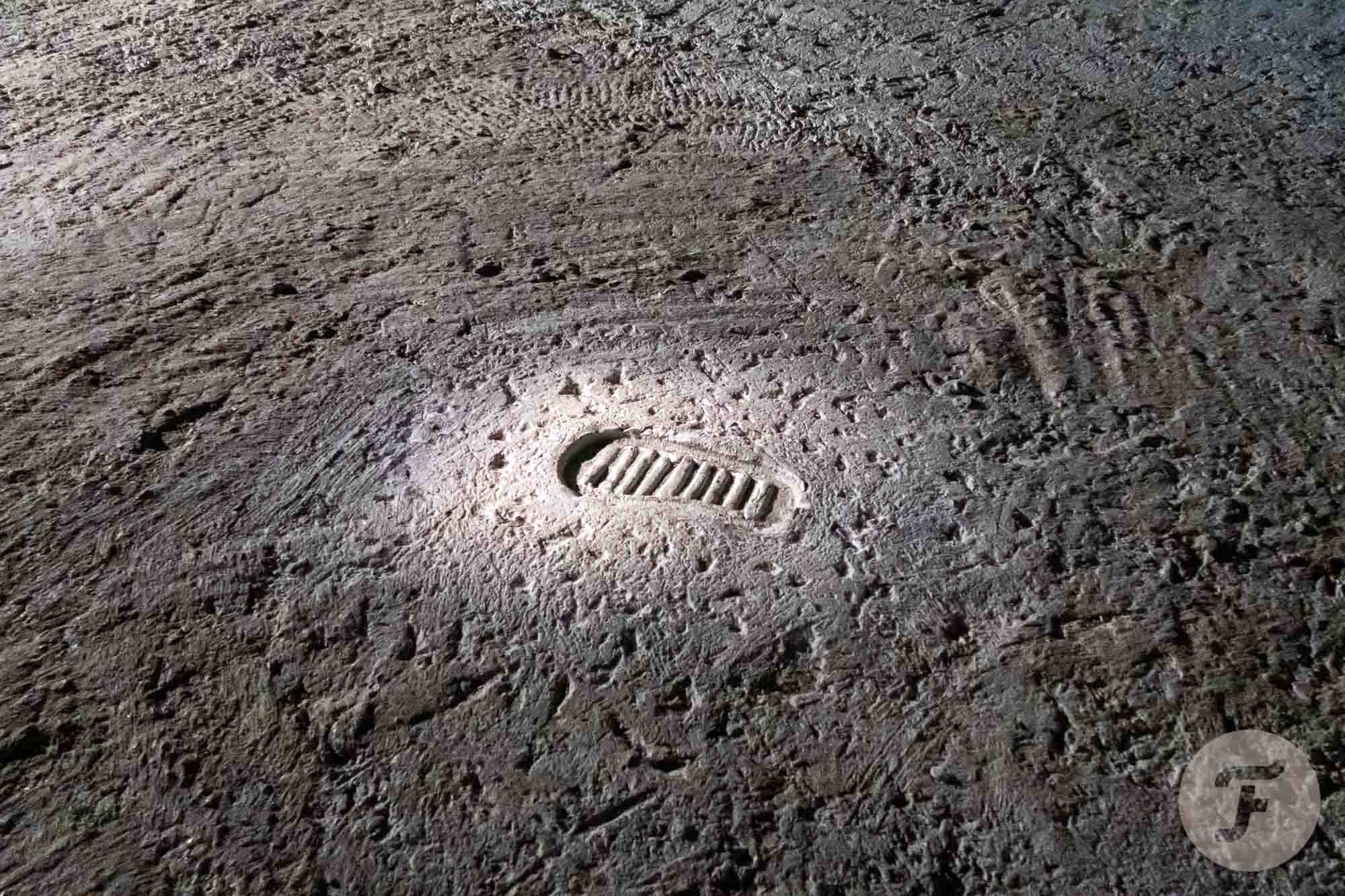 A concrete copy of the first step on the Moon 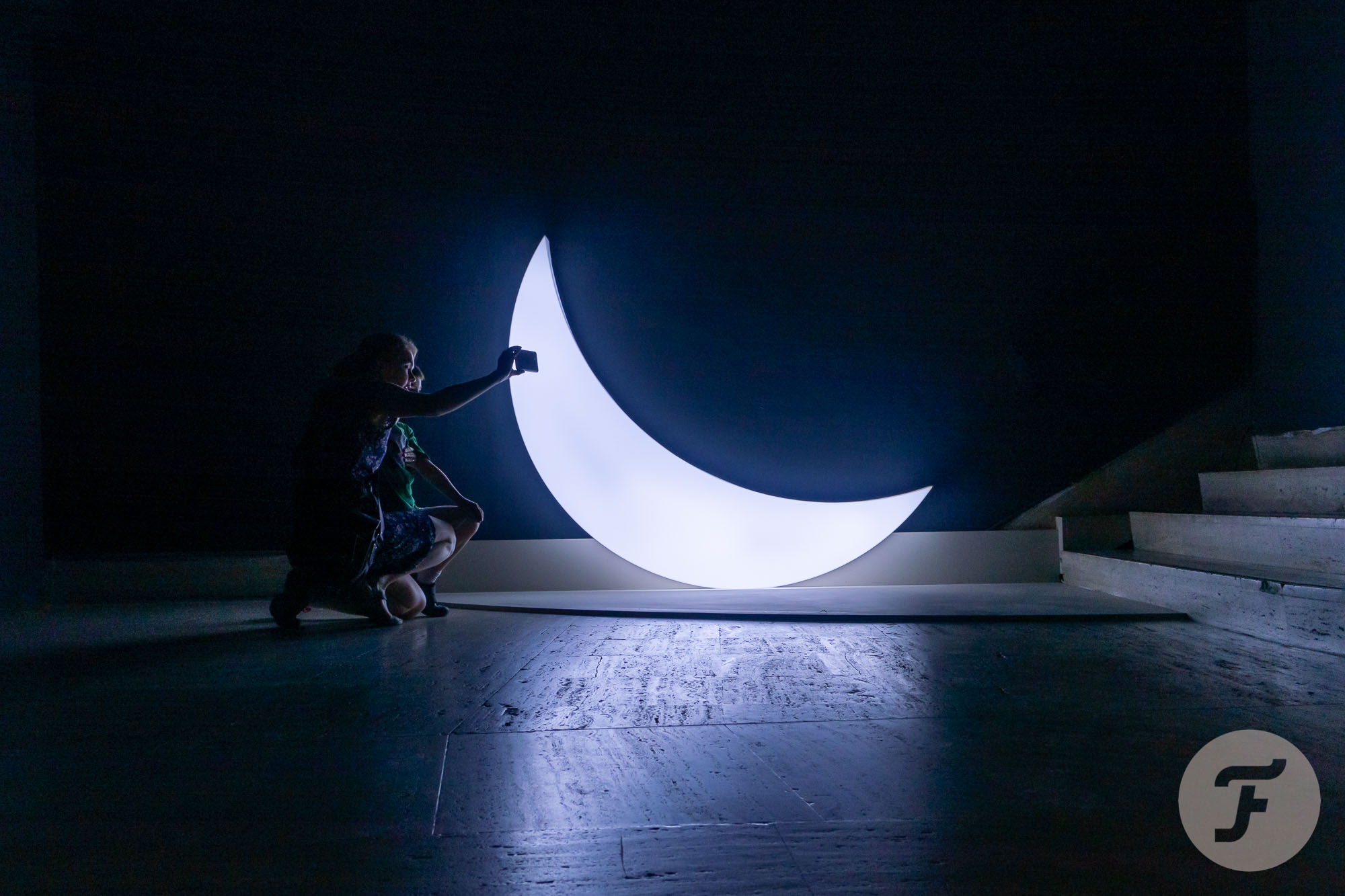 Here above an Art object can be seen which resembles the natural and mesmerizing Moonshine. As we know, Omega even named their new gold material, of which the 18k 50th anniversary Speedmaster is made of, after it. 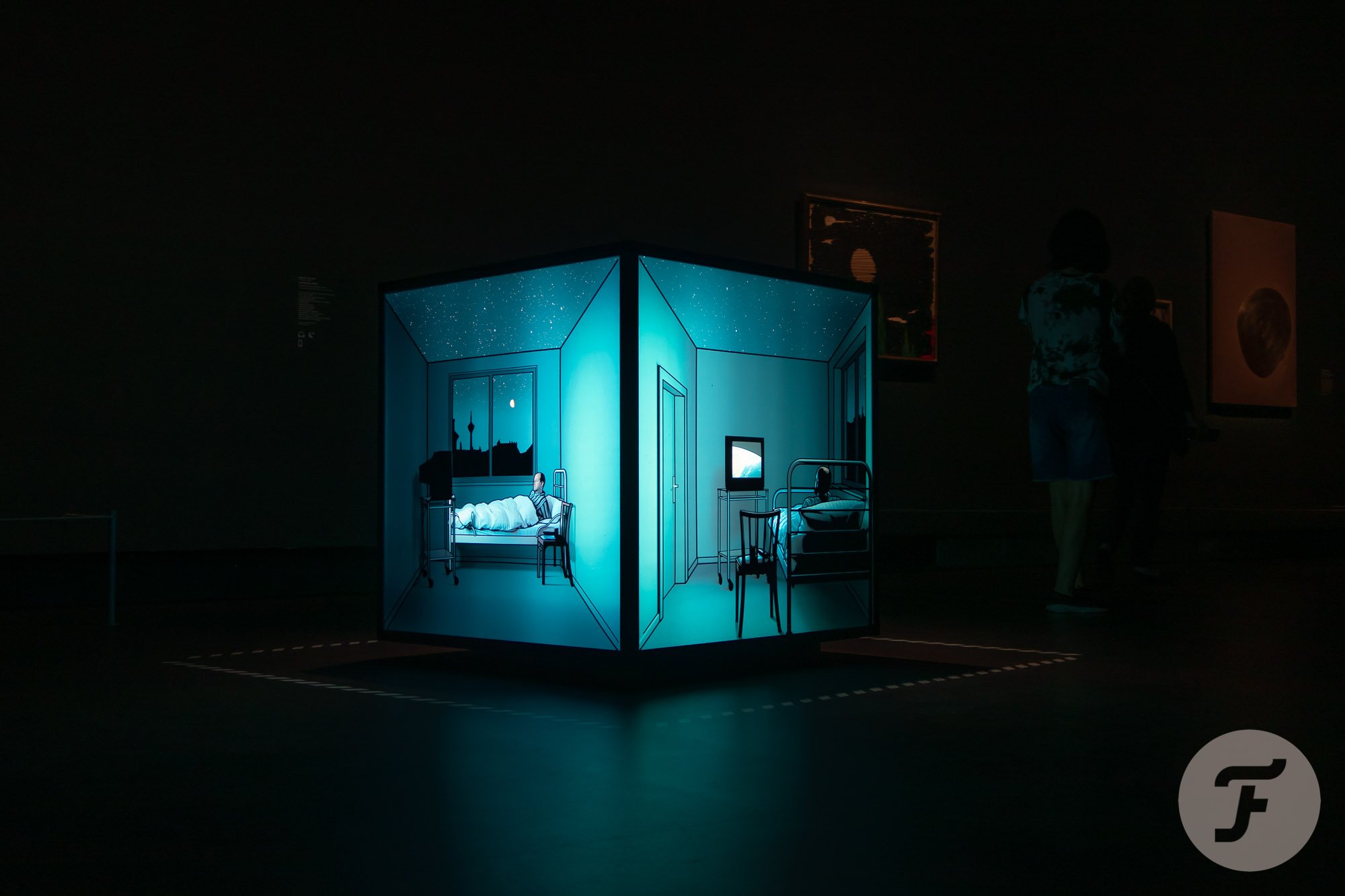 Walking further into the exhibition, Moon-inspired classical paintings can be found. Here, by way of many overwhelming paintings, it becomes evident how important the Moon has been in the past for mankind. Below you’ll find a few of my favorite paintings at the exhibition. 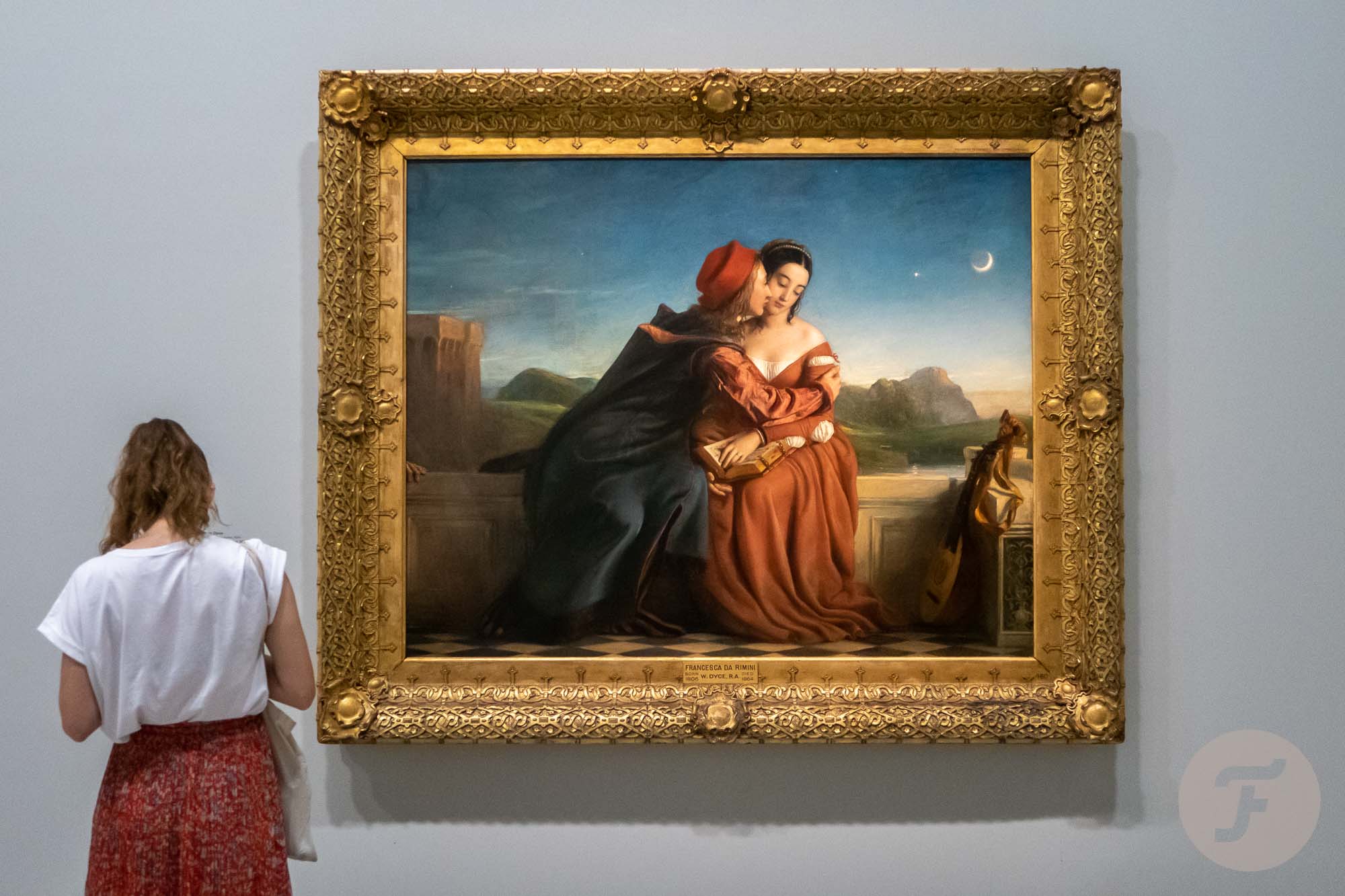 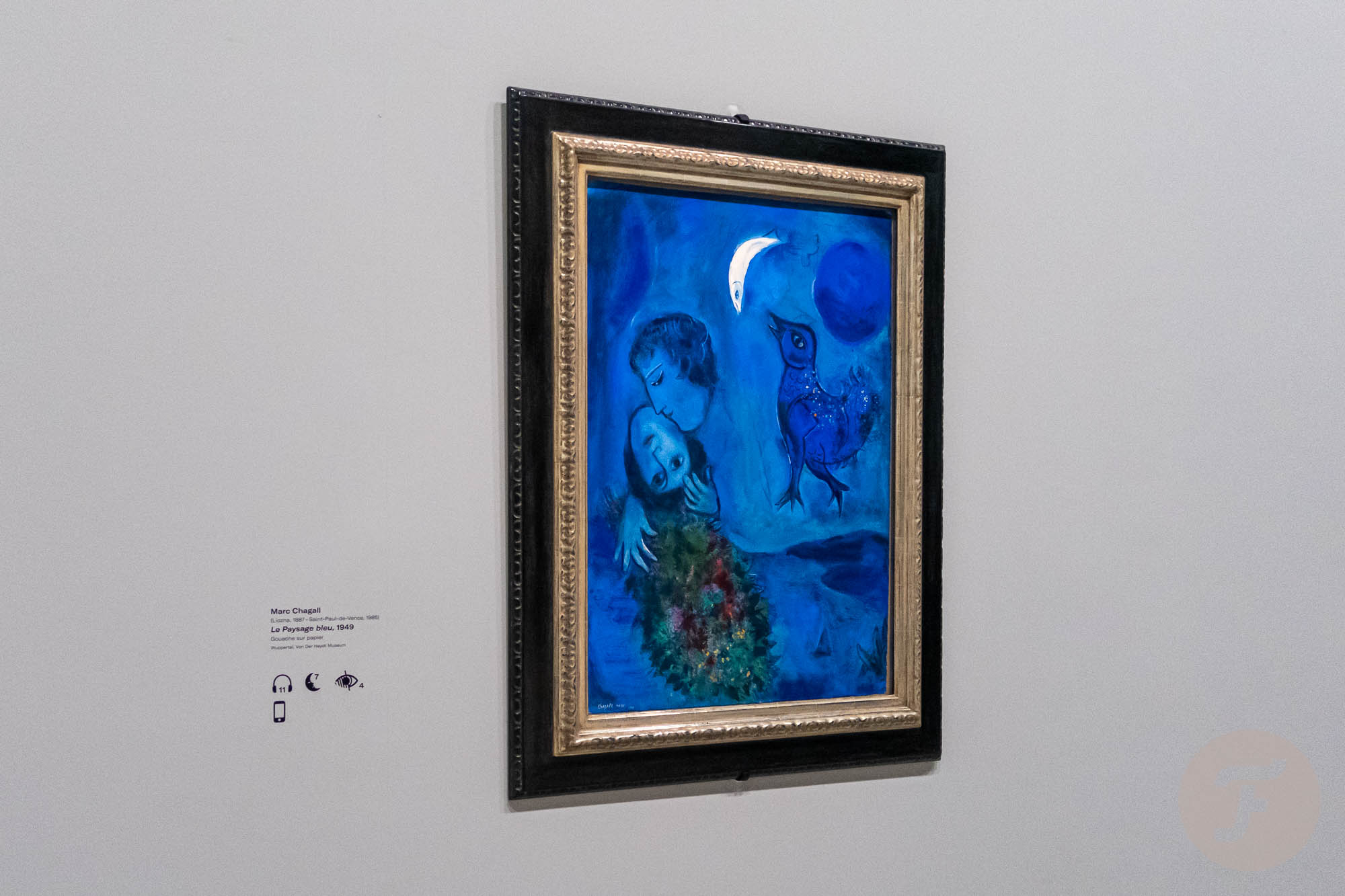 Above: Le Paysage Bleu by Marc Chagall, 1949. The painting which made it to the official banner of the exhibition.

At this point in the exhibition, an early astronomical clock is shown as well. Made in 1699 under the authority of Charles Perrault by no less than five craftsmen, and currently the property of the ‘Observatoire de Paris‘.

To finish this visit report, I’d like to show some ancient Artifacts demonstrated at the exhibition. They indicate the importance of the Moon even in antiquity and in several ancient civilizations.

Hot Topics
Introducing: The New Seamaster Professional 300M 60 Years Of Bond — With A Special Animated Case Back
104 comments
Are You Still After An Omega × Swatch MoonSwatch?
79 comments
It’s Time To Invest In A Dress Watch — Our Picks From Breguet, Omega, Grand Seiko, And More
71 comments
Sunday Morning Showdown: The Tudor Pelagos Provocation — Pelagos Vs. Pelagos 39
55 comments
The Rolex Waitlist Conundrum — How Much Will The Price Of Your Watch Increase While You Wait?
48 comments
Popular
Rolex GMT-Master History And Overview Of All Major References
Robert-Jan Broer
18
Certina DS PH200M – Hands-On Review
Balazs Ferenczi
23
Two Patek Philippe Nautilus Watches: 3700/1A Versus 5711/1A
Robert-Jan Broer
16