Last week Bert Buijsrogge and I visited the assembly line of the much talked-about Omega Caliber 9300 movement. This in-house developed movement was introduced during BaselWorld 2011 in the Omega Seamaster Planet Ocean Chronograph as well as in the Omega Speedmaster Co-Axial Caliber 9300.

Ever since 2007, Omega is focusing on their in-house developed Co-Axial movements and started by equipping the De Ville and Seamaster models with their caliber 8500. Starting in 1999 already, Omega started using the Co-Axial escapement in movement as such, but (mainly) based on existing ETA movements. 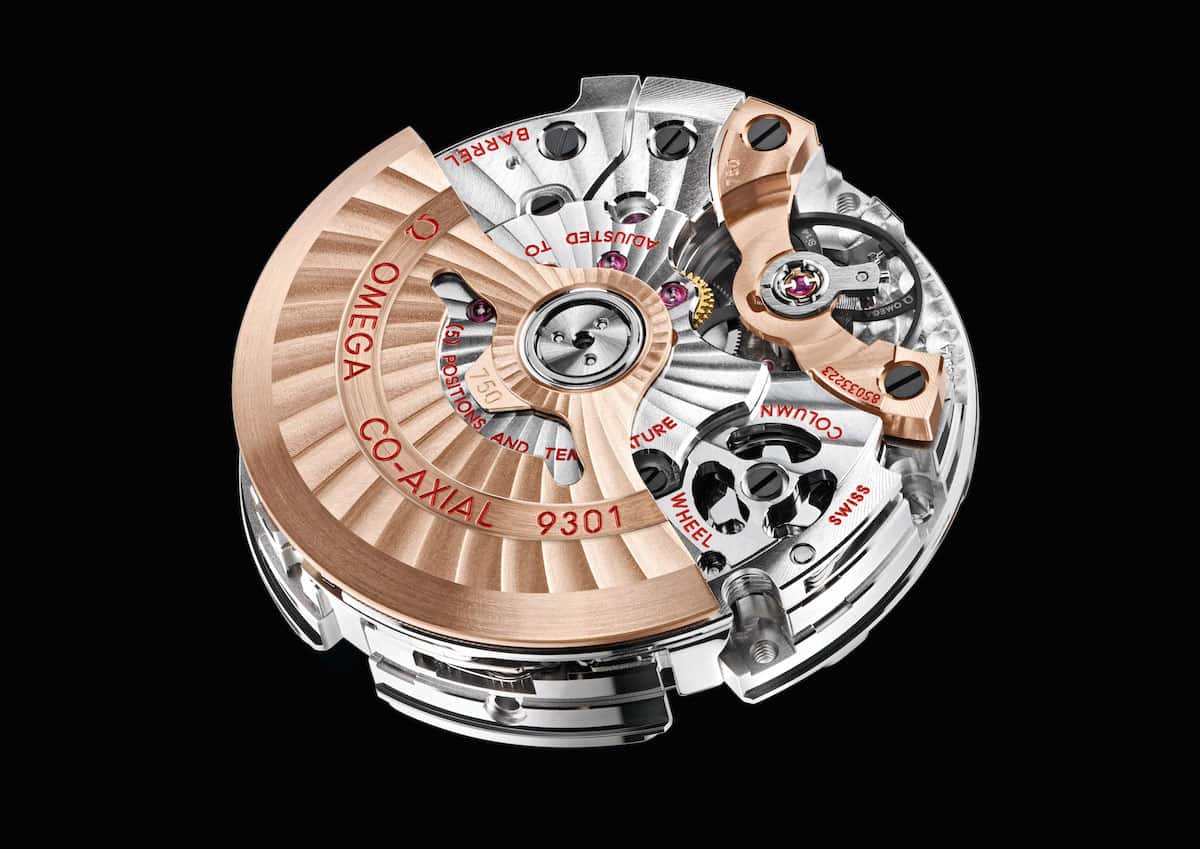 During our visit to the assembly line of the Omega caliber 9300 movement (we did not see 9301 movements, this is probably because they are assembled on specific order so they are processed batch by batch of the same type of movement), we asked whether the Co-Axial escapement (now 15 years old) has been a true improvement compared to the regular escapements used in – for example – ETA movements. Although we are unable to verify their answer, we have no reason or indication to doubt the answer of the responsible guy who showed us around: less friction is less wear and tear and this results in longer intervals between services. Since we get our share of emails from Speedmaster fans around the world, we didn’t hear about technical issues with the Omega caliber 9300 movements so far (unlike some years ago – early 2000s – with the caliber 330x movements Omega used where issues were raised very quickly).

With any watch escapement, energy must be transmitted to the oscillator; this energy maintains the oscillator’s frequency. The impulses in a Swiss lever escapement involve the wheel tooth sliding along the inclined surface of the pallet. This sliding movement generates considerable friction, making optimal lubrication vital if the escapement is to function correctly. In contrast, the OMEGA Co-Axial escapement transmits energy using lateral impulses. The smaller contact surfaces and the pushing motion, as opposed to the lever escapement’s sliding motion, significantly reduce the friction in the escapement; thus there is less wear and tear on the lubrication, resulting in longer service intervals.

Our visit lead us to Grenchen, where the production facility of the Omega caliber 9300 is located. After a short introduction with our guide, who immediately asks us about what we already know about the caliber 9300 movement :), we put on our white coats and hair caps in order to protect the assembly process of the movements we are about to see. 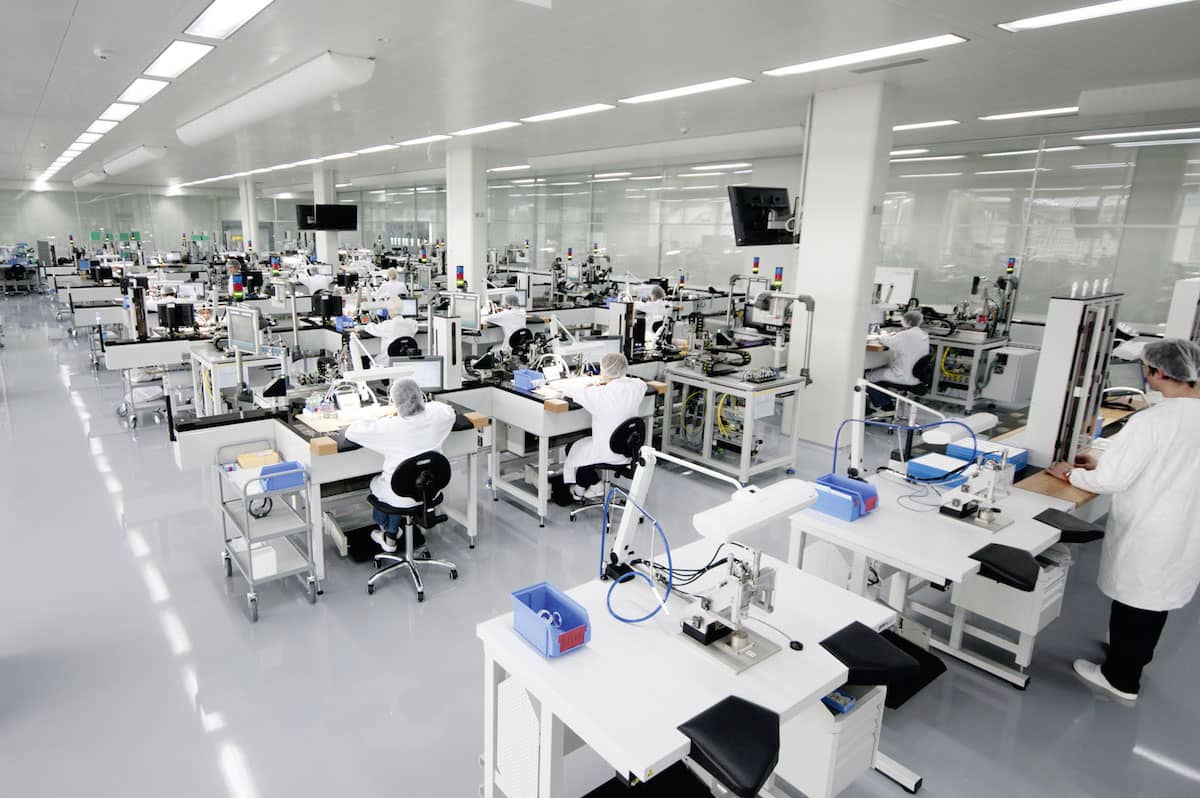 We were guided from the start to the end of the assembly line. All the movement parts were already finished and manufactured when they come in. This Omega caliber 9300 has an automated system that will guide each movement from start to finish along a few stops where employees assemble parts, perform measurements (although a lot of measurements are done automatically using very advanced laser technologies), perform adjustments and finally assemble the entire movement. The use of their advanced  equipment for testing and measuring enables them to work with the highest tolerances possible.

We were amazed to see how well-organized and efficient the entire assembly process has been set-up. Also, all the specific equipment used to monitor, measure and calibrate has been in-house designed and developed as well. All employees are flexible and can perform activities on multiple manual-workstations, as they were called. 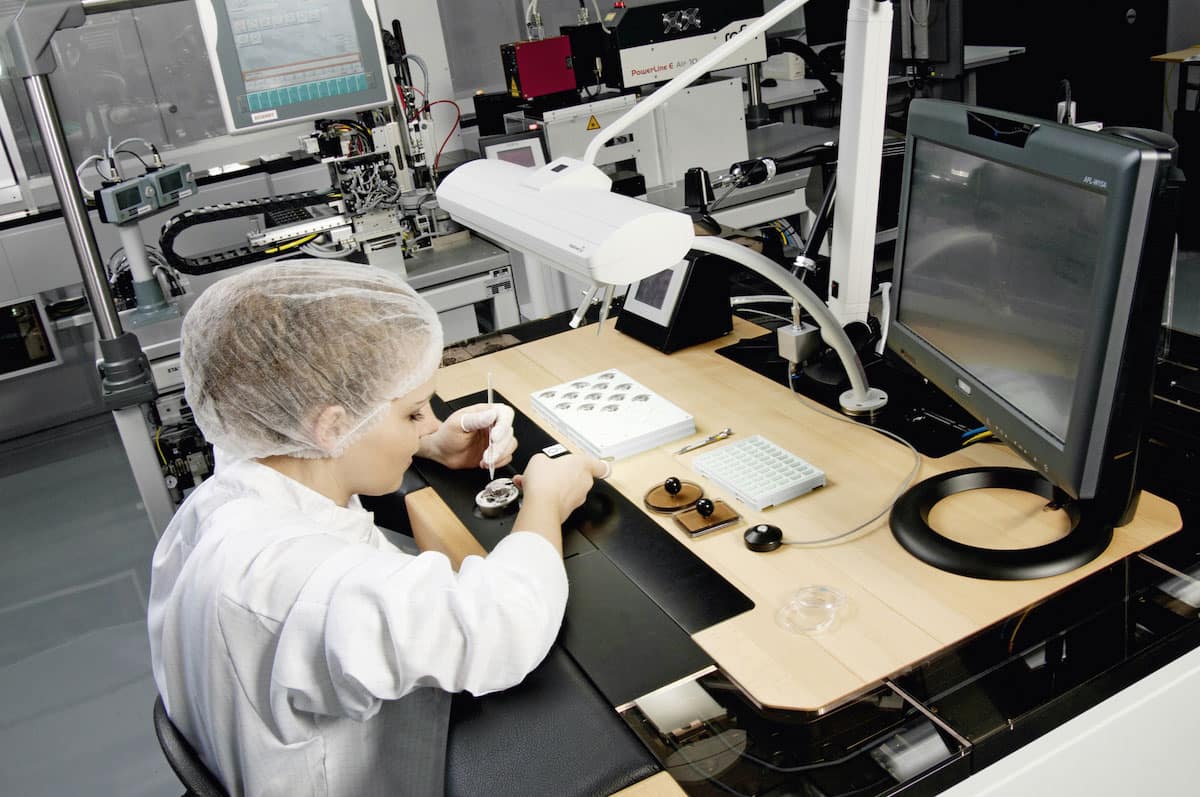 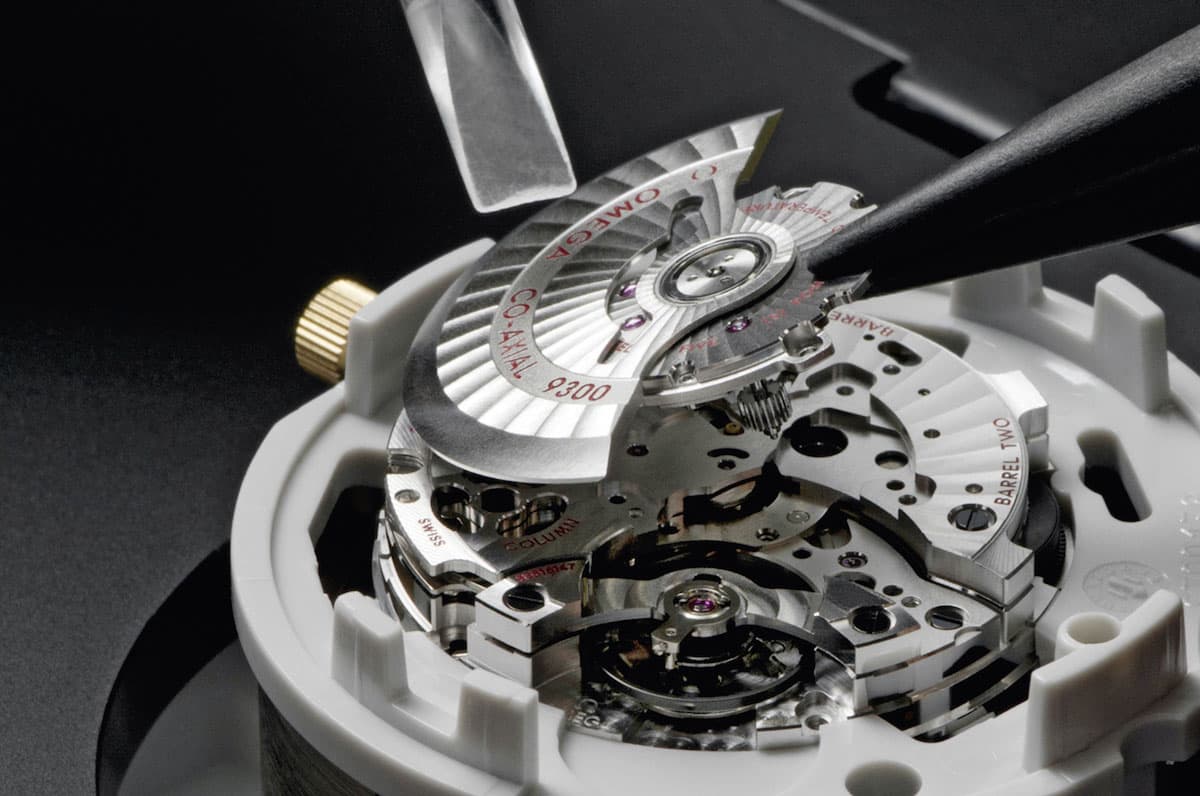 After an Omega Caliber 9300 movement went through all stages and steps, it is being boxed and offered for its chronometer testing at COSC. COSC requires the movement to have a specific dial that is usable for them to perform the visual checks in order to do the chronometer rating. After Omega receives their movements again, that dial and hands are being removed of course. In that very last stage Omega adds the rotor to the watch. Apparently a rotor is not needed for COSC to perform their tests, the movement will be just manually wound. 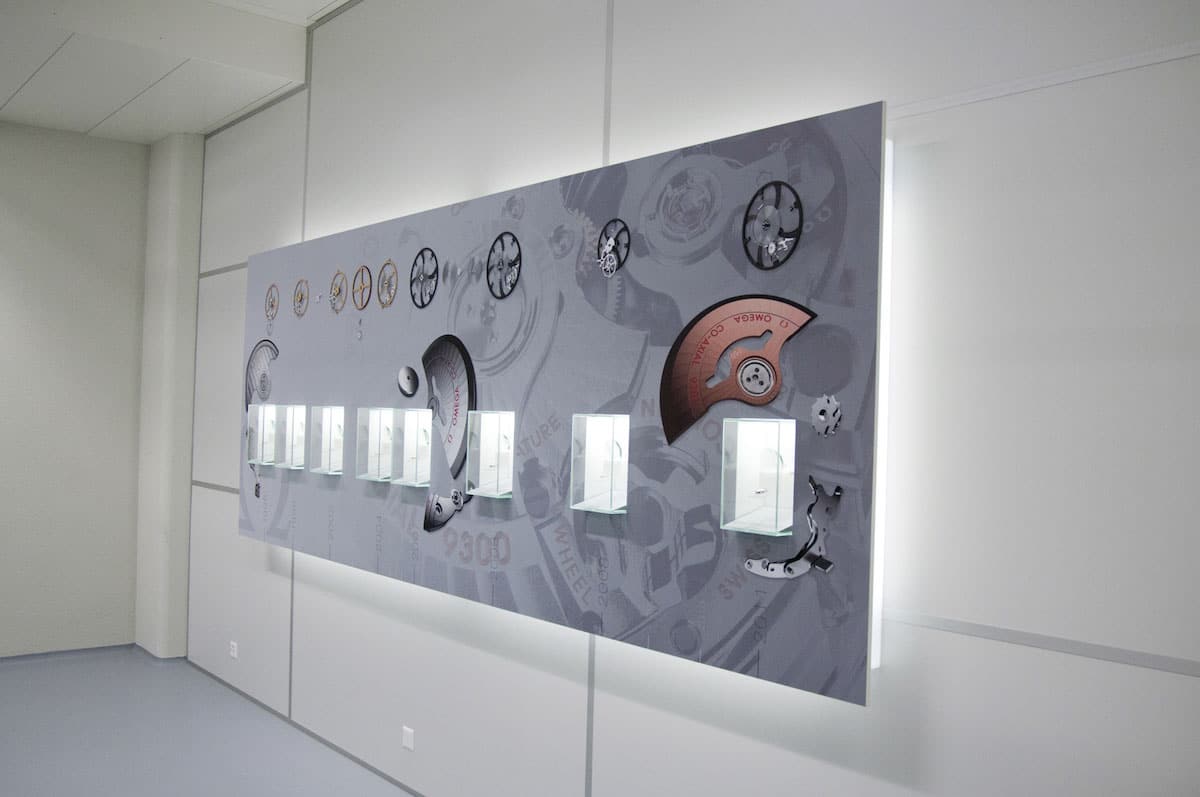 In the end Bert and I were asked to partly assemble an Omega caliber 9300 movement, that is: adding the two barrels and the bridge that covers them (and making sure they’d work). Although we managed, it was a little task that required quite a bit of concentration as the parts are so small and sometimes difficult to grasp with a tool. Photos of this activity can be seen on our Instagram account (@fratellowatches).

We would like to thank Omega in Bienne for having us and permitting us access to the caliber 9300 assembly line in Grenchen. We were quite amazed by the high-tech processes and level of automation. It was like walking around in a laboratory. The research Omega put into developing this movement and the equipment to have it assembled, testes and measured is of an unbelievable high level.

More information on Omega’s Co-Axial movements can be found here.

Hot Topics
Laventure Automobile Chronograph With A Proprietary Movement — Marking A Huge Leap Forward For One Of The Industry’s Most Promising Brands
157 comments
We Talk To Swatch Group CEO Nick Hayek About The MoonSwatch
116 comments
Fratello Exclusive: An Inside Look At The MoonSwatch Production Facilities
76 comments
Summer Splash — Semi-Final 1: Thor’s Doxa SUB 300 Divingstar Vs. Jorg’s Tudor Pelagos FXD
61 comments
How To Prevent Buyer’s Remorse When Shopping For A New Watch
44 comments
Popular
10 Tips For Better Watch Photography
Bert Buijsrogge
11
Hands-On With the Seiko Prospex SRPC91K1 – Save The Ocean
Robert-Jan Broer
15
Why Are There No Stainless Steel Rolex Watches Available?
Robert-Jan Broer
119