There weren’t a lot of classes that I liked during high school, but I did enjoy the history lessons. I hope you felt and still feel the same because you need to know history to fully appreciate the Waltham brand. The Waltham Watch Company, also known as American Waltham Watch Co. and American Watch Co.,was an American company from Waltham, Massachusetts — why think of a fancy brand name, right? The company was founded in 1849, and by the time Waltham went out of business in 1957, it had produced about 40 million watches in addition to clocks, speedometers, compasses, time-delay fuses, and other precision instruments. Watch Angels, a company from the Swiss town of Mendrisio, has brought the brand back. The Waltham Field & Marine Dual Time Grey is one of the reborn creations, and I got the chance to wear it for a while.

The brand Waltham vanished from the market in the late 1950s, but what is interesting to know — and what also shows the huge importance of Waltham as a watch manufacturer — is that the company’s historic 19th-century manufacturing facilities have been preserved. When you travel to Waltham, Massachusetts, you can go to the American Waltham Watch Company Historic District. This place on the south bank of the Charles River is home to the former factory of the largest employer in the city. The buildings of the district have been repurposed for a variety of industrial, commercial, and residential uses, and have been listed on the National Register of Historic Places since 1989. 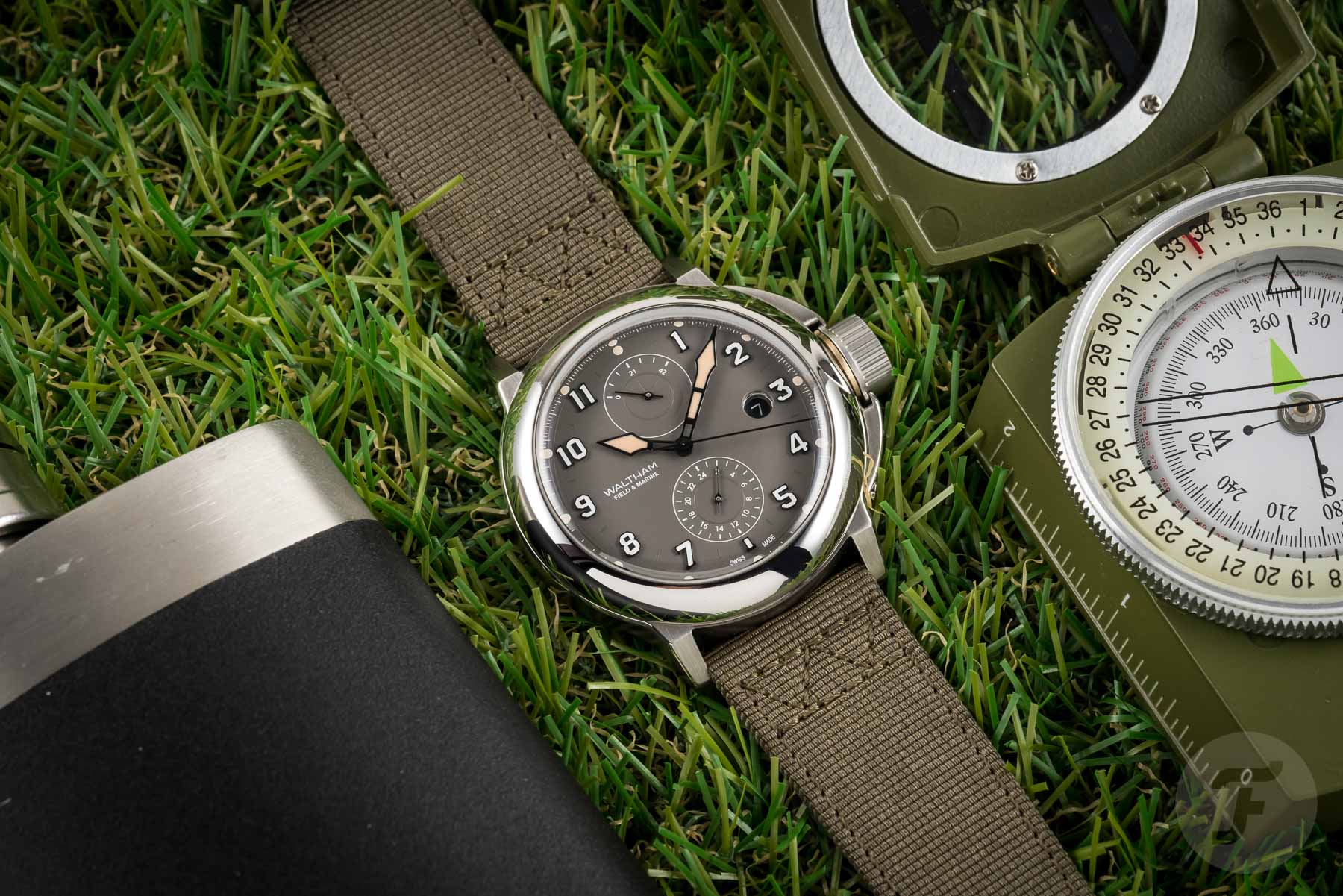 You now know about the former production site, but what about Waltham watches? Well, Waltham’s creations were on the wrists of pioneering legends like Sir Ernest Shackleton when he went on his trek towards the South Pole. Robert Peary also used Waltham watches when he went in the opposite direction and conquered the North Pole. Another good thing to know — Longines fans and employees, you may want to skip this sentence — is that Charles Lindbergh took a Waltham with him on the first non-stop transatlantic flight. 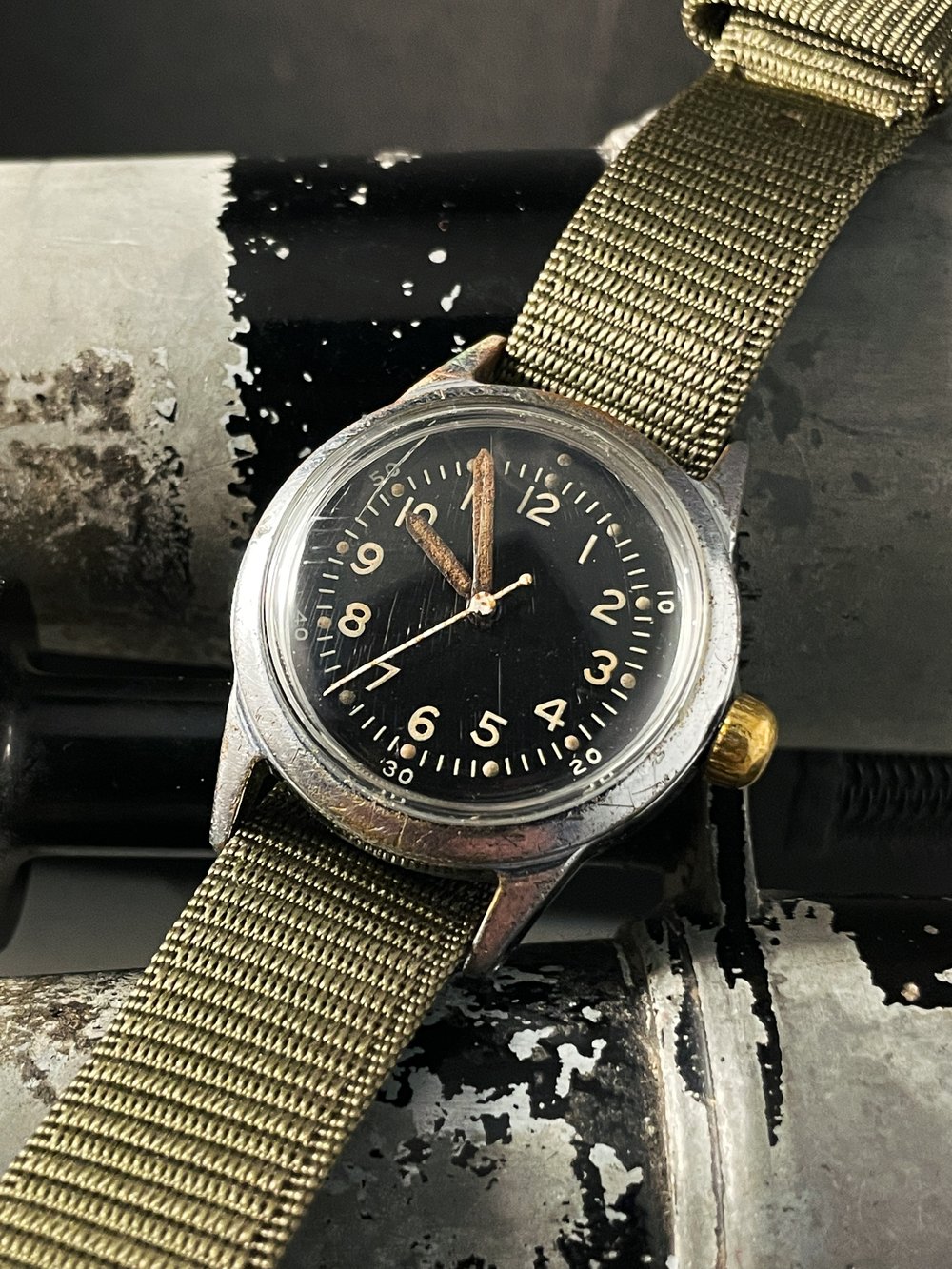 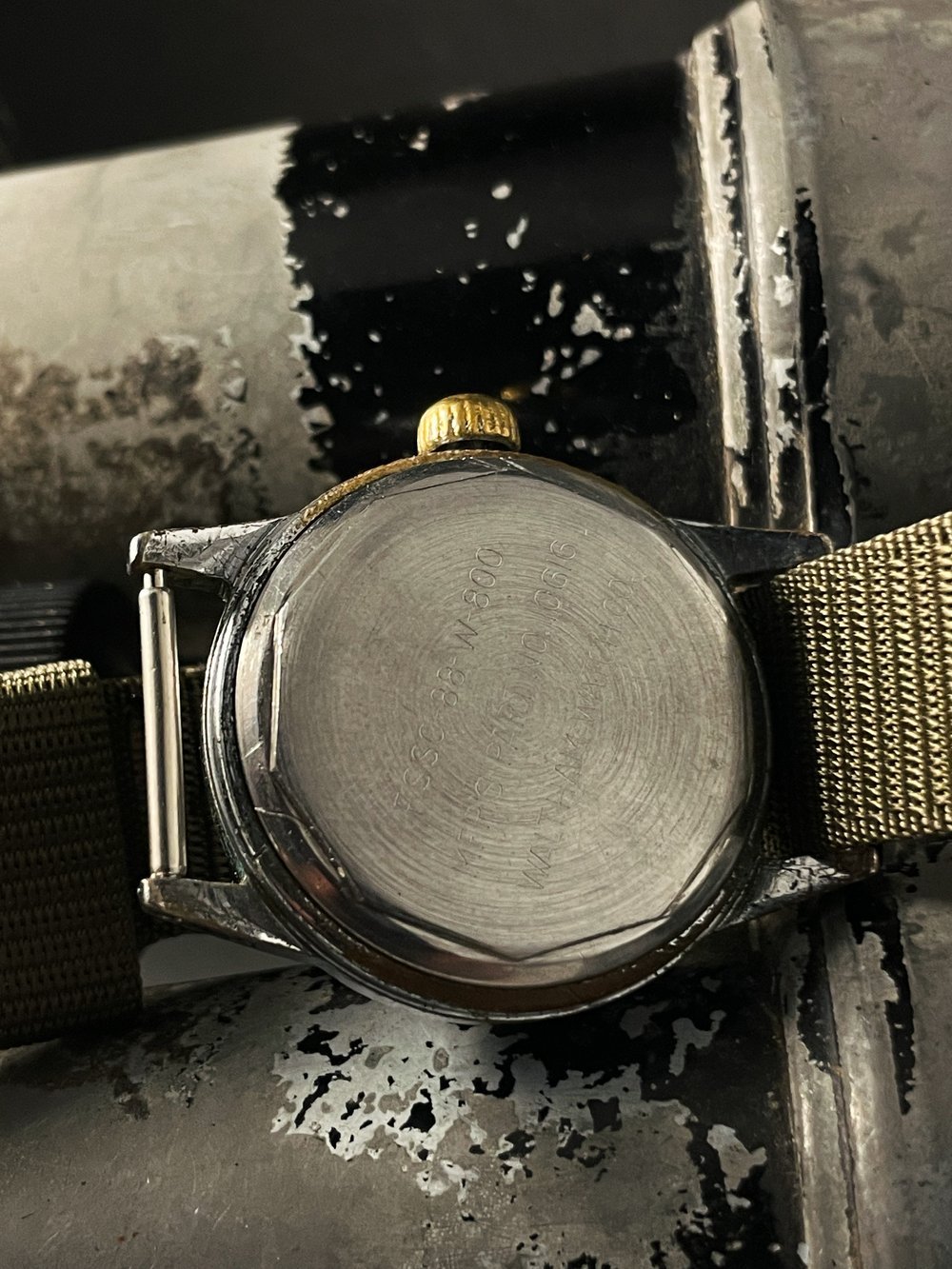 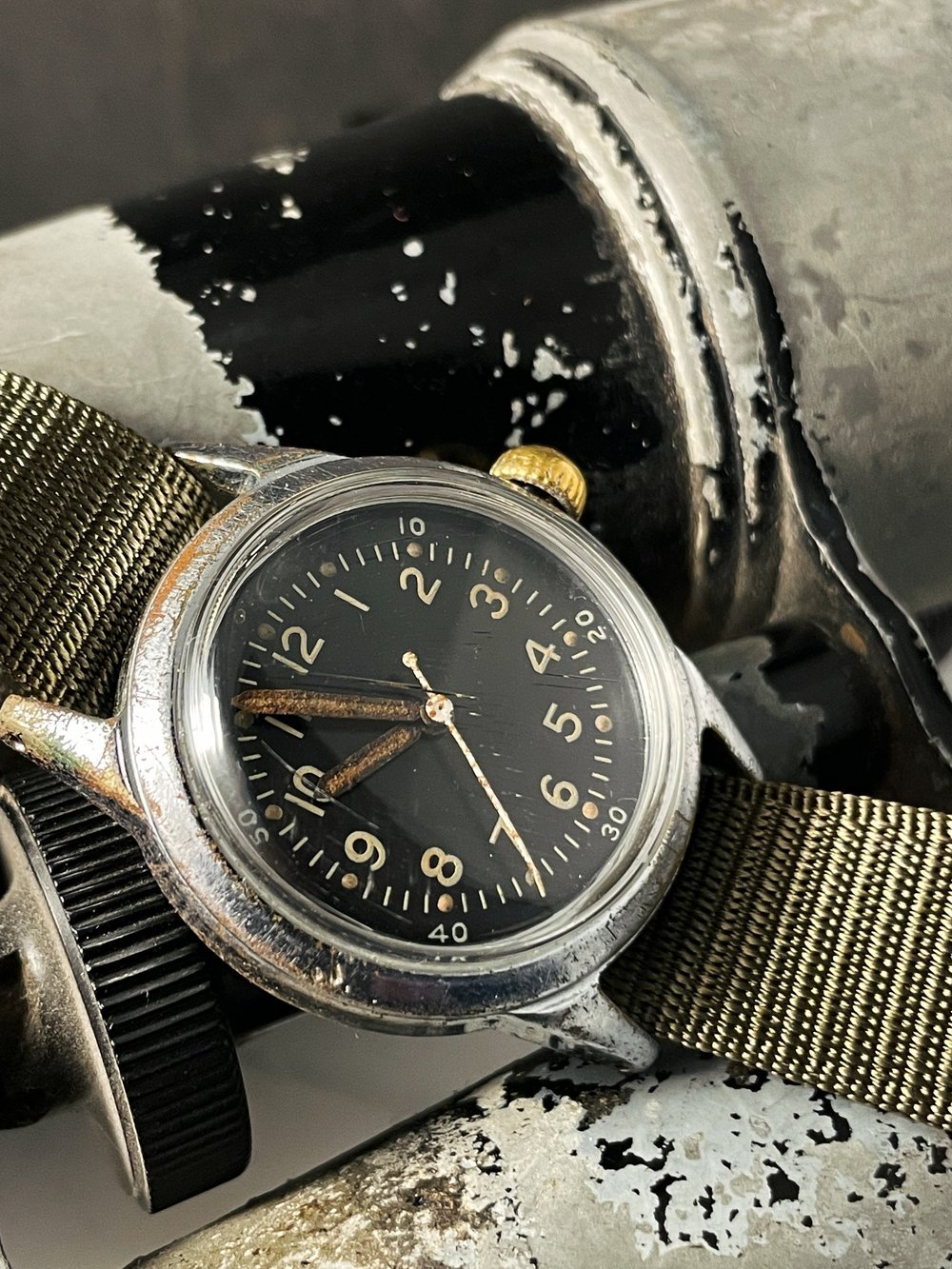 But what about the field watches that Waltham produced for the military? There was, for example, the 31.5mm reference ML15 military watch that the company produced in the 1940s. This watch is tiny in comparison to the 2022 Waltham Field & Marine Dual Time Grey. The new watch measures 43mm in diameter., but the shape of the historic model still shines through in the modern reinterpretation. 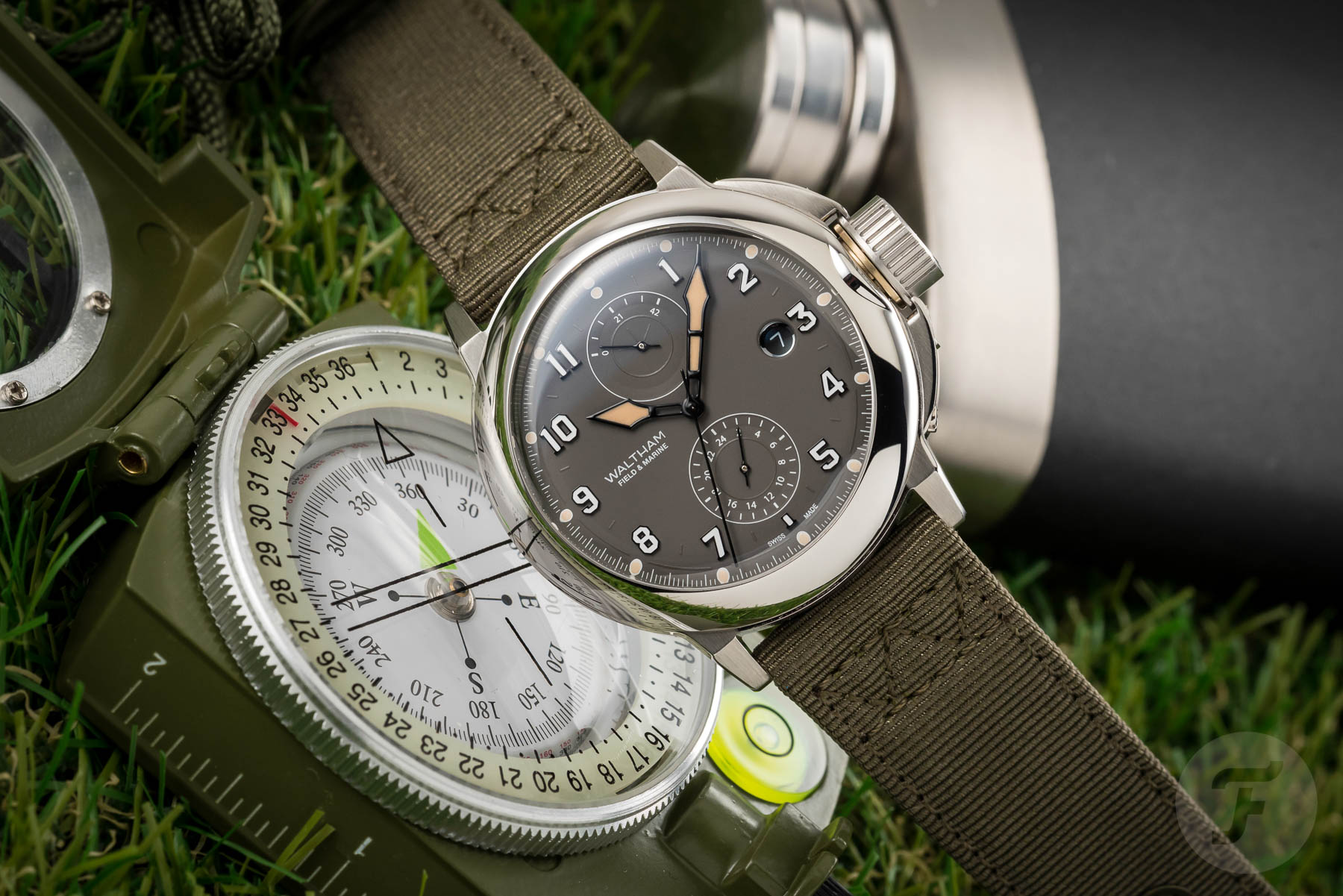 You might know that the Dutch are the world’s tallest people, with an average height of 175.62 centimeters. The country with the biggest/heaviest people in the OECD — The Economist describes the Organisation for Economic Co-operation and Development (OECD) as “the club of mostly rich countries” — is the United States of America. Maybe that’s why I don’t mind the fact that the Waltham Field & Marine Dual Time is an oversized watch. Yes, I thought I was looking at a pilot’s watch at first, but the longer I wore it, the more it grew on me. And despite its large 43 × 13.18mm case and 47.9mm lug-to-lug length, it did feel more or less like a field watch. That’s because of the comfortable, flat case back, the rounded, polished, smooth bezel, and the understated dial color. Yes, this Waltham is a big American, but it doesn’t give you that impression. 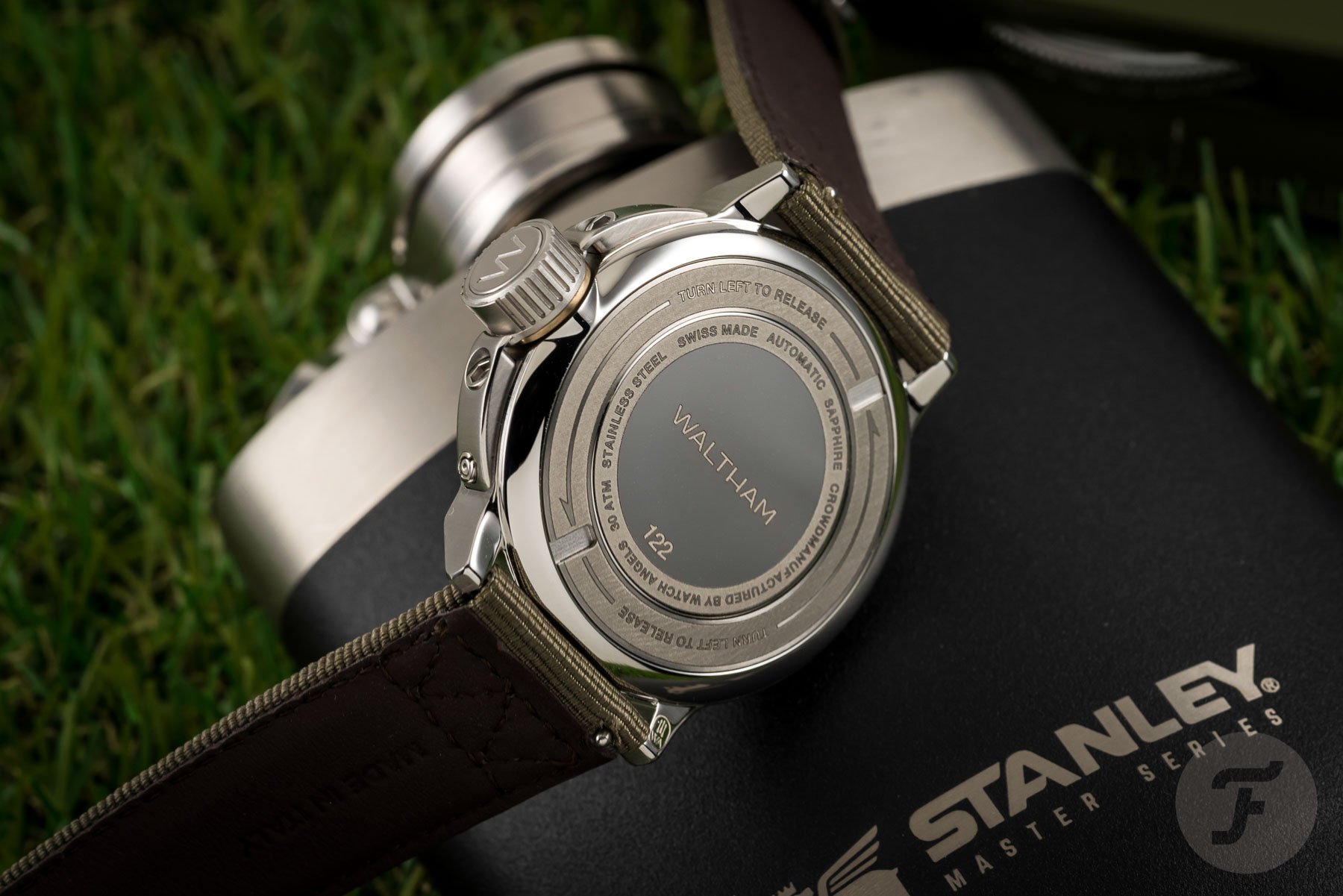 The large and unusual bayonet crown

What is big, though, in every sense is the crown. All Waltham Field & Marine watches have an unusual and interesting bayonet crown that is based on a timepiece and patent from around 1919. Some claim — and by “some”, I mean the old people from Waltham and the new people from Watch Angels — that this crown system, together with the decompression case, led to the creation of the first truly water-resistant watches. The patent of the crown is the predecessor of the screw-down crown. It’s a system that is similar to how a soldier would fix a bayonet knife to a rifle, pushing it on and twisting it to lock it into place. 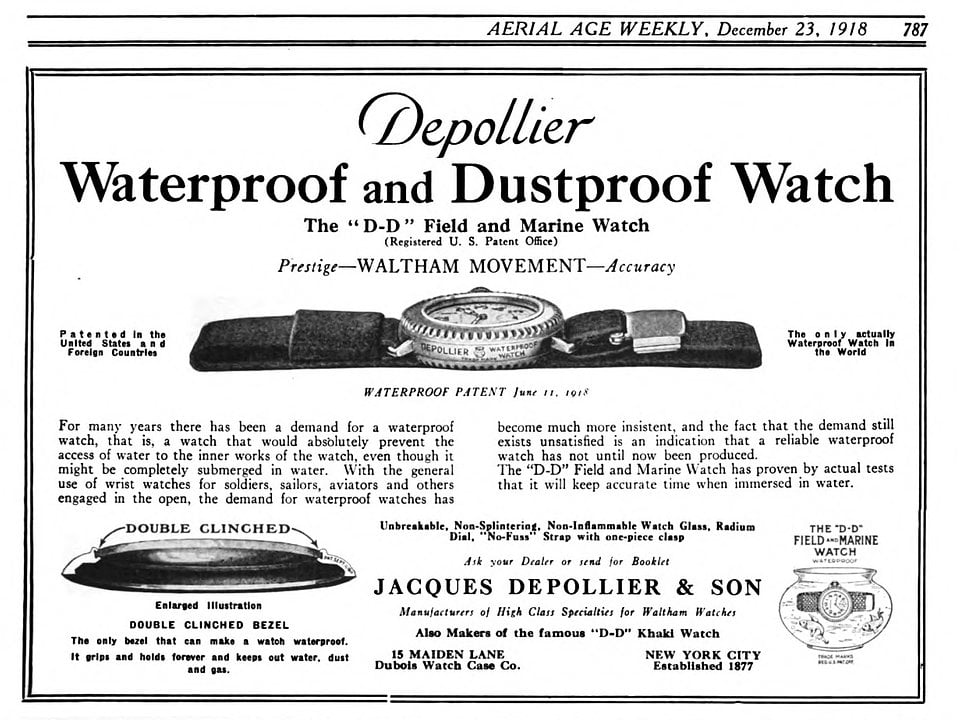 On the watch, the Depollier-Waltham crown works pretty similarly, apart from the fact that you don’t have to worry about cutting yourself. When you twist the crown, you unlock it and pull it out to set the watch. Once you’re done, you simply press the crown down and twist it back into place. The system also includes a thin brass plate that does the job well enough to claim 300 meters of water resistance. This justifies putting “Marine” in the name of the watch. Brass is a soft, non-ferrous metal and an excellent choice for components in which corrosion resistance is important. Its softness helps to keep the water out of the case, and the aesthetic bonus is that it provides a nice patina over time. Not a bad feature in a retro-styled watch. 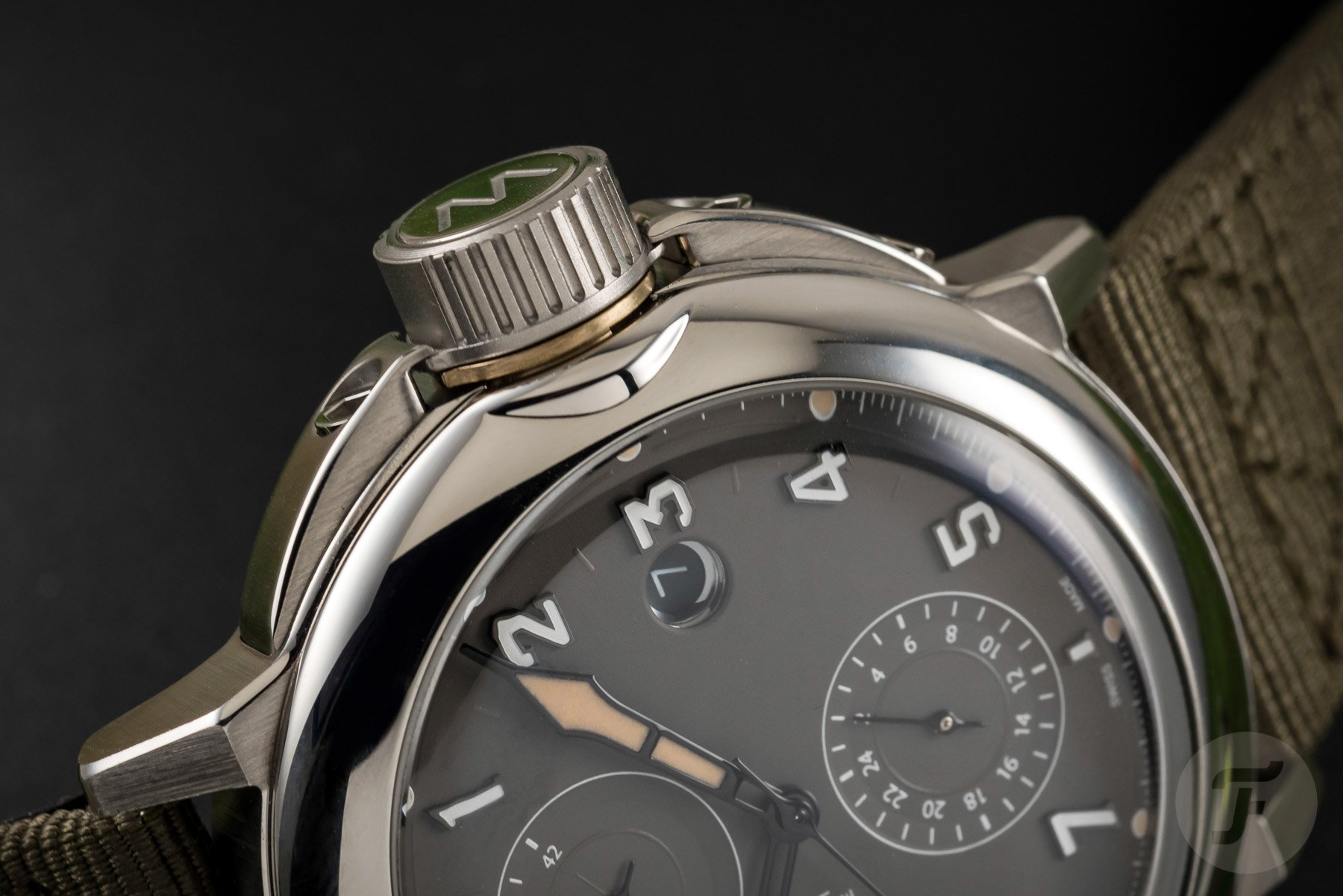 In the case and on the dial

Thanks to the case and the crown, the automatic Soprod C115 stays safe deep underwater. The Swiss-made caliber is a 4Hz modular automatic movement with a power reserve of 42 hours. On the matte military-gray dial, you will find central hours, minutes, and seconds hands. In addition, you’ll see a power reserve indicator at 12, a date at 3, and a 24-hour indicator at 6 o’clock. Over the dial, a domed, semi-box-style sapphire crystal with an anti-reflective coating ensures that every indication is easy to read (the 24-hour indication is a bit on the small side, but that could also have to do with the fact that I can’t live without my reading glasses anymore). The Waltham has a generous amount of strong X1-grade Super-LumiNova on the hands and hour indexes for easy readability in darker situations. This is an attribute you need and seek in a field watch. 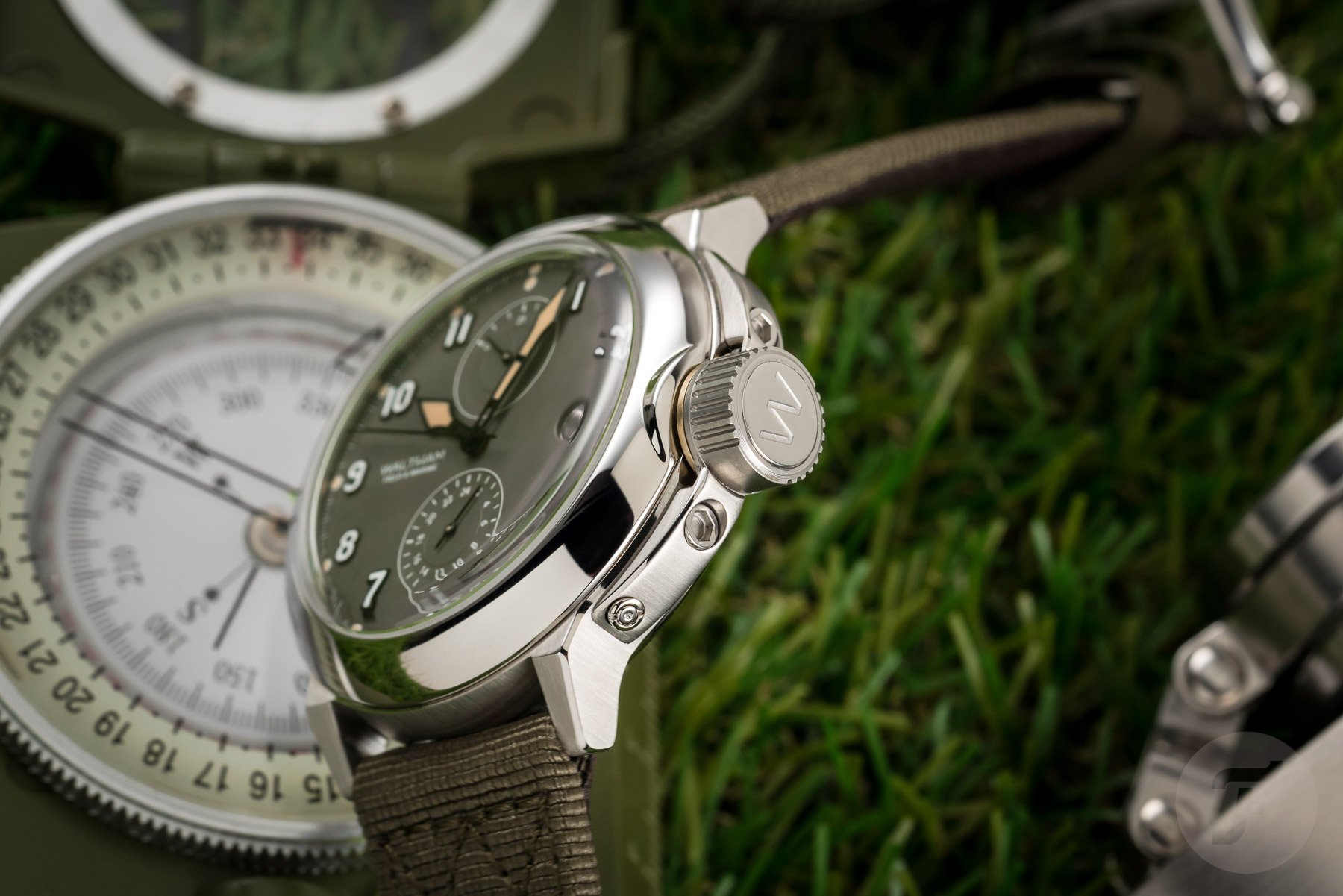 The Waltham Field & Marine Dual Time Grey on the wrist

I’m used to wearing a 44mm Chronoswiss Timemaster with a giant onion-shaped crown. Therefore, the 43mm Waltham with its prominent bayonet crown felt right at home on my wrist. The size and shape caused me no problems, and the look and feel gave me quite similar vibes. The tactical military-green synthetic strap also helped to keep the watch firmly yet comfortably on the wrist.

But if you really can’t cope (mentally or physically) with the field watch’s size increase from 31 to 43mm — you could classify the Waltham Field & Marine Dual Time as a “field watch 2.0” — there’s also the new Bulova Avigation Hack A-11. Waltham also made numerous A-11s for the American military, and these were probably the most famous out of all World War II field watches. The Bulova has also gone up in size to 37mm, but that’s a way smaller jump in diameter than the whopping 43mm of the Waltham. But in addition to the extra timezone — there’s also a Field & Marine Automatic without it in a slightly smaller 41mm case — I do like the fact that Watch Angels has taken a more reinterpretative approach for this Waltham than a “re-creative” one. 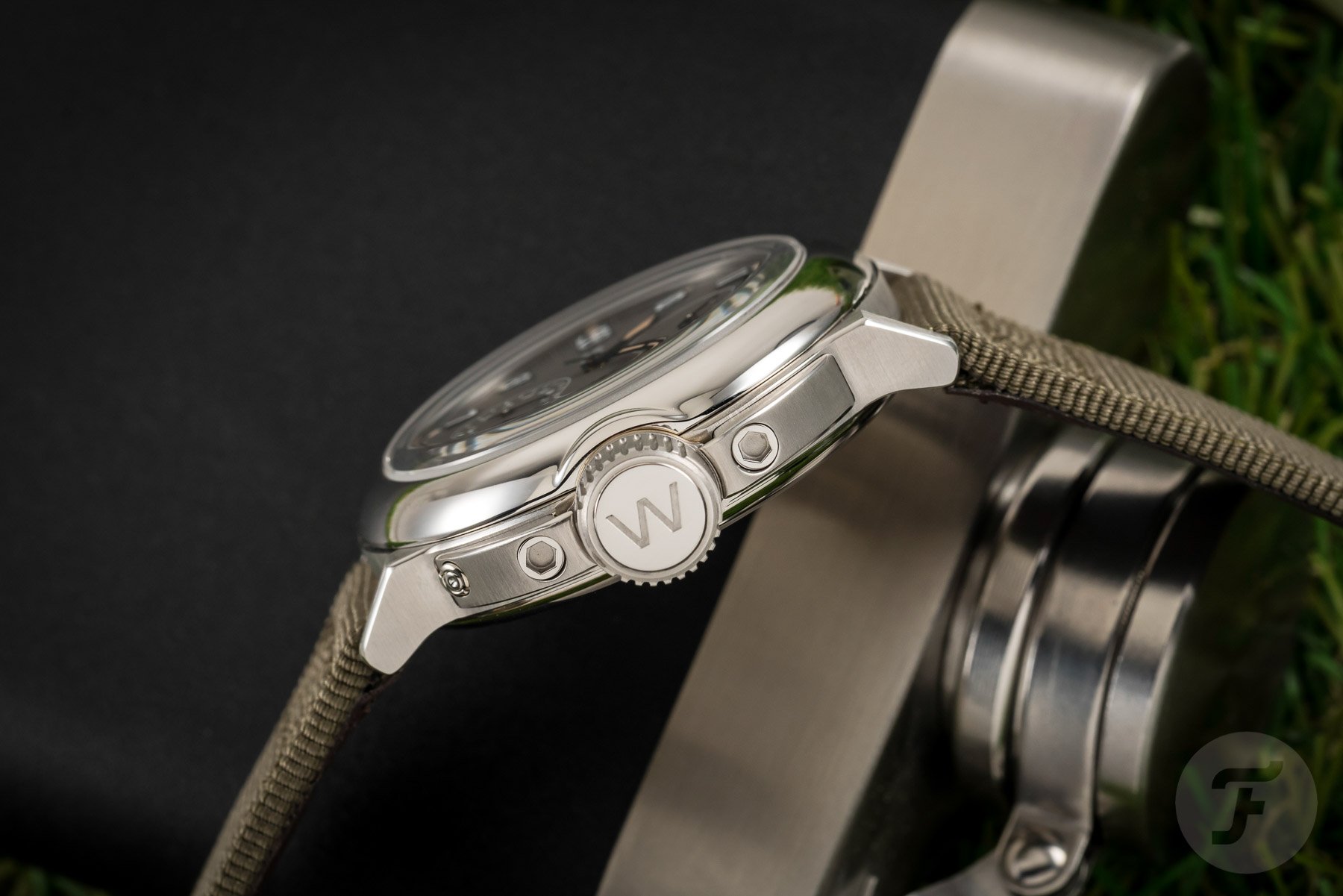 Apart from the bigger size, you get an additional 24-hour timezone feature that works and looks great. The GMT or dual-time is, in my opinion, one of the most practical complications that even has its rightful place in a digitally dominated world. But it only works properly if you know when it’s night or day in your second timezone of choice. And because this Waltham Field & Marine Dual Time Grey has a 24-hour sub-dial, the watch works very well indeed. That’s bonus point number one. The second is the original bayonet crown. It might not be field-watch-like, but it sure is a neat and distinctive feature with an interesting history. I do like that this Waltham is more than just a re-creation. It is an eclectic homage. 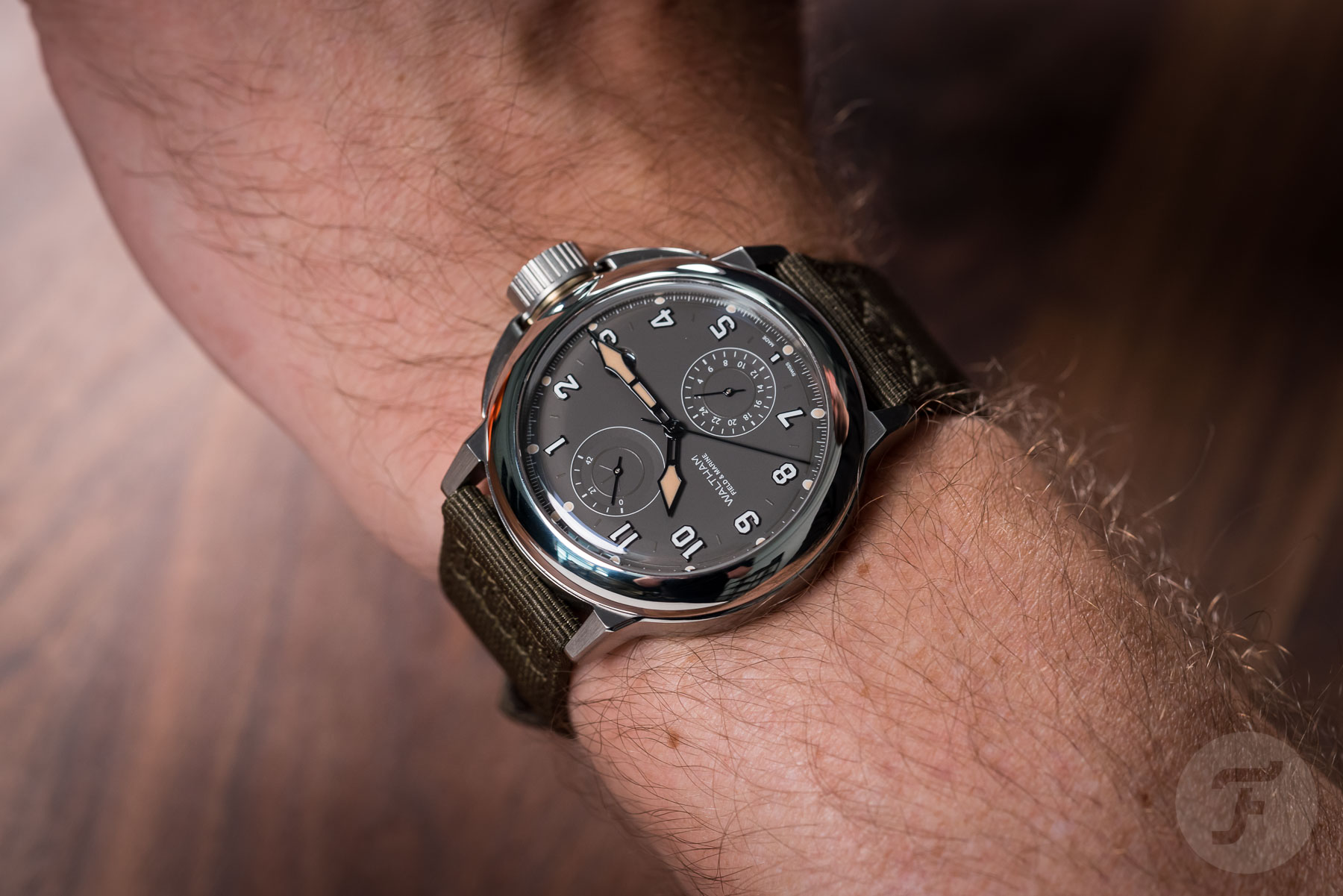 I know, I still haven’t mentioned the price yet. But that’s on purpose. What do you think this well-made, eclectic, historically inspired, sturdy, and functionally on-point timepiece costs? Well, the price of the Waltham Field & Marine Dual Time Grey is €1,425. I believe that this is more than plenty of watch for that price. Sure, the aesthetics have to speak to you, but if they do, I think you’re in for a long and pleasant “conversation”.

Hot Topics
Introducing: The New Seamaster Professional 300M 60 Years Of Bond — With A Special Animated Case Back
100 comments
It’s Time To Invest In A Dress Watch — Our Picks From Breguet, Omega, Grand Seiko, And More
67 comments
Are You Still After An Omega × Swatch MoonSwatch?
65 comments
Sunday Morning Showdown: The Tudor Pelagos Provocation — Pelagos Vs. Pelagos 39
55 comments
The Rolex Waitlist Conundrum — How Much Will The Price Of Your Watch Increase While You Wait?
48 comments
Popular
A Question From A Reader: “Which Modern Speedmaster Is Closest To The Original Moonwatch?”
Robert-Jan Broer
14
Hands-On Grand Seiko SBGR311 Limited Edition Review + Overview of GS Service Costs
Robert-Jan Broer
5
#TBT Top Vintage Seiko Divers – They’re All Here!
Michael Stockton
16