The Transylvanian micro is staking its hopes on you!
Rob Nudds
comments 37
Share

I reviewed the Peren Hintz way back in October 2020. It feels like a lifetime ago, mired as we were in the onset of the second wave. The optimism of late summer had faded and I was left staring down a long wintry tunnel and sorely in need of respite. Well, this quirky little weirdo from Transylvania certainly provided it! My first thought (and comment) on this watch regarded the odd color-combo adorning the dial: orange and burgundy are set against a parchment background. Curious? So was I… Read on to find out how you can make this unusual ticker yours.

The Peren Hintz emerged on the back of the Peren Nera and, thus, had a lot to live up to in my mind. Why? Because I’d loved the Nera. It was also a very strange watch. Its deep teal dial was supposed to recall the water of the Devil’s Lake in Transylvania. I mean, you don’t get a much cooler inspiration and result than that! The uni-directional bezel boasted only raised indices on its outer, blackened edge, which makes it appear non-functional at first, but later on, makes it seems strangely self-confident and charmingly off-base as a result. 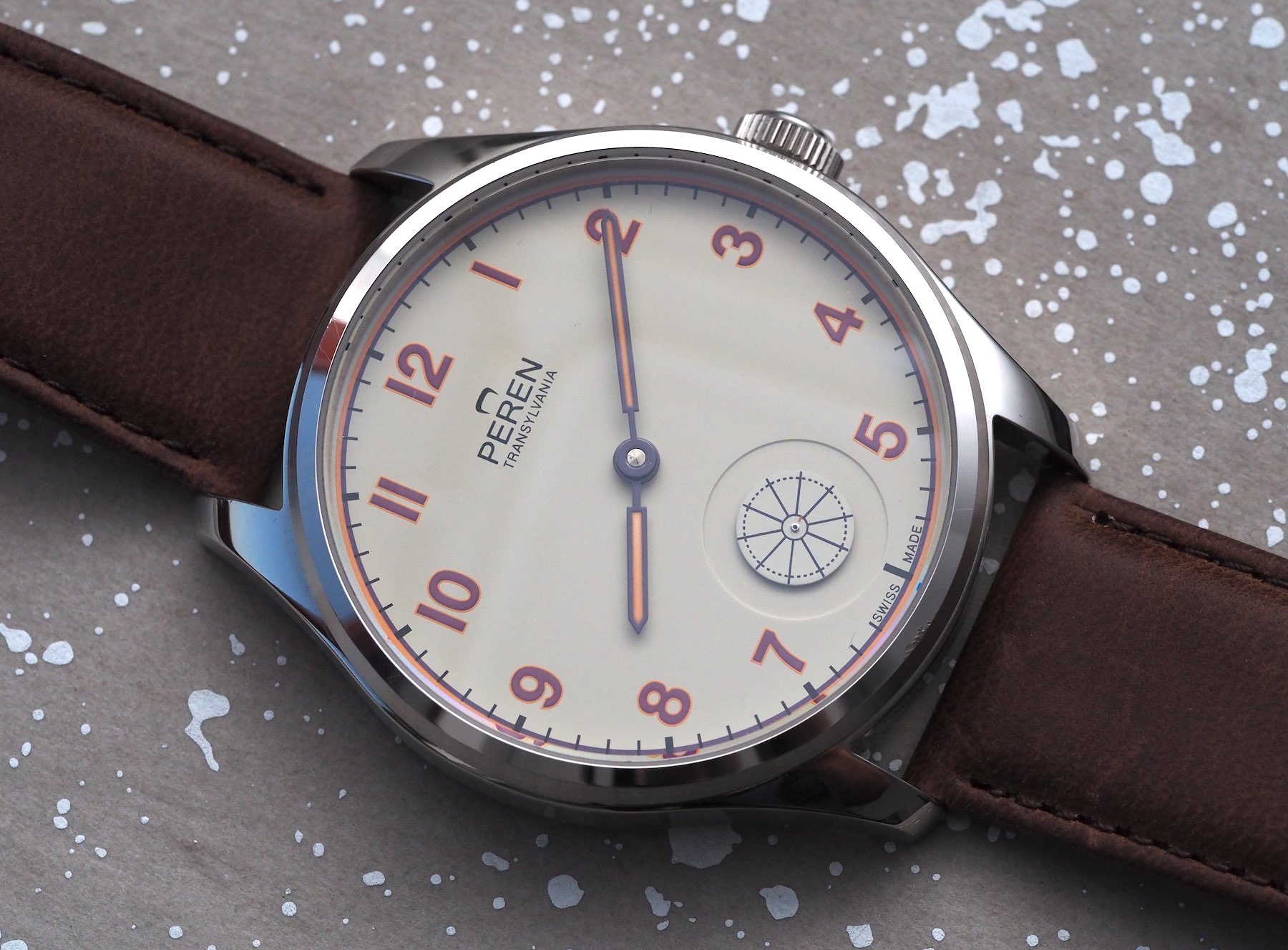 The Hintz did a good job in competing with its adorable forerunner by being entirely different. Andy Bica, the brand’s owner (and donator of today’s giveaway watch — thanks Andy) had the good sense to try something entirely new for the brand. The choice began with the movement: the ever-ready and ever-popular ETA 6498. This wide, manual, relatively flat mechanical movement is a fun choice for watches in this price point looking for an old-school, pocket watch style movement that affords its wearers a lovely edge-to-edge case back view without breaking the bank. 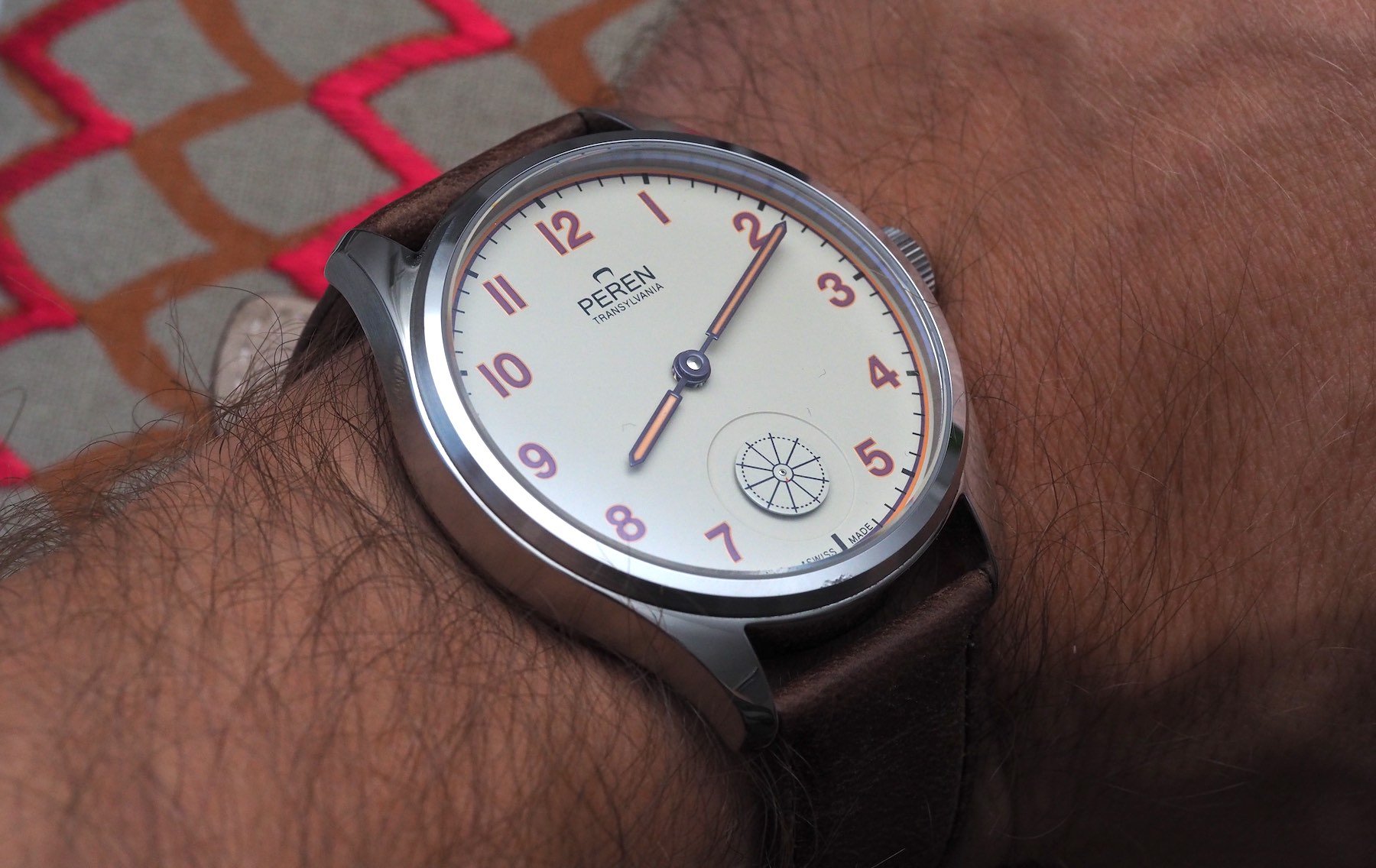 Around the 6498, a very handsome watch sprung up. The wide-open dial chose to deliver its message with color and a seldom-seen seconds wheel at 6 o’clock rather than through flashy or oversized fonts. The hands are crisply cut and well made, colored to match the burgundy numerals edged with a contrasting shade of orange. 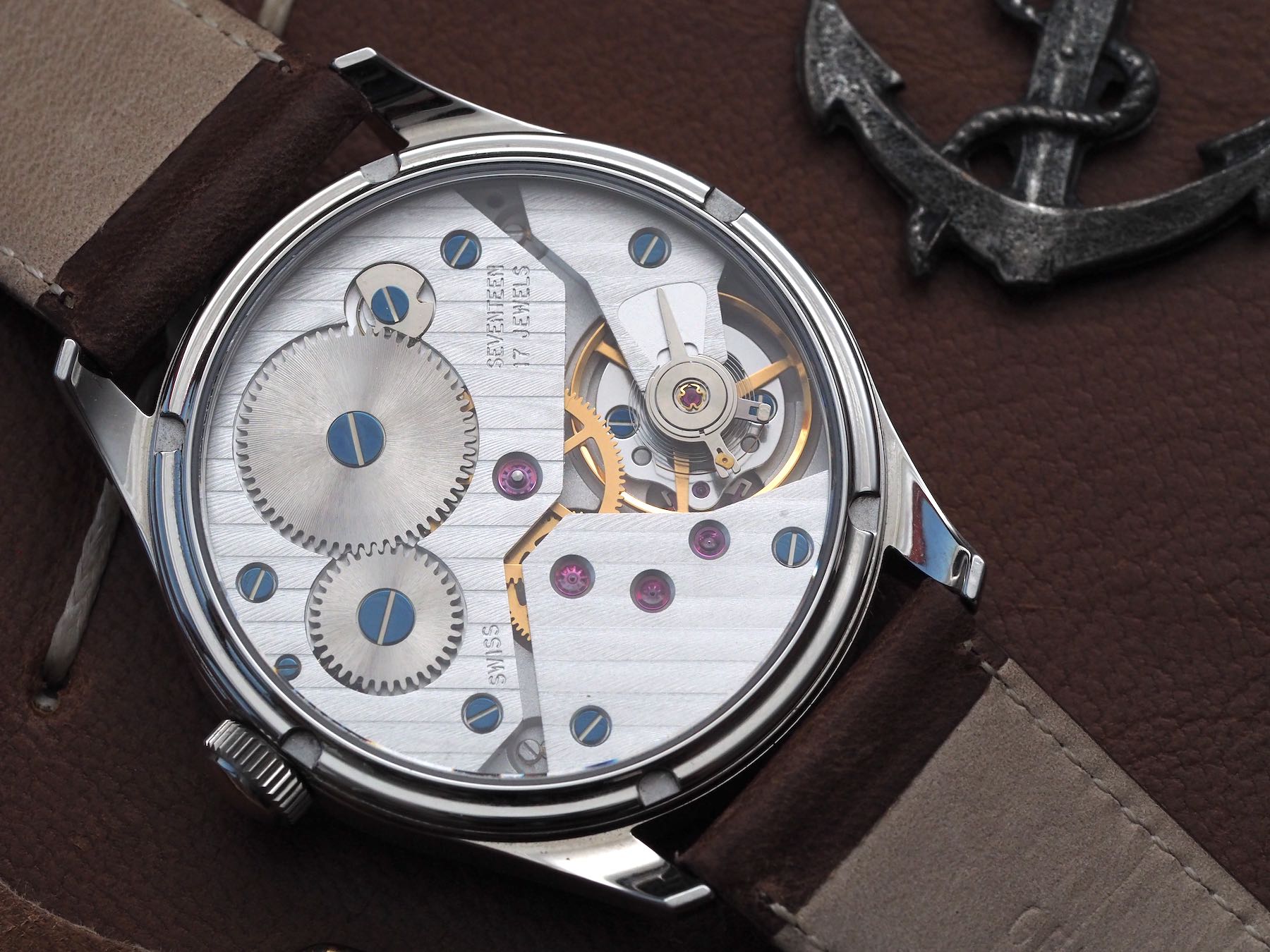 That seconds wheel at 6 o’clock is inspired by the “Andesite Sun”, a massive circular construction in the Carpathian mountains, sitting in close proximity to the Great Calendar Temple and pointing to several Dacian buildings. The disc mimics reality. While you might be able to track this with your eyes while the disc is moving (as it does as long as the watch is running), it is actually segmented ten times (into portions of 36 degrees each). That means each running segment of the going seconds disc is actually worth six seconds, not the five you might more commonly expect for the wheel to be really functional. 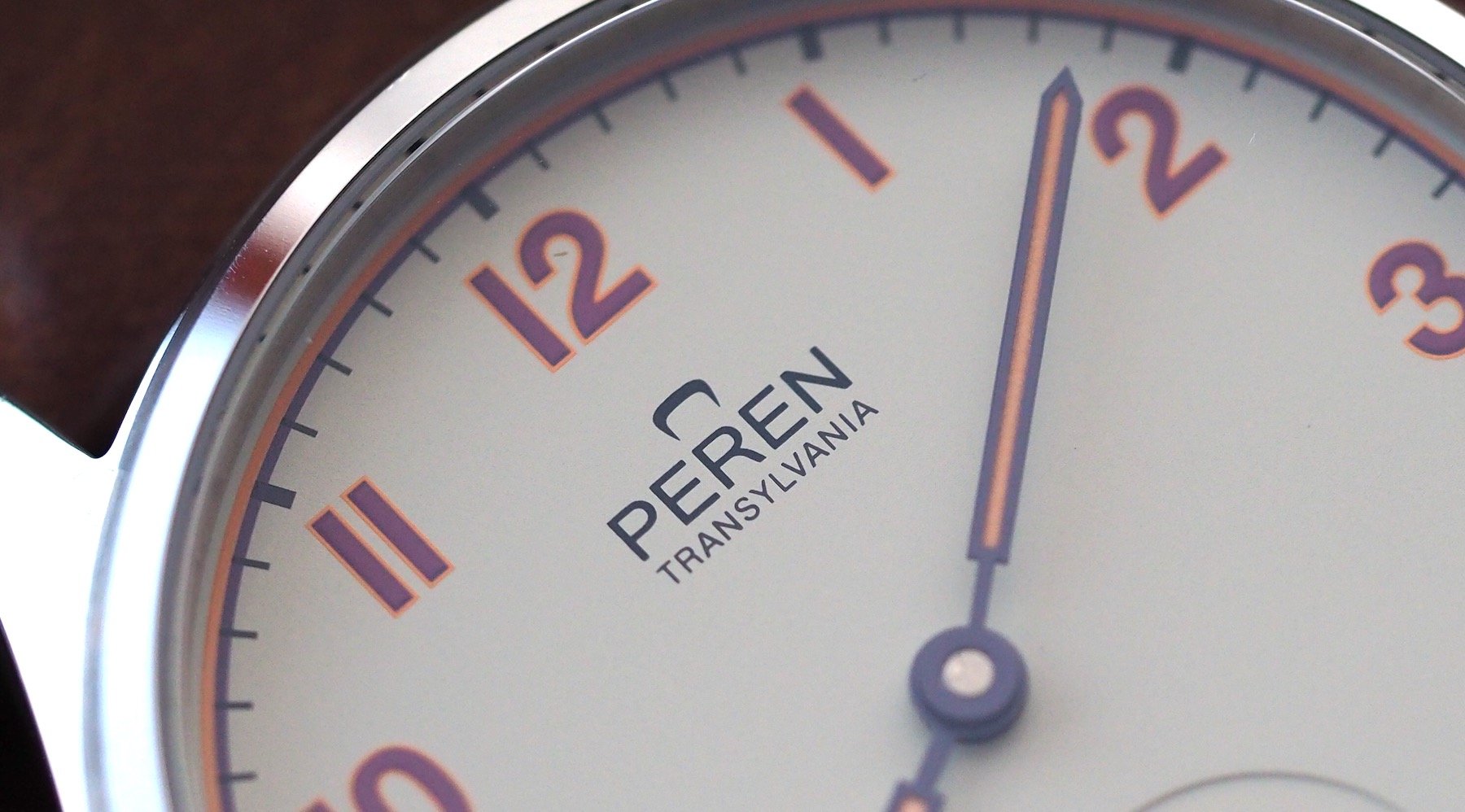 And while on the photos of the pre-production prototype I’m wearing in this article it looks as if there is a small orange dot towards the inner edge of the wheel by which it would be “read”, on the model I’ll be sending the lucky winner, there is no such marking. This wheel is a visual treat and a running indicator and nothing more. Can you tell the time with it? Yes, if you have amazing eyesight and incredible focus. Does it matter if those traits are not in your locker? In my opinion, not a jot. 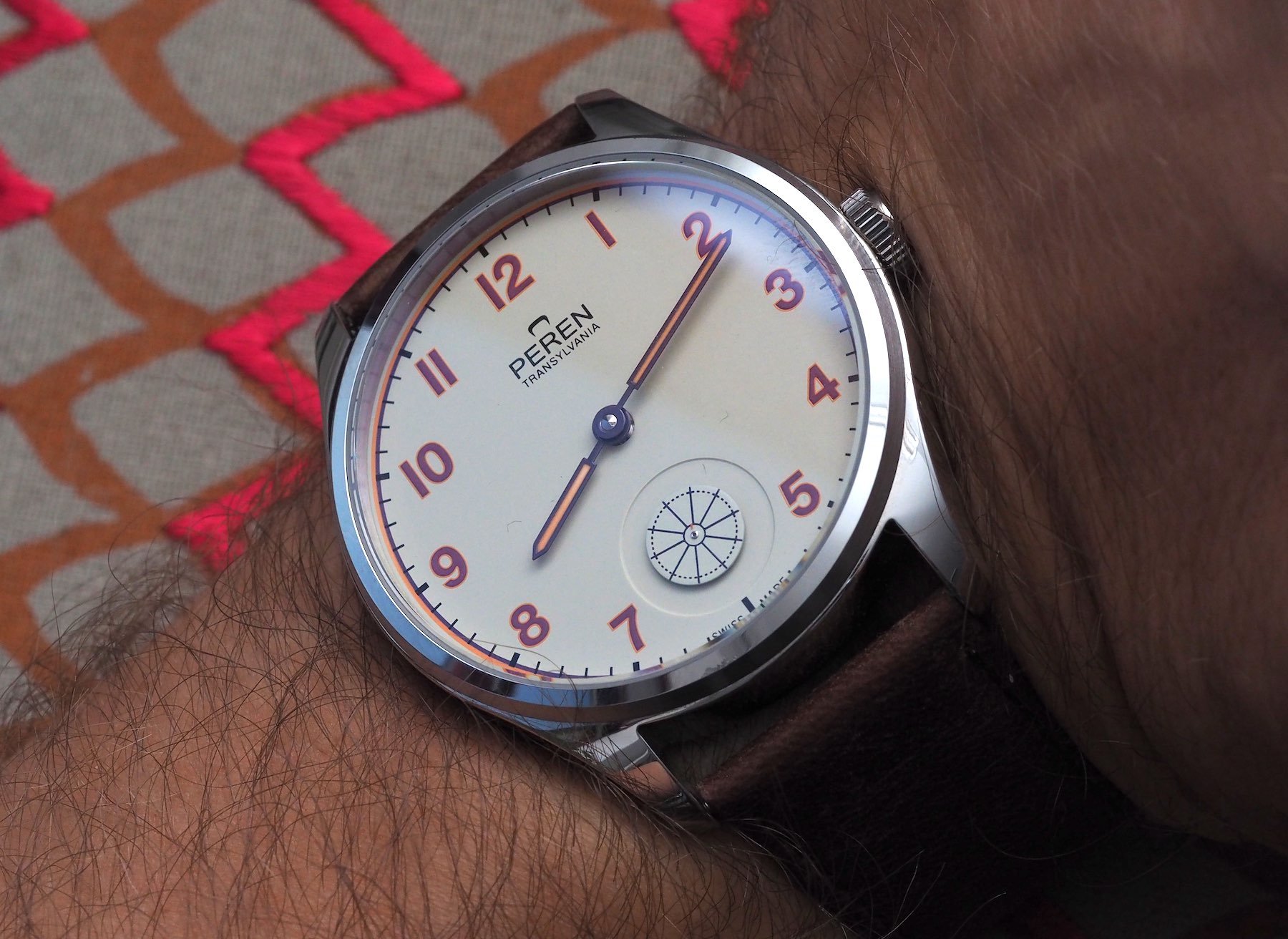 How to win the Peren Hintz?

This time around I’m going to ask you a two-part question and I’d like, as usual, thorough, polite, but mostly amusing or insightful answers. I’ll be looking for verve, wit, a sense of integrity, and passion when I’m selecting the new owner of this tasty timepiece. By the time you read this, I will be sunning my pale Celtic body on the beaches of Mallorca, and I will not decide upon a champion until I return to my desk in early August. I will, however, be reading from the water’s edge, so bring your A-game.

What is the most interesting method of displaying the seconds you have ever seen or could imagine, and what color combinations would you like to see on watches that rarely get any “wristpect” (wrist respect)?

Good luck, one and all. I look forward to shipping out this whimsical 42.5 by 11.2mm hand-wound wristwatch delivered in a stainless steel case, water-resistant down to 100 meters to its new home when I return to Germany. In the meantime, learn more about Peren here.