Watch Mods That We Love — A Cool Selection Of Jazzed-Up Watches From Tissot, Tudor, H. Moser, And More

Are mods divisive? Yes, and I’m not always a fan. These featured watches, however, are mods that I adore. Done right, officially or unofficially modifying a watch is fun, even taking our horological passion a step up to wrist-worn pop art. For others, mods are a chance to acquire a watch that is one of a few — or even one of a kind — and more like a piece of art than a micro-machine for telling the time. Perhaps it’s just what we need in a world of same-same vintage love and diver’s tools that never break the water’s surface.

All brands in this article have been at it for some time, and we know them as niche manufacturers in their own right. With one exception, these are not one-off mods by the owner of the watch. Almost forgotten are the days of forums where a wacky aftermarket dial and some crazy Ploprof-ish hands could give you fun for less than €300, breaking copyrights and losing your guarantees along the way. Thanks to Instagram, (some) modified watches are now even factory-approved. These watches haven’t lost any of their arty cool, and (don’t tell) some are actually cooler than the originals. 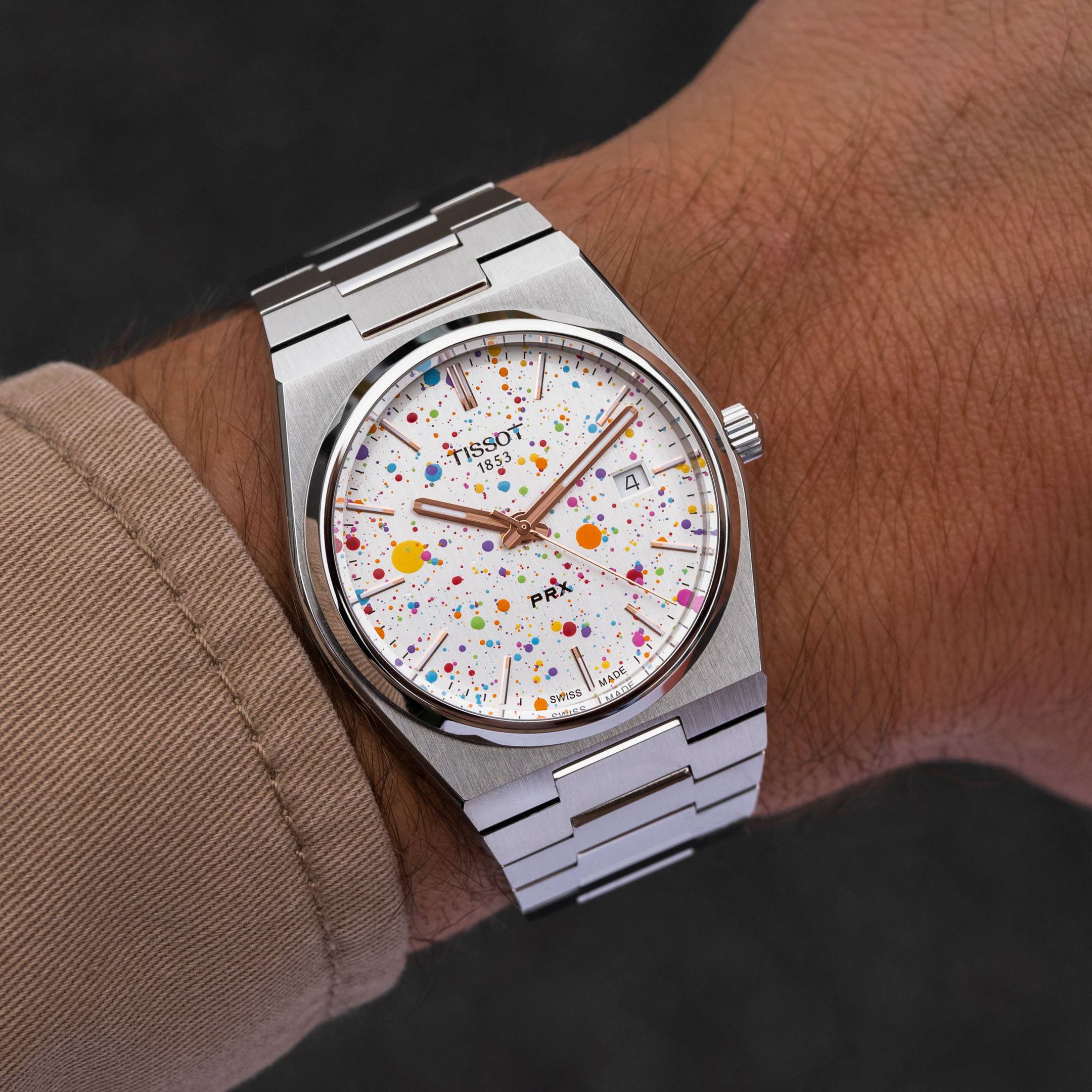 IFL Watches is a successful Scandinavian online watch retailer that has a long-standing relationship with Chris Alexander, aka The Dial Artist. And yes, they have dared to mess with the huge success of the Tissot PRX. The small dots and galaxy-like patterns are mainly done by micro-brushes and lend the PRX an enigmatic air. The white-dial version might be called the Arctic Sky, but is a summer-fresh splash of tutti frutti candy. The Dial Artist’s colorful touch is also found on a special edition of the Oris Divers Sixty-Five that recently dropped with the PRXes and is a minty-green cocktail of cool. The Dial Artist has work that spans IFL-collab G-Shocks to private commissions on Rolex Explorers. And doesn’t the ’70s chic of the Tissot PRX look even better with a touch of pop art? At €990, the first batch has already sold out, but it should return. 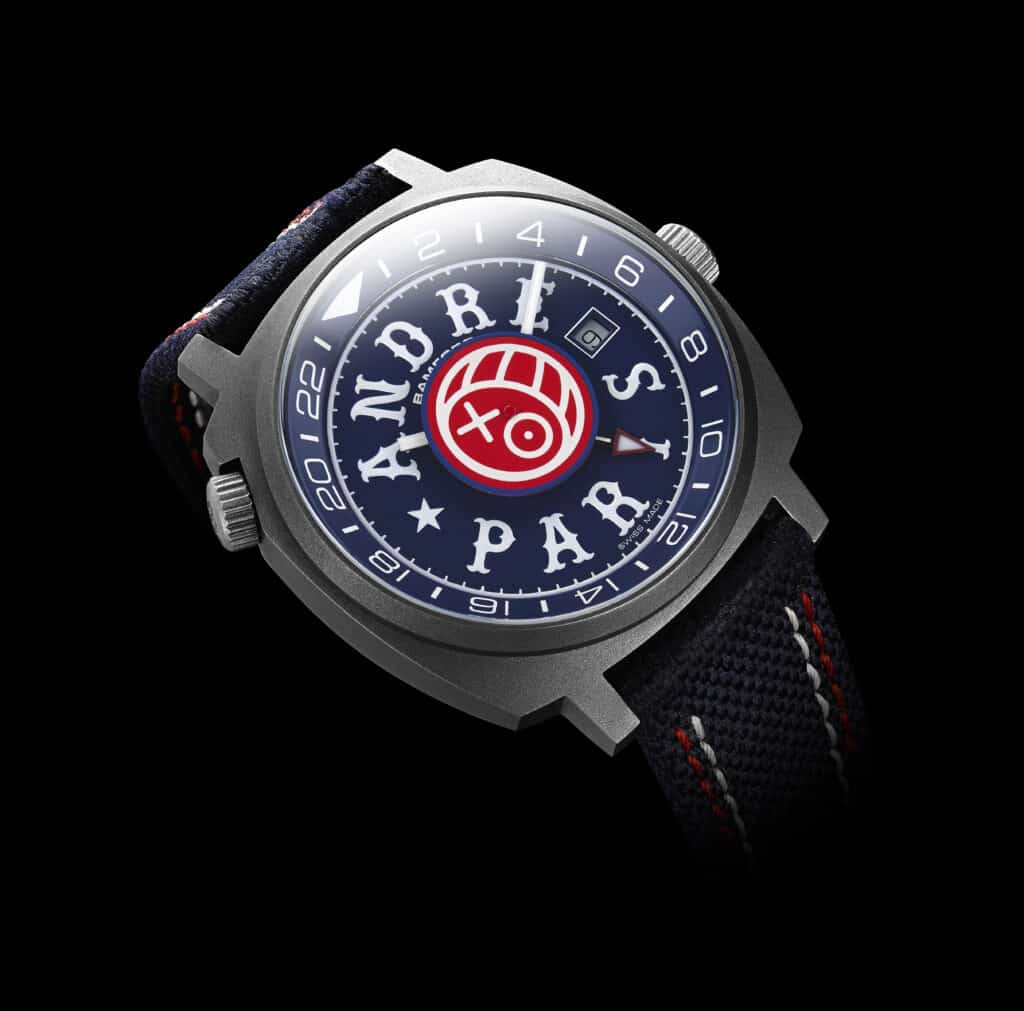 George Bamford burst on the scene with blacked-out Rolex mods to the Crown’s chagrin. Now established with big-brand collaborations, there’s still love for the quirky. George tells me, “We collaborated in 2018 and have worked together through two concept stores and built a great friendship. I have always wanted to do a project with André [Saraiva] and love this watch. The rotating Mr A makes me smile, and there is something very cool about it.” The Bamford London GMT is a slim 40mm travel companion in its normal guise. Here, Bamford corrupts the functional GMT in the best possible way with the mad color dash of André Saraiva’s graffiti tag. Centered on the French-blue dial, it acts as the seconds indicator, turning while the hour and minute hands pop out and remain legible. A massive Andrè Paris logo fills the rest of the dial, making it a wrist-worn piece of pop art. At £1,333.33, this 50-piece run has not sold out yet. 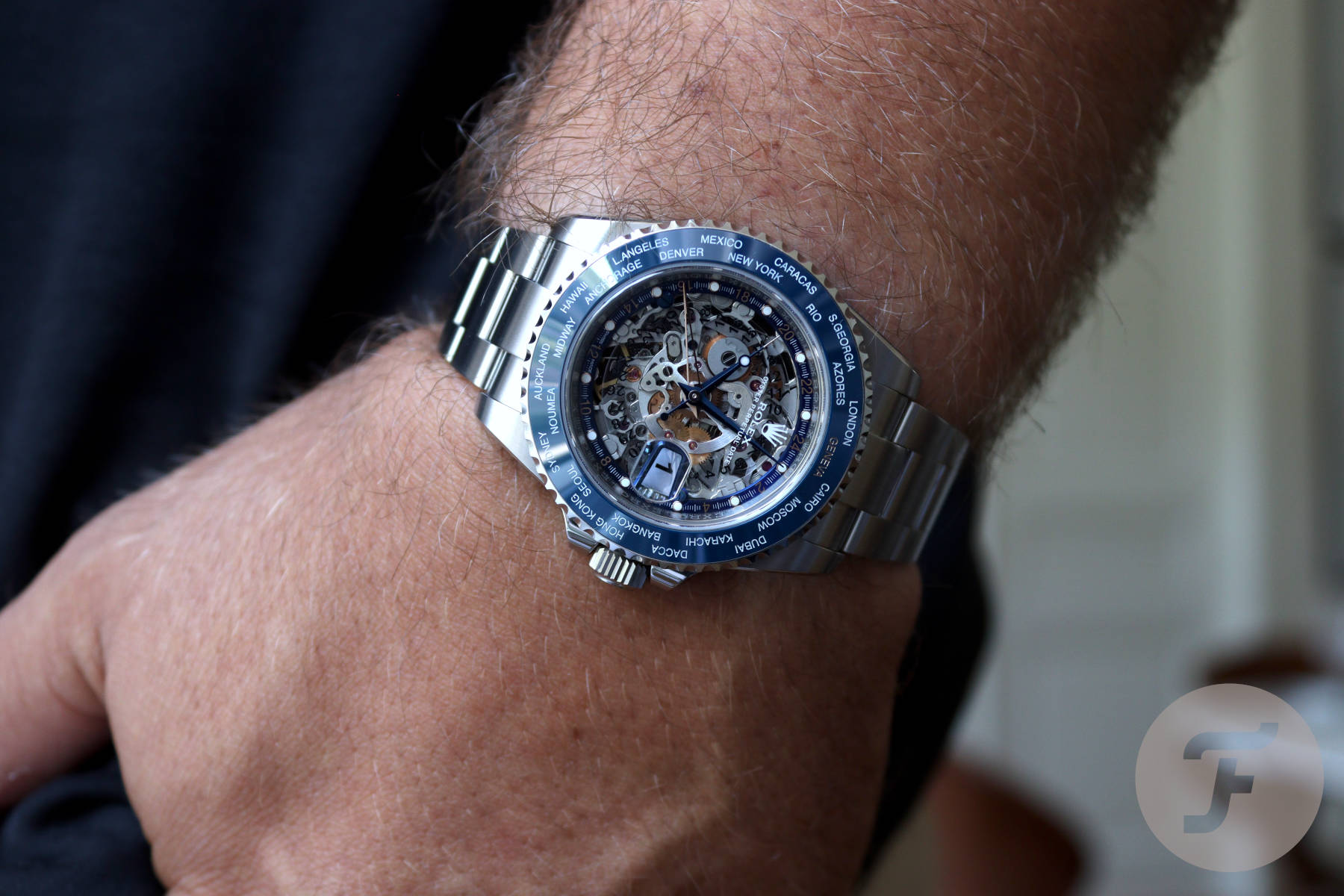 I know; there was a watch by ADG in another story of mine last week, but the company has become known as the über-modder of the watch world. To be frank, the term “mod” is too cheap for the Artisans de Genève, as these guys only take on private commissions that can easily double the initial financial outlay of the Rolex base model they have reconfigured here. With a history of thorough reworkings of Rolex and Patek Philippe grails, controversy follows the atelier. But equally fervent was my own surprise when I visited ADG’s boutique-style workshop last year, and this is proof enough. With the World Traveler, a GMT-Master II becomes a completely new watch, featuring a charming blue city ring encircling a skeletonized dial. But what gets you is the heart that they put into the small details, and do you know what? The execution of the reworked bridged and general case finish often beats the Crown at its own game. Price on inquiry. 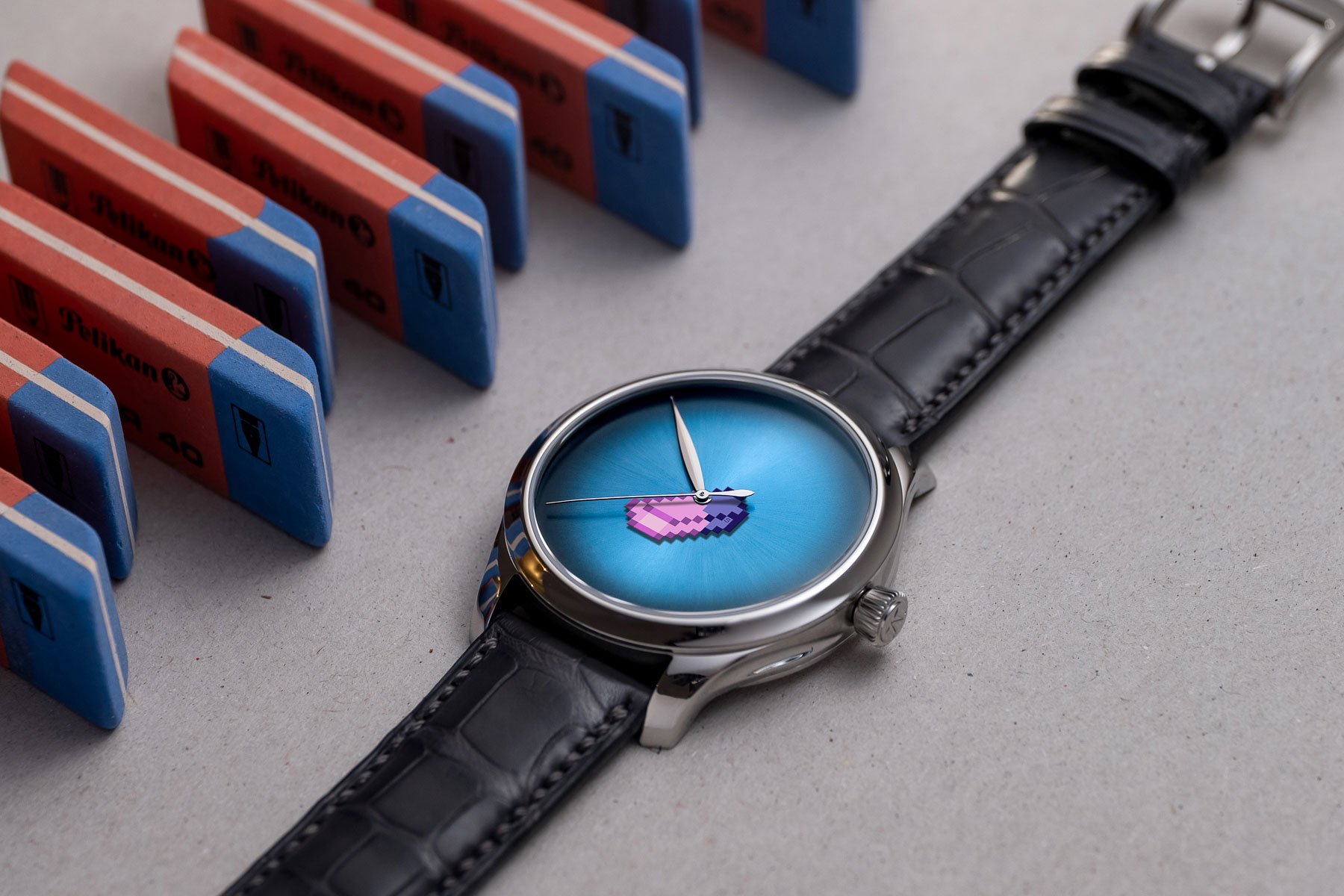 OK, this is a case of art meeting horology, as Romaric André of seconde/seconde/ is considered an artist than anything. He began with cheeky mods based on vintage Omega Seamasters with thoughtful, charmingly odd additions. This watch marks is his entry into the big game of Haute Horlogerie, and who better to team up with than H. Moser? Is it an arty match made in heaven or a goofy piece of high horology? As Lex told us in his video last week, perhaps we shouldn’t take ourselves too seriously. The Endeavour is minimalist beauty for the wrist, powered by the gorgeous HMW200 caliber. But in its smooth 40mm case, this time, it’s a beguiling piece of art with a massive pixelated eraser for an hour hand. It came out in 2021 for €20,900, the eraser artfully and ironically representing an erasure of the brand itself. It was a cheeky touch on one of the best fumé dials around that once again showed Eduoard Meylan poking fun at his own business of watchmaking. This deserves nothing but respect. 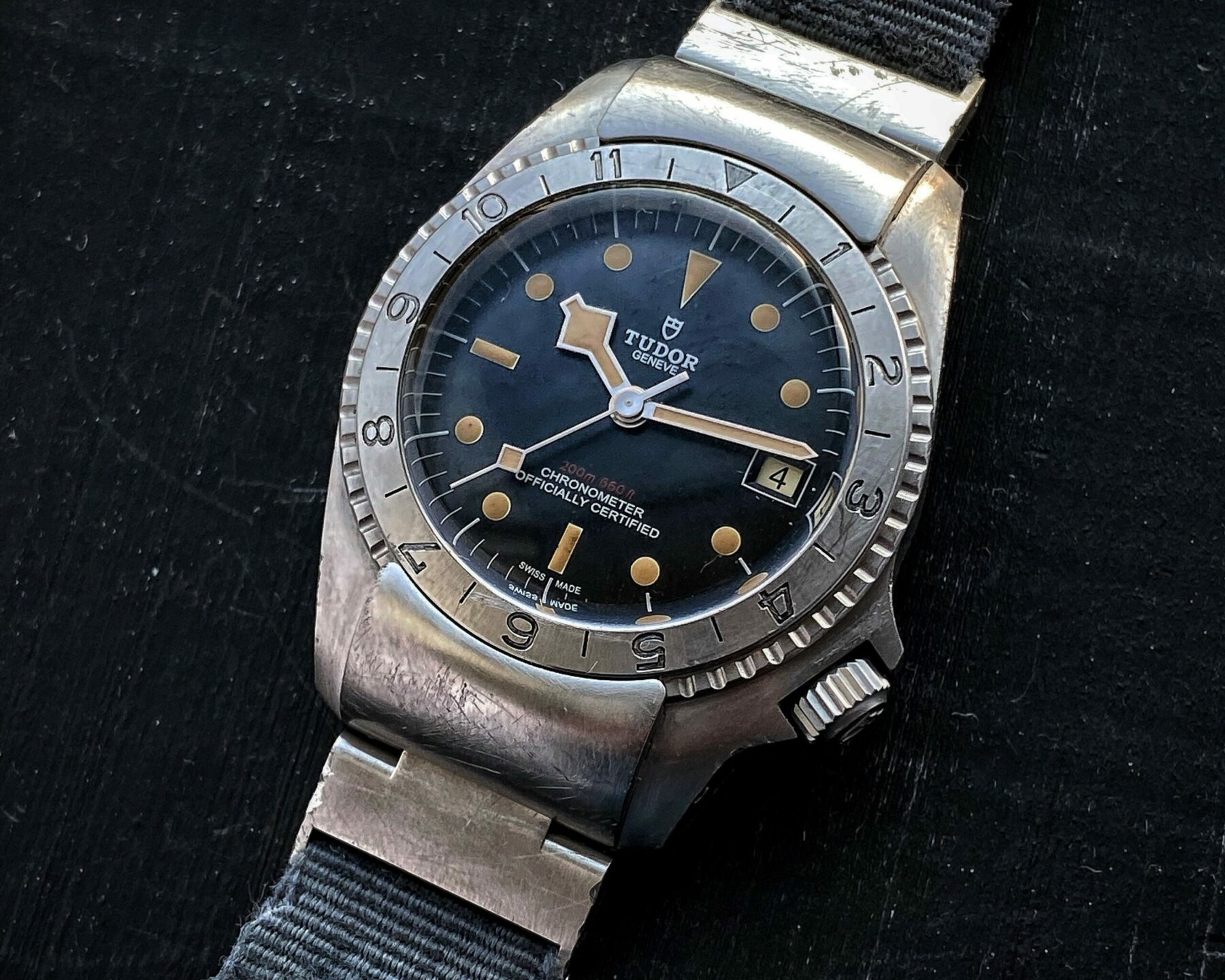 To end this story, I had a few other artists in mind with their pop-art-sanctioned mods. But a recurring image in my mind was the exact opposite of bright colors and soft leather. Rather, it was one of the studied and meticulous “gnarlyification” of the quirkiest, least successful Tudor diver out there, the Black Bay P01. This watch belongs to proliferate artist, leader of the Viva Bastardo cult, podcaster, and well-known Instagram geezer Phil Toledano. On his IG account @misterenthusiast, you will be treated to a world of love for forgotten Italian supercars, the enigmatic Jaguar XJ220, and his watches. I thought I had quirky taste, but Phil puts me to shame. His curated collection of forgotten Pateks, Rolex Midas models, and select 1970s quartz cool is entrancing. If I sound like a fanboy, I am. I actually loved the P01, but its long-lugged design made it pretty much unwearable for me. 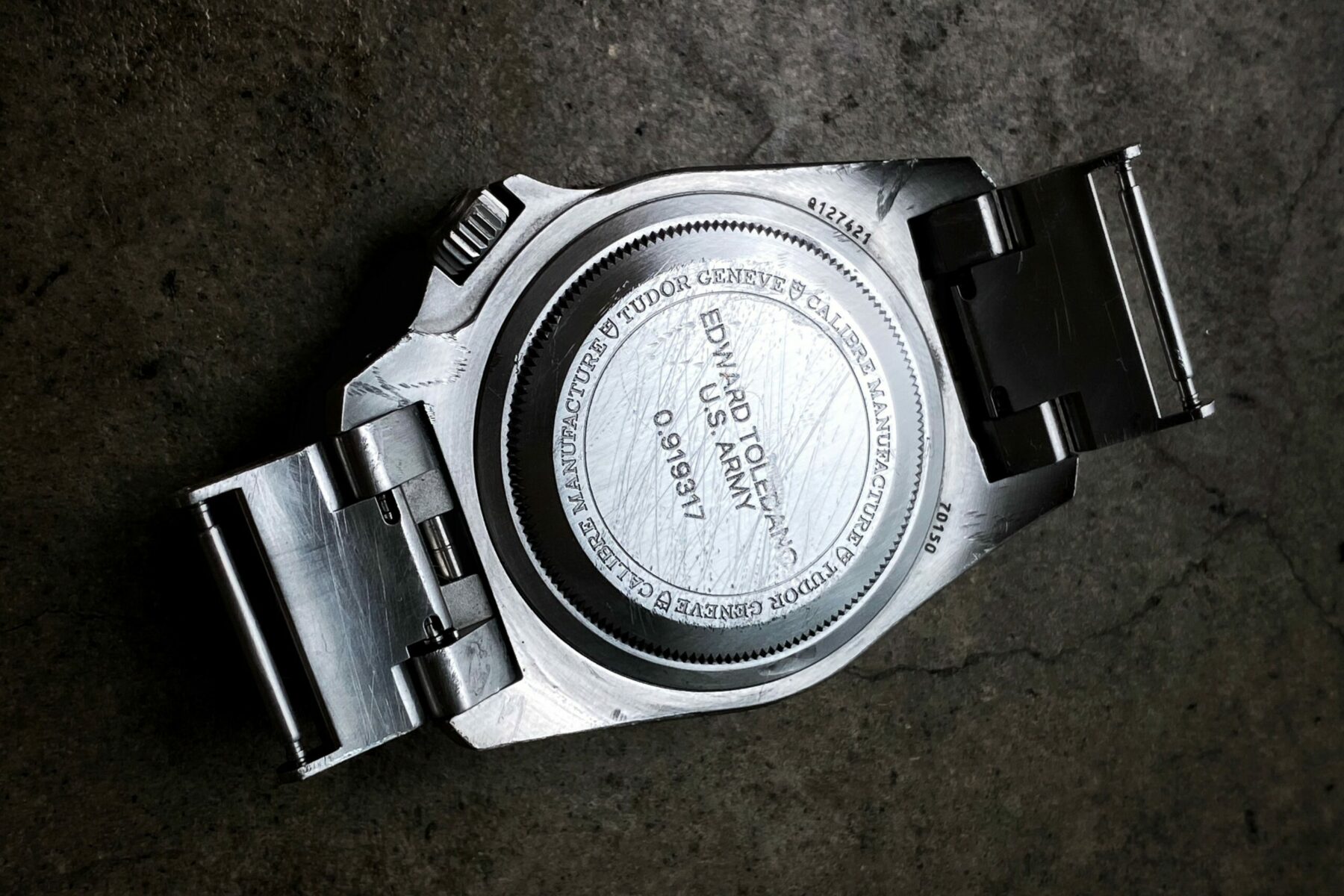 Is this extreme P01 madness or mad genius?

Phil Toledano has made the P01 a near-destroyed work of art. Looking like an artifact dug out from the trenches of WWI, it has gained a soul. Phil tells me, “The P01 was such an interesting idea, but when the watch came out, it was missing its soul. It felt scrubbed of its origin, sanitized for popular consumption, so I decided to give it an imagined history, culminating with my father’s own US Army serial number on the back.” The Tudor P01 was an interesting exercise but never a success, and it was too off-center for such a big brand. Here, however, it looks like a recovered prototype put to the test by US Army troops on active duty, with Phil’s modding including a grinder, files, and actually baking the dial. And to achieve what? Well, to me, peak vintage perfection. Is it sacrilegious or pure genius? You be the judge of that.

Where do you stand on this, dear Fratelli? Are you a fan of watch mods? Or does their cheekiness or even official sanctioning put you off? As always, let me know in the comments.