Watch collecting is a funny old hobby. What you collect and appreciate in a watch will be totally different from the next person. But therein lies the joy of watch collecting, as we all have our own tastes regarding our horological wrist companions. Sometimes, however, our tastes are pretty specific, and it’s possible that we never quite find “the” perfect watch. Many of us settle for the closest available thing. But we don’t have to. That’s why brands like Artisans de Genève exist — to allow customers to not have to settle. You can take that watch that’s so nearly just right for you and push it to the next level of personal perfection. Indeed, one such person has done just that with his Rolex GMT-Master II, turning it into the World Traveler.

I always need to preface an article about Artisans de Genève with a reminder: these projects are undertaken at the request of the brand’s clients. The client approaches the atelier with their watch and an idea. Artisans de Genève makes that idea a reality. As such, not every project will resonate with everyone, nor are they supposed to. I recently wrote about a project that Artisans de Genève did for esteemed Italian footballer Gigi Buffon. In general, the reaction was not favorable to the watch, and that’s fine. Just remember, these projects are a unique realization of a single individual’s dream. Why do I write about them, then? Well, I do it because it’s that very dream that is so romantic to the inquisitive human nature. To make the impossible a reality is infinitely exciting. That’s what I love about Artisans de Genève. 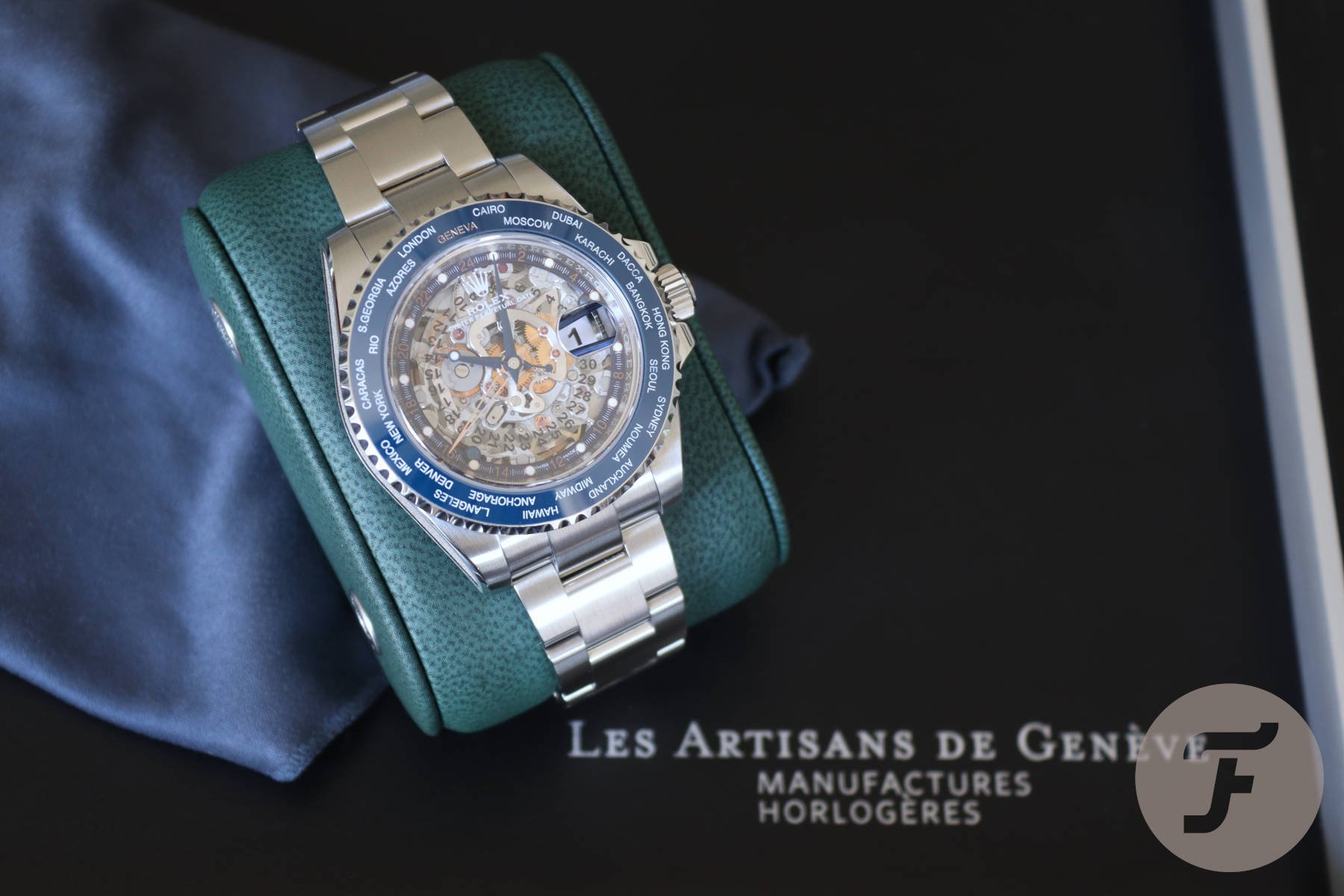 Popping in to visit on my travels

When I was in Geneva at the start of the month for Geneva Watch Days, I made sure to pop in to see the wonderful people at the atelier. It’s always amazing to see the quality of the brand’s work up close and personal. Polished images are one thing, but seeing is believing. I saw the recent Sea Shepherd’s Challenge and the Rusty, both excellent watches. The Aventurine sheen of the Sea Shepherd’s Challenge particularly blew me away. However, when I was offered the chance to see something new ahead of its public announcement, I was more than a little intrigued. When the World Traveler GMT was handed to me, it took a few minutes to take it all in. 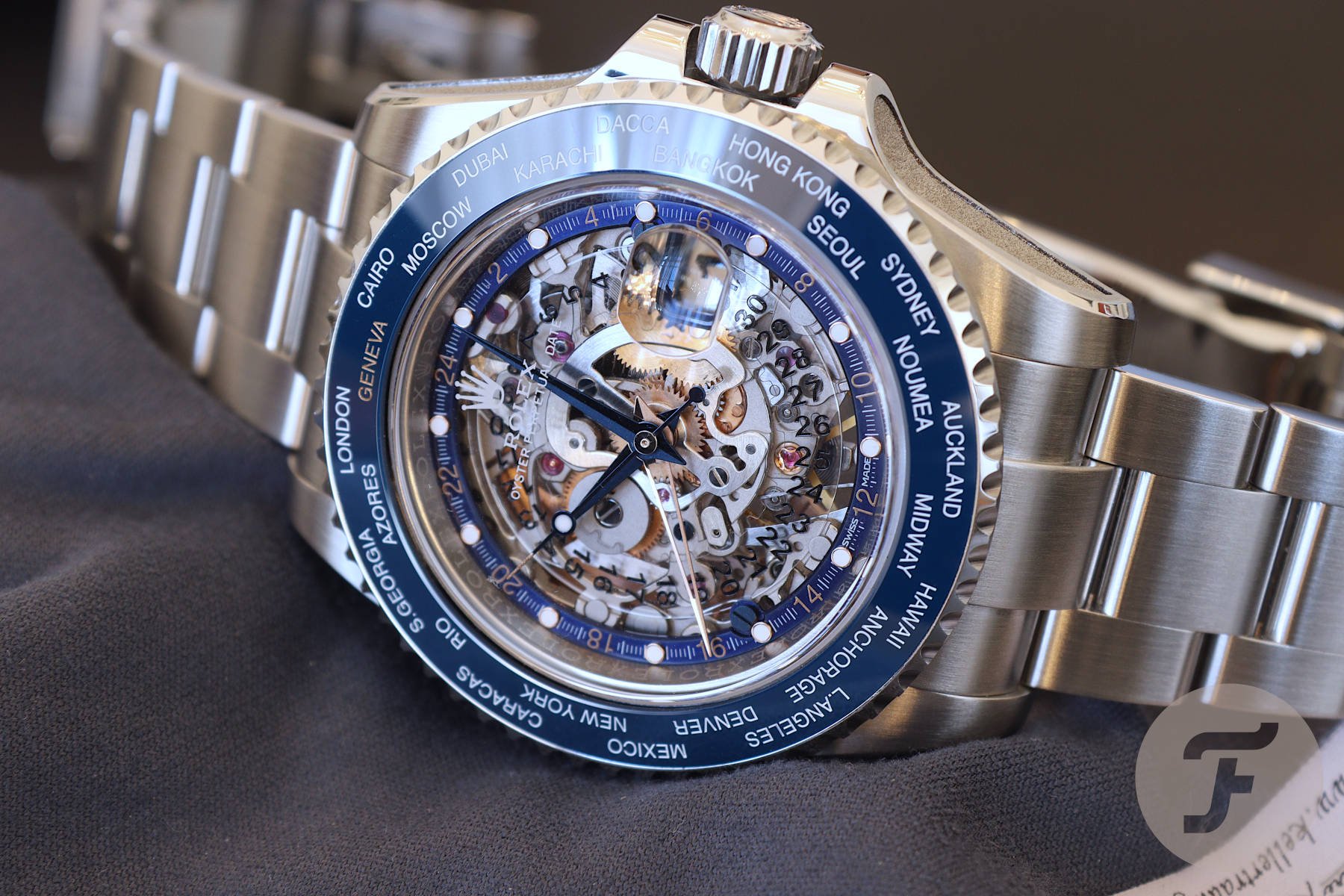 Be a world traveler in any city

What we have is a Rolex GMT-Master II at heart. There’s no hiding the classic 116710 spirit. But Artisans de Genève has worked closely with its client to take the watch in a wholly unique direction. Two main features jump out at you immediately, signaling the departure from the classic 116710 blueprint. 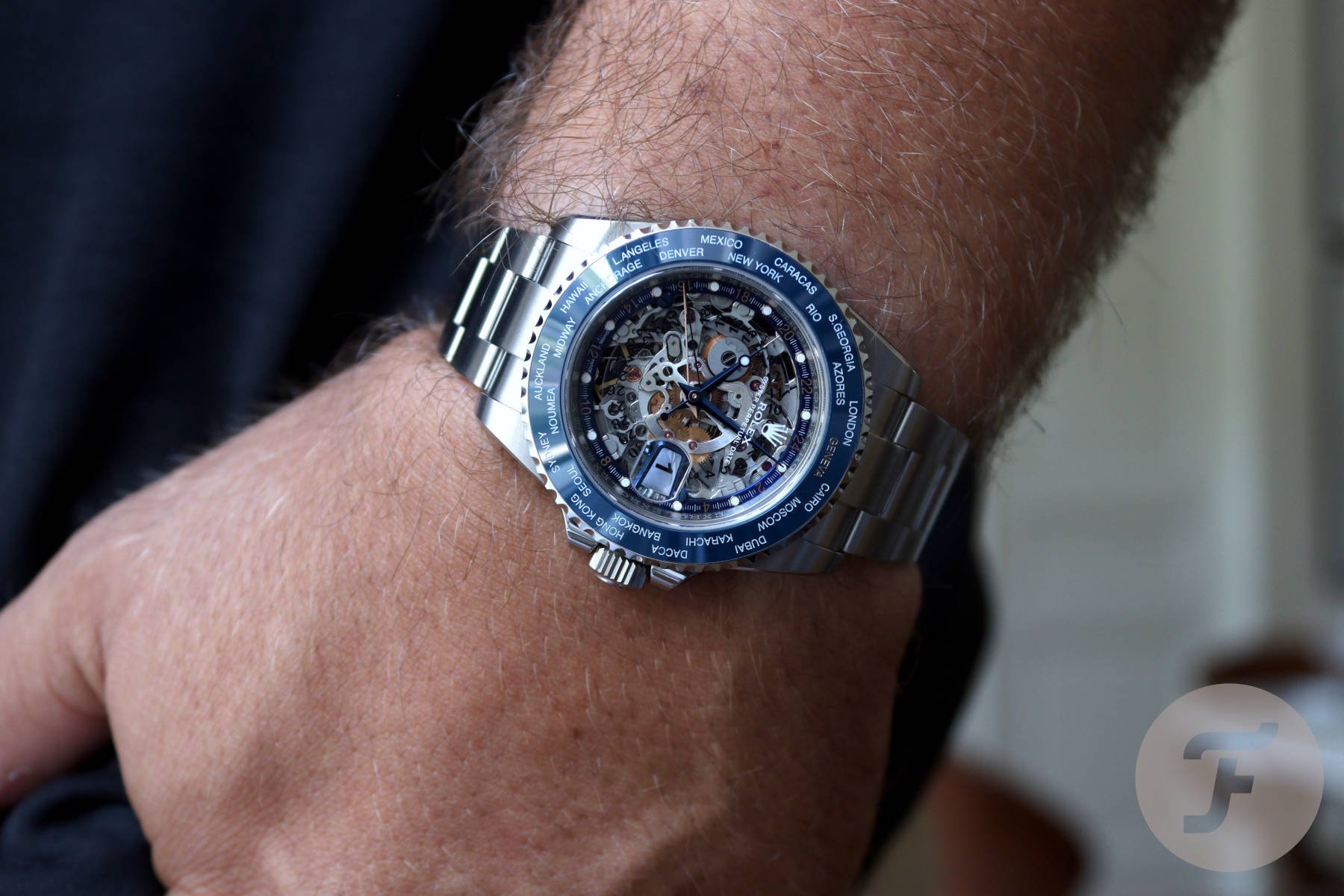 As far as I know, Rolex has never used a city ring on its GMT-Master bezels. I am willing to be proven wrong on this matter, though. Let me know in the comments if you can prove otherwise! Here we see a blue ceramic bezel with cities engraved around the outside. These are not just the regular cities you’d expect to find. Instead, the client specifically chose to replace some cities with ones he had visited throughout his career. I’m not sure what the client’s job involved, but it’s clear that he was a world traveler too. One notable example is Geneva. Paris is most commonly the city used to represent the GMT+1 timezone, but here we see Geneva instead. It’s highlighted in rose gold, which suggests the mystery client resides in Geneva and wanted to signal the city as his home time.

While it may take a moment to get used to seeing the 24-hour bezel replaced by the city ring, it’s hard to deny that it looks pretty good and breathes new life into the GMT-Master concept. I’d be pretty open to seeing Rolex adopt this as a regular option in its lineup. 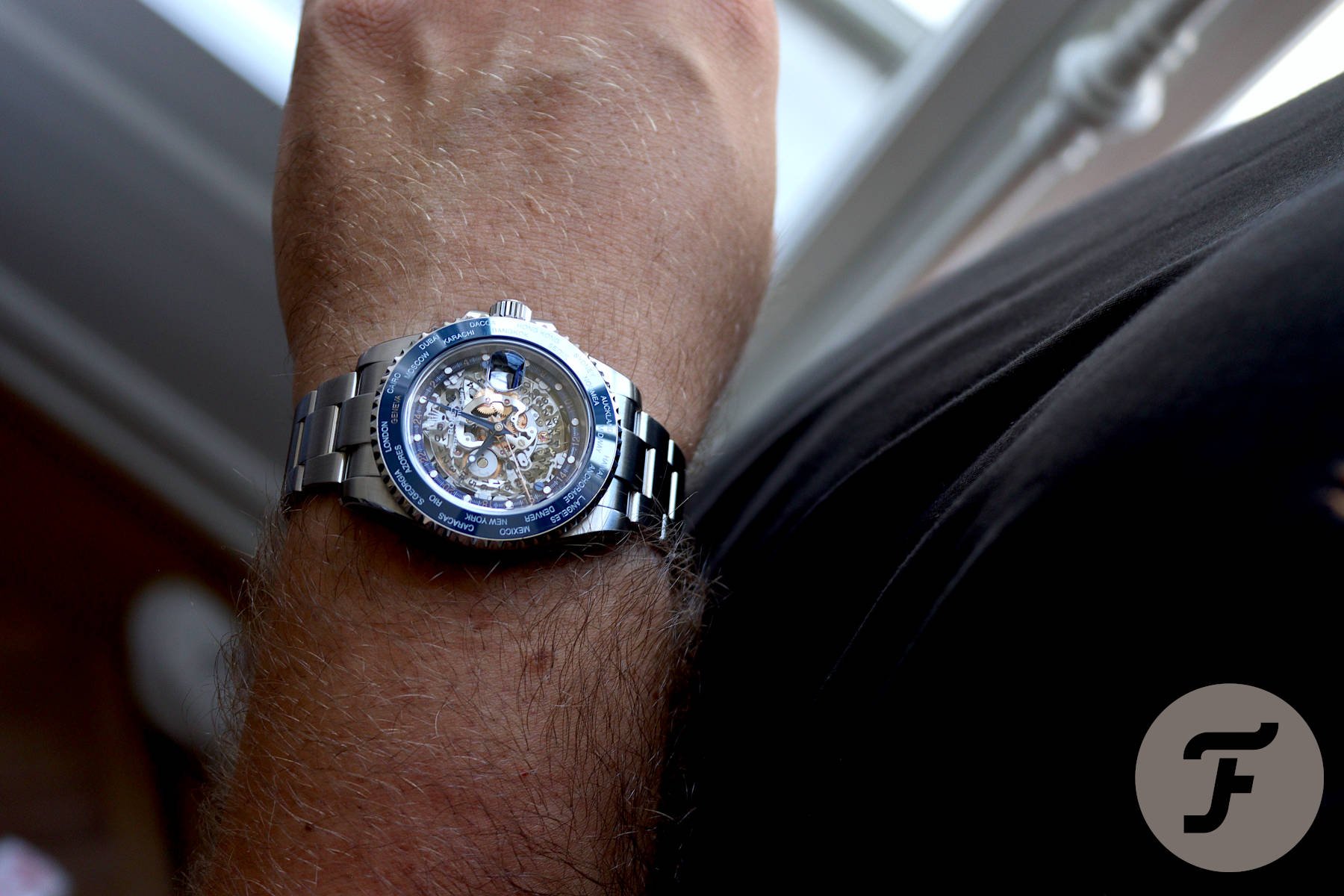 A special view from all sides

Skeletonization is a bit of a hallmark feature for Artisans de Genève. Not every one of its watches features a skeletonized dial, but many do, and it’s something the atelier has mastered. The World Traveler GMT is no exception. The 3186 caliber is hand-skeletonized, with a transparent sapphire dial allowing each detail to be meticulously admired while on the wrist. And there’s plenty to admire. The atelier’s craftspeople have painstakingly applied a succession of handcrafted finishes, including polishing, beveling, sandblasting, and more. Who knew tool watches could look this good?

The movement is not just visible from the dial side. A solid gold rotor powers the automatic-winding caliber, also visible through the open case back. 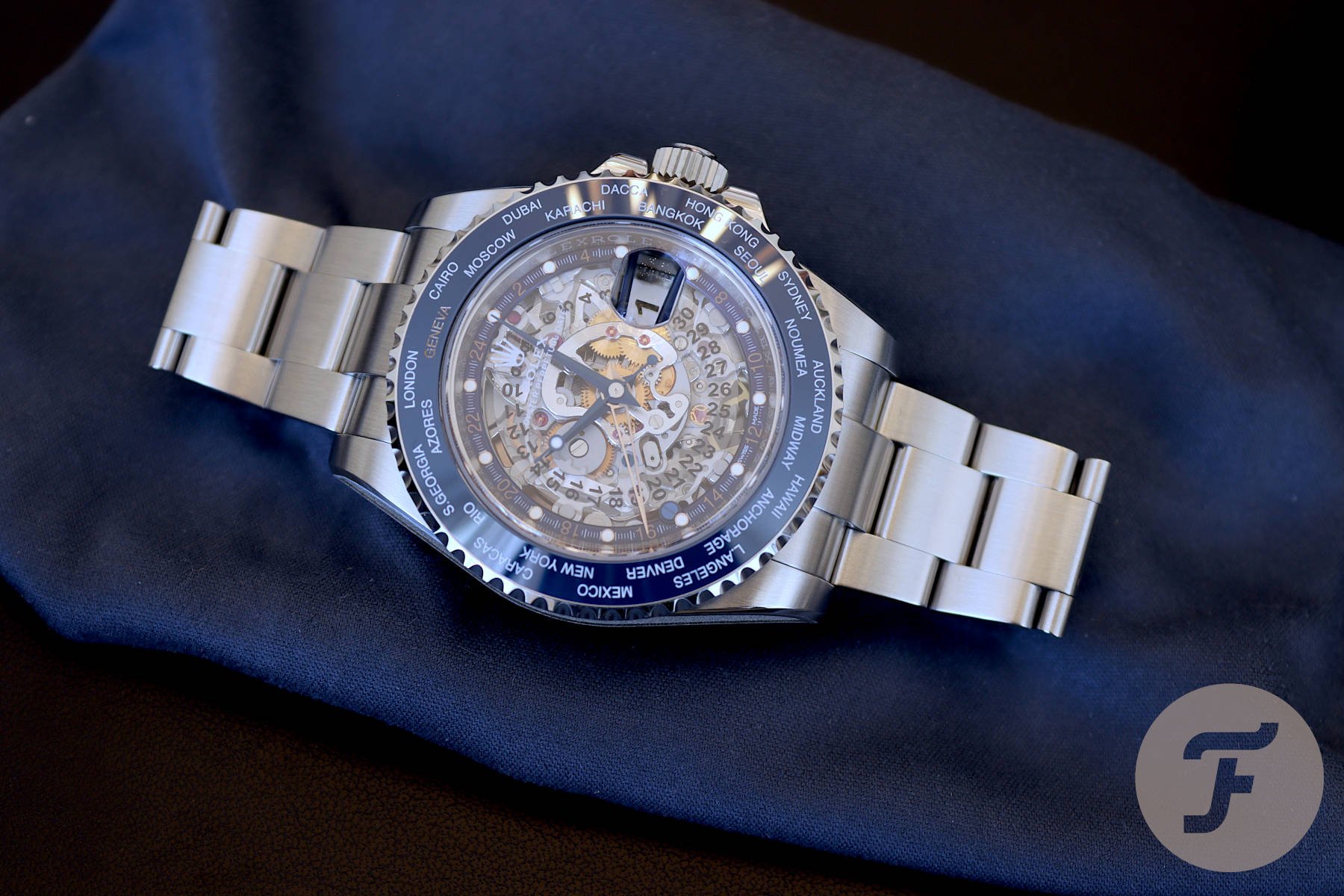 Savoir-faire from head to toe

It’s not just the inside of the watch that has received the touch of Artisans de Genève’s craftspeople. The sides of the 40mm GMT-Master II case are gently milled, creating a recess. This micro-blasted recess gives the insides a contrasting “granulated” texture. Finally, the main case surfaces are satin-brushed, and the bevels are hand-polished. The combination of surface textures improves the utilitarian nature of the GMT-Master II case, in my opinion. The bracelet links receive the same satin brushing for a seamless finish and integration with the case. 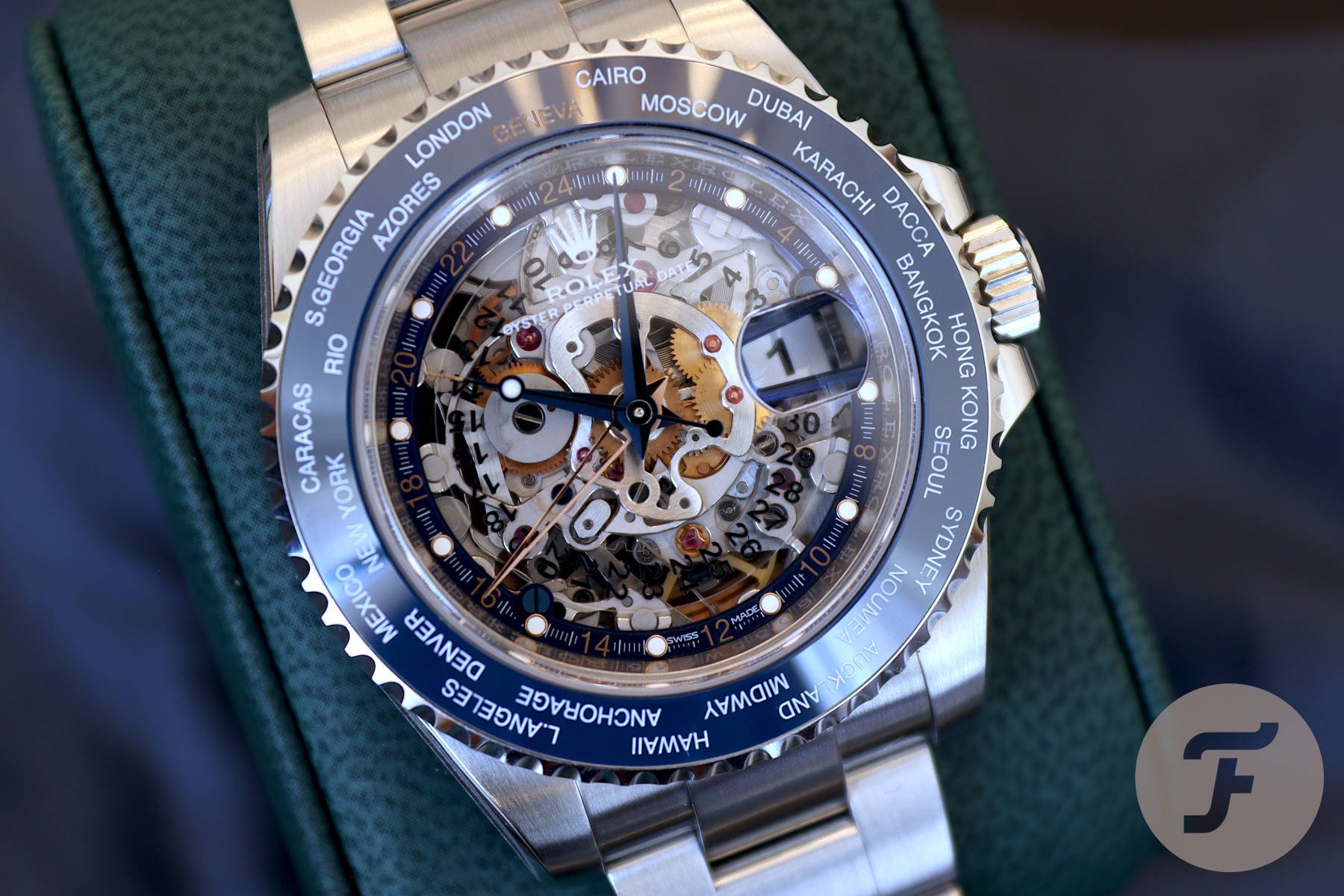 The hands are also a departure from the traditional hands you’d find on a GMT-Master II 116710. The Mercedes handset makes way for a beautiful hand-beveled dauphine handset. The hour and minute hands are flame-blued, with the rose gold GMT hour hand skeletonized to provide some contrast. With a gold painted tip, a blued lollipop seconds hand completes the look. The handset is incredibly classy and more befitting for the World Traveler and its elegant vibe. The World Traveler GMT may be a tool watch at heart, but it’s certainly not flying economy. 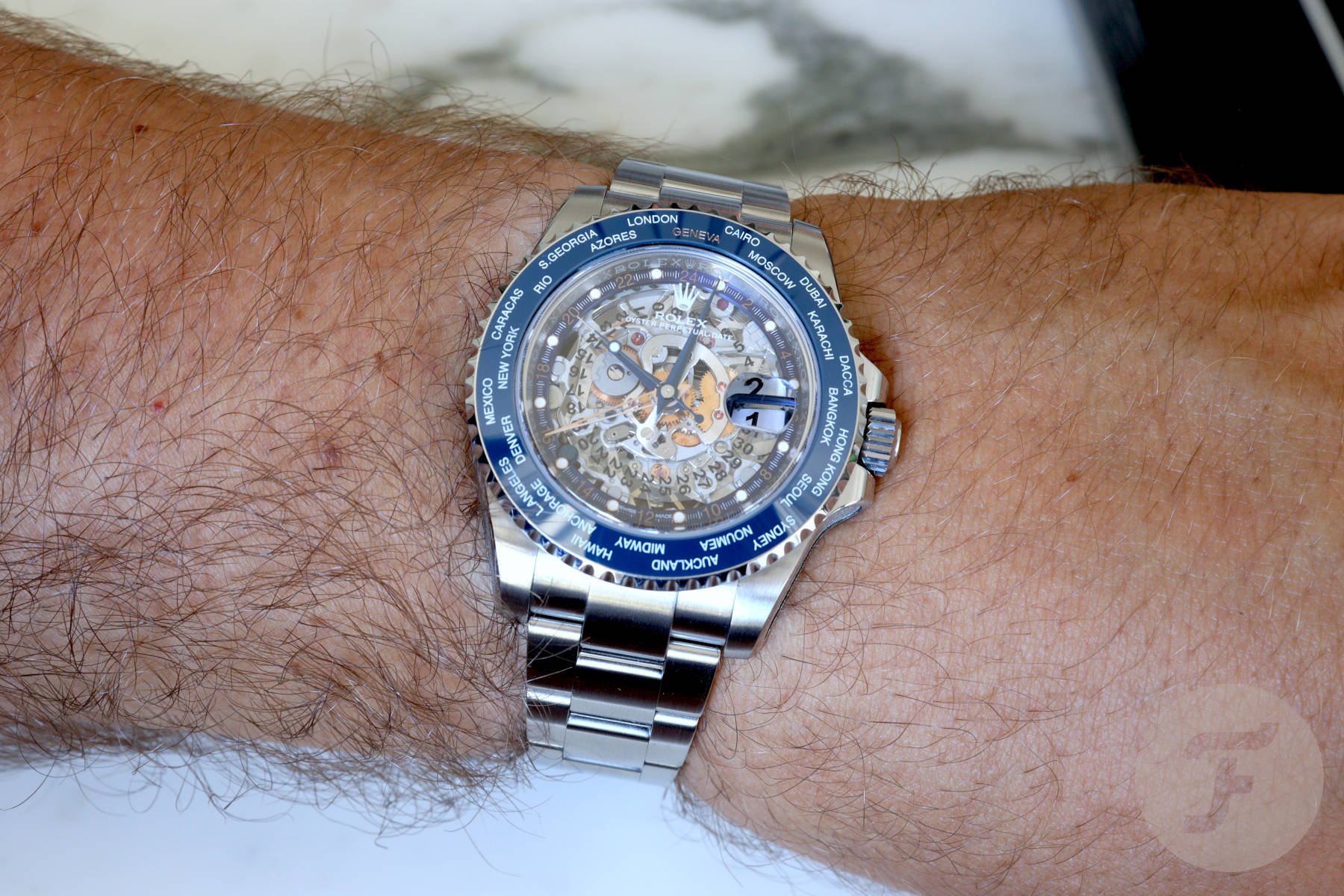 Artisans de Genève has created several fascinating projects throughout its relatively young history. While the Sea Shepherd’s Challenge remains my favorite to date, the World Traveler GMT neatly slots in to be a close second. Skeletonized watches got me into this hobby, and they hold a special place in my heart. As such, when I see a skeletonized watch executed to such a fine level as this, it’s hard for me not to be a little bit in love.

While not every single one of Artisans de Genève’s skeletonized watches fills me with the same warm, fuzzy feeling, the World Traveler GMT is one I find myself lusting after. If I had a Rolex GMT in my collection (and the spare cash to commission such a project), I don’t think I’d hesitate. Sure, I’d make a few tweaks here and there, but that’d literally be the point of such a project. Now, if only it were easy to get hold of the GMT-Master II at retail price… 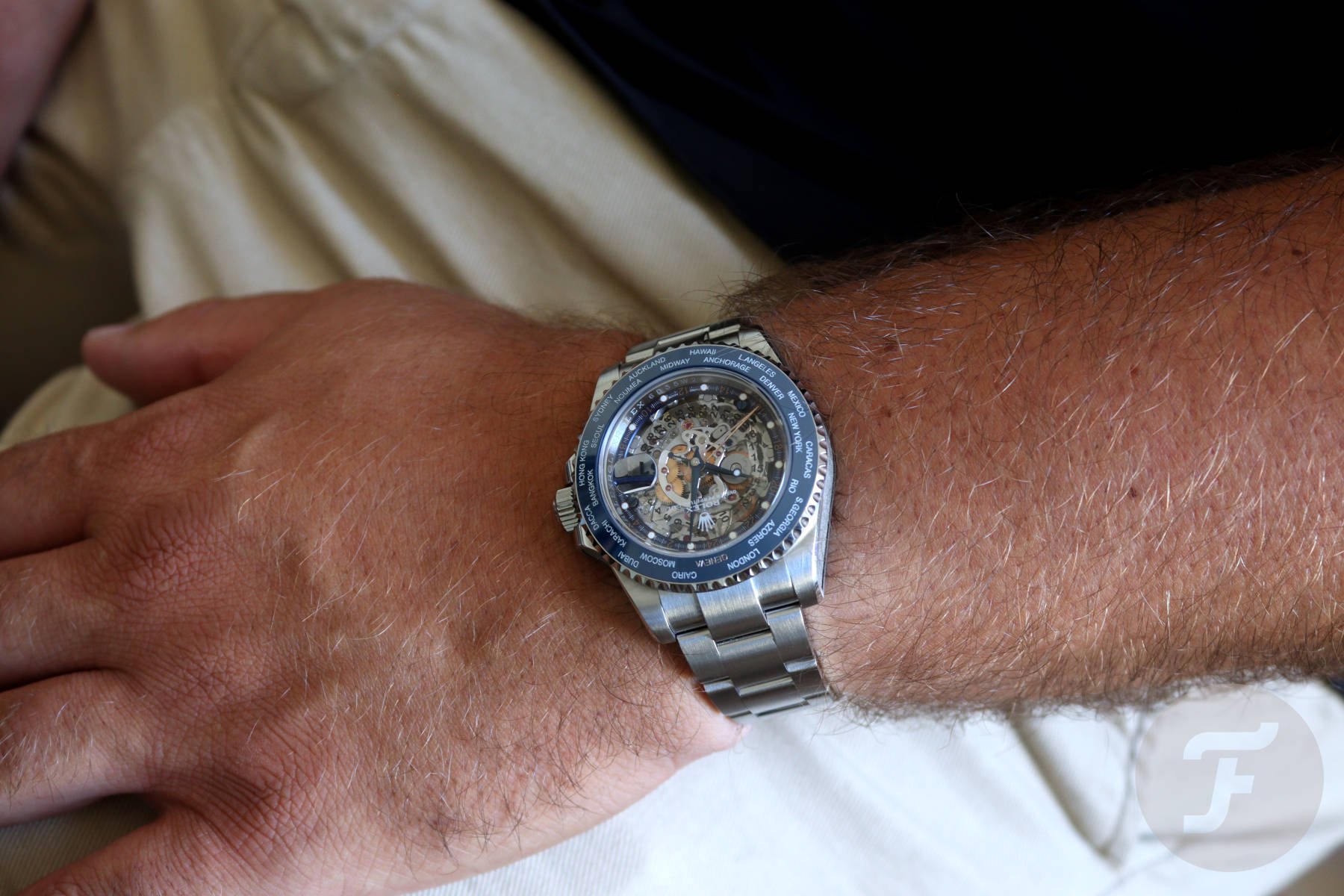 Artisans de Genève is an independent workshop. The company offers a watch-personalization service at the request of its customers within its limited capacities. It does not manufacture or sell watches. Artisans de Genève is neither affiliated with nor authorized by the manufacturers of the watches on which it works. These brands do not approve modifications or customizations made to their products by unauthorized third parties.

Artisans de Genève’s customization services are only provided for personal and private use. Artisans de Genève does not approve any other use, particularly of a commercial nature, and will invalidate the warranty.

You can find out more about Artisans de Genève on its official website.