Watches & Pencils #9 – Frankenwatch: Why we all will meet him

We’ve all heard about this “guy”. The name originates from ‘Frankenstein’ and implicitly points to some kind of evilness. How, I assume we want, do we defend ourselves against Frankenwatches? Is it even possible? Behold, I will reveal and discuss some dark places and founded a theory why we most likely will all meet him some day.

First of all, this was my first stereotype creative reaction when the term ‘Frankenwatch’ was served to my brains: 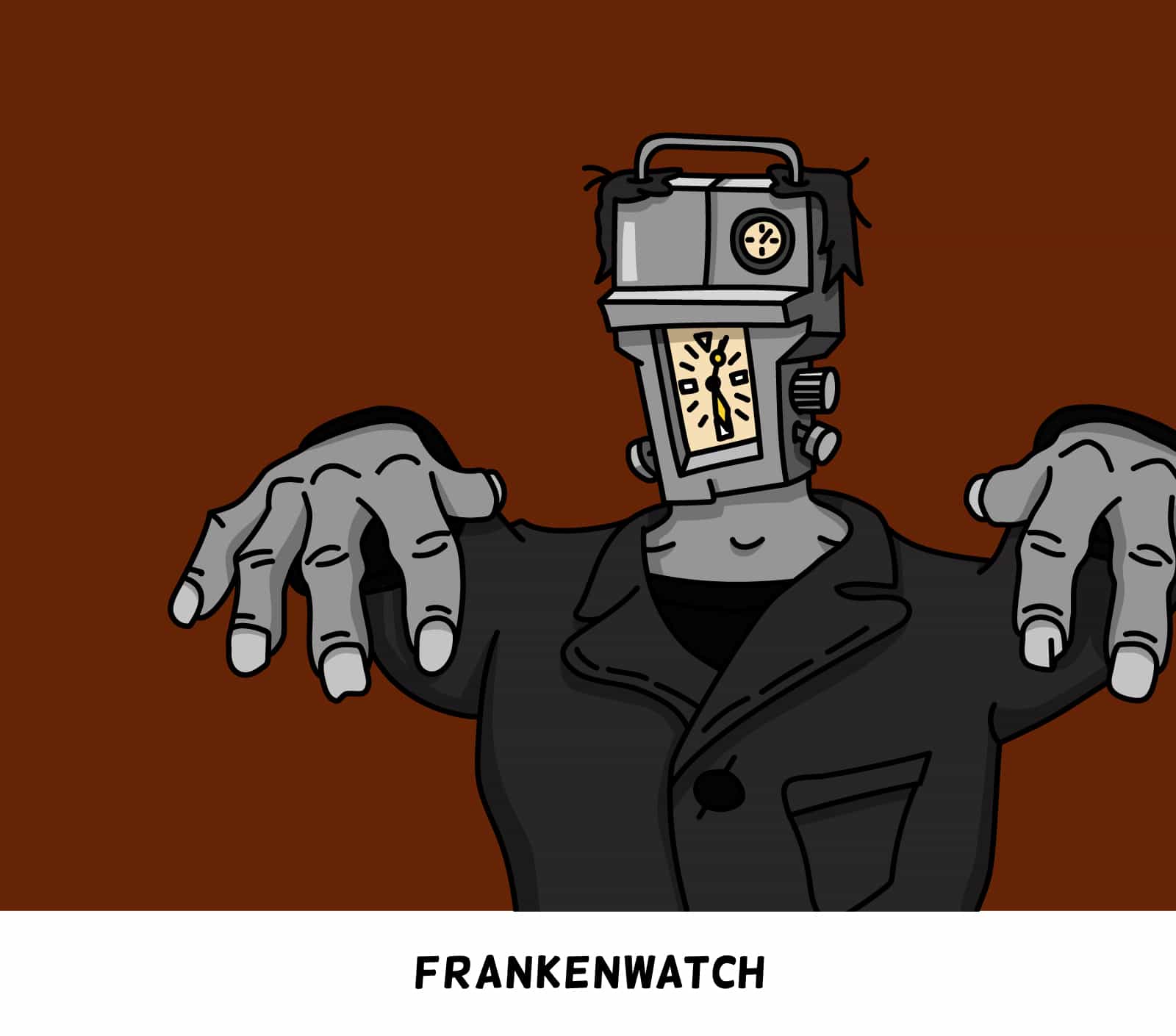 I guess everbody knows ‘Frankenstein’, but do we really know the story? Furthermore, did the most fanatic and strict collectors do before they came up with this name for watches that have been tempered with? Before we zoom into ‘Frankenwatch’, let’s briefly review the original story first and then reflect it to this WIS-spin-off:

‘Frankenstein’ is a book by author Mary Shelly and had it’s first release in 1818. It’s a macabre gothic novel. Although everybody thinks that ‘Frankenstein’ is the name of the monster, it’s actually the name of the person who ‘invented’ the monster. So from that perspective, the name ‘Frankenwatch’ is not quite right… The version of 1818 is about Victor Frankenstein which is found by captain Walton north up the Pole Circle. On board he tells his lifestory: his studies and experiments to bring back life to all kinds of dead things. Eventually, the lifestory ends up in creating a “friend” out of a collection of dead body parts from many origins. His intention was to create a nice and perfect social human being, but we all know that the result wasn’t that stunning. Despite the result (the monster even laughed at him), he had good intentions, and that introduces a nice perspective to interpreted the term ‘Frankenwatch’ (I will refer to this later on). After this happened, Frankenstein abandoned his creation and all kinds of disasters happen with Dr. Frankenstein and his family. As a reaction Frankenstein decided to escape the misery by going into the mountains. There he meets his creation again. The monster wished a woman, but after being halfway Frankenstein doubts and kills the creature. The monster reacts by a killing, but thereafter feels sorry. Several other people/relatives of Frankenstein die, and then the scene enters which we all know: Frankenstein hunts down his creation accompanied with several other mad people/farmers, until they reach the North pole. From there the story continues where it began. Frankenstein dies on board and the monster enters the ship, excuses and promise he will commit suicide. End of story.

Although some of you might know the story above, most of our image of ‘Frankenstein’ has been colored, morphed and changed through time and movies (especially ‘Frankenstein’ from 1931 with Boris Karloff as the monster). As always the movies introduced several elements to enforce the drama and action. Thus, most of our image is formed by the movies rather then the old book.

Now, after this huge – but not directly watch related – necessary introduction let’s head back to watches. For about 2 weeks I’ve been researching the term ‘Frankenwatch’ and most of the time when this term gets mentioned it is with quite a negative tone. A lot of questions came up. The most important were:

After doing quite some research I think a general definition is almost impossible, since there are loosely definitions with slight variations and a huge gray area around it. On top of that I think it’s a dynamic term which will change throughout somebody’s entire collectors-life. Let me explain that later in some of the definitions or conditionals I’ve found. First of all, let me introduce my personal definition distilled out of all those Frankenwatch descriptions so that we got something concrete to talk about and compare with:

A watch which has been built out of parts which initially weren’t meant to meet each other in one watch by the creator/brand, regardless of the fact that they came from the same brand or time period.

Some interesting facts from other collecters which I’ve found and discuss with the above definition in mind:

The last bullet is quite interesting and could be the case on visual and movement parts. Let’s nuance this one. Imagine the genuine replacement part isn’t in stock anymore. What happens next is a less preferable option is selected. Often several options with each its own level of “evilness” are available, all bubbling down to a part where it has never been used in a watch before. An example with some random parameters.

What is acceptable for you? When would the term ‘Franken’ be triggered by you? As soon as you’re aware of those levels you can set your own boundaries. I’ll hope the example gives you a good start. Also, earlier I’ve mentioned the changing of your personal definition of ‘Frankenwatch’. Imagine yourself buying the first watch. Maybe it’s a vintage watch and the hands need to be replaced. You agree with option ‘2’. Some years later you’ve read some articles and books. You’ve spotted the same model in a nice condition, but again, the hands need to be replaced. This time you decline the option ‘2’ replacement since you now decided this action will turn the watch into a ‘Frankenwatch’. You’ve become more critic and choose to look further if a 100% NOS-part is not available.

Why we all will meet Frankenwatch someday

Based on my personal definition I’ve set up some example scenario’s to illustrate why there is a significant chance you will meet him someday: 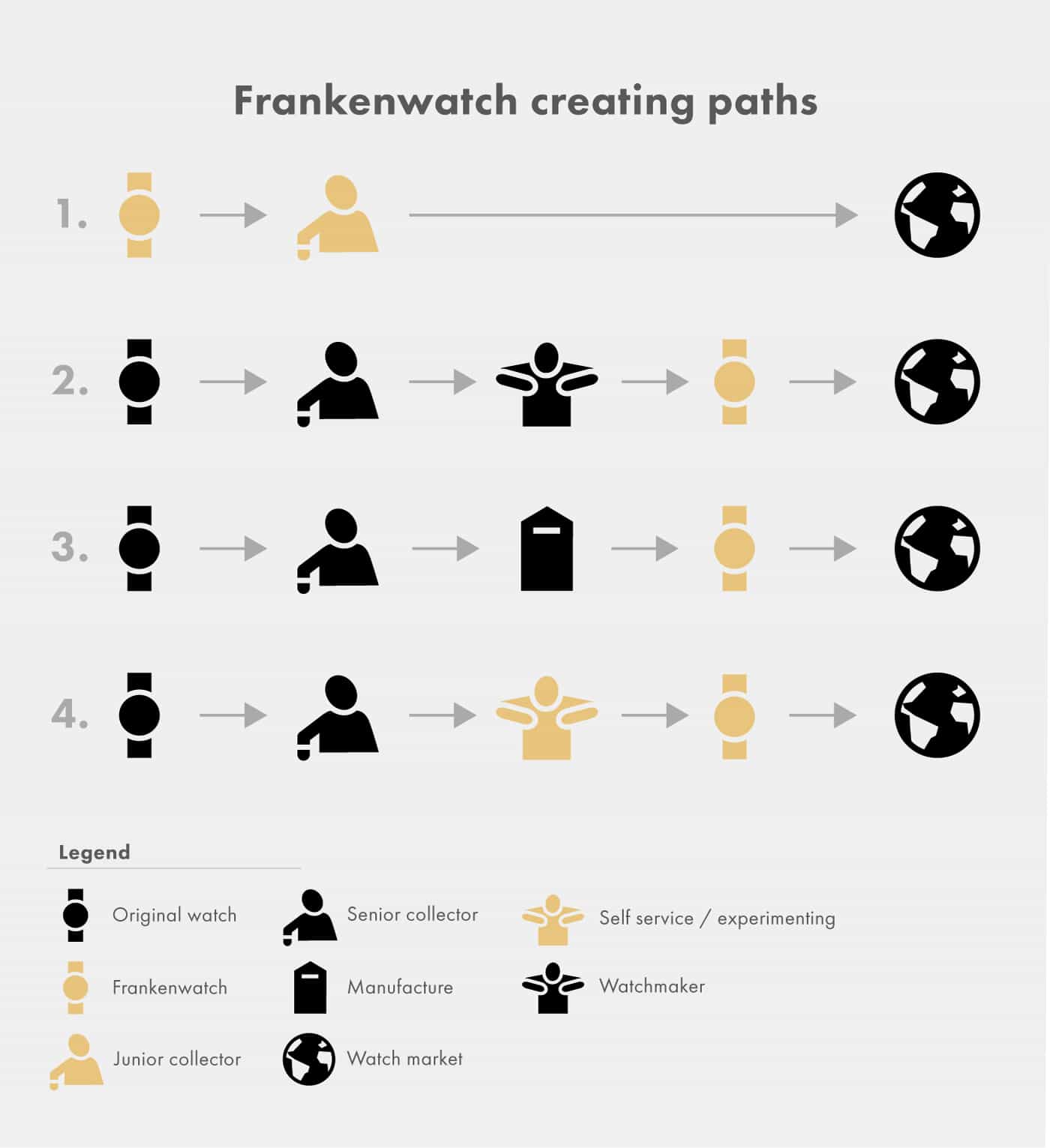 As shown there are quite a lot of possibilities for a watch turning into a Frankenwatch. Let’s briefly discuss the scenarios:

Let’s not forget that it’s the ‘evil’ us, watchmaker or brand manufacture which creates the “monster”. The watch itself isn’t evil. As seen, in many cases the owner can’t even be blamed as the creator… Although some of us may wish they could destroy Frankenwatch, the illustration above shows us that it’s almost impossible and we cannot deny that there aren’t any out there.

If we (partly) agree on the description and scenerios we cannot conclude something else then that Frankenwatch will probably be out there in eternity. By sharing tips and tricks, read old catalogs/books and forming your own description/conditionals you can partly prevent yourself from buying one but it is most likely we will all meet him someday… 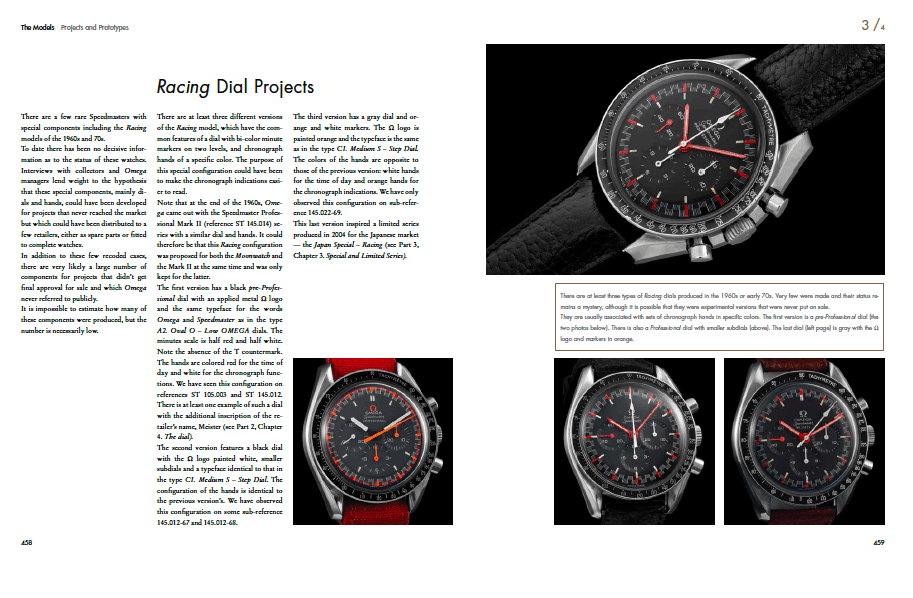