With every watch comes a story, whether personal or one of the world’s biggest events. A story connected to a watch is often the most powerful aspect of a watch. But what if the watch becomes the actual storyteller? By doing so, a watch becomes more than just a timepiece. It becomes art. Louis Moinet is a brand that has mastered the art of storytelling through its timepieces. Can you imagine our reaction when the brand announced its new Moon Race series? It won’t surprise that we were curious to find out what that would look like.

You can look at a watch as a tool as most people do. The technical wizardry that goes into creating a watch is often already an art form. It’s an art form that the watchmakers at Louis Moinet understand perfectly. But they have been pushing the boundaries of storytelling for quite some time. One of the most mindblowing series the brand creates is the Cosmic Art collection.

Within that specific collection, the brilliant Space Revolution stands out for me. That watch is simply from another planet regarding the storytelling and the horological art that goes into it. Every time I look at that piece and see two spaceships battle it out beneath a sapphire crystal dome, I am amazed by how bonkers that idea was and how stellar the execution is. Some of the Fratello team members had a chance to check it out during the Geneva Watch Days and were baffled by what they saw. 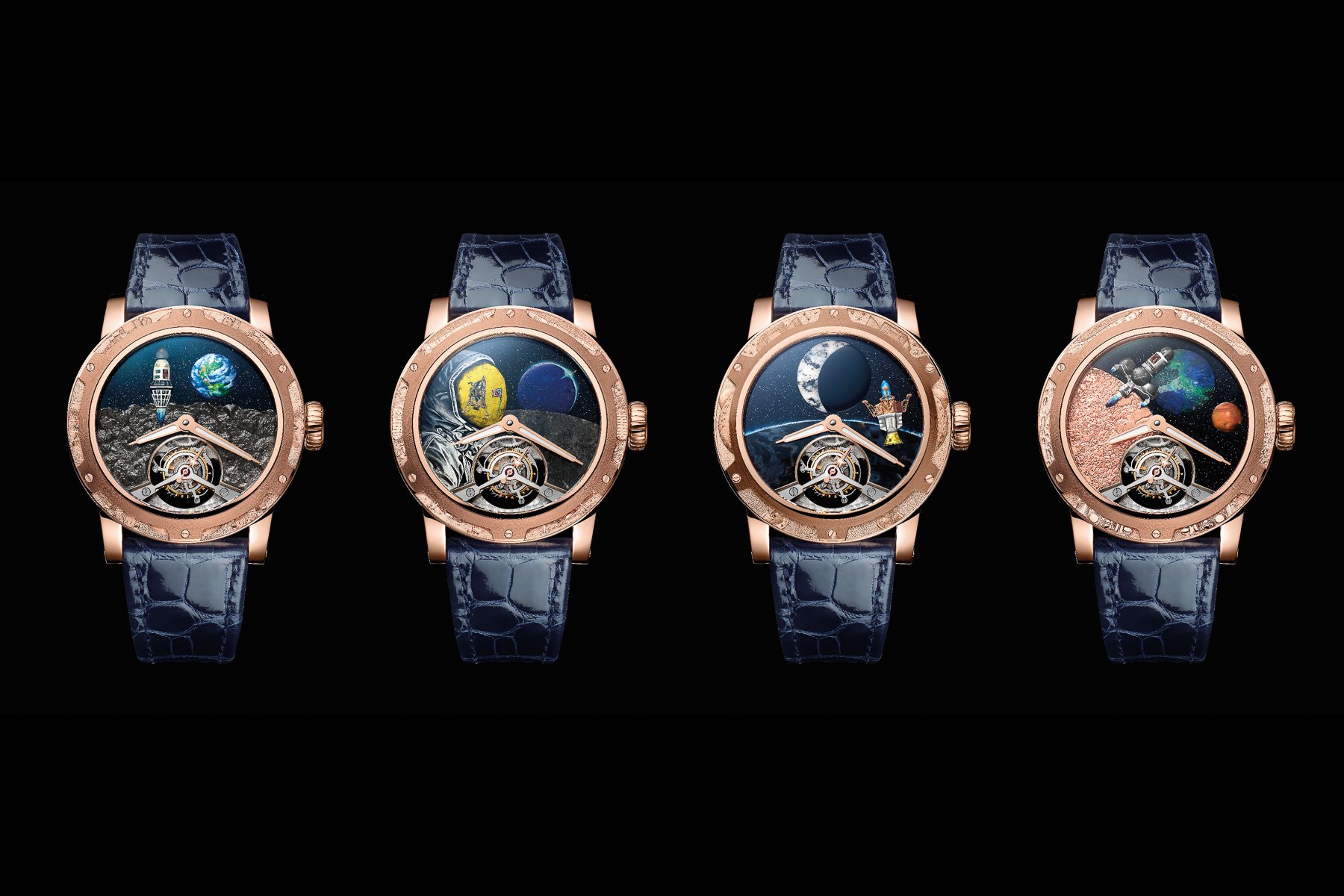 When it comes to compelling space stories, nothing beats the Space Race that led to us humans landing on the Moon in 1969. The race to the Moon is one of our history’s most amazing stories, certainly in recent times. It was the inspiration for Louis Moinet to create a series of four watches bringing that unique story to life. The four timepieces depict the four key episodes in the conquest of the Moon.

Four timepieces depict the four key episodes in the conquest of the Moon. 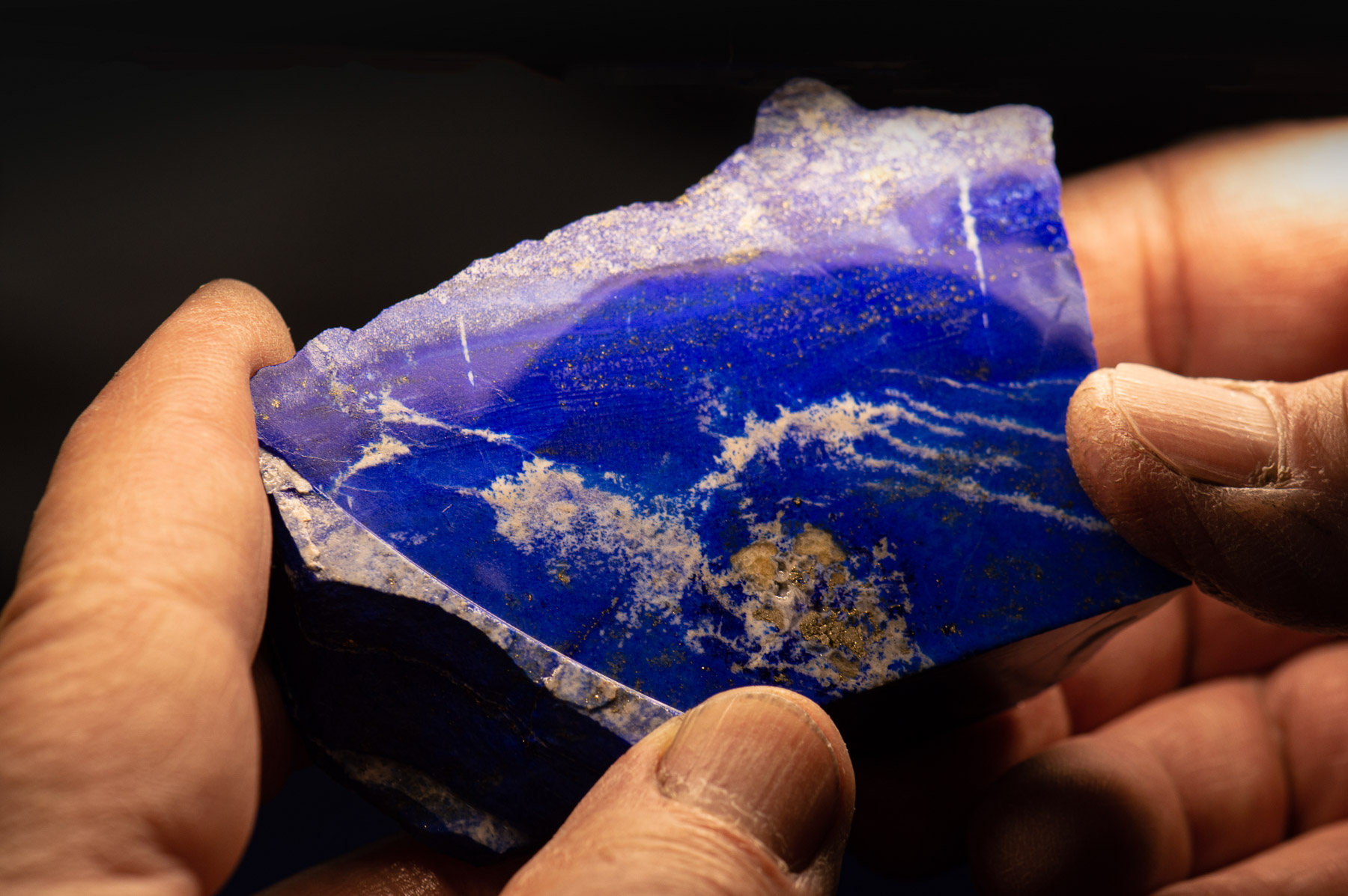 To create these remarkable timepieces, Louis Moinet combines the finest craftsmanship with the most amazing materials. The materials range from lunar meteorite to the most spectacular natural stones. On top of that, the brand got a hold of authentic fragments of four spacecrafts that were part of these stories that shaped history. These fragments were integrated into the creation of each of the four pieces. This is proper mind-blowing stuff.

The canvas for these remarkable stories are four identical rose gold watches. They feature a 47mm round case with a blue alligator strap with a rose gold folding clasp. The Louis Moinet Caliber LM35 powers all four watches. It’s a high–precision tourbillon movement that has been awarded First Prize in the International Chronometry Competition. It’s a manually wound movement that operates at a frequency of 21,600vph. The movement has 19 jewels, a power reserve of 72 hours, and shows hours, minutes, and seconds. 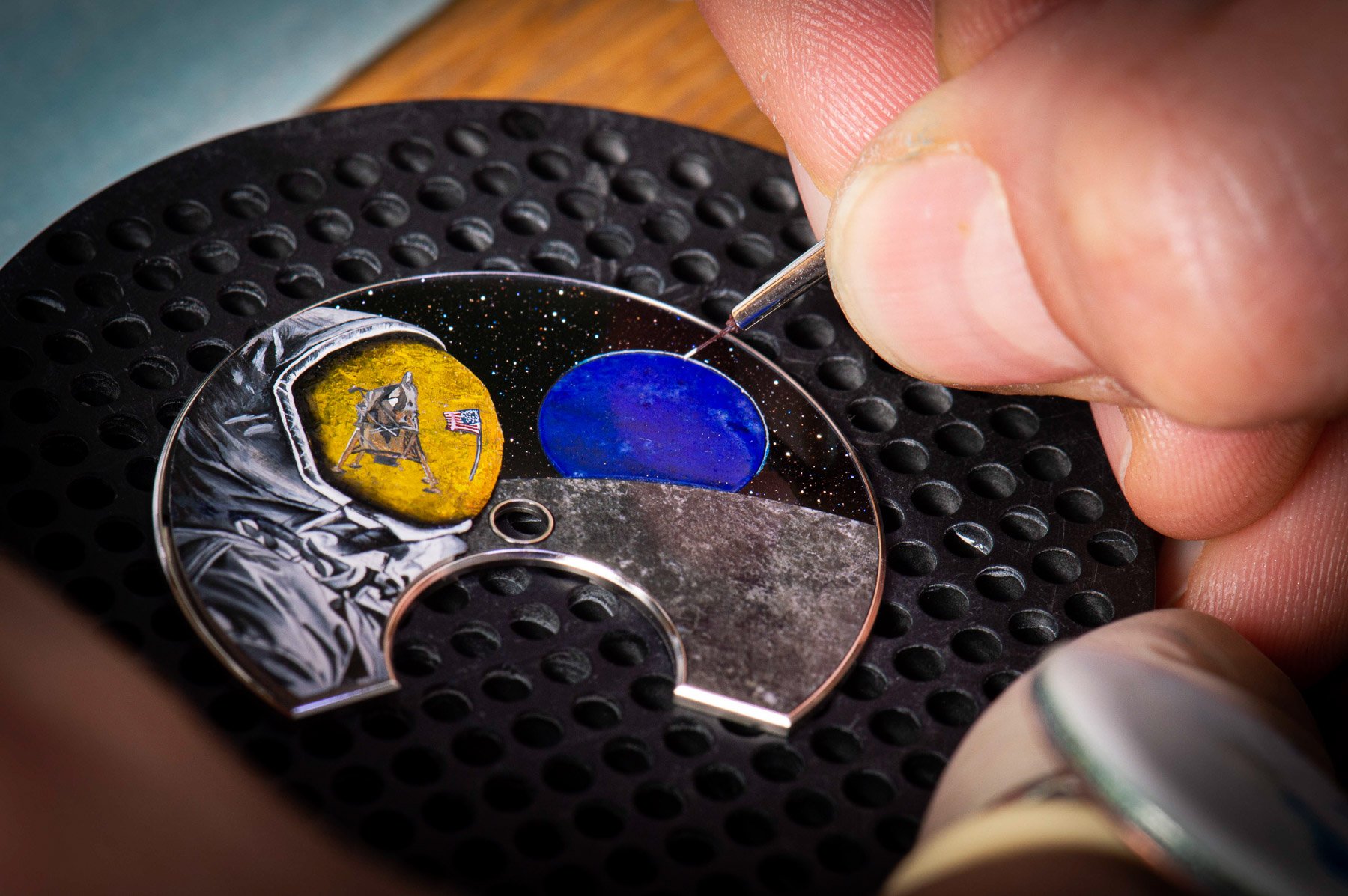 The unique art of storytelling

If the movement wasn’t impressive already, the level of craftsmanship that went into telling the four stories is stunning. Becaus we are not just talking about creating a unique dial for each of these timepieces. As you can see in the pictures, the team at Louis Moinet also used the rose gold case to tell part of the story. As a result, the entire timepiece tells a glorious story that you can keep looking at for hours on end.

Having said that, the most amazing feature, in my opinion, is the integration of pieces of the spaceships. Each of them has traveled more than a million kilometers in interplanetary space before becoming part of these unique timepieces. That is a detail that makes this box set a spectacular collectors’ item. So let’s find out more about the four individual pieces in the box set. 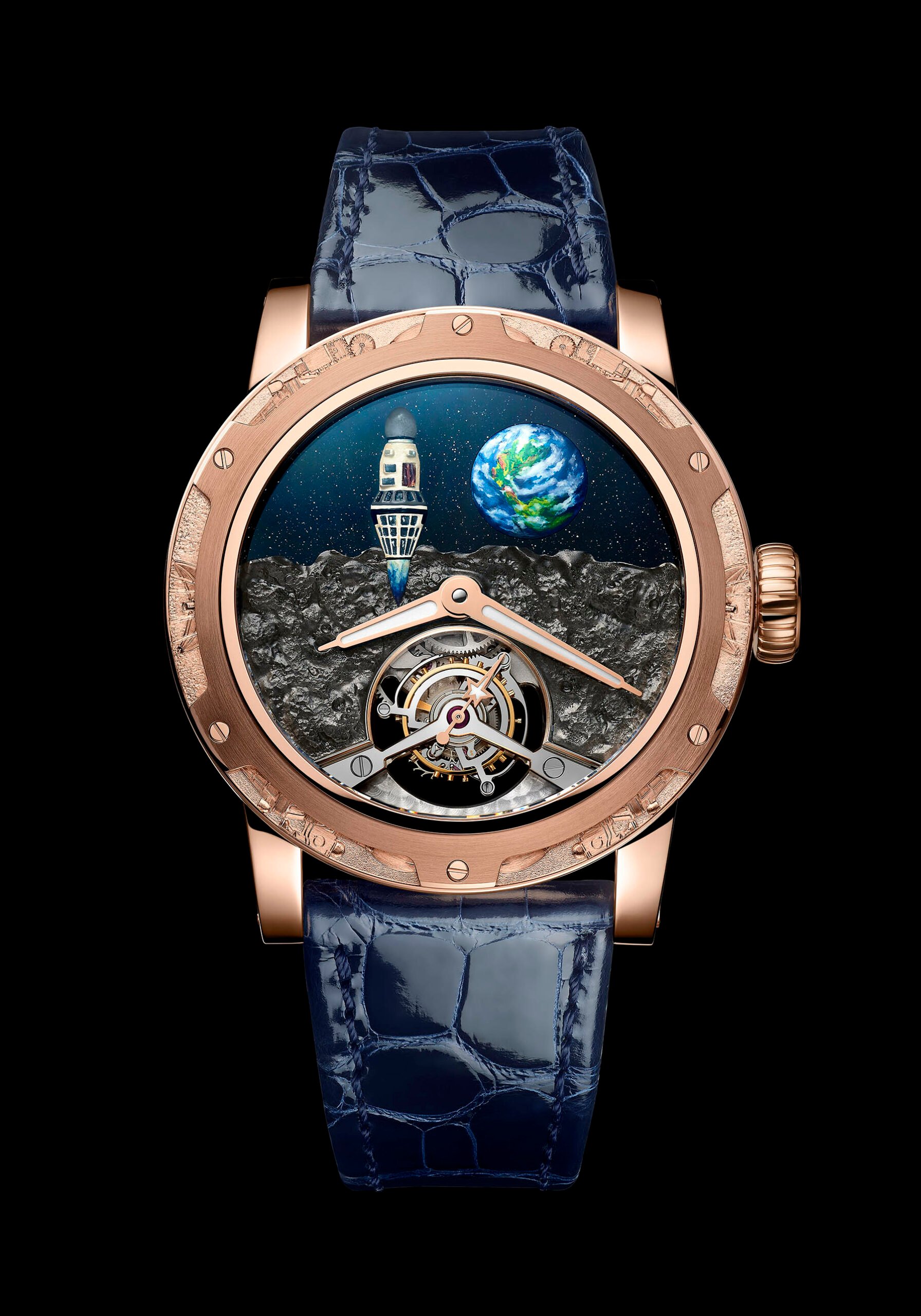 Louis Moinet First On The Moon

The First On The Moon piece tells the story of the Soviet Luna 9 space probe that made the first successful lunar soft landing in 1966. It was launched on January 31st, 1966, and landed in the Ocean of Storms (Oceanus Procellarum) on February 3rd, 1966, giving the world the first panoramic images of the lunar surface.

It includes a piece of woven fiber from the Luna 24.

To bring this story to life, the dial tells the story of the landing of the Luna 9. The spacecraft is hand-engraved and then entirely painted. It includes a piece of woven fiber from the Luna 24. This piece made the journey from the Earth to the Moon and back aboard Luna 24. The Moon is entirely hand-engraved and then blackened for the right feel of the lunar surface.  The beautiful sky is made of aventurine glass, creating an incredible sky full of sparkles representing the stars. Lastly, the Earth is hand-painted in great detail, completing the story on the dial.

But that is not where the story ends. The hand engravings on the bezel represent Luna 9, as well as the lunar landing capsule. The first images of the Moon were taken by this capsule and sent back to Earth via its antennae. 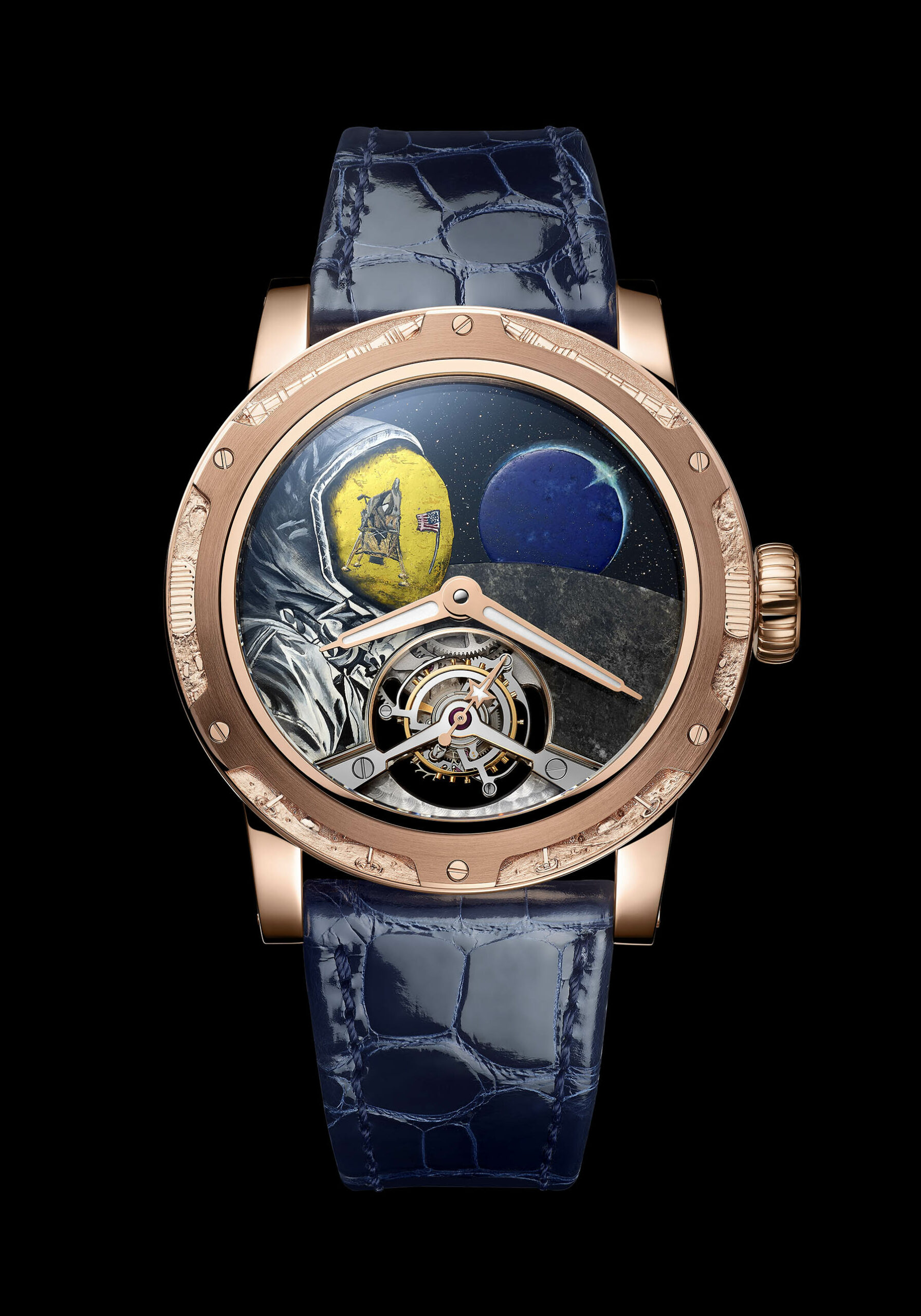 Louis Moinet Man On The Moon

Man On The Moon is the second piece and depicts the story of the Apollo 11 mission that enabled humankind to set foot on the Moon in 1969. It’s a story we all know and love. The Saturn V rocket left the Kennedy Space Center on July 16th, 1969, and the crew landed on the Moon on July 21st, 1969.

On the dial, you will find a remarkable depiction of the moment that Neil Armstrong walked on the moon. His astronaut’s suit is hand-engraved and colored using a miniature painting technique. Are you ready…the visor is an authentic fragment of the polyimide film that protected the Apollo 11 spacecraft across a wide temperature range (-250°C to 400°C). This material was used to travel from the Earth to the Moon and back. It’s rather mind-blowing stuff.

The lunar surface is actually represented by a real lunar meteorite.

To create the painting of the lunar module’s reflection, the painter trimmed his brush one hair at a time until their brush has only one hair left to create the incredible decoration. The lunar surface is actually represented by a real lunar meteorite named Dar Al Gani 400. It was found on Earth in 1998. The Earth is made of lapis lazuli and floats in the sky that is made from black aventurine.

The hand engravings on the top of the bezel represent the Saturn V rocket. Furthermore, the engravings in the center depict man’s first step on the Moon. Those at the bottom show the footpads of the Apollo lunar module as it lands. 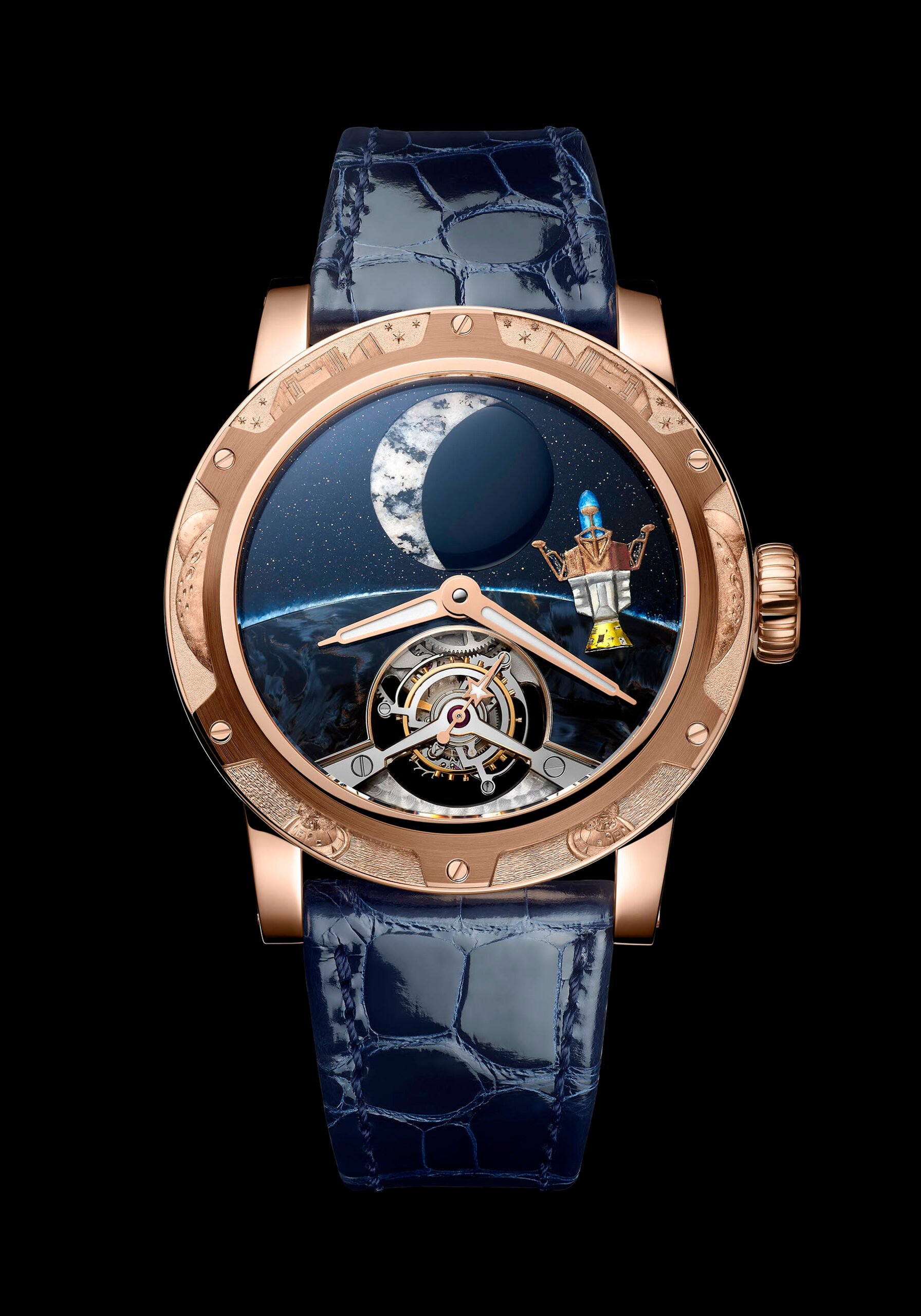 Louis Moinet Around The Moon

The third piece is Around The Moon, and it tells the famous story of the Apollo 13 mission’s return journey that required going around the Moon before returning to Earth in 1970. The Apollo 13 astronauts took off from Kennedy Space Center on April 11th, 1970, and returned home safely after an incredible adventure on April 17th, 1970

The spacecraft on the dial is hand-engraved and then enhanced with a polyimide film fragment from the Apollo 13 spacecraft. It protected it on its return journey, particularly during its atmospheric re-entry. This material traveled from the Earth to the orbit of the Moon and then back to Earth. As we see the spacecraft headed for Earth, the face of the Moon is made from black Onyx set against granite from the Bernese Oberland.

The bottom shows the command module that landed in the Pacific Ocean.

The Earth is depicted by blue Pietersite from Namibia with a great shimmering effect. For the sky, the watchmakers once again used aventurine that was sourced and cut by the Haas family. The family has been a partner for Louis Moinet in the field of exceptional stones.

The hand engravings on the top of the bezel represent the Odyssey service and command module. In the center, we find a view of the Moon that shows a distant Earth. Finally, the engraving on the bottom shows the command module that landed in the Pacific Ocean. 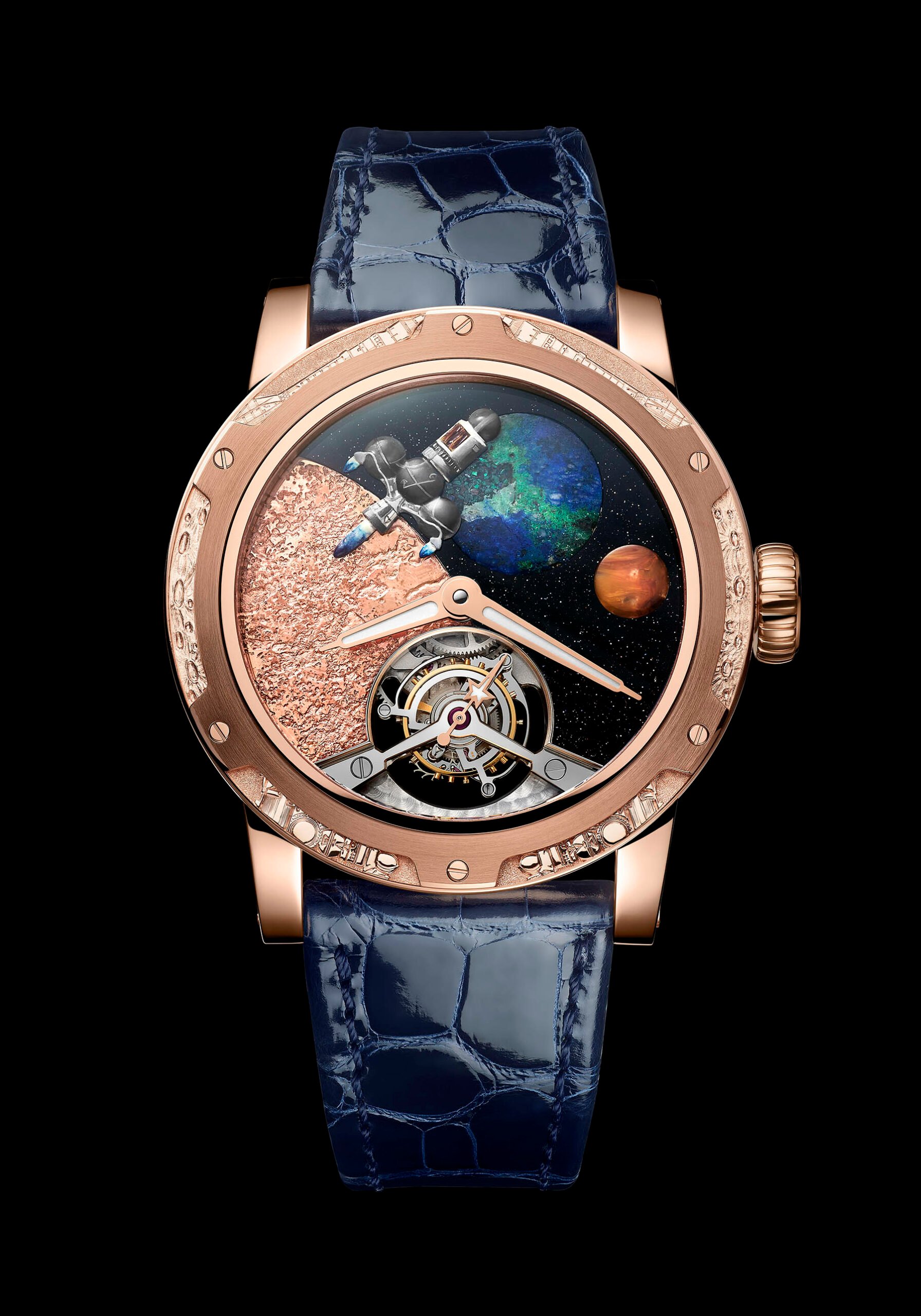 Louis Moinet Last On The Moon

The last of the four watches is Last On The Moon, and it tells the story of the Soviet Luna 24. Luna 24 was the last probe of the Luna program to land on the Moon in 1976. It brought back 170 grams of lunar soil samples that, after testing, proved the existence of water on the lunar surface. The Luna 24 was launched on August 9th, 1976, landed on the Moon 9 days later before returning to Earth on August 22nd, 1976

Luna 24 is depicted on the dial returning to Earth. The spacecraft is hand-engraved and features a piece of resin-coated braided fiber from the actual Luna 24 module. And needless to say, this piece of material also traveled through space from Earth to the Moon and back. The Moon is made of copper with special etching to highlight its craters.

The Earth is made from an exceptional mineral called azurite-malachite.

The Earth is made from an exceptional mineral called azurite-malachite. It is accompanied on the dial by a yellow Pietersite sun, and both are placed once again on an aventurine background that represents the sky. The hand engravings on top of the bezel represent the Proton rocket. It was used on many Soviet space missions, including Luna 24. The center engravings represent the lunar surface. Lastly, the base of the bezel features the design of the Luna 24 space probe. 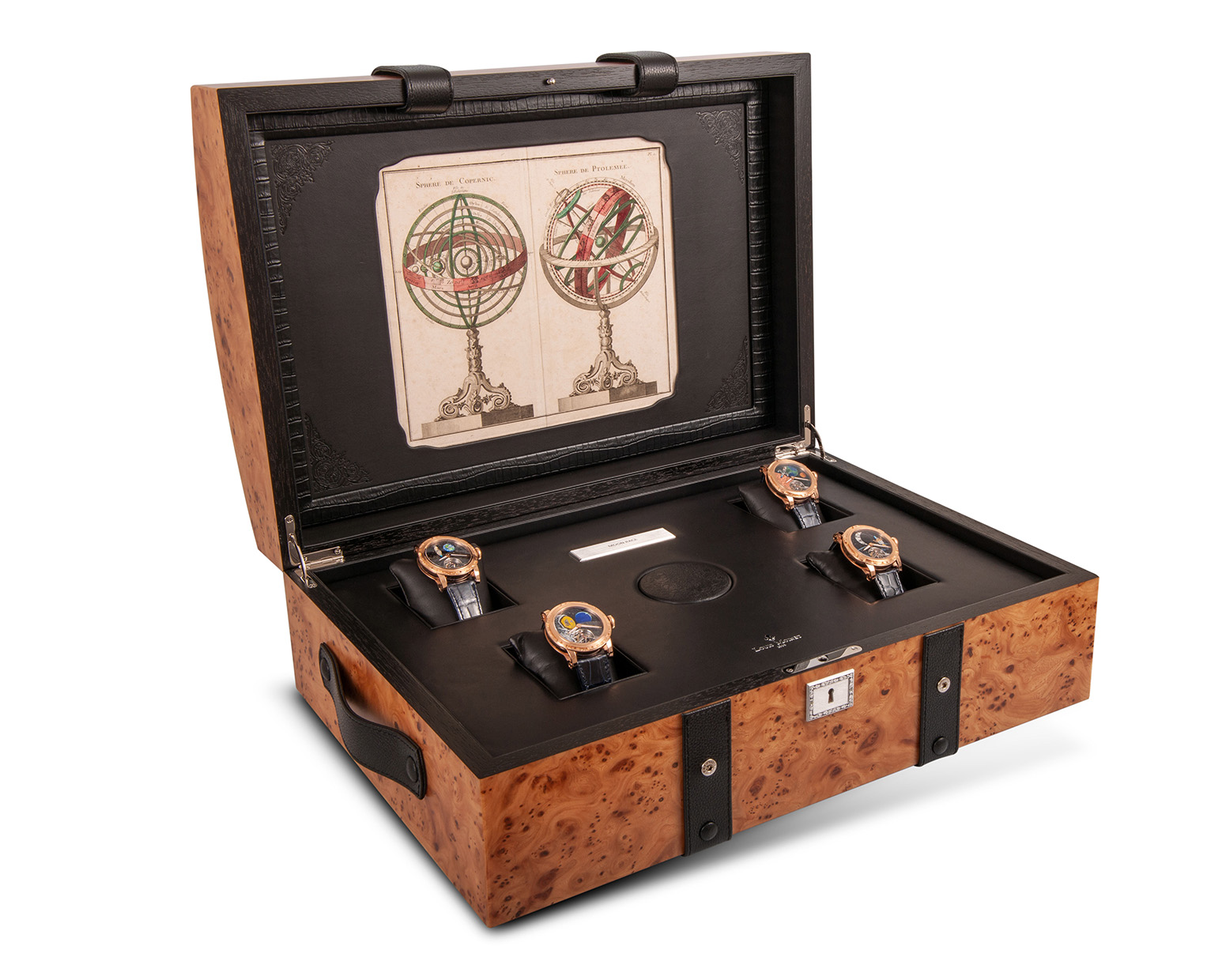 The four watches come as a one-of-a-kind box-set in a special natural elm burr wooden box. On the outside, the box is adorned with a black-lacquered Fleur de Lys pattern. Two cognac-colored leather straps top the domed lid. The inside is made of black leather. The inside of the cover features an 18th-century treasure: the drawings of the Sphere of Copernicus & Sphere of Ptolemy by Buy de Mornas. The printing is enhanced with watercolors, making it another unique feature of an already impressive box-set.

As mentioned, this very special Moon Race set comes as a one-of-a-kind box-set. While it seems almost unnecessary to talk about money when it comes to this kind of art, it is worth mentioning the box-set is available for CHF 1,250,000. That is an incredible amount of money for an incredible box-set of four watches. The lucky buyer will, however, buy something completely unique. 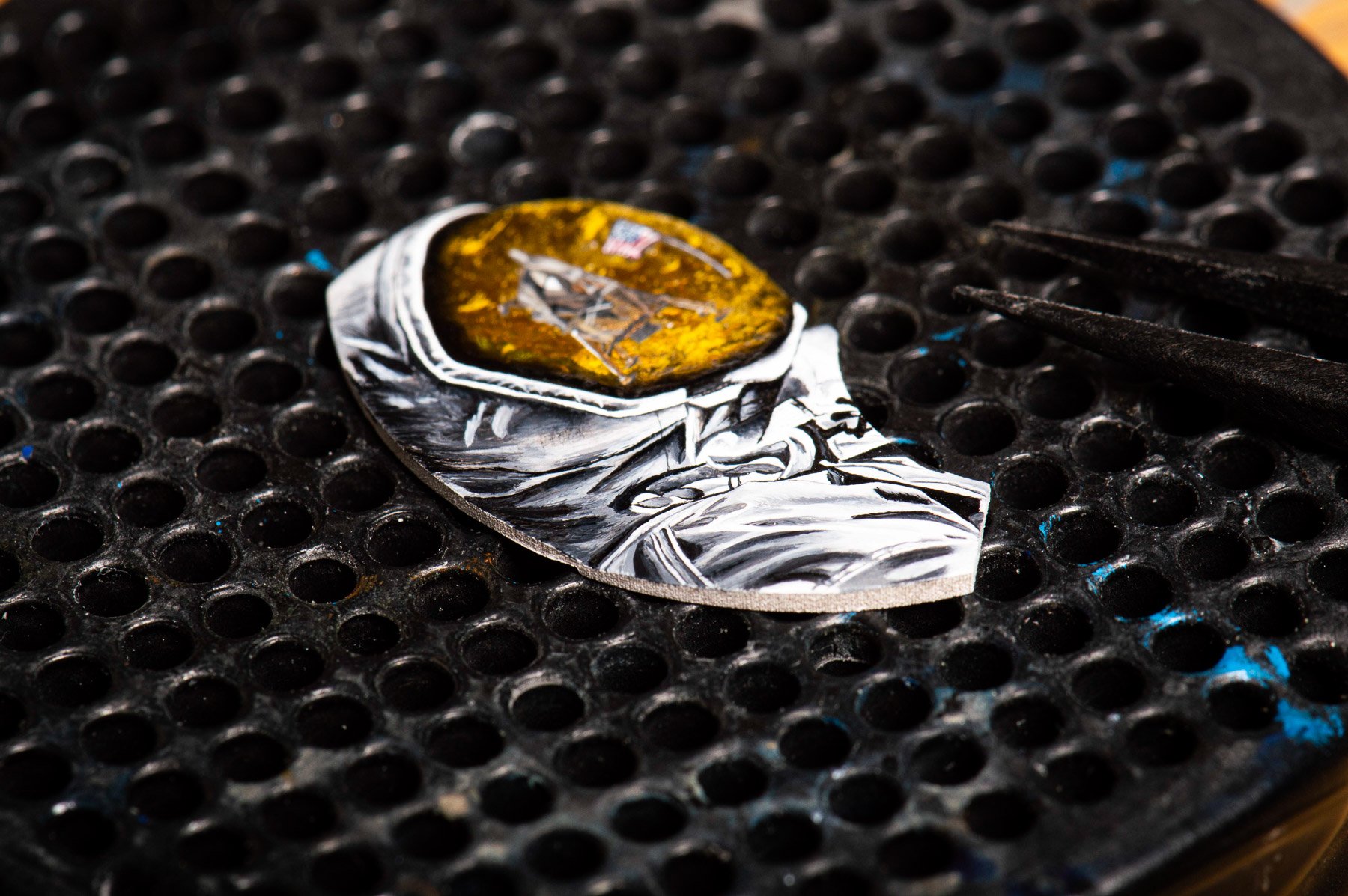 I have to give it to Louis Moinet for once again creating something extraordinary. This set of four exquisite timepieces show that incredible craftsmanship and exclusive materials can turn watches into the most amazing storytellers. The level of detail that goes into each timepiece is stunning. While it’s all about the story of all four watches, of course, it’s good to remind ourselves that these watches are technical masterpieces. You tend to forget that with these amazing stories.

But the stories are without a doubt the heroes of this box-set. By choosing to tell the story of the Space Race, Louis Moinet chose a story that is close to our Fratello hearts. And I have nothing but the greatest respect for this kind of dedication and craftsmanship to tell stories through watches. In my opinion, Louis Moinet is the best in the business when it comes to telling these amazing stories.