Why Does Everyone Suddenly Want A Cartier Pebble?

The world of watches never ceases to surprise me. As far as Cartier is concerned, I can’t recall a watch that caused as much of a buzz around its launch as the Pebble did. Even the 2019 rerelease of the Cartier (London) Crash watch caused less noise on social media than the Pebble. And that Crash truly gave me and lots of other collectors sleepless nights, let me tell you.

What is a Pebble watch? Why is Cartier now releasing the Pebble, and why is there so much interest in it? How interesting is the Pebble in comparison to the Crash, and what is the future of the model?

Let yourself be carried away and updated with the details of this exorbitant watch. It is one that stole my heart, but only after I finally saw it at the Rare Watches Exhibition in Geneva earlier this month. The press pictures didn’t do the watch justice because the Pebble is not easy to photograph well. 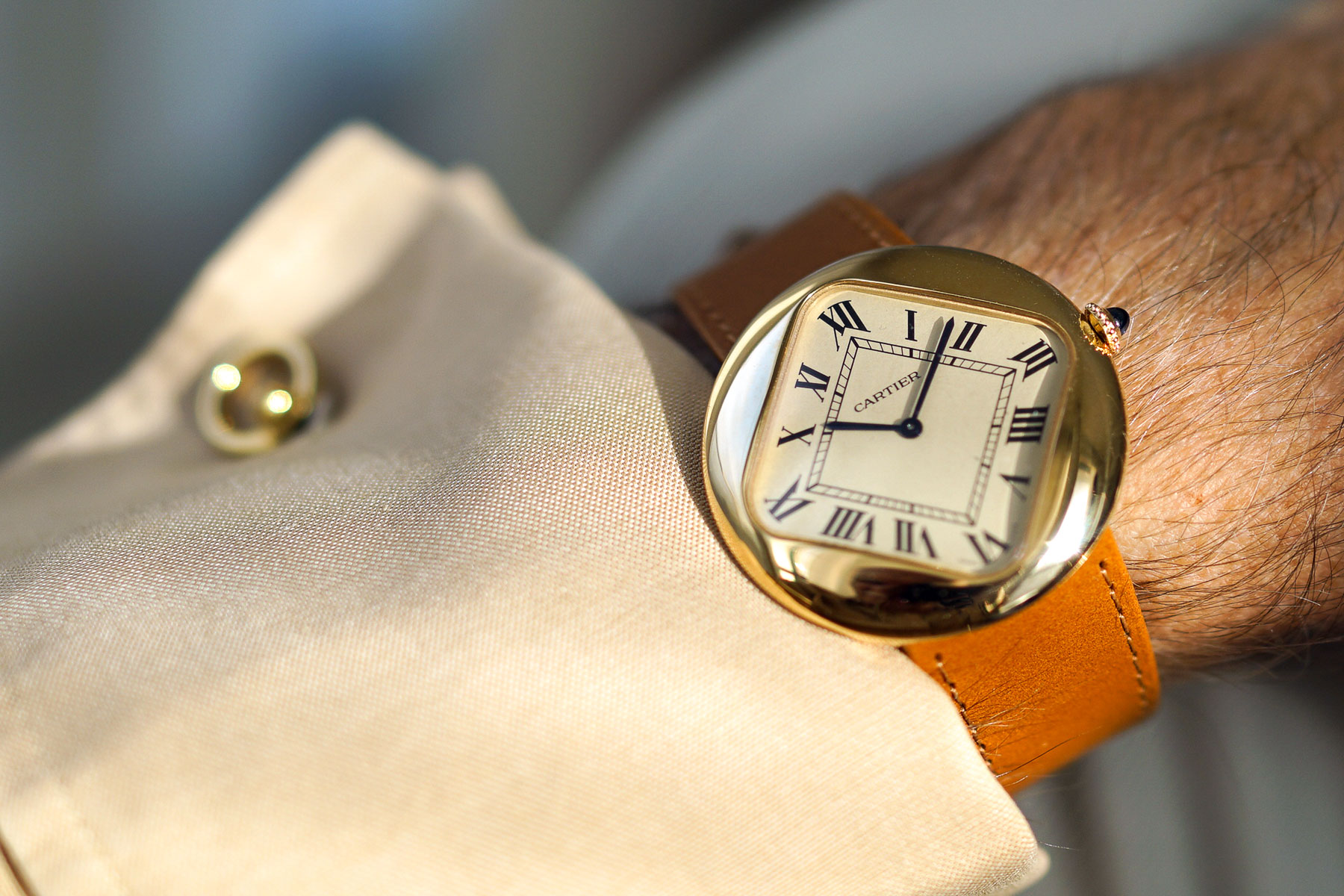 What is a Pebble watch?

Much has been written about this timepiece. Today, I think it is well known that the Pebble is a Cartier London design that dates back to 1972. As the story goes, the New Bond Street boutique, under Jean-Jacques Cartier’s supervision, made six pieces of the Pebble. This was a particularly low number for a new model. Since then, Cartier International — or Cartier HQ, as it’s often called — has been able to buy back three of them. These are now part of Cartier’s vintage collection of models that the brand regularly shows at exhibitions. Two of these Pebble watches are the regular size, and one of them is a smaller version.

The case is round, like so many other watches. What gives the Pebble its unmistakable look, however, is the design and positioning of the lugs and the dial. The minuscule lugs sit almost underneath the case, and the dial is a square, rotated 45 degrees. 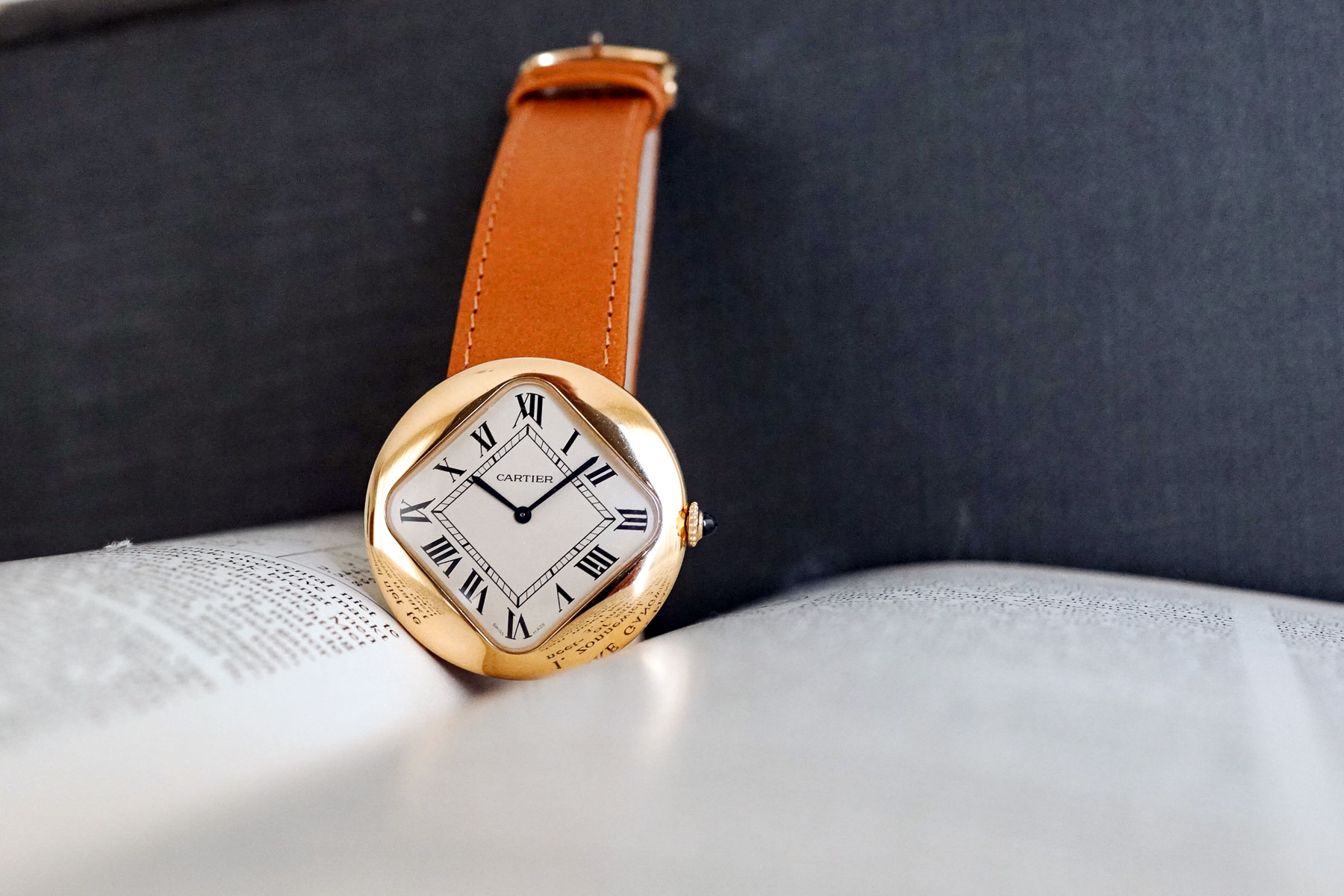 Why is Cartier now releasing the Pebble watch?

This year marks exactly 50 years since Cartier London released the Pebble. To celebrate, Cartier HQ created a limited edition of 150 pieces with an almost identical look to the vintage models and made it available for sale internationally. On this new version, the script logo gives way to the traditional Cartier logo, and the case, at 36mm, is just slightly larger than the original. The launch of these watches, however, was different than usual. Cartier is paid close attention to who was interested in this watch, and therefore, the Pebble was not available for sale to just anyone. La Maison actively tried to find the right home for these 150 Pebble watches.

This may sound strange because we have never experienced restrictions like this with Cartier. That said, Patek Philippe follows sometimes the same strategy with very special models. This may prevent the watches from popping up for sale on Chrono24 or at auctions for much higher prices just a few months later. 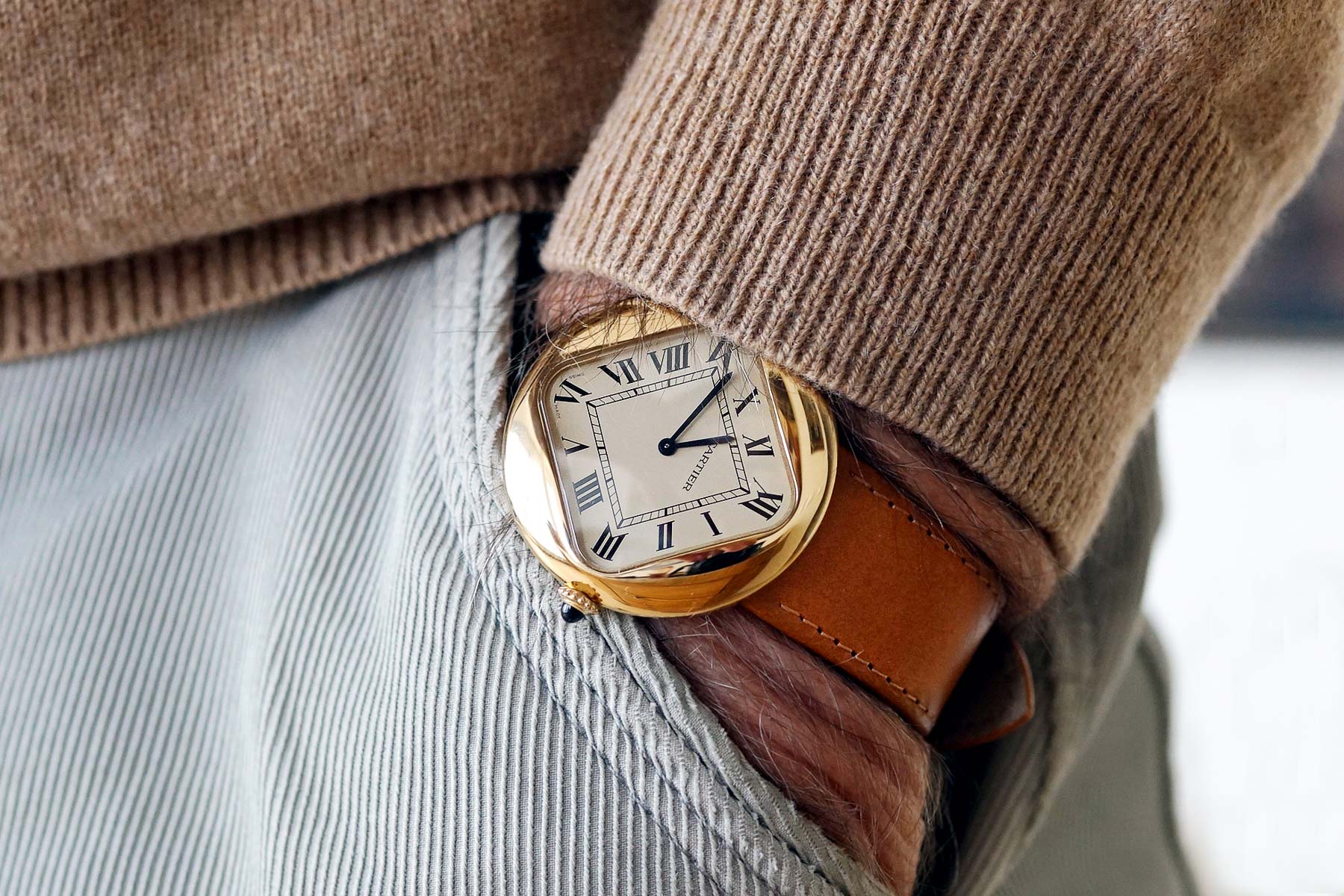 Why all the interest in the Pebble watch?

In my opinion, the Pebble watch is a beautiful and incredibly special timepiece, but I do not think that the unique shape and the thin history of the Pebble caused the gigantic hype. 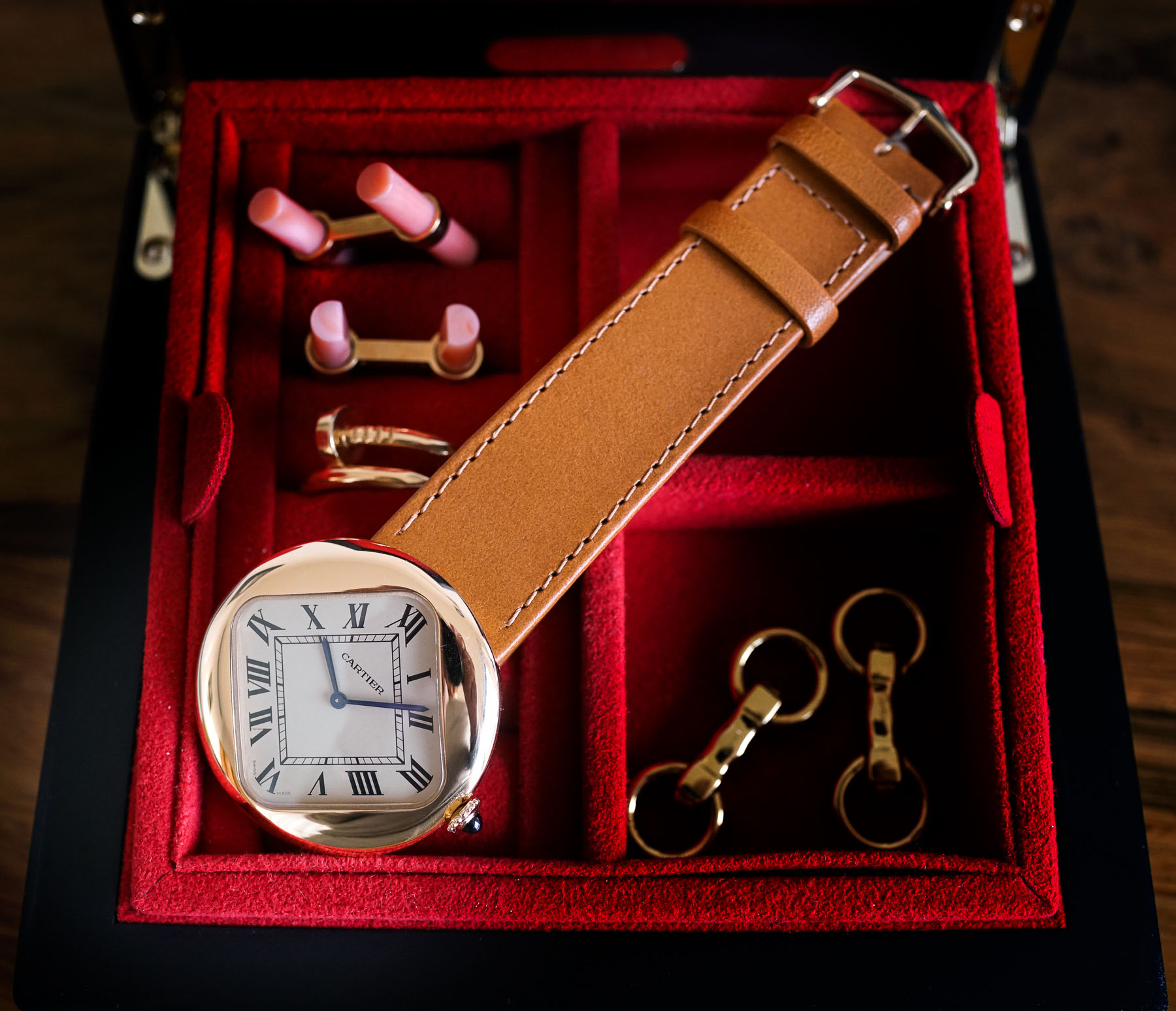 It is a watch that should naturally attract the interest of the hardcore Cartier fanatic. It should rouse the interest of one who owns already CPCP models, Cartier Privé watches, and maybe even vintage pieces. But nowadays, the watch community is also increasingly dealing with a new type of “collector”. This is the person who does not care about what a watch is or how it looks, but rather, one for whom auction results are much more important. This attitude makes a timepiece a kind of investment for people like this. More and more often, we are seeing special Cartier watches such as the Crash, the Tank Cintrée, or the Tank Asymétrique pop up in collections that largely contain the harder-to-obtain models from Rolex, Audemars Piguet, and Patek Philippe. 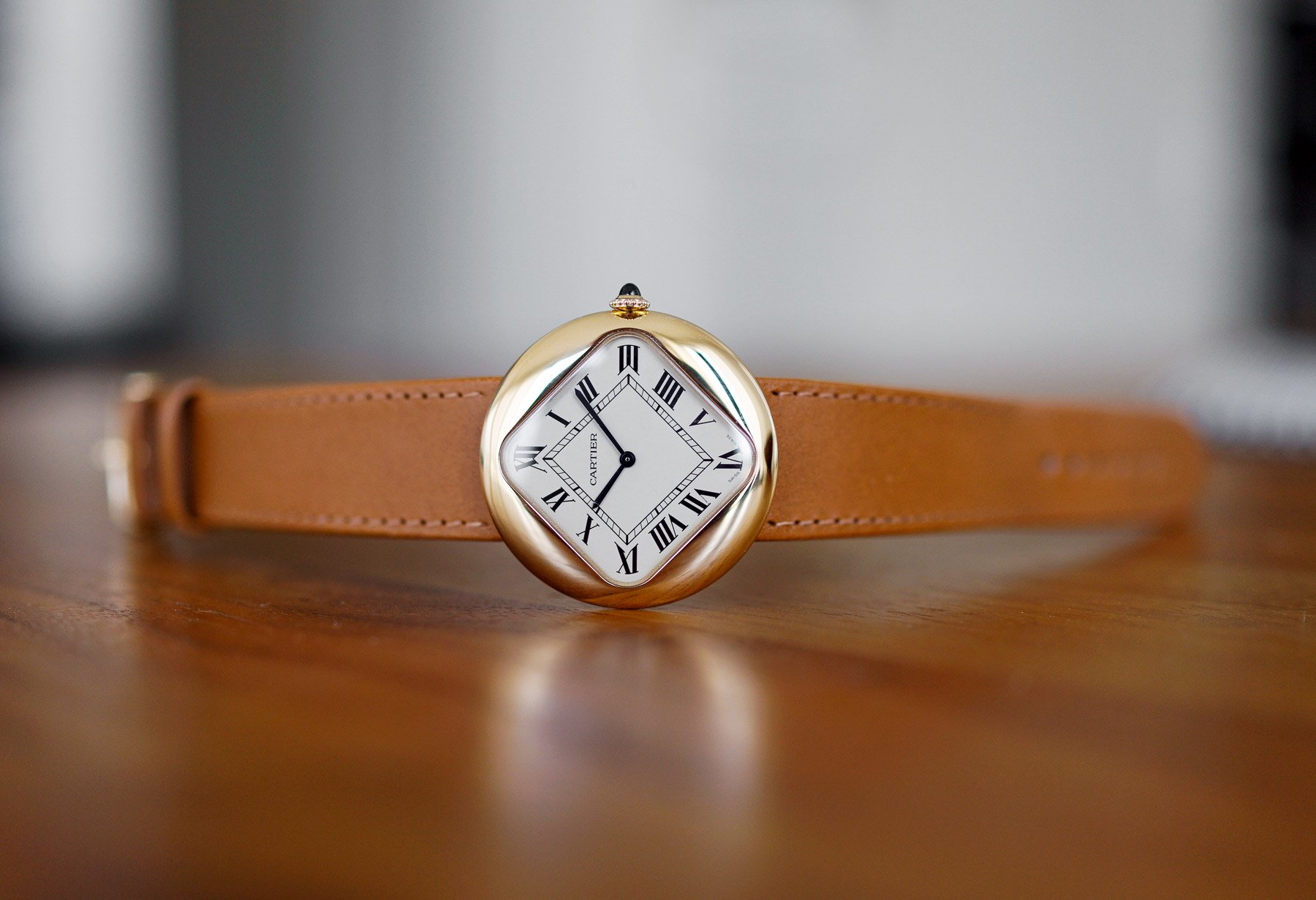 This is a sad development that does not benefit the hobby. Likewise, it does not make the Cartier community any nicer, but unfortunately, it is a sign of the times. 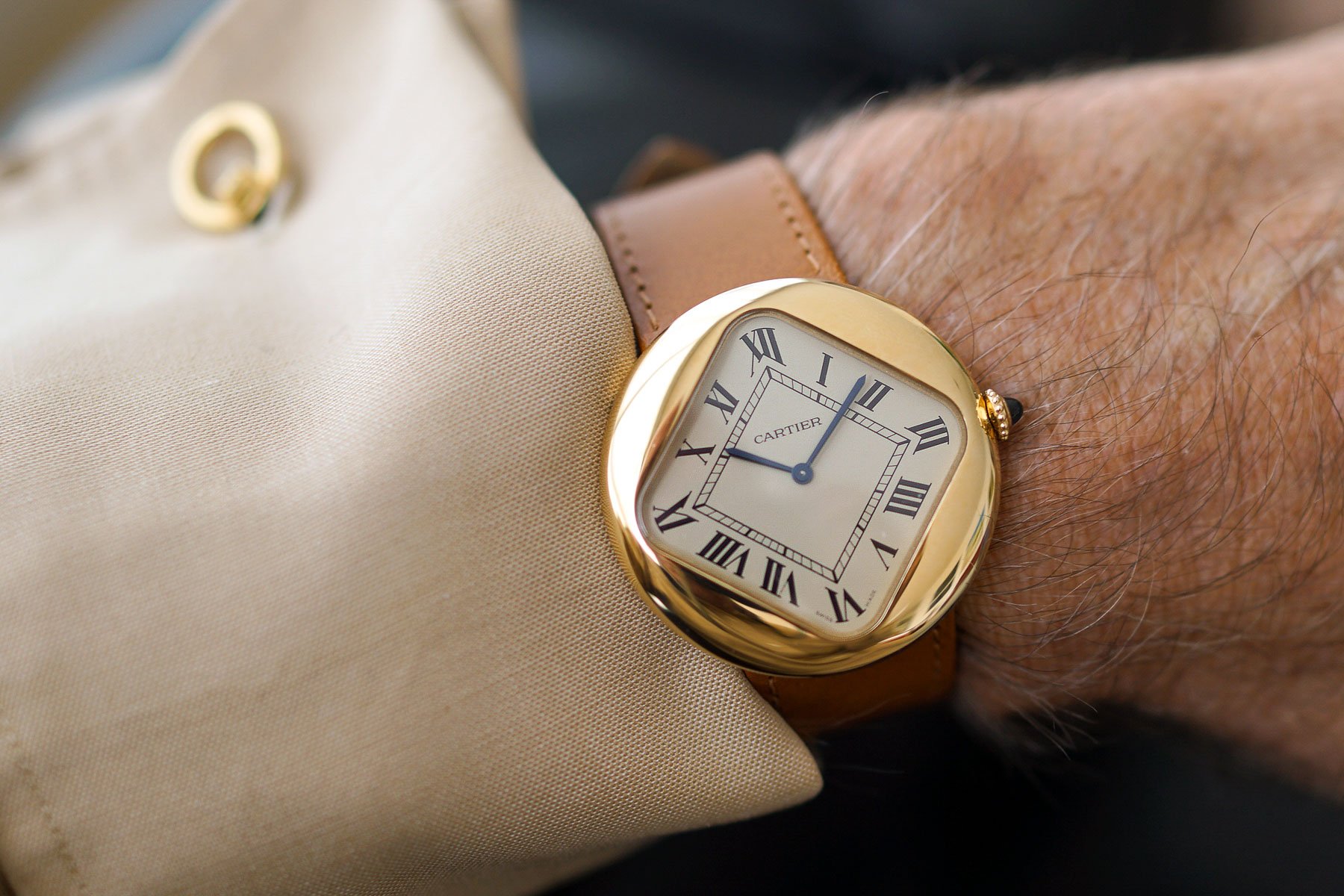 How interesting is the Pebble in comparison to the Crash?

Besides the Pebble, the Crash still garners enormous interest. For the collector who cares more about auction results, the choice between a Pebble or a Crash doesn’t matter too much. For the true Cartier fanatic/connoisseur, however, the Pebble could be more interesting. This is a watch that’s much easier for a man to wear than the Crash. I realize that anything is possible nowadays, but I don’t see a real estate manager opening a board meeting with a Crash watch on his wrist. Meanwhile, a Pebble would certainly not seem out of place. 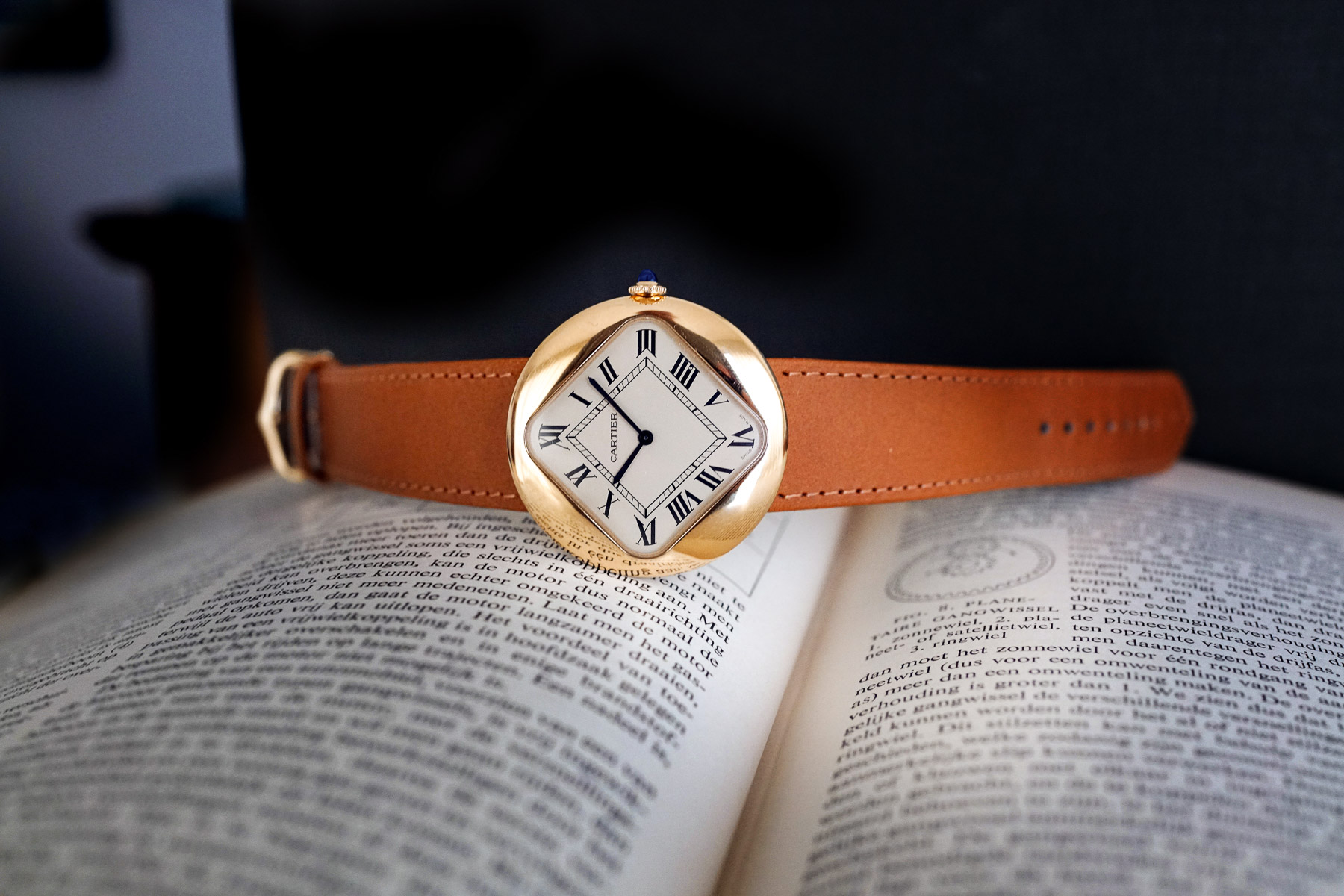 The new Pebble, of which Cartier produced 150 pieces, bears a surprising resemblance to the original 1972 model. The crystal of the new version seems less domed than the original Plexiglass of the original. Nevertheless, it’s difficult to say for sure as I didn’t hold the vintage model in my hands. The words “Swiss Made” now sit very tastefully in small print on both sides of the “VI”, and they are hardly visible to the naked eye. Also, the 36mm case of the new model looks identical in design to the vintage original but appears to be less than 1mm larger. I find the size to be perfect for my 18cm (7″) wrist, and the watch even seems slightly larger than the size indicates. 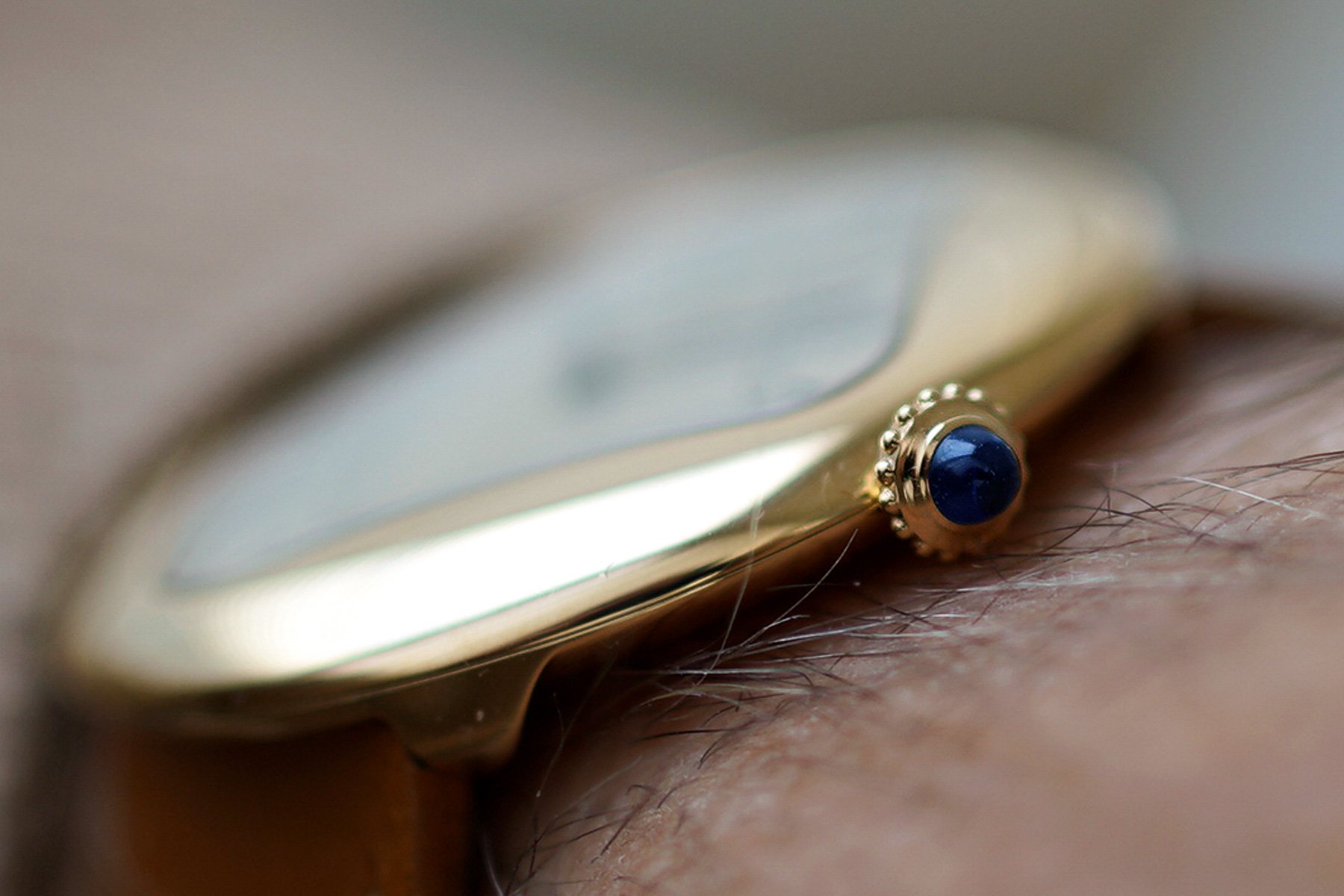 In and around the Pebble

Underneath the amazing, eggshell-like dial, we find the reliable Cartier 430 MC (Piaget 430P). This 2.1mm-slim mechanical caliber beats at 3Hz, providing a power reserve of at least 38 hours. The Pebble comes on a tan-beige calfskin strap, as it often was presented originally, and without a deployment buckle. It may be good to know that Cartier now has a new folding buckle available that fits regular straps. This eliminates the need to purchase a new leather strap if you are not a fan of the supplied pin buckle. Folding buckles have always been a “love it or hate it” thing, but I like to add them to almost any watch. I find that they increase the wearing comfort enormously, but this is also very personal. 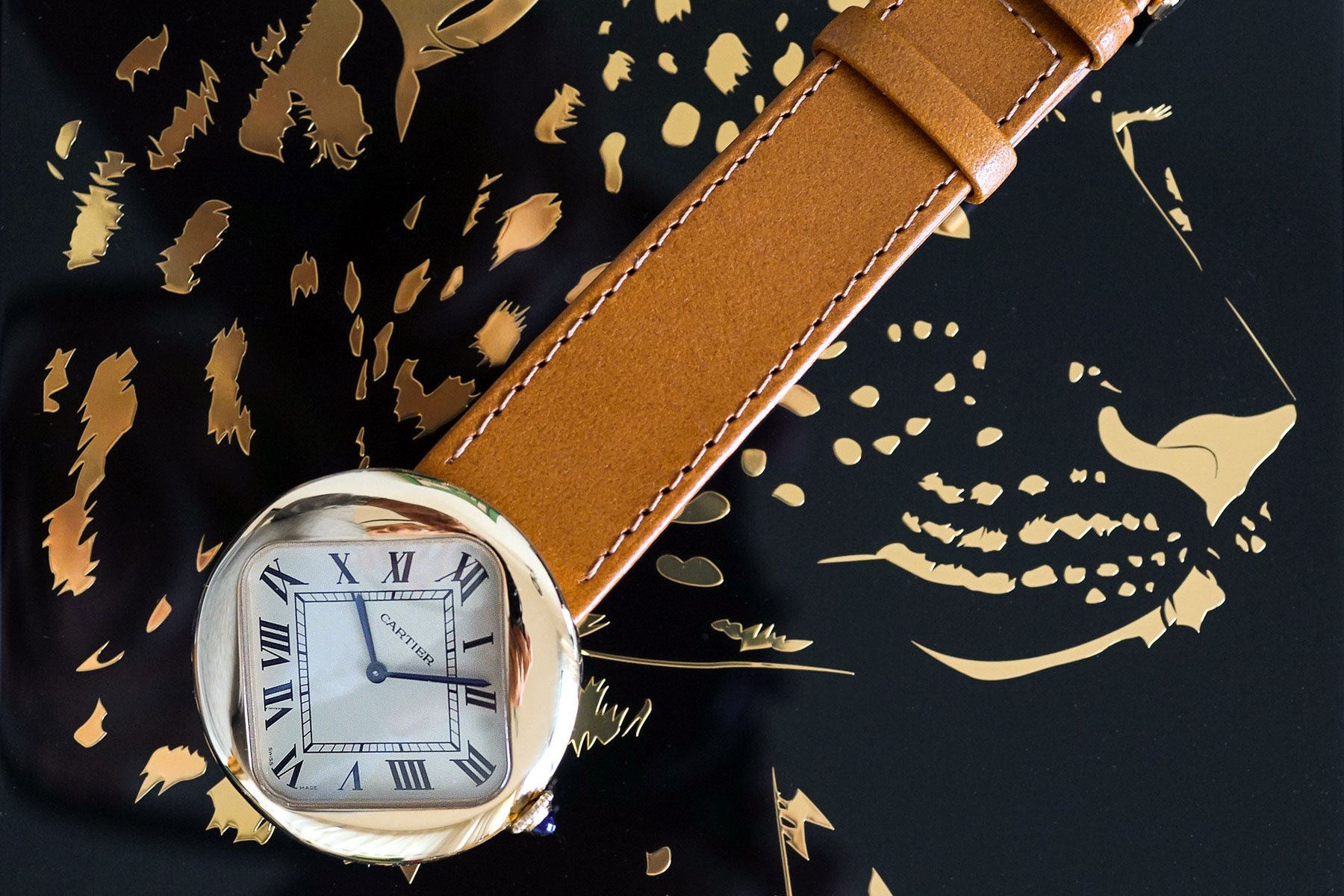 What is the future of the Pebble?

It goes without saying that it is impossible to predict what the future of the Pebble will be. The price of the watch is outrageously high, especially when compared to other Cartier models in yellow gold that have the same Piaget movement and go for about a third of the price. The high price might be based on the fact that two vintage Pebble watches have recently fetched exorbitant prices at auctions. Hopefully, this gives the new buyers of the Pebble a certain exclusivity because it is quite remarkable, of course, that no other model or different size of the Pebble has been available earlier, except for the first six originals from 1972. 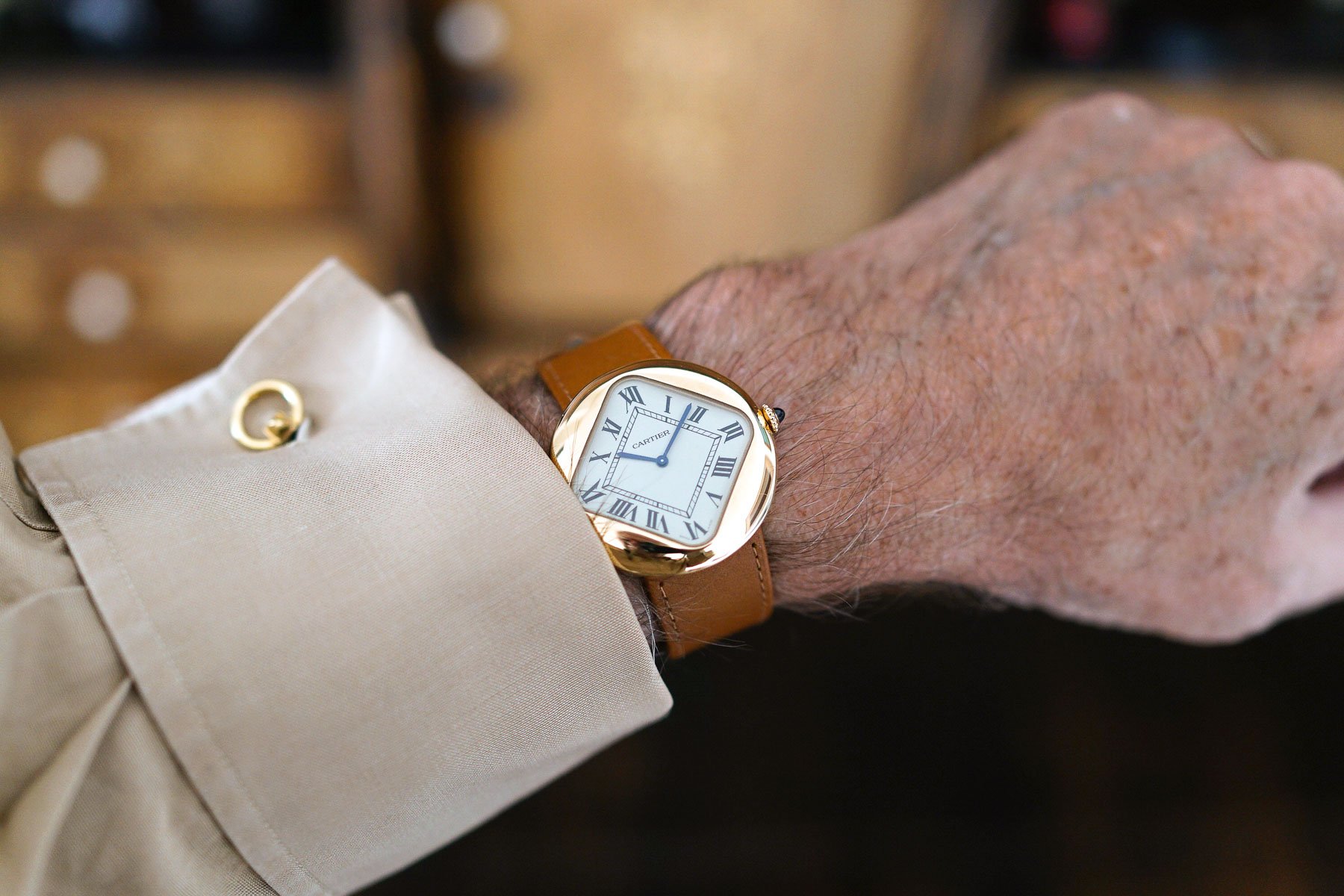 Collectors who have bought a reissue Crash from 2019 — of which 67 pieces came on the market — certainly have an exclusive watch. However, before 2019, there had been various other Crash watches, including those in a slightly smaller size and the custom-order models that are made for collectors. Overall, this has made the Crash watch less exclusive than the Pebble.

For the new owners of the 2022 Pebble, it remains to be seen how Cartier will handle this amazing model in the coming years. Only time will tell if this magical, UFO-like watch can retain its exclusivity.

What do you think of Pebble, its history, its design, or its uncertain but intriguing future? Please do share your thoughts in the comments.