Is this the answer to my grail-watch dilemma?
Ignacio Conde Garzón
comments 75
Share

Here at Fratello, we are always happy to express our honest opinions on watches and watch brands, even though they can often differ. You probably read Lex’s opinion on the Tudor Black Bay Pro yesterday. As he hinted at in the article, we didn’t all agree. Though our thoughts on the watch itself align, we disagreed on the dilemma of its inspiration. And therein lies the beauty of watch enthusiasm. There are as many opinions as there are watches. Personally, the historical baggage that the Black Bay Pro carries doesn’t bother me one bit. In fact, as a young collector with an appreciation for vintage watches, seeing a “Freccione”-inspired design make it back at an attainable price point is more than a welcome sight. We’re not trying to start a dueling-banjos-style exchange here, but Lex’s Tudor diss track inspired me to share my (far more favorable) take on the watch.

In fact, seeing it in the glass display in the Tudor booth just under two weeks ago, I couldn’t help but wonder if it was the answer to my 16570 grail dilemma. Though I haven’t yet made up my mind, the more I look at the BB Pro, the more I think that might be the case. The original “Freccione” was never a realistic grail. Spending €30K on a watch is something that I don’t think I’ll get to do in this lifetime. The appeal of the Rolex Explorer II (16570), however, has me plotting and scheming. Yet, the more time I spend counting the ways I could save up for the watch, the more the price sneaks out of reach. The Black Bay Pro’s €3,770 price tag makes it quite a tempting alternative and a great option for all collectors looking for a brilliant, affordable, and modern GMT watch. 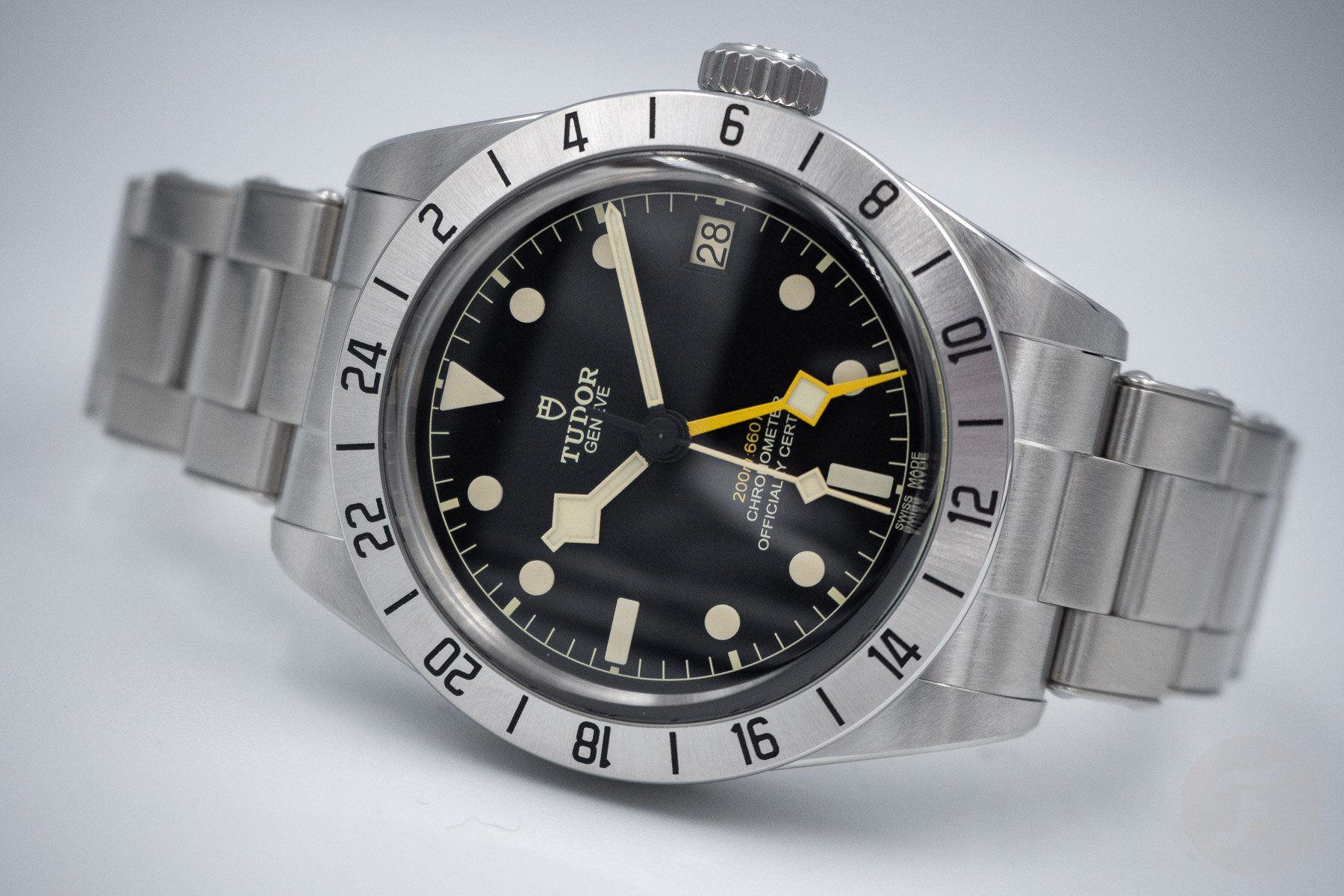 The Tudor Black Bay Pro — my next watch purchase?

The only problematic thing I see with the Black Bay Pro is how much I want one of my own. Sure, there’s a slight feeling that it draws inspiration from something from the past. But the rarity and unaffordable price of the Rolex 1655 means that it was never going to be an option anyway. In some way, Tudor is providing alternatives to these iconic watches that are actually affordable for its audience. If one thing was clear in the Tudor booth, it’s that “The Shield” is a brand with its sights set on young people. We were told to stand back from the large curved screen inside, which displayed footage of an impressive break at Nazaré. “You don’t want to get splashed by the Tudor wave.” The video depicted young people in their late 20s or early 30s.

They traveled the world, hiking, running, climbing, surfing, camping out in the wild, and riding bikes through the city with the same ease with which they drove a convertible 4×4 through the desert. On their wrists, Tudor watches kept them company in their travels and adventures. And as much as I approach marketing materials with a healthy dose of cynicism, I must admit, it really resonated with me. I left the Tudor booth thoroughly sold on the idea of getting my hands on the Black Bay Pro. It’s no secret that I’m in the market for a GMT watch. And as appealing as it is to save and spend an irresponsible amount of money (subjectively speaking of course) on a 16570, the Tudor BB Pro cast some doubt on that. 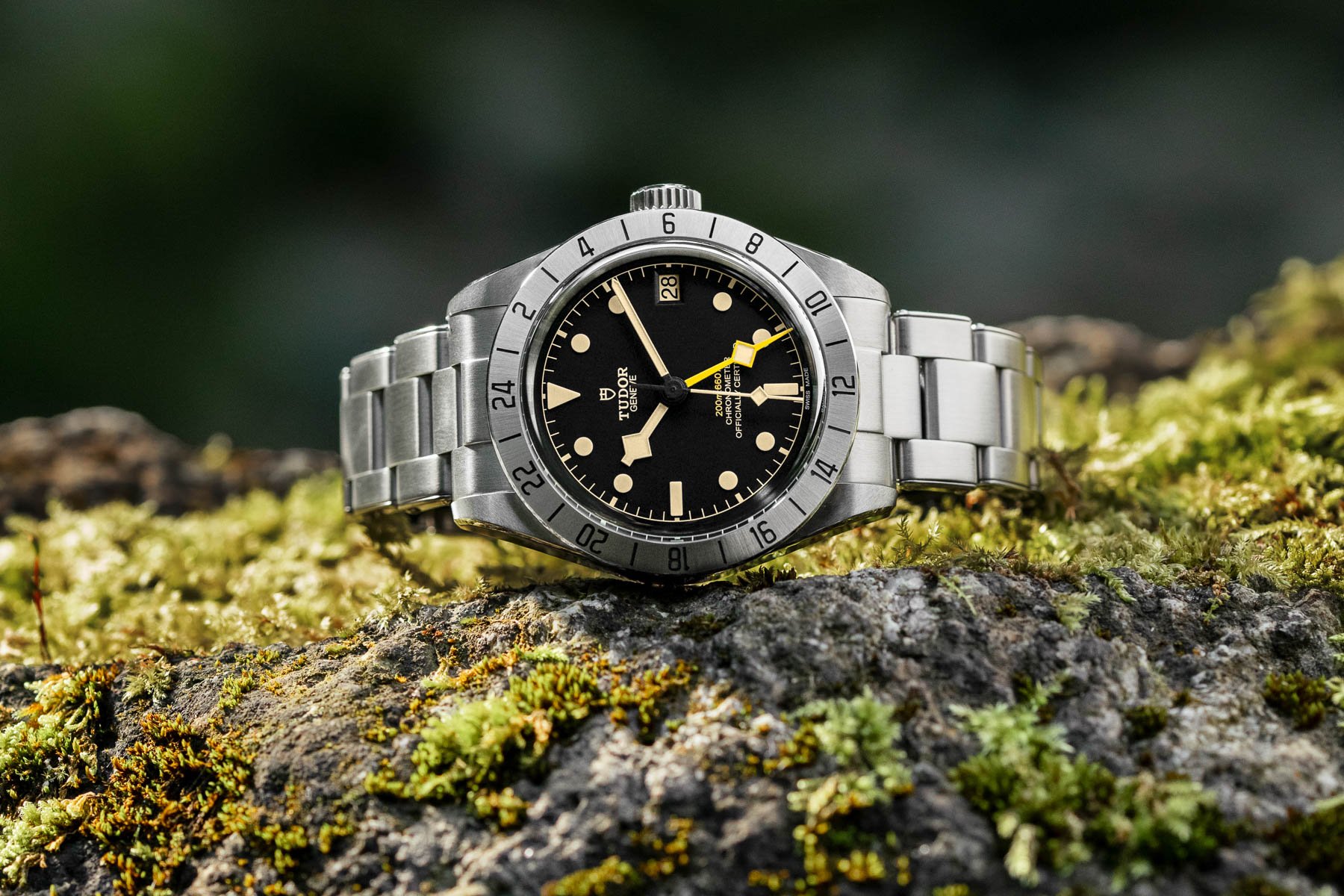 The Tudor Black Bay Pro, to me, offers everything I look for in a modern sports watch and then some. It has a brilliant tried-and-tested design with perfect proportions and enough water resistance to tackle anything I can throw at it. There’s the comfortable and tapered steel bracelet with a clever micro-adjust system, and last but not least, a reliable movement with the added benefit of a true “flyer” GMT complication. 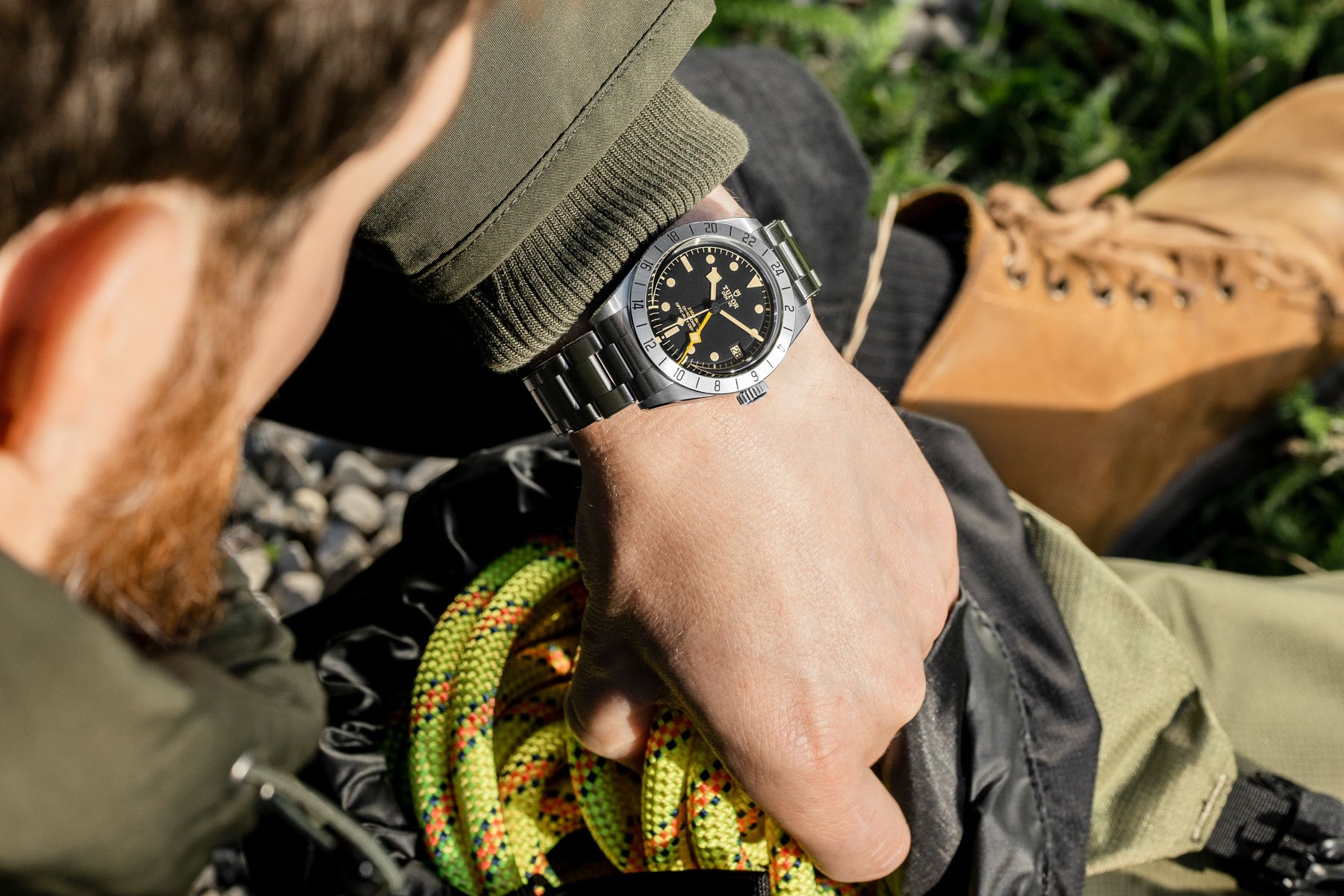 The fact that the watch is reasonably priced, that the manufacture caliber MT5652 is COSC-certified, and that the redesigned steel bracelet is the best on offer from Tudor in modern times are just the many cherries on top of an already delicious sundae. And I have to admit, having tried on the watch in Geneva (yes, that’s my wrist in our pictures) and now writing this article isn’t making resisting the siren’s call of the Black Bay Pro any easier… 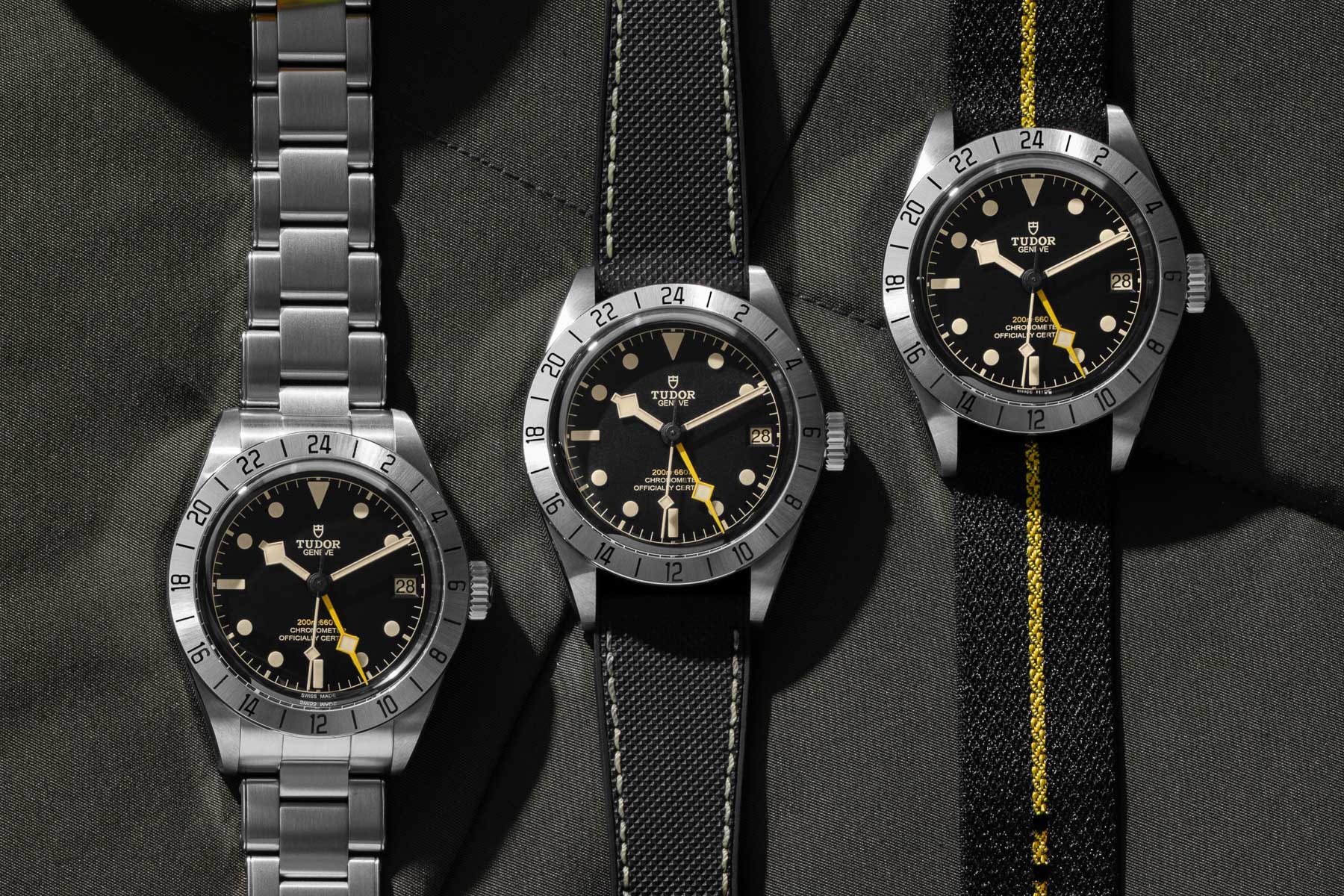 Though Lex raised some extremely valid points in his article, I must say that the design inspiration from an icon of Rolex’s past really doesn’t bother me one bit. I even saw some renders making the rounds on social media which exchanged the signature Black Bay dial’s round markers with squares. That gave the watch even more of a resemblance to the “Freccione”, something which this watch clearly doesn’t need. In fact, it’s the differences that make this watch a Tudor instead of a Rolex that really give it so much appeal. I hear you asking though, “How tall is the case? Is it too thick on the wrist?” And my answer to that is, “No, not at all.” The watch sits beautifully on the wrist. It sits as tall as it needs to, and it’s far from uncomfortable or unseemly. 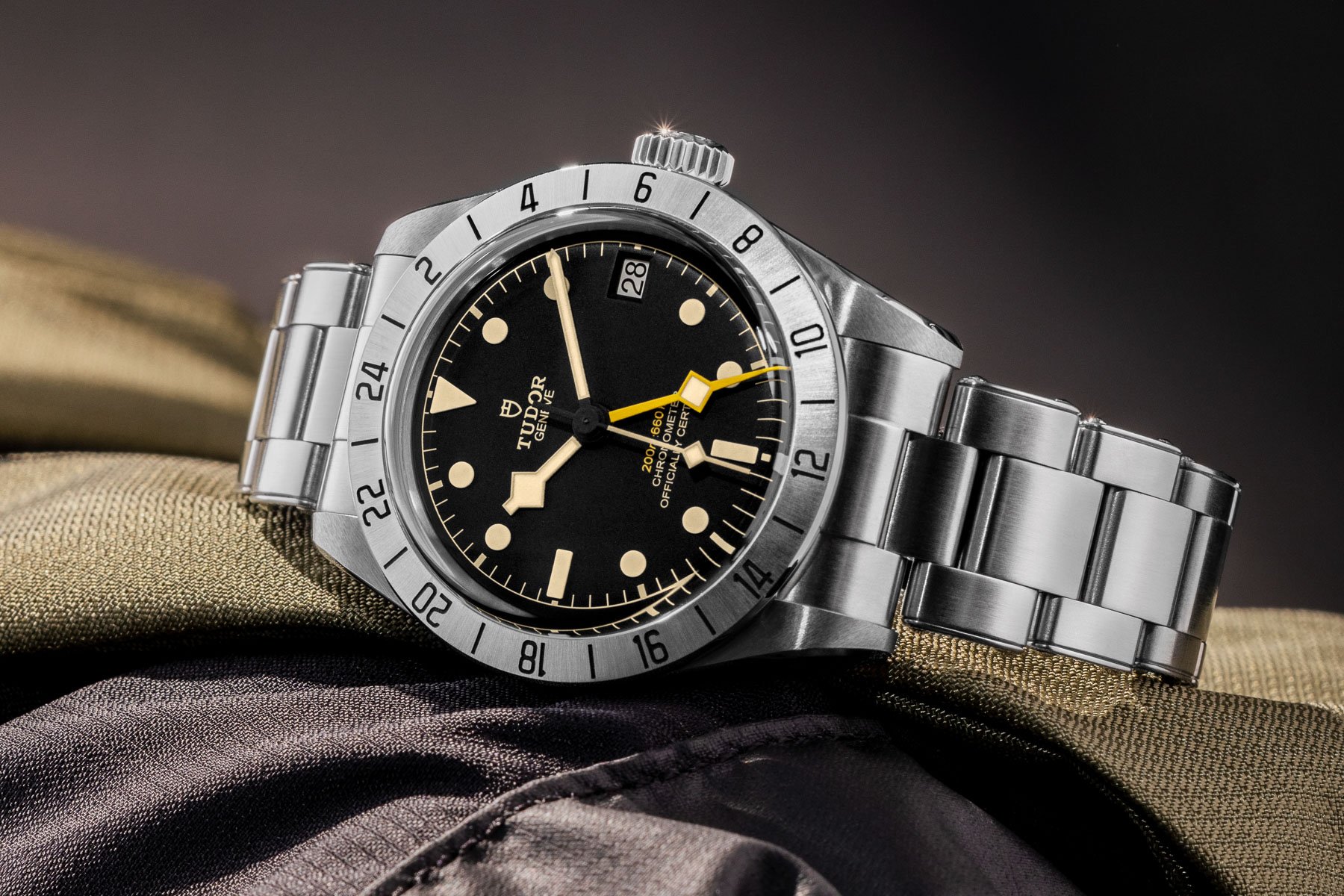 Will the Tudor Black Bay Pro be my next watch? To be honest, I haven’t made up my mind yet. Something about the 16570 still appeals to me too significantly to ignore. Perhaps it’s the icy polar dial, or maybe the slimmer overall profile… There’s just something that doesn’t quite allow me to stop thinking about that watch. However, I’m a pragmatic individual, and paying €9,000 for a watch that only a few years ago was trading at half that price seems kind of ridiculous. That definitely has me looking the way of Tudor. Other factors, such as the unwanted attention that a crown on your dial draws and the undeniable convenience of a modern watch also come into play. Ultimately, the decision will take place sometime this year. But the appeal of the Black Bay Pro has certainly made my choice far more difficult than I ever imagined. 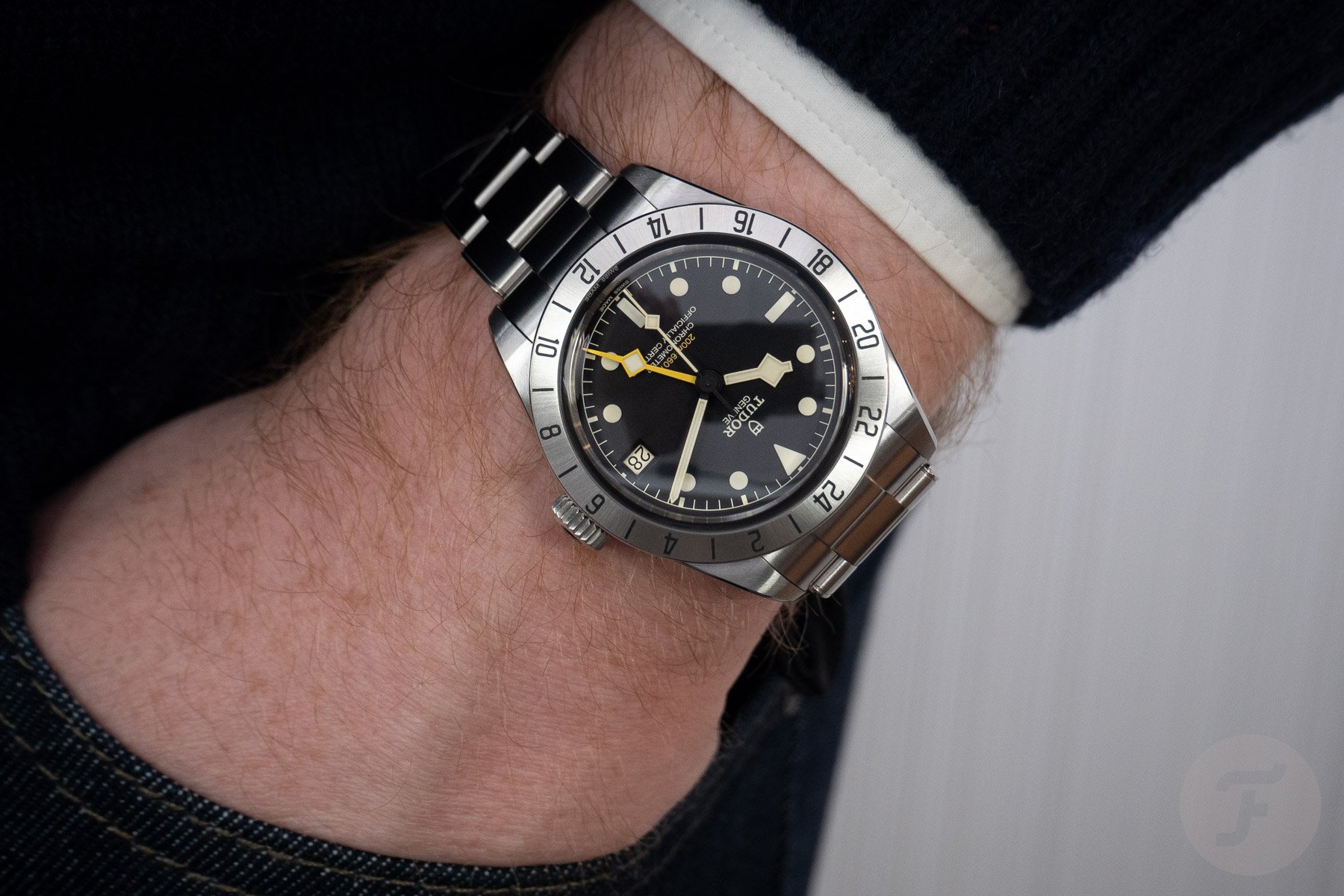 There you have it, dear Fratelli — the flip side of the proverbial coin, a different take on the Tudor Black Bay Pro. It’s a take that I stand by, yet one that hasn’t caused Lex and me to hold any hard feelings against each other (even after our Fight-Club-style altercation in the parking lot). And that’s the beauty of watch collecting. Opinions can differ, but the camaraderie and passion for watches are impossible to dilute. As always, I’d love to hear your thoughts in the comments below. Are you Team Lex? Or are you Team Nacho?