Welcome to Wrist Game or Crying Shame where watching campaign speeches is not required for participation. Today, we’ll vote on an oft-forgotten Girard-Perregaux Sea Hawk 7100. But first…

Last week, I gave you a pure gimme with a ludicrously priced Rolex Submariner Hulk. That watch went down like Bruce Banner in an 87% Crying Shame loss. Still, I wonder about the 13% of people who voted Wrist Game. Do they own the watch already or perhaps just like the watch and not the price? If they like the price, I hope that someone else is watching their nest eggs. Today, we bring things down almost tenfold in price, but we’re still going to look at another diver. This just might be one you haven’t seen before, so feast your eyes on the slightly more dressy affair in the Girard-Perregaux Sea Hawk 7100. 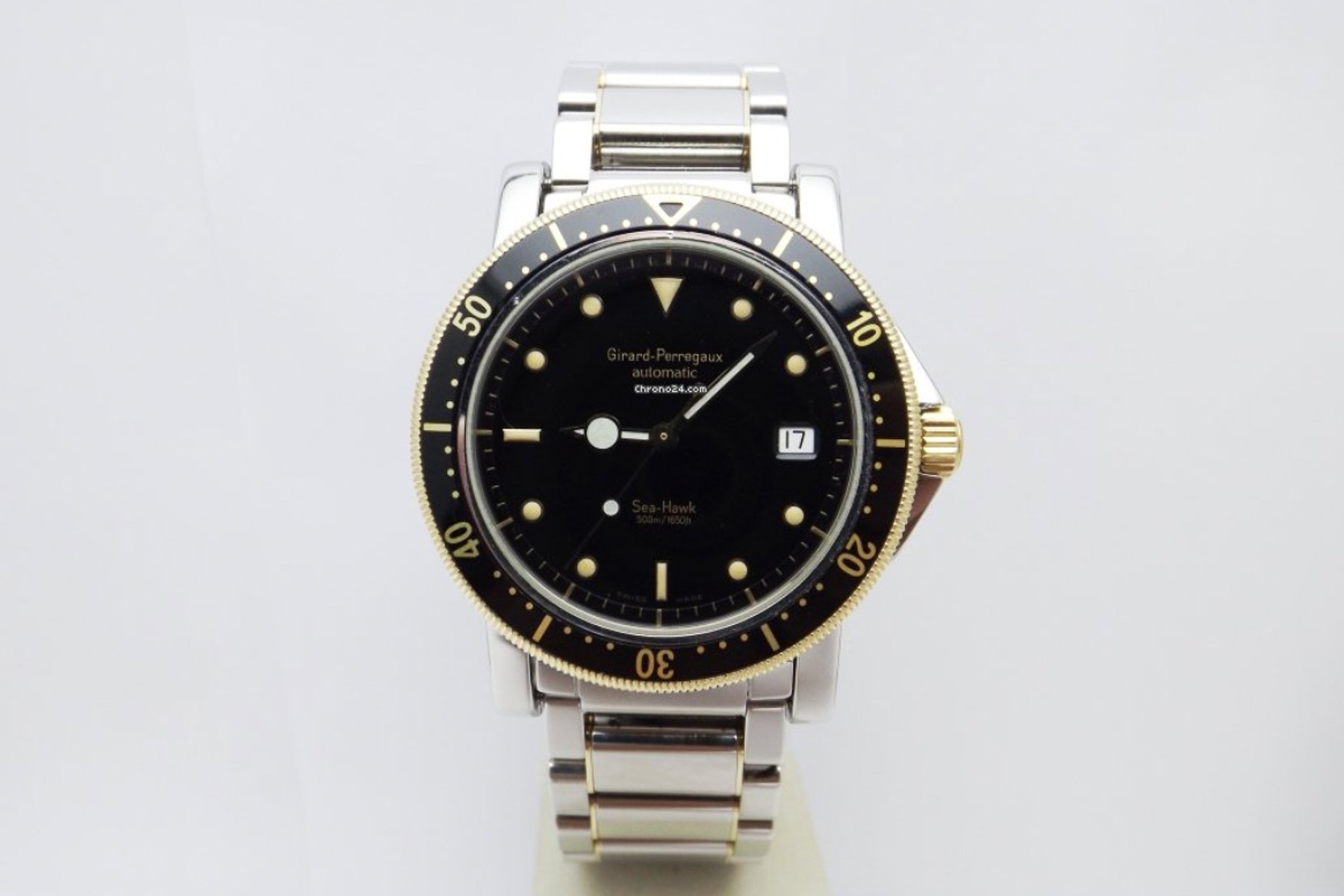 Girard-Perregaux is a very familiar brand. Their watches today are well-regarded if perhaps not as commercially known as other high-end Swiss manufacture. Historically, they’ve done some neat things as well. They were crafting tourbillons back in the late 1800’s and they even introduced the world’s first high frequency (36,000 vph) movement in 1965. But I think it would be fair to say that they were out a bit out of focus during the 80’s and 90’s. Well, let’s sharpen the lens a bit here with this late 80’s to early 90’s Sea Hawk 7100. 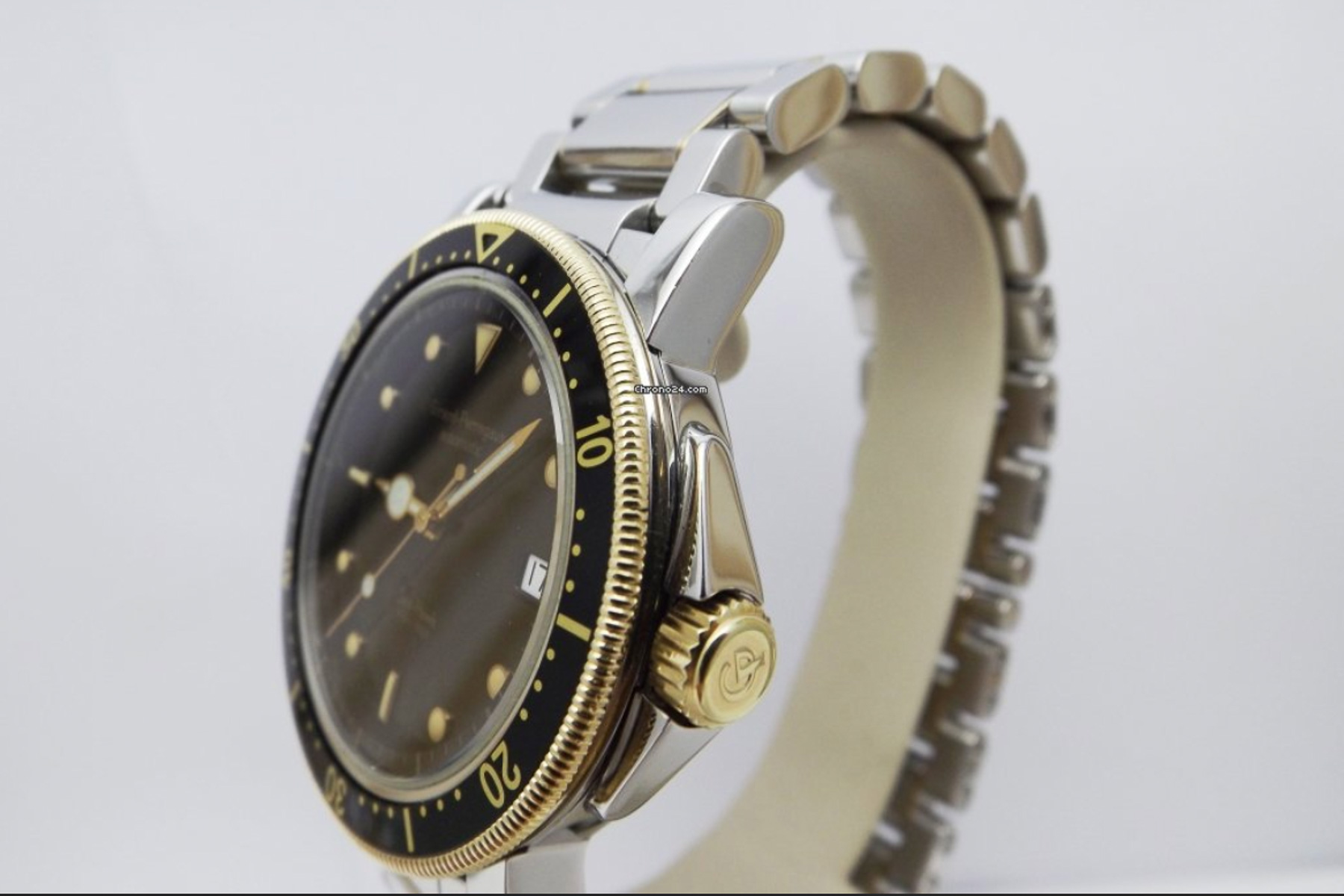 A clean and stylish diver

The Sea Hawk line dates back to the 1940’s and I suppose that the best way to describe it would be as a competitor to the Omega Seamaster. It’s a watch that, as the name suggests, is water resistant with both dressy and proper dive models in the range. If you look for the dressier vintage sorts, they’re quite affordable. As far as the real divers, they can get pricey. The Sea Hawk name disappeared for a bit but as this post from Blomman notes, returned again in 1988. As you can see, it blended a bit of dressy and real diver. 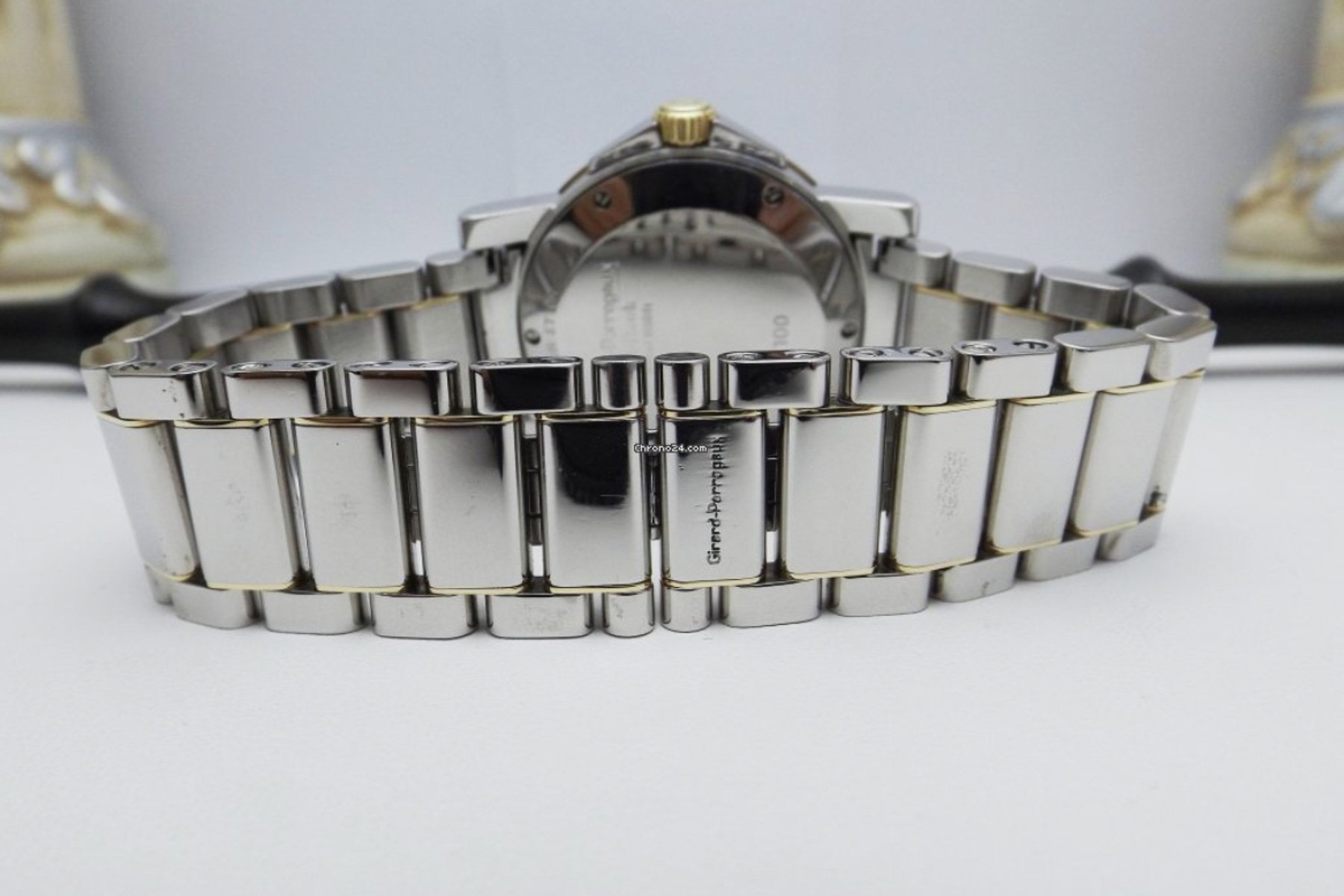 The Sea Hawk 7100 came in at a very wearable, but late 80’s friendly, 38mm in diameter and 10mm thickness. The chunky straight lugs helped beef the case up a bit, though, and housed either a polished bracelet or leather strap. The bracelets, it should be noted, came with a butterfly style release, so there’s no wetsuit extension. GP made these in steel, bi-color, and even solid 18K yellow gold. The watches came in many different dial colors and some with Arabic numerals on the dial. They all featured a lollipop-shaped hour hand and straight minutes hand. 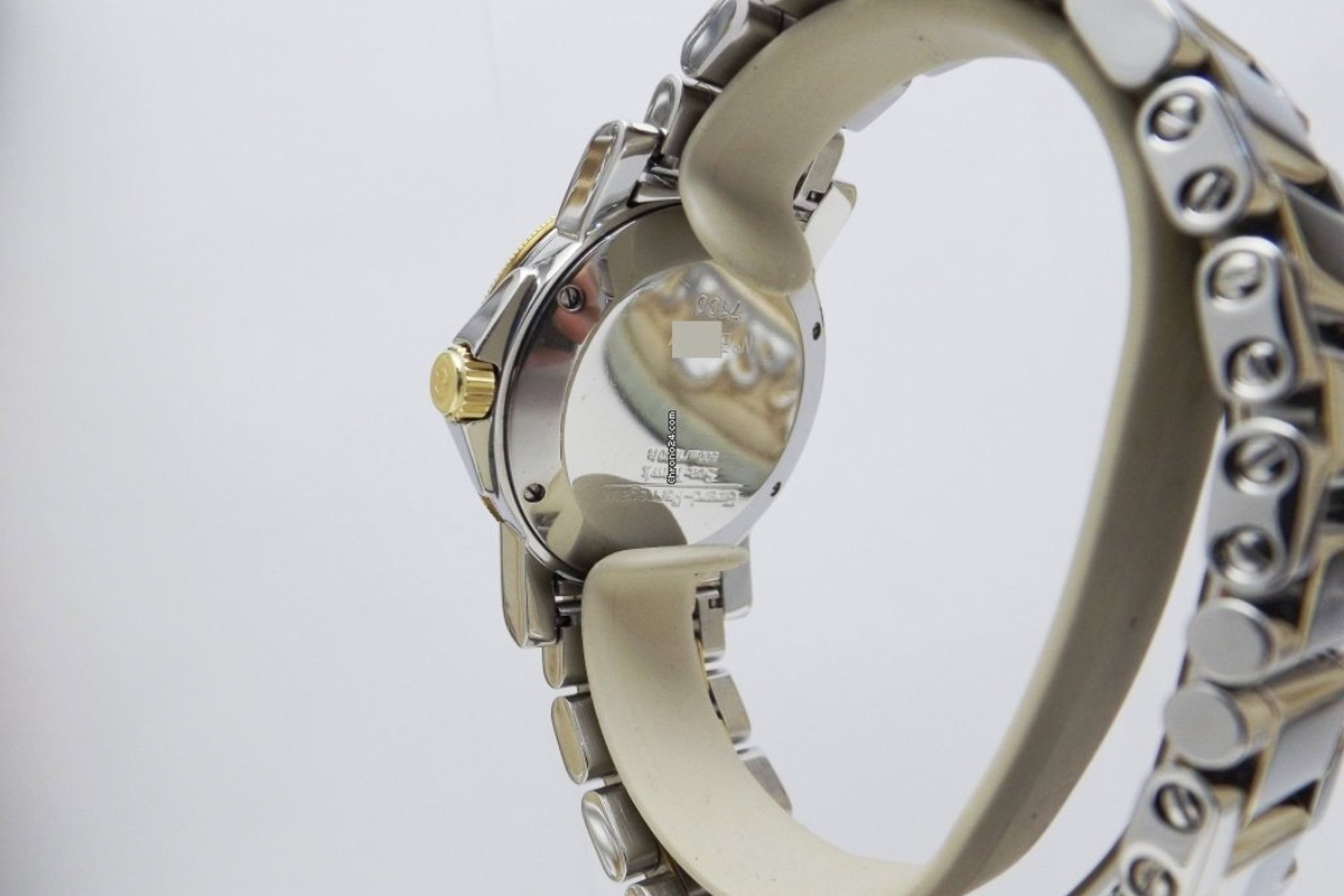 Quite capable with 500 meters of water resistance

Despite their dressy looks — even the steel watches often contained some gold highlights on the bezel, hands, or indices — these watches had some proper diving chops. They had flat sapphire crystals and case backs held tight with six individual screws. A screw-down crown was standard fare. Hence, the steel and two-tone editions brought a damn surprising 500 meters of water resistance to the game. Oddly, the gold editions only have 50 meters, so perhaps the crowns were different. Movement wise, the same post above tells us that the 7100 came with a Lemania-based movement early on, but most use a decorated ETA 2892 known as the GP caliber 2200. 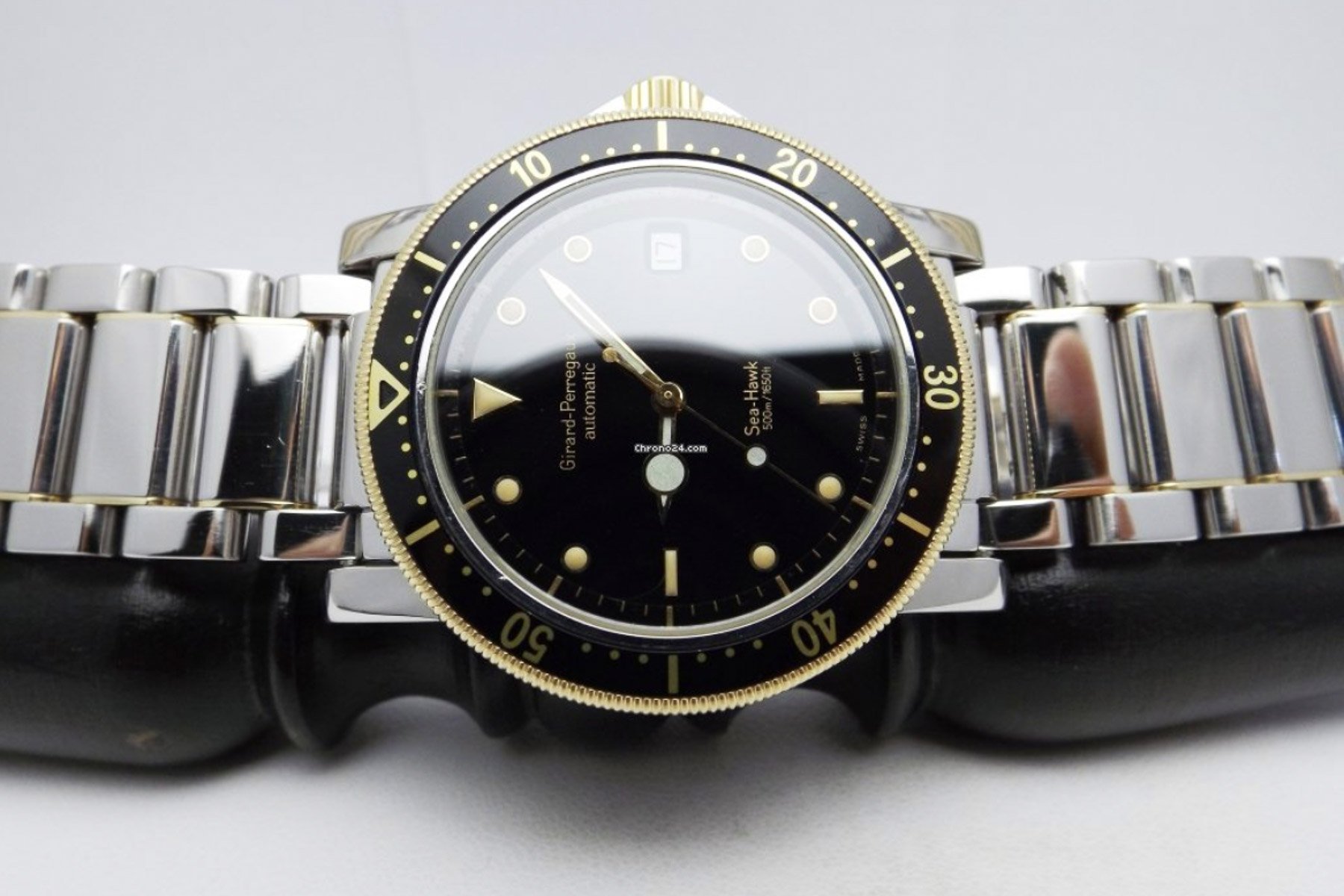 Internet lore on the Sea Hawk 7100 is somewhat tough to find. What I do know is that the first one of these I ever saw came courtesy of a Time 4 a Pint get together in London several years back. One of the regulars had a white-dialed beauty with a blue and red bezel (the red doing its thing for the first 15 minutes on the bezel). It was amazing and from what I can see, quite rare. From what I read, the 7100 had sapphire bezels and the nearly identical 7300 that came along a couple short years later had a typical aluminum inlay. Apparently, the sapphire bezels were quite fragile and most have been replaced. 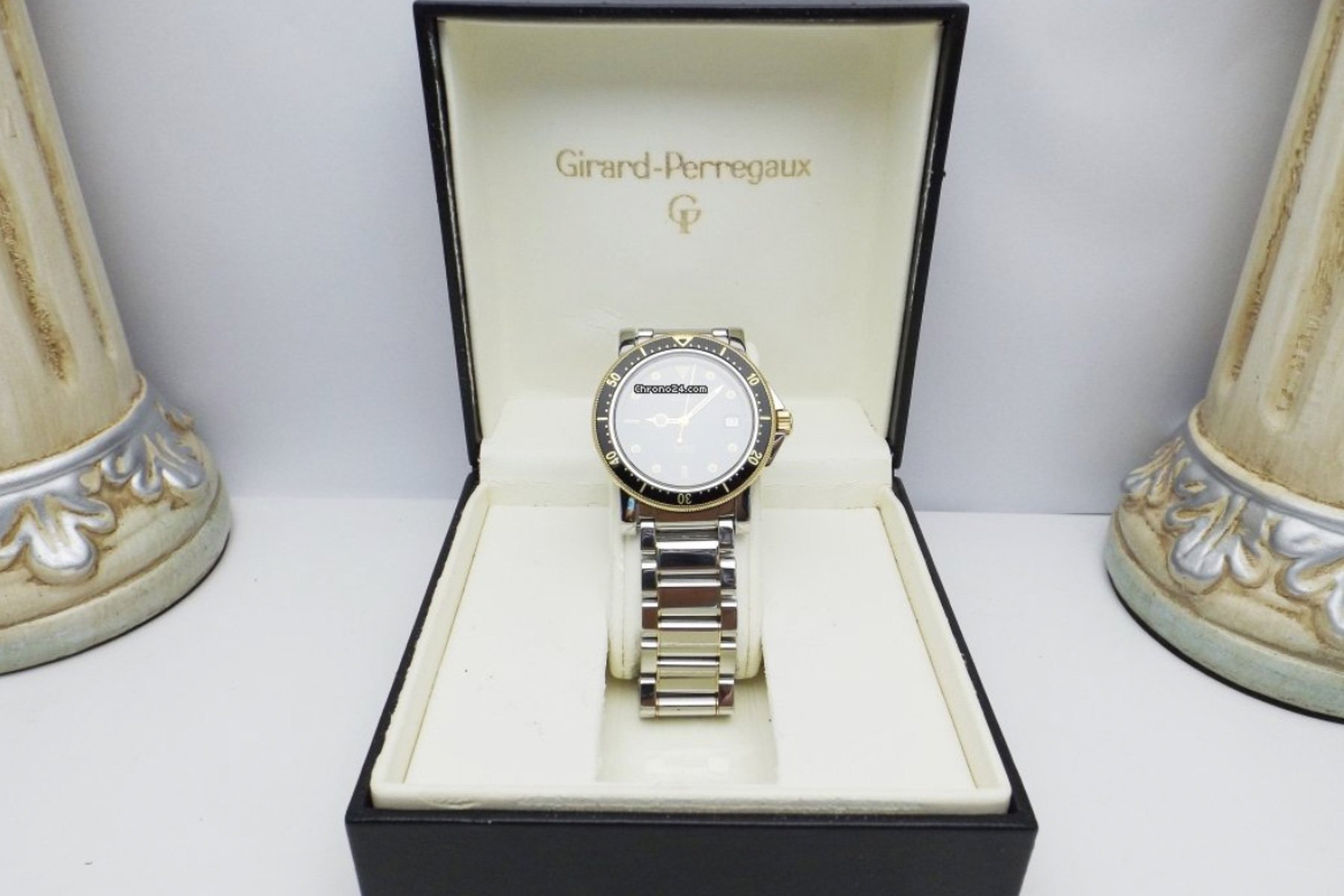 Today’s Sea Hawk candidate happens to be a two-tone model on bracelet and it looks to be in very nice condition with its original box and no papers. The watch comes to us via Chrono24 and the pics come from the seller who resides Italy.  The tritium dial has aged nicely, but I’m not able to tell if the hands have been replaced. If so, perhaps they’re tritium too. The bracelet looks like it’s in good shape and since I own and all-steel version, I can vouch for its comfort. The gold hardware looks nice too.

At €2,950, I’d calmly suggest that this Sea Hawk is a rather classy way to stand out from the crowd of usual suspects. It comes from a good marque, has strong looks, and even brings a little glitz to the game. But as I always say, I’m only one vote. It’s your turn to click yay or nay and let us know what you think.