Wrist Game or Crying Shame returns with a look at the dearly departed Rolex Submariner Hulk 116610LV. We think you’ll enjoy this one. But first…

There was no Wrist Game last week because we were off galavanting in Geneva for the city’s first ever Watch Days event. Sorry about that, but I was too busy stuffing my pie hole with melted cheese in the form of, um, melted cheese. But the week prior, I gave you the Sinn EZM 12 Rescue Watch. It turns out that this handy watch needs no saving because it saved the day with a 74% Wrist Game win. I hereby predict that today’s Rolex Submariner Hulk 116610LV will (or should) land with 0 Wrist Game votes. Then again, some doofus didn’t vote for Derek Jeter to be admitted to the Hall of Fame, so I could be wrong. 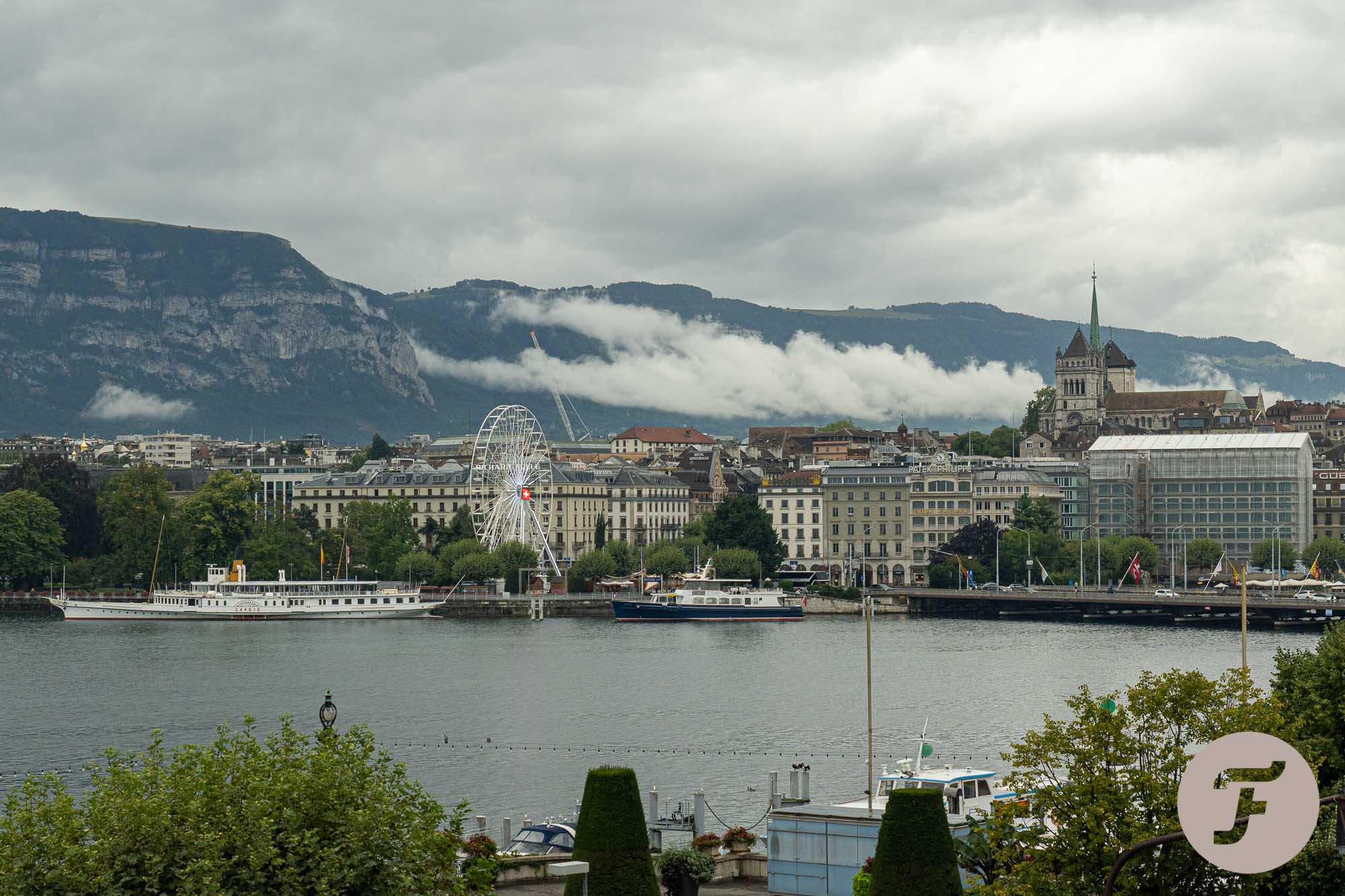 I mentioned that we were in Switzerland last week and the country always amazes me. It terms itself as neutral, yet costs are anything but. Switzerland truly knows no bounds when it comes to pricing. For a piece of fried chicken with some ham and cheese inside, think nothing of dropping 35 bucks in the part of town where the world’s oldest profession runs free. Move towards the lake and the figurative soaking only increases. That being said, some denizens tell us all is well because taxes are low. The larger populace, though, sides with us lowly EU folks and agrees that there’s no personal pizza worth 40 bones. Perhaps today’s private Swiss seller has had enough of paying through the nose and, instead, is attempting to pay it forward with a very pricey Rolex Submariner Hulk 116610LV.

The Rolex Submariner Hulk 116610LV debuted way back in 2010 at Baselworld. It took fans by surprise due its green cerachrom bezel and matching dial. Duly, it obtained its superhero nickname. After all, the notably conservative brand had only offered a green bezel on its Sub Date 16610LV up until this point. With such a bold move, the new dial color caused the type of weeping once normally reserved for the Beatles or Elvis.

The Rolex Submariner Hulk 116610LV also brought along a brand new case known as the “maxi”. Gone were the, dare I say, industrially elegant lugs. Instead, the new case looks like it has never skipped leg day. With chunky, let’s call them clumsy, lugs that could call a fly by night microbrand home, the unchanged 40mm diameter watch looked bigger. Exaggerated lume plots also came in because, let’s face it, prior subs were so illegible. 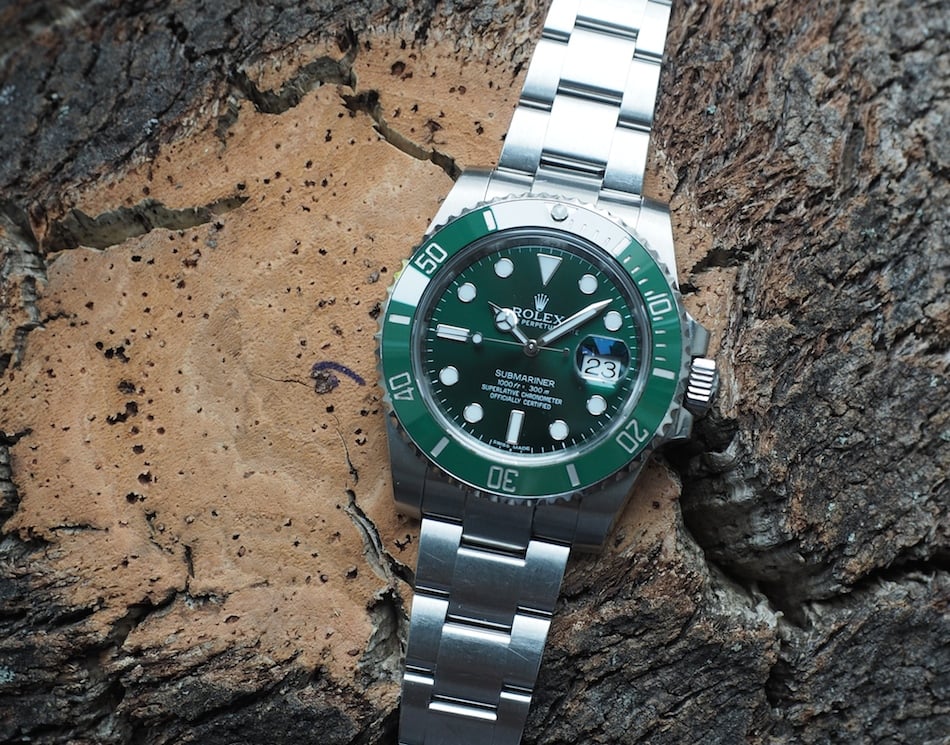 If it sounds like I’m throwing shade at the Rolex Submariner Hulk 116610LV, it’s because I am! I really have little love for this generation of Submariner. After saying all this, I can’t blame anyone who acquired one at list price from their local boutique. It’s still a Submariner and that means that it wears well, boasts serious quality, and holds its value (or goes up). More importantly, I also get that a Sub is still seen as the aspirational watch item and if you wanted a new one during the past ten years, this was probably the best of a bad bunch. 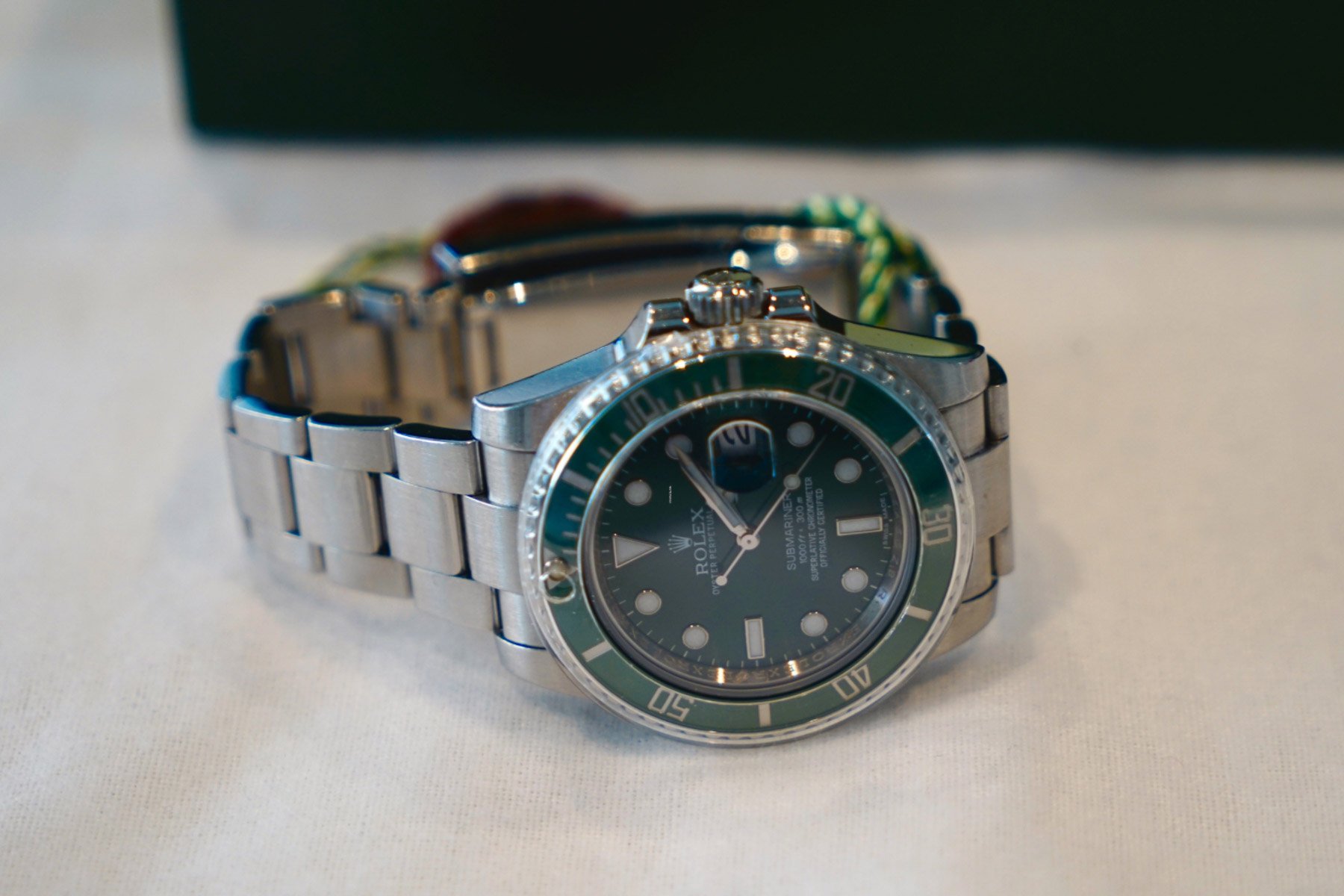 I also realize that the Rolex Submariner Hulk 116610LV has proven extremely popular during its production run. That production run ended yesterday with the announcement of a brand new family of Subs. Yes, if you’re reading this ten years from now, just know that it was super easy to walk into a local boutique, chew the fat with the salesman, and choose between multiple brand new Hulks. I mean, who wants micro scratches on your brand new Rolex caused by shipping abrasion? Hahahaha! I think the Hulk has been tough to source since roughly 2013 and prices on the secondary market are shocking.

Like I said, I don’t find this watch attractive in any one of its color forms and the Rolex Submariner Hulk 116610LV is no exception. Therefore, I really don’t get why someone would pay more than retail. Today’s huckster, though, takes things to such an extreme level that I’d like to meet anyone who’d actually consider paying this price for this watch. 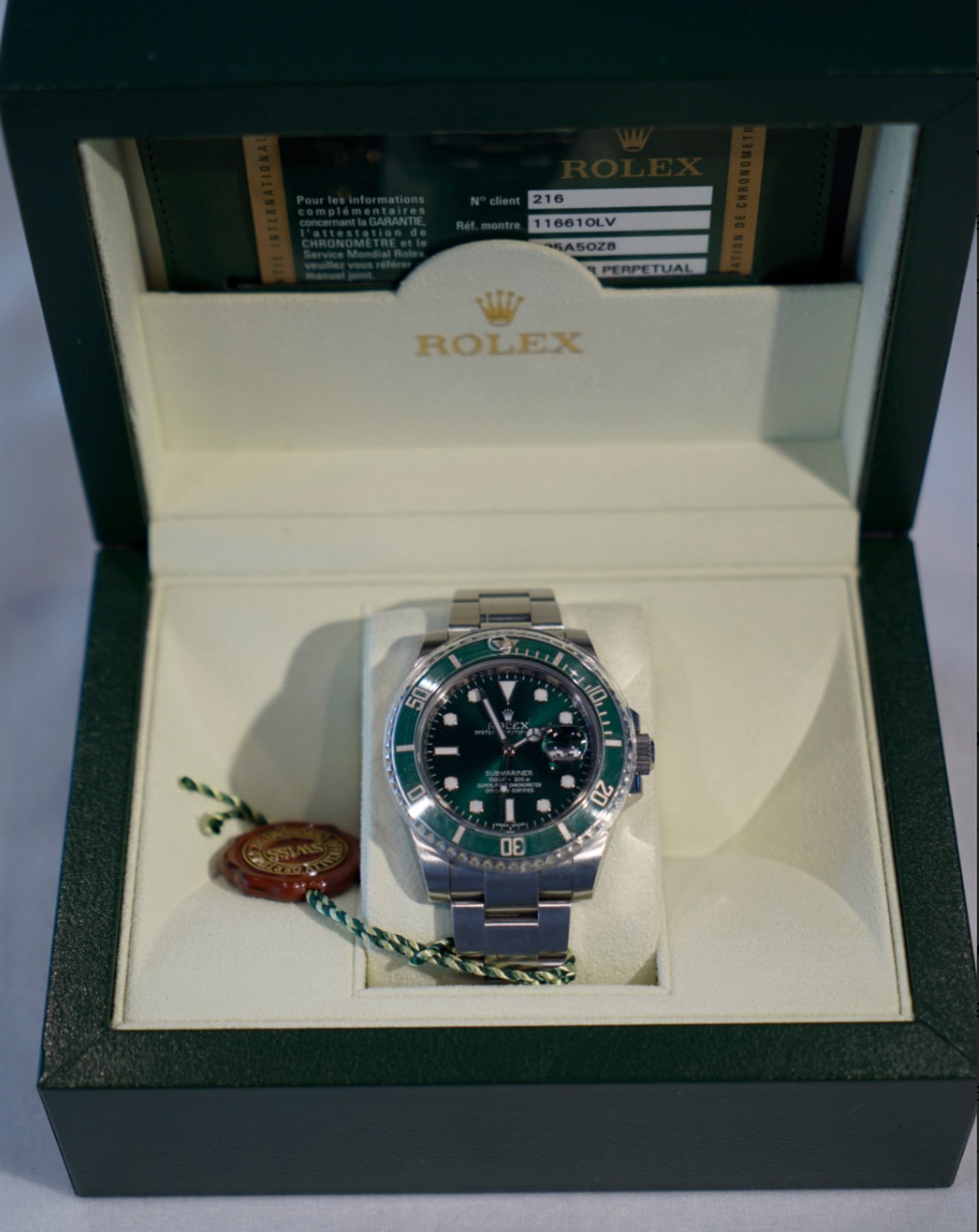 You see, today’s Rolex Submariner Hulk 116610LV is on sale for a jaw-dropping €28,164 out of Switzerland (the so-so pics belong to the private seller). And get this, it has its original box and original papers, but it’s in “good” worn condition. Perhaps it owes its value to bathing in potable lakes and having slept in alpine suites. It sits on Chrono24 and the only Hulk that’s more expensive is a NOS version with Sultanate markings on its case back. There are plenty of senseless ads with prices over €20K and those are bad, but this is just nuts to me. Sadly, we already located many ads today with the words “discontinued” in the title and dreamer prices to match. I shake my head. 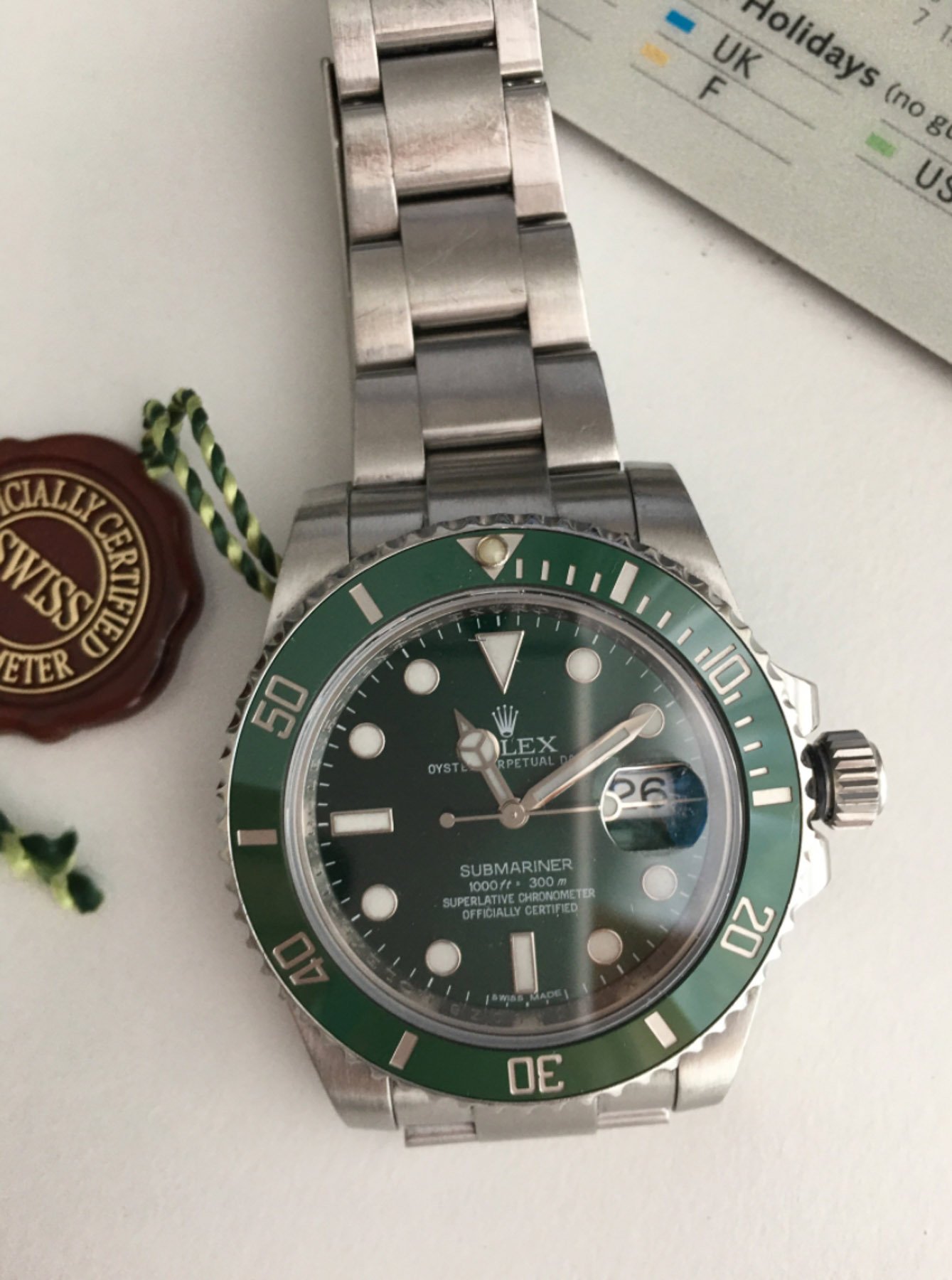 I realize that I’ve led the witness in today’s Wrist Game. Tell me I’m wrong. Tell me I’m missing out on the investment of a lifetime with the Rolex Submariner Hulk 116610LV. Or, feel free to take out all your anger in the comments section below and let this watch, and all the speculative sellers for that matter, have it. And with that, it’s time to vote…

Hot Topics
Introducing: The Omega Speedmaster Super Racing With Spirate System
165 comments
Design Vs. Specs — Which Is More Important To You When Buying A Watch?
87 comments
New Release: The Limited-Edition Seiko Prospex SLA067J1 Diver
63 comments
My Predictions For New Omega Speedmasters In 2023
58 comments
The Best Independent/Microbrand Alternatives To The Rolex Explorer In 2023
52 comments
Popular
A Question From A Reader: “Which Modern Speedmaster Is Closest To The Original Moonwatch?”
Robert-Jan Broer
14
Top 10 Rolex Watches – Overview of Models Favoured By Our Readers
Fratello
25
Rolex GMT-Master History And Overview Of All Major References
Robert-Jan Broer
21