Would you keep it clean with this highly engineered watch for €2,527?
Michael Stockton
comments 11
Share
Wrist Game
Crying Shame

Welcome back to Wrist Game or Crying Shame where voting remotely has always been part of the new normal. This week we review a barely worn Sinn EZM 12 that needs rescuing. But first…

In the case of LL Cool J, the opening line of “Mama Said Knock You Out” is one of hip hop’s most famous. “Don’t call it a comeback” spat the rapper because, as he mentioned, he’d been with us for quite some time. Well, for LL it was a bit of a return to form and people went nuts.

With last week’s TAG Heuer Monaco CS2110, though, this was a comeback because the renowned chronograph had actually been absent. But sadly, at least in your view, this Monaco wasn’t the revival you desired. Not even the human beatbox could save this Heuer as it went down in a 60% Crying Shame loss. Now, let’s see if this week’s Teutonic Sinn EZM 12 represents the kind of Germanic chart-topping hit that, to my ears, only David Hasselhoff could create. 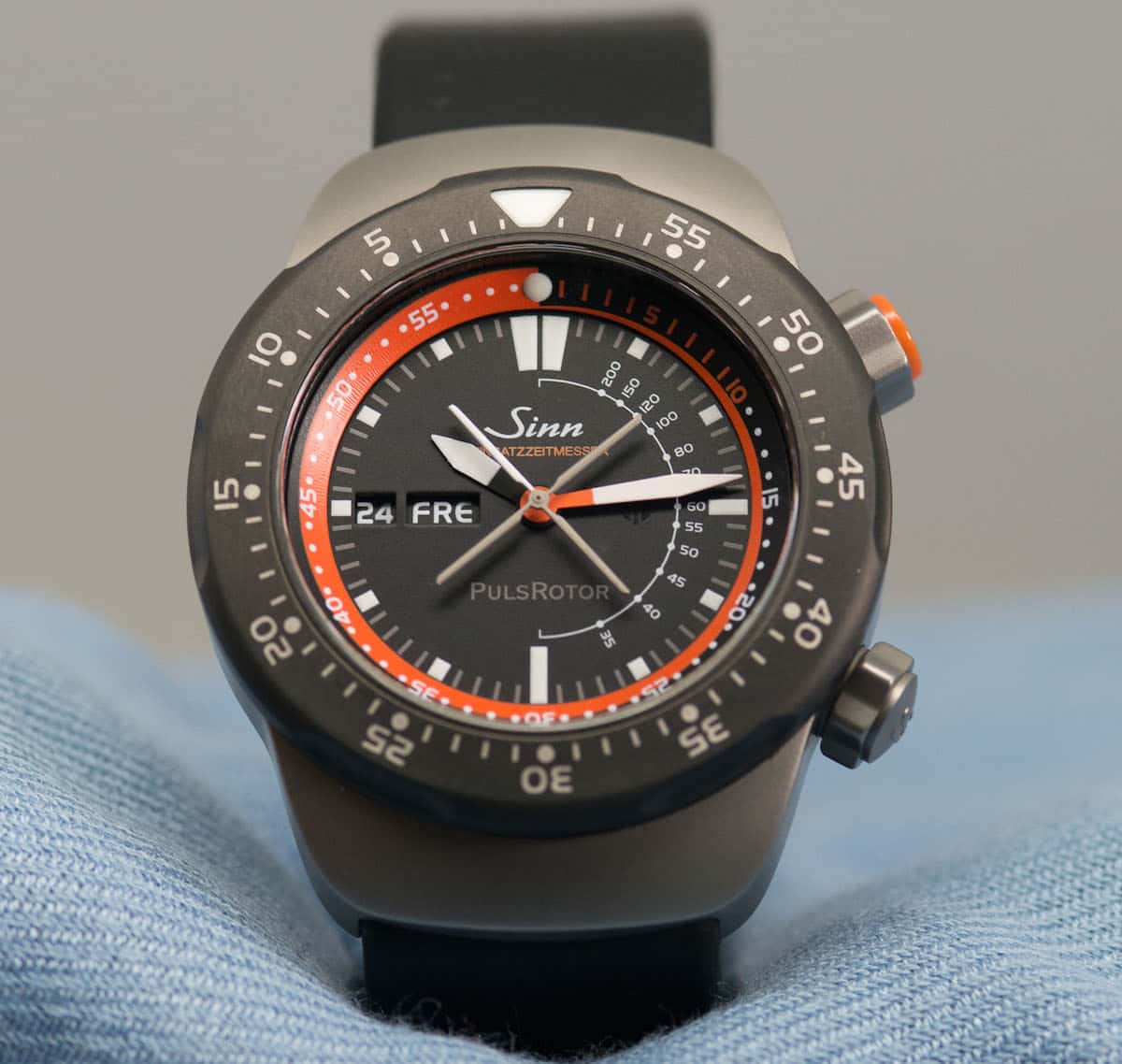 The year was 1987 and one of Stuttgart’s finest creations moved into our family garage. I’m talking about the W124 series E Class Mercedes-Benz of course! It was an anthracite grey sedan with tan indestructible “MB-Tex” upholstery. Seriously, this stuff was amazing and scoffed at the searing South Florida sun! I loved looking at that car and riding in it as a tween. Years later, though, it required some fixes. I recall one such glitch that plagued the front passenger window and its functionality.

My dad, who is far more than a shade tree mechanic, went to work on replacing the window regulator by first removing the door card. He came away absolutely astounded by the sheer number of fasteners holding this cover to the door, but more so by the incredible variety of them. Torx tips were just the beginning! And so it was that my Dad — after years of working on all sorts of vehicles — came head to head with some serious over-engineering. And why do I bring this up? Well, we’re talking about Sinn and its EZM 12 rescue watch. 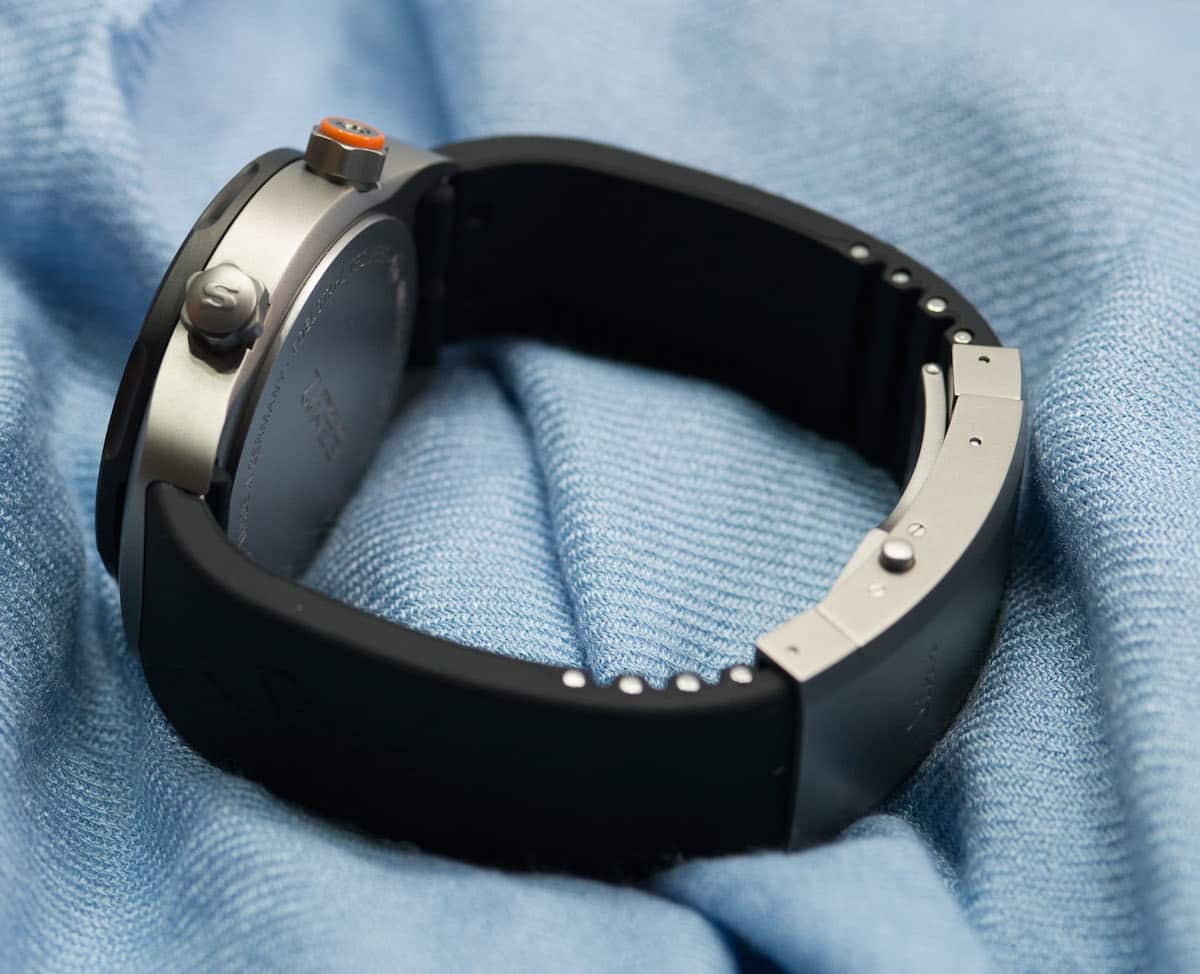 Now, that automotive story I mention may not be the best example of engineering for a purpose, but there was no way in hell that door panel was coming off by accident (something I can’t say for many cars I’ve seen). Hmm…actually, maybe an actual accident would do it. So, how does this relate to Sinn? Sinn may not go overboard on the schrauben, but the brand has a real passion for engineering and making ridiculously robust watches for very specific purposes under the “EZM” banner. Taken directly from the Sinn website,

And even though some of the innovation and focus groups strike many as overkill, I think they make it fun. And with today’s Sinn EZM 12, I think it happens to look pretty good too. 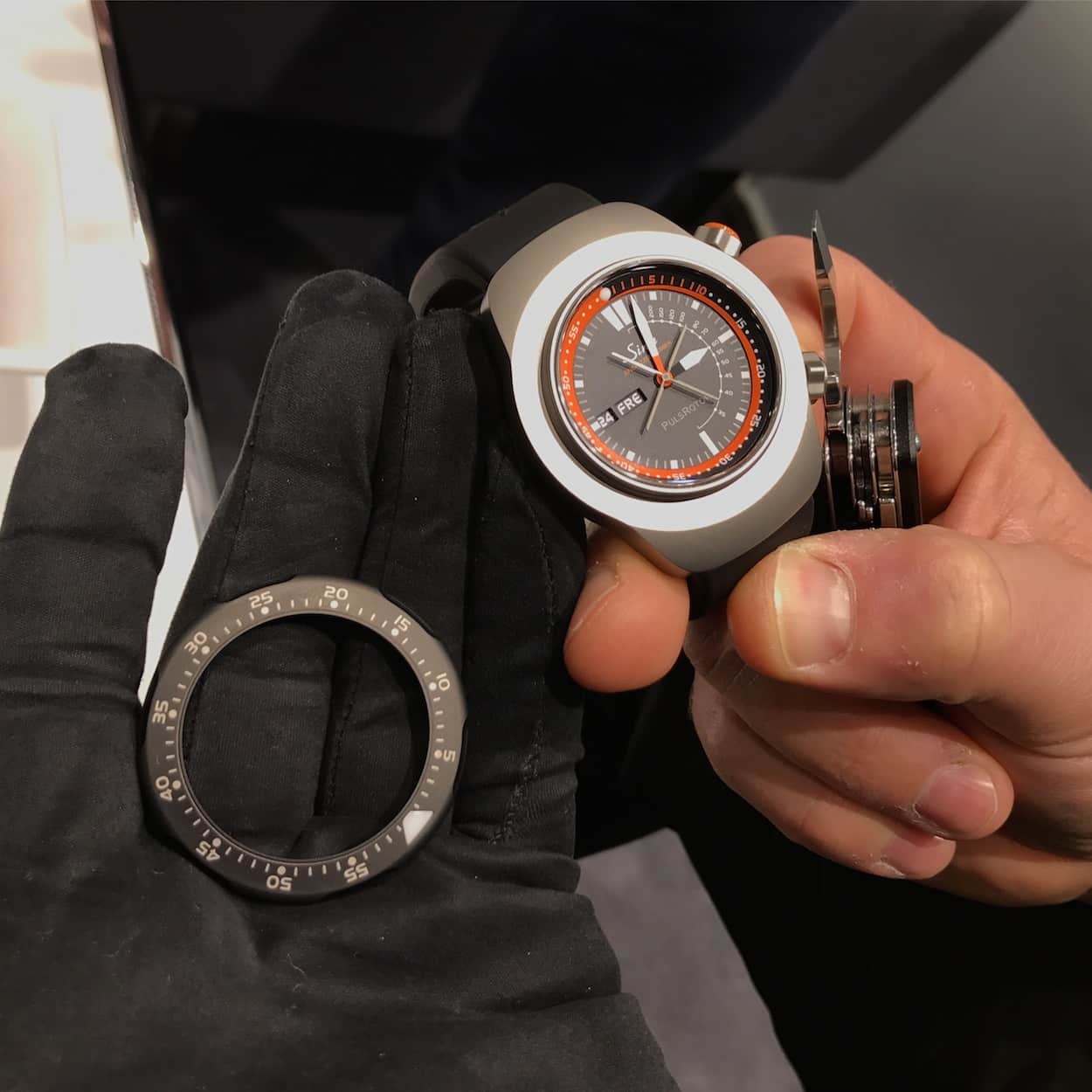 The Sinn EZM 12 debuted at Baselworld in 2017. I still remember the product presentation and was wowed by the refreshingly simple innovation built into this watch. This EZM was and is meant for air rescue workers. Sinn used a one-hour countdown bezel because it’s important that victims reach the hospital within this period. An internal rotating bezel highlights the first 10 minutes because that’s important once a patient reaches the hospital. Finally, that windmill-looking “PulsRotor” is helpful when taking a pulse because it effectively restarts every 15 seconds. 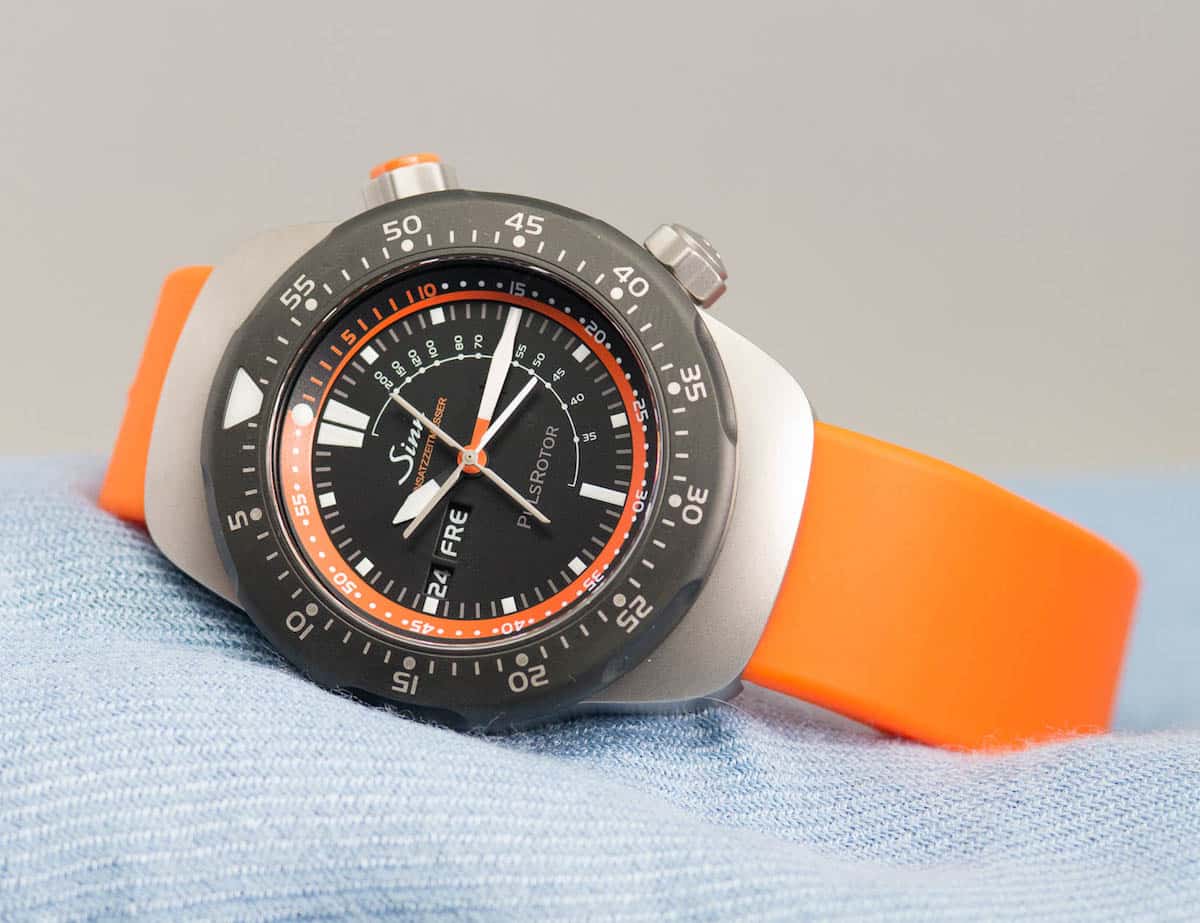 The Sinn EZM 12 is also very easy to keep clean. The bezel can be popped off by using a knife — Sinn even supplies one in the package — and the rubber strap is easy to remove from the spring bars by bending it upwards. Essentially, one can strip this watch down very quickly to clean off whatever it encounters (I would’ve liked this a couple of years back after a doofus sneezed on me in the local S-Bahn). And these days, aren’t we all supposed to be keeping ourselves clean? Heck, I’ve probably washed my hands five times just while typing this! 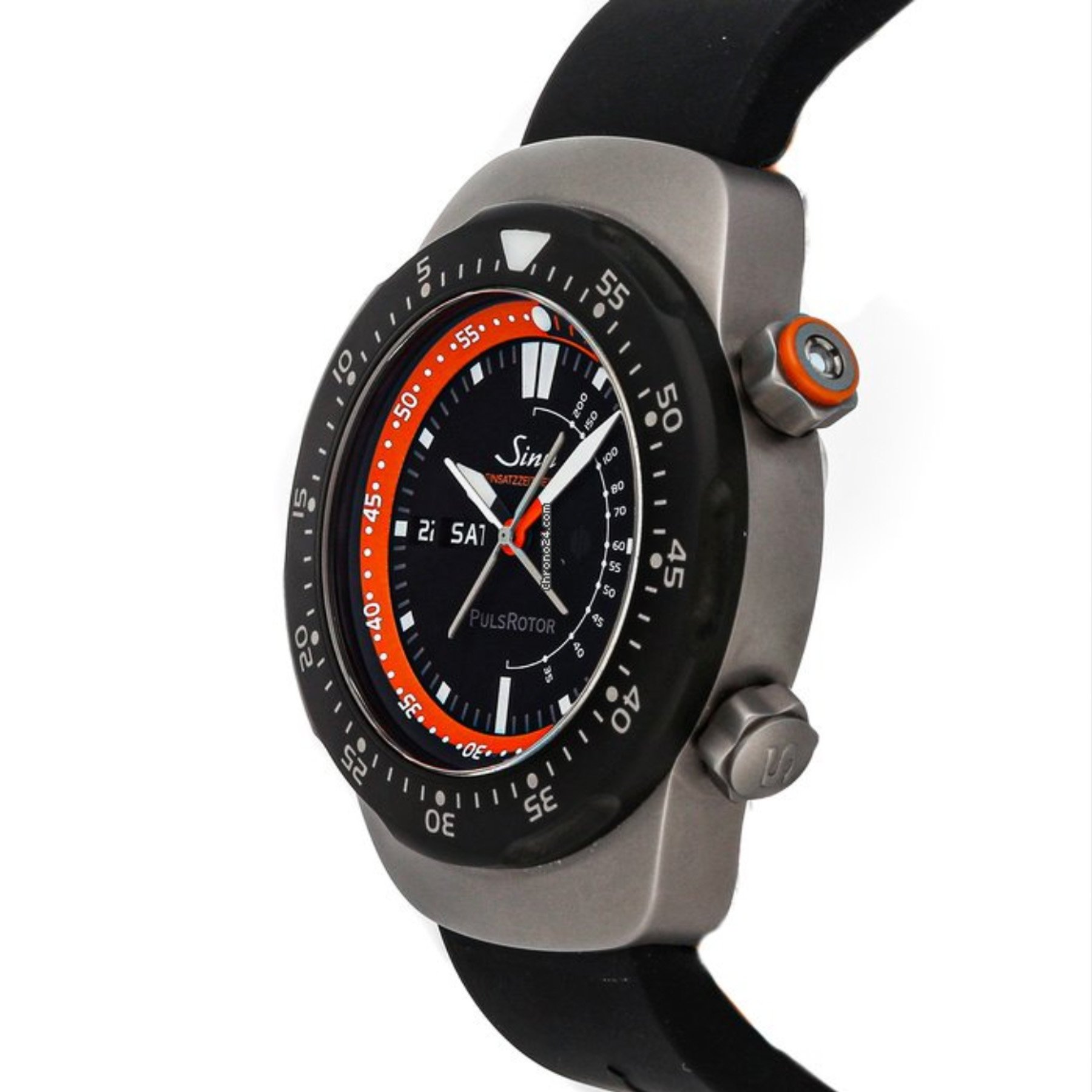 The Sinn EZM 12 uses the ETA 2836-2 automatic with hacking, day-date display. At 44mm and in stainless steel, it boasts 200 meters of water resistance and 80,000 A/m of magnetic resistance. Sinn also adds its own in-house party tricks such as Tegiment hardening on the case and bezel. The little “Ar” dehumidifying capsule makes its way into the upper bezel rotating crown. At 14mm thick, it’s not even as large as one might expect. Finally, critics dig it — especially from Germany. The watch continues to rack up design awards along the way and, if it means anything, I must say that I’m a fan also. 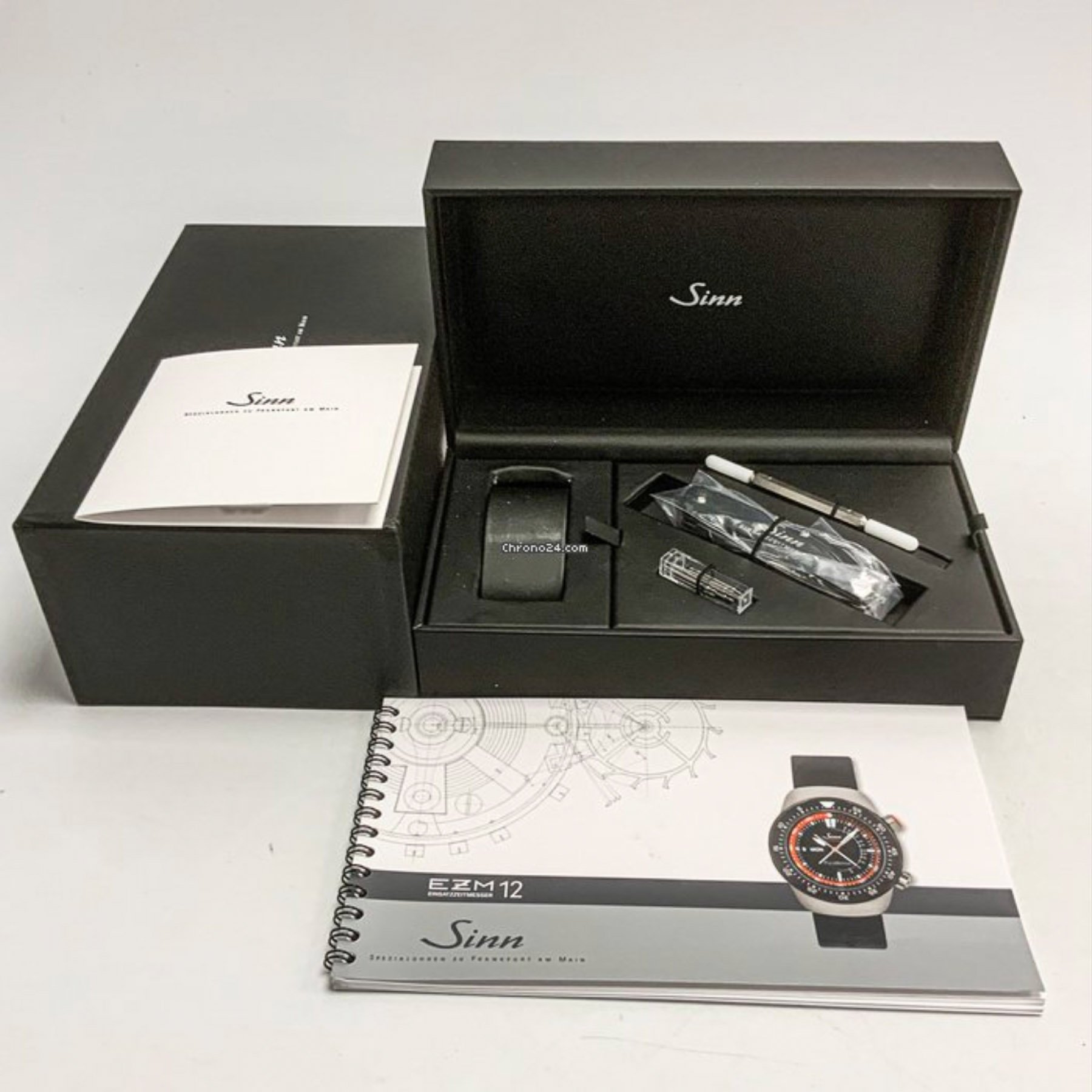 I checked the Sinn site and the watch currently retails for €3,230. That seems pretty fair, but one is available on Chrono24 from the well-stocked seller WatchBox outside of Philadelphia. At €2,527, it’s barely worn and comes complete with box, papers, and tools. The seller offers a few pictures and we’ve combined those with some of our own from back in 2017.

Keeping in mind our current penchant for cleanliness — and let’s be clear, I hope that trend sticks around after Covid departs — and most watch lovers’ interest in innovation, what do you think about Sinn EZM 12?