Will you pay more for less with this €3,250 no date diver?
Michael Stockton
comments 28
Share
Wrist Game
Crying Shame

We’re back with Wrist Game or Crying Shame and this week we take a look at the Longines Legend Diver no date. But first…

Last week, we featured another twin crown diver (that’s blatant foreshadowing) with the IWC Aquatimer Cousteau Divers. Despite its rough and semi-ready appearance, apparent mechanical foibles, and overt branding, the watch resurfaced with a 71% Wrist Game win. As I hinted above, we’re staying the course on our underwater voyage. This time, we go retro with the Longines Legend Diver No Date. 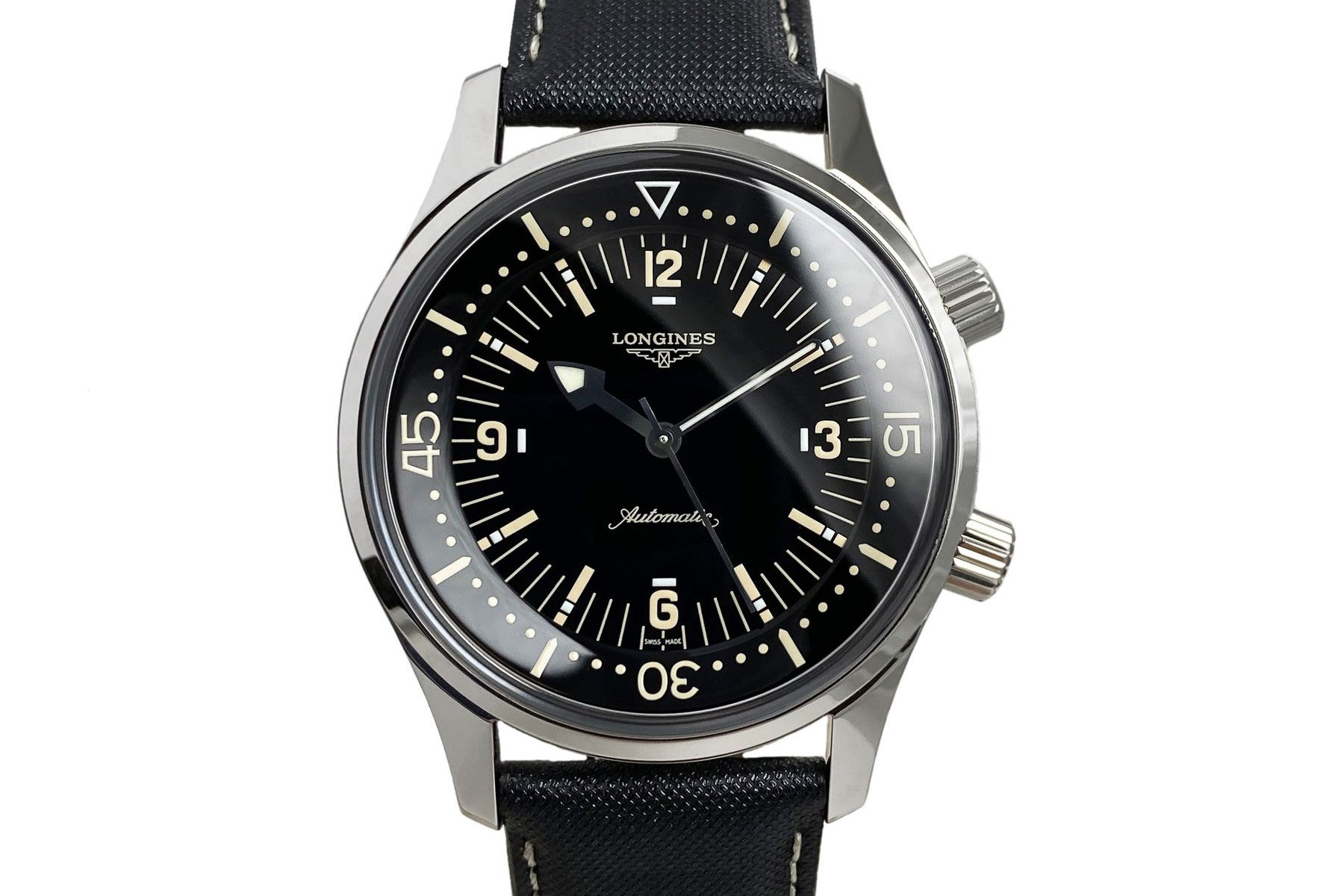 The Longines Legend Diver No Date

The Longines Legend Diver No Date first came ashore back in 2007. Thinking about it, that’s a hell of a long time ago! For the youngsters out there, this watch, which was a nearly identical copy of a 1960’s Longines model, was one of the earlier mainstream reissue pieces. Yes, there were others well before this watch from other brands, but I actually think that this watch, as part of the brand’s Heritage line, helped kick things into full swing. 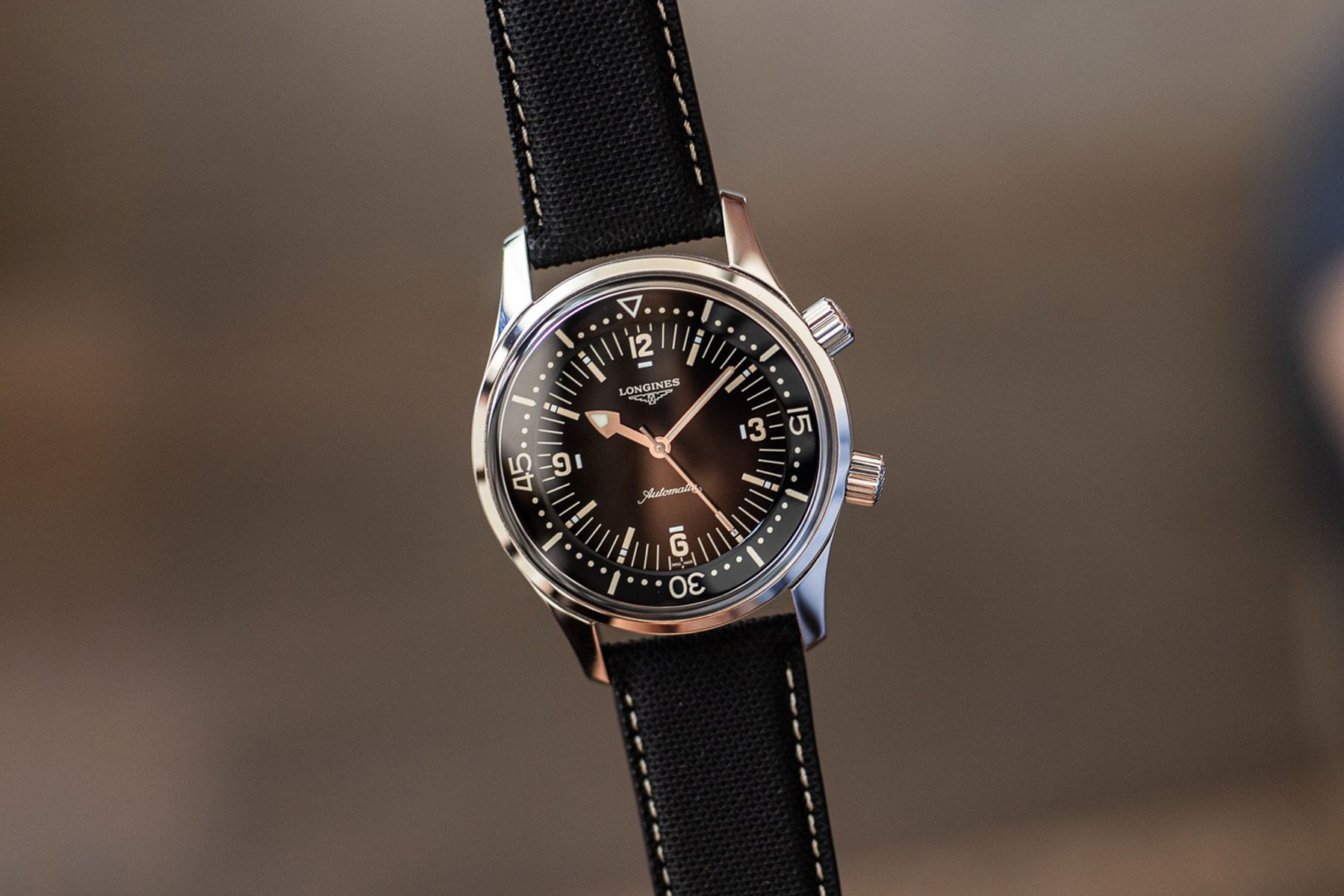 The Longines Legend Diver No Date was extremely faithful to its ancestor. That meant a 42mm stainless case with the looks of a twin crown EPSA Super Compressor. This meant that it had a lower crown for time setting and winding and an upper crown to rotate the internal dive bezel. Other things were kept in place such as the 22mm wide lugs and deceivingly gargantuan 50mm lug to lug. For the sake of modernity, some changes were made. The crowns are screw-down, the domed crystal is sapphire, and the case back is screw-in versus a bayonet. Also, an ETA 2824 automatic provides power. 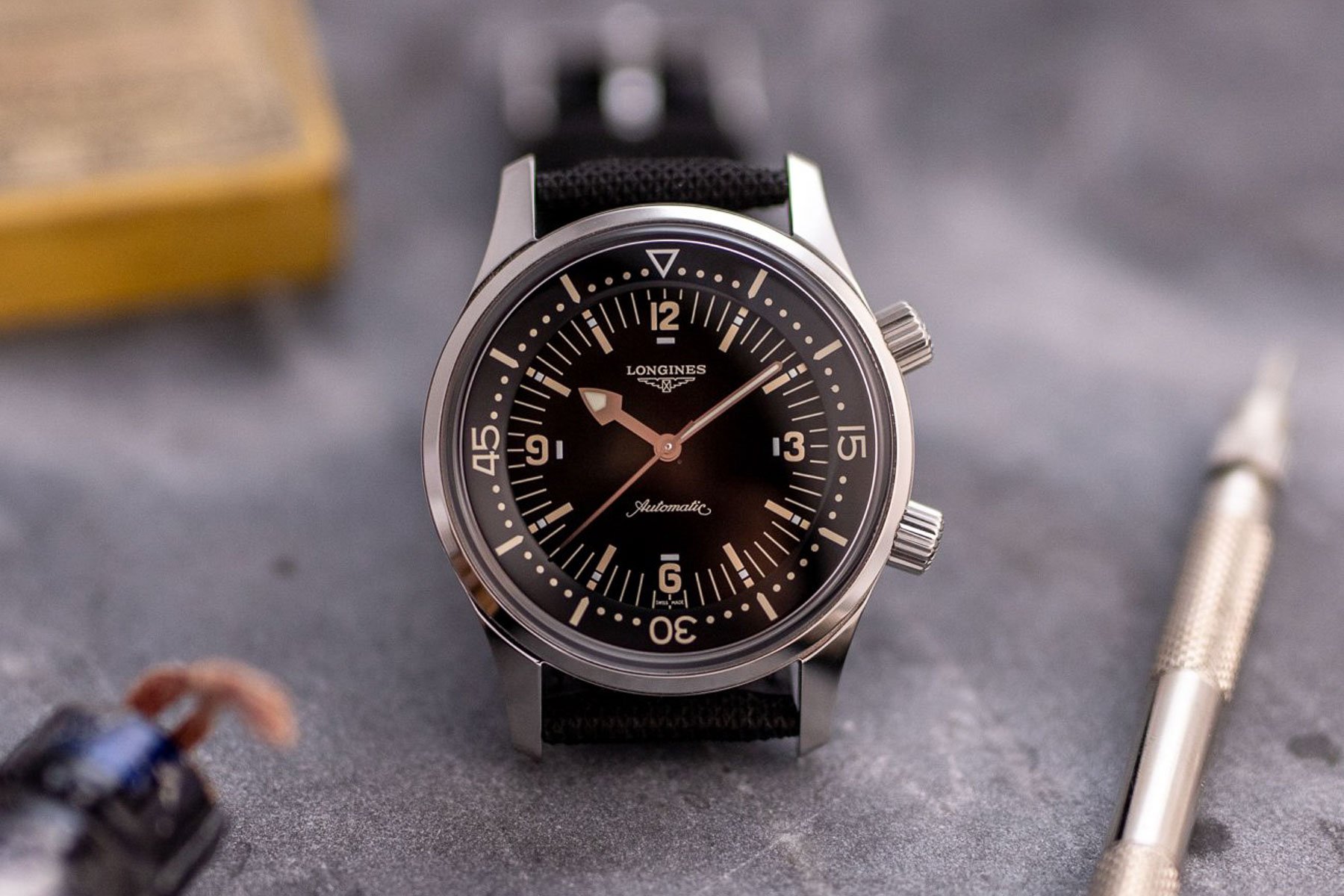 A bit of personal experience

I can’t recall where I was living, but I made my way back to see my parents for the holiday. My Dad and I were out in the garage with a beer — as we do — and he had a new Longines Legend Diver No Date on this wrist. Now, my Dad has a knack of finding “neat” watches and I think that this one qualifies. We’ll get to why in a bit. But back on topic… I think my Dad bought this around 2011 and that coincides with the gradual cancellation of the model. He must have read this and went on the hunt. What he found was that Topper Jewelers bought a mother lode (ironically, they’re in California) of these No Date models and had them on sale for something like $1,400. And so a sale was made. 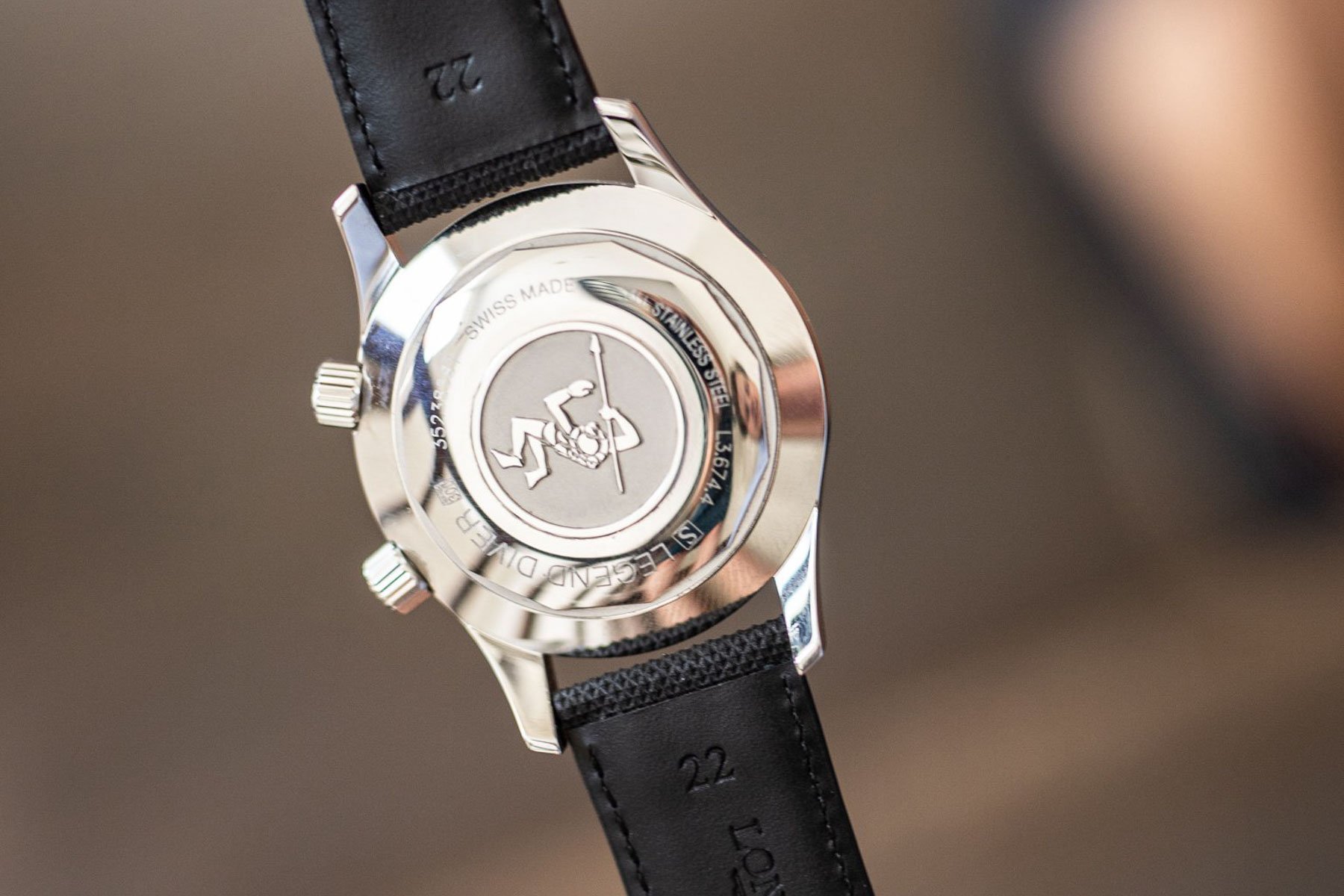 Curmudgeons and their (lack of) buying

When it comes to watches, it’s really easy to make comparisons to cars. Some call it trite, some people are just cranky about everything, and some, like me, just don’t care. So yes, here comes another parallel with our four-wheeled friends. I read a lot of auto news and when a new car debuts, the “purists” always complain when there’s no three-pedal option. However, the reality is that no one buys a proper manual these days (Mazda Miata aside) and even the purists are probably driving old things with no intent to buy. The same goes and apparently went with the Longines Legend Diver No Date.

People always want to see a watch without a date or with a manual movement, but the truth is that these watches just don’t sell. Well, they don’t sell in the type of numbers that make sense for a massive brand like Longines. So, in the 2011-2012 timeframe, the Longines Legend Diver No Date gave way to the current Date version. RJ wrote an article about that here way back in 2013. By the way, it does seem that the “No Date” lived on for a while longer in Japan — the land of limited eccentric items — because I saw them in department stores in 2014. Not buying one was a mistake, but I had gone overboard on JDM Seiko that trip. 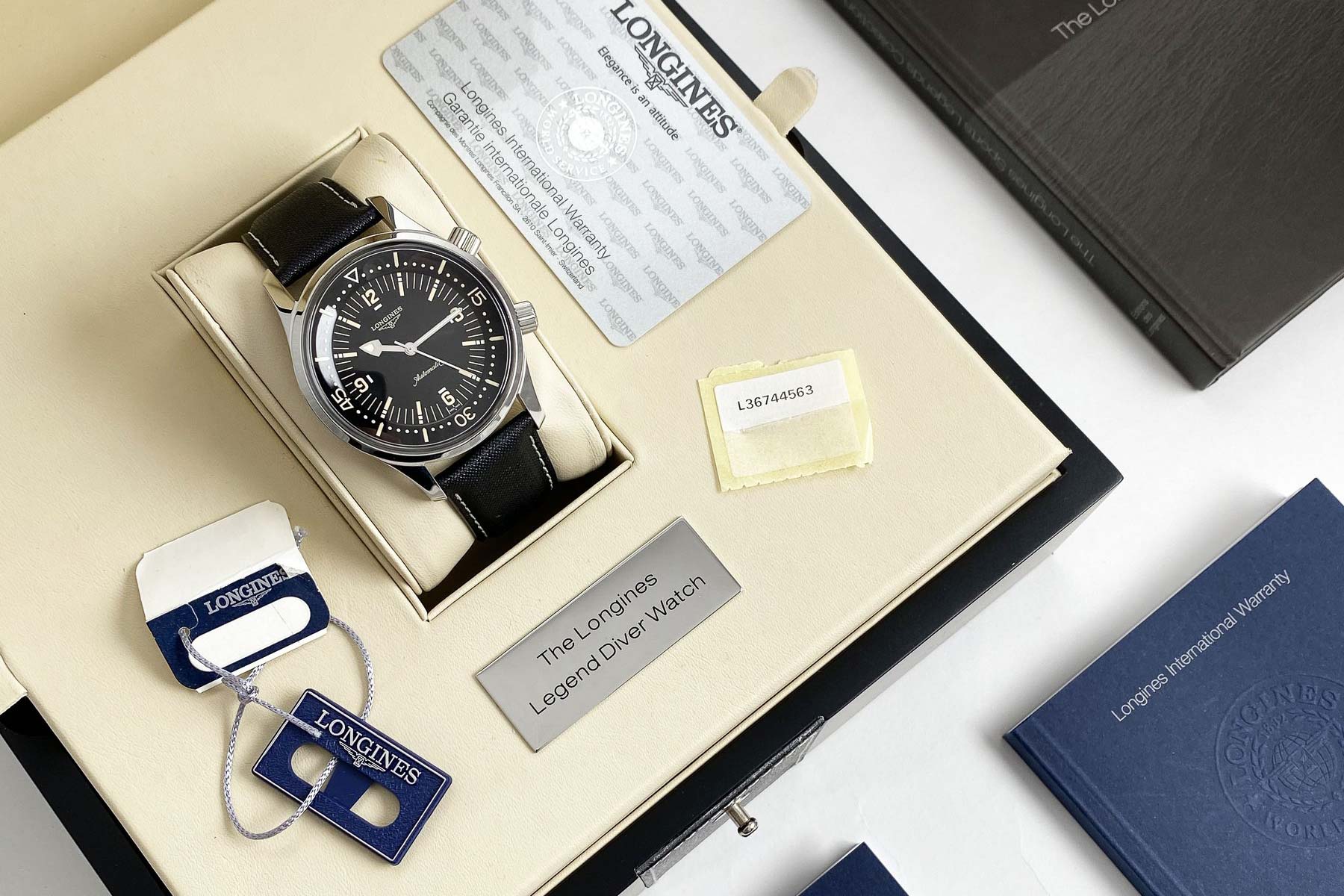 The market and today’s candidate

Unsurprisingly, the secondary market has embraced the Longines Legend Diver No Date. And therefore, the days of $1,400 prices are long gone. For reference, the current Date version lists for roughly €1,800 on rubber. Today’s No Date, though, is the least expensive piece I found on Chrono24 and it’s a full set. It also happens to cost €3,250. The lovely pictures (they are great) and the watch come from seller Mr. Watchley out of Ghent, Belgium (their site lists the watch at €3,150). When you’re thinking about this watch, go have a gander on the internet to look for other pieces. You’ll be surprised about how few you actually find.

And with that, now it’s time to vote on the Longines Legend Diver No Date. Are you one who actually buys these unpopular watches and feel that this now deserves a premium?  Or, do you think otherwise?