Would you take the bull by the horns on this Bullhead for €6,857?
Michael Stockton
comments 29
Share
Wrist Game
Crying Shame

Wrist Game or Crying Shame returns with a look at the Omega Seamaster Bullhead, a kooky chronograph from one of our favorite brands. But first…

Last week, we went double pusher with the Oris Chronoris 2005 Replica Edition. This rather lovely symmetrical chrono walked away with a startling 80% Wrist Game win. This week, we keep things extremely uniform with the Omega Seamaster Bullhead. Now, it was apparently one Winston Churchill who stated that, “if you can’t dazzle them with brilliance, baffle them with bull.” On that note, let’s see just see how brilliant this Bullhead is! 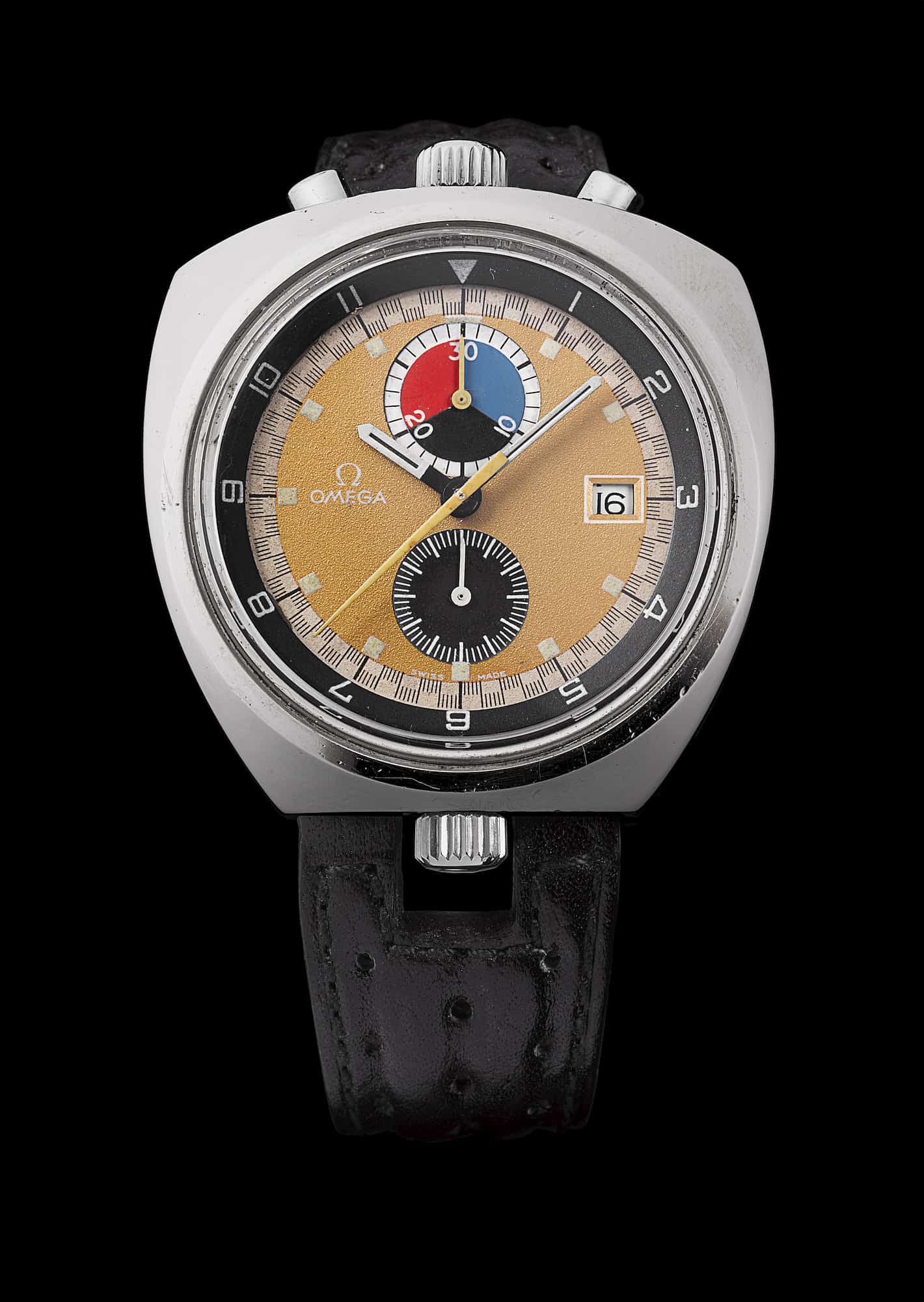 It was way back in the feel-good year of 2013 that we first caught wind of the Omega Seamaster Bullhead. Omega launched the watch at a Baselworld that was brimming with confidence. Who knew that a pandemic wouldn’t end up as the show’s hangman less than a decade later. Nope, chums, its chronic illness would be hubris alongside 2000s WiFi and exorbitant pricing. But I do digress and while picking on the show is fun, we’re here to talk about one of the more interesting chronographs in the last ten years. 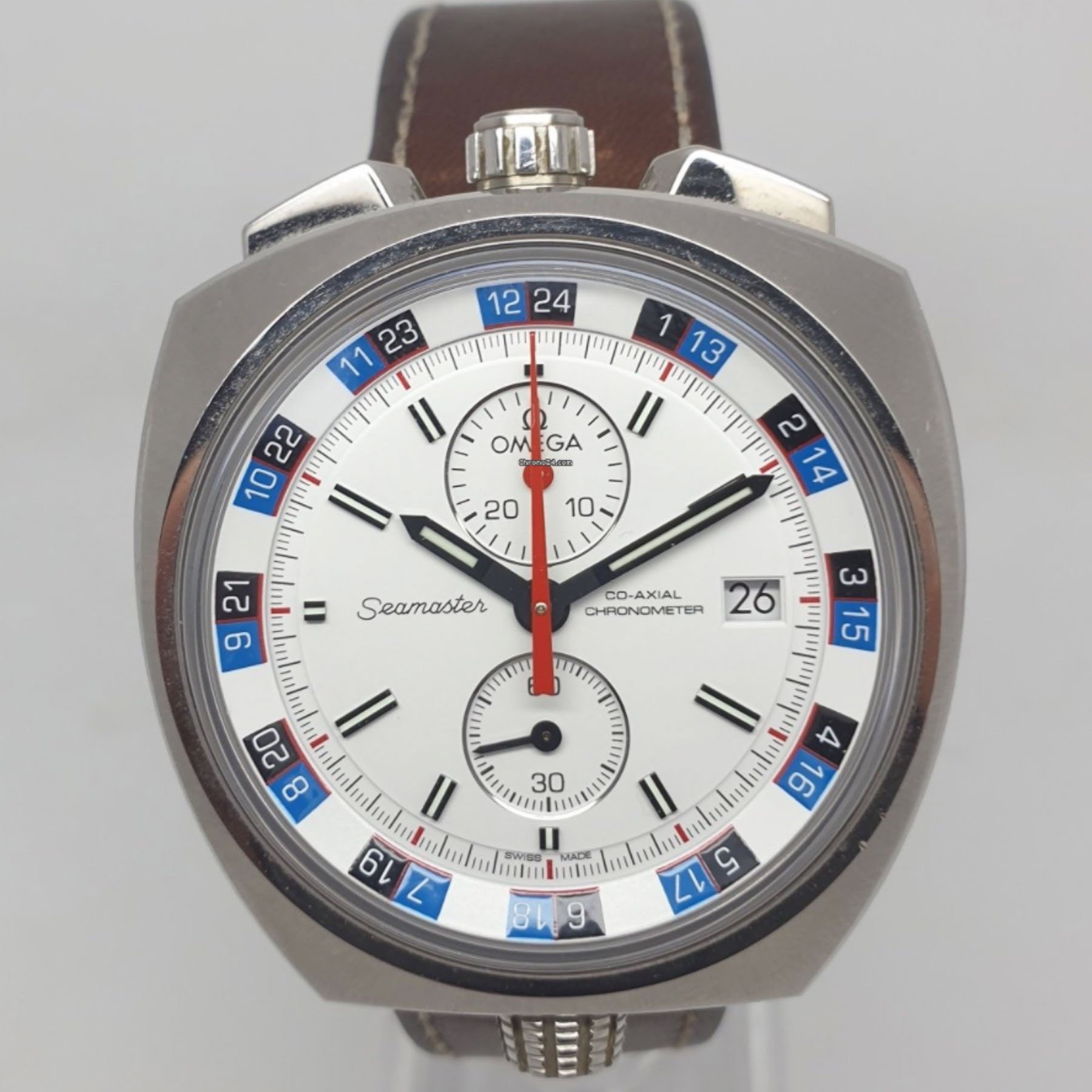 You’d have to travel all the way back to 1969 when the first Omega Bullhead (reference 146.011) was released. It was a wild 42mm chronograph featuring a hand wound caliber 930 movement. The watch obtained its nickname due to placement of the crown at 12:00 and a pusher on either side. If you’re a Texas fan, one look would arouse a yell of, “hook ’em horns!” It’s a neat old watch. These watches were made for driving, but I wouldn’t use a bullhead in a bulldozer. No, silly, I’d sport it in a sports car. With your left arm on the wheel, you have a perfectly upright view of your fine Omega chronograph. Unfortunately, these old ones are tough to find and they usually hover around the €10,000 mark. 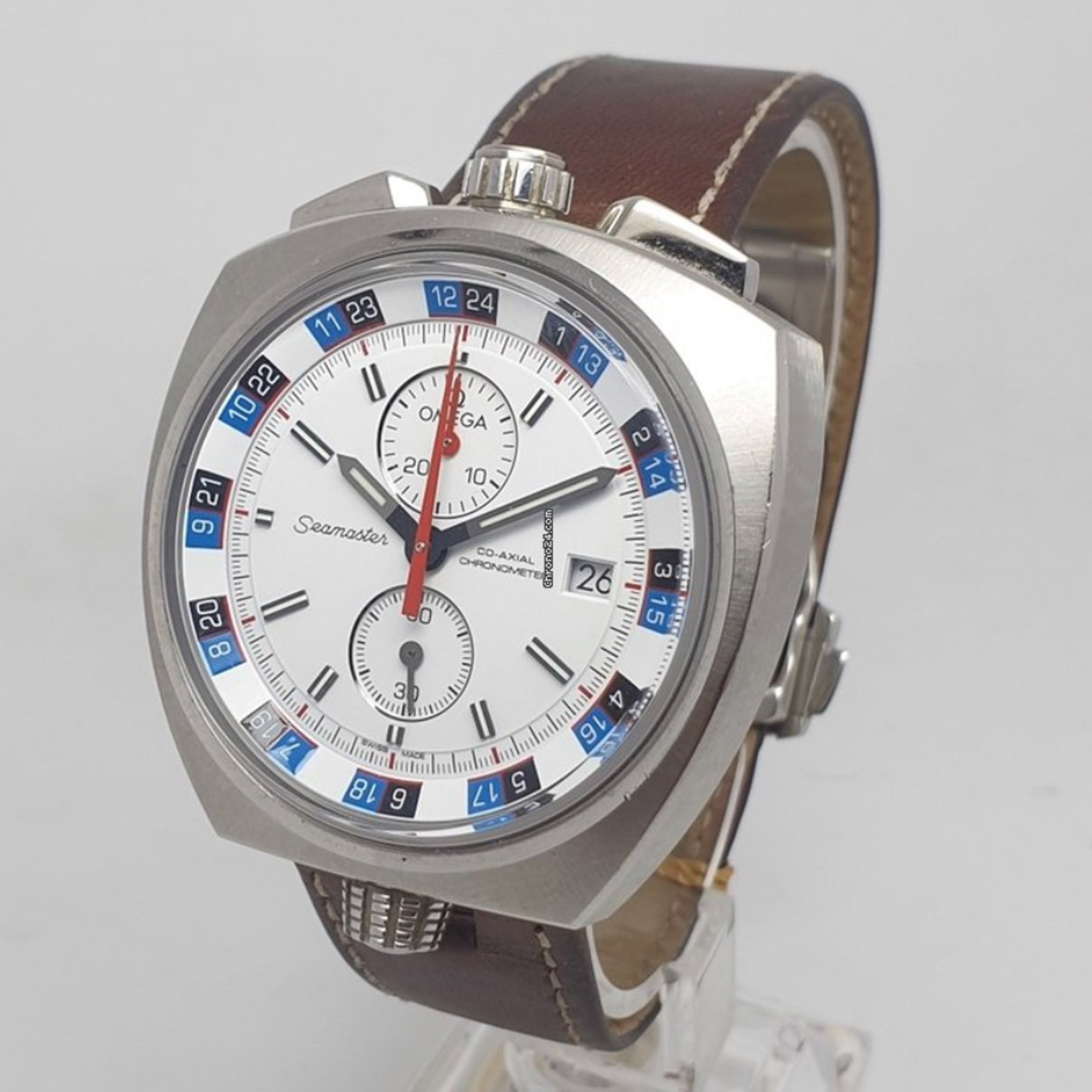 But if riding or rocking a Bullhead is your sort of rodeo and vintage isn’t your thing, the 2013 models just might be for you. Omega came out with three different Bullhead models at the time. The watches came in at 43mm and use the Co-Axial automatic chronometer reference 3113. It has a date at 3pm like the original and a crown at 6 o’clock for a rotating internal 12 or 24 hour bezel. The watches were all steel, good down to 150m, and Omega gave buyers the choice of a black dial, silver dial, or today’s white dial with vintage soccer timer style bezel. I believe each was made in a series of 669 numbered pieces and they were pretty darn pricey at €8,290. Later, a classy white and blue model emerged for the Rio Olympics. Of note, these bovines had some real bouef on the hoof with over 14mm of thickness at the tooter and more than 15mm at the rooter. 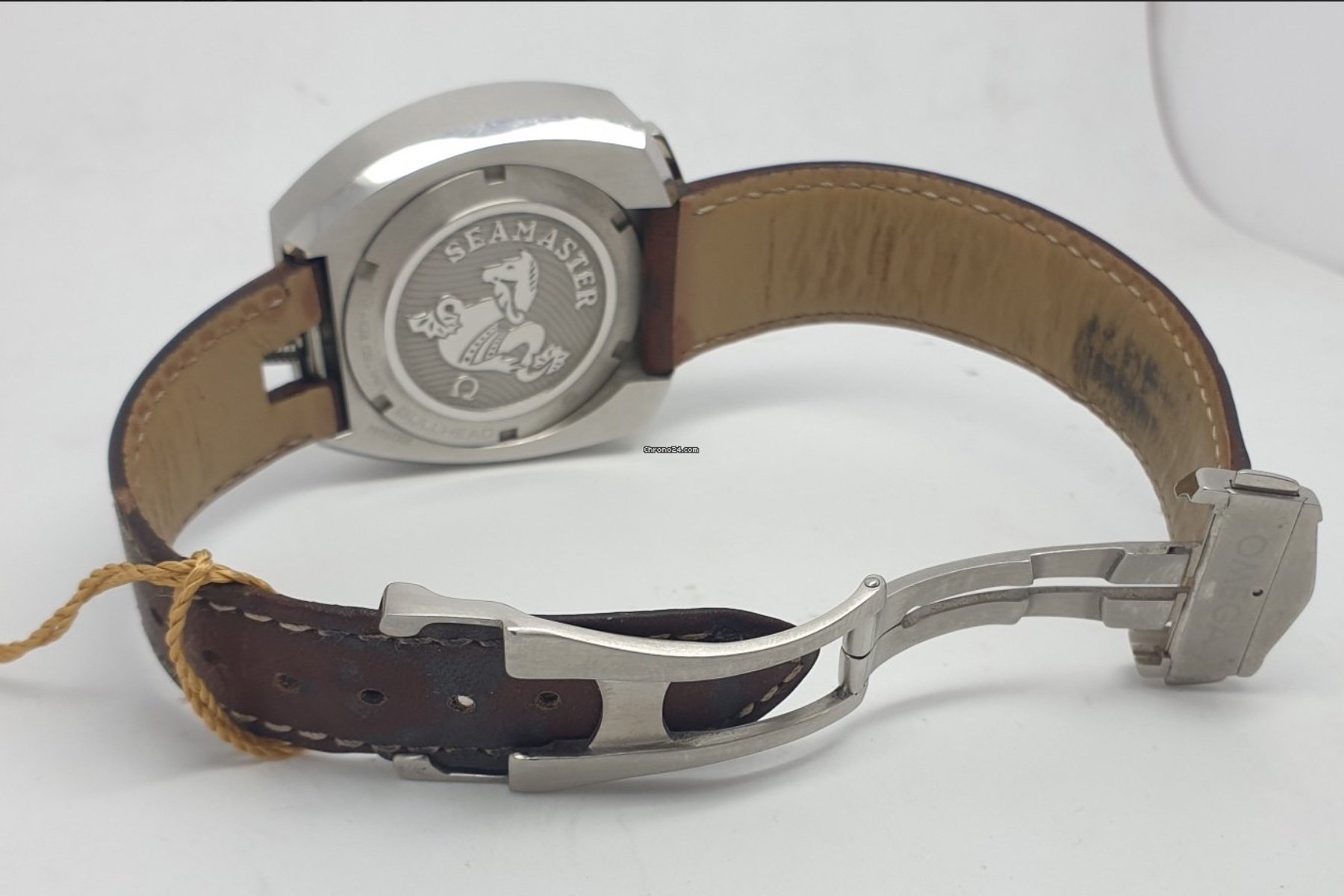 Now, I think that the Seamaster Bullhead is one attractive, tough, and commanding watch, but it sadly ended up more like the character Ferdinand. What I mean is that more often than not it ended up sniffing the flowers within the display case versus heading into the ring. Blame high prices, a fairly awkward case design, and —hmm — let’s say high prices again for lackluster sales. It also exemplifies why the Bullhead simply isn’t the layout of choice for a chronograph. I own a vintage Seiko version and I really like it, but it is weird and I wear it exactly never. 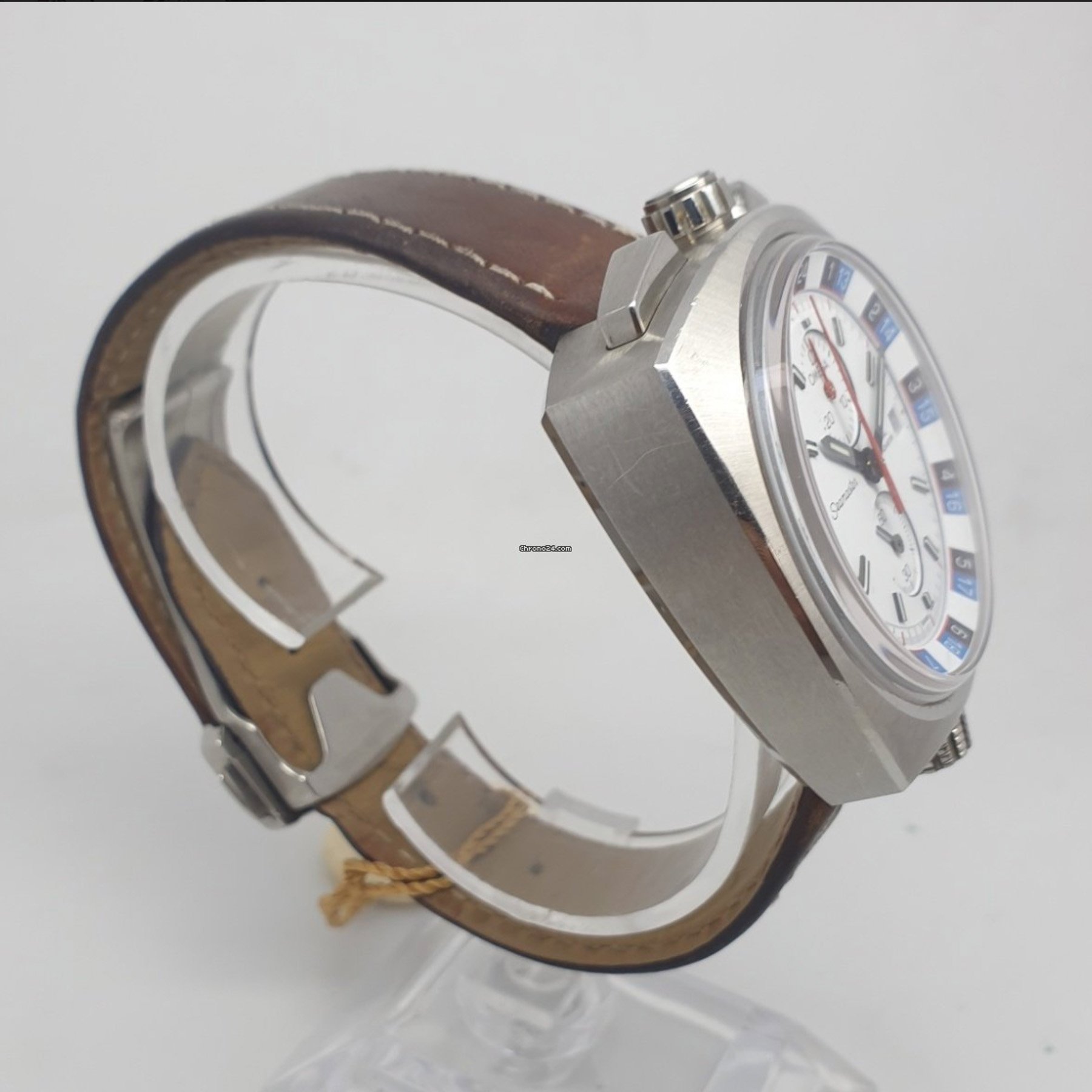 Still, check out this Seamaster Bullhead and tell me it’s not worth trying? It’s a later Omega and that means that the finishing is tops. It’s also not your everyday premium chronograph. Sure, it’s sporty, but I think it’s pretty classy. And hell, if you’re traveling these days you’re probably piloting a car, so it’s even useful. But perhaps the best thing about these newer Omega models is that they’re available at a fair discount versus the original retail price. They’re certainly not cheap, but they seem to have bottomed out in the €6k plus range. 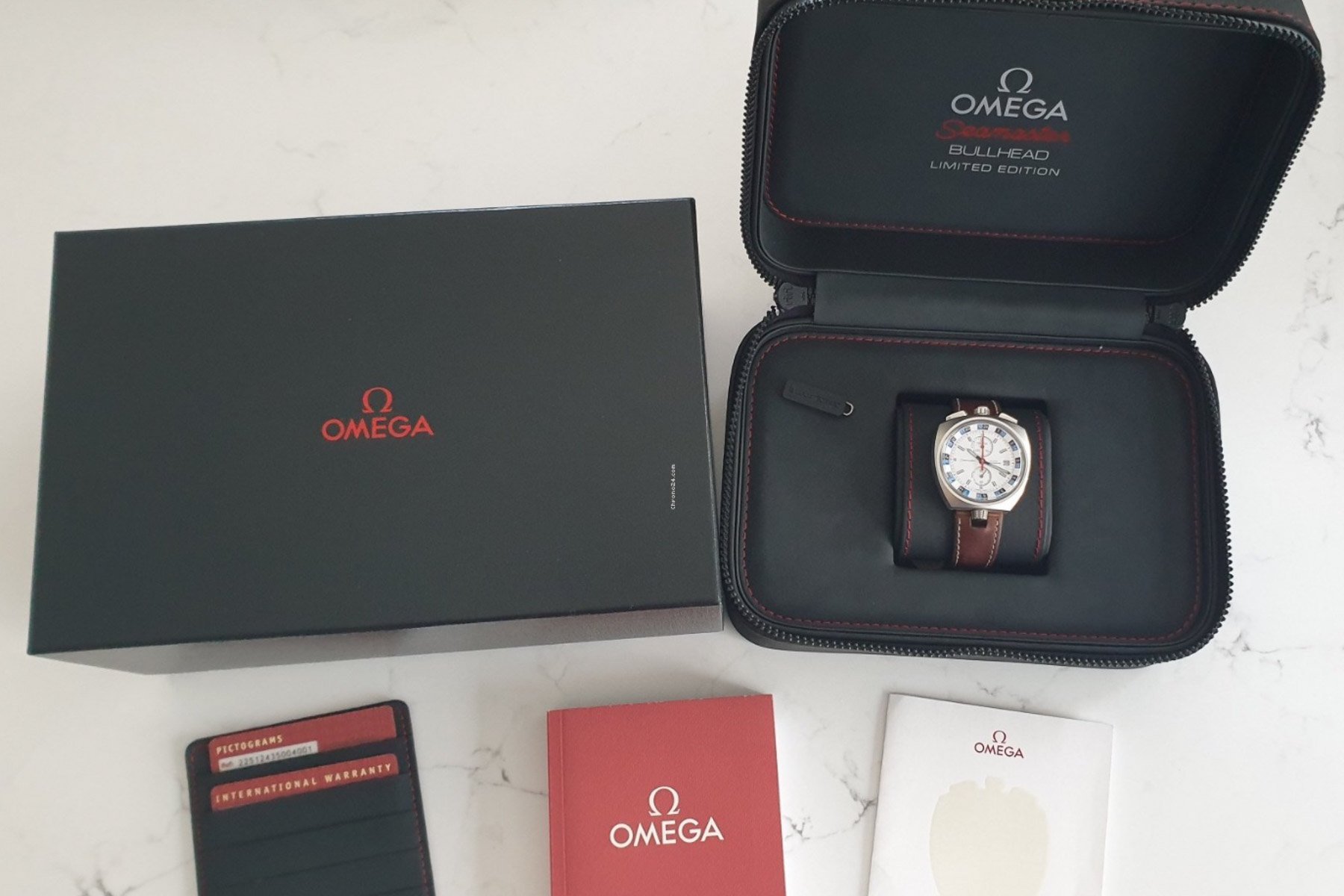 Today’s Bullhead resides in the fair town of Shrewsbury, England. WT Time Pieces owns the photos and the listing comes to us via Chrono24. When I look for examples on sale, these soccer timer versions seem to be the most desirable and I must say that I like the colorful scheme. As you can see, it comes with all its original trappings. The price is €6,857 and as I said, that’s not cheap, but it is different. And with that, it’s time for you to vote.

Hot Topics
Laventure Automobile Chronograph With A Proprietary Movement — Marking A Huge Leap Forward For One Of The Industry’s Most Promising Brands
155 comments
We Talk To Swatch Group CEO Nick Hayek About The MoonSwatch
85 comments
Fratello Exclusive: An Inside Look At The MoonSwatch Production Facilities
75 comments
Selling Your Watch To A Dealer Or Trading It In — Tips From A Former Watch Dealer
49 comments
Summer Splash — Round 2 : Jorg’s Tudor Pelagos FXD Vs. Lex’s Hublot Big Bang Integral Ceramic Sky Blue
48 comments
Popular
Top 10 Rolex Watches – Overview of Models Favoured By Our Readers
Fratello
22
An Overview Of All Omega Speedmaster Apollo XI Models
Robert-Jan Broer
17
(From The Archives) Shut Up & Read The Truth About Cartier Watches
George Cramer
21