The first Frenchman shot into space was Jean-Loup Chrétien, and on his wrist was a Yema Spationaute 1. The watch was designed in 1982 in collaboration with France’s Space Agency (CNES). That same year, the Soyuz T-6 mission carrying two Russian cosmonauts plus Chrétien was shot out of the earth’s orbit to board the Salyut 7 space station. Chrétien returned to Earth after spending 7 days, 21 hours, 50 minutes, and 42 seconds in space. The Soviet mission made him the first Western European man in space, and it made the Yema Spationaute 1 the first French watch in space. Forty years later, Yema officially renews its connection with space and launches the Yema Flygraf French Air & Space Force GMT Steel Limited Edition.

While Chrétien was aboard the Salyut 7 space station, he performed echography cardiovascular monitoring system experiments. But in 2019, when French President Emmanuel Macron announced the creation of the French Space Command, he wasn’t talking about doing science experiments in space. No, he was talking about arming French satellites with lasers to shoot down enemy missiles. As a result, in 2020, the French Air & Space Force — the AAE that stands for Armée de l’Air et de l’Espace — was born. The start of that combined fighting force marks the launch of a new collaboration with Yema through the release of a new collection of military tool pilot’s watches. 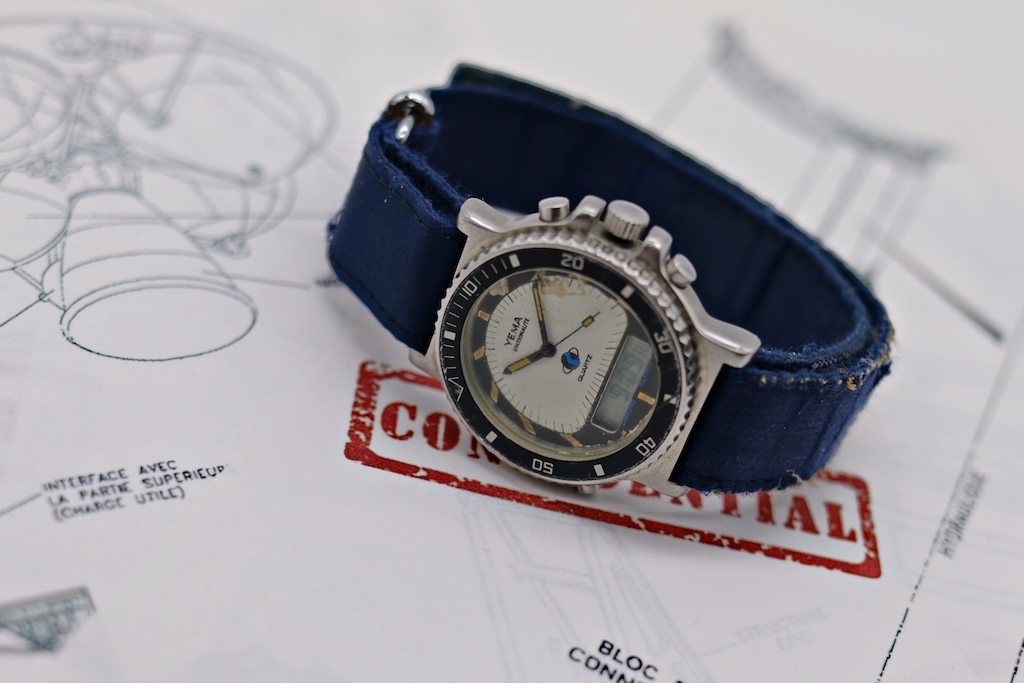 Technically, the Yema Flygraf French Air & Space Force GMT Steel is not a space watch. The self-winding rotor is better suited to the gravity of Earth, so instead, this is a tool watch for the French military. And the Morteau-based brand Yema has a close connection with the country’s armed forces. The first Yema French Air Force tool watches were issued back in the 1970s to equip the Air Force Diver Rescuers team during helicopter-borne sea rescue missions. Later on, fighter pilots started using these watches. It made the Yema Superman a unique SEA-AIR military tool watch. The new military Flygraf tool watches are designed with fighter pilots in mind. They’re not for people like Jean-Loup Chrétien the spaceman, but for people like Jean-Loup Chrétien the fighter pilot — the role he fulfilled before flying out of the atmosphere. 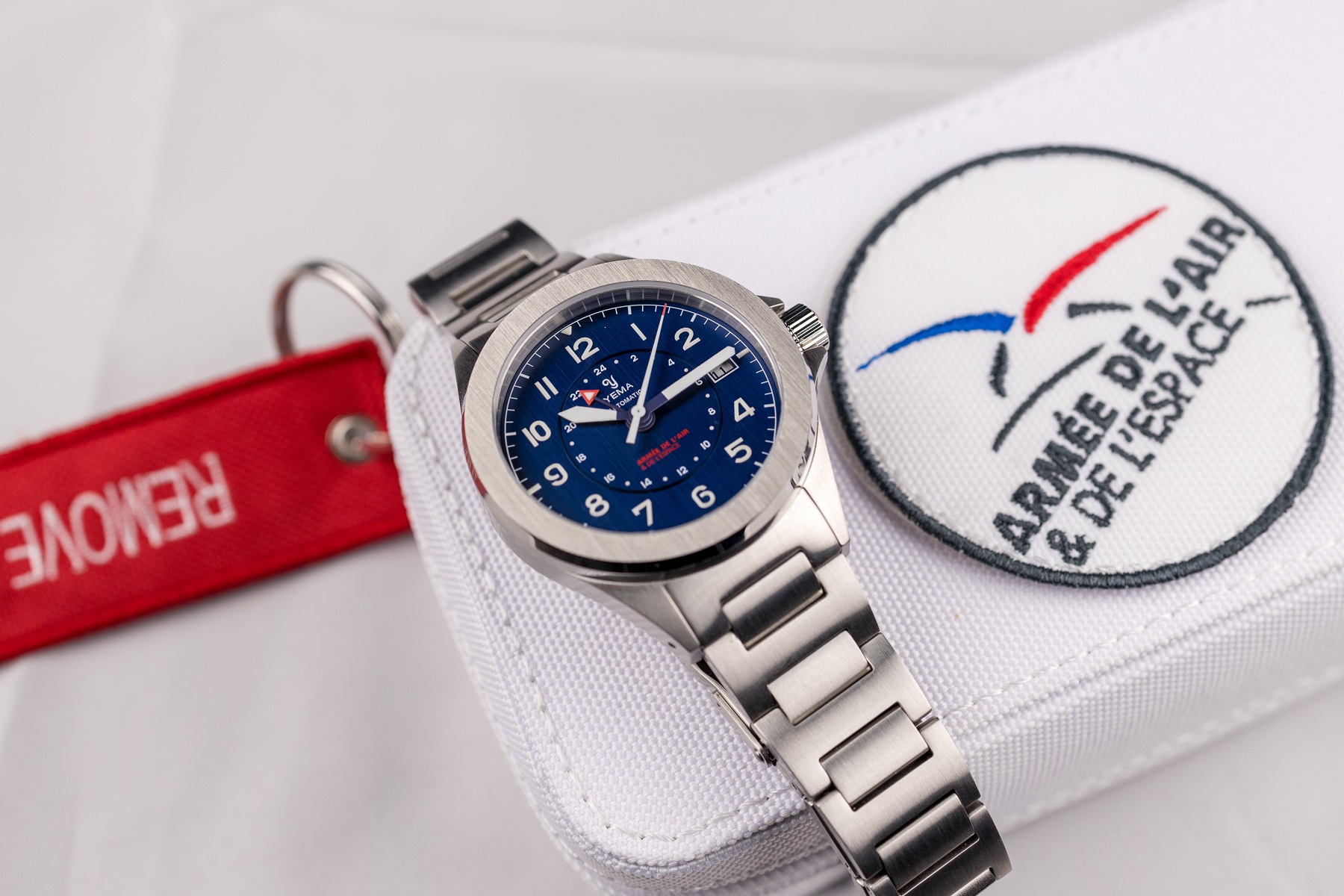 When I took the new Yema Flygraf French Air & Space Force GMT Steel out of its really cool fabric box with removable Armée de l’Air et de l’Espace patch, I experienced a bit of déja vu. The new Flygraf GMT borrows its looks from the Flygraf Pilot M1 Field Watch. But I also couldn’t help reminiscing about another model from the collection. Last year, Yema presented a special Navygraf in association with the Marine Nationale. And inside that limited edition GMT watch beats the proprietary automatic caliber YEMA3000.

This movement, which debuted in 2021, was designed, developed, and assembled by Yema watchmakers in the French Jura mountains. It claims an average accuracy of ±10 seconds per day and has a 42-hour power reserve. It is also the movement that powers the new Yema Flygraf French Air & Space Force GMT Steel Limited Edition. You won’t see it though because it hides behind a solid case back with the AAE logo that’s embossed with a hydraulic press. 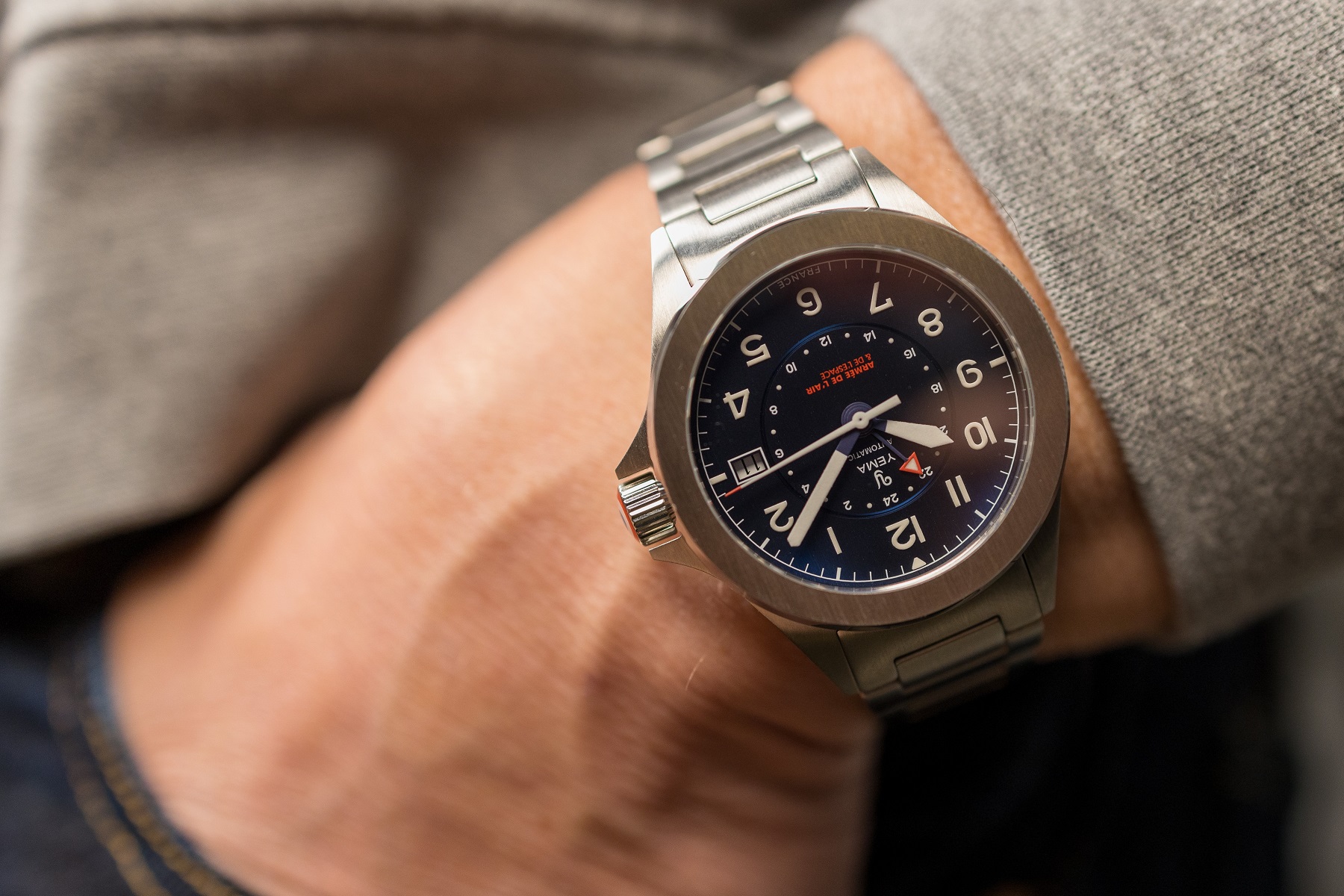 The Yema Flygraf French Air & Space Force GMT comes in two versions that are both limited to 500 pieces. There’s the sinister black steel version with a black dial and bracelet, and there’s the more conventional steel model with a blue dial. We had the latter model on a bracelet at Fratello HQ, without the official “space strap” that you get as an extra. This included 19mm two-piece gray nylon strap has the French Air & Space Force logo with a Velcro closure so you can wear it over your flight suit. Remember, this watch is an automatic pilot’s watch, not a gravity-defying astronaut’s watch. 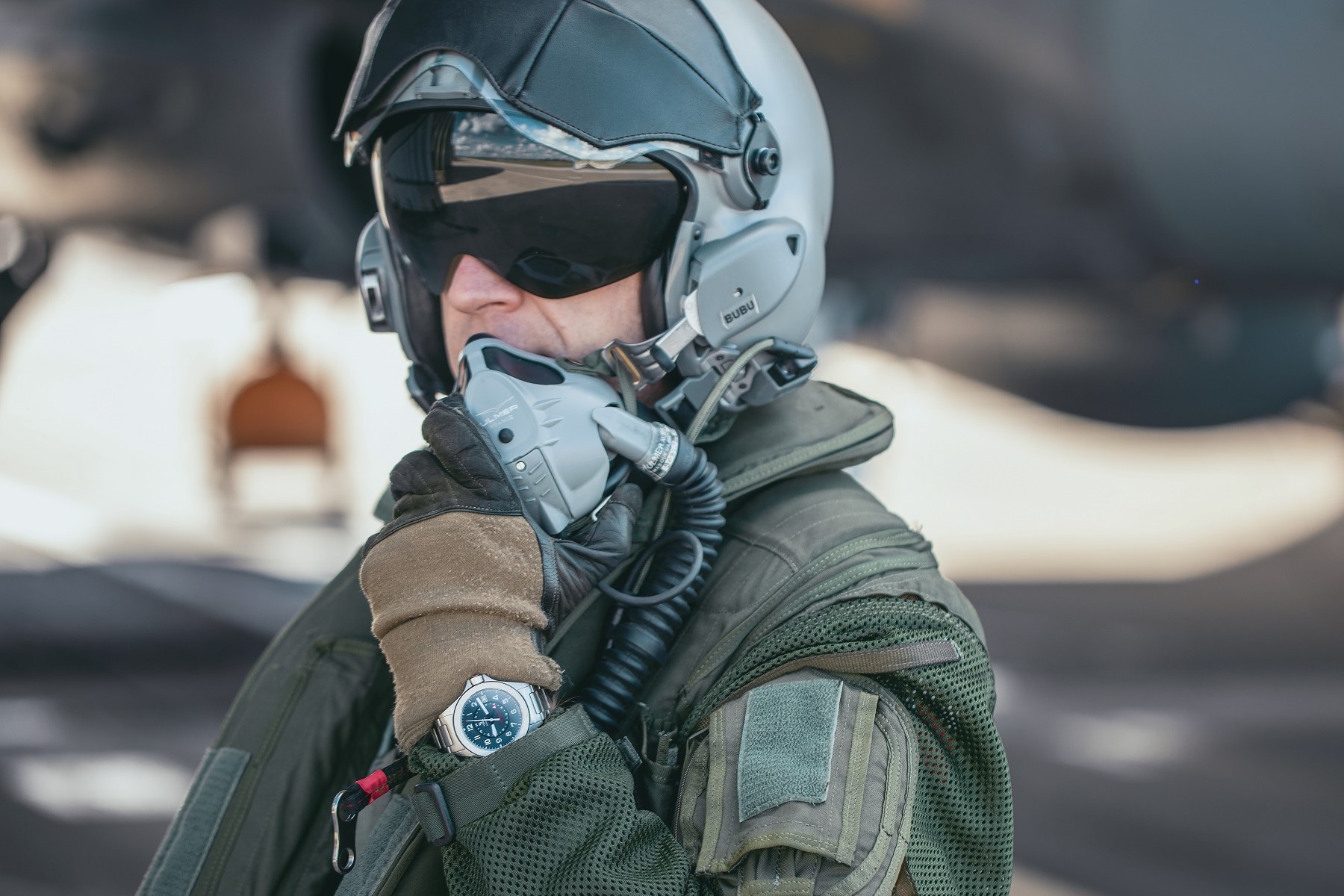 A muscular and understated travel watch

The main reason I initially recalled the Navygraf was due to the similar case dimensions of this Flygraf GMT. My hands and my wrist remembered the 39mm 316L steel case. The Navygraf was slightly thinner, at 12.85mm thick, instead of the 13.75mm thickness of this watch. But the slightly beefier proportions and the vertically brushed bezel give this new Flygraf a sturdy and muscular look. The 24-hour indications are placed on a slightly lowered center dial. It gives the Flygraf the appearance of a field watch, rather than a high-flying, timezone-defying travel watch. But make no mistake, it certainly is the latter. The 24-hour hand with its red triangle might be small, but it does a good job of telling you exactly what time it is in the selected second timezone. 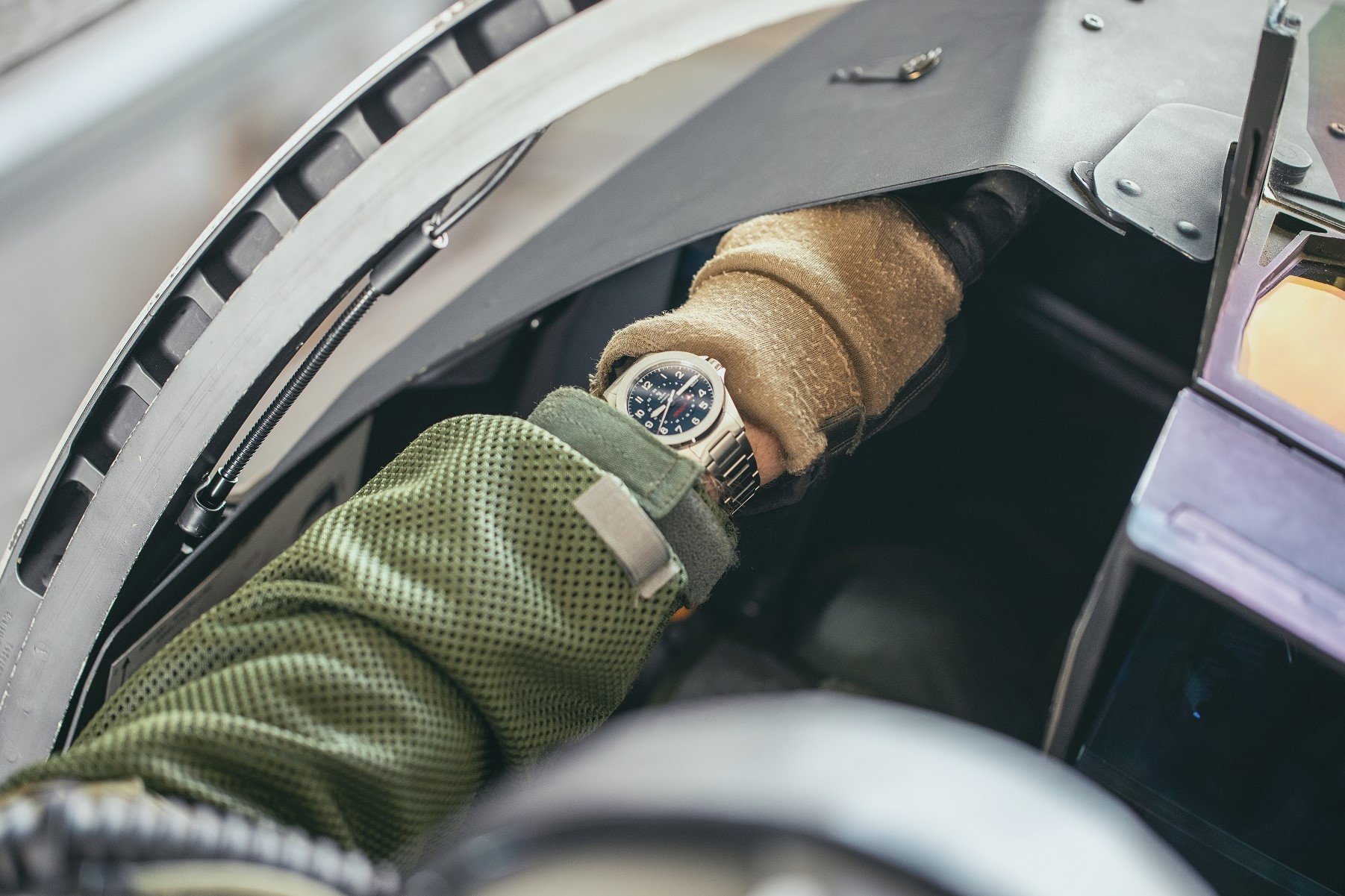 The folks at Yema have an excellent taste in blues. The Navygraf taught me that much, and the Flygraf French Air & Space Force GMT Steel proves it once again. It’s a dark midnight blue that sometimes almost looks black. Closer inspection reveals the dial has a vertically brushed finish. Yema added this to mimic the look of a military aircraft fuselage. 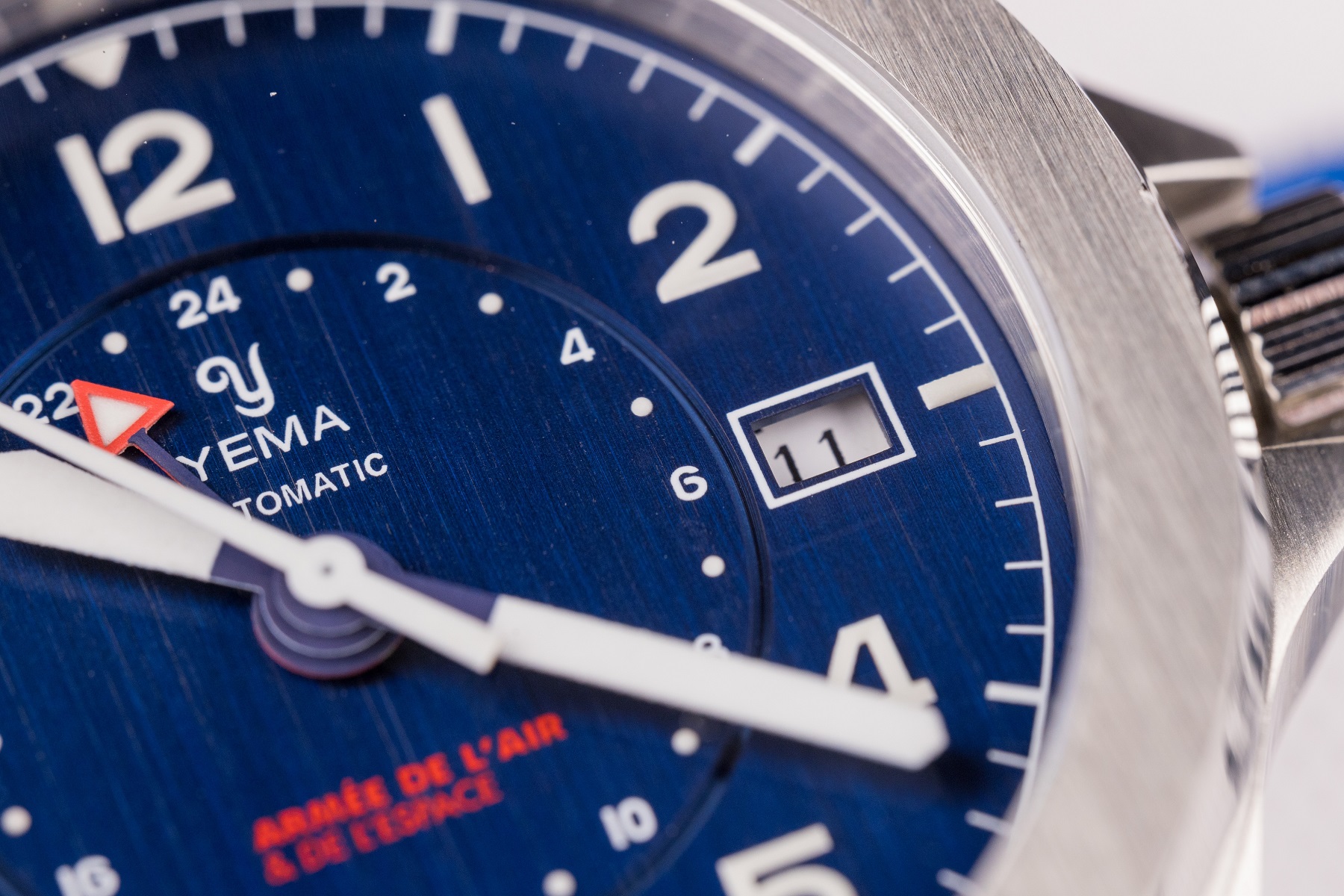 The dial also displays the French Air & Space Force official logo at 6 o’clock. To round things off on the dial, the date is positioned at 3 o’clock, and the printed markers have a layer of Super-LumiNova BGW9. The same luminous material is applied to the steel ion-plated blue hands. In terms of visibility at night, these hands are just splendid. Even the small second timezone indication is visible in the dark. Admittedly, though, it could be tricky to read during a bumpy night flight. 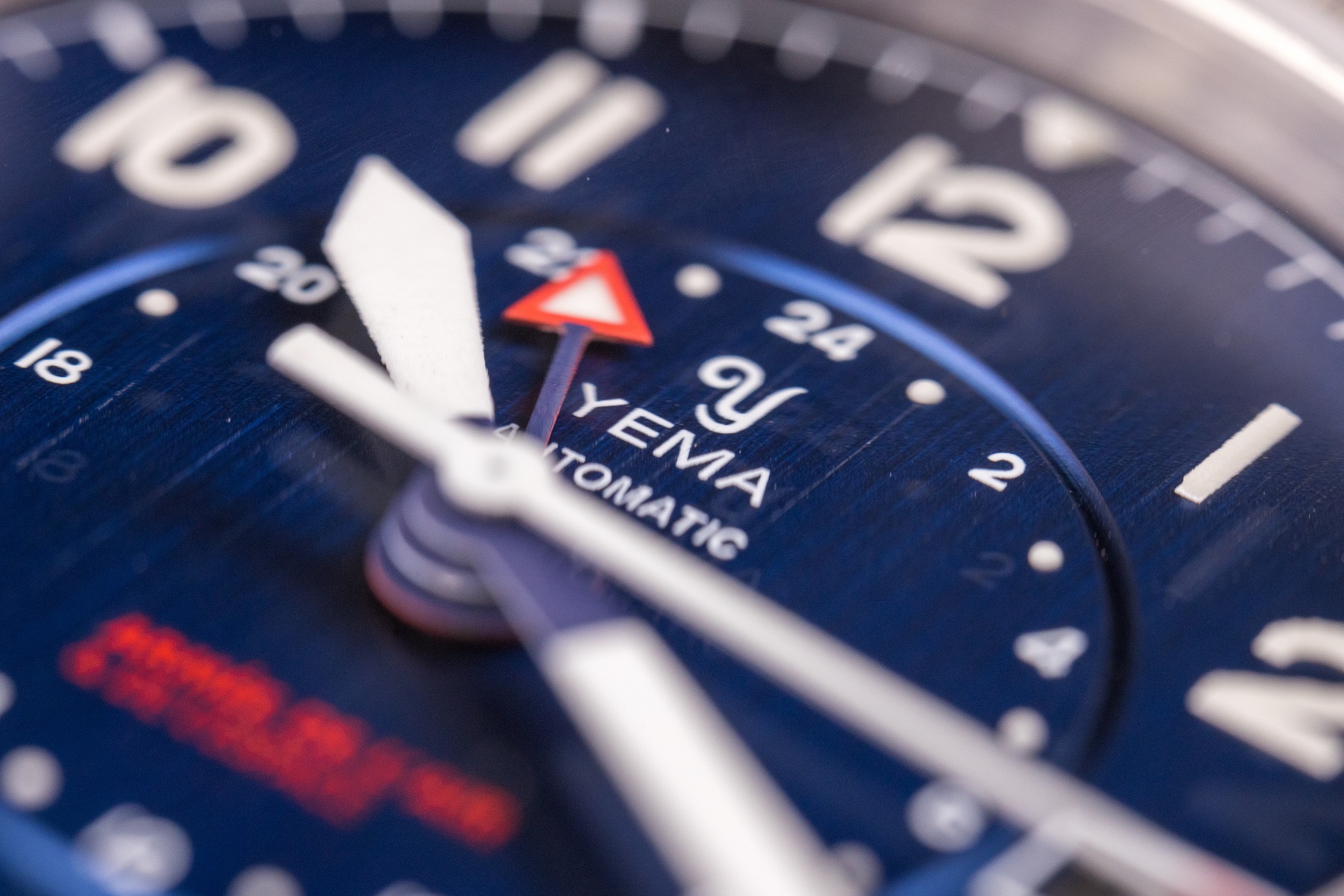 I was impressed by the Navygraf for the maritime forces. Now I’m impressed by the Flygraf for the Air & Space Force. The size is not only right, but the color is too. Little details — like the screw-down crown with the French Air & Space Force insignia stamped under a crystal coating — create a certain je ne sais quoi that really hits the spot. I think the price of €1,049 is fair too. For that money, you don’t merely get a numbered limited edition. You get a 300m water-resistant watch with a mechanical, in-house-developed GMT movement. I think it’s a nice story to tell watch-minded, kindred spirits that the beating heart of your Yema comes from the French and not the Swiss Jura. 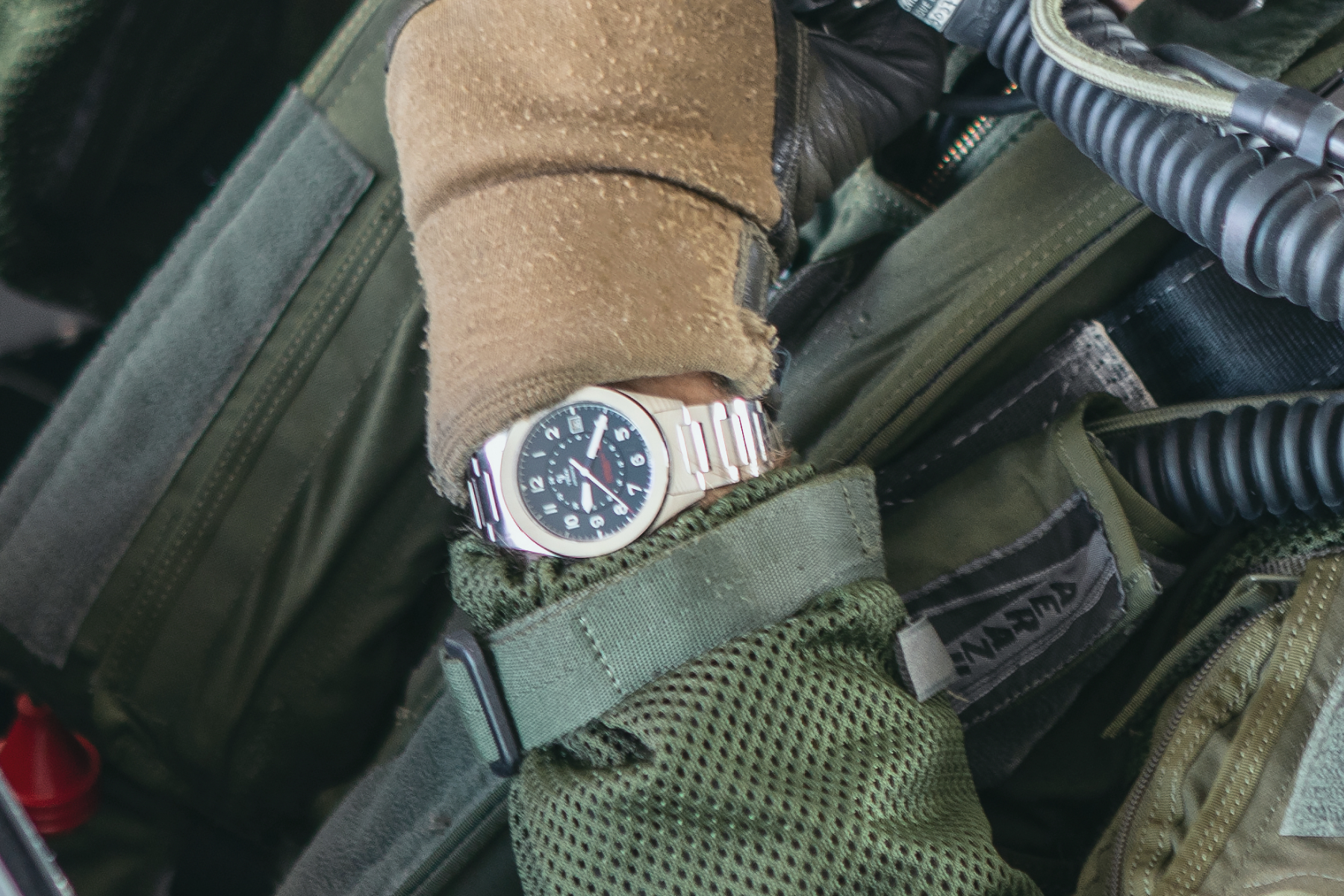 A small disappointment and a crown to cheer you up again

I think the extra strap also helps seal the deal for this watch. Okay, the clasp of the bracelet is maybe a bit crude and old-fashioned. But it is solid and keeps the watch safely on the wrist. With brushed finishing, it has an appealing, no-nonsense tool-watch appearance. I will admit that I possibly felt a bit disappointed when I found out this is a pilot’s watch, not an astronaut’s watch. The fact that everybody at Fratello is Moonwatch-obsessed plays a big part in that. But once on the wrist, that disappointment ebbed away. The colorful crown cheered me up every time I looked at it, too. There are also extra bonus points for something you can’t see; Yema will donate 12.5% of the sales of this watch to the official French Veterans Foundation (FOSA). Merci beaucoup! 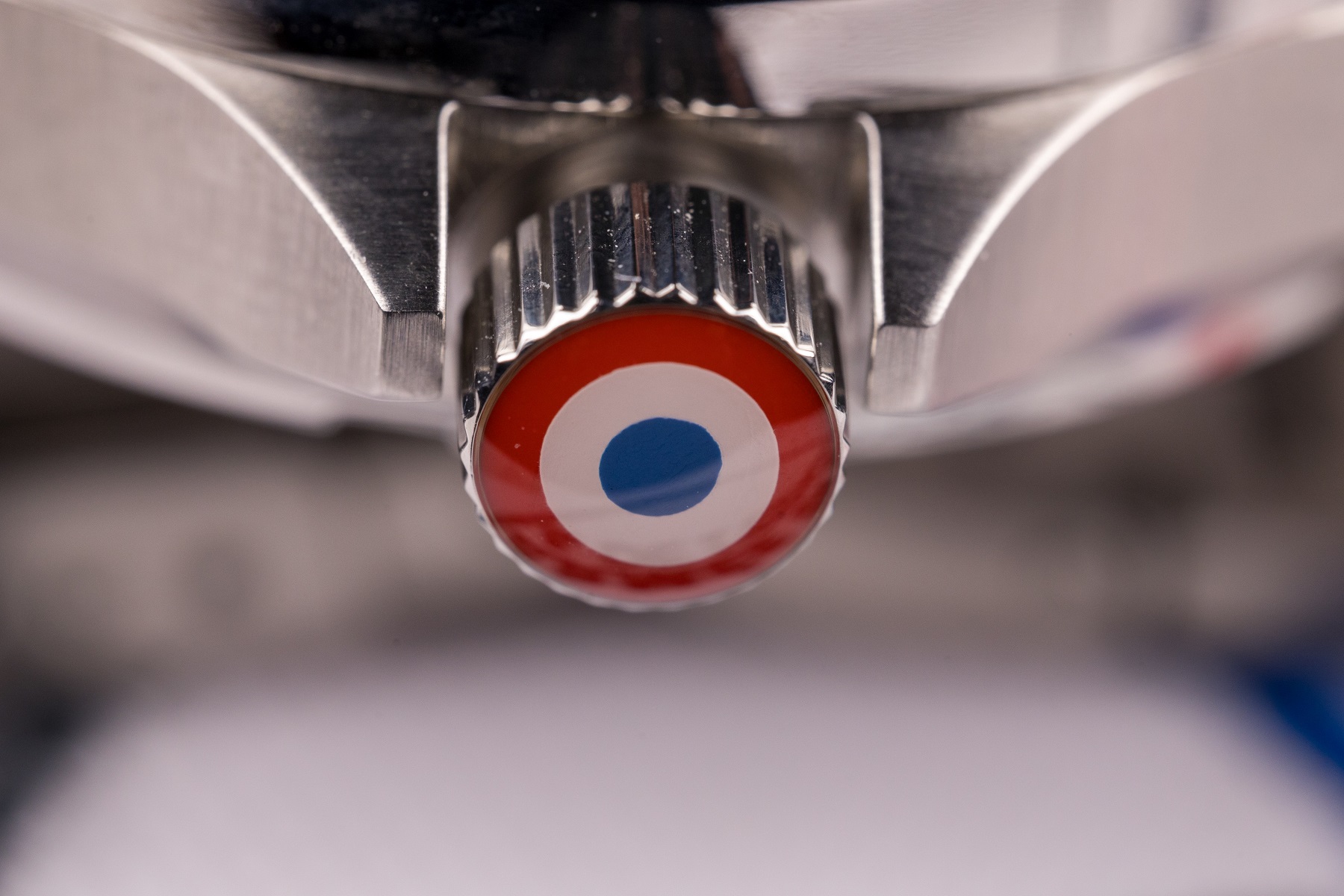 To find out more about the Yema Flygraf French Air & Space Force GMT Steel and other watches in the new collection, please visit the brand’s official website.

Hot Topics
Are You Still After An Omega × Swatch MoonSwatch?
108 comments
Introducing: The New Seamaster Professional 300M 60 Years Of Bond — With A Special Animated Case Back
107 comments
Introducing: The Oris Divers Sixty-Five Fratello Limited Edition
104 comments
It’s Time To Invest In A Dress Watch — Our Picks From Breguet, Omega, Grand Seiko, And More
74 comments
Rolex Is Going Certified Pre-Owned
61 comments
Popular
A Question From A Reader: “Which Modern Speedmaster Is Closest To The Original Moonwatch?”
Robert-Jan Broer
14
An Overview Of All Omega Speedmaster Apollo XI Models
Robert-Jan Broer
17
Grand Seiko SBGA211 ‘Snowflake’ And Why I Didn’t Buy It
Robert-Jan Broer
22