Fans of manga, anime, and polarizing watches rejoice: Zenith may have released just the watch for you! This Lupin The Third – Final Edition is the latest installment into Zenith’s highly successful Chronomaster Revival range. It is also the last piece in a trio of watches inspired by the Japanese manga and anime series Lupin The Third. The first two Chronomasters in this limited-edition series featured previously unproduced dials. The designs came directly from episodes of the anime series, and both had an overall classic aesthetic. For the final edition, however, Zenith went all out, combining the previous two dials for an eye-popping look.

At Fratello, we’re big fans of the Chronomaster Revival range with its 37mm tonneau case design. It hearkens back to the Zenith El Primero A384 and A385 from 1969. They were two of the initial three watches to feature the world’s first high-beat automatic chronograph movement. In recent years, it seems Zenith has had fun with the range, and we certainly have had fun reviewing the models. We’ve seen the  A385 featured in The Fast And The Fratelli and the 1971-throwback A3817. We’ve even gone hands-on with one of Dave’s sweethearts, the microblasted titanium Chronomaster Revival Safari. But although I’m one of the team’s most fervid Zenith fans, even I must admit that this new release caught me off guard. Michael Jackson said, “It don’t matter if you’re black or white.” But why be one or the other, when you could be both? Let’s find out if Zenith is on to something with this. 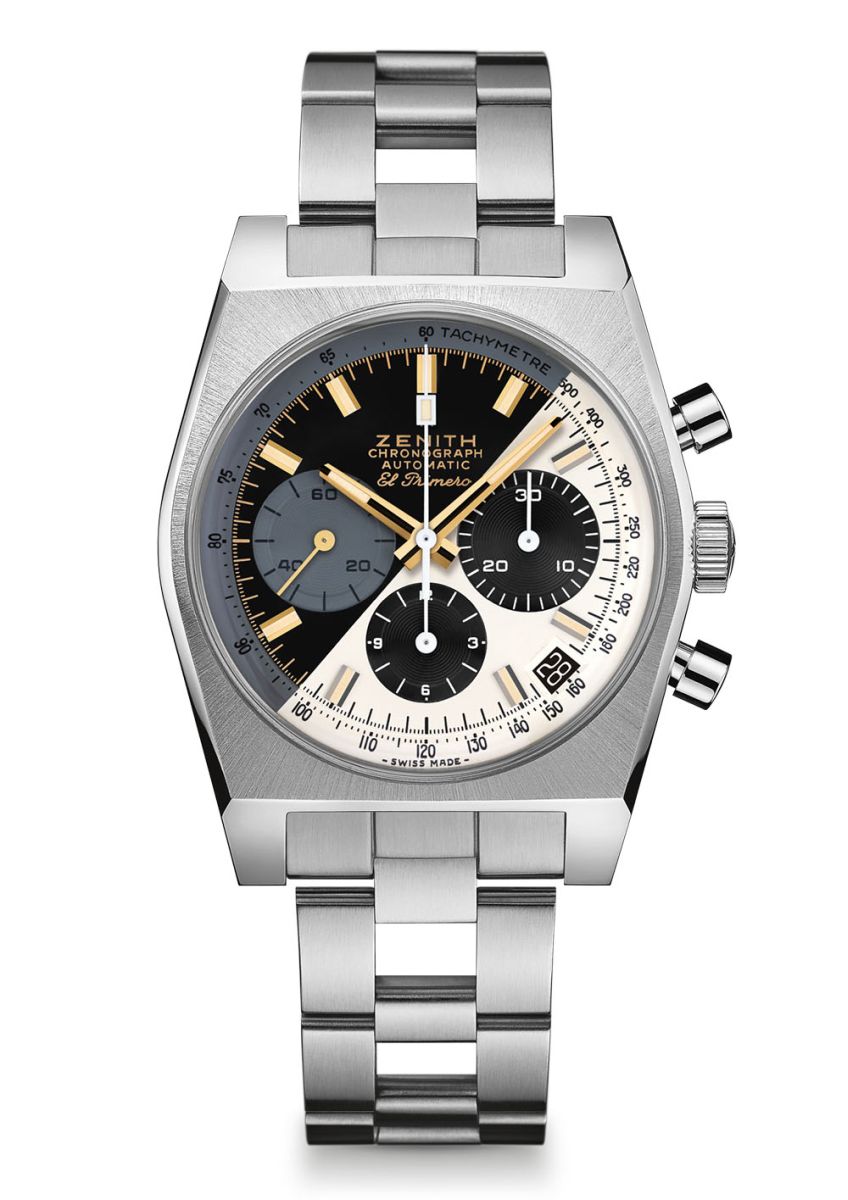 The third Lupin The Third

Zenith certainly has a historical reputation for some of the funkiest dials in the watch industry. The now-legendary tri-color A386 look is one that, though not for everyone, is definitely for me. It’s not often, however, that we see a dial like this, split in such a dramatic and potentially jarring way. The last watch I can think of that had a similar look was the Chronoswiss Timemaster 24H Day & Night from the mid-2000s. On that watch, the dial was half lume and half black. With its 24-hour day/night display, the split at least made some sense to me. With the Lupin The Third – Final Edition, however, it seems like more of a stylistic decision than a practical one. 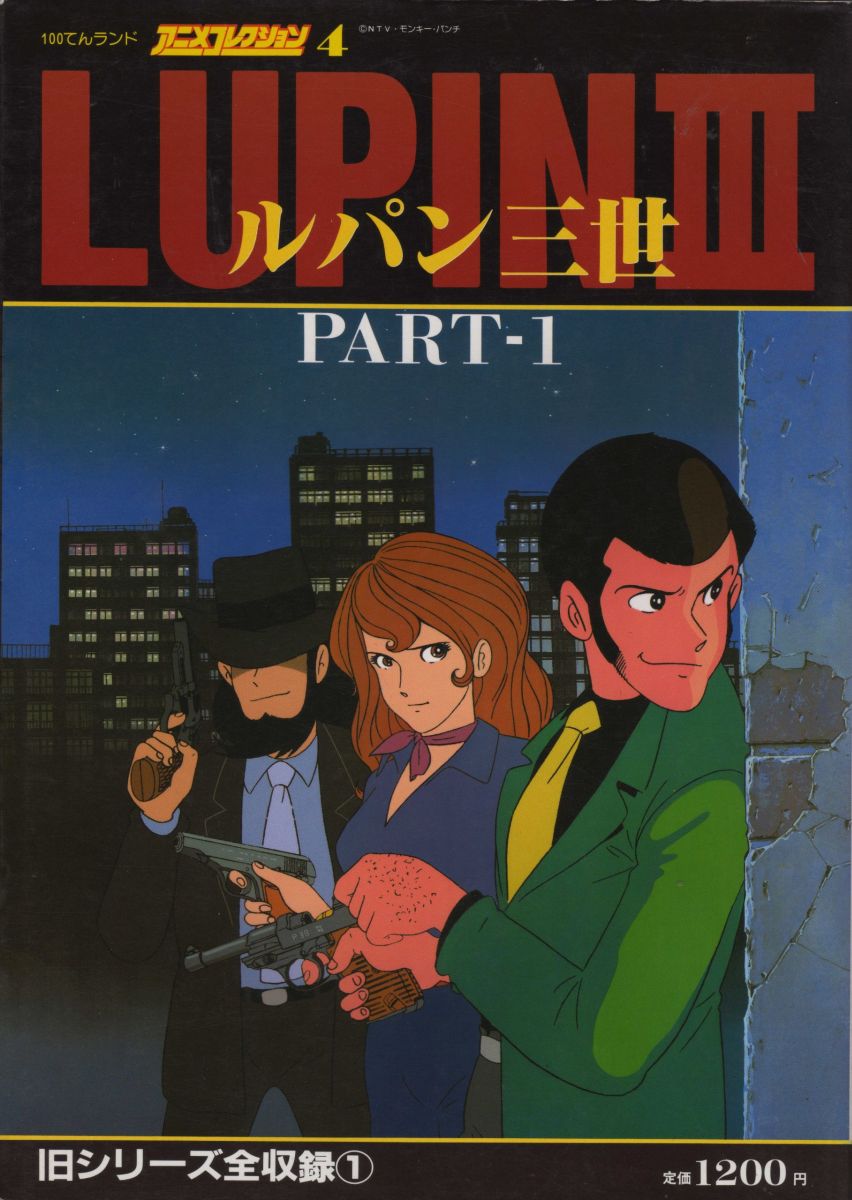 As I stated in the intro, the first two editions in this series took their inspiration directly from the Lupin The Third animation. Both were seen on the wrist of the Daisuke Jigen, sidekick and best friend to the titular character, Arsène Lupin III. Along with two other main characters, Goemon Ishikawa XIII and Fujiko Mine, Lupin and Jigen steal the world’s greatest treasures. Lupin is the grandson of the world’s most renowned gentleman thief, while Jigen is known as one of the foremost sharpshooters. 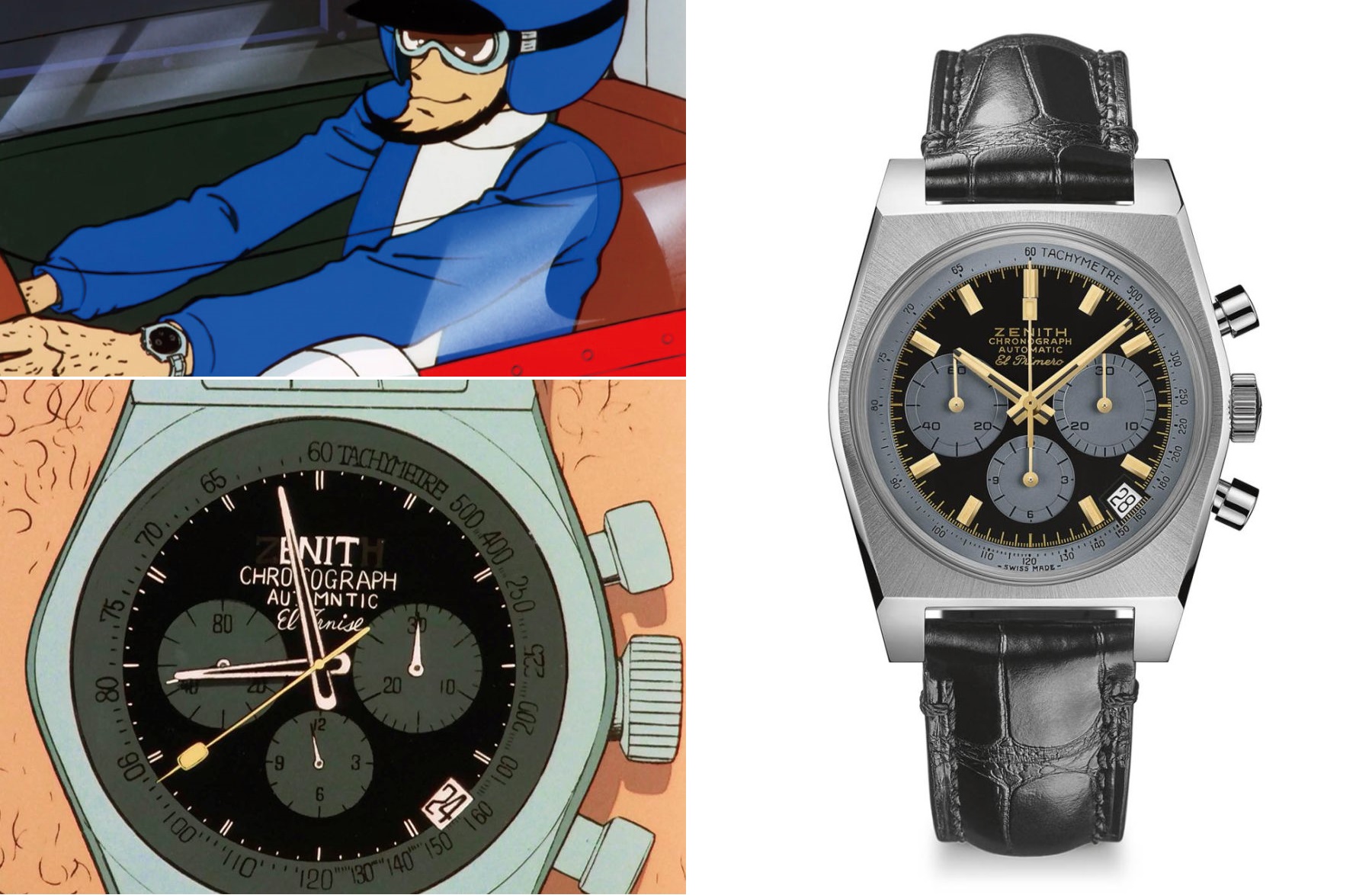 The watch seen on his wrist in the very first episode of the animated series was a Zenith chronograph similar to the A384. It featured a non-existent black dial with gray chronograph registers, a gray tachymeter, and gilt hands and indices. Zenith produced the watch in 2019 in a 50-piece limited run for the Japanese domestic market. 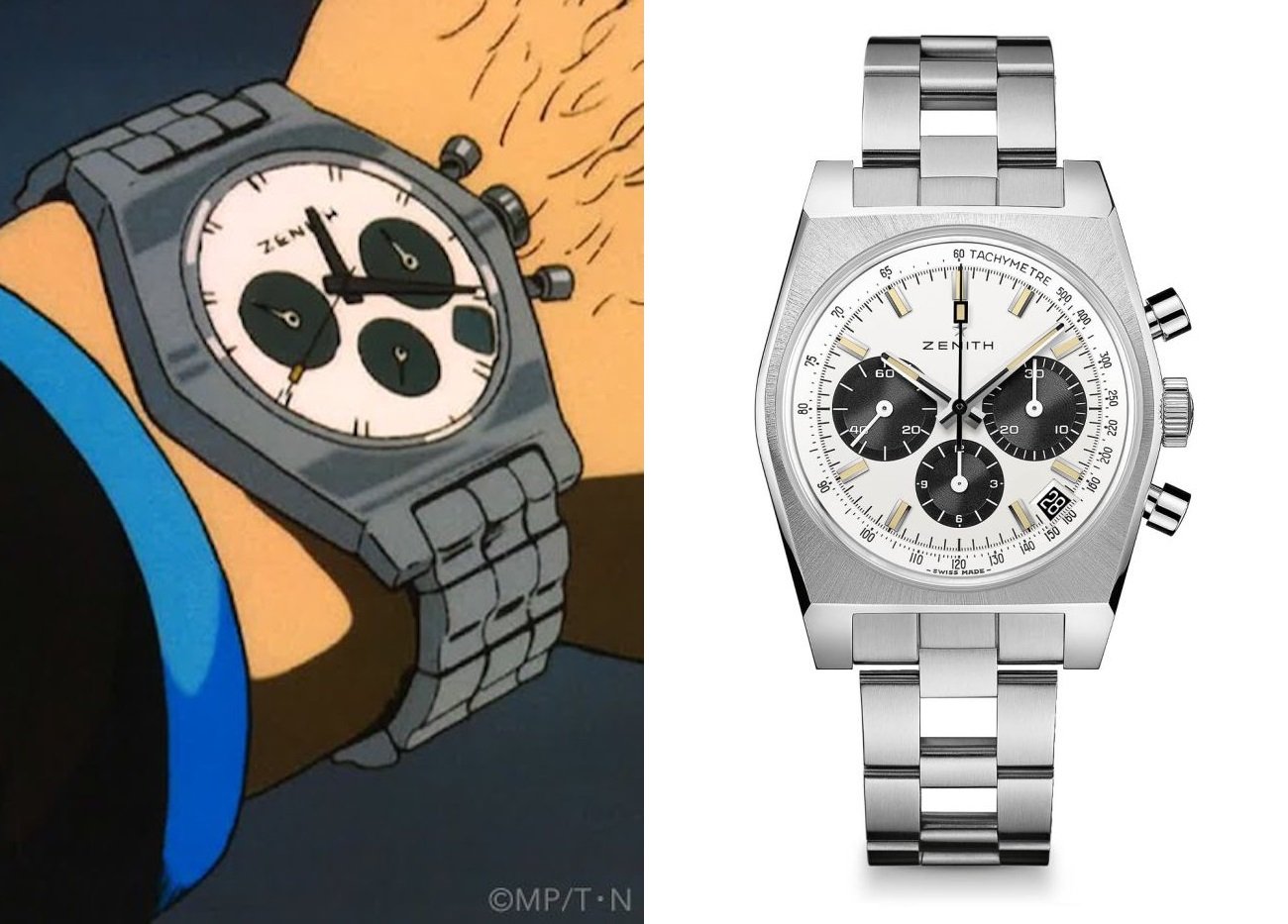 The second watch was on Jigen’s wrist in the final episode of the first series. It featured a panda dial, much like the real-life A384, but had a white tachymeter scale instead of a black one. A black date disc and black chronograph seconds hand also set it apart from its real-life counterpart. Zenith brought the watch to life in 2020 as a 200-piece limited edition available worldwide. 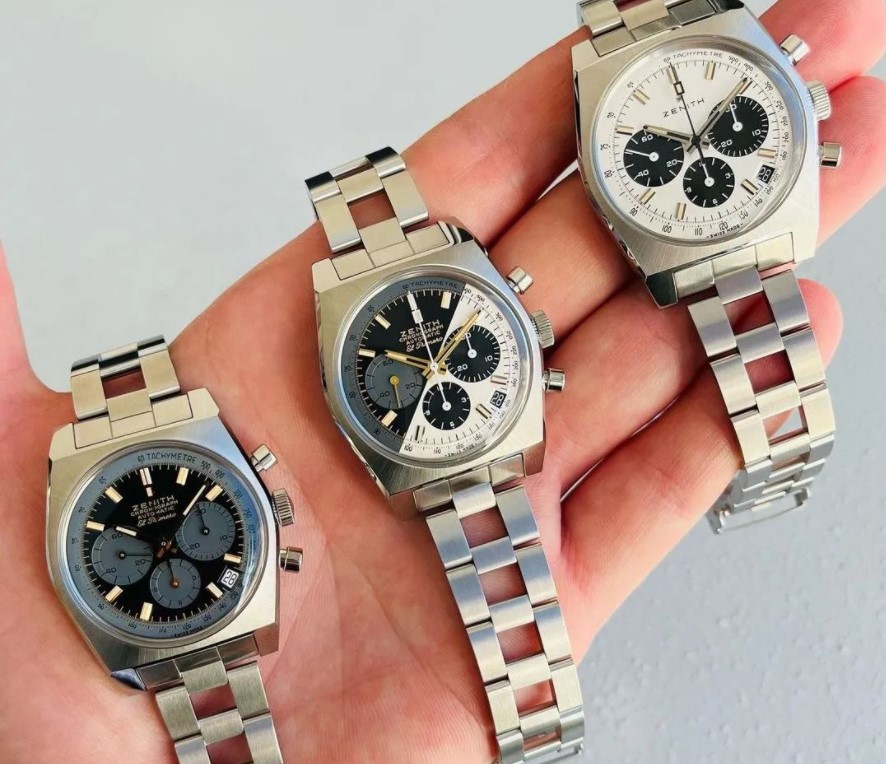 Both of the previous pieces were beautifully done, and perhaps Zenith could have left the project at that. But in a series named after Lupin The Third, I suppose it makes sense to have not two, but three watches. As you can see, the Final Edition features a diagonally split dial that combines the aesthetics of both of its predecessors. One might assume that in order to achieve this, Zenith started with an all-white base, masked it off, and then painted the left half black. Instead, Zenith chose to paint the right half white first, finishing it with protective lacquer before milling the sub-dials and painting the black half on the left separately. 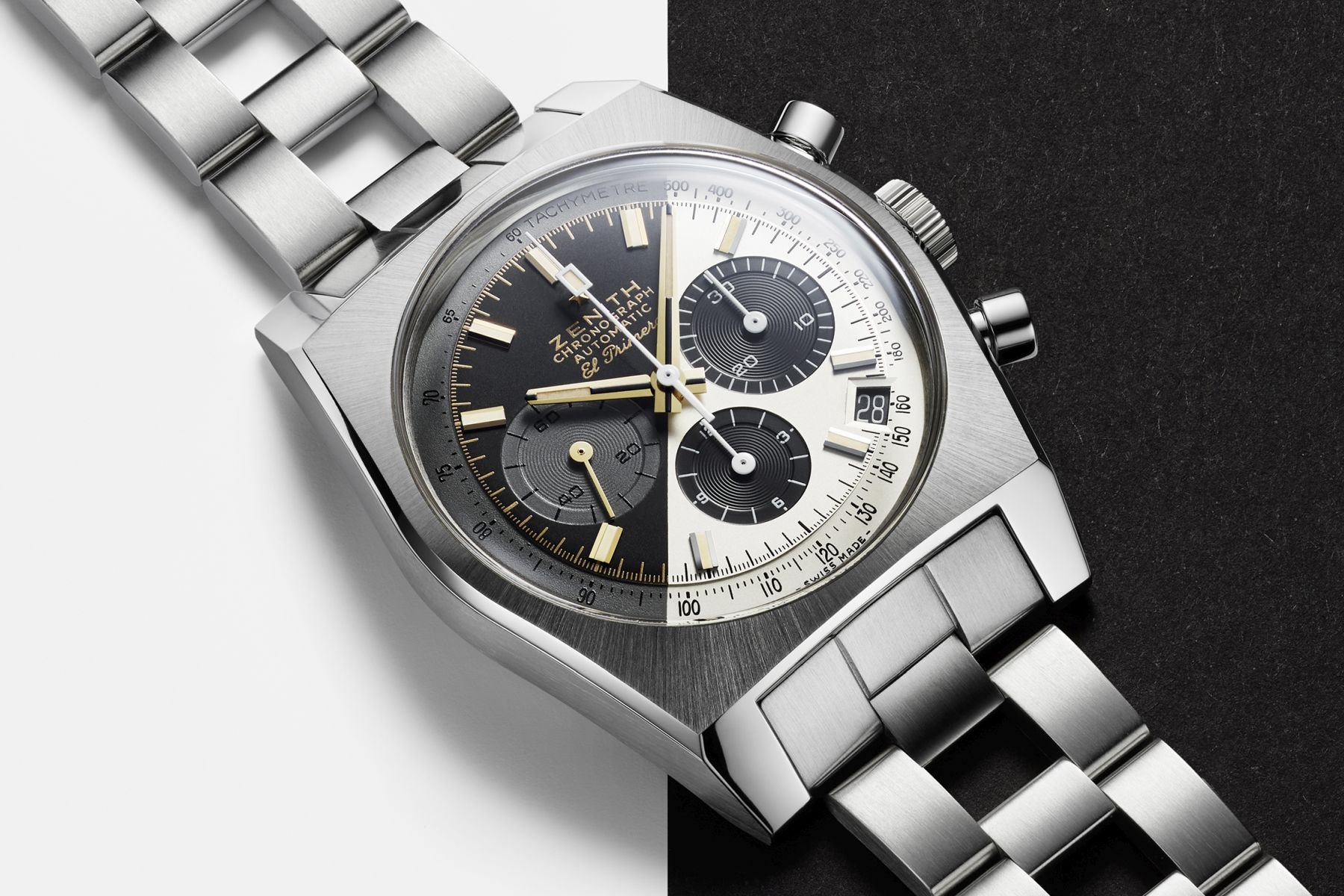 According to the press materials received from the brand, the manufacturing process is an arduous one. The bleeding of colors is an imposing threat, and the slightest error could mean starting over again. I assume the advantage of a process like this is that the black and white halves remain even in thickness. If the black half were painted over a white base, that half of the dial would be thicker indeed. It’s not entirely clear whether the gray half of the tachymeter and the running seconds counter went through a similar process. The brand does state, however, that painting these elements added “another layer of complexity”, so take that for what it’s worth.

The gilt branding on the black half matches the gilt indices and hands, and in my opinion, it’s a fantastic look. The white half retains its black date disc, black sub-dials, white tachymeter, and rhodium-plated indices. Like both of its forebears, the Lupin The Third – Final Edition houses the famous El Primero 400 movement. This 31-jewel automatic column-wheel chronograph is accurate to 1/10 of a second. It can measure up to 12 hours at a time and has 50 hours of power reserve. 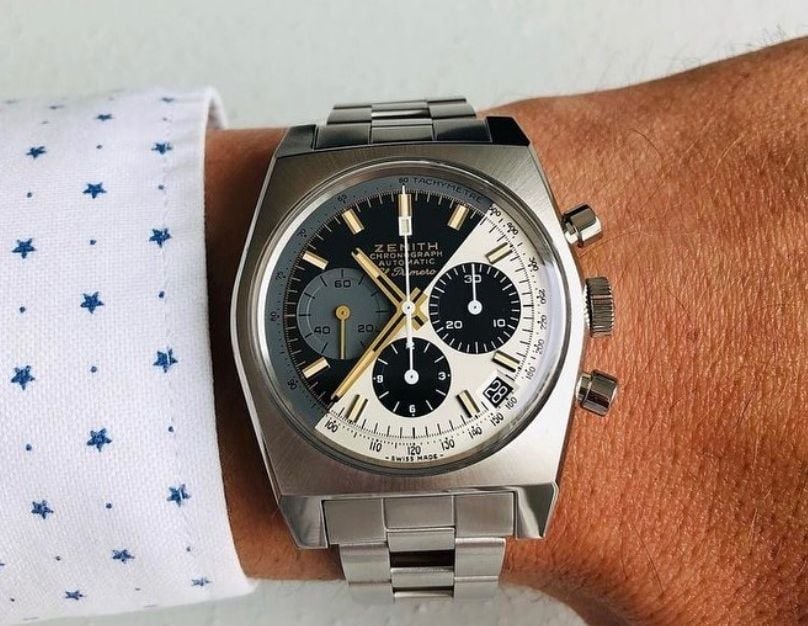 One little detail that’s specific to this model is the white chronograph seconds hand at center. Although I’m sure a matching gold one would have looked great as well, I greatly appreciate the unique touch the white hand adds to this piece. As the hands for elapsed minutes and hours are white too, it’s a nice way to link the chronograph functions together.

The case of this Chronomaster Revival measures 37mm wide and 47mm from lug to lug. These dimensions remain true to the original A384, while the sapphire crystal lets it wear a tad thinner. Including the domed AR-coated crystal and display back, the watch measures 12.6mm thick. That’s reasonably slim for an automatic chronograph. A high-polished finish on the bevels and lug tops complements the brushed sides and sunburst-grained facade. The brushed ladder bracelet is also a throwback to the original Gay Frères design from 1969. The push-pull crown facilitates 50 meters of water resistance, while pump pushers ensure the chronograph is ready when you are. 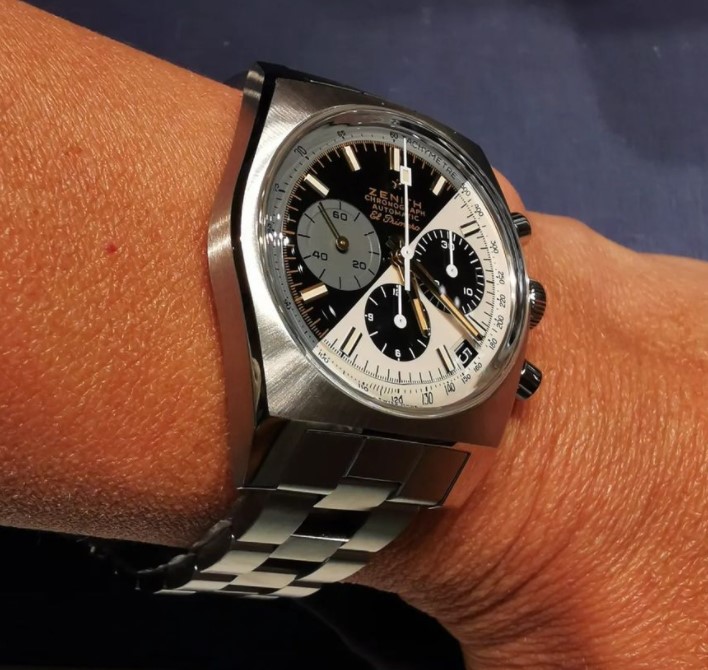 But another unique feature of this final Lupin edition is the all-titanium case and bracelet construction. The only other Chronomaster Revival models in titanium are the dark microblasted Safari and Shadow editions. All other models in the line so far have featured stainless steel construction for the cases and bracelets. To me, the choice of traditionally finished titanium is crucial. I believe it makes this piece worth producing at all. 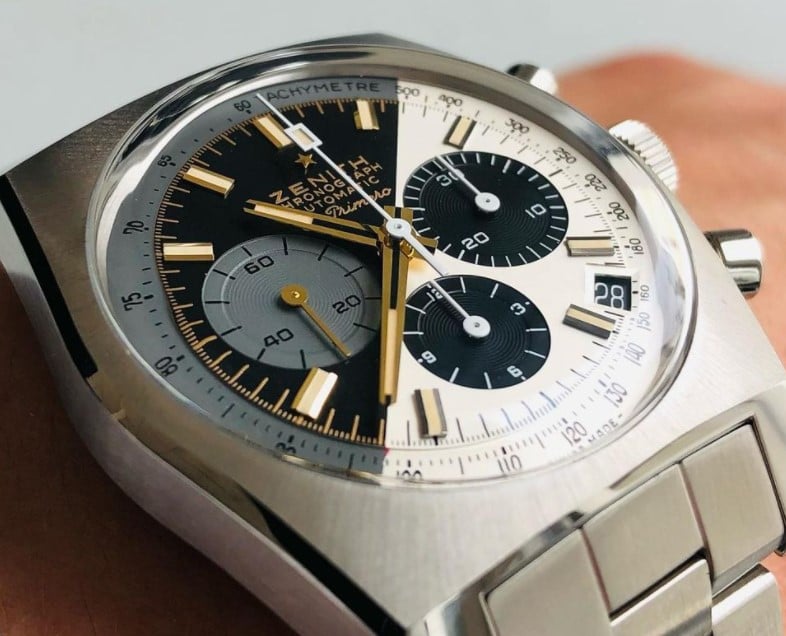 Although I’ve lived in Japan for two months short of a decade, I actually couldn’t care less about most manga and anime. For me, the connection to Lupin The Third is simply not enough to make me go nuts for this model. And although I appreciate the labor the dial requires, I can’t help but think the concept seems a bit… I don’t know… contrived? I am honestly unsure whether I like it or not. Half of me does because it’s just so out there! But half of me doesn’t because I’m still asking, “Why?” As I mentioned above, the all-titanium construction is the make-or-break factor for this model’s existence. It’s the one element besides the white chronograph seconds hand that doesn’t draw inspiration from its two predecessors. In steel, I think this watch would have come across as a cash-grab, and as a fan of the brand, I know Zenith can do better than that.

That said, the Chronomaster Revival Lupin The Third – Final Edition isn’t for everyone. Nor was it intended to be. Zenith will produce just 250 pieces, a combination of the numbers of the previous versions. Though the watch seems to have sold out in the brand’s online store, it may still be available at physical Zenith boutiques. It is priced at €9,700 or CHF 9,900. If you’re a watch-loving fan of Lupin The Third or you just dig the look of this final edition, I’d suggest getting in touch with the closest Zenith boutique pronto. No telling how long the remaining pieces will stick around. For more information on this limited edition, check it out on the Zenith website.

Let us know what you think of this Chronomaster Revival in the comments. Do you love it? Do you hate it? Or does that dial split you in half, as it does to me? I’m interested to hear your thoughts and opinions!

Hot Topics
Introducing: The Omega Speedmaster Super Racing With Spirate System
165 comments
Design Vs. Specs — Which Is More Important To You When Buying A Watch?
87 comments
New Release: The Limited-Edition Seiko Prospex SLA067J1 Diver
59 comments
My Predictions For New Omega Speedmasters In 2023
57 comments
The Time To Buy Is Now: How The Current Economic Climate Influences Watch Buying And How You Should React
51 comments
Popular
Rolex GMT-Master History And Overview Of All Major References
Robert-Jan Broer
21
(From The Archives) Shut Up & Read The Truth About Cartier Watches
George Cramer
21
#TBT A Vintage Seiko Buyer’s Guide to Affordable Goodness
Michael Stockton
32