Every watch enthusiast can think of a great discontinued timepiece that should return to the spotlight. Not as a reissue, but as a worthy successor to the original. An original 2.0, if you will. That’s what we talk about at the Fratello offices. And these talks inspired us to come up with a series about watches that the Fratello editors would like to see make a comeback. Some watches are iconic, some of them are less popular. But all of them are loved by at least one of our editors. Let’s look at some of our favorites in this series. This time, it’s Lex who wants the late 1990s Zenith El Primero Rainbow Flyback Chronograph redone.

In those Fratello team discussions, we regularly dive deep into the archives of a brand to talk about some watches from the past that we love. As a result, the question, “Wouldn’t it be great if the brand would bring this back?” often arises. It has become the central theme of this series. Despite our excitement, we don’t expect brands to bring them back.

… this series is not based on a watch’s commercial success.

There are often valid strategic and commercial reasons not to bring back the models we will be mentioning. But this series is not based on a watch’s commercial success. The series is based on the love that we have for these gems of the industry. Jorg kicked off the series with the IWC Ingenieur SL “Jumbo” Ref. 1832, and now it’s time for the second installment by Lex. He wants to see the fast-beating Zenith El Primero Rainbow Flyback Chronograph 02.0480.405 make a comeback. 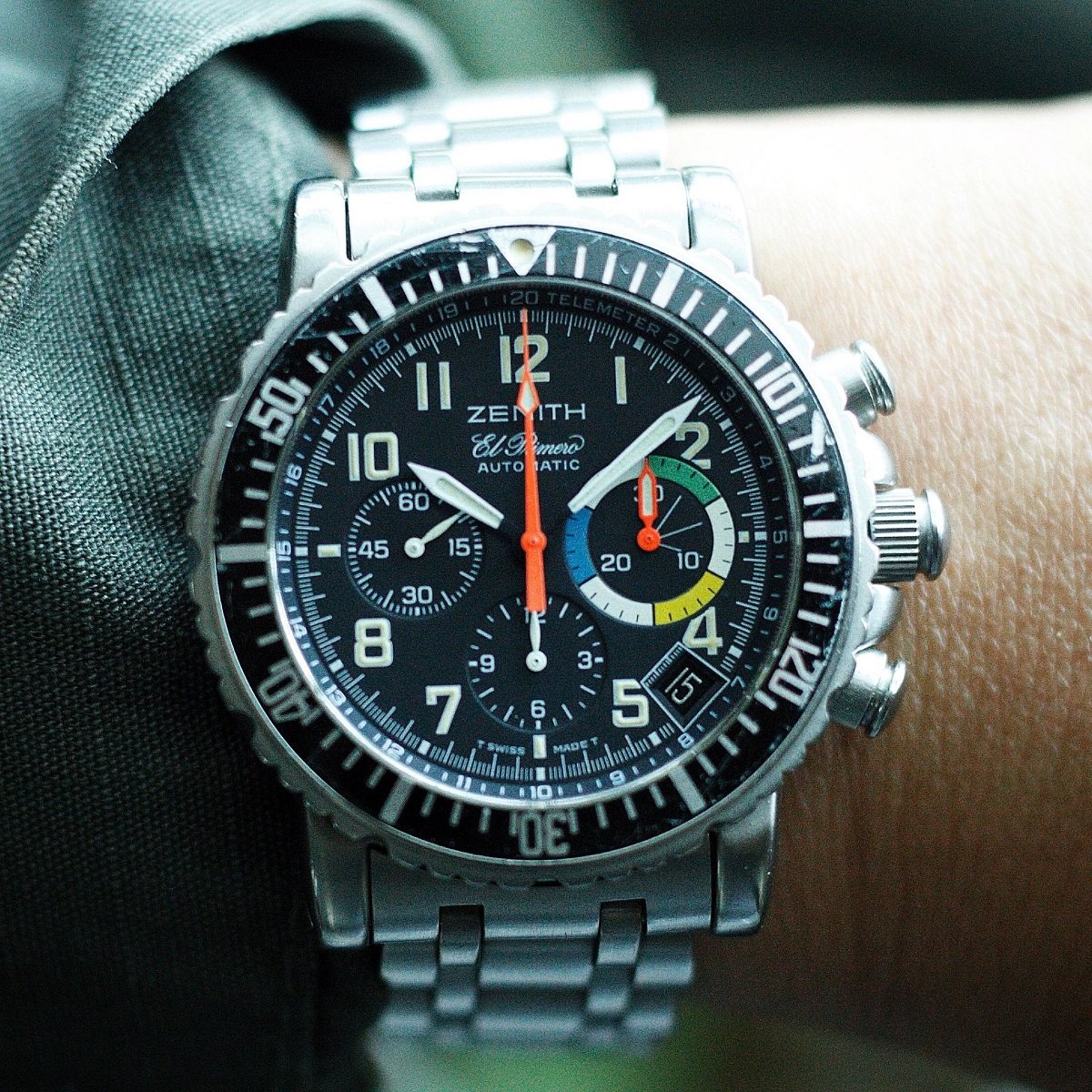 Greatness isn’t always born in the 1950s or 60s. Although it seems unlikely, some great watches stem from the 1990s. Maybe the best example of a memorable watch from an otherwise quite bleak era, if you ask me, is the Zenith El Primero Rainbow Flyback Chronograph ref. 02.0480.405. Unsurprisingly, Jorg already mentioned the watch in his Buying Guide on the top Zenith watches of the 1990s. What is way more surprising is that in the golden age of retro, Zenith hasn’t brought back the “Rainbow” but seems to be stuck in the early years of the El Primero chronograph. Mind you, there’s nothing wrong with El Primero chronographs from that era, au contraire. But there’s more in the back catalog than the A3817, for example. Let’s hope this article will help the people at Zenith have a look into the brand’s more recent past to find a colorful gem that needs a polishing up. 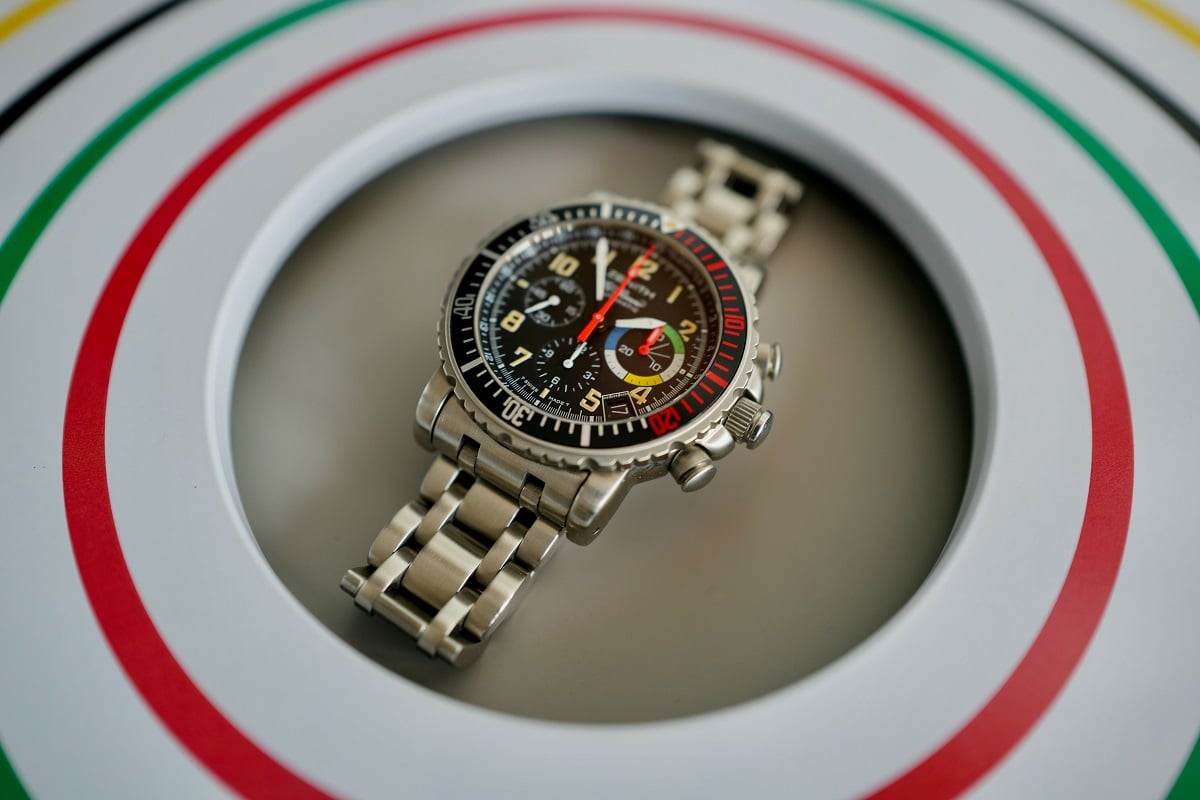 The “Rainbow” is a sailboat, not the actual rainbow

Ever since Zenith dropped the Chronomaster Sport in January 2021, I’ve been waiting for the press release to appear on my screen saying there’s a new version of the legendary Rainbow. But it hasn’t. Still. And that baffles me because I think that the 41mm case of the Chronomaster Sport with its ceramic bezel is the ideal platform to relaunch the 1990s legend. Or am I just impatient? Maybe 2022 will be the year of the Rainbow’s rebirth. Let me give you a quick historical overview to help you understand what I’m talking about. But first, I should clarify what the “Rainbow” moniker is all about.

The name “Rainbow” stems from the sailing boat that took the victory in the 15th America’s Cup in 1934. Zenith used the Rainbow name for a series of waterproof 40mm sports chronographs that debuted in 1992. Though this model is quite colorful indeed, the name has nothing to do with the colors on the dial. 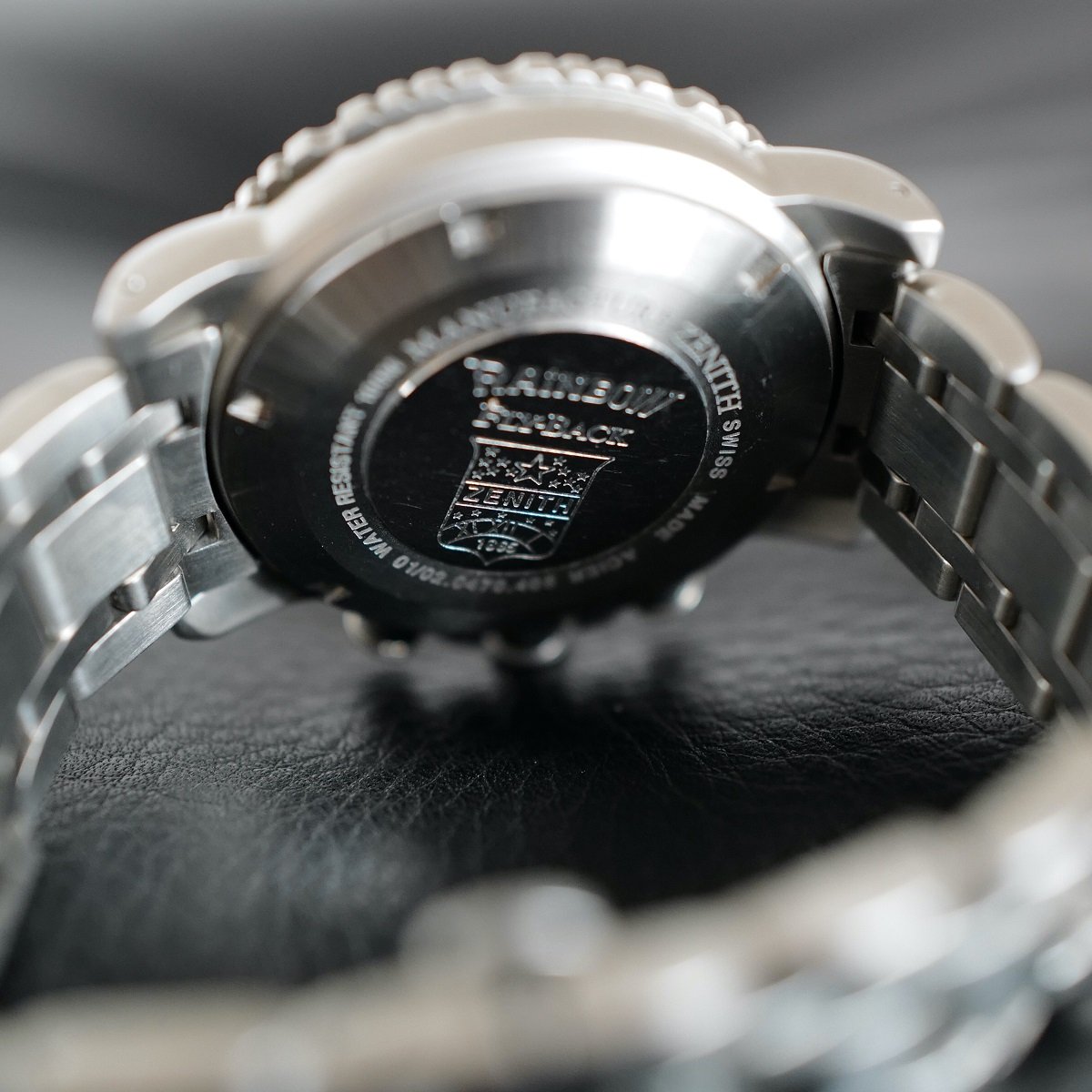 Designed for the military, sold to civilians

In the mid-1990s, the French Air Force commissioned Zenith to build and deliver 1,000 watches annually for four years. They had to be chronographs that could deal with the extremes of life and work in the cockpit of a fighter jet. Zenith went to work, but after the French elections at that time, the new government canceled the project. But Zenith had already developed, built, and sent the first six sturdy watches to the Air Force at that point.

… the name Rainbow could now also apply to the watch’s minutes counter with aeronautical sector colors and different red details.

To deal with the new situation, Zenith presented the 40 × 12.6mm El Primero Rainbow Fly-Back Chronograph during Baselworld 1997. It was a watch for civilians, designed for the military. The watch came out with the automatic El Primero Caliber 405 on board, and the original idea of screw-down pushers was abandoned for regular pushers. And the name Rainbow could now also apply to the chronograph’s minutes counter, with aeronautical sector colors and different red details. 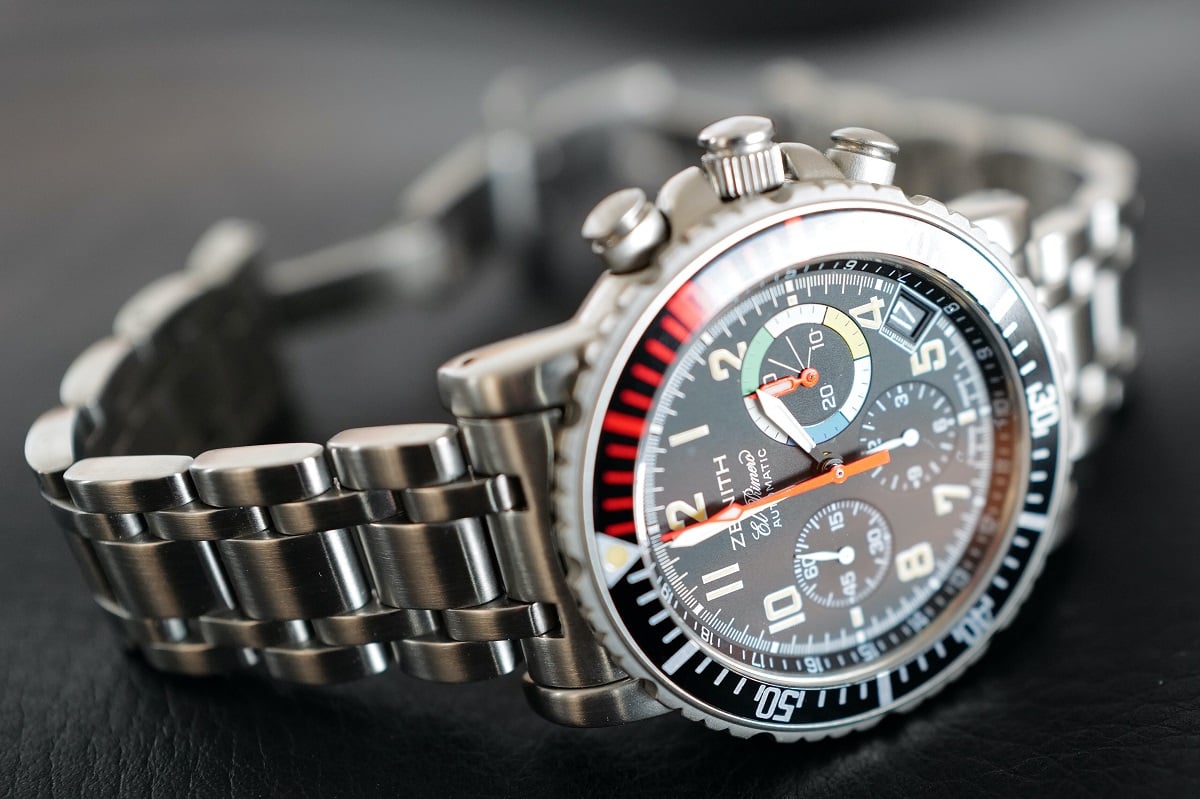 If you have done your math, you will have noticed that 2022 marks the 25th birthday of the Zenith El Primero Rainbow Flyback Chronograph. It’s the perfect time to come up with a worthy successor of the military project that was canceled but brought color to the otherwise bland Rainbow line. Yes, there was a colorful “Mango” version with an orange dial with an engraved silhouette of the Rainbow yacht on the case back, but I choose to ignore that for argument’s sake. Time to have a fresh look at the mesmerizing sub-dial that brightens up the watch with its green, blue, and yellow details. It’s time to bring back that bright red chronograph seconds hand and red 20-minute highlight on the black timing bezel. 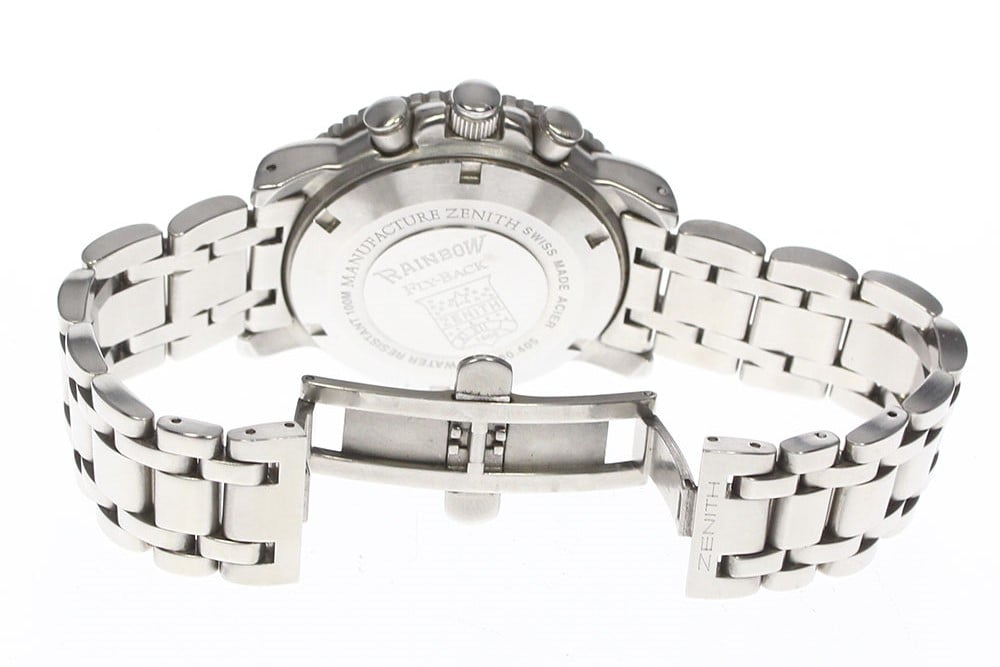 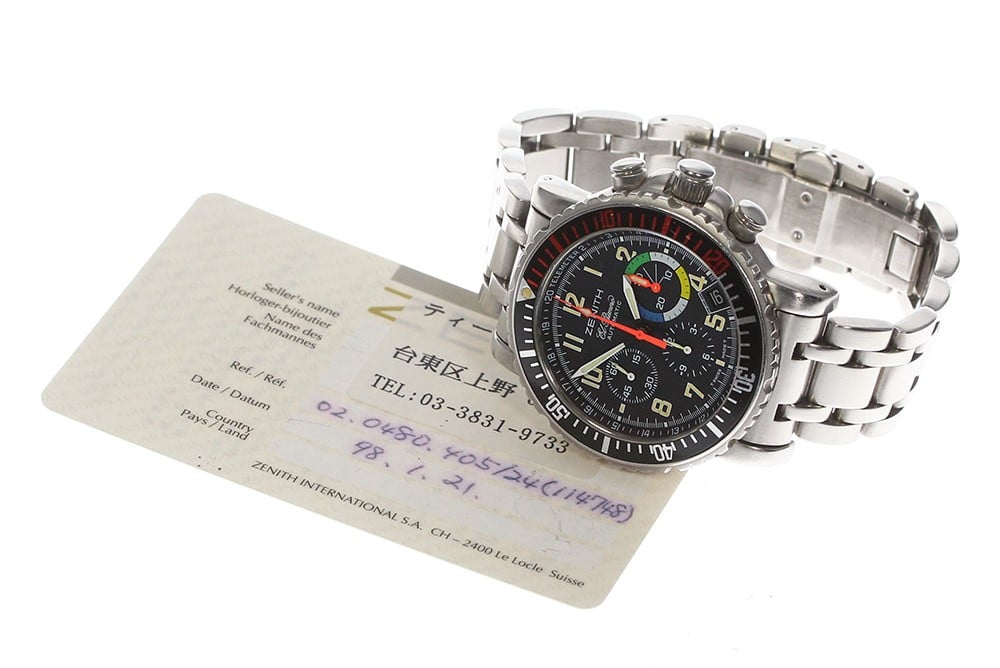 I once had to make the difficult decision of going down the El Primero or the Navitimer road. I picked the latter. And it’s not that I regret my decision because I’ve owned and worn some lovely Navitimers over the years — come to think of it, Breitling should come up with a classy new version of the quirky Spatiographe Montbrillant with its digital minute sub-dial. But I sometimes wonder what would have happened if I had chosen the way of the Rainbow instead. What I do know is that no matter how many lovely watches Zenith has launched in the recent past, I was always a bit disappointed not to see a new Rainbow. I seriously think that a new Rainbow — if done right, of course — will lead me down the path I once didn’t take. 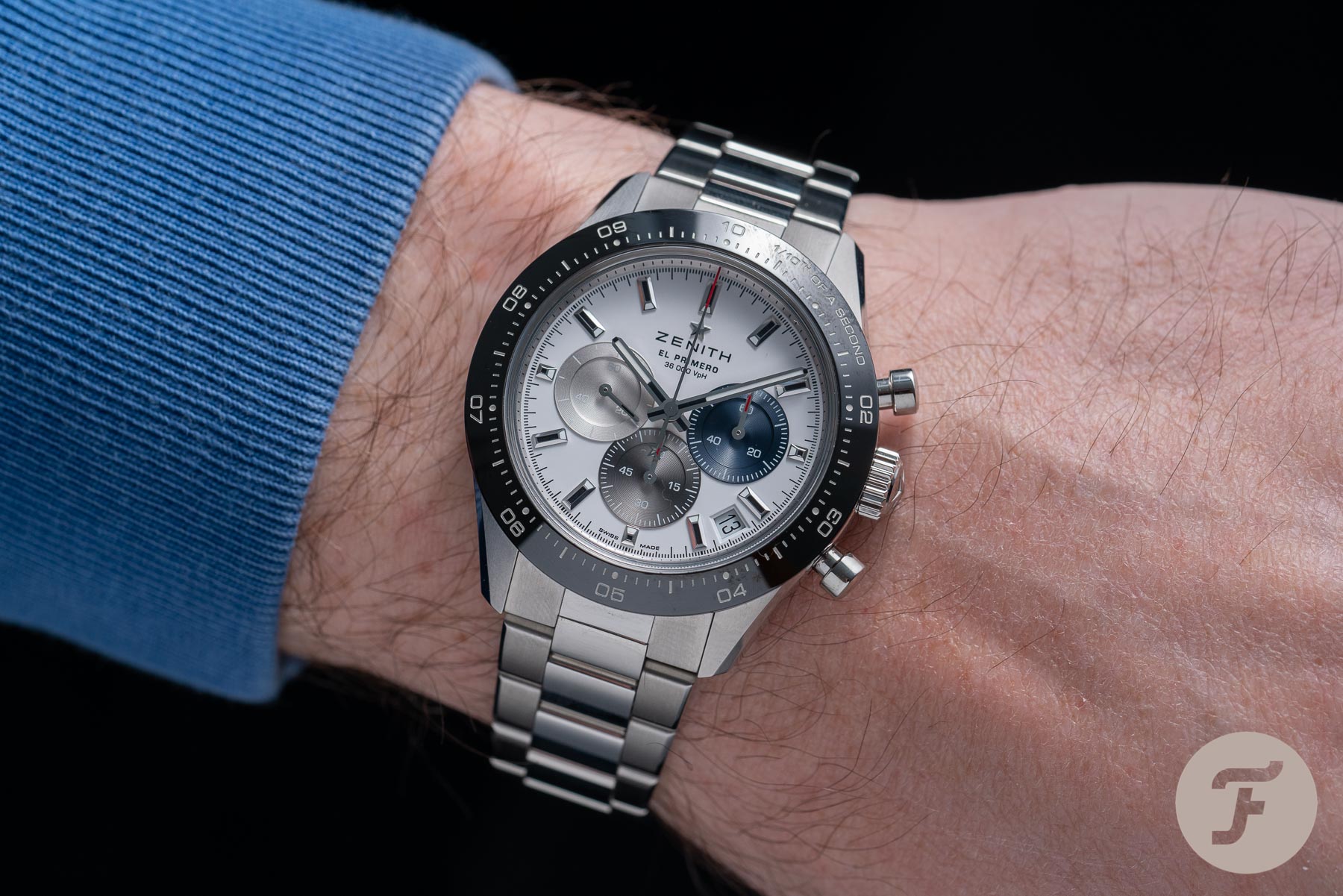 Could the Chronomaster Sport be the platform for the new Rainbow?

The Rainbow is wrist game

Anyway, bringing back the Rainbow using the Chronomaster Sport as the foundation is something a lot of people would dig, I’m sure. Zenith should also come up with an updated version of the original bracelet and not just stick the one from the Chronomaster Sport on it, But when the brand does come up with a worthy Rainbow 2.0, not only the people at Fratello HQ who would have a soft spot for the watch will love it. No, when Mike wrote a Wrist Game or Crying Shame about the original watch, the outcome was clear: 71% of the voters thought the old El Primero Rainbow Fly-Back Chronograph ref. 02.0480.405 was “wrist game”. I’m sure a lot of people who were into watches in the 1990s have fond memories of the original Rainbow and can’t wait for a new one to appear. 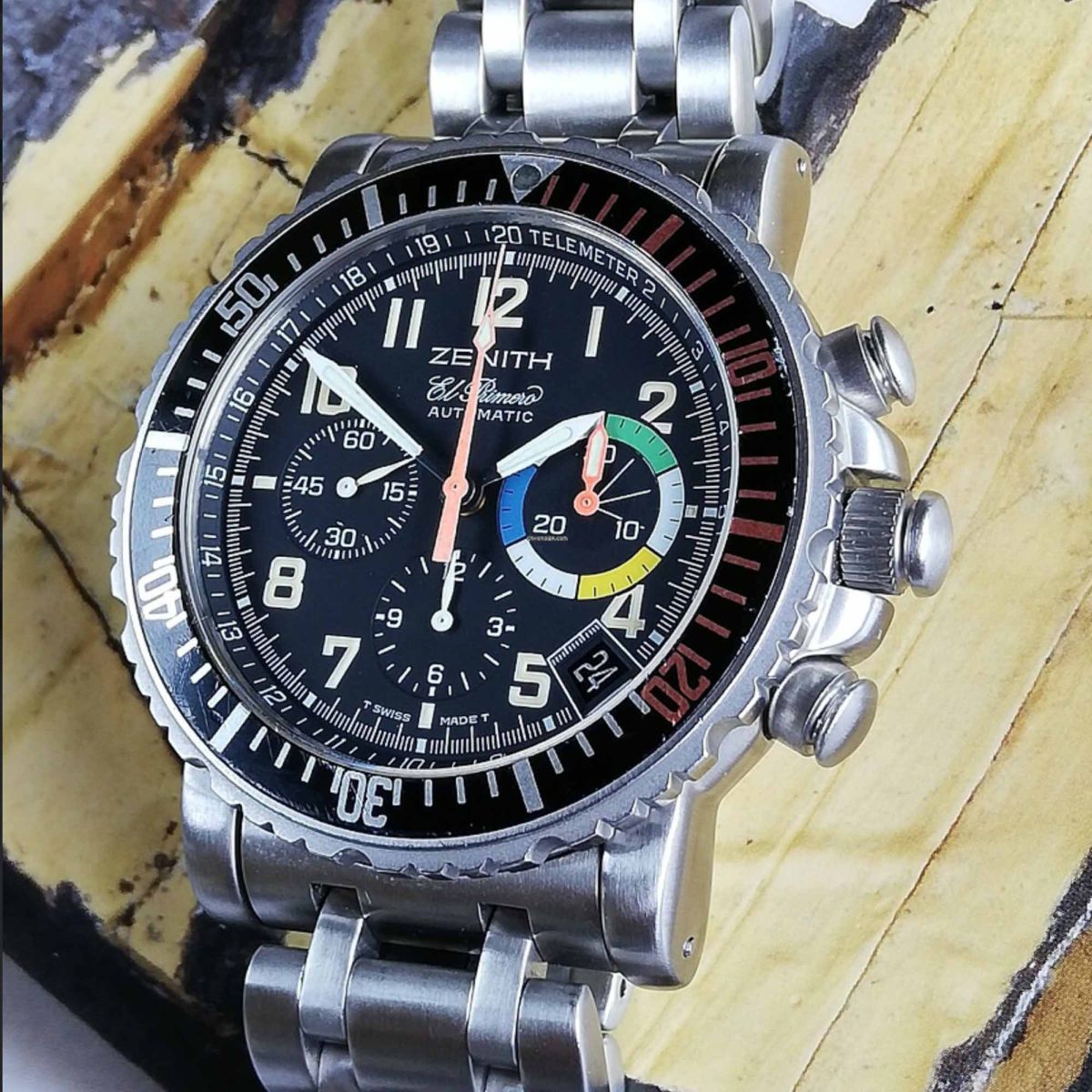 Keep an eye out for a possible new El Primero Rainbow Fly-Back Chronograph on the pages of Fratello. And also keep an eye on Zenith’s official website.