Despite having been founded in 1882, in many ways the Zodiac Watch company still feels like a young and vibrant new brand. Much of this phenomenon can be traced to the acquisition of the marque by Fossil, Inc. in 2001. This recent takeover seems to have breathed new life into the old manufacturer through the development of in-house calibers, and the reintroduction of decades-old models from the depths of Zodiac’s back catalog. Among the models that have been reintroduced is the Super Sea Wolf, originally released in 1954 as a no-nonsense line of watches to be used as tools by underseas adventurers.

Beginning in 2015, this newly reimagined catalog of Super Sea Wolf models started to be made available through various channels in rather limited production runs. Although difficult, it is still possible to find examples of certain models on the secondary market for those with enough patience and resolve. For many die-hard fans, the extra work is well worth the effort. 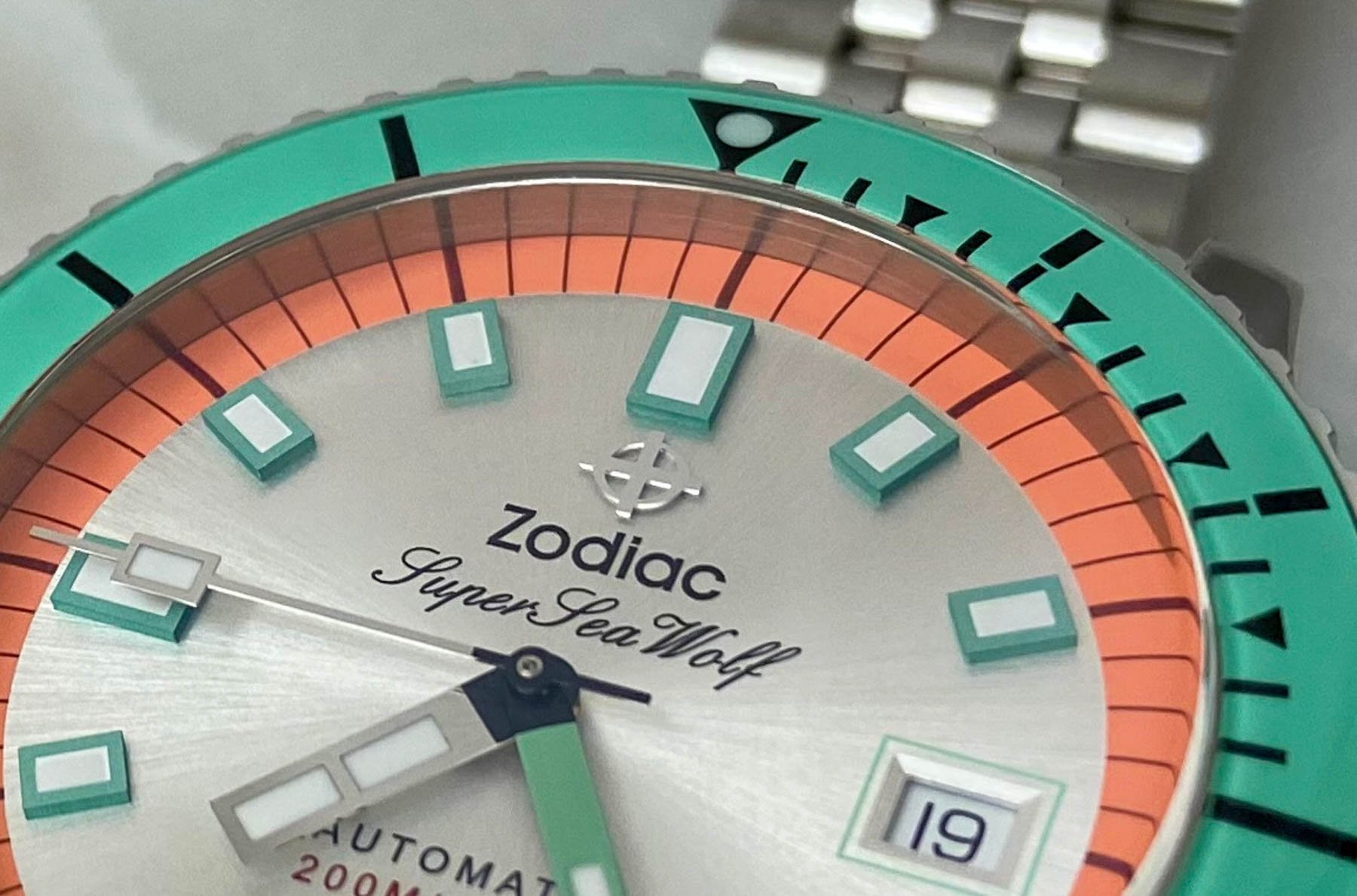 The most distinctive element

The most distinctive element shared by all of these models is the striking use of bold colors and creative color combinations. In a horological world where established brands can often be seen as overly conservative and cautious when it comes to introducing new design elements, Zodiac has been able to inject a whimsical sense of fun and exuberance into its reintroduced offerings. 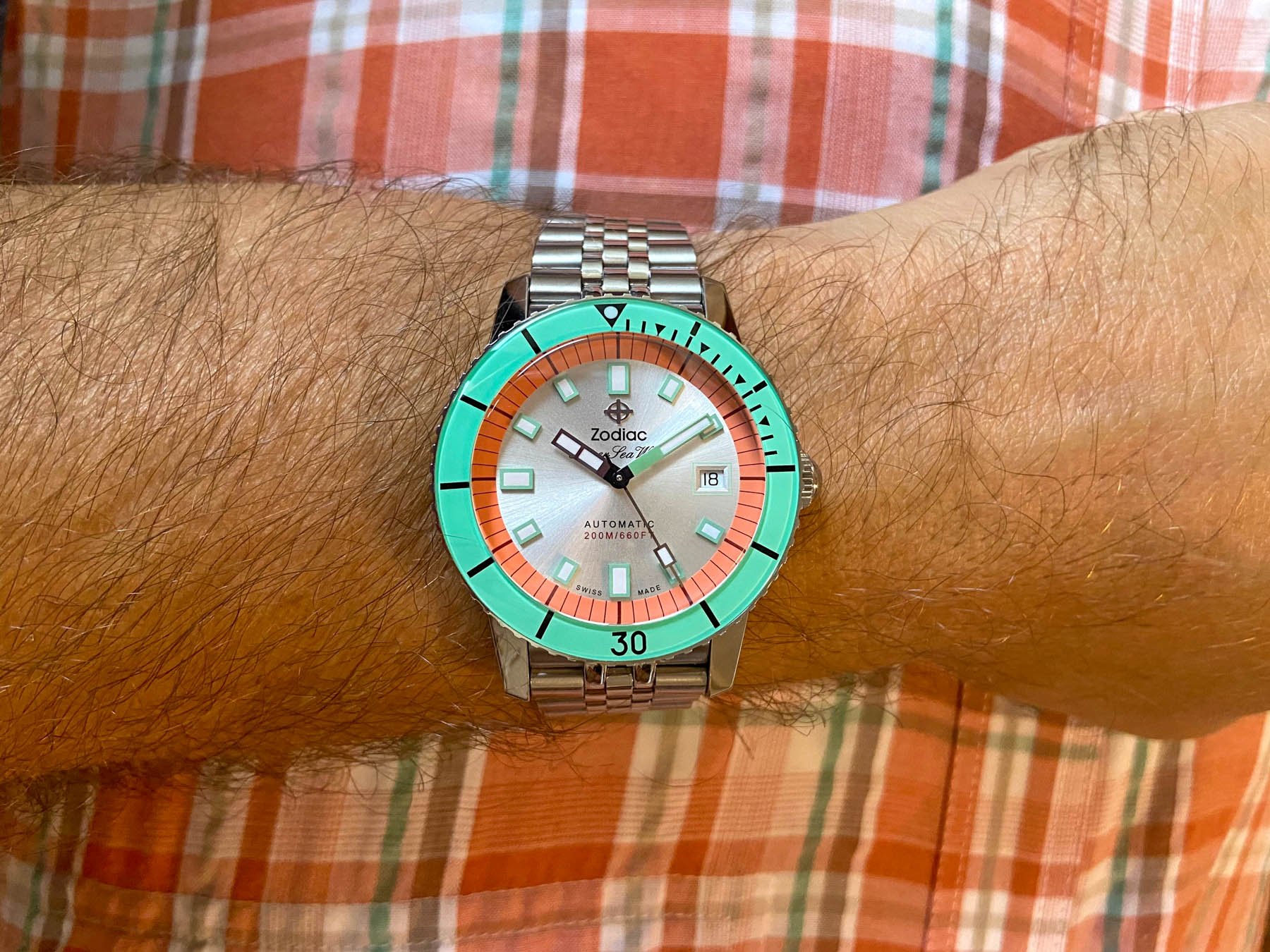 While the watches themselves carry model designations that are ironically mundane such as ZO9403, ZO9270, and ZO9269, most of the individual pieces within the Super Sea Wolf line have received endearing nicknames like the Sherbet GMT, Creamsicle, and perhaps the most daring of them all: the Watermelon. 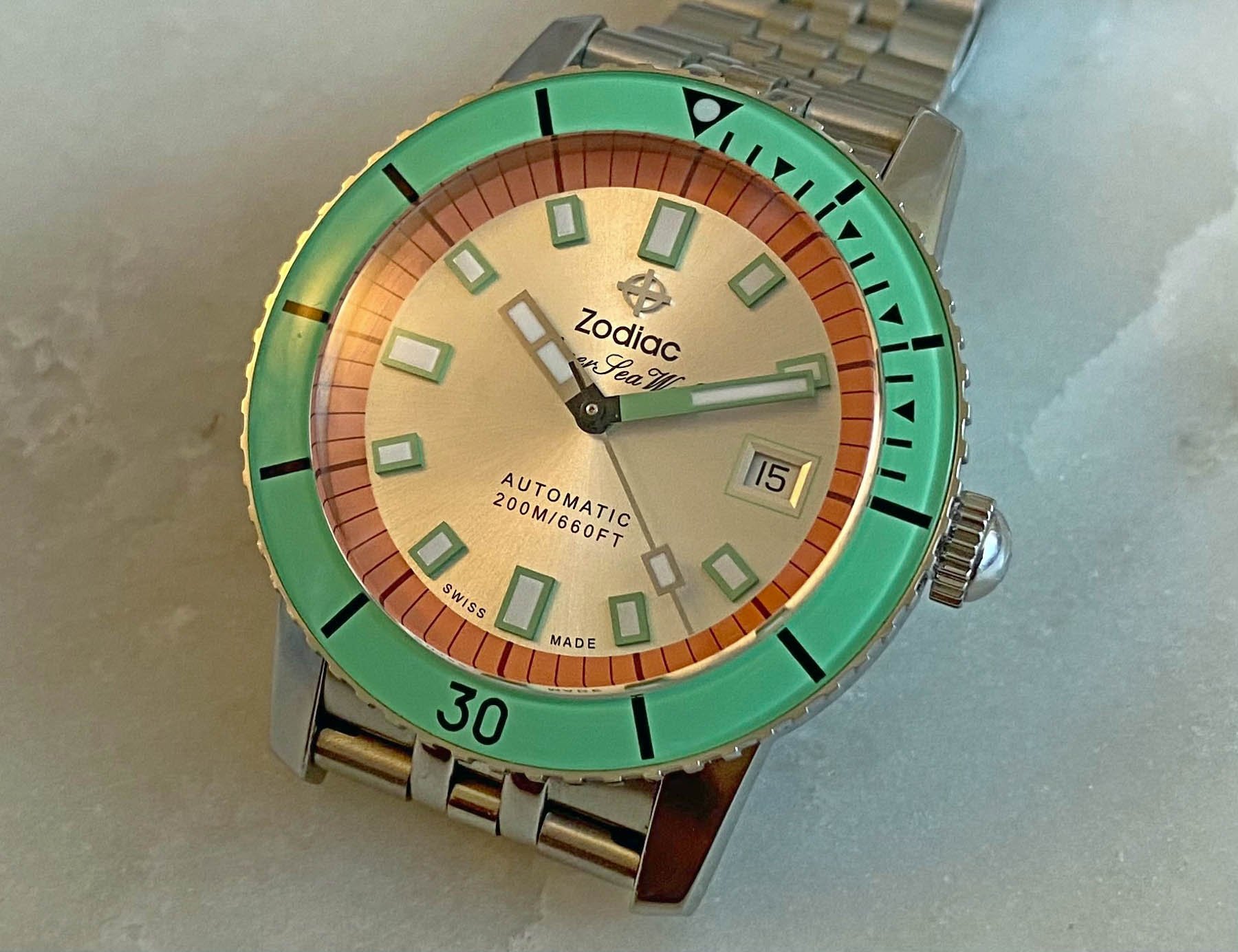 Although the Watermelon gets its nickname from the familiar summertime treat, the unique color combination — somewhat reminiscent of the Miami Dolphins uniform — is actually inspired by a vintage dive mask, made popular in the 1960s and ’70s that was constructed of green rubber with orange trim. 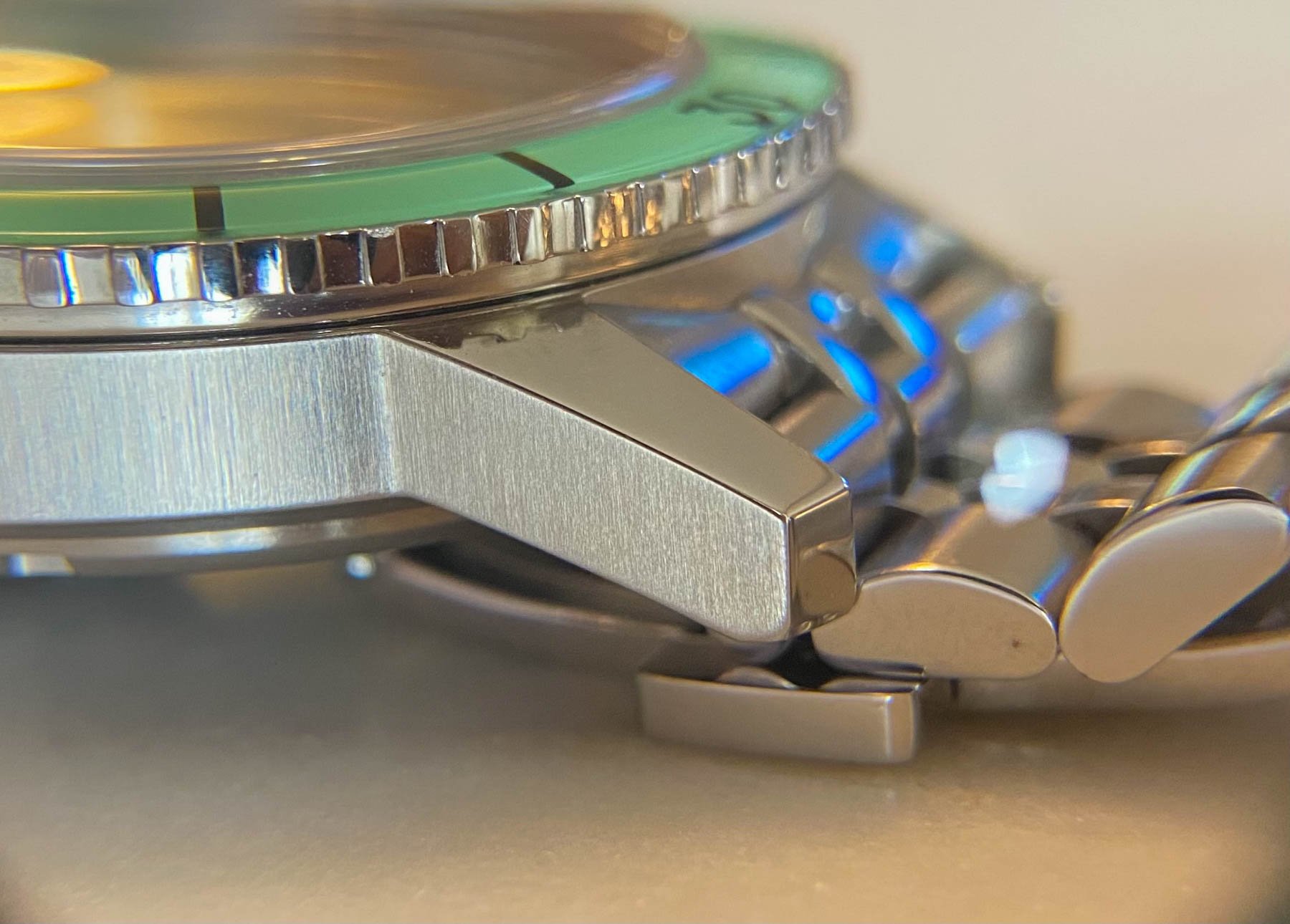 In addition to the visually striking colors that have become the hallmark of the SSW family, the incorporation of mineral glass-capped bezels È used to mimic the old Bakelite designs — creates an intriguing, candied look when combined with the bright colors underneath, giving the watches an extra pop of pizzazz. 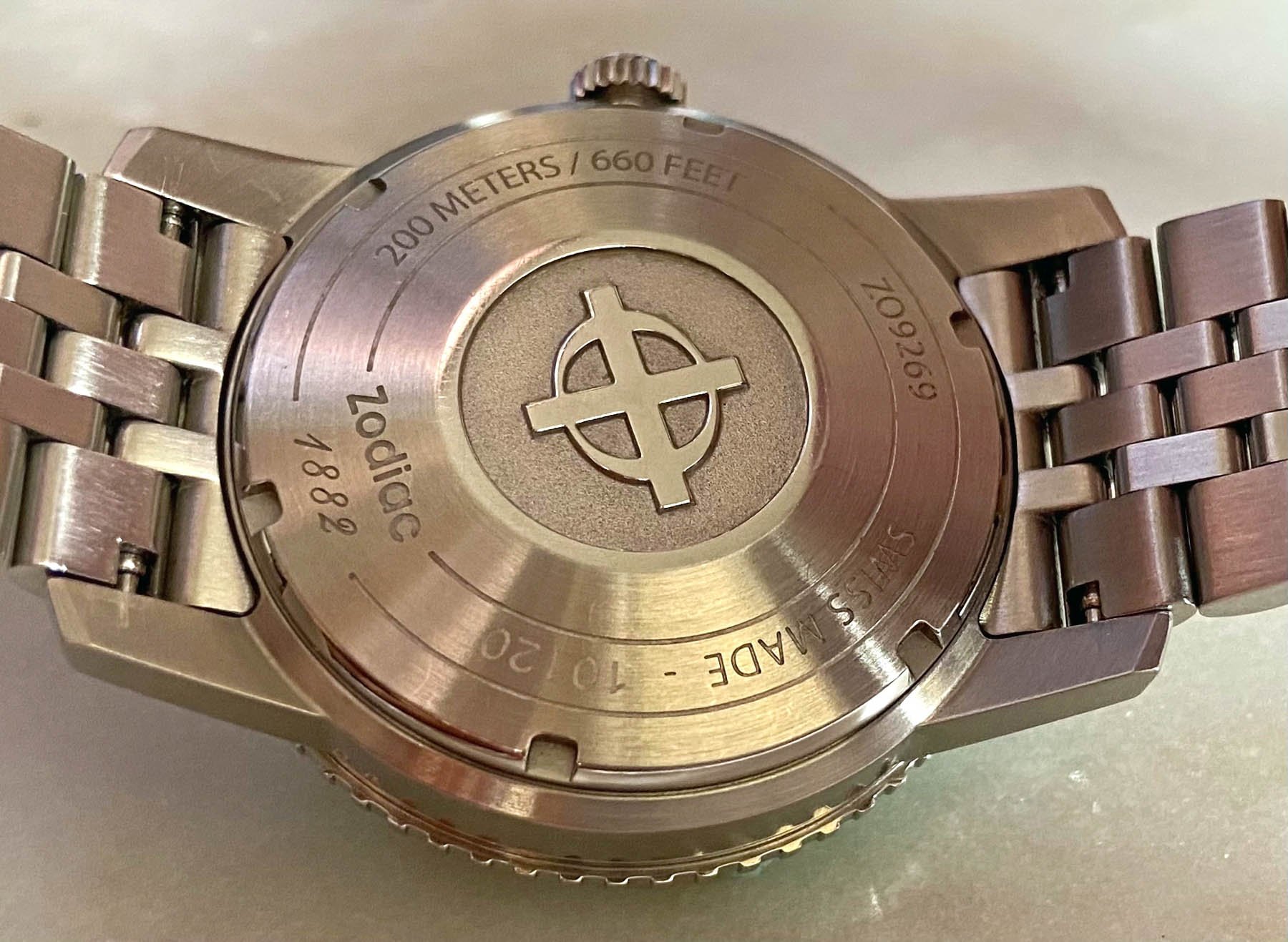 As for the watch itself, the ZO9269 Watermelon measures in at 40mm without the crown. The straight lugs are a bit on the longer side, yet possess a graceful downward curve, allowing the watch to sit comfortably, even on smaller wrists. The uni-directional bezel gives 120 confident clicks, and once set to the desired location has very little play. The case itself features attractive finishing and shows thoughtful attention to detail, as evidenced in the juxtaposition between the polished lug tops and the vertical brushed finish of the case sides. The screw-down crown which is signed with the Zodiac logo helps to secure the stainless steel case, which sports a water resistance rating of 200 meters, as did the original models from the 1950s. 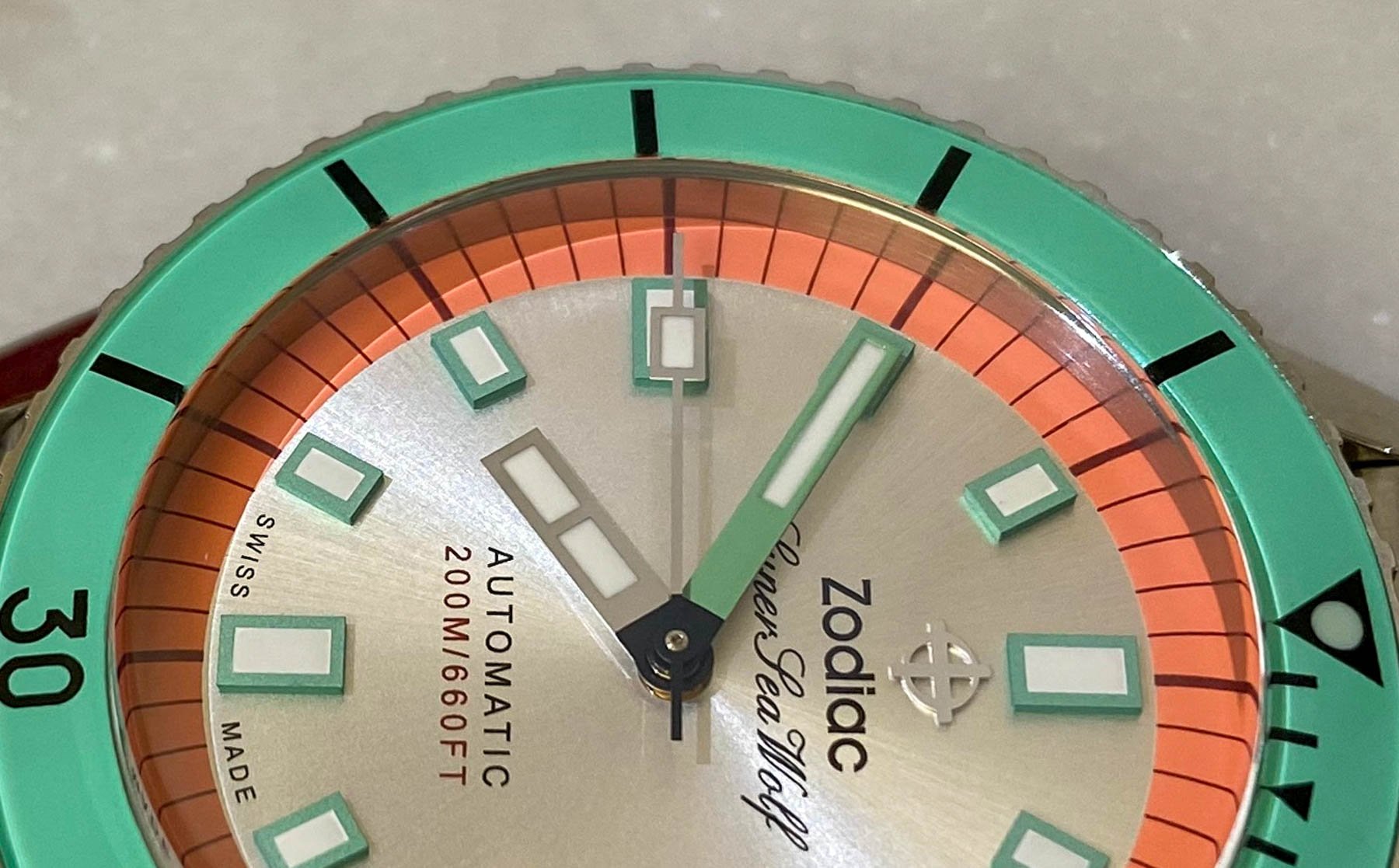 The elements of the dial are varied and diverse, yet very well thought out. This allows the design to blend together nicely and create an ultimately harmonious whole. The main stage of the dial, upon which all the other actors assemble, is done in a beautifully silvered sunburst that radiates light in different directions as it moves. The eleven applied markers take their places along the periphery. These indices feature borders in the same sea-foam green as the bezel. Also present is the silvered Zodiac logo, tastefully affixed just below the 12 o’clock marker. The date window is located at the 3 o’clock position and is also thoughtfully bordered by a thin green frame.

In another interesting contrast, the hour and second hands are silvered while the minute hand is done in the same familiar green. Both are blocky with squared angles that are reminiscent of Lego pieces. They seem to embody a deep art brut aesthetic that Le Corbusier himself would surely admire, all the while echoing the Sea Wolf’s original role as a utilitarian dive tool, rather than a watch to be worn merely as a fashion accessory. The entire handset, the indices, and the bezel pip are treated with C3 Super-LumiNova which does an adequate job of providing after-dark illumination. 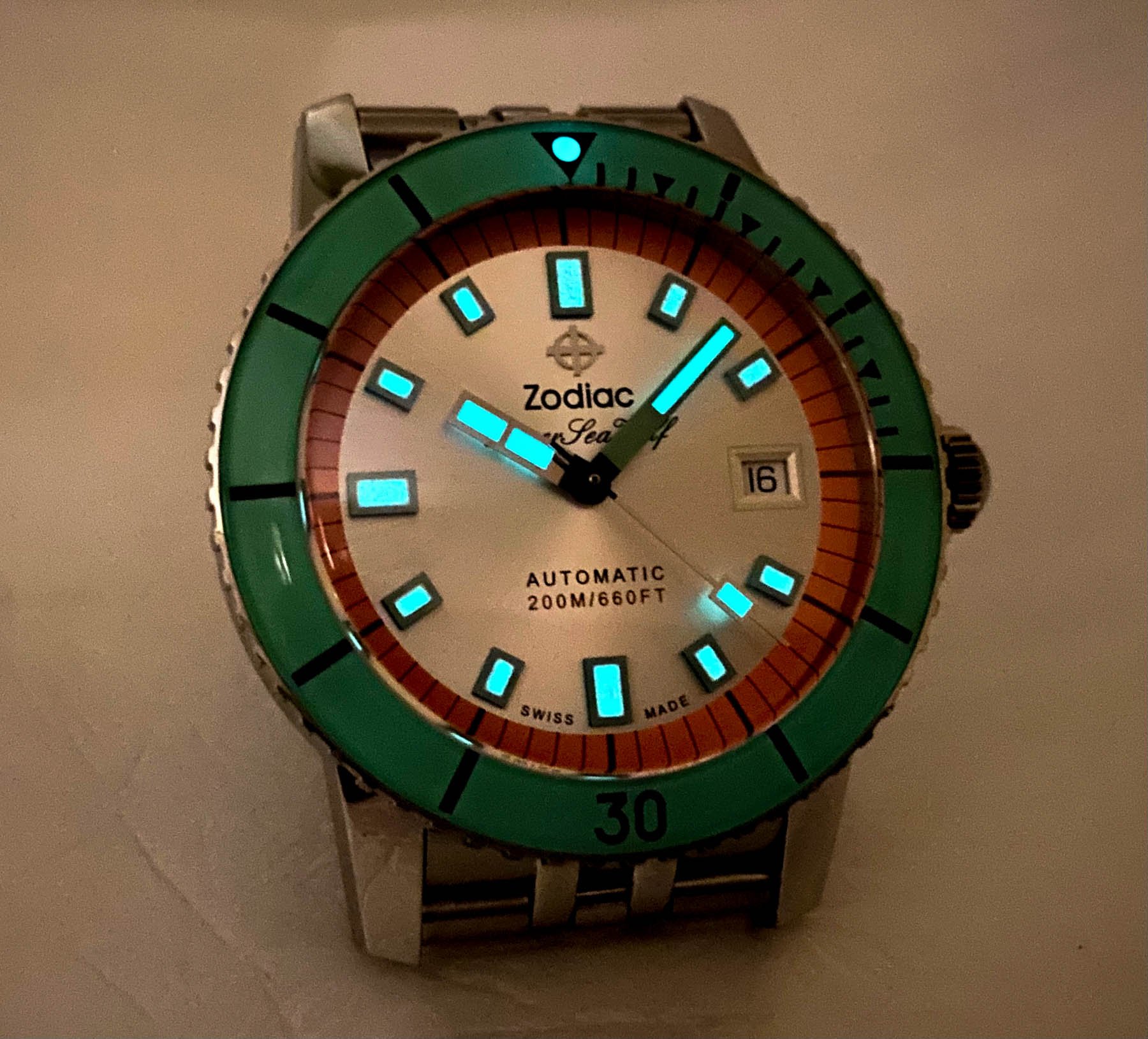 The two non-primary colors of the dial present a challenge for any reviewer when attempting to describe them. In addition to the light, sort-of-teal green, the next cheerful color to make an appearance is the orangey/pink of the chapter ring. When combined with the candied effect of the bezel, it creates an image that often draws a smile. One consideration that should be noted, is that any wearer of this model will need quite a bit of luck trying to match it with anything in their wardrobe. And yet that seems to be the entire point of the ZO9269 Watermelon. It’s supposed to stand out, get noticed and just be an all-around fun watch to wear. 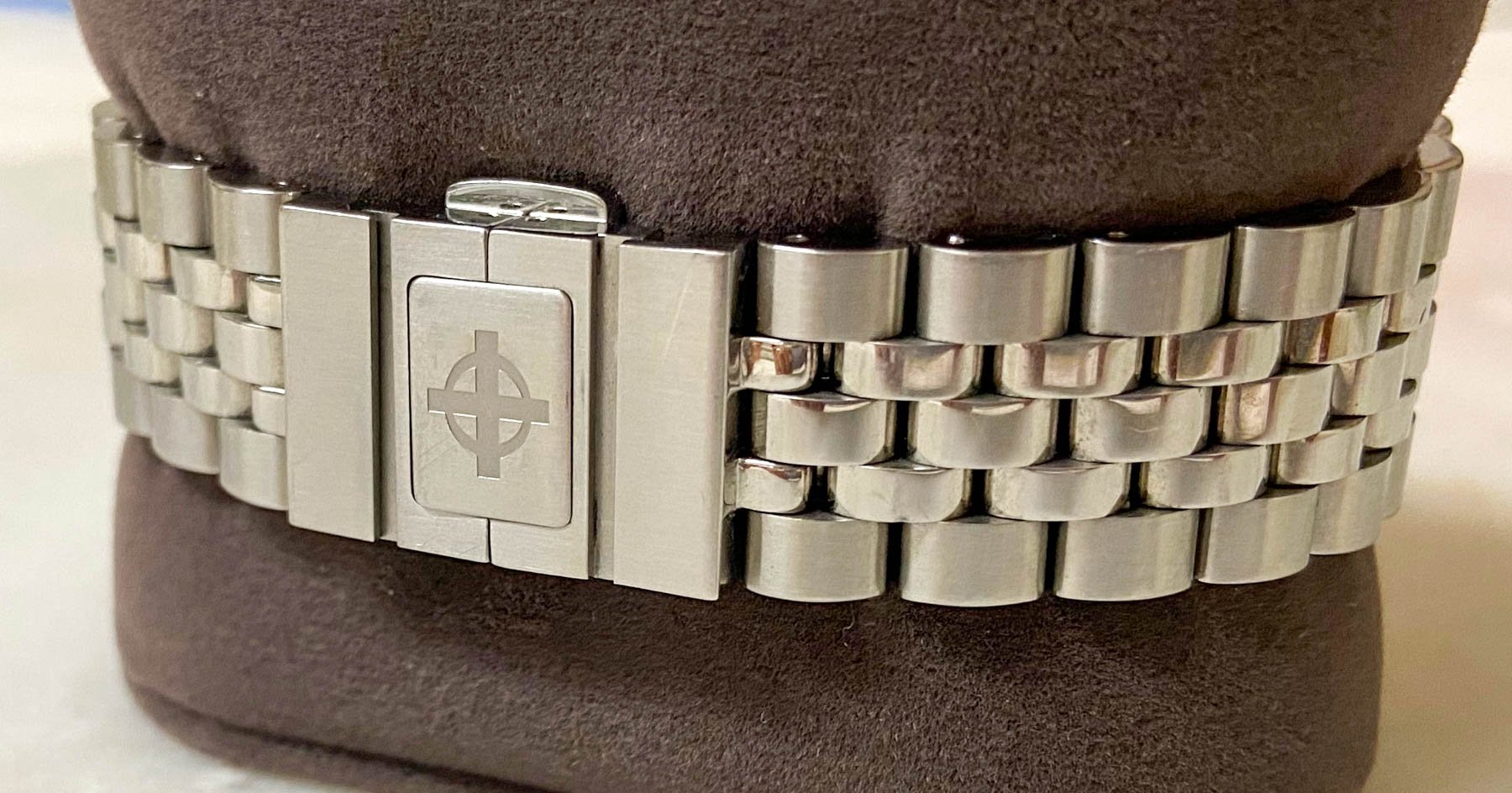 The Jubilee-style steel bracelet reflects the watch case itself in its contrasting finish. The outer links are brushed while the smaller, inner links are polished. The links themselves are all solid stainless steel and the bracelet comes together as a whole to feel very supple. It conforms effortlessly to the wrist. The bracelet also incorporates a clever spring-loaded clasp system, thereby eliminating the need for a micro-adjust system. 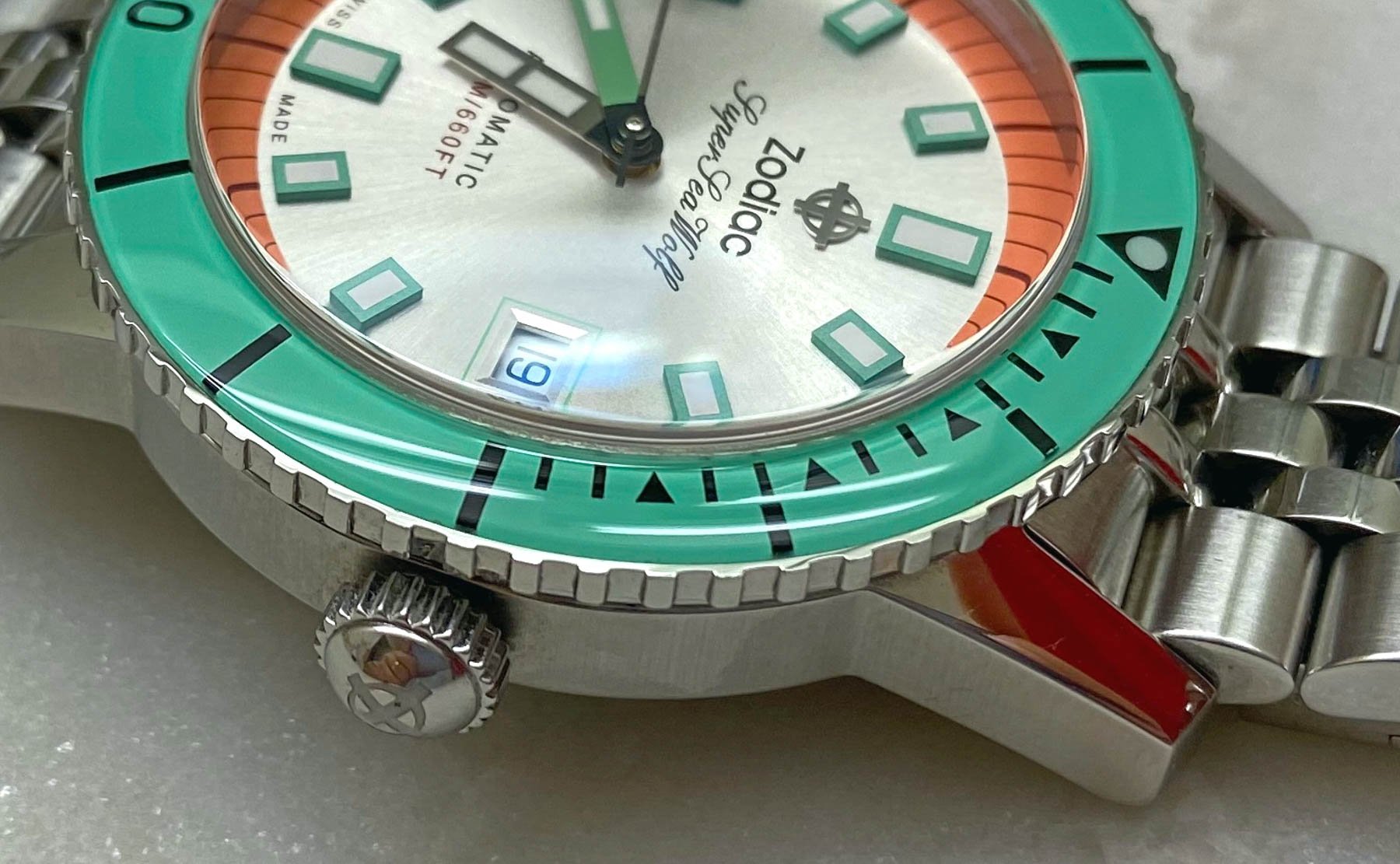 Beating away within the watch is the caliber STP 3-13 automatic movement. This movement was developed by Swiss Technology Production. STP is also owned by Fossil. This movement can also be found in a number of other timepieces. It, and its brand, are becoming increasingly popular among microbrands. Released onto the market in 2016, the 26- jewel STP movement is similar to an ETA 2824-2 with one additional jewel and a swan neck regulator. 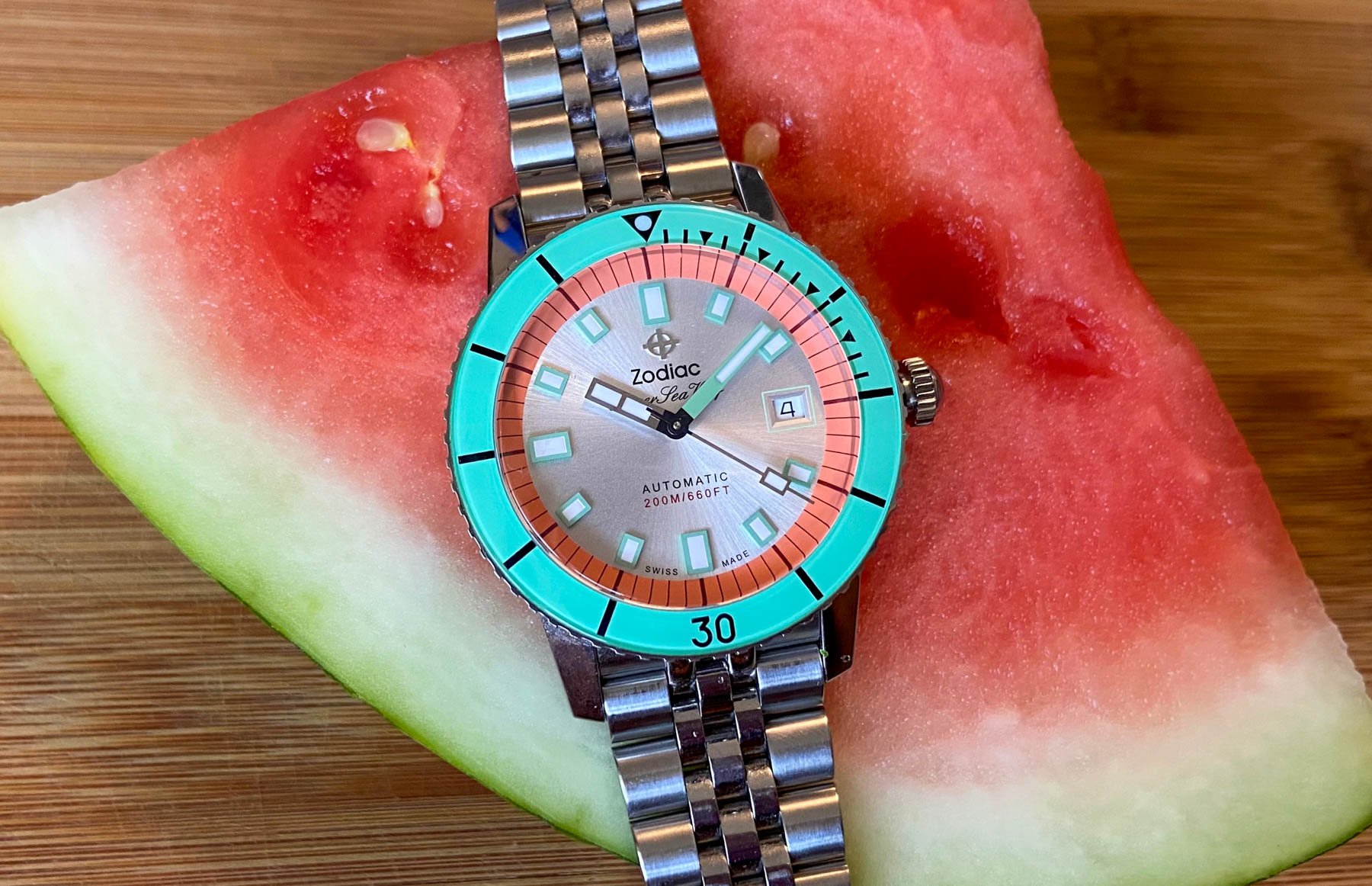 In the two months of ownership, the movement in mine has been running well on the wrist and the accuracy has been very good. There is a slight roughness that can be detected when hand winding the movement but that does not seem to affect its overall performance. It should be noted that some of the offerings in the Super Sea Wold line, such as the ZO9403 GMT model, utilize the ETA 2893-2.

After having had the opportunity to wear the Sea Wolf for some weeks now, it is impossible not to be reminded that watches — like all things in life — must be enjoyed while taking the good with the bad. John Denver sang of how sunshine on his shoulder always made him happy, and in much the same way, the Zodiac Watermelon accomplishes the same. It is the rare watch that somehow manages to capture that bright cheery sunshine and put it right on your wrist, and with every glance, never fails to bring a smile.

Eric Gregoire is a long-time collector and frequent writer on all things horology. His latest book, “Eternal Springs: An Introduction to the World of Mechanical Watches” is available exclusively on Amazon here.