Just recently, I was in Dresden to celebrate the 20th anniversary of A. Lange & Söhne’s Lange 1 watch and the introduction of the Lange 1 Tourbillon Handwerkskunst (more here). A few weeks earlier, A. Lange & Söhne introduced five sets of Lange 1 watches during the Watches & Wonders exhibition in Hong Kong. 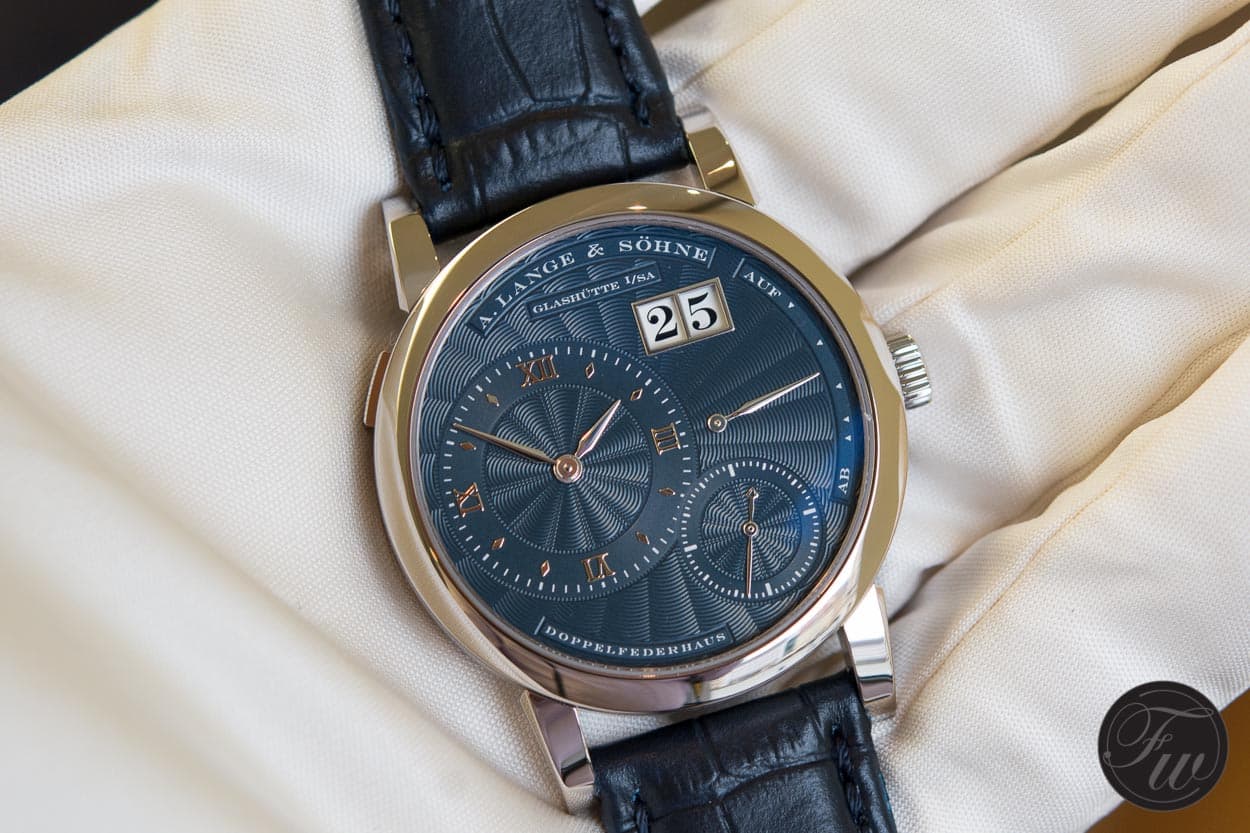 These five sets of A. Lange & Söhne Lange 1 watches are limited to 20 pieces each, a number that corresponds the 20th anniversary of the Lange 1 watch itself. Each set contains of a watch for him and a watch for her. The latter one is set with 64 diamonds in the bezel, all Top Wesselton VVS quality.

The gents versions have the normal 38.5mm diameter size and the ladies watches come in a 36.1mm diameter case.

The Lange 1 20th anniversary watches are be available in a several combinations:

Inside, A. Lange & Söhne’s caliber L901.0 movement has been fitted and shows the limited number of 20 pieces. This manual wind movement has the usual 3/4 plate, twin mainspring barrels – making sure you’ll have 72 hours of power reserve – and a beautiful hand engraved balance cock. The movement is – as you can see – perfectly finished.

What makes these five sets of Lange 1 watches so special though, is the beautiful hand-finished guilloché dial on each of them. A wonderful crafted dial executed by the guillochérs from A. Lange & Söhne. It is up to you which version you think is most beautiful. My personal favorite was the white gold case Lange 1 with blue dial. Truly stunning.

Although any Lange 1 would do for me personally, these guilloché dial editions are the icing on the cake. From what I’ve understood during our presentation of these wonders in Dresden, the watches are only available as a set, no separate watches to be sold. The platinum set retails for $122,900.- USD, the white gold for $100,500.- USD and the pink gold is just a bit less than that, with a price tag of $98,100.- USD.

Below, you’ll find the gallery of photos of the Lange 1 20th anniversary that I took. Click the photos for a larger version.

More information on the A. Lange & Söhne Lange 1 can be found on the official website.