Sinn Spezialuhren from Frankfurt is top of mind when it comes to (relatively) affordable tool watches. We have covered Sinn watches many times, since the start of Fratello Watches in 2004 actually. It is no secret that we have a lot of love for Sinn watches and there are a couple of them in our team.

Sinn creates watches where form follows function. That’s a very German thing to do, and certainly not a bad thing if you like the aesthetics of tool watches anyway. Their watches are used by German special police and military forces, and they also created a special piece for the fire brigade. The fire services are a big thing in Germany, they have over 1.3 million(!) fire fighters, most of them are voluntary fire brigades. Anyway, Sinn has a collection called Einsatzzeitmesser (EZM) which translates into ‘mission timer’ basically. These are the watches they developed for specific functions or target groups. For example, their EZM7 was especially developed for the fire brigade to help them keep track of events and details during an emergency.

Of course, they also develop and manufacture everyday pieces for people like you and me. Rugged, water resistant watches, some scratch-free due to innovations like Tegiment treatment and with complications like a chronograph or extra time zones. I used to have a 142.St.S. and I kind of regret selling it. It had the Lemania 5100 movement, which is considered to be legendary and had a black PVD treatment. At the time these watches could be bought new for around 1500 Euro. If you are able to find one at all, you will pay well over 2500 Euro. Luckily, Sinn re-issued the Sinn 142 (II) – with a different movement though – but I kinda prefer to have it with the discontinued Lemania 5100 movement.

Anyway. Let’s have a look at – what we think are – the 5 coolest Sinn watches up to date. You will find a model or two which are discontinued in this list, but not impossible to find either. 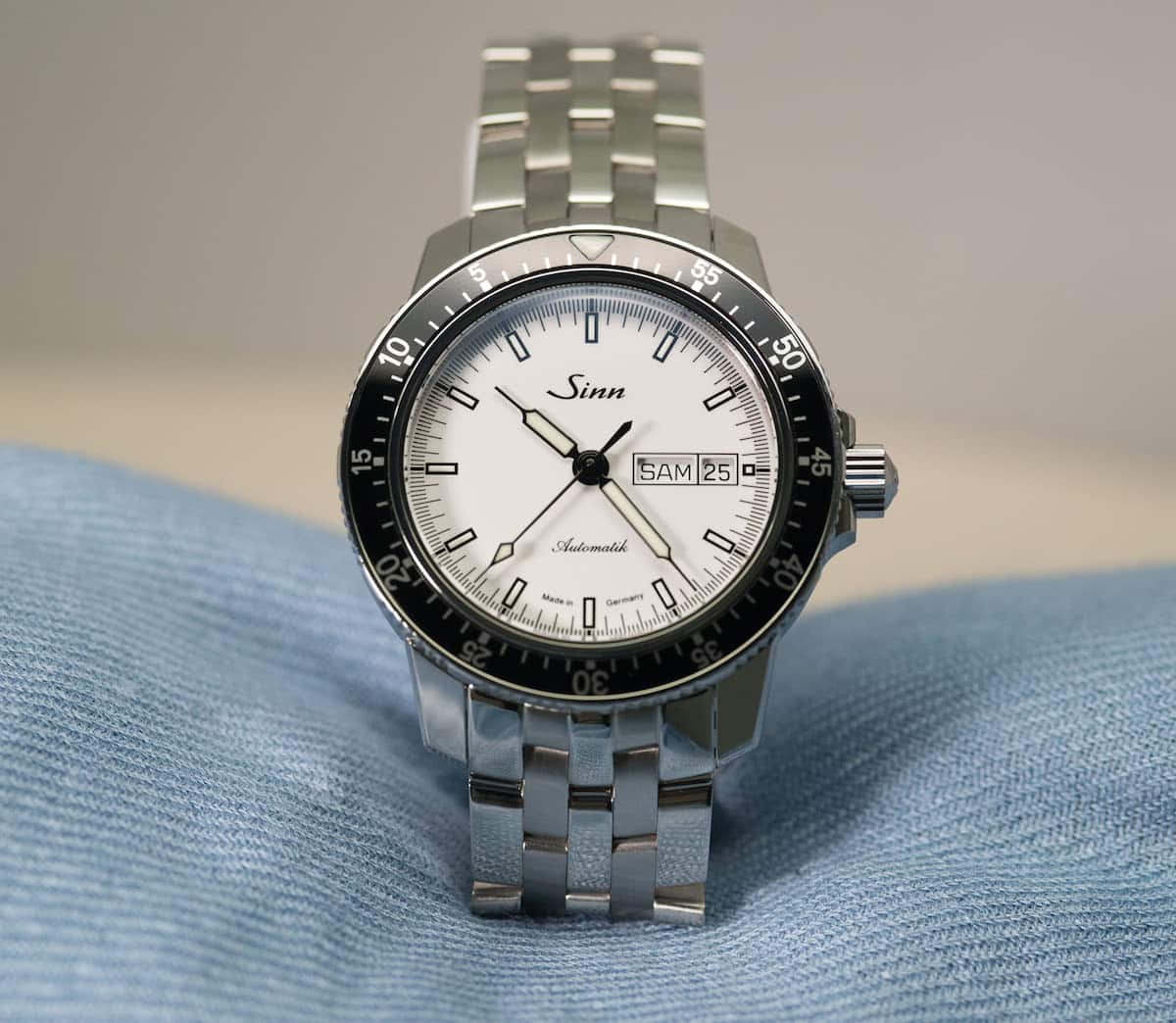 I start with 5 coolest Sinn watches with their reference 104. It is a basic three-hander, with a day-date complication. A non-nonsense watch, with 60-minute scale bezel to be able to time events. This 41mm stainless steel watch has been equipped with a Sellita SW220-1 movement, has a water resistance of 20 bar and is compliant with three German so-called DIN standards (Germans don’t trust ISO). One for anti-magnetism, shock resistant and the third for being water resistant. The sapphire crystal is has this double anti-reflective coating and the sapphire case back has been single coated. This watch is also available with a white dial. Price starts at €1090 for the 104 on a leather strap. Add €260 for the stainless steel bracelet. 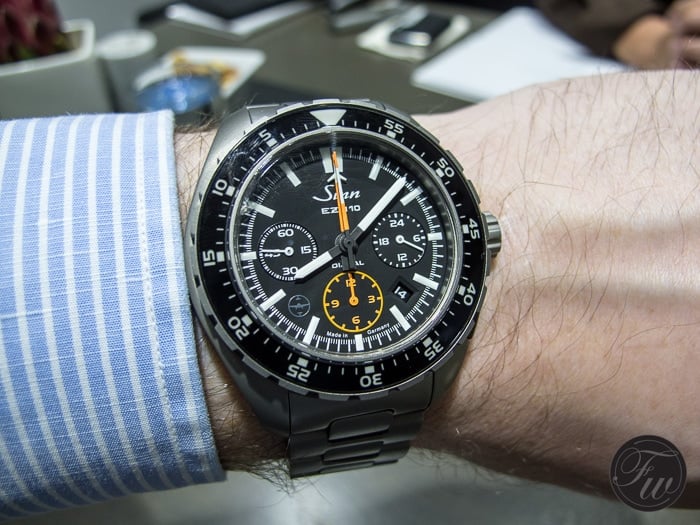 This is a professional pilot’s chronograph, packed with innovations. The EZM10 is quite an impressive watch when it came out, and still is. This 46.4mm diameter watch is made of titanium and received the Tegiment treatment. This special treatment ensures a scratch-free surface, and it definitely is. Sinn made me try to scratch a tegiment case with a screw-driver, and no matter how hard I tried, not a single mark. Sinn’s EZM10 uses the caliber SZ01 movement. This is basically a modified ETA/Valjoux 7750 movement. Not only did Sinn change the lay-out of the chronograph hands, they also added a centralized chronograph minute hand. They used the discontinued Lemania 5100 movement as inspiration to do this. The movement also has DIAPAL technology, which is a lubricant free anchor escapement. Sinn’s Ar-Dehumidifying Technology prevents the watch from fogging up and their temperature resistance technology will ensure the EZM10 still functions at temperatures between -45 °C and +80°C. This watch does not come cheap (at least for Sinn’s standards), but not without reason as you can read above. The list of specs goes on and on, and can be found here. Prices start at €4580 for the version on leather strap. 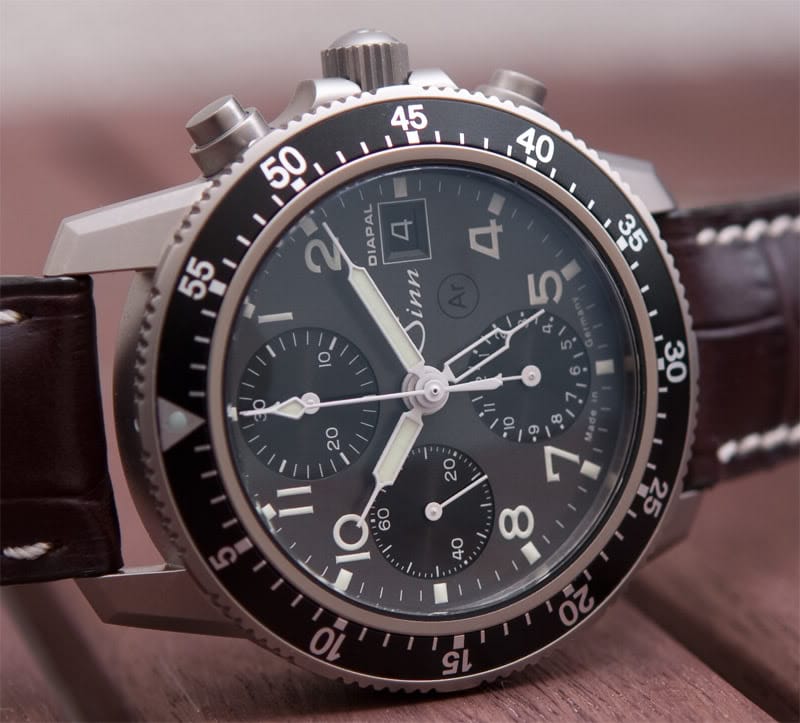 Sinn’s 103 is – in my opinion – one of their classic pieces. Powered by an ETA/Valjoux 7750 and having that typical dial lay-out. Bi-directional bezel for timing purposes, with a 60-minute scale. It is a hardcore pilot’s watch, basic functionality. For the standard version that is, which even comes with a plexi crystal. An additional €350 needs to be added for a sapphire crystal. It means that the basic version on a stainless steel bracelet – and with sapphire crystal – sets you back approximately €2000. However, Sinn has a couple of version of this watch, including one with DIAPAL technology (see EZM10), a titanium version with DIAPAL (as pictured above) and even a TESTAF version in titanium. The latter one has been tested and certified against yet another German DIN standard, especially for pilot’s watches. This one is a bit over €2600 with a stainless steel bracelet. I might just prefer the most basic version of them all, with a plexi crystal and leather strap, which sets you back €1550. Very hard to beat. 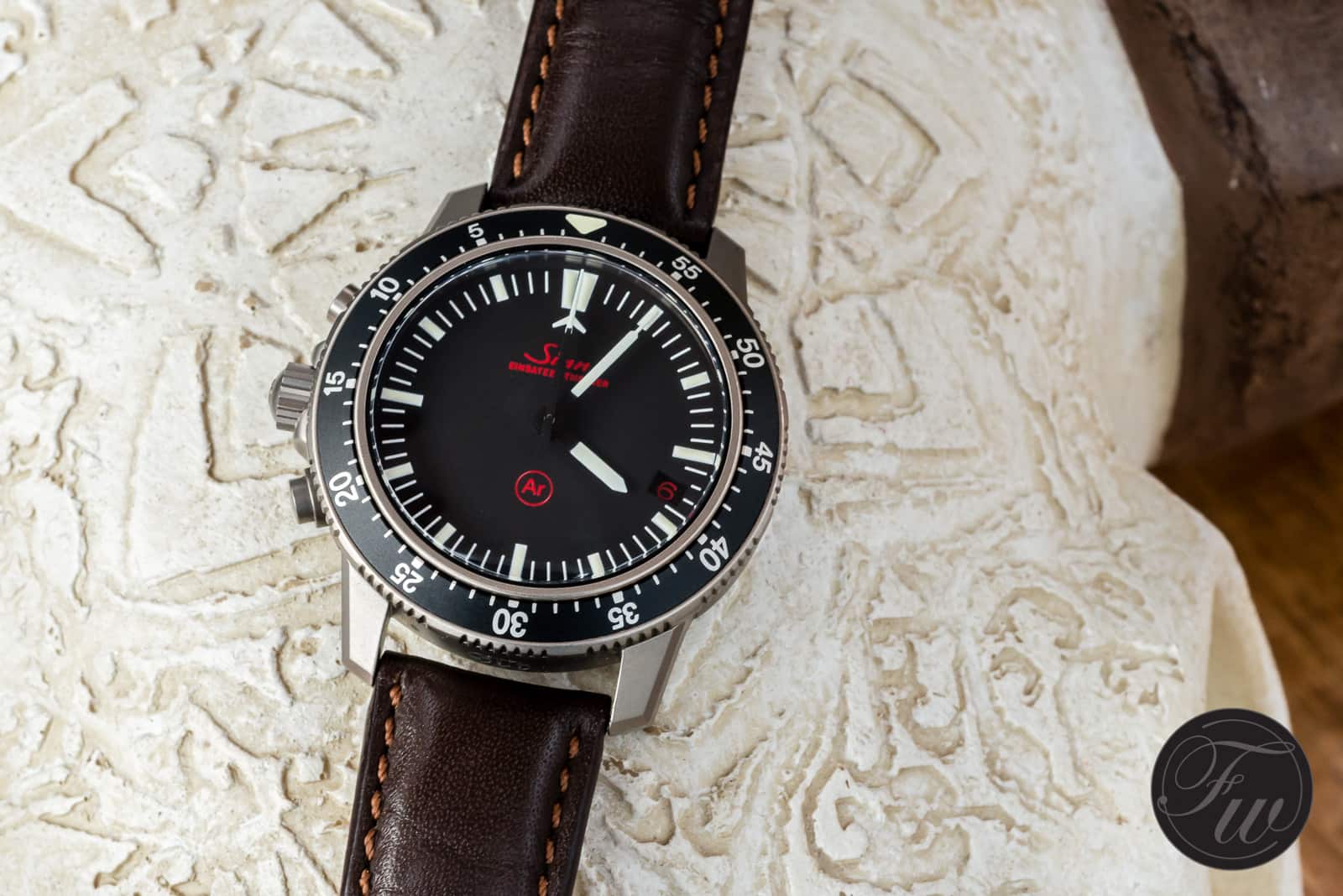 Unfortunately discontinued, but the first Sinn ‘mission timer’ or EZM is simply stunning. Our editor Gerard called the EZM1 his ‘ultimate Sinn’ in his article about it here. This watch was originally designed for German Customs Forces, and came on the market for public in 1997. The first models have tritium lume, and from 2000 until its discontinuation Sinn used Super-LumiNova. The movement inside is the Lemania 5100. The dial doesn’t reveal that this watch is actually a chronograph, but it really is. The chronograph hands for the seconds and minutes are centered, so on the same axis as the normal minute and hour hands. It was the first watch with Argon gas filling, the first watch with the crown on the left side, and the first watch with the dark red printing and date indication. The matte titanium case is simply stunning. When Lemania ceased the production and delivery of the Lemania 5100 movement in 2004, this watch was also cancelled. However, in 2008 there was a short re-run of the EZM1 but only limited to 250 pieces. Last year, there was a run of 500 pieces of the EZM1.1, equipped with their SZ01 movement. Good luck finding a nice EZM1 and if you find one, expect to pay a lot. There is one EZM1.1 currently on offer on C24 for just below €6000. 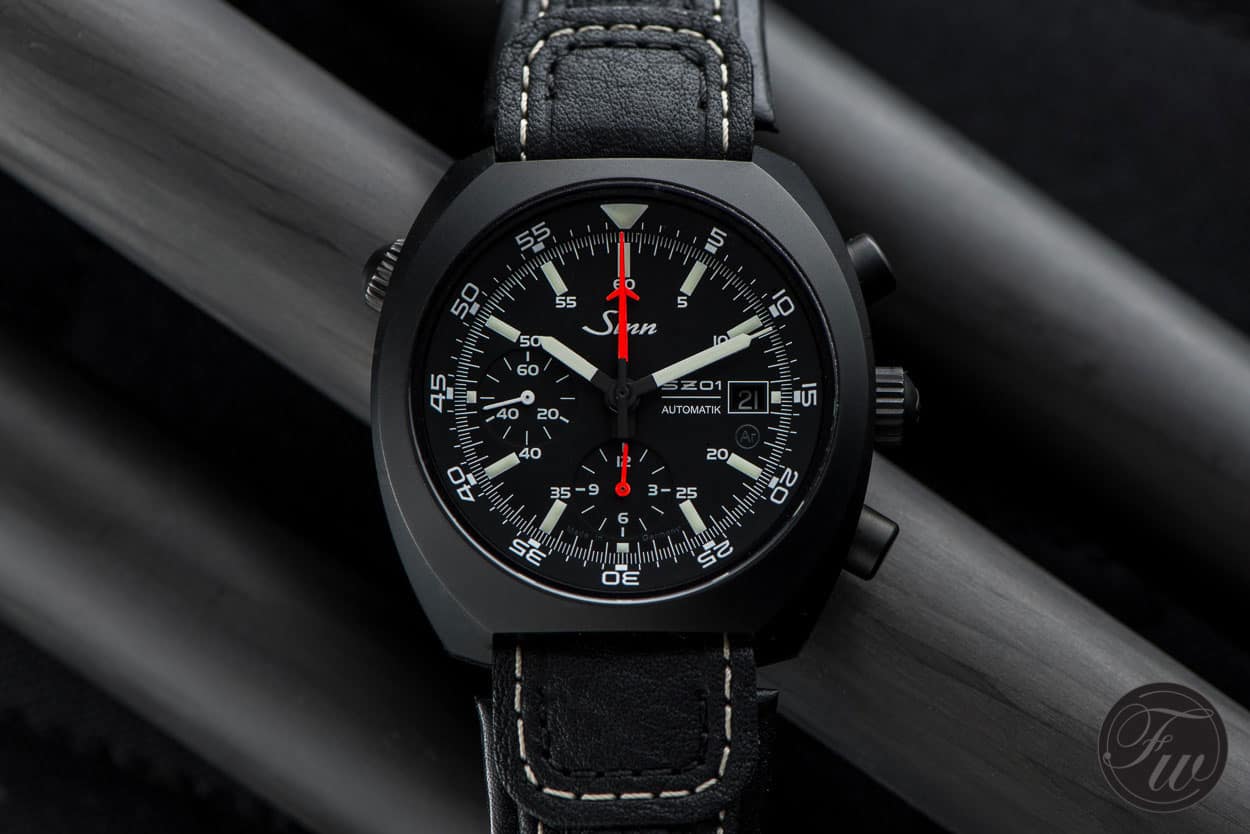 The watch that astronaut Reinhard Furrer took with him on the D-1 Spacelab mission in 1985, also known as the Spaceshuttle STS-61-A, Sinn’s reference 140. This resulted later on in the Sinn 142, powered by the aforementioned Lemania 5100. Just like the EZM1, when this movement was discontinued, so was the Sinn 142 (which came in stainless steel and in a black coated version). Because of that, Sinn offered the Sinn 142-II, powered by their altered ETA/Valjoux 7750 movement with classical ‘5100’ lay-out. This model has been discontinued not too long ago. Today, Sinn offers the 140. This model refers to the original 140 that Furrer wore in 1985 and Sinn calls it therefor their ‘Weltraumchronograph’, freely translated into ‘space chronograph’. The original 140 was powered by Lemania’s 1342 caliber, and constructed the Sinn caliber SZ01 (ETA/Valjoux 7750 based) movement in such way, that it copies that specific lay-out. Slightly different from the Sinn 142 (or Lemania 5100) dial. The 140 comes in stainless steel (Tegiment treated) and in black, starting at €3750 for the version on leather strap. However, there’s currently a 10-week delivery time on these. The original 140 and 142 references can be found on the pre-owned market, expect to pay between €2000 and €2500 for one of these in nice condition. More if the condition is good and when there’s box and papers that come with the watch.

More information can be found at Sinn on-line, including the possibility to order their watches on-line.